No more catch up blogs. I am here now in real time.

I woke up this morning and I was thinking about painting those snowflakes that I made with the grandkids... (See yesterday's blog for instructions)

But then I got a better idea.  Instead --- I GLAMMED them up with GEMS! 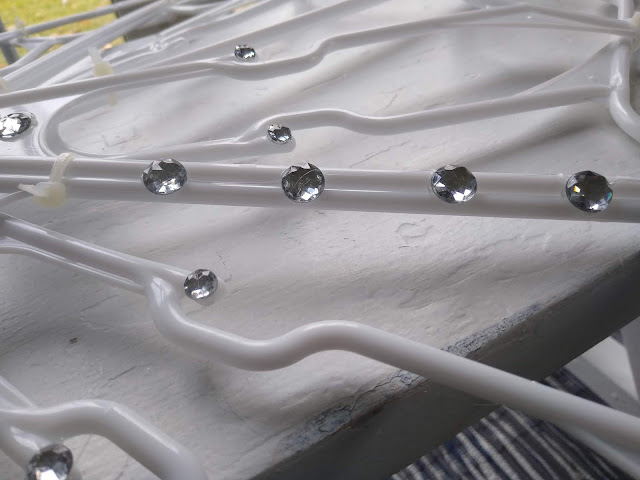 I got out my little glue gun and a container of silvery multi-size gems that I had bought a long time ago. Glad I had saved them. I'd considered tossing them when I was purging, during packing to move. Sometimes it's good to have a stash of supplies waiting around, even if you don't know quite what you are saving them for. 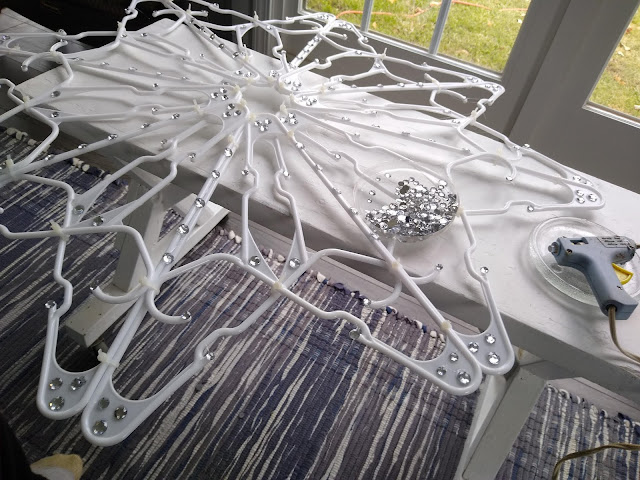 I put little dabs of glue at various intervals and added different assorted sized gems. I had to do both sides of each of the snowflakes because these will rotate. It was a soothing fun project to do. Then I got a wisp of nostalgia rolling in. I wished my mom was sitting there next to me, gluing them on with me. This is just the type of project she would enjoy doing. But, she is far away in Florida. I'm going to have to think up some other projects to work on with her, the next time we see each other.  We chat back and forth on the internet every day. But sometimes it's nice to be sitting here in person. Mom and my sister Linda and I were ALWAYS working on craft projects of one kind or another. Sigh.


Once the snowflakes were done I brought them outside and hung them back up on the porch. Our neighbors all up and down the street had begun decorating with lights. It was strangely warm enough outside, over 40 degrees.  I guess it was a good idea to get it done before the cold sets in.  So I broke my own rule about waiting until after Thanksgiving...

Out came some garland and lights. I had to move the red bows over into new positions for this house. They had all been pre-wired onto the scallops to be perfectly spaced out for the last house.  Now they will be prewired for this house. Easier to put them up next year.

There was just enough garland to go across the front railings on each side. 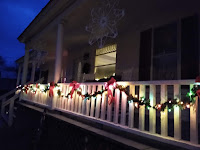 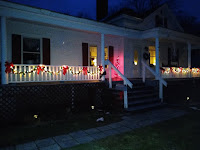 My 2 little handsome snowmen wanted to come out to play. Even though the little bit of snow we got last week has melted. I nestled them in among the dried flowers in the front flower bed and plugged them in. 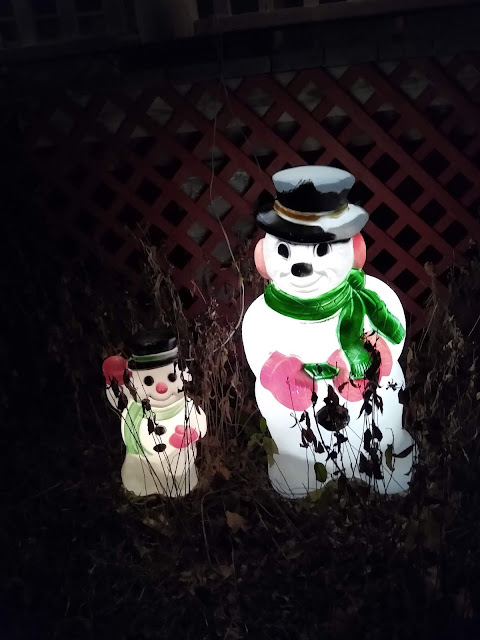 I also found this cute little red tinsel tree at the ReStore last week. For $3 that silly thing had to come home with me. I set that up in the corner between the two levels of front porch. 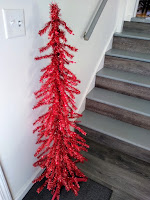 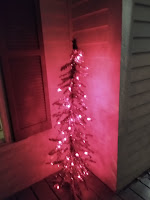 My three pretty snowflakes don't really show up at night time. I do have some extra lights and garland and I think I will do a row around the top of the porch. Maybe then the lights will shine down on my snowflakes? 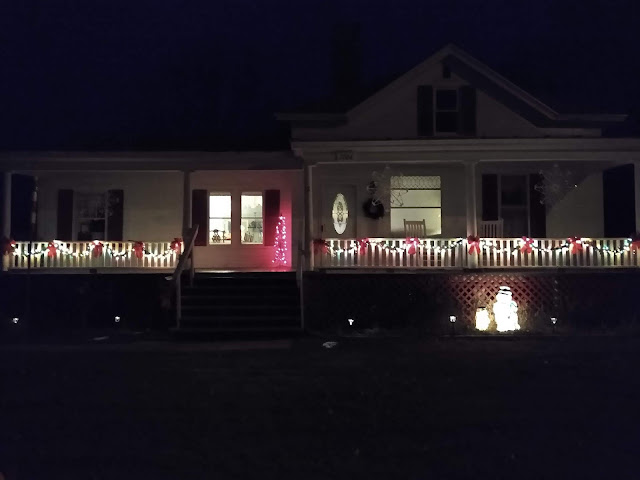 Steve is still under the weather, I will wait a day or two until he can help me dig around and find the correct Xmas tote with that extra garland and lights in it.  He put them all up really high after he reorganized the garage storage area.  I can't even reach unless I haul out a ladder, to even get up there to read the tags on the totes.

While he is still down and out with this sinus thing, I decided to finish weaving up this 10 ft runner and get this batch of rugs off of the loom. 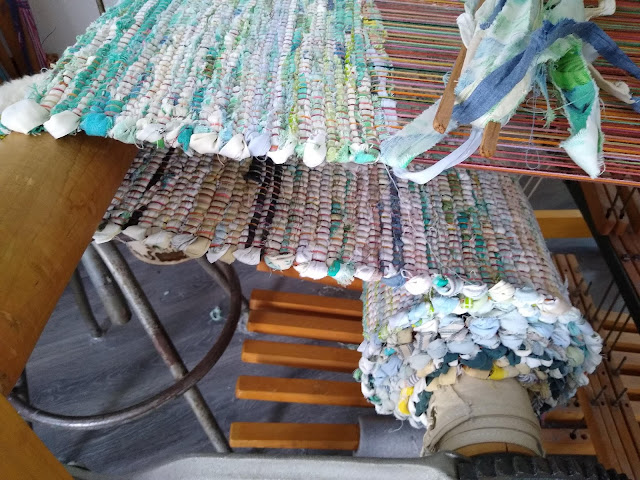 Some of the grandkids had helped me weave these rugs, and they asked if they could watch them get unrolled. They are at school today so I decided to make a little YouTube video of how I unrolled the rugs. Now they could watch the video and maybe next time they can be here for the big rug unrolling after the next batch is done.


Here are the rugs that I finished: 2 four foot ones and a 10-foot one. I still have to complete the hems by folding over the the beginning and ending header sections. I use my Grandmother's old Singer machine to stitch them down securely for a nice flat hem and add my personalized tags. 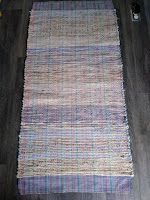 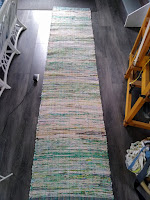 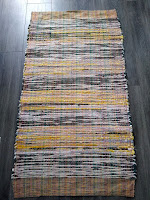 Steve has been moping around most of the day feeling totally miserable. Moaning and groaning and feeling like crap. We have a doctor appointment on Friday for a general check-up so if it hasn't cleared up by then we will see what they can do. I told him to stay in bed. I've been dosing him with homemade chicken soup, juice, and other comfort foods--- like chocolate chip mint ice cream sandwich bars!

It's hard to keep him down. He did disobey me for a little while and finished laying these last six squares of ceramic tile. (on the far right). The only thing left is to take two of them somewhere to have them cut in half so he can put the last four half pieces into place. 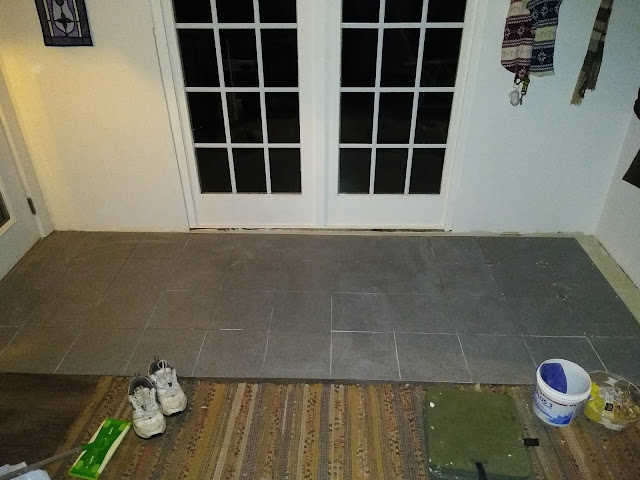 I told him he is not leaving the house!  He wants to go rent the tile cutter at the hardware store, bring it out in the parking lot, cut the two tiles, and bring it back in again.  I said tomorrow is another day.

Once he is finished with the last four half pieces, then I can do the grouting in all of the cracks. He said that is my job. Kinda like painting, he hates grouting. When that is dry, then we will be able to finish up the wooden trim around the window and the baseboard.

The final project will be building a triangular closet in that corner. We got a couple ideas. Nothing for sure yet. But it's in the works.


Honestly, this has been about 4 months of a lot of work to complete this room, but it's also been a lot of fun. I did a lot of envisioning and thinking and trying hard to create what was in my head.  Steve was able to make these things come about with hard work and ingenuity. 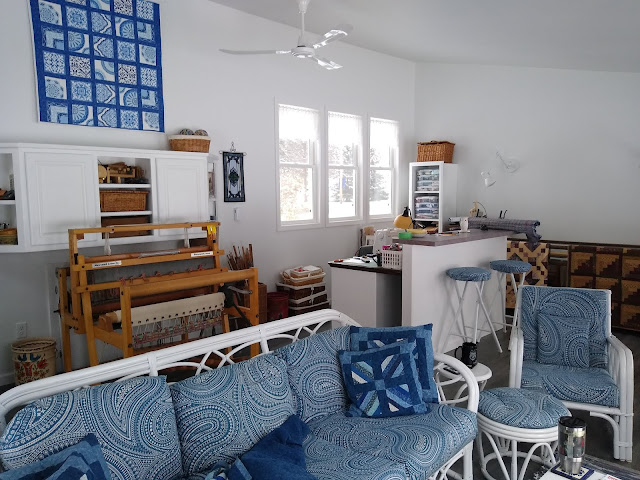 Often I find that I am needing to pinch myself
just to make sure I am not dreaming! 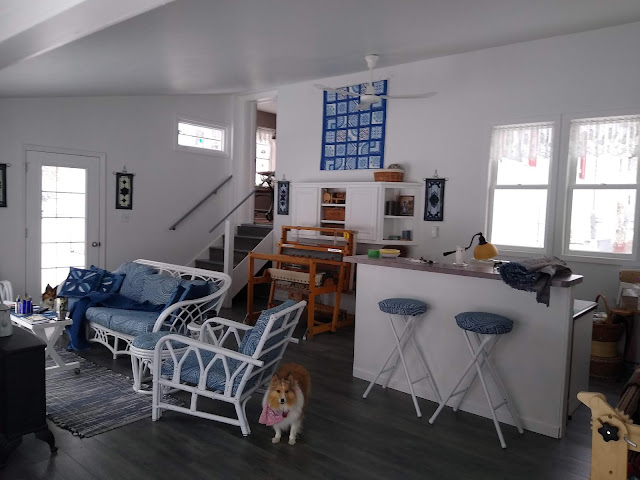 I put on the soft music,

I work on my projects,

and having Steve nearby in the room
as I work on things
makes me really content and happy.

I am glad we are sharing this space.

.
Posted by KarenInTheWoods at 9:12 PM

Labels: decorating the house, dollartree snowflakes, enclosing garage stall to make she shed, finishing the entryway, making a She Shed, making a she shed out of an attached garage