Getting on the Level with the Floor

These blog posts are catching up with the work we did on our she shed in October. This one deals with what we had to do to change a cement garage and mudroom floor into a flat surface to be ready to install flooring!

Seeing as the space we are converting was a single stall garage and a mud room, it just had an average everyday old uneven cement floor. There were cracks here and there, and a big uneven divide up the middle where the two pieces of cement met when it was first poured years and years ago. Now it was up to us to get it all sealed in, leveled, and a subfloor built, ready to install new flooring on top.

The first thing we did was purchase a large 5 gallon bucket of SealBest elastomeric roofing paint. We know this stuff works really well on our RV roof. It's kind of a rubbery thick paint that dries to form a good moisture barrier on roofing, wood, metal and concrete.  We know at the Big Box Store, it runs $70 for the 5 gal bucket.  But at the ReStore, we found a full new unopened bucket for only $30. Score!

We had used this product before, so we knew what we were dealing with.

First, we totally cleaned the floor and swept it well making sure it was dry before we began. Steve sealed up all of the cracks around the edges where the footing met the cement slab with a special cement urethane caulk. He went through about six tubes, but it was well worth it.

Using a heavy nap roller on a long extension handle we rolled the first coat of elastomeric paint on the floor. 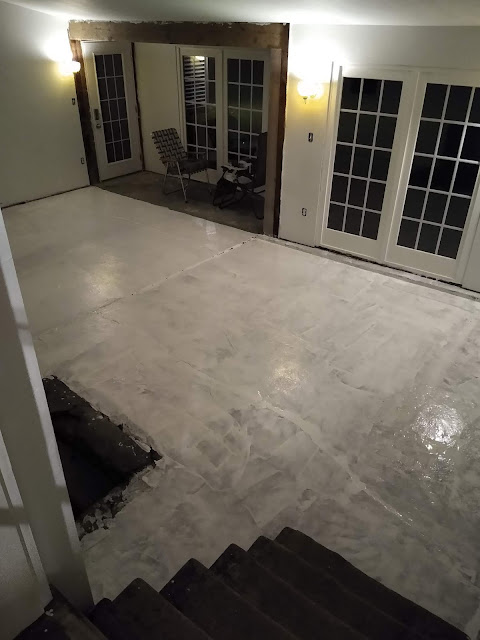 We set out two big fans
to circulate the air
and assist in its drying time overnight. 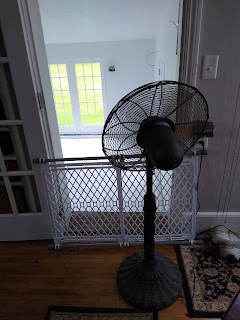 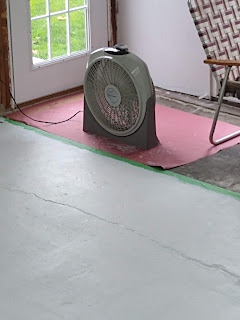 The next day, the first coat was thoroughly dry, so we could add a second layer. Wow, it was amazing to see how big the room appeared once the floor was all white and bright. 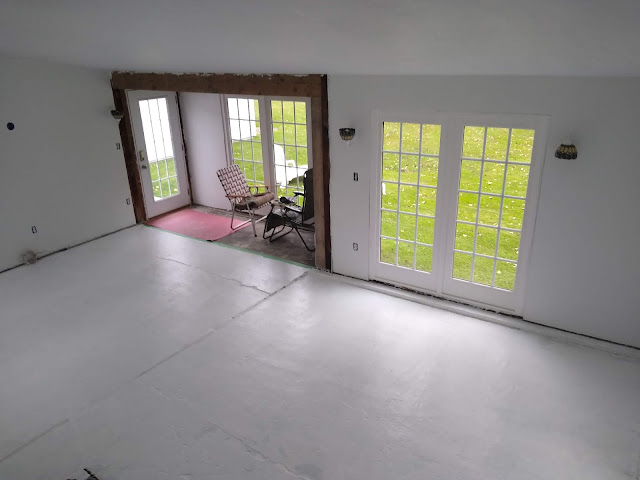 (the 4x12 space by the door will be ceramic tile later)

With the sunshine streaming it, the floor was dried up in a short time compared to the overnight first coat when it was humid and damp out.  Now we went around the entire edge of the footing at the walls and added a strip of rubberized wide sealant tape, normally used to seal around windows and doors when installing on new construction.  It was a way to cover the top of the footings before our wood floor joists met the edges. 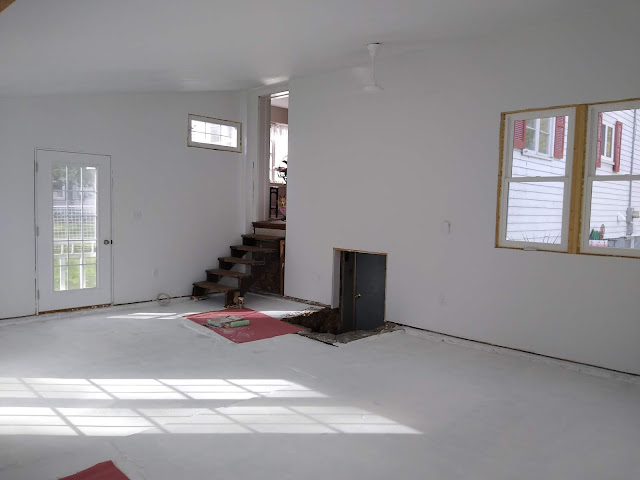 THIS IS GETTING SOOOO EXCITING!
(to me, anyhow)


The next step was to start building a framework of cross support joists over and around the original stairs that lead down to the basement. There is another full size entrance to our basement on the other side of our house.  So we really don't need these.  Besides, they are old rubble stone, crumbling and dangerous! By closing them off, we can run flooring directly over the top of it. Steve had recently acquired a very nice hammer drill that took care of drilling the holes and then screwing in the special cement tapcon screws into the cement foundation.

I have a pic of the first three boards around the edges of the stairs, but didn't get a shot of the four cross board joists he put over the open space.  Once that was done, he then covered the entire thing with a thick piece of sub floor to bring it up level to the rest of the floor. 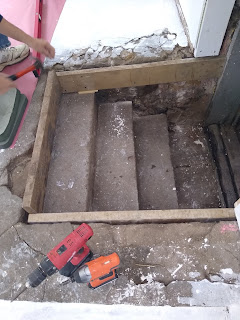 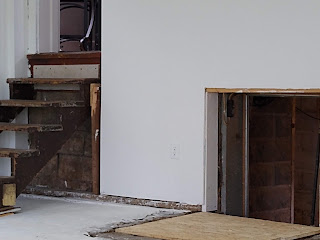 Speaking of level, here is another new toy for Steve's assortment of tools. A lazer level! We had never owned one before.  We chose one that showed in bright green. Steve is colorblind and the red lights and sometimes the blue lights give him grief.  Green is a good color for his eyes. 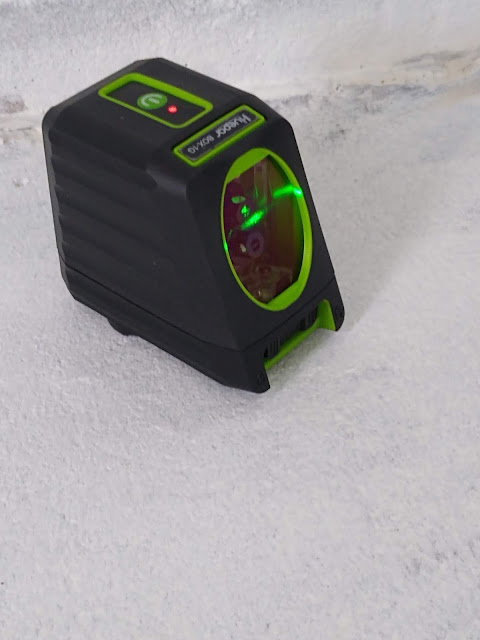 This really came in handy
to find the highest spot
and the lowest spot
of the uneven flooring.

Finnegan thought he needed to get in on the ACT 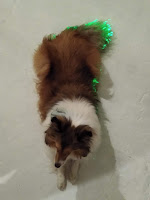 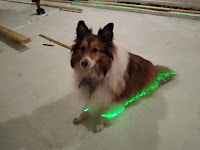 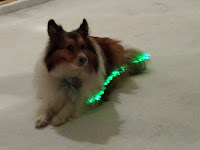 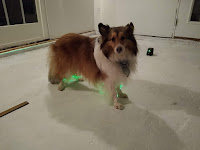 Once we had established where our high spot was, we could start laying out 2x4's to create the grid of floor joists. Each joist needed to be cut lengthwise to fit along the line of the uneven cement, but the top edge of the board had to be level and even for the flooring.

In the old days, they would have scribed it  (or pour all new cement that was level!)   But with the lazer level, each board had to be carefully marked with a magic marker all along the laser line. That was my job. Crawling on my hands and knees I carefully marked each board with little lines, every foot or so, as to where we needed to cut it. 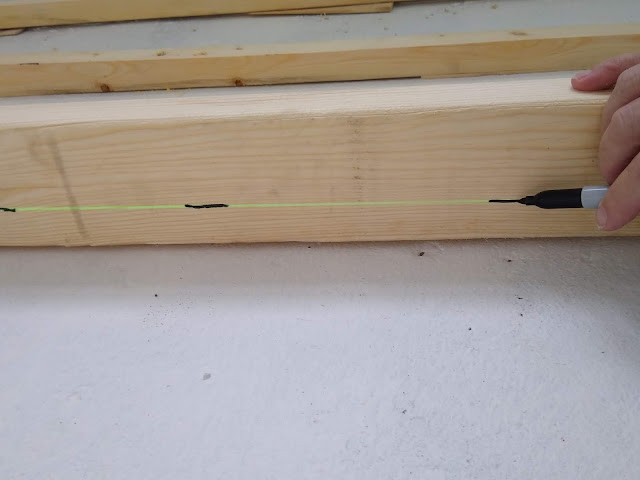 Once my little marks were connected together with a yardstick so we could draw the line the entire length of the board with a magic marker. We brought each board, one at a time, out to the garage to the table saw. These boards were all 12 feet long, so it was a long process.  While Steve carefully fed each board through the saw, intently cutting on the line, I was at the other end catching the two pieces and trying to help hold it even and not pinching as it fed through the saw.  That way there were no slipped boards or awkward cuts by having two people do this process. 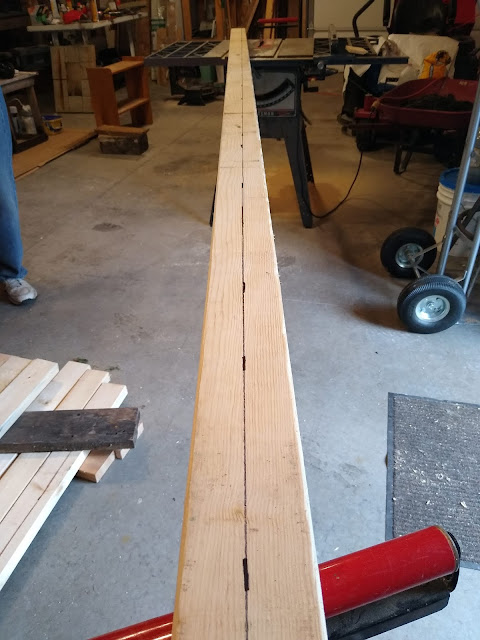 It was a really tedious job, and we needed to do 16 boards for the north section and 16 more boards for the south section. One at a time.  Here is the first board going in after we cut it!  Notice the "Supervisor" on the job.  Binney didn't care for the noise of the hammer drill, so she hid out up in the bedroom. 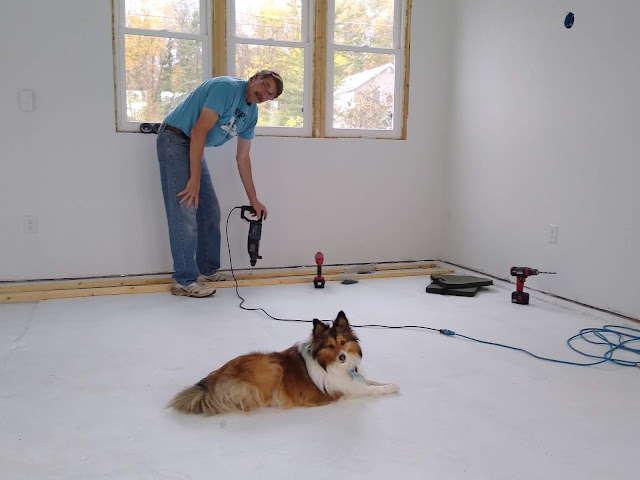 When each floor joist was brought back into the space and carefully screwed down into the cement --- using the hammer drill and tap con screws. We had to measure everything as exactly and carefully as we could. By spacing the support joists at 12 inch on center, it would make an even sturdier floor than the traditional 16 inch on center of most flooring installations.  Less movement, less squeaks. 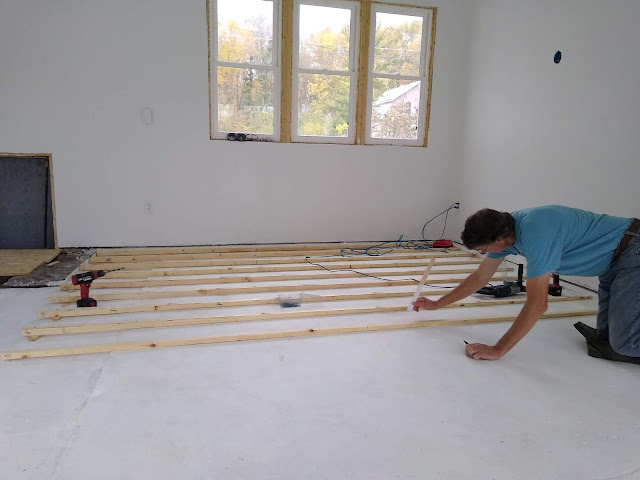 We did a lot of "knee work" and used foam gardening pads instead of the strap on knee pads. It seemed to work better for us.  We also used a lot of ibuprofen at night.

This is an interesting nighttime shot showing the laser light just tipping the edge of each one of the boards and even the little tufts of wood shavings from around where each tapcon screw head as it went into the wood.   Half way done! Enough for one day. Time for bed. 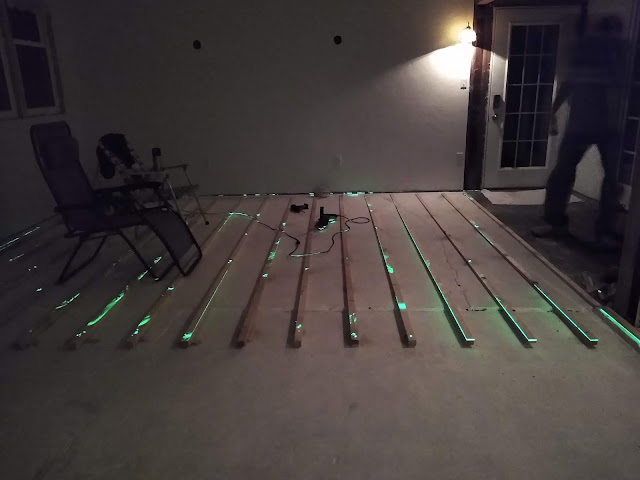 The northern side of the garage cement was higher then the southern side. We had to be pretty creative with shims and studs to get everything to join up and meet and remain level. I numbered each joist board in consecutive order as well as each end of the board North and South so no boards got flipped or flopped or rotated in the wrong direction during installation. 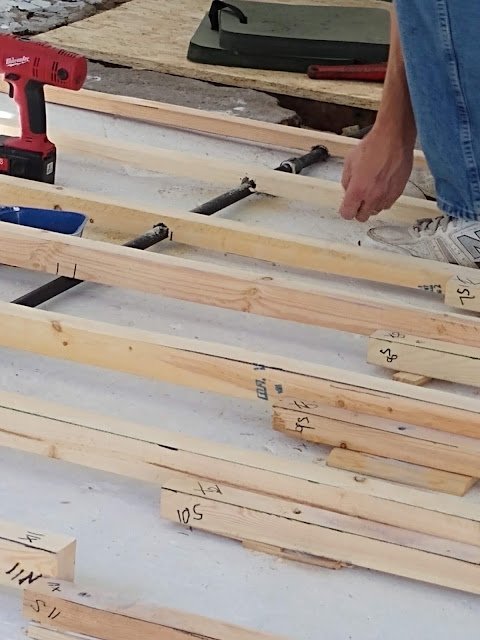 We had to carefully allow access for the natural gas pipe to cross the room and come up in the area that we had decided to add a natural gas fireplace stove unit. We also had to accommodate electrical wiring for two different in-floor outlets. I wanted one underneath the couch and the other underneath my center sewing island. Much better than having extension cords stretched across to the walls ... and safer too. 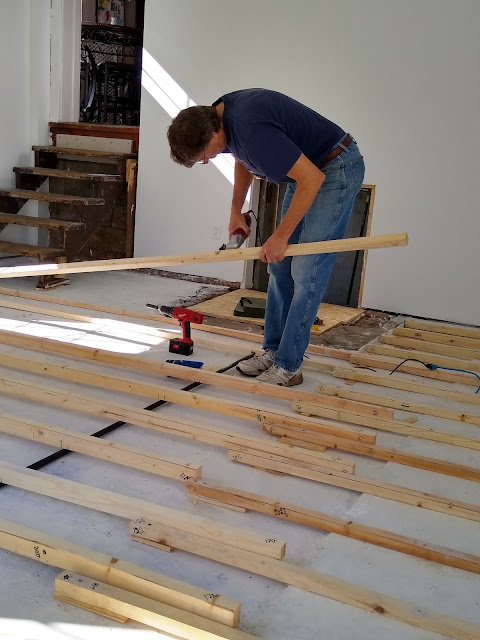 We worked our way across the floor putting each board into place and soon we were able to move on to the next step by the next afternoon. 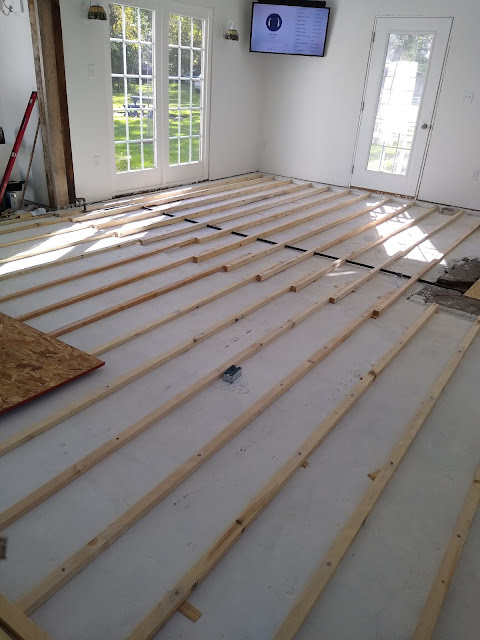 Now we cut layers of rigid Styrofoam on the table saw, again it was a two person process to help hold it steady as it ripped through the insulation.  A long time ago, I found Steve that old Craftsman table saw at a rummage sale, for a bargain price of $50 and I snapped it up.  I only had my car, but the guy at the rummage sale DELIVERED it for me!  Surprise Surprise when Steve got home. I added to his "tool collection"! 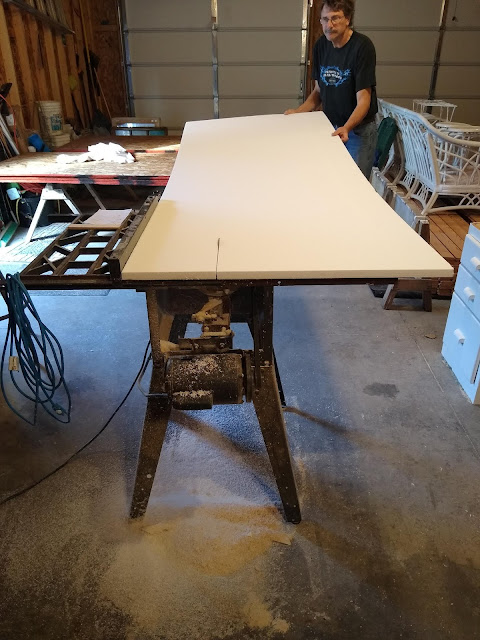 Each piece was then laid into the spaces
between the joists
to add extra insulation to the floor.

(we creatively used the scraps too,
and utilized my quilting cutting skills to make them all fit) 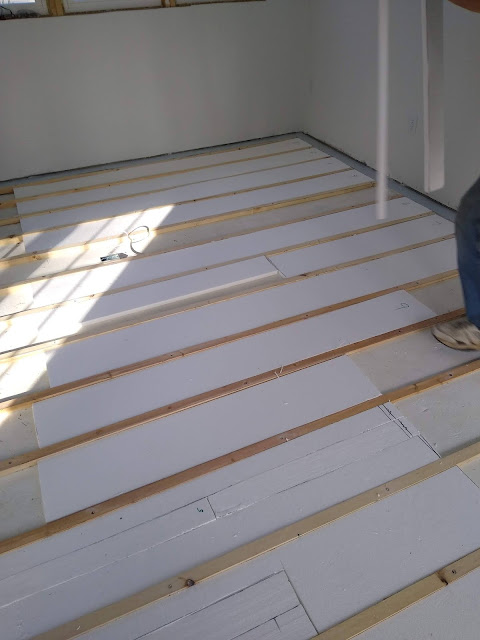 Well, I think this is enough for one blog post.

NEXT we had to come to a fork in the road. We had to make a BIG decision on what way to go with the next step, and if you stay tuned to my next blog, you will read why.  Hmmmmmmm?

Posted by KarenInTheWoods at 5:31 PM

Labels: enclosing garage stall to make she shed, flooring, lazer level, leveling garage floor, making a She Shed, making a she shed out of an attached garage, next steps for she shed