I made some arrangements Saturday evening that little Whitney and Jameson could come over and help me with projects on Sunday. I had a few things in mind and I thought it would be nice to have them join in.  Putting them to work, and getting them out of their parent's hair for a few hours.

Since those two grandkids live only a mile away, they rode over on their bikes. Very strange that it is the end of November, we have no snow, and they are still able to ride their bikes?  But some snow is due in a big storm on Tuesday into Wednesday.

With the four oldest grandkids here, littlest Claire stayed home to spend the day with her mommy and daddy.  We had big kid projects to work on today.

One of our projects was to work on a special Thanksgiving treat to be able to take to the big family dinners on Thursday.

The kids have helped a couple other years in making these turkeys. They are time consuming and putzy. That's why I needed all the help. 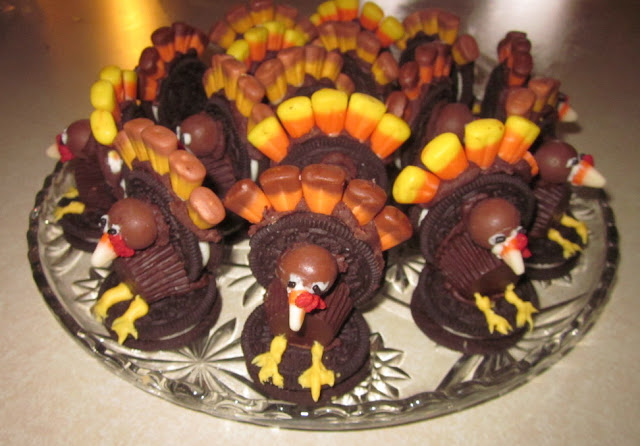 These are created with Double Stuff Oreo cookies, Reese's peanut butter cups miniature size, malted milk balls, and pieces of candy corn. Not to mention lots and lots of frosting that needs to be really sticky and also dry hard. 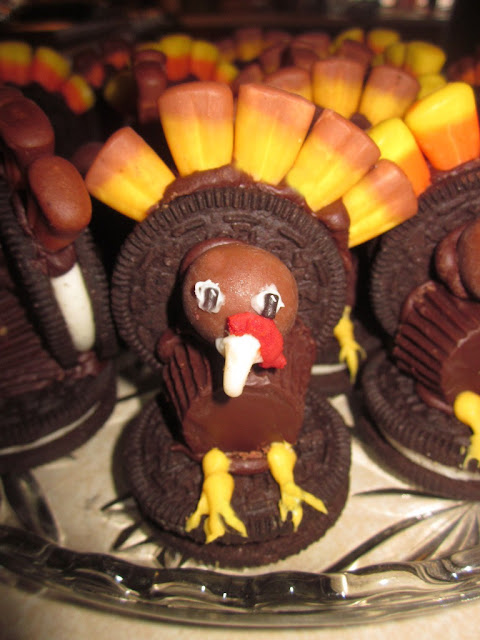 Firsts, stick candy corns with a row a of frosting to the edge of a double stuff Oreo cookie
then stick another cookie at a right angle with more frosting and lay the turkey on it's back 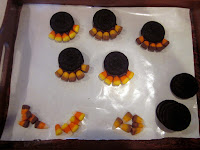 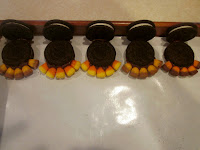 slice the side off a mini peanut butter cup as a body
attach with frosting to the base and the back,
then add a malted milk ball as a head 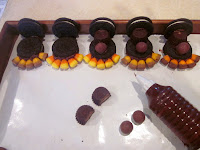 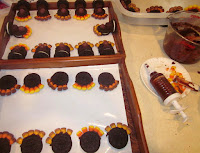 let firm up in the fridge to be able to set the turkeys upright
then add streaks of yellow for the legs, little eyes with mini chips,
and a red waddle off a tip of candy corn for a beak 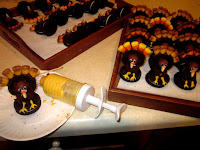 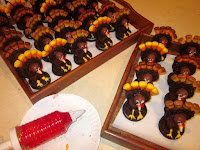 The kids went right to work and everybody had a part of the project. Everybody had patience and we finished up all of the cookies step-by-step. Sitting at my table in the sunshiny kitchen is a dream come true, and one of the best reasons why we moved north to Oconto. 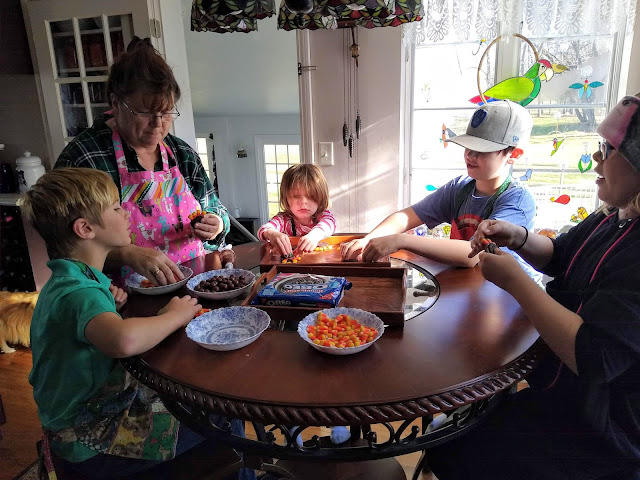 Each time we'd have to slide a tray into the refrigerator to chill the frosting. 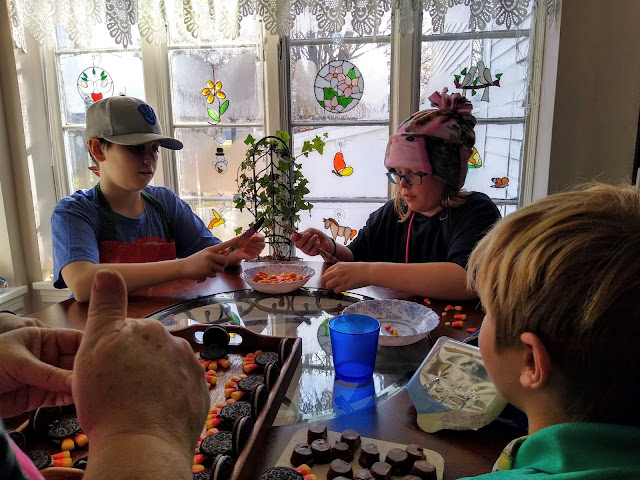 We made up some for Jameson and Whitney to bring to their other Grandma and Grandpa's on Thanksgiving, and the rest will come with us and Chelsea and Clayton to the Pfundtner gathering down in Menasha. 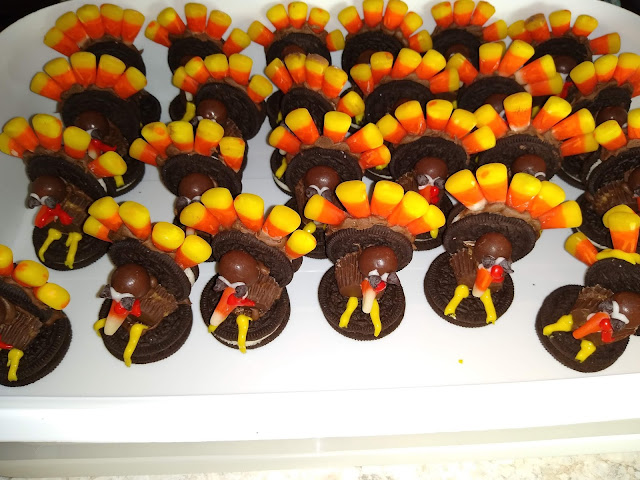 
I told them the story about Popcorn Ball Promise when I was a little kid.

When I was a small child in the early 1960's, we would get all dressed up in our holiday clothes to go have our picture taken with Santa. We will go up the road a mile to Palmer Butsky's Tap in Kirchhayn, Wisconsin. In the back room there would be Santa set up in a chair, and we will get our photos taken. Of course I was only 2 years old, and my brother Butch was 4. We would tell Santa what we wanted for Christmas. Then Santa would give us each a popcorn ball wrapped in pretty red or green cellophane. We were told that if we wanted to eat the popcorn ball, it was our promise to be very, very good until Christmas! 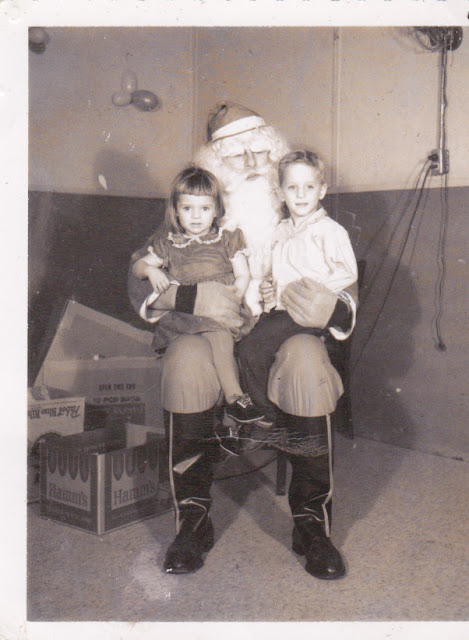 (the popcorn balls were in those Hamms and Pabst boxes next to his chair,
you could tell we were in a tavern!)

We saw popcorn balls at the store this week, and I stocked up. So all of the kids agreed to The Popcorn Ball Promise and eat their popcorn ball. I know that's a long haul from Thanksgiving to Christmas to be very, very good. But I know what these grandkids of mine, they sure will be! Or at least they will try.... 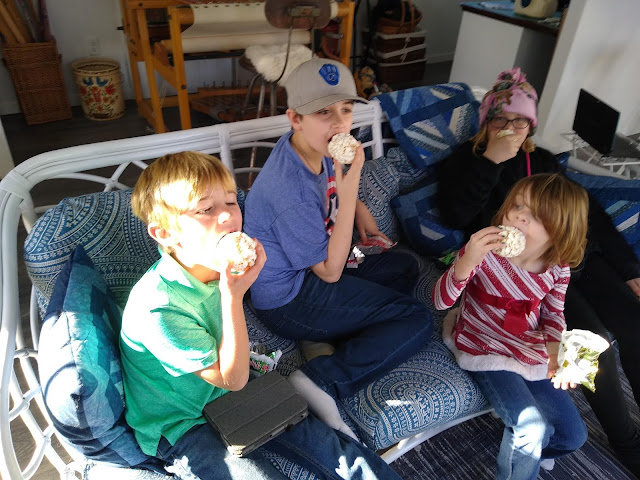 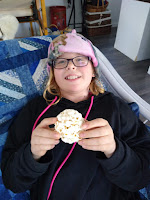 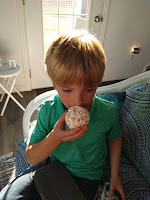 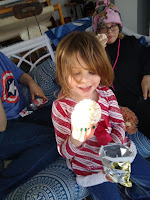 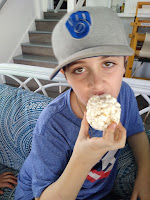 We had a little time outside to ram around. The boys were out stomping in the frozen mud puddles. Somehow, Clayton's new boots accidentally got wet, because the mud puddle wasn't frozen all the way through. Oops!

The girls and I took the dogs to walk all the way out to the back property line in the big backyard and let them run around and act goofy. We were all running around and acting goofy, including Grandma. Those girls giggled and pretty soon burst into howls of laughter to see Grandma run!

Our other project was something that I have trusted the kids with helping a couple times now over the last few years. It was setting up my Christmas village. I have painted each and every one of these buildings myself, as well as I have started painting houses and buildings for every one of the grandchildren each year. This year will be their third year to get houses for their own personal villages.... 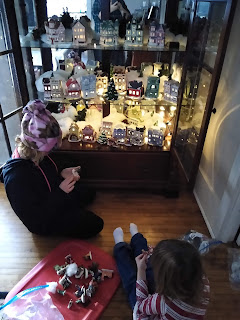 I let them set it up inside of my china hutch on all three shelves.  The kids all helped to arrange all of the lights, the snow, the trees, etc then it was time to place which buildings where. We went through each building and talked about what they were and what people did in those buildings. 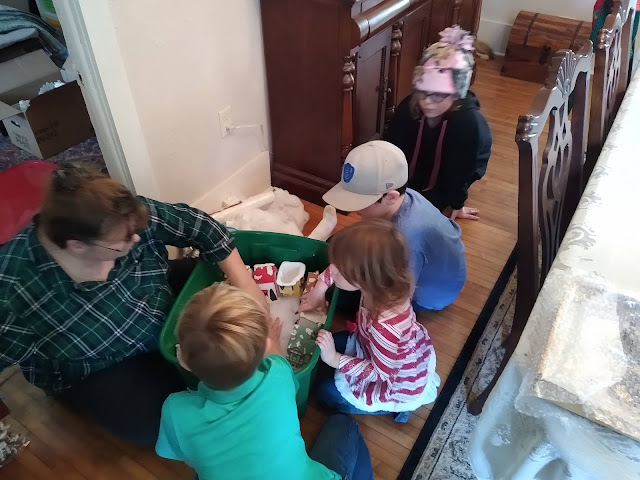 They took turns and didn't fight or argue too much.  It was interesting to see what each one thought was the prettiest, the biggest, the most fun, and the reasons why one building needed to go next to the other ones. 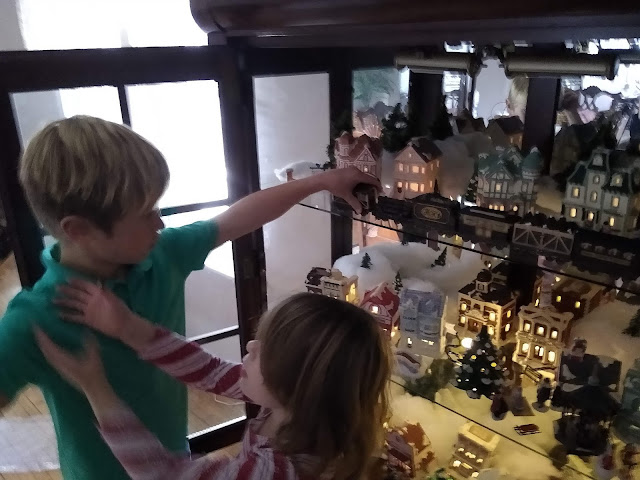 They loved creating the "village" and
made up stories about who lived in the houses
or worked in the buildings. 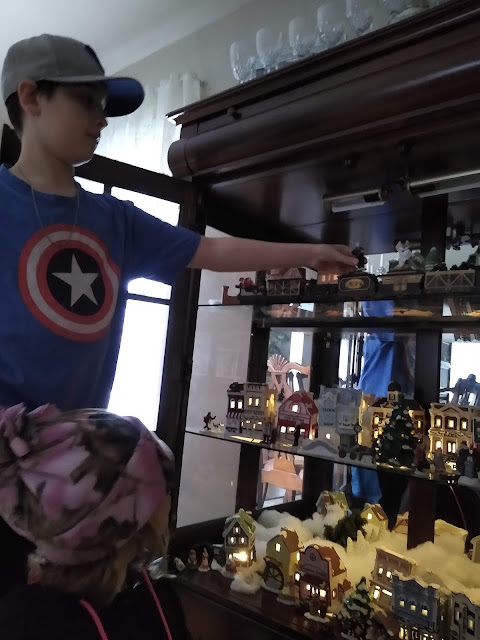 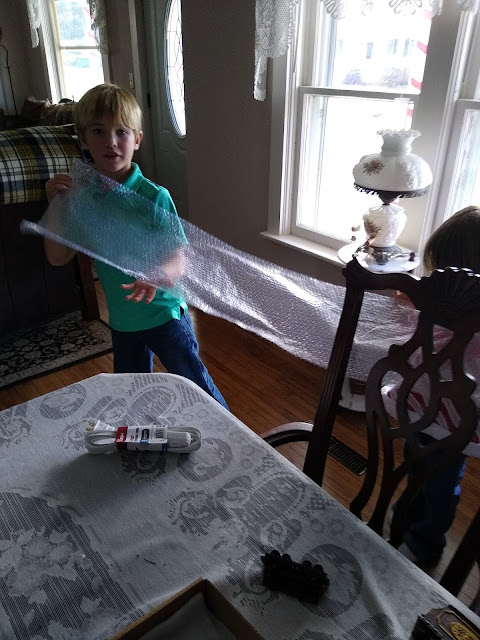 Then they went through all of the little characters and figurines. They figured out what should go where and which made the most appropriate sense. They arranged and rearranged it a number of times. 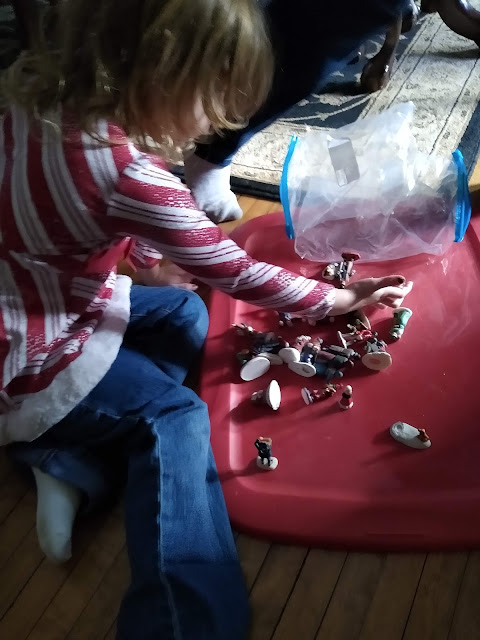 They even took home some extra figurines for their own villages. 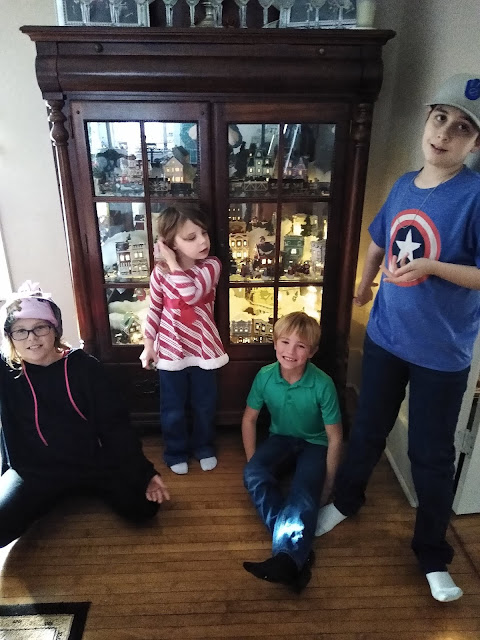 Later, I was going to go through it and try and straighten it up afterwards to the way I liked it. But then I changed my mind and said "no" to myself. I will leave it exactly the way they put it together! Sometimes we adults have to let go and let the children have the satisfaction of a job well done in their own eyes. 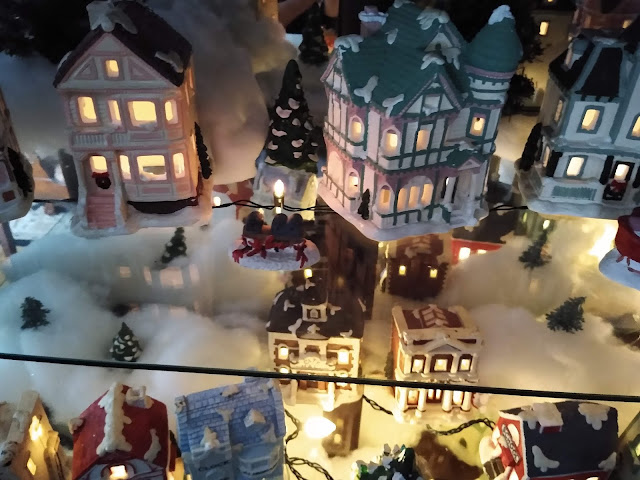 By late afternoon, Grandpa was getting pretty tired. Although the antibiotics are kicking in, he's not quite up to 100%.

I piled all four kids into the car and we headed out to Heather and Jesse's house. They had been working hard on putting together their new artificial tree this year. 9 ft tall and looking absolutely stunning. They were just about ready to start hanging ornaments when we burst in the door. Their kids were back just in time! 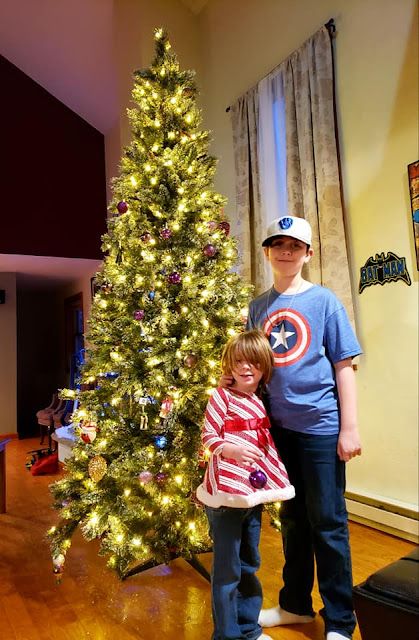 Heather and Jesse have recently bought their kids Jameson and Whitney a set of baby ferrets. They are so totally adorable and soft. They slip and slide all over you and twist and turn and sniff and snuffle. They play and are very friendly also. Heather calls them cats snakes. They're fluffy like cats but they slither and slink all over like snakes. These two are young so they are extremely energetic and playful and engaging. They love attention and they romp and play and don't try to hide or get away. Perfect pets. Their names are Ivy and Harley after some movie characters I guess. They are both girls though. 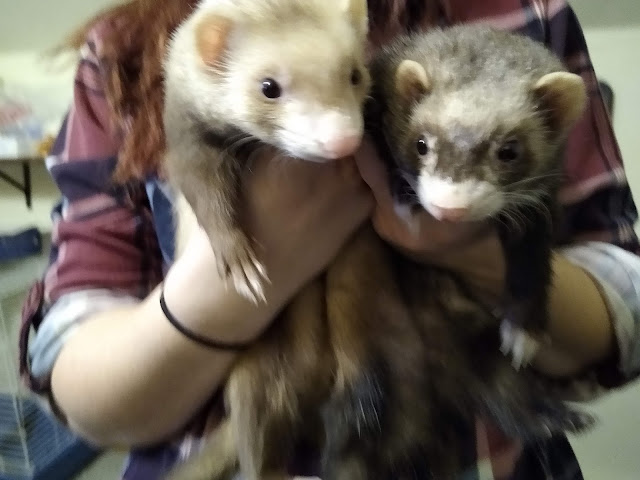 Next it was time to drop off Clayton and Chelsea at their house. Little Claire had gotten in a nice long afternoon nap, along with her parents. So although she didn't get time at Grandma and Grandpa's, she did get special one-on-one time with her mommy and daddy.  As a "thank you" for getting the two older ones out of their hair for the day, Waylen had made a scrumptious pumpkin cheesecake pie and sent home two pieces for us.  Yummmmmmm 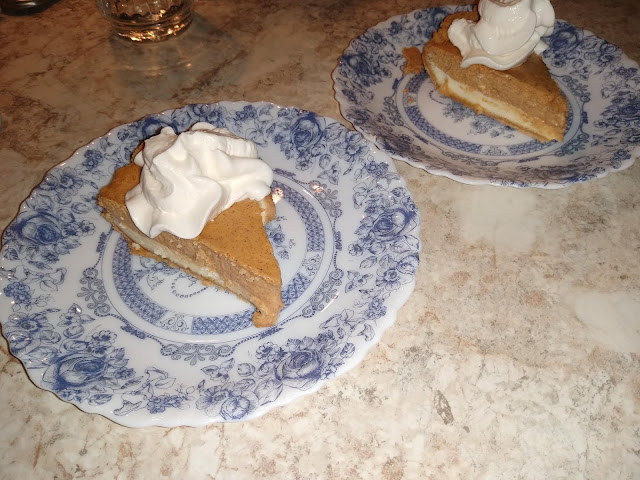 All of the kids are off school this week for Thanksgiving vacation so maybe we will go back and have them once or twice from daycare and have them come over again.

After dropping off all of the kids, I came home and felt a little bit of fever and chills. We had our flu shots on Friday and I'm thinking our bodies are getting used to the vaccine and fighting it off a bit. I curled up in my jammies and a comfy quilt and started to watch the Packer game. They were losing, so I was falling asleep. I didn't see the final score until this morning. Very sad, but we are still number one in the division.

Today Steve and his brother went to go spend the day with his dad up in Sister Bay. They are moving his motor home from the summer campground over to storage and getting it closed up for winter. It's also Pop's birthday, so it's a good day for his sons to spend with him. We will all see him on Thursday for Thanksgiving.

Posted by KarenInTheWoods at 10:30 AM