As promised, I'm continuing the step by step process of what we were doing to complete the she shed. Yesterday's blog detailed all of the electrical and insulation.

I mentioned at the end of the blog that we had contacted our neighbor to get a referral. Our neighbor hangs drywall and we asked him who to get to do our finishing, which is all of the taping and the mudding work.

After our putting up all of the insulation and then hanging all of that drywall, we decided we are getting too old to do all of that overhead work. Especially up at 11 feet high sloping down to 8 feet high in the she shed.  Steve said after mudding and drywalling the half bath last month, he was DONE doing it himself. Time to hire someone else instead.

Our neighbor recommended a young man by the name of Paul. He is an experienced drywall finisher who has done various jobs in the area and works for a local contractor. Our neighbor said he did an excellent job for him personally at his own home and he is willing to take on side jobs at his own convenience.  He also mentioned that he had done a plastering job in a restoration of a historic lighthouse.  Interesting!

Paul came over at a designated time to give us a quote. When he saw the wonderful job that Steve and I had done with the drywall installation, he said that he would like to offer us an alternative rather than just taping and mudding. The drywall was done and joined so well that he had another idea.  He suggested that we go ahead and actually plaster the walls. He said he enjoys plastering much more than traditional drywall work.

He quoted us a very reasonable price to do the work, based on the condition that he could come over and work on it in the evenings or on the weekend after his regular job hours. He made it clear that it may take a little longer to complete it, but that would give it a chance for the plaster to dry in between coats.

We agreed to our picking up all of the materials and he would bring over all of his tools. We agreed to lock it up each night so nothing could be misplaced or disappear, but each morning we would unlock the room so he could come and go at will.

He furnished us with the specific brand of Venetian plaster that he likes to work with, as well as a special wall prep material that works as a bonding agent between the plaster and the drywall. He liked a certain type of mesh tape, and we got everything on his wish list.

We picked up all of the materials that evening and had them ready to go, and he was able to come over and start the next evening. 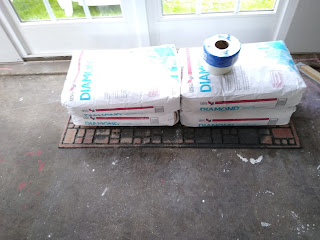 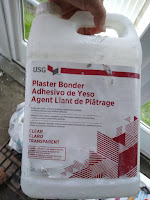 Paul brought in all of his scaffolding and stilts and tools to get right to work.  He had to roll all of the walls and ceiling surfaces with the bonding agent to insure a good surface for the plaster to hang on to. 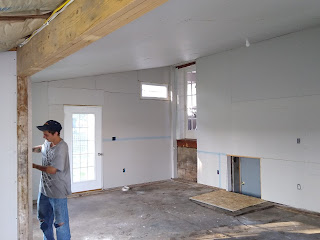 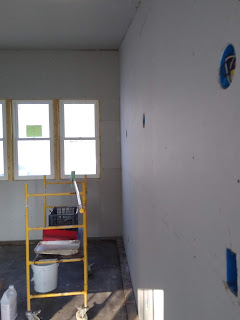 The next step is to cover all of the seams with a special blue mesh tape. Then he covers those seams first with the plaster, making sure it gets pressed deep into the mesh. He also gives a good coat around each wall outlet and light fixture box. 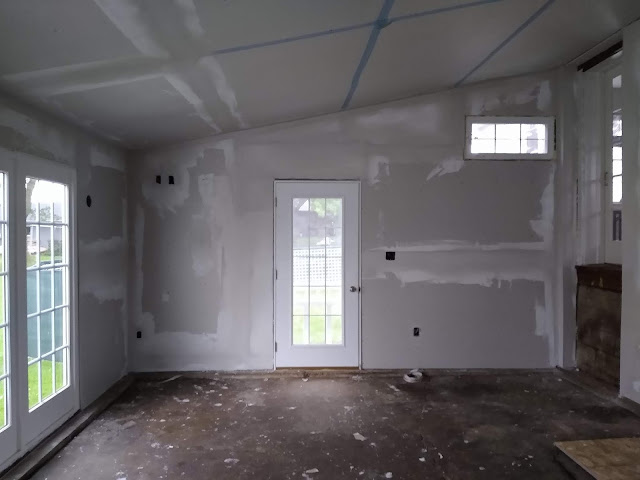 He was especially happy that he did not have to put drop cloths all over to cover and protect the floor, like at most jobs. Because the floor in the she shed was still the original garage cement floor, he didn't need to do anything special to protect it. We said it was fine if he dropped plaster on it and we would take care of cleaning it up later. It made his work much easier because he would not be stumbling back and forth over tarps while wearing his stilts or arranging his scaffolding and having to rearrange tarps all of the time. It made his job much easier.

We provided him with a little mixing station outdoors with hot and cold running water by our exterior faucets, as well as an area to plug in his long drill with a mixing bar and additional buckets if he needed them.

I furnished him with buckets of ice water and bottles of drinking water and clean terry cloth rags and towels, because the weather was starting to turn very hot and muggy!!!

Boy oh boy, did that guy work hard! It was hot and muggy and sweaty while he got the first coat on. He said actually the muggy weather is nice, because it will prevent the plaster from drying out too quickly. He worked a lot with the windows closed down to help control the drying process. 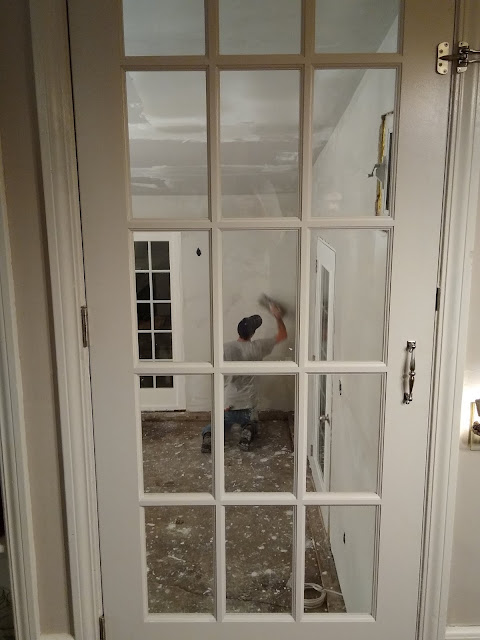 I could have NEVER HANDLED ALL OF THAT HEAT AND HUMIDITY!!!  It was well worth the money we were paying him to do the job for us.

Over the next four days he came and went from the she shed. He lived nearby so he was able to go home to grab lunch or supper or take care of other errands. In between working and being here, he was also running his grandfather to a doctor appointment, running his dog to the vet, and working full-time.  He managed to squeeze in all of our work in 4 days. He was always messaging us to let us know when he was coming or when he was leaving. Some nights he was out there as late as 10 or 11 p.m.  It had to dry in layers in between each visit so that was good to space it out he said.

Here are some pics during the process:

EAST WALL WITH THE FRENCH WINDOWS 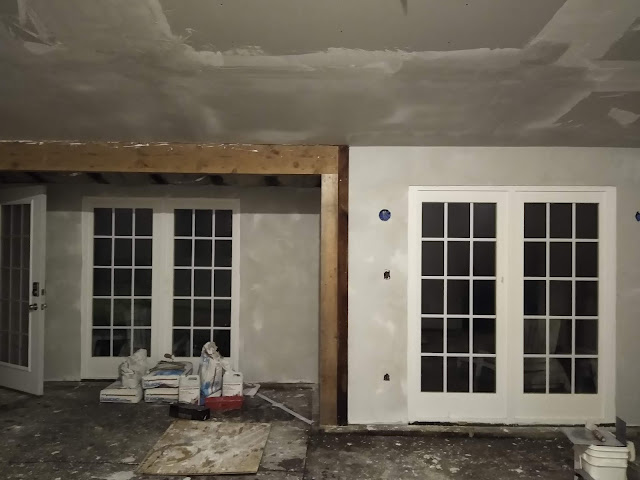 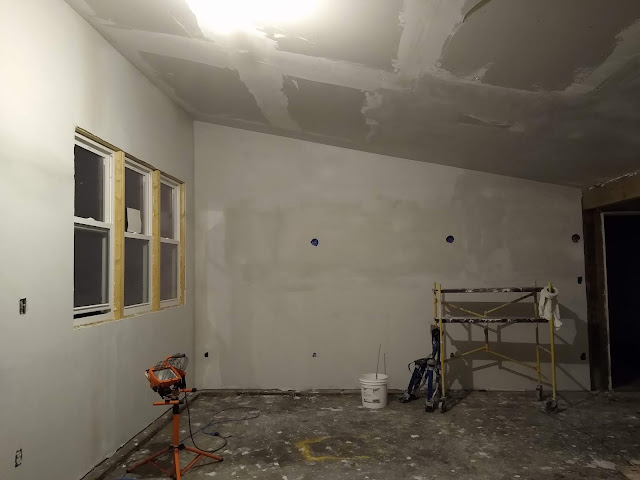 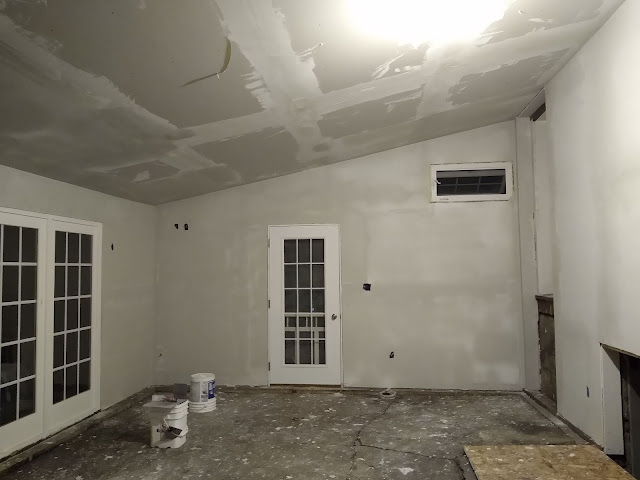 Each time after he left, Steve and I would go down on to the floor and do some mid job clean up. Steve would scrape any big gobs of plaster up with a snow shovel, and then sweep it into piles. I would vac up a lot of the excess with the Shop-Vac. It just kind of kept the job site a little cleaner and easier to work in and kept it from accumulating too much by the 4th day if left untreated. 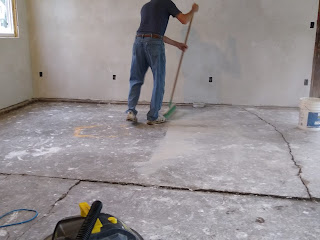 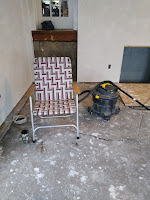 The only inconvenience the job posed to us personally was that we had to remove the temporary back stairs so he could access the entire ceiling and corner walls with the scaffolding and stilts. Without having the stairs from the kitchen down into the she shed, that meant that the dogs could not access their potty yard as easily as their routine allowed. 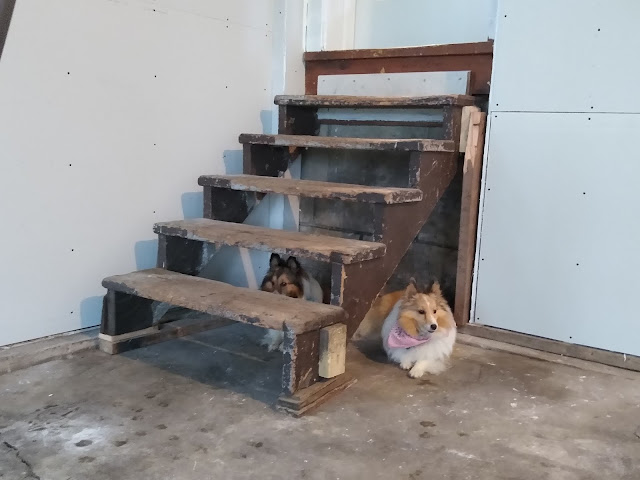 Instead, we had to bring them out the front door, around the house, and put them into the fenced-in area from outside. Four or five times a day we would do that routine, even in the early morning and the late-night one before bed. But it was a minor inconvenience considering the fact that we were getting all of this work done for a good price. 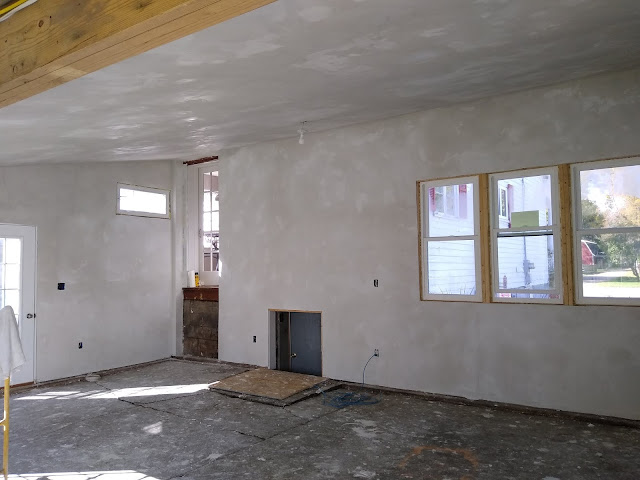 We also covered the stairs to the basement door with a hunk of sturdy plywood. Later we would level and block those stairs off permanently, and just make a scuttle hole access in the wall.

It was kind of fun to watch him from time to time, but we did not want to interrupt or waste his time. The neighbor who recommended him also came over to check out his work and compliment him on a fine job he was doing for us.

Watching the way he handled his tools and slide that plaster back and forth with such precision was interesting. He kept up a figure 8 motion with that big trowel that just moved everything around to where it left an attractive finish as it dried.  No big gobs, no funny "chatter"  as he called it, and no big differences in thickness. The venetian plaster dries with some smooth and shiny and some more matte type finish in the skip trowel areas. 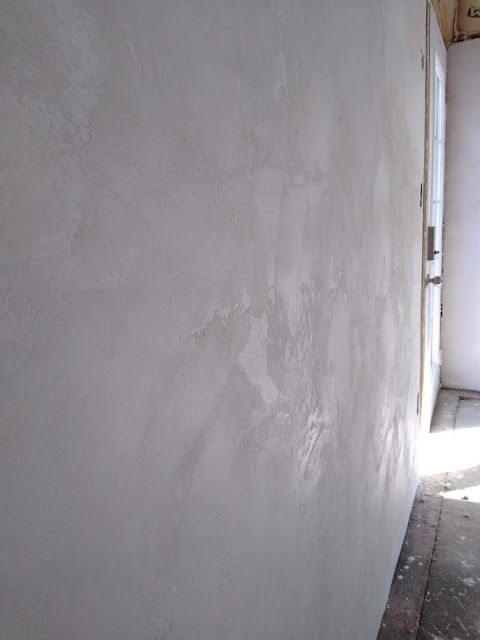 By the fourth day he was finished and we gladly paid him in cash. Steve also had some old plastering and drywall tools that we would no longer need, so he passed them on to Paul to add to his own collection of tools. We had some leftover materials that we also told him to take along and could possibly use on his next site.

I posted positive job reviews on all of the local marketplace groups, to help gain him some more side jobs.  We were totally satisfied with the finished project and we felt he did a good job.  Plus it was saving us a lot of back breaking work in hot and humid miserable working conditions too!

Now we had to do the agonizing process of waiting three days for the plaster to fully cure before we could prime it and paint it!!! 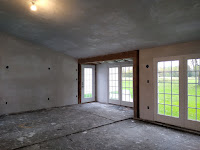 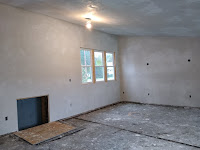 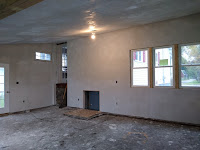 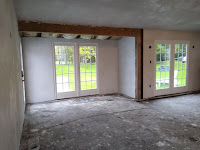 Sooooo during those three days of forced waiting, we took care of another project that has been on the back burner for quite some time. I will talk about that in my next blog!!!

Posted by KarenInTheWoods at 9:52 AM