Well, the only way I managed to get Steve to the doctor was because we already had our yearly physicals lined up for yesterday.

What is it with men and not wanting to go to the doctor?

I dragged his butt in, and we both got our yearly checkups, our flu shots, I got two questionable moles/skin tags removed and we both had lab work done as well.

I beat Steve in the Lowest Blood Pressure contest (we compete) lol.

The doc said Steve has a lingering sinus infection and he got antibiotics to help fight it off. Plus he is going to start some daily vitamins now. Otherwise he is "Fine As Frog's Hair" as he is fond of saying.

I am kinda sorta feeling punky too and thinking I am catching something from Steve.  Going downhill quick. So the doc took care of me at the same time.

We got all of our other prescriptions refilled and they let us go with follow-up phone calls later to say all of our blood work is good.

So I guess we will make it for another year.

Because of the type of health insurance we have, our family doctor, clinics, and hospital are all located down in Fond du Lac, 25 miles past where we used to live. So it's a hundred mile trek one way to go there. It's worth it, because we really like our doctor and we like the care we get in the clinic. We can use a nearby hospital for emergency, but most of our health care is done down there.

We had multiple other errands to run and business to take care of while we were back in the area. Plus picking up prescriptions to get Steve started as soon as possible on the antibiotics.

My friend Vicki works nearby to our clinic, so we stopped and exchanged some packages. A box I brought home was very, very interesting for our dogs because it smelled like her wonderful dogs, Stewart and Tara. 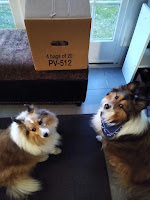 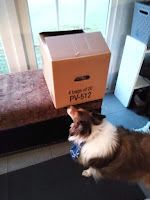 It was like Christmas in November! She had so many cute little thoughtful things tucked away in that box.  Vicky is a very crafty person, and makes so many cute things.  She has been stashing things in a box for us for a while now, because we keep missing each other for walks at High Cliff State Park. 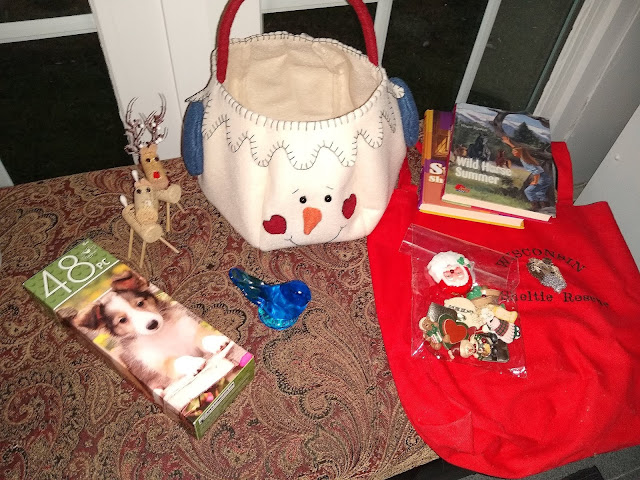 It had been such a long day, all we did was get home and lay around and then go to bed. I didn't even get a blog post done yesterday. Steve was still under the weather and I was pooped out with all the errands and traveling.

Today (Saturday) was all sunshiny and bright.  We woke up feeling a bit better, and we were very appreciative of our morning fresh ground coffee. Yesterday we had to go without coffee or any breakfast because we were fasting for our blood work. 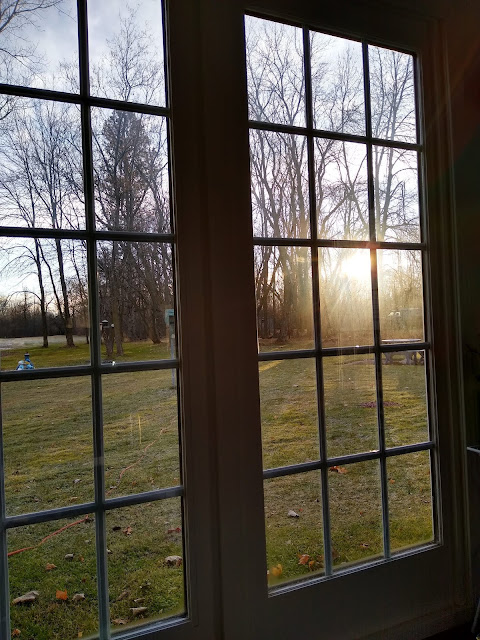 The sun came up and it was going to be a pretty warm day today. I decided I would like to get a little bit more outside decorating done before it gets cold or snowy.

Steve was feeling a little bit better so he decided to join me with his tall-ness and a staple gun. I needed someone on the tippy top to hold the ribbons as I wrapped each of the porch columns. It was kind of difficult to get the ribbon evenly spaced on each one because the columns are not the same diameter at the top as they are at the bottom. 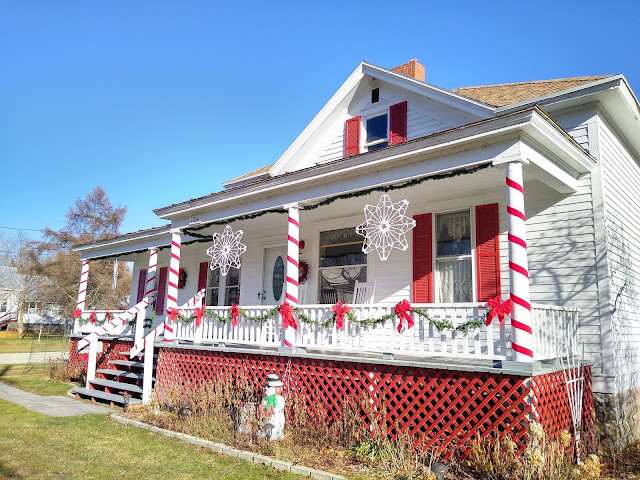 There was just enough ribbon to wrap all five columns, and then the narrower stuff enough to wrap both of the railings on each side of the steps. Honestly, I had one foot of ribbon leftover!!! 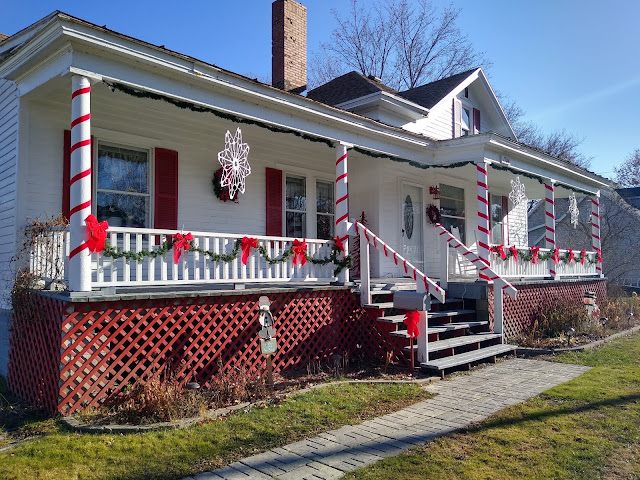 Sooooo do we call it the
Peppermint Stick Palace,
or the
Candy Cane House? 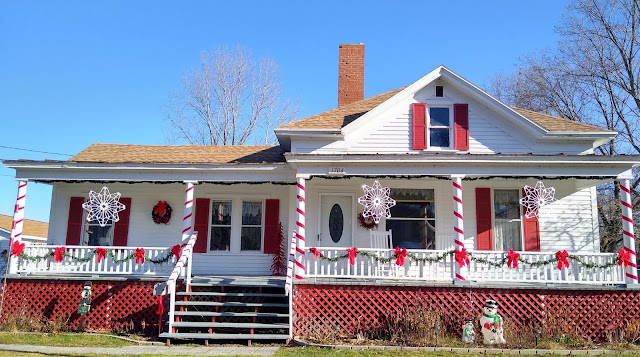 Now all we need is SNOW to make it look picture perfect.  We are due to get some on Tuesday into Wednesday.

Just doing that much work was enough to poop Steve out for the rest of the day. He took a nice long nap in the sunshine on the couch in the She Shed.  He likes napping there better than in our own bed.

We did need to get the dogs out for a run in the Big Backyard.  They have been cooped up and antsy lately.  The poor things really missed us being gone the whole day before. They are used to us around all of the time now. 24/7.  If we go somewhere without them, they are totally lost. 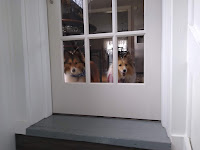 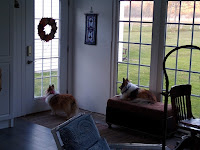 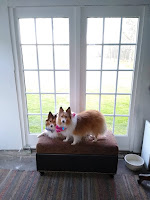 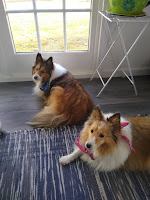 It was good to get them out there today to run run run....
they dash around
and take turns chasing each other
until they collapse in a pile of panting dog fur. 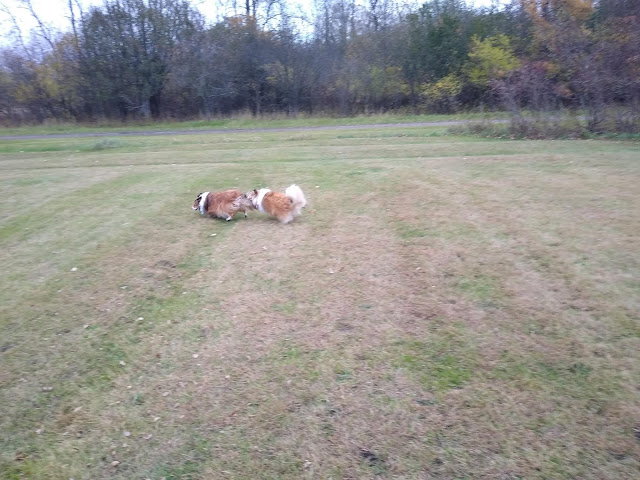 I had a pot roast in the oven all afternoon with carrots n taters. The house smells terrific!

It's a lazy evening spent in front of the TV while state of watching the Wisconsin Badgers win their football game today, and now I think it will be early to bed.

Time to get feeling better!!!

Posted by KarenInTheWoods at 7:26 PM

Labels: decorating he house for xmas, dogs out running, getting doc appt done, ribbons on columns