We are almost to the end of the blog posts on the transformation from the attached garage and mud room into my she shed.

This post has to do with the stairs. The original stairs were quite rugged and worn. They were not spaced correctly for the the riser height or for tread length to correctly fill the span. The top step and the bottom step had huge unexpected drops (and were dangerous).

Steve re-measured, recalculated and made new stringers and built new stairs. The stairs have been in place for a couple weeks but we knew we needed to get railings up to comply with code, as well as to be safe when the little ones were over. 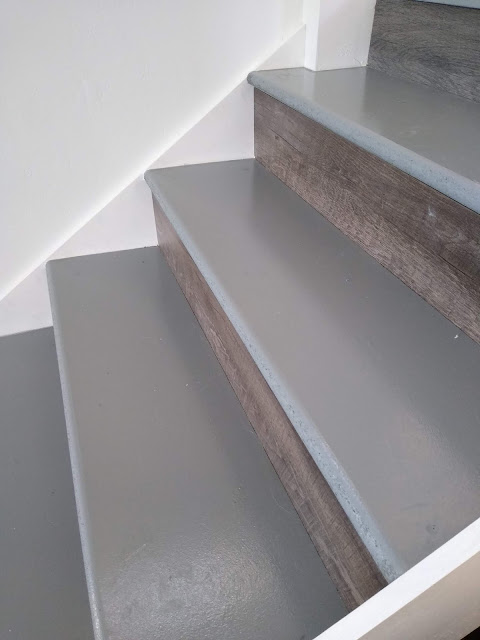 After scribbling a few ideas on paper, we decided we would put not only one railing along the outside of the staircase, but we would also add another railing along the white wall side. Not only is it a bit safer, but it may encourage the grubby handprints of children to stay on the railing instead of being dragged up and down on the white plaster wall! Lol...

We bought some nice heavy duty silver railing mounts and a 12 ft length of unfinished handrail.

I gave the railing a couple good coats of grey oil enamel paint, to match the stair treads. We cut it in half so we would have two 6 foot long pieces. Steve mounted the one on the wall first.  It came out perfect.  Then he worked with mounting the big 4x4 end post, securely attaching it to the stairs. 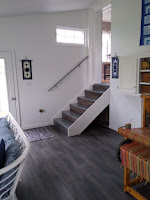 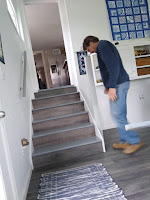 Then he made up side slats that could make a good sturdily constructed railing.  Getting the angles cut to meet with the walls was a bit tricky, but we figured it out together.

He added a middle slat for little kids hands to grab onto. We informed Whitney and Claire that that middle railing was made "just for them" by Grandpa. 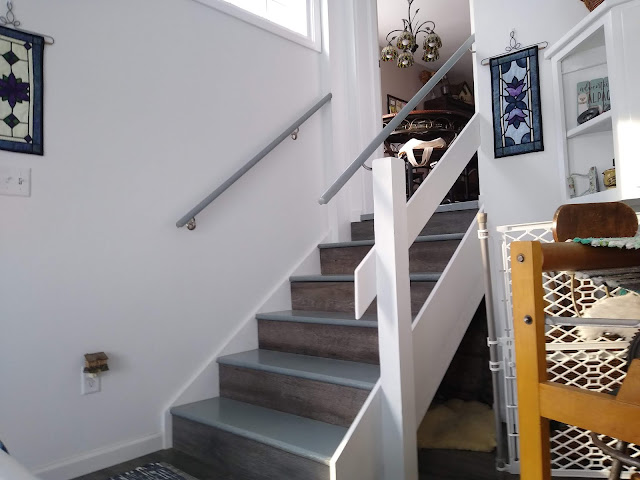 Underneath the stairs is the cutest little Cubby Hole.

I mentioned in yesterday's blog that when I was a child growing up, we had a cubby hole under our stairs. It was a great place to hide and play. My mom also stored her sewing machine in there. Plus we hung up our snowmobile suits and had a big box of mittens and hats near the entrance. It was larger than this cubby hole, I still have fond memories of crawling in there to hide behind all of the things. Like a secret getaway hideout.

While we were working on the stairs, the dogs thought the Cubby Hole was a cool spot to hang out. 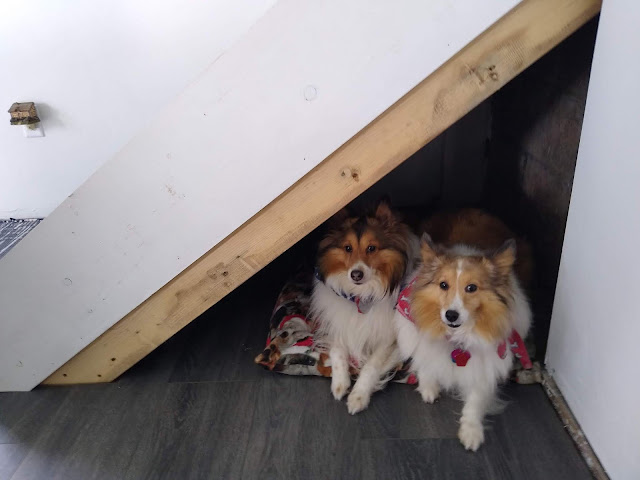 I put an extra doggy bed to put under there and thought it would become their own cute little hangout spot.

But once we moved the comfy porch furniture into the she shed, they gave up the cubby hole and decided that they would prefer to spend their time in comfort on the cushions. 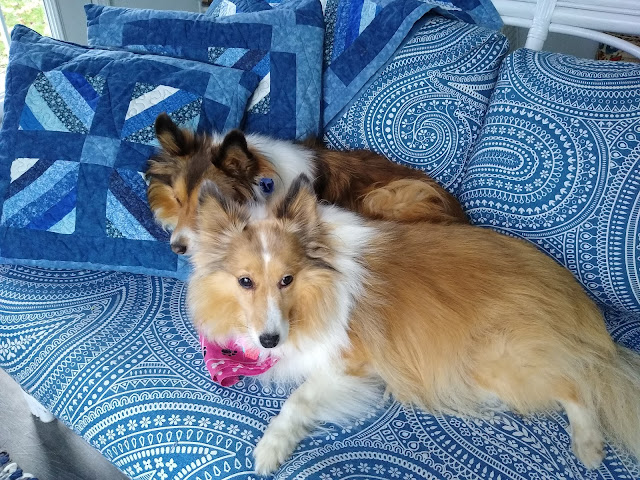 The grandkids,
on the other hand,
think it's just the greatest place ever!

We put down an old southwestern saddle blanket and a couple big hunks of comfy sheepskins. Toss in a few pillows and they are all set. We gave the grandkids a couple of flashlights and let them go in there and read books, giggle and play! 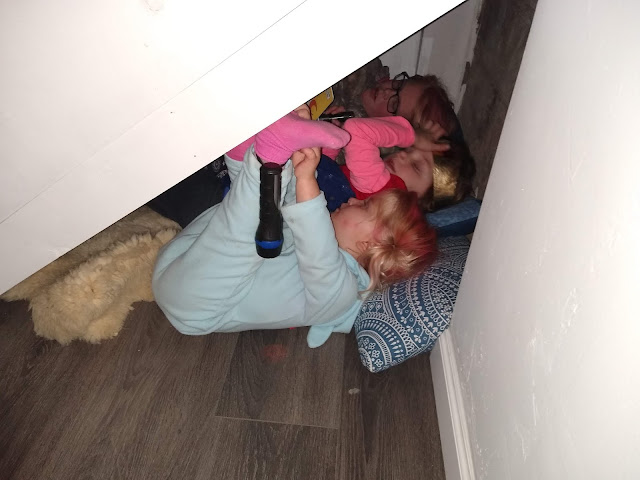 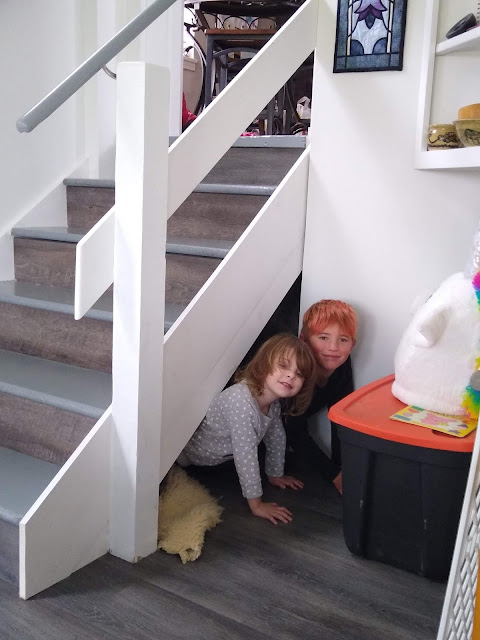 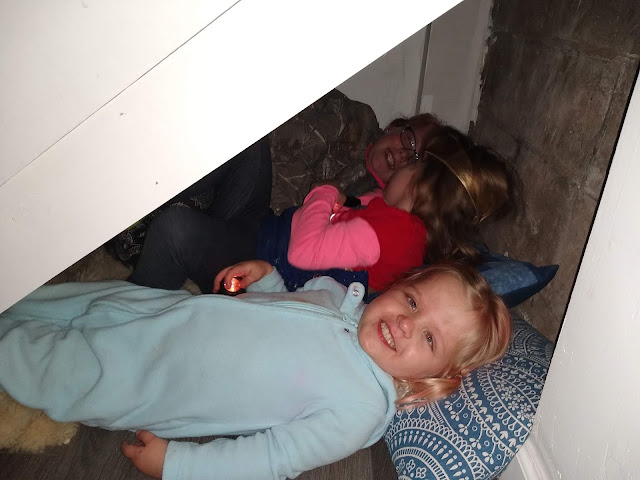 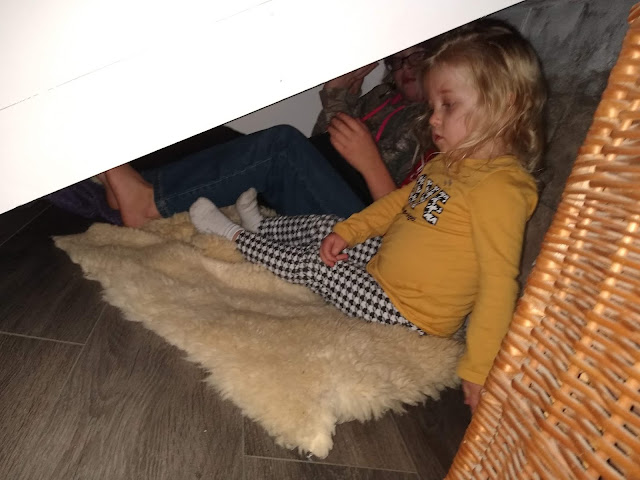 Even some time on Grandma's Tablets 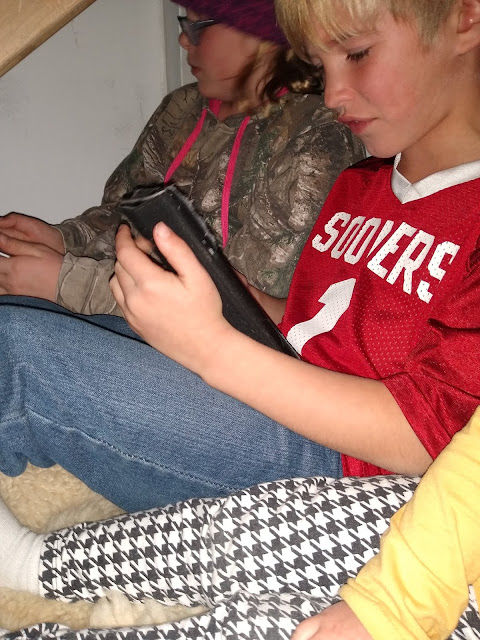 So the stairs are complete, and they are truly my Stairway To Heaven each time I walk down them into my wonderful She Shed! 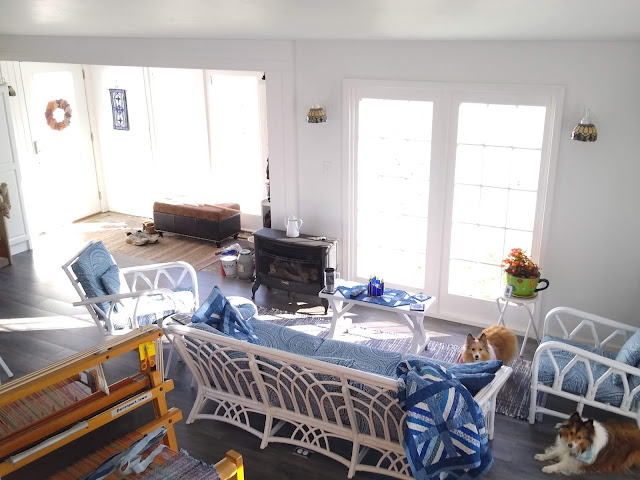 One of the other projects we did this last month that really wasn't in the she shed, but it did involve the ReStore. So I thought I'd write about it here:


Early in the summer I bought a cute little light fixture for the front porch while we were shopping at the ReStore. I gave it a fresh coat of red paint so it matched the shutters. Grandson Jameson helped to mount it up on the front porch. It was so cute and adorable and I just loved it. 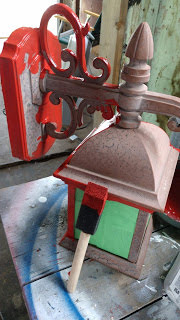 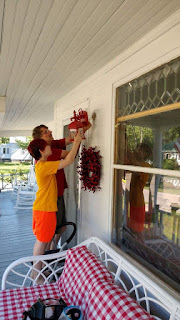 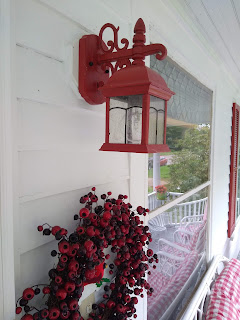 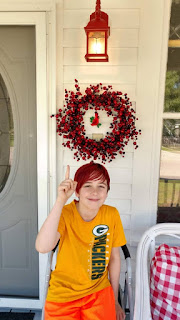 Fast forward 2 months later and we go walking into the ReStore. We've gotten friendly with the lady who is usually there and she said "Look what I have for you!"  There were THREE more light fixtures that matched that original one we bought for the one on the front porch!! These three were larger in size, but they matched the exact same style and make as the first one we bought 2 months before.

Someone donated them at two different times, and we were fortunate to be there both times on the very day they came into the store! 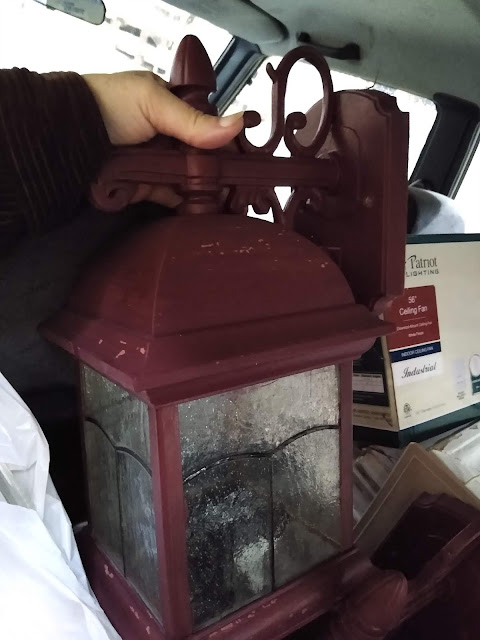 Wow, they were absolutely perfect! We had just been talking about wanting to add some exterior lights to the garage. The garage was newly built last year by the sellers, but they never got around to installing any exterior lights.

We snatched up all three lights and took them home. I gave them all a fresh coat of paint because they were a funny dusty rose mauve color. 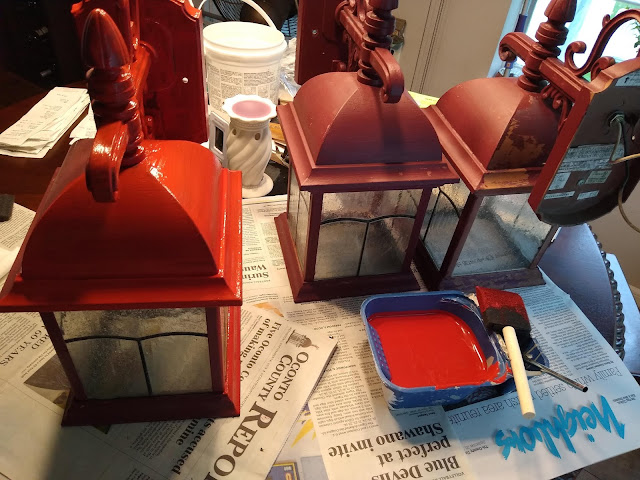 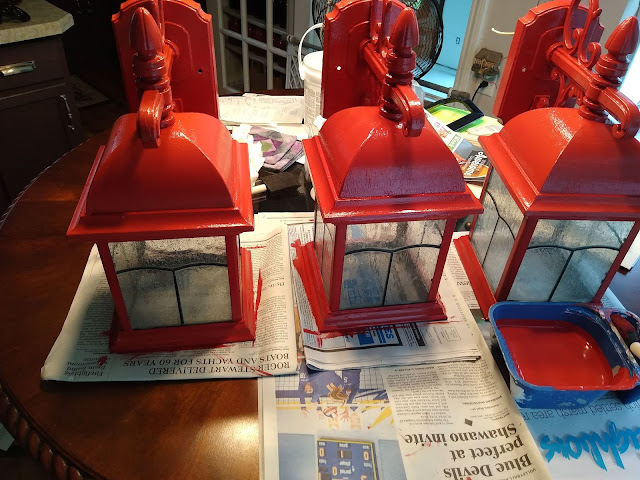 Steve wired up the lights so the two front ones would go on simultaneously with a 180 ° motion detector if anyone comes in the front or from either side. 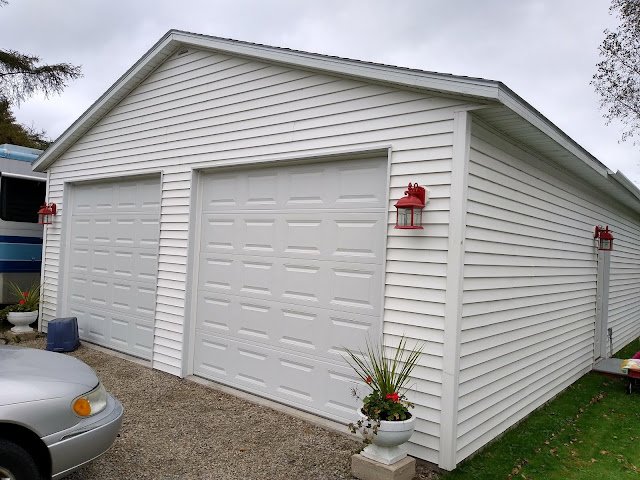 Aww those are just so stinkin cute! 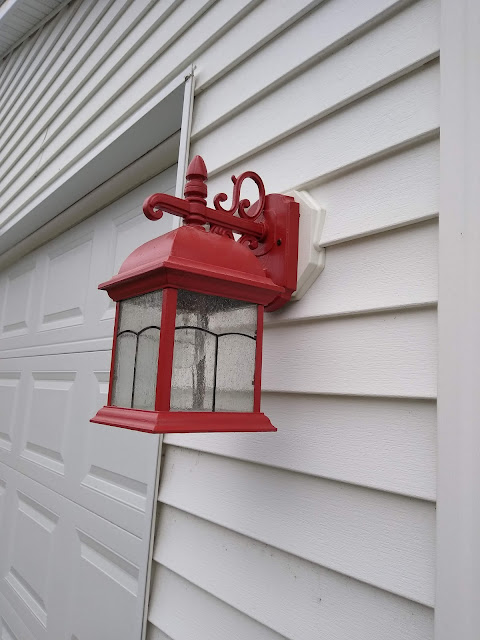 At the same time, the ReStore also had this decorative vent piece to go up on the gable of the garage. That was faded out hunter green. So again, with my handy little red paint brush, I made that match too. 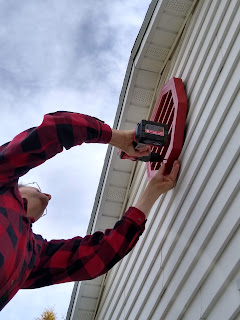 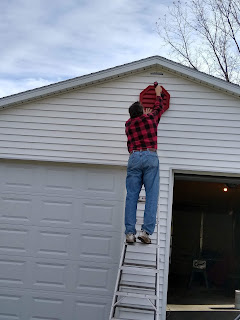 The third light fixture was put on the side of the garage by the passageway door. In that one we put a screw in motion detector light bulb that would go on any time we opened either door. The detector is built right into the bulb!  So when coming from the garage or from the she shed, it turns on to  automatically illuminate the walkway between the two buildings. 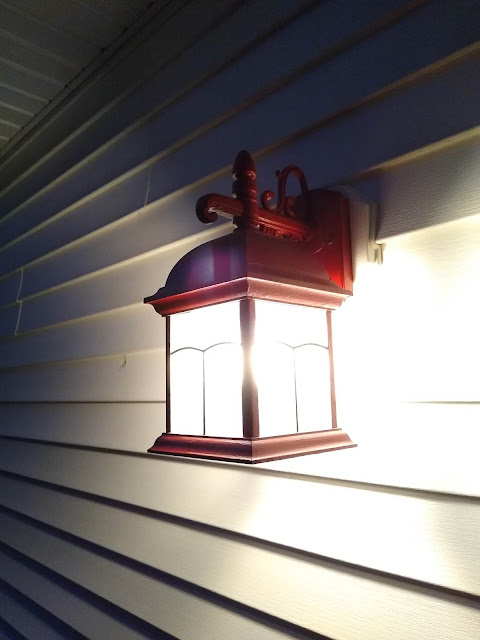 Now the garage has a little more stylish pizzaz that matches the house, and new usable lights that make our yard safer to maneuver after dark. 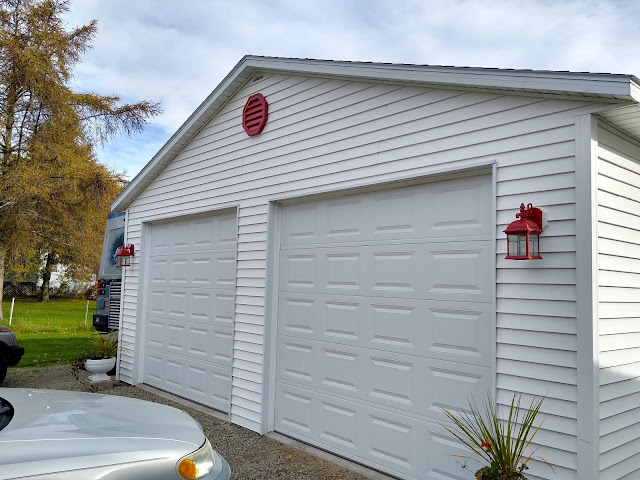 This is just about it for the She Shed posts...

We are just laying the ceramic tiles in the entryway and are about 2/3 of the way done.  Steve is suffering from a sinus thing today, and I am not quite up to snuff either. So we laid low, watched football and I did some weaving and made some cool snowflakes from dollar store hangers.  Will post more about those tomorrow. Stay tuned!
Posted by KarenInTheWoods at 9:38 PM

Labels: cubby hole, enclosing garage stall to make she shed, exterior lights, habitat for humanity restore, hand rail, making a She Shed, making a she shed out of an attached garage, next steps for she shed, stairs