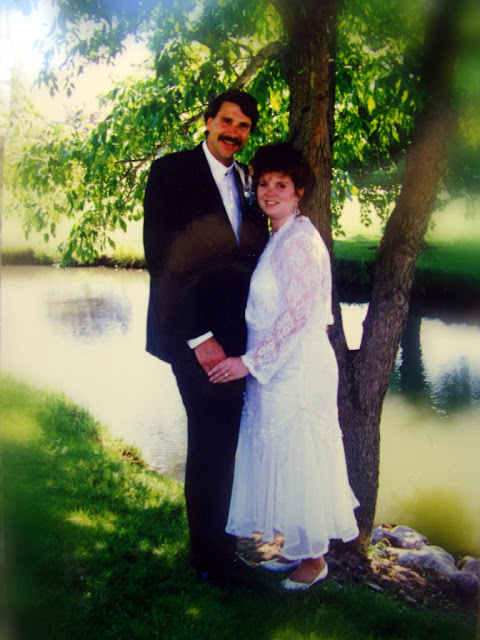 It was a magical day-- we were married in a historical church in Heritage Hill State Park. 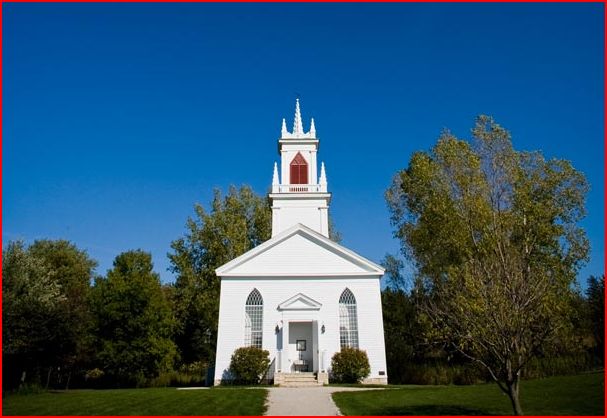 How fitting for two folks who love camping sooo much, to get married in a State Park?
We also camped for our two week honeymoon in our RV, circling Lake Superior.


Our wedding day weather was perfect, and we arrived at the park in style.
We had a driver with top hat and tails, a pair of fine horses
and a white carriage like Cinderella! 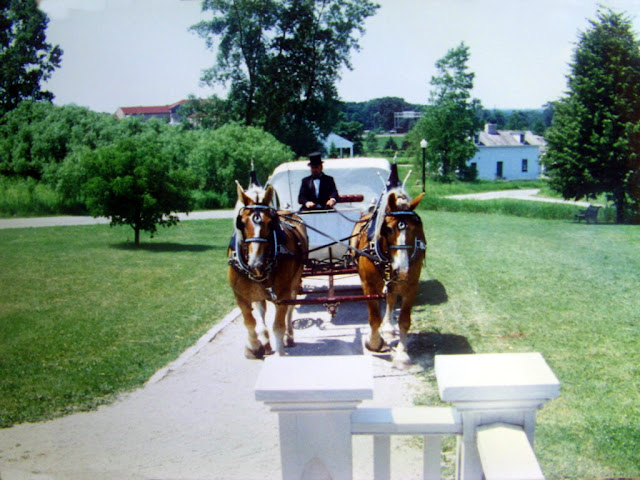 I felt like a princess in a fairy tale... and had found my Prince Charming! 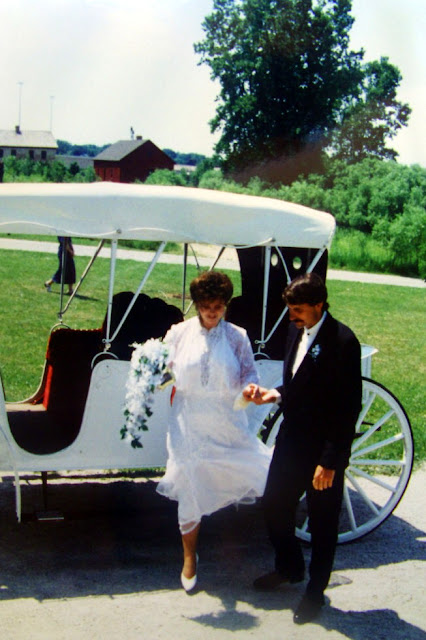 We shared our vows in front of our families and friends..
with our children taking part in the ceremony. 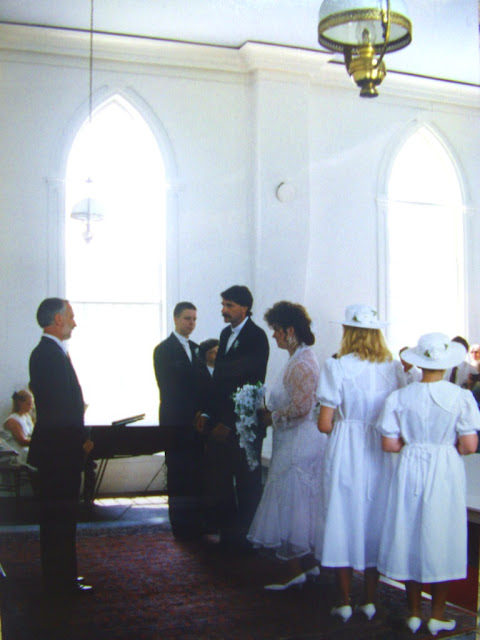 Oh gosh, this is the Happiest Day of our LIVES! 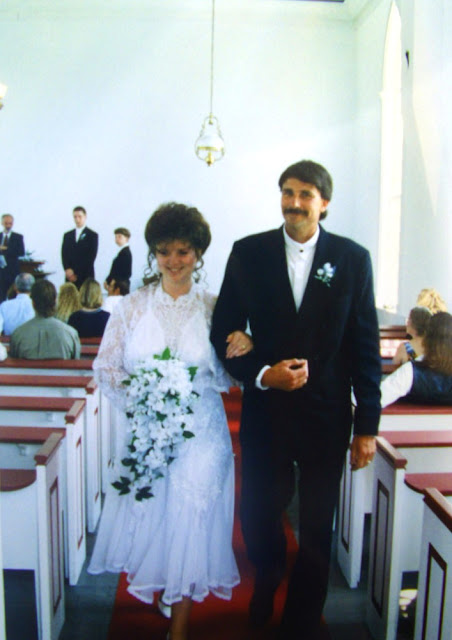 Our four lovely children were our Best Men and Honorly Maidens. 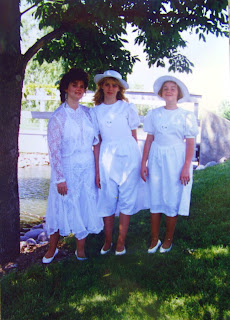 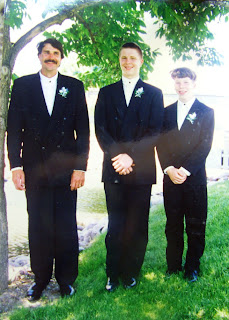 And here is our new family! 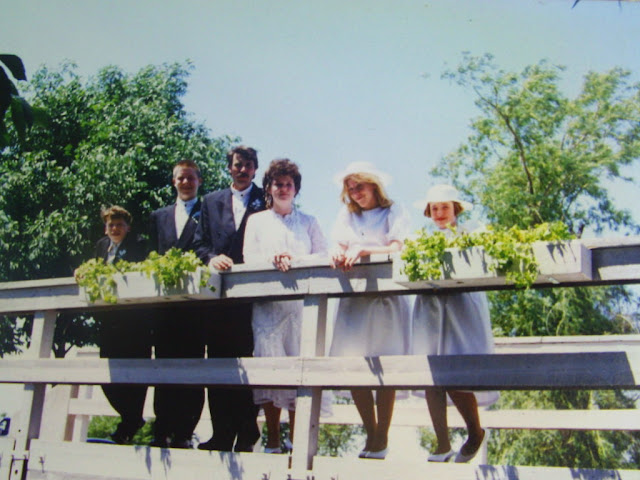 The carriage had escorted us to the church, and then brought us to our reception
in a lovely park setting on the grounds of Willowbrook. 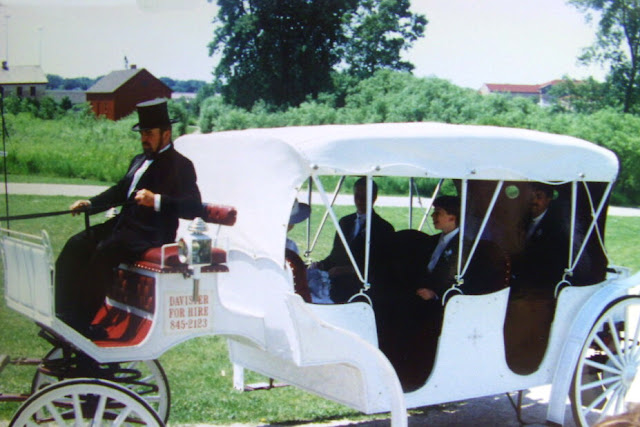 We rented a large tent, catered in a Spanferkle (pig roast)  and had a great picnic afternoon family picnic type reception.   My boss offered this lovely park setting for the reception location on the banks of the Fox River. 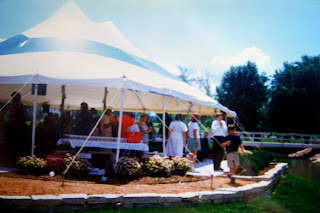 It was a warm sunny afternoon.  We didn't care for a late night drunken dancing party,
so an afternoon picnic was more our style.   Friends helped with the setup for us.
Soft music, good food, family and friends was all we needed to celebrate our marriage. 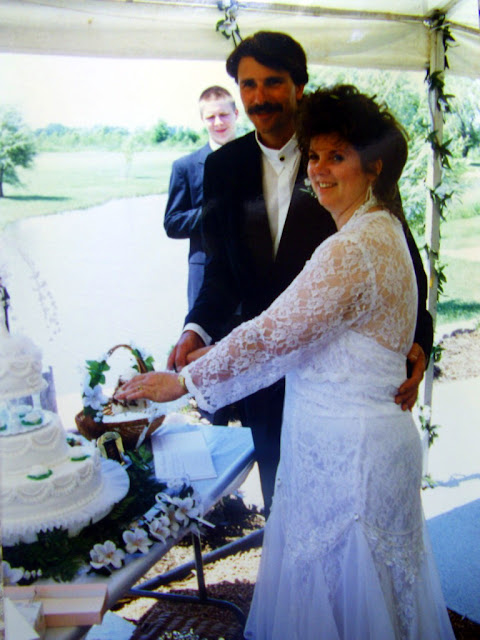 Steve later swept me away in our little Fiat Spider convertible...
to a cozy bed and breakfast for our wedding night. 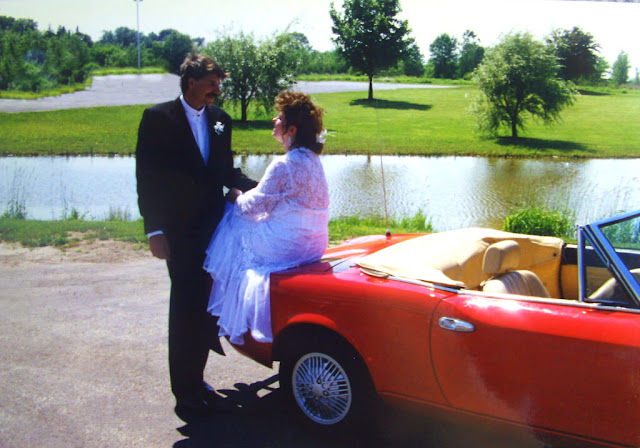 He bought me this little car for a wedding present! 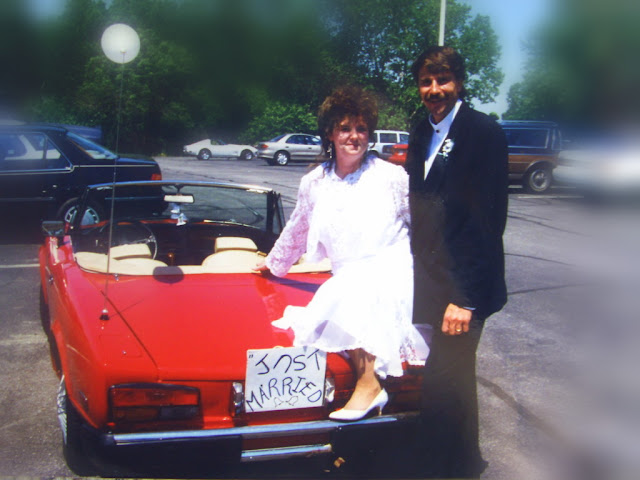 Thank you, Steve, for making my life more wonderful than I could have ever expected!!!!! 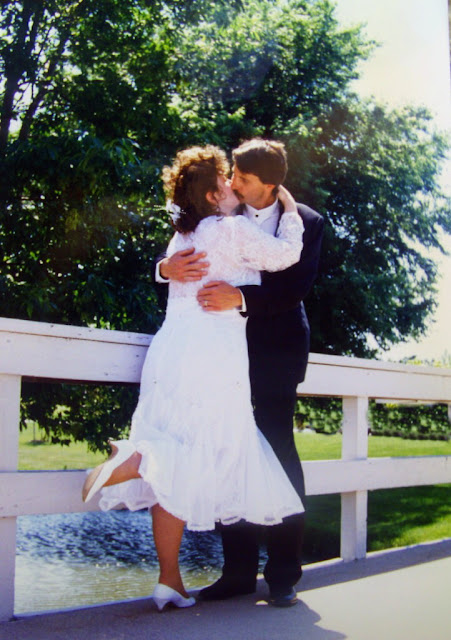 Cancer Again in the Family, and Our Old House Lights.

It's been a rough time for my family....  we laid to rest another member who had cancer rapidly spread all over.  With such sadness we said goodbye to my dear cousin Roger.  A proud Vet... a family man, husband, father, brother, uncle, grandfather and all around good guy. My heart breaks for his wife Meg. His family gave him a very dignified military funeral. We attended last Saturday and shared our sadness with all of our cousins and parents. 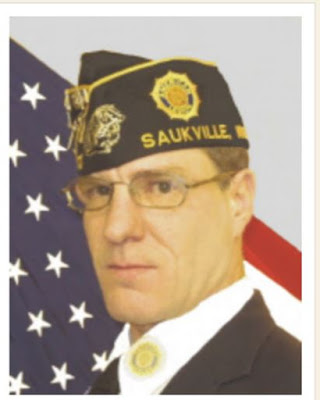 Cousin John flew from Wisconsin to Florida, and drove up his parents and my mom in time for the funeral here in Saukville, Wisconsin. Afterwards he drove them all the way back down and flew home. Thank you John, you are earning your angel wings here on earth!

Roger and I were "kissing cousins" as kids. We were born only a month and a half apart. Our mothers were only siblings to each other and very close.  They took turns having babies, until each one had six kids!  Mom and I are on the left, Auntie Lois and Roger are on the right.... 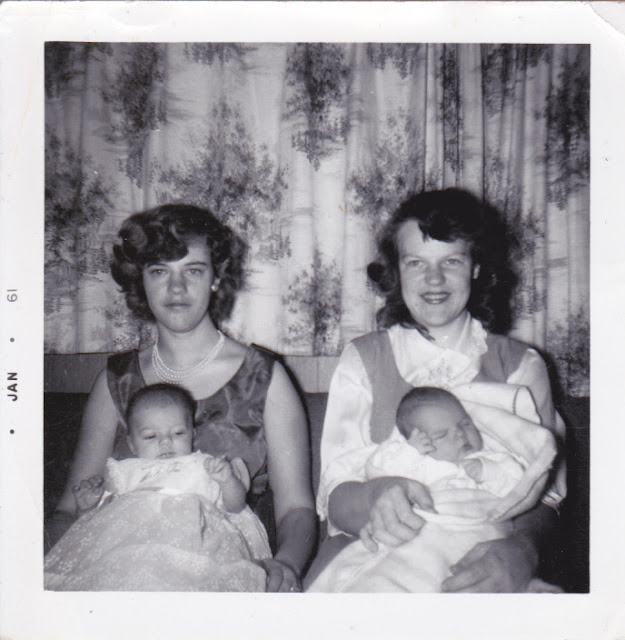 Roger is the first boy I ever slept with...(at the age of two!)  We went to Parkview School together during the week, we were in catechism classes together on Saturdays, and then begged to sleep over at Grandma's to be together on Sundays!  He always swore that he loved me and wanted to marry me---- awww Meg was a lucky gal to be married to him. 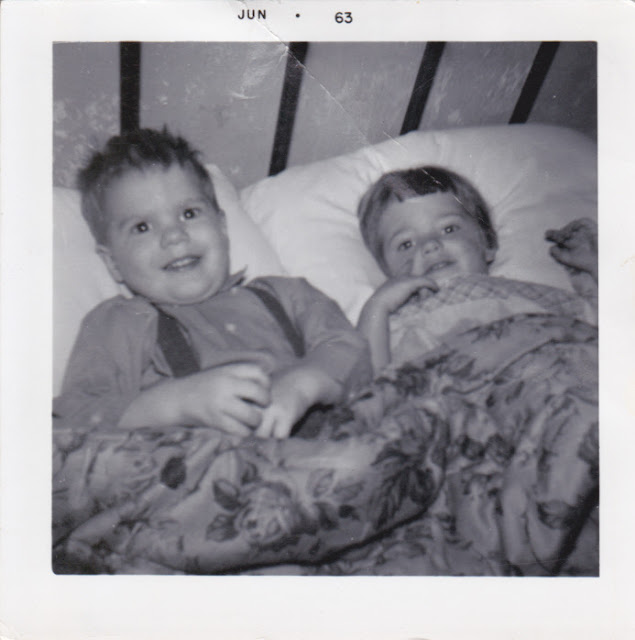 With six of us kids in our family, and six of the Statons in their family, we had to take turns sleeping at Grandma's house. Sometimes it was us four oldest ones, (Butch, John, Pam and myself)  so Roger Dodger would get left out. Awwwww   But we made up for it during the week and always found ways to get into mischief. Our families were always together and we were more like siblings than cousins. 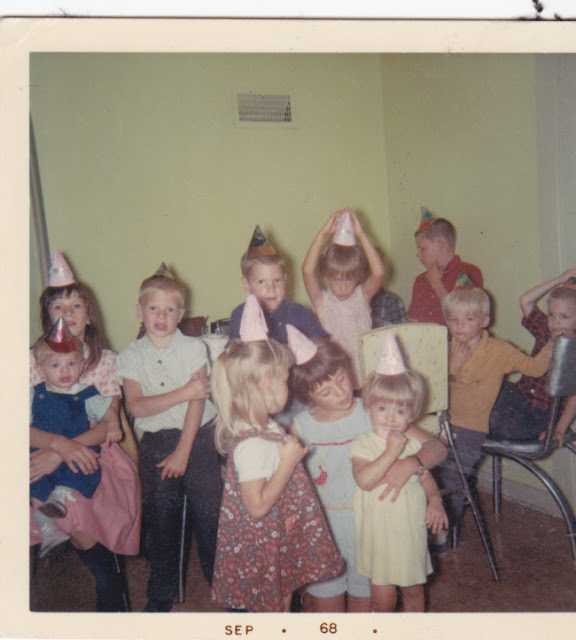 All of us would converge on Grandma's house on Saturday.  Our moms would catch up on grocery shopping or laundromat runs if their washing machines were on the fritz.  All of us cousins would hang at Grandma's house to play and take turns walking the few blocks to church for our appointed times for catechism classes.  Different ages went different times of the day.  Rog and I were in the same class together, so of course we had to walk together.

I remember during the winter, we would stop at the green wooden box on the corner of Western and Washington.  We would lift the lid and take out the biggest and least dirty pieces of rock salt from the mix!  We would suck on the rock salt pieces during catechism class and again refill our pockets on the way home.  One time, while we had both of our heads holding up the lid, as we were filling our pockets, our mothers drove by in the station wagon and beeped the horn at us!  Oh my!  We dropped that lid as fast as we could and beat our little boots up to the church!   We sure got in trouble afterwards, and I don't think those nuns at St. Francis Borgia could have reprimanded us any harder than our own mothers did. 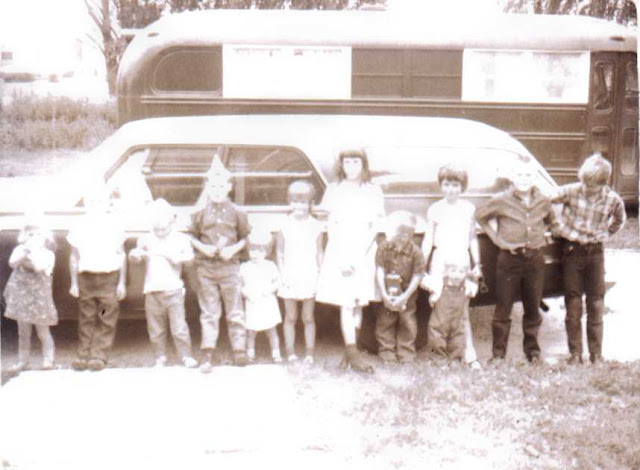 (plus the "grocery getter" station wagon and our old Camper Bus in the background!)


Good bye, Rog Podge.
Share some time with Grandma Kafehl in heaven
until the rest of us tribe of cousins get there!

Another close family member of mine is facing a cancer surgery this upcoming week. Please pray for him in his battle.  When oh when will there be a cure for this ugly disease?

I know I haven't been blogging much.  It seems like all this family stuff has come up. Cancer has been hard to deal with when your loved ones have to keep battling it.  I don't know if there is more cancer now, or just more diagnosis.  I think years ago it was called "consumption"  meaning your body was wasting away?   It just is so awful.

This weekend is hot hot hot and humid in Wisconsin.  Not the best weather with my lung problems.  So we decided to stay close to home today.  Steve had a few projects in mind.  I was the "gopher" and the picture taker.

When we bought this lovely home in 2012, there was never an outside front porch light.  The few times someone wanted to find our house in the evenings after dark, the number is not visible and the big tall pine tree blocks out the light from the street lights. (thankfully)    But the times that we have wanted some light out front, we don't have a switch to flick or a light to turn on.

Two weeks ago, when Steve and I were in the Menards home improvement store, I found this wonderful old craftsman looking light with stained glass in a pleasant square shape.  It came home with me, and I decided to spray paint the frame dark hunter green to match the house, instead of the black metal that it was originally.

Steve analyized the wiring and the best way to get power out to the front was to connect to power at the current ceiling fan in the inside front porch.  Then both lights could operate from the same existing switch in the foyer. From there he could shoot out with a long drill bit and mount the light outside over the front door.  Perfect plan!

He grabbed the drill before 8 a.m. this morning and went to work on it.  You know him, Mr. Zoom Zoom!  I hadn't even finished my first cup of coffee and I was getting this, grabbing that, holding this or taking pics of that. 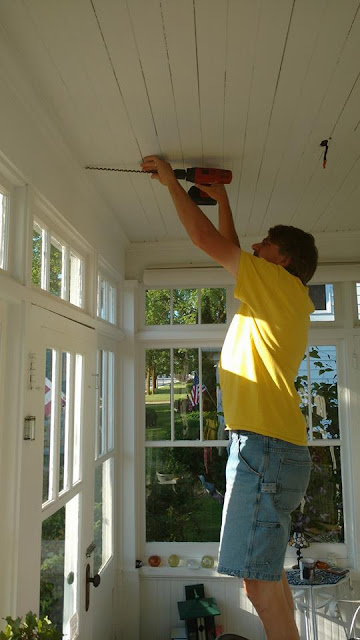 We never really liked the ceiling fan out on the porch, and never used it much.  But we did still have an antique light shade unit that matched four others in our home!  We picked up a new white base for it to coincide with the new junction boxes and new wires that Steve installed. I just adore these old clear ribbed glass shades. The previous owners left us a stack of them on a shelf in the basement, and we have put them up in the hallways, our walk-in closet, and in my fiber storage room. 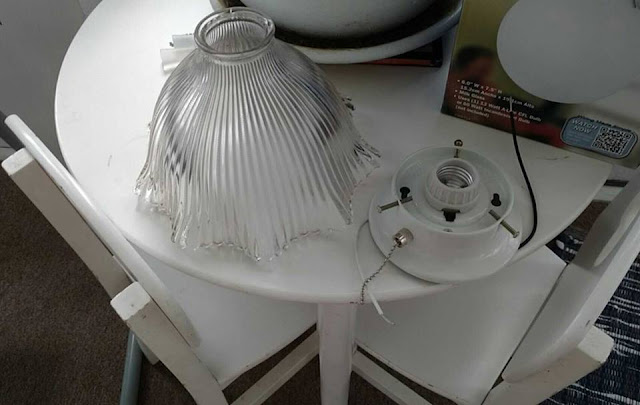 Once Steve removed the old ceiling fan, he cut the hole bigger to hold the junction box.  Checking inside with a flashlight, he realized the ceiling wasn't a normal one with joists nor having an open space spanning across to get the wires out to the front porch. Nope.  It was all blocked in with wide boards and no way to drill or fish a wire through unless we ripped down the porch ceiling boards! NO WAY!

Sooo --- on to plan B.    After careful measuring (three times!)  Steve grabbed the drill and made the final hole from the inside to the outside while I watched for it to come through. We bought a strip called a wire channel that was white and would blend in with the ceiling as best we could. 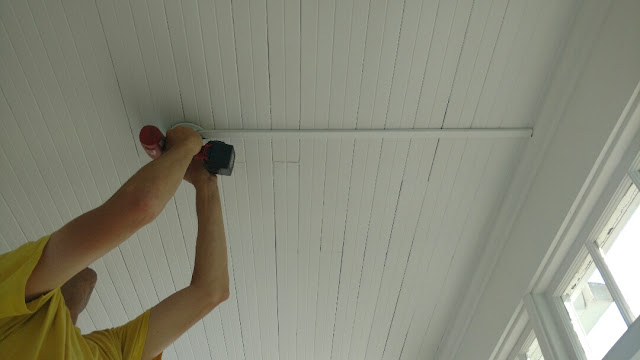 In just a few short minutes, he had the inside light wired up and operational,
and the new line fed through to the outside for the new light out there! 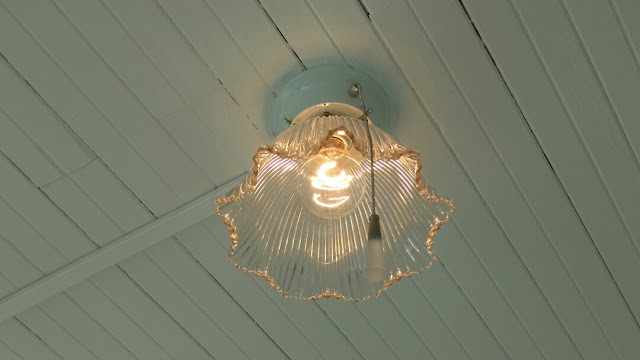 It was heating up outside, nearing 9 a.m.  so we better get this thing done quick.  The porch is on the east side of the house and we were beginning to drip with the humidity.  I brought tools and helped measure, but soon it was a One Man Job up on the ladder.  I was able to sneak across the yard (in my jammies yet)  and snap this pic.  What a guy on a Saturday morning.... 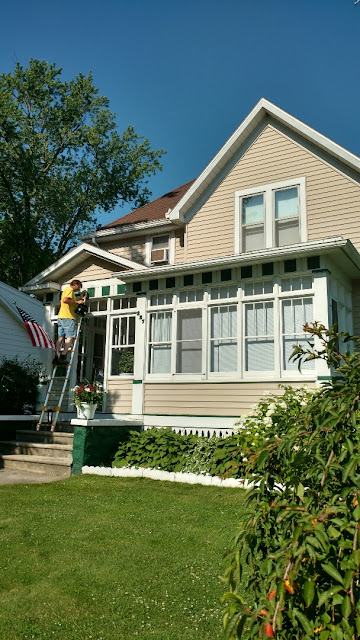 In no time, again, he had the outside fixture wired up into place. Both the inside and outside lights are connected to the same switch in the foyer.  I got to throw the switch to see if it worked. 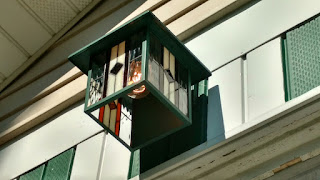 And there it is... I am hoping tonight after dark we can turn it on to test it to see if it illluminates the old wooden house numbers to the right of the door.  It only carries a 60 watt bulb.  I would hate to have to move those numbers, they are very old and would leave marks and holes in the white spot they are at now. 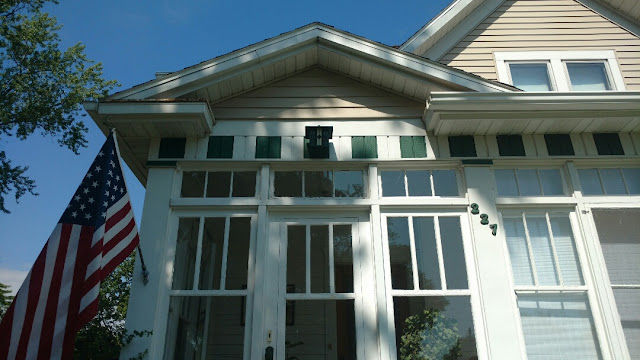 It's after 8 pm and temps are finally dropping.
We might get out and about with the dogs for a walk before dark.
Thunderstorms due later tonight.  Ewwwwwww 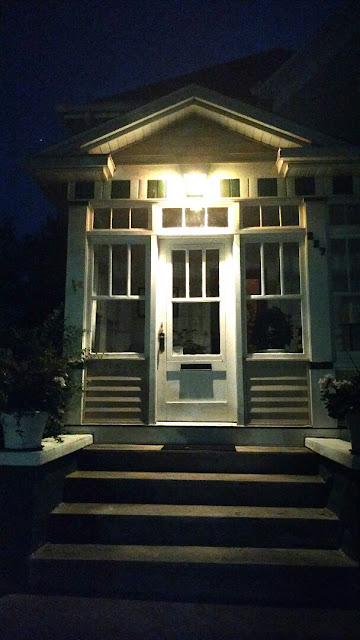 Posted by KarenInTheWoods at 8:35 PM 5 comments: