In my last blog, I mentioned about picking up a new propane Blackstone Griddle. We bought the 17 inch size because we want it small enough to take camping. It's good enough for the two of us to create a meal or we could sneak on enough for four people or more if we needed to.

We decided after just frying up a couple burgers, now to try to make one of our absolutely favorite meals. This meal is made completely with items that are purchased at Aldi. We love that store!

We also use Aldi's extra virgin olive oil and a variety of spices in this recipe.

I grabbed a couple pats of butter that are on the tray in the pic below,  but I decided to not use them. We really didn't need a lot of oil to cook on the griddle and the butter wasn't necessary at all.

I gathered everything up on the tray skillfully made by our dear friends Rodger and Lila Thode of Washington.  It's such a nice big sturdy tray and can carry everything from the kitchen out to the back patio where Steve set up the griddle.

Blackstone Griddles are available for under $100 at Walmart and many other places too. Our friends Bill and Janet Edwards had one when we went camping a couple weeks ago, and we just had to get one for ourselves. It runs on propane and can be used either with the little propane disposable cylinders or with an adapter hose from a larger LP tank.

We had watched a few YouTube on different techniques and recipes. One of the things that was sold separately was called a steaming dome. You can set vegetables on the grill, give it a squirt of water, and set this dome over the top so they can steam inside. You can also use it to bake items inside like biscuits. We weren't about to shell out an additional thirty or forty dollars for the fancy domes from Blackstone website, instead I came up with this idea of sacrificing this blue enamel bowl. Steve then riveted on a nice little screen door handle and we have a perfect steaming dome! 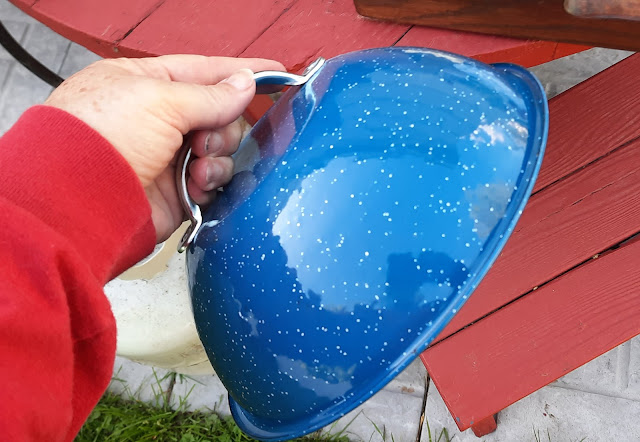 Steve started out with the griddle on high to get it evenly heated up. He spread on some extra virgin olive oil. We might have started with a little too much oil, but this is the first few times using it... so the oil can help season the cast iron of the griddle.

Once things were up to temperature we backed down the heat just a little bit. We piled on a stack of the Prince Edward's Medley frozen vegetables and also some fresh cut up asparagus to start out on the grill. We figured those take longer to cook than the sausage or potatoes.

After he tossed the vegetables around a couple times, he gave them a dollop of water to create steam and put the lid over the top of the frozen vegetables. The asparagus he was going to keep rolling around on the grill to fry at a bit.
Then he put the sliced onions and bits of minced garlic in the other corner of the grill to get that started. The can of sliced potatoes is drained of water before they are dumped onto the griddle. Now the heat is backed off down to about mid to low range. We weren't sure how fast it was going to cook?

We let things go for a while and flipped the vegetables around a couple times. Then we realized we could kick the heat back up to about mid-range to finish things up. The more we use it, the more we will get comfortable with what levels to set it on while we are cooking different items.
The final item was the fully cooked kielbasa sausage. We sliced it thin and laid it on the griddle to kind of brown it up and warm it through. We didn't want to fry it too long because then it would lose its flavor and become tough in texture.

We carefully watched and flipped each item around until we were sure everything was done. By timing the order in which we put things on the grill, everything got done at exactly the same time!
And here are the results!

This is one of our favorite meals, but we usually make it in the oven, baked in a casserole dish under a tinfoil layer. Now we know we can do it out on The Blackstone Griddle and it comes out even more flavorful and tasty. Doesn't everything taste better when you cook it outside?
~~~~~~~~~

Yesterday we had TWO graduations to attend!

The first one was for our grandson Clayton. He was graduating from the Elementary School 4th grade and will be moving on up to the Middle School next year. They had been given a tour of the middle school so they would know where they are going next year and ease a little of the apprehension that comes with starting something different. They will be changing classes instead of being in one set classroom like when they were in the elementary school. So it's a time of change for him.

They had a special celebration for the 4th graders held out at a beautiful little city park just south of town. All of the students were given a special surprise of a t-shirt from the school and they were all given permanent markers to sign each other's shirts. Can you imagine this many 4th graders running around with permanent markers? ACK!

Then the parents were asked to come attend, as well as Grandparents, for the rest of the event. Clayton was very happy that he collected 30 signatures from friends on the back of his shirt. Of course, Grandma and Grandpa got to sign it too!
During the awards ceremony, Clayton proved that he may be a big boy going on to 5th grade, but he's still small enough to sit on his mom's lap. AWWWWW 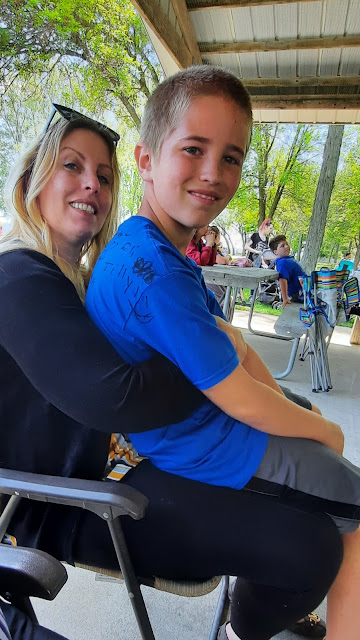 Each child received a diploma sending them on their way to Middle School. 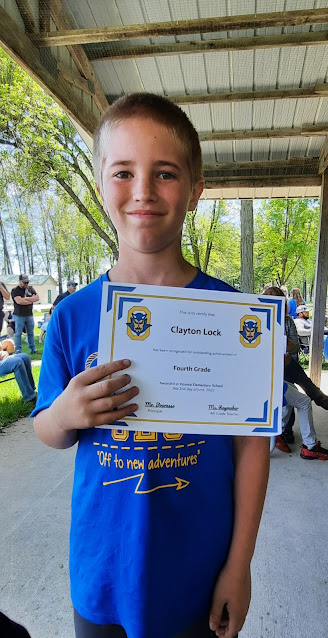 Proud of you, CLAYTON! 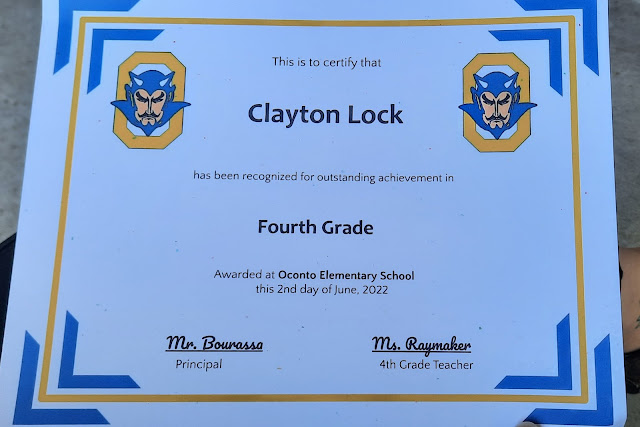 When the event was over, his mom had to go back to work. The children were allowed to leave with their parents or else they had to return back to school with the teachers. Instead, we went for the third option, we stole the kid and took him with us. We had a couple errands to run and he was very happy to go for a ride in the Mustang convertible! Cool dude.

Every kid loves to ride in the back seat and raise their arms to feel the wind. Just like a roller coaster ride! 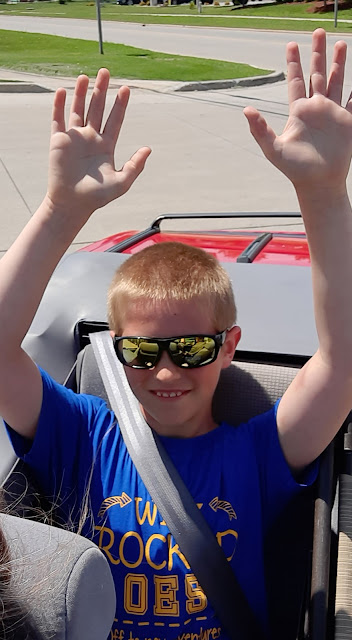 When we got back to our house, one of the first things that little guy noticed was that our backyard had very very tall patches of grass. It had been "No Mow May" and we left the grass growing with little violets and dandelions. This is to help the bumblebees get their early nutrients before there were enough other flowering blossoms out to gather nectar.
We know just why Clayton noticed, because he was antsy to hop on the zero-turn rider and get to do the lawn. 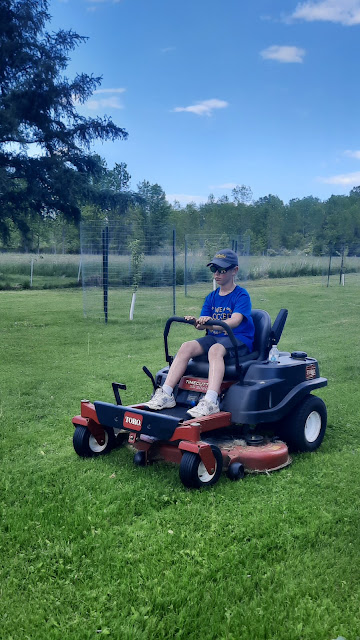 He did a great job, always under our supervision, and when he was done he even helped to clean off the mower before it was safely stowed away in the garage. A little bit of green folding money went in his pocket for a job well done. Thank you Clayton!
Now we had to drop him off at his house when his parents got home, and head on over to a dinner out with our oldest grandson for his eighth-grade graduation!
Our daughter Heather and son-in-law Jesse invited us out to River City Steakhouse for a nice dinner. That was so sweet of them.
Then from there we went over to the middle school to see our oldest grandson graduate from eighth grade. He will be moving on to the high school next year. Oh my, where has this time gone? This young man is now taller than me and he is growing up so fast. Where was that first little grandson baby I held in my arms 13 years ago?
I found his name here on the program, so I guess that means he's really moving on up to high school. He had all A's and one B so he was on the honor roll! We are so proud of him! 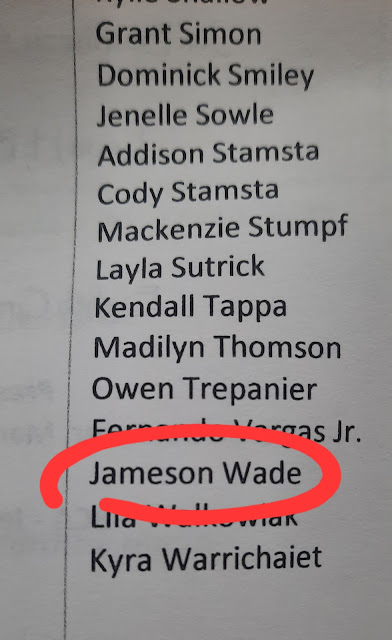 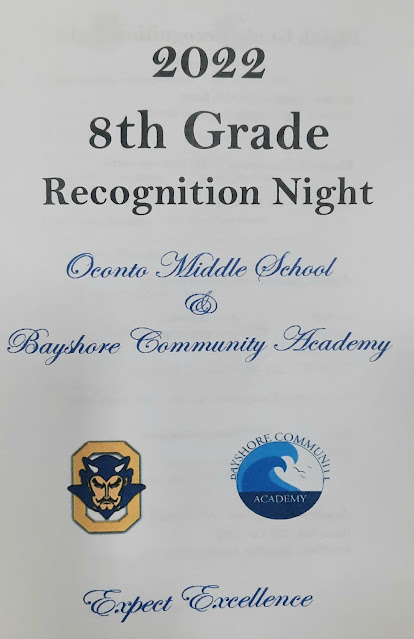 The gymnasium at the middle school was packed to the rafters on the backside with everybody attending the special awards night. We got there early, because I was worried we would end up sitting on the other side where you really couldn't see anything because there were so many people attending.

All of the young men and women were trying to be as poised and confident as they could. This was a big change for them now to move on up to Middle School. Many of their opportunities ahead of them include choices of curriculum and even some of their classes in high school can already earn them college credits.
As I looked at all of their faces, I could see all the different stages of confidence or insecurity, I could see the ones trying to find where they fit in, and ones who were trying to be different. I could see ones who were scared and apprehensive, and other ones who were confident and eager to get this over with. It was very interesting looking at all of their faces.
Two of the valedictorians from the high school came to talk to them and urge them to make the most of their upcoming four years in high school.
It was a long program but it was wonderful to see him take this next step in his young life. 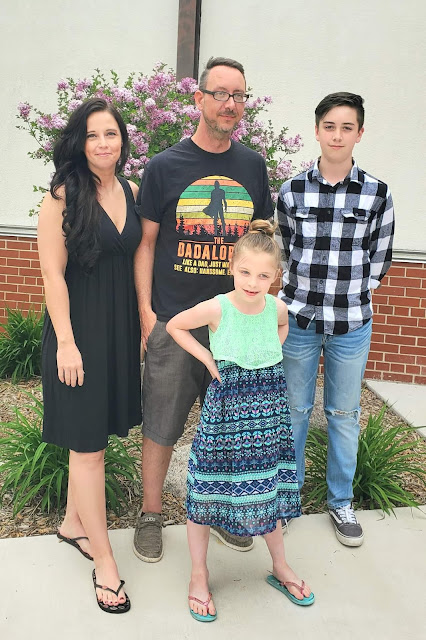 Our butts were sore from all the sitting all day long and it was good to get home and pop into our jammies for the evening.

Boy oh boy, do we feel old. I thought these grandchildren were still babies? 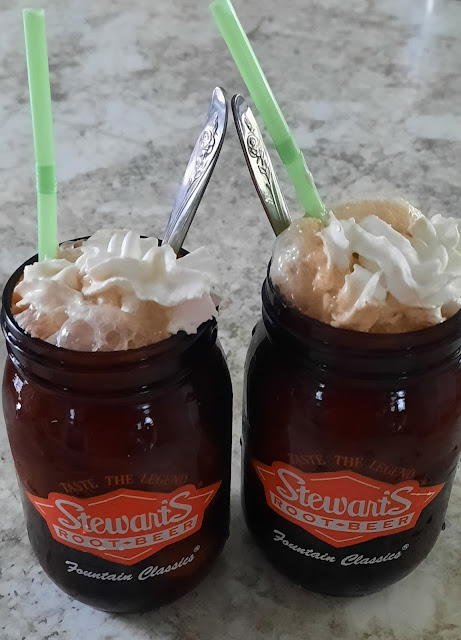 Tonight we had root beer floats in these very same promotional mugs that we saved from our first date, 27 years ago!

Happy First Date Anniversary to us, here is to many many more!

Posted by KarenInTheWoods at 8:39 PM 2 comments: