CAMPGROUND REVIEW- North Bayshore Campground, Oconto County Wisconsin - Gallon of Diesel to Get There, Gallon to Get Back Home -

Yep, that's about what it takes to get to the campground and back again. LOL

It takes about eight to nine miles per gallon on our motorhome, and that's how far the campground is from our home.

We saw the impending icky winter-like weather coming next week. We had a window of one to two days of warm weather maybe hitting up to 70 here in Wisconsin (but with high winds).   We didn't want to go too far. Anyone driving an RV of any size knows that winds are not fun and can be dangerous. Especially on open highways and interstates.

So we decided to load up the rig and go exactly six miles as the crow flies, eight miles by road, to North Bayshore County Park of the Oconto County Park system. It's one of the few campgrounds that are open at this time of year in the month of April in  Northeast Wisconsin. Many of the State Parks and National Forest Campgrounds don't open up camping till mid May or even June 1.

We tossed in some groceries, a few gallons of water in the fresh tank, grabbed the dog and some jammies and hit the road.  We didn't bother hooking up the Saturn just to go 8 miles. I followed behind Steve while he drove the motorhome. I stopped and took this picture while I was at a stop sign, because I try not to ever text and drive-- nor even take pictures and drive.

We scooted it up the highway for 2 miles, then taking the next exit to the right and headed on the County Road A and then Y over to the campground. We've been here many times before and we know which sites are favored. Some sites are only 30 amp, others are 50. Some sites have water (but not turned on yet this spring), others do not. Some sites are really meant for tenting only and don't even have a parking pad for an RV.
We chose site 26 and went to pay for it at the new online electronic kiosk that they now have installed over at the boat landing. From the kiosk, the fishermen can buy the boat launch permits or the campers can buy their camping site right there as it connects online with a credit card.
It's hooked up to immediately connect with the website and lets it be known on the website that now that campsite is taken and occupied for the night. Reservations are also accepted on the website. If you wanted to take a site that was already reserved, it would notify you on the screen and and ask you to choose another site. That's a pretty good system! But it does NOT accept cash or checks, so you do need to have a credit card. It only takes MasterCard and Visa, not American Express. But you can also do the same procedure online with a smartphone. There is cell signal there, it's a little weak, but it still works.

It didn't take long to get all set up because we really didn't have a lot with us. It was getting windy so we weren't about to put out the awning. The most we did was take out a couple of lawn chairs and relax with a beverage or two.  It was Steve's birthday on Friday, so he is "celebrating".

The weather was amazingly beautiful and warm by Wisconsin standards in April. We were able to sit outside on the lawn chairs for a while and soak in the sunshine. Steve broke out the grill and we threw on some burgers and whipped together some salads.

Food always tastes so much better when it is cooked outside. The winds were kicking up a little bit and we decided to go inside to eat.  I set the table and sliced some tomatoes and we enjoyed our meal.

Oh my goodness...
better than any fast food joint. 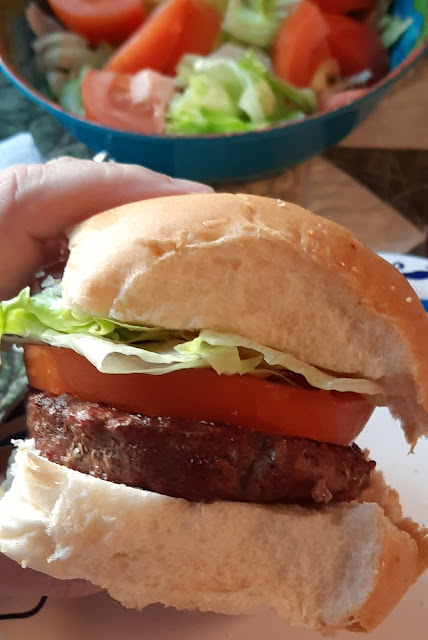 After supper, the sun was starting to set. We managed to pop the harness on the little stinker dog and take a walk around the campground. There were only five or six other campers there, mostly fishing people who were out in their boats until sunset. It's the walleye season right now and the boat ramp was full of pickup trucks and boat trailers, and happy fishermen catching their fill.

Binney had a good time doing some "sniffing" and we ambled around the campground in the setting sunshine. It was peaceful and relaxing, with only the hum of a boat motor every now and then coming into the harbor. 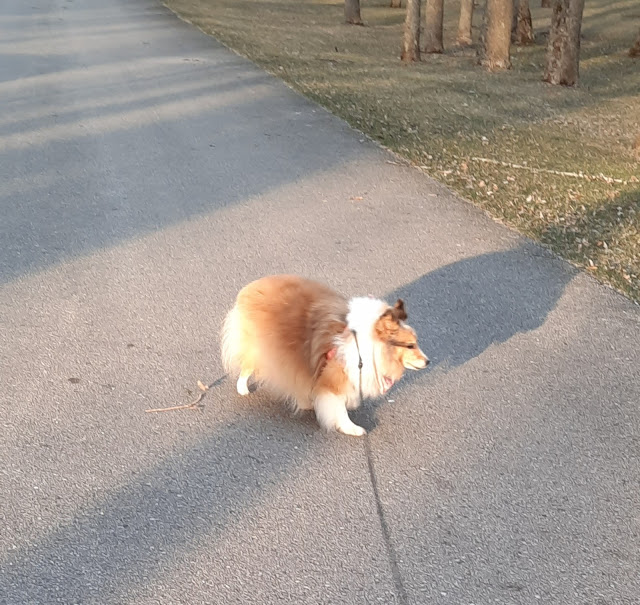 We walked down around in the little harbor area that is protected from the winds by two large breakwater banks.  We watched some of the boats loading up after their day of fishing was complete. Was a little too cool to go out on the breakwaters that surround the harbor.

We were walking back to the motorhome, just as the sun was setting over the top of the roof. It sure felt good to be out camping for the first time of the season.

Binney decided she had enough walking, and hopped up for a snuggle as we watched the sunset through the trees to the West.

We went inside to clean up after our dinner and tuned in the tv to check the weather.  It was going to be okay for the night, but on Sunday morning the winds are going to kick up to the 30-40 mph range and gusts much higher!  Binney was happy to snuggle in and watch a movie instead of doing a campfire.

It was a cozy warm evening in the motorhome. With the electric hookups, we could run a little electric heater and didn't need to start up the propane heater or the Olympian Wave 8 catalytic heater. Plus we have an electric mattress pad heater on the bed which makes it quite comfortable to sleep for the night.
We blissfully fell asleep to the quietness of the woods and not a sound around. In the morning at about 6 a.m. I could hear the tiny pitter-pat pitter patter of raindrops on the roof. That's a very comforting feeling to be inside and dry and warm as you hear the rain coming down. It rained lightly until about 7 and then stopped.
I got up and made a cinnamon coffee cake from a Krusteaz coffee cake mix. The camper smelled just delightfully delicious with the baking coffee cake and then Steve perked up a pot of fresh ground coffee beans. As we sipped our coffee, we watched the local weather reports because things can change around here in an instant.  But no, it was warning that later in the day it was going to be worse. So we thought we might as well get out and take a little walk around before the winds kicked up. 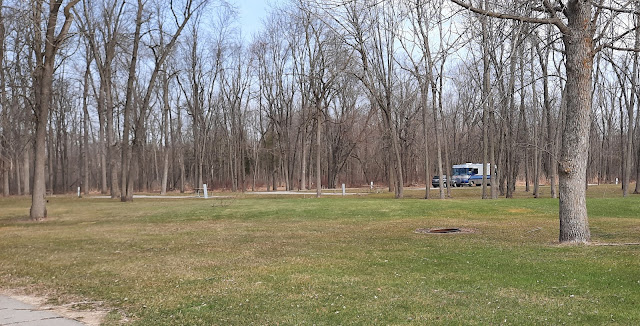 We wandered on through the campground, there were only two or three campers now --- the others had left early in the morning. We headed on down towards the harbor again by the little shower building and wood firewood kiosk.

All of the sites that are closer to the harbor are black topped, some of the sites further away are gravel, and a few of them are just grass covered, more suitable for tents. But they are all pretty level and nicely kept lawn around each one, as well as scattered trees for shade. There's enough distance between sites to be comfortable, where you are not stacked on top of each other.  There really isn't a swimming beach, but there is some playground equipment for kids.

Along the little harbor is this cute boardwalk with some benches, just perfect for fishing. The water is a little deeper in that spot, and you can tie up your boat if you are camping nearby.

We sat for a little while on a bench and watched a few boats go out ... but not nearly as many as the day before. The winds were kicking up and you don't want to be out on the Green Bay when there's white caps. The shallow bay and the winds kicking up fast and it can get dangerous really quick. Little Binney said it was time to go back to the camper because it was getting pretty windy.

The waves were starting to come into the harbor,
so it was time to get a move on.

The sun was trying to poke through the clouds a little bit, and they were blowing by awfully fast up above high over our heads. We decided it was probably best by about noon to head back to our house.

Here's a little bit about the campground:
Link to their website:  North Bay Shore Oconto County Park
And from their website:
North Bay Shore Recreation Area is located on the west shore of Green Bay North of Oconto. There are 34 daily sites and a group site to accommodate your camping stay. Campers may make reservations up to a year in advance (from the start date), and reserve for a minimum of two nights (three nights on holiday weekends) and a maximum of 14 days. Reservations may be made online.  Single Site RatesMonday - Wednesday $15 (Non Holiday)Thursday - Sunday $30
Services & Amenities

Instead of driving up onto the highway which is only a mile or two stretch, we decided to avoid the winds, especially the exit ramp to our house which is a flying overpass ramp.  It's best to avoid those situations when the winds are gusting. So we decided to go home on the back road along the shore and drive through town.

We got home and unloaded in no time flat. We didn't have a lot with us. Steve drained the water from the tank because we are going to have cold weather this week. We're going to be down in the freezing twenties at night, and only in the 40s during the day.

This little Springtime jaunt was well appreciated, knowing that we are facing more wintry weather ahead, with the possibility of even some snowflakes this week!

Posted by KarenInTheWoods at 5:40 PM 5 comments: