Trying to catch up here....

First of all, we went for the very first time and got our first ever flu shots!  My old pulmonologist was always telling me no no no to not get it. My immune system is so low as it is, and not to get the shot and bring on more to the immune system to deal with.  Okayyyyyy   That pulmonologist is now long gone and passed away, and my new one says "go for it?"

And yes, we both got sick within the week.

I know all the blah blah blah about it not being a live vaccine, but we both got the shot on the same day, then we both got sick with the flu together on the same day 5 days later.  Coincidence? We rarely get sick at the same time, it's usually one of us first and we give it to the other one... sharing is caring, right?

We were both so sick with the flu, we missed out on a special fundraising benefit up in the UP of Michigan.  My sister and her husband got in a motorcycle accident.  They hit a deer!  They will both be off work for a while, with contusions, some broken bones, brain swelling and lots of road rash.  We are SO thankful to God that they are both ALIVE!  That is all that matters!

But, their budget will be strained by not being able to work for a while.  Friends and family put together a big benefit with a spaghetti dinner and raffle prizes to raise funds to help out with medical costs, travelling and things insurance doesn't cover.  I donated a bunch of of my handmade items, including this quilt that I sewed on morning noon and night to finish in time to send up with my brother two weeks before the event.  Good thing I did, because we were both way too sick to attend. 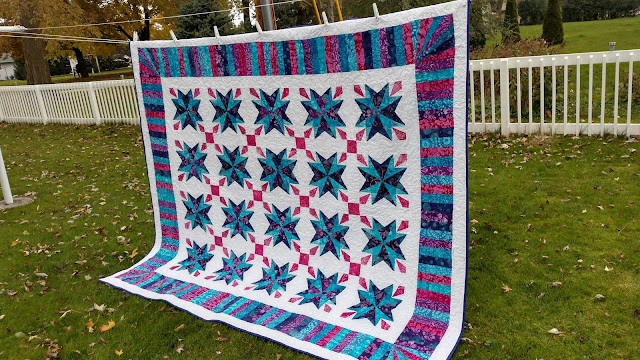 Before we knew we would be getting sick, the day after the shot we went up to visit Steve's dad, in Door County.  We had "projects" to work on for Pops!    He has these three barstools that one needed to be covered. Steve found him some brown vinyl at the Habitat for Humanity ReStore and I set to work covering the stools (without any sewing machine at hand).

I cut out 3 big circles,
needle basted around the perimeter with thick carpet warp,
and gathered it around the existing stool seat.

I pulled the vinyl around underneath the stool, and stapled it down to the base with my handy dandy staple gun. A few tap tap taps with a hammer and it was done! 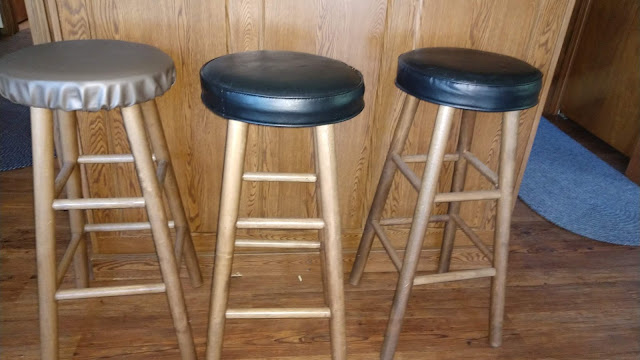 I finished up the other two stools in no time,
once I figured out what I was doing. 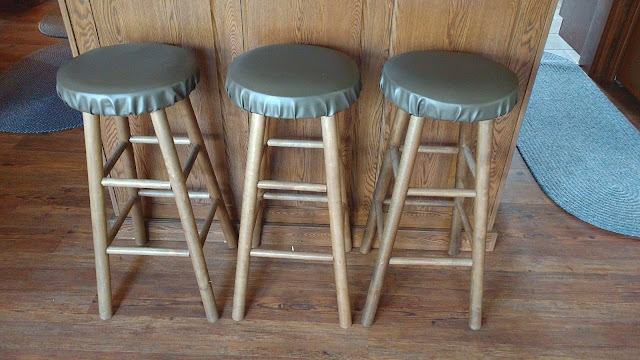 Now they all match.

While I was doing that, Steve and his brother Pete were working under the direction of the Lead Boss Supervisor.  He had a bunch of projects and things to get done.  He had the sons assemble a wonderful wood box, and they did it without even reading the directions!  (of course) 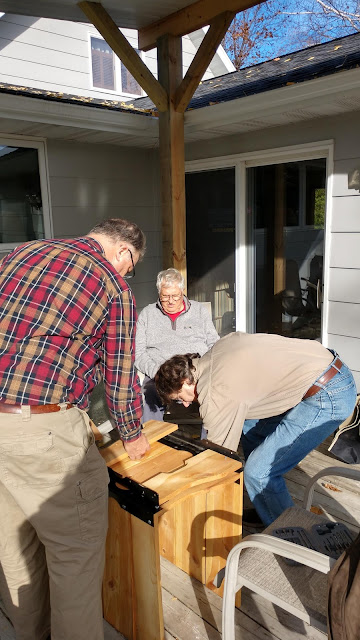 Their dad did have to run to town for the proper hardware, as the original bolts and nuts were missing.  The guys got the whole layout figured and assembled.  This will make a nice interior wood box setting next to the woodstove this winter. 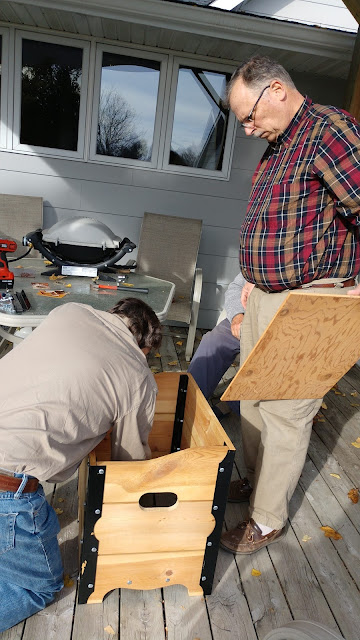 Of course, both of the sons had to haul some firewood now to fill the box, and fill the rack on the outside of the patio door. The easy way to haul from the woodpile is using the tractor.  How cool is that? 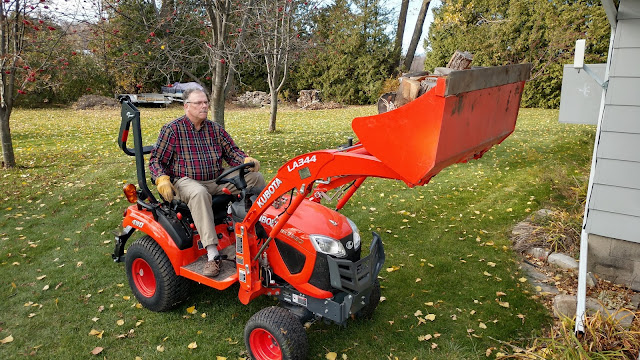 While the guys were busy with the wood hauling,
our dogs were visiting with their pal, Millie. 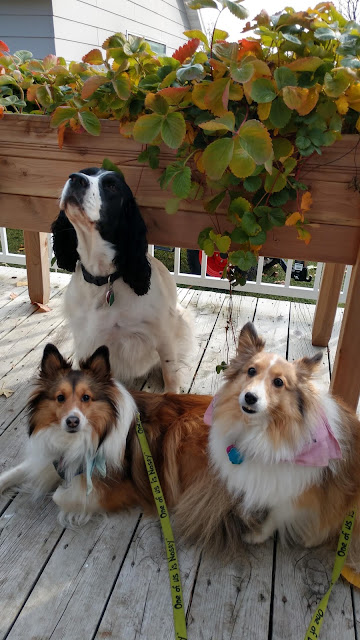 It is now a full week later, and we are finally starting to feel back to normal and even went for a mile or two walk tonight and cleaned the house a bit as well.

Steve was looking on the Facebook Marketplace and found an amazing upgrade to my quilting room projects. He found me a Hinterberg quilting frame and also a mid-arm Janome high speed industrial sewing machine (with double the throat space of my domestic Janome) 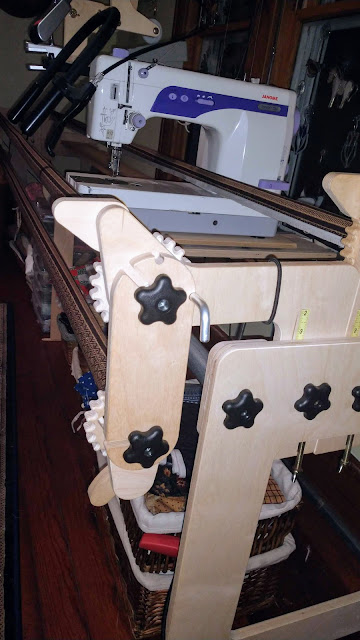 It takes up the whole wall in my sewing room... but I don't mind!  I sold off my old Handi Quilter frame to another gal... and we even delivered it for her.   I am just tickled about having this bigger frame and sturdy sewing machine to keep up with the high speed quilting I do. I was worried about burning out the motor on my domestic Janome 8077 with the long runs of free motion stitching.  This new-to-me Janome can handle it at 1,600 stitches per minute. 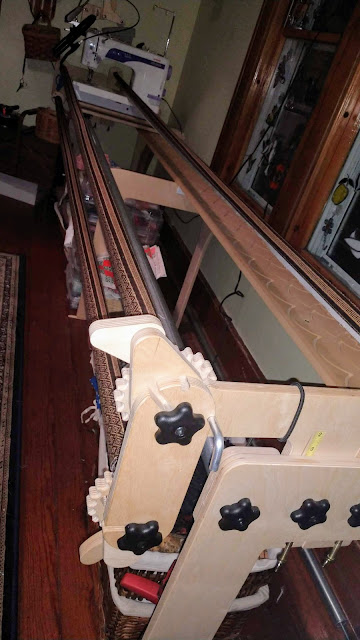 I have worked three quilts on it already,
and will post those in a future blog....
because there is a long story that goes with those quilts.

When we got this Hinterberg quilting frame, it has something called "Groovy Boards" that run along the back side of the frame.  A stylus device is attached to the sewing machine, and the tip of it runs along the grooves in the boards. It then replicates the pattern from the grooves on the boards onto the stitching on the quilt.  Neat!  I have the choice of right scallops, left scallops, tulips or greek motifs. 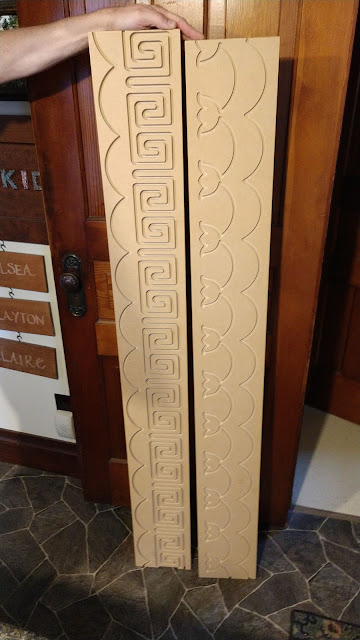 But -----The boards that came with the frame were warped from standing up on end in a basement for a couple years.  Oh my!  The previous owner never used them, nor had any interest in learning to use them.  But I did!  We knew that when we bought the frame. The crazy thing is that these groovy boards are NINETY NINE DOLLARS  a set!   ACK!

Look how warped they are,
standing face to face. 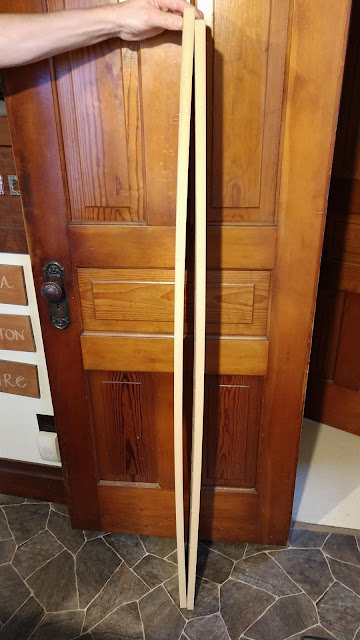 Here is where my Groovy Husband comes into play.  He knew he could straighten up my Groovy Boards by using some angle iron.  Being thrifty and resourceful, he went into the magical stash of attic stuff and took down two old iron bed frame rails!  (left by the previous owners).   He measured and they were long enough to do the job. 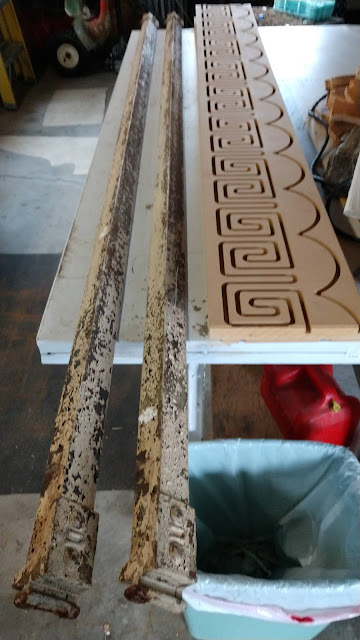 He used his grinder and took off all of the rust and flaking paint.  Then he gave them three coats of Rustoleum paint to keep them from rusting again.  He used his drill and made holes after carefully measuring the Groovy Boards' patterns.  Using a Fostner bit, he drilled down to make recessed holes into the wood.  Then he attached the rails to the boards with flat headed bolts and locking nuts that wouldn't come loose from vibration.  Smart guy!

Look at that!
No more warp! 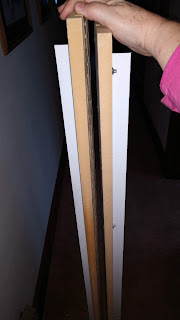 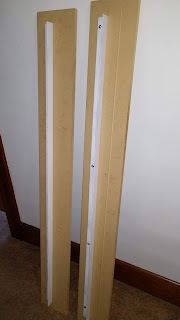 I am such a lucky wife to have such a darling husband.
He tries so hard to fix things to help me along in my fiber pursuits.

Here are the Groovy Boards in place,
on the frame behind the machine carriage.
The little stylus device isn't on yet in this pic. 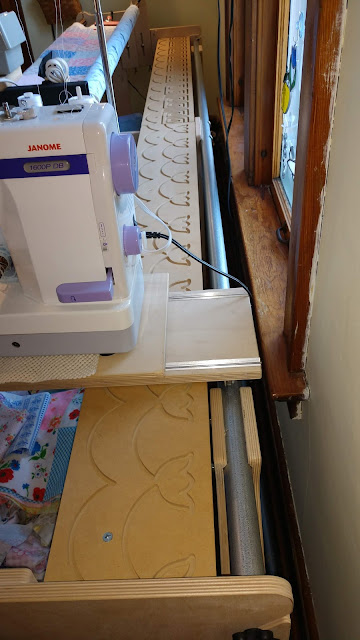 One quick project I had to whip up this week was a set of southwestern potholders.  This is some fabric I picked up the last time we were down in the desert.   These are a "camper-warming" present for someone special. 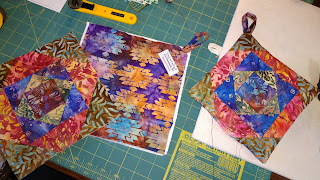 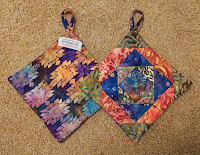 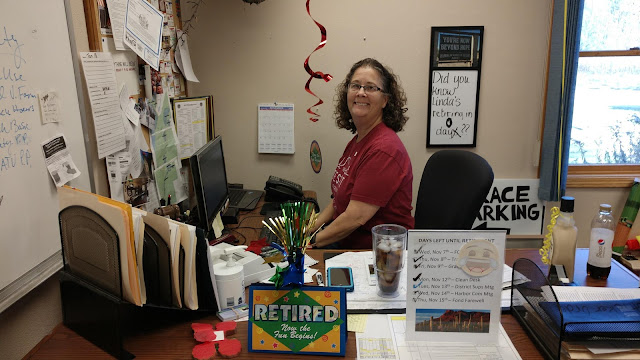 She was the best boss Steve ever had
before he retired last year.

Linda bought her very first RV camping trailer, already set up on a lot in Arizona and waiting for her.  She worked on Thursday right up to the end of the day.  But she had her car loaded up to the max. She is heading out to spend the winter in Arizona!  She didn't have a lot of room, so that is why we gave her a very small sized trailer warming present, and a couple pairs of my handknit wool socks for a retirement gift. 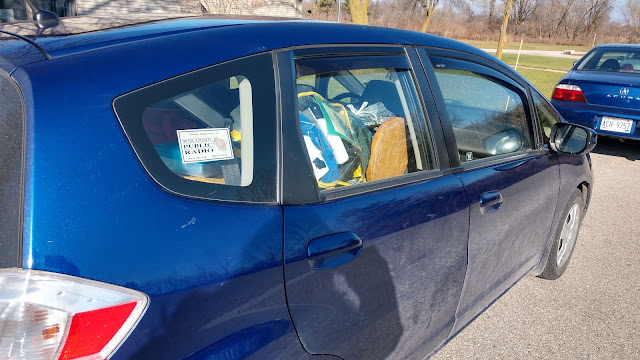 (as of her most recent post tonight,
she made it as far as New Mexico)

Posted by KarenInTheWoods at 10:06 PM 10 comments: