Uggghhhh  today we woke up to rain rain and more rain. After all of our below-freezing weather for the last few weeks, this is really strange. It was over 40 degrees plus we got half an inch of rain.

They say every inch of rain equals 8 inches of snow if the temps were colder. So I guess we just avoided shoveling 4 inches of snow?


Today was the second of my wonderful lunch dates with the grandchildren at their school. Today it was 4th grader Chelsea's turn to have me show up for her special day.

I had gone into the school, and paid my money on to Chelsea's lunch account at the office to cover for an adult meal.  Nobody in the office said a thing to me or asked why was I there?

I looked around, and it was strange, there were no other parents there!!!

But I saw Chelsea come walking out with her lunch tray. I surprised her at her table.

It turns out, that after the notices had been sent out, somewhere along the line the date changed! She said last week at school the teachers had them cross off today and change the date. I didn't know that. I just had a copy of the original notice. Guess what?

The Eat With A Parent WASN'T TODAY!!!

It was rescheduled for tomorrow


Then we went and got a tray for me because the teacher on duty said parents are welcome to come and spend lunch time with their children, and that goes for grandparents as well. 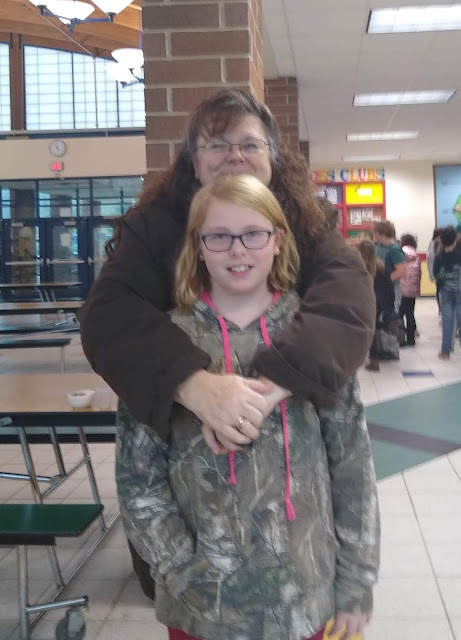 We had a nice little lunch of mashed potatoes, turkey and gravy, green beans, some raw veggies, a roll, and a dish of a wonderful pear upside down torte with whipped cream in a separate little styrofoam dish. (I saved that and took it home for Sicko Boy Steve as a special treat). 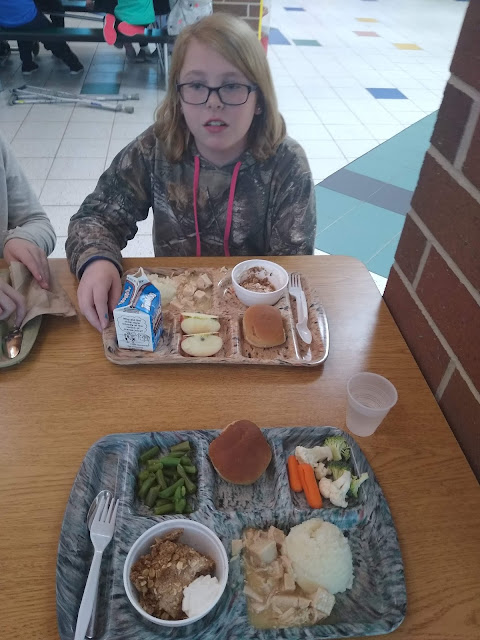 We chatted with some of her friends and she introduced me to a certain little boy who is just a boy, but who happens to be a friend.... You know how that goes in 4th grade, right? 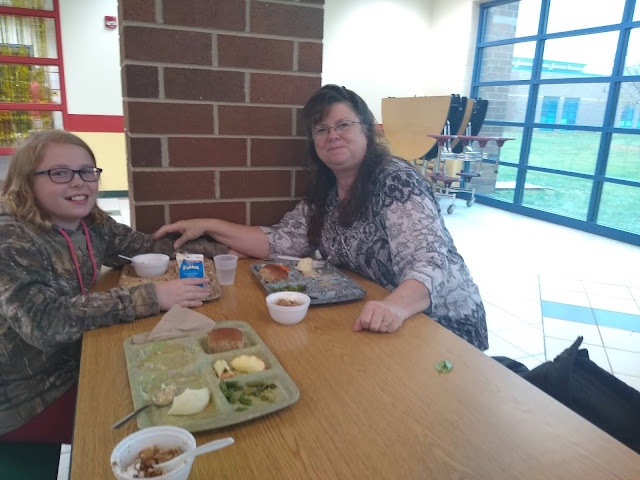 We chatted about her "Crochet Club" that she is in at school. Here are their informational posters on the bulletin board in the main lobby. 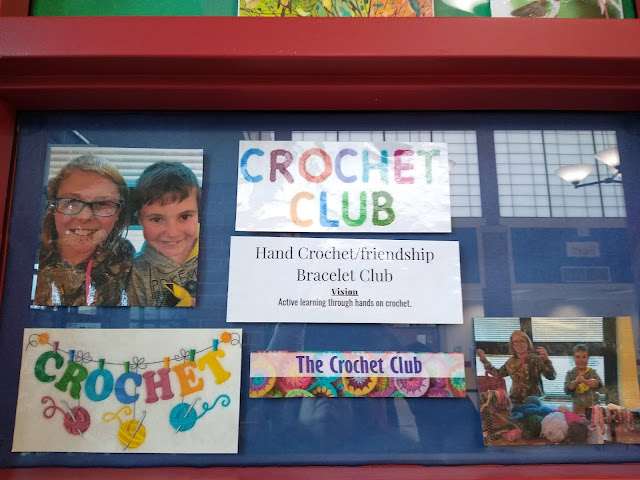 She said they mostly like to finger crochet, but sometimes they crochet hook crochet too. They sell their little bracelets that they make in the school store near the entry way to the school. 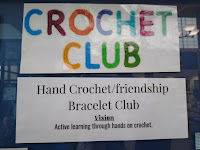 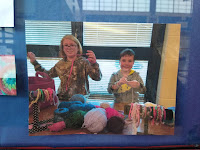 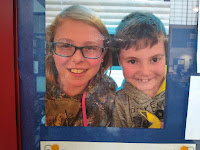 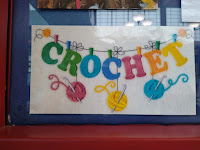 All too soon lunch was done, and Chelsea put our trays away. She got back in line with her friends and headed off back to her classroom.  The certain friend who is a boy who might be a friend was in line right behind her. 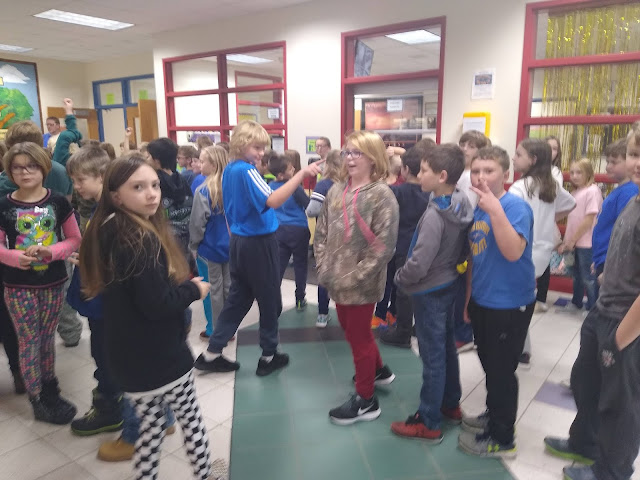 I took my dessert cup and headed home to my sick husband..

When I got home, he said he was actually feeling a little bit better. He got enough energy and took a shower and managed to shave. That means he's doing better! He ate his little dessert, and also some chicken soup for lunch.

He wasn't up to working on any projects, but sitting in a chair and watching tv.  I kept myself busy with my own stuff.  I hemmed up the three rugs that I had just taken off the loom. I used my grandmother's old Singer sewing machine to do the job. 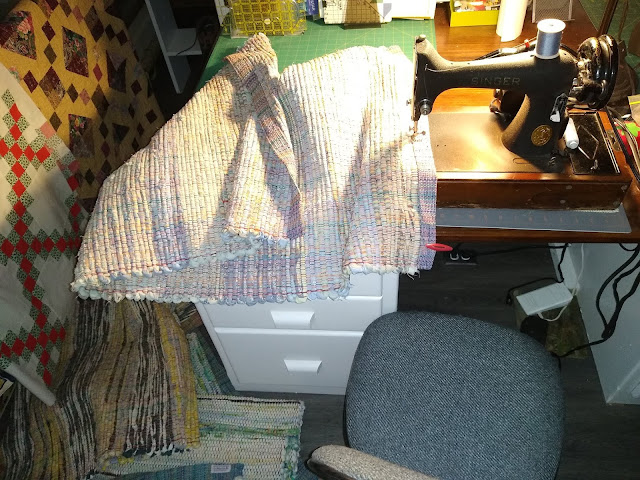 It needs to sew through three heavy layers header folded over to become a flat hem. That very old singer does the job quite valiantly. 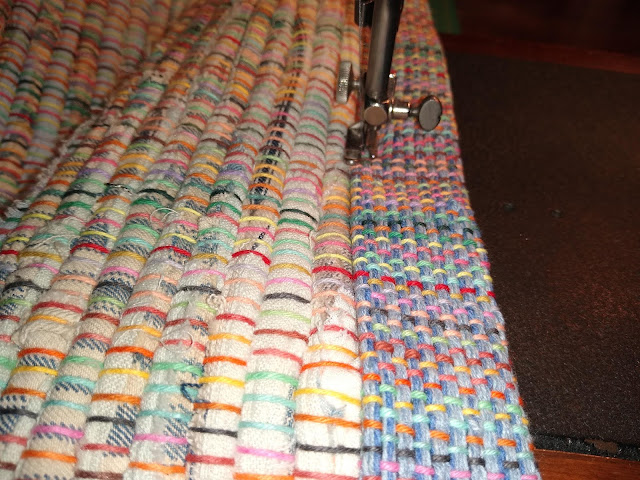 One rug is already spoken for, and the other two will be listed in my Etsy shop for sale. But not until after I take some nice pictures of them on a brighter day.

It was still raining and dreary all afternoon. We both curled up and took a nap. The dogs joined us and things were pretty peaceful here all afternoon.

He said his appetite is back and he could finally start tasting things again. He gobbled down two bowls of a chicken noodle casserole for supper. I think it was filling comfort food but should be pretty mild on his stomach.

Tomorrow we go to our regularly scheduled yearly checkups... and he will talk with the doc and see how he REALLY is doing.

As I am typing up this he is watching Andy Griffith on Me-TV, cozy in his chair, sitting in the She Shed.  The fireplace is going and it's dark and dreary outside.  But inside it is warm and comfy and pleasant. 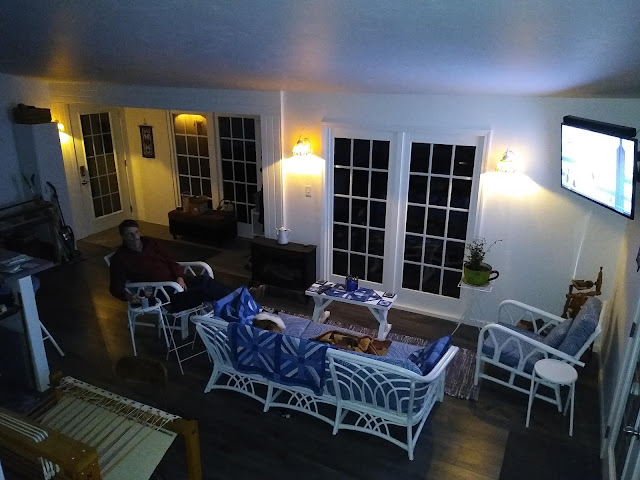 I think that after all the work he did on the She Shed,
he is really enjoying the room as much as I do!

Posted by KarenInTheWoods at 8:03 PM