Back to Real Time - Ceramic Tile and Snowflakes

Guess what? No more catch up blogs of the she shed work!

We are finally back in real time. Now by the end of this blog, we have caught up all of the work that we have been doing on the she shed.

The last project left to finish is the tiling of the entryway floor.  It's a 4x12 space leading into the main area which has the gray plank flooring all finished.  We wanted this entrance in something more waterproof, so we decided on ceramic tile.

A previous trip to the ReStore had netted us this wonderful bargain of some beautiful ceramic tile. The tiles are very compatible with the gray plank flooring we put in. We needed 48 twelve inch tiles to do the foyer area. We were able to buy 5 boxes of 11 tiles ....  which was 55 tiles for $.30 each. The tiles have been patiently waiting in the garage until we were ready to start the entryway floor. 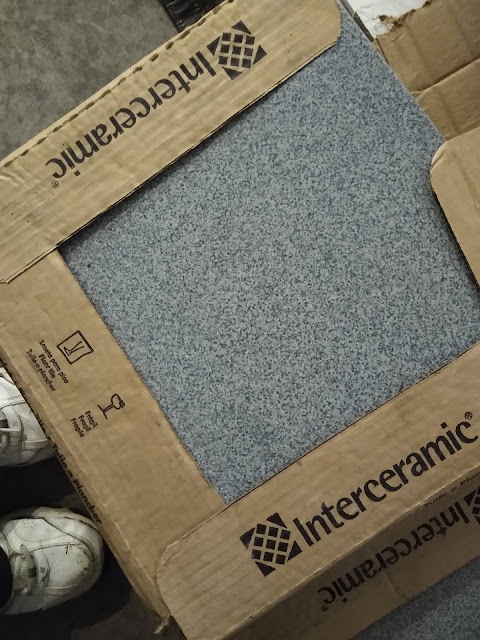 The first step that Steve had to do was
to prep the old garage floor cement. 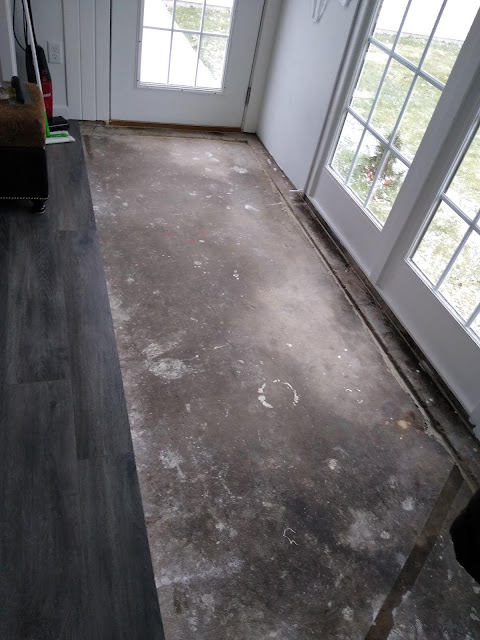 The cement floor is slightly sloped so we need to use a product to level the floor. We bought three 50 lb bags of TEC EZ level premium self-leveling underlayment.

First there is a special primer product that you brush onto the cement area so the floor leveling compound will bond to it. He rolled that onto the old cement with a thick roller.

Then he added a thick piece of subfloor to one portion of the floor on the right side. This is the portion that slopes down hill the most. He was just trying to take up space so we would use less floor leveling compound in that area.  He doused that subfloor good with the primer. That he had to let it dry before he could move on to the next step. 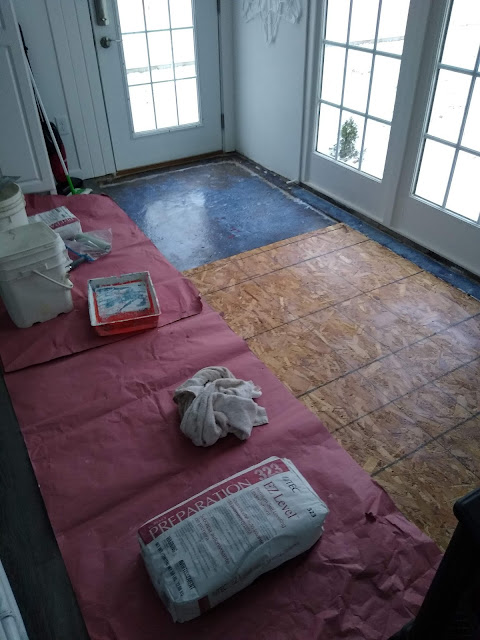 With a special mixing wand on the end of his drill, he was able to mix up this floor leveling compound to a thick gloppy watery mud. Bucket by bucket, he mixed it up and poured it into the recessed area of the entryway floor. 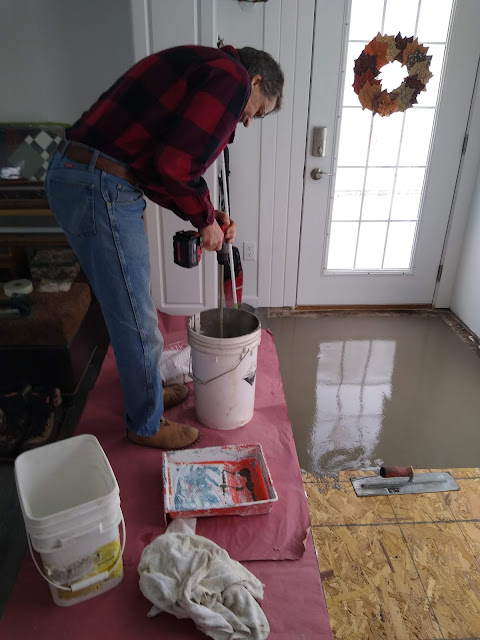 The leveling compound mud seeks its own level. Bucket after bucket, he would pour it on and each time it would ooze out a little more to fill in the next area. 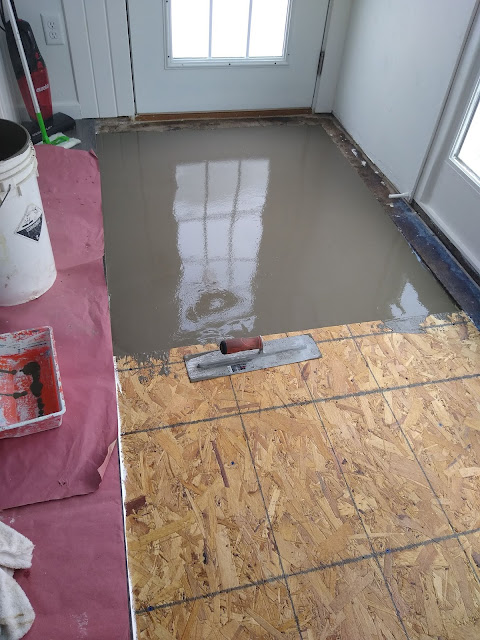 He helped spread a little bit
over the wood to get it even. 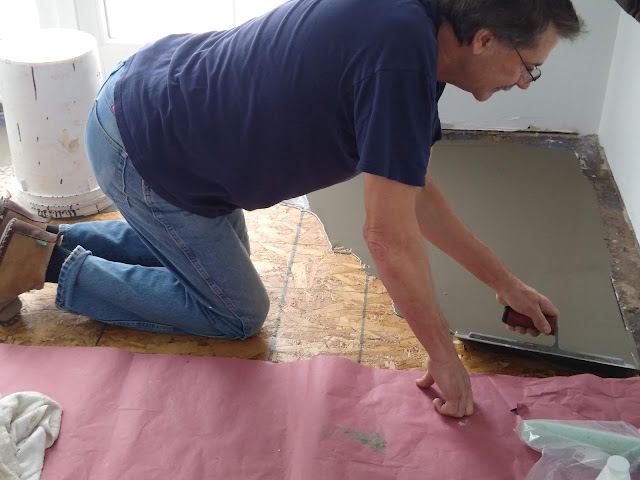 A few more buckets over the top of this and soon it would be level and set to dry overnight. That is the hardest part, having to wait overnight for it to dry. 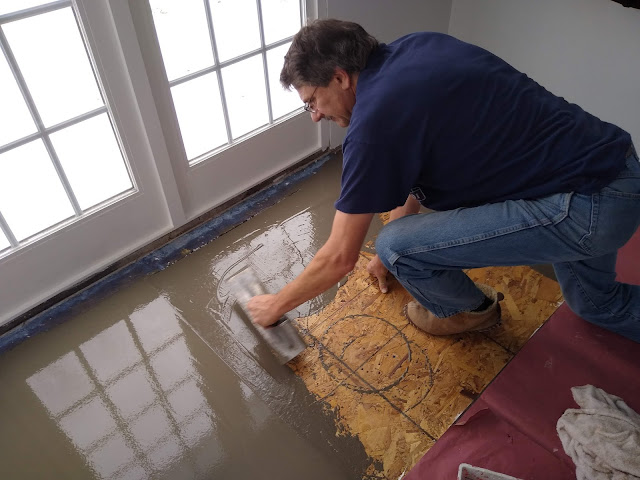 The next morning
everything was dry
and ready for
the next layer of subfloor. 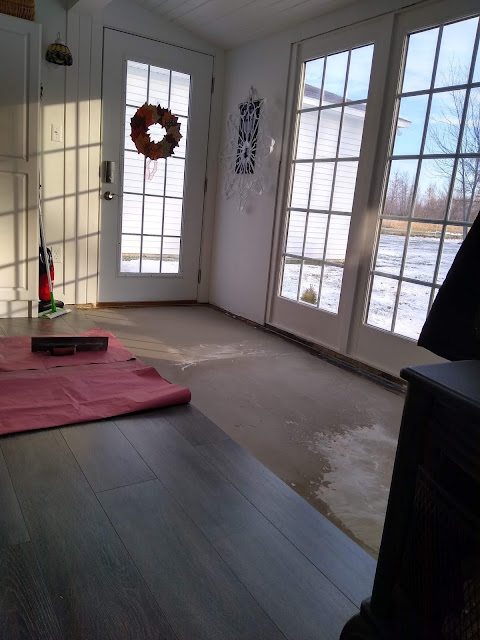 Steve had it all figured out.

The next layer was going to be OSB subfloor board which was 7/16" thick. The subflooring would bring it right up to the level we needed. The remaining depth would be taken up by the thickness of the mortar and ceramic tile. Then it would be even and straight and level across from our gray plank flooring.

He glued and  screwed down the subfloor tightly through the newly leveled area. This was done to avoid any shifting or movement that could dislodge any of the tiles or grout. 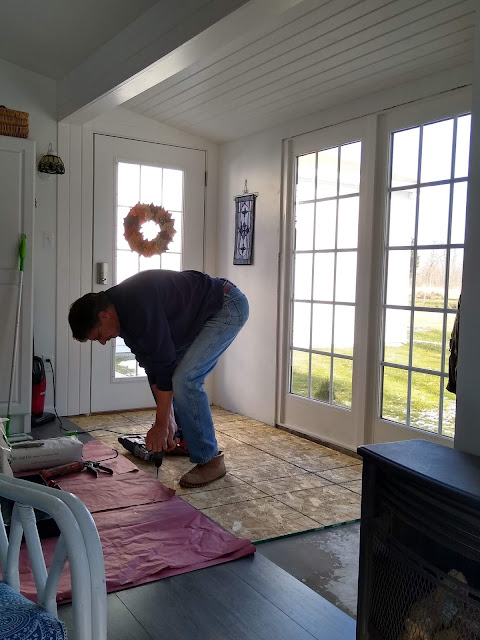 It was finally time to start laying the tiles. Steve mixed up the mortar a small batch at a time. He worked it and worked it by hand with the trowel until it was perfectly smooth. He needed it to be a thick consistency similar to frosting for a cake. 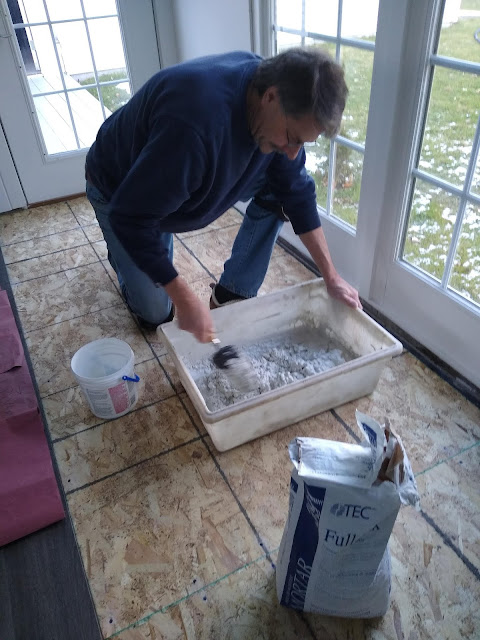 This is kind of a one-man operation from now here on in, because of the narrow work space area. I ran back and forth with rinsing out rags or bringing more water or helping with the cleanup. But this is mainly now "one guy only" in the four foot wide area.

He spread the mortar out enough to do the first eight tiles. Then on the back of each tile he did what is called "back buttering". That means he smears more of the mortar on the back of the tile and then dragging the notched trowel across it to make the little ridges.

In the pic below, he is carefully setting the first tile into place. He has to make sure it is lined up with the gray planks and square to the door. This is the most important piece. It sets the rest of the gridwork of tiles to line up with the plank flooring on one side, the french window on the other, and the threshold straight ahead. 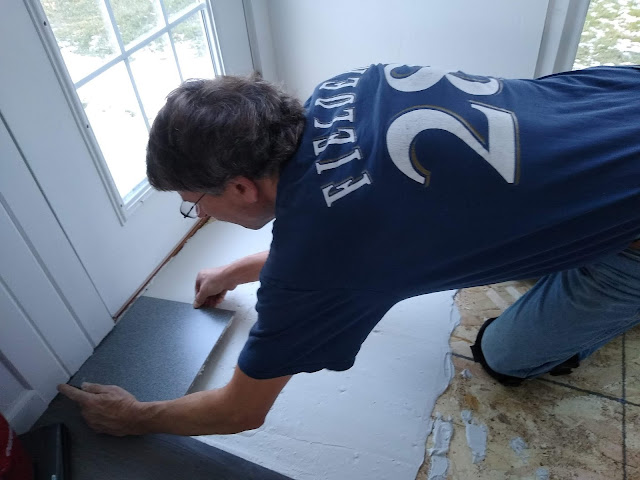 Each additional piece gets back buttered and laid into place. He has little white plastic spacers to make sure the 1/16" gap is evenly spaced between every tile.  Later we will grout it with a darker unsanded grout to go in the gaps and seal the tiles. 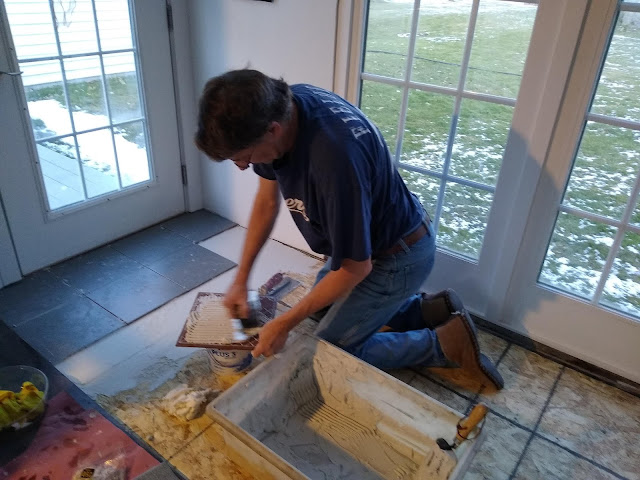 Working on his knees like this is pretty tough on Steve. Over the years he has had torn the meniscus in both of his knees and has had each one surgically scoped to clean up the damage. He was using some contractor quality kneeling pads. He also has a double layer of foam gardening cushions to use if he wants. But his knees still hurt doing this much moving around on them.

He worked a section at a time and then quit for the day. Here are the first 12 tiles, neat as a pin, and once they dry, he will go on to the next section. 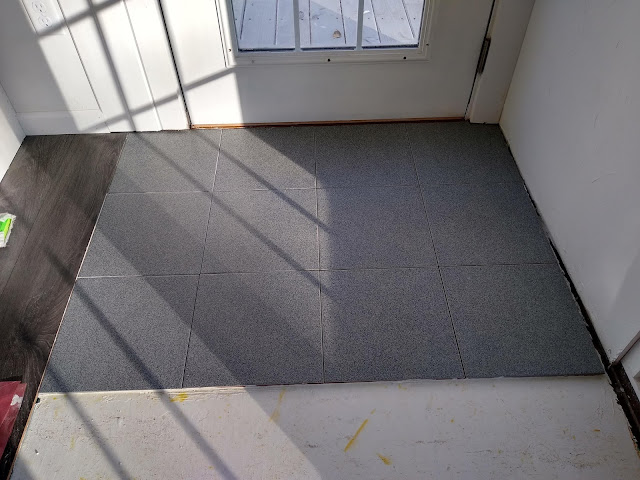 If you have been reading this blog at all for any length of time, you would know that he just couldn't sit and look at those tiles drying and not get up and do another section!!  I thought he was going to take a break and wait a day. Nope, not him. 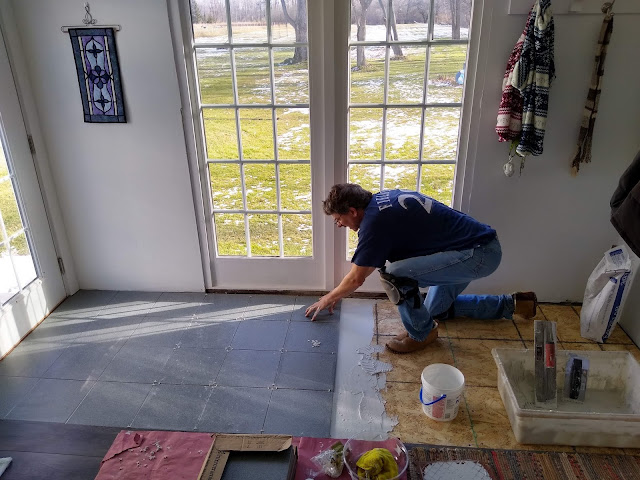 This time he finally decided to take a break and let that much dry overnight. His knees were killing him!!!  And believe it or not, he went a WHOLE DAY without doing any more tiles!  He was suffering from some nasal congestion and feeling punky and under the weather. I doused him with chicken soup, made him take a steamy shower, take a long nap, and then go to bed early.

Now we are done catching up the blog.
We are to TODAY!!!!

Today, even though he was still feeling really crappy with some sinus stuff going on, he decided to mix up another batch of mortar and work some more tiles. He got this far, and he is going to take a break and said he will rest for the remainder of the day. We will be needing to go rent a tile cutter for the last four tiles anyhow. 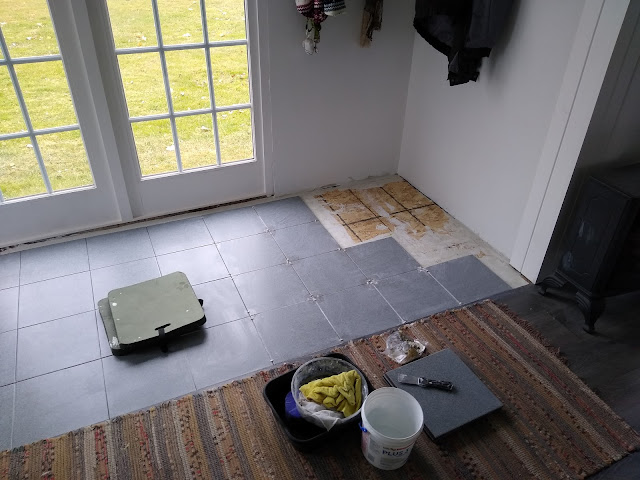 Surprisingly, took a break and rested for the afternoon. I was leaving to go to my Homemakers meeting so it was good for him to rest. Although, I was almost worried that when I got home he would have finished up the last few tiles... He didn't.

He is learning that now he is retired, some things can wait till tomorrow.

Now on to something I was working on
while he was busy with the tiles.


Here is a project that I worked on with some of the grandkids last week. I saw this on Facebook and somebody posted the link to YouTube.  I was intrigued and wanted to try to make one.

I trotted off to the Dollartree store and bought some packs of hangers. You need 16 hangers, but they come 7 to a pack. So you need three packs.  I already had the wire ties.

That is all you need for this project.

Well, not quite. You need a couple grandkids. Because they were really helpful. So I guess three grandkids were needed to complete this project... 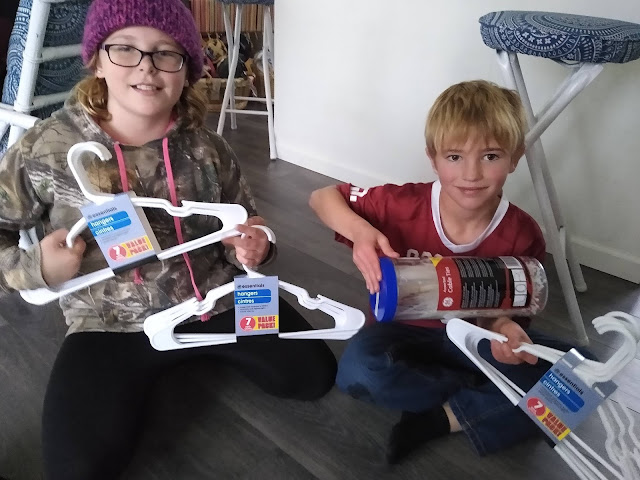 The littlest one, Claire, who is 3, went right to work. After watching the YouTube, she totally understood the concept and was very eager to put this snowflake together! 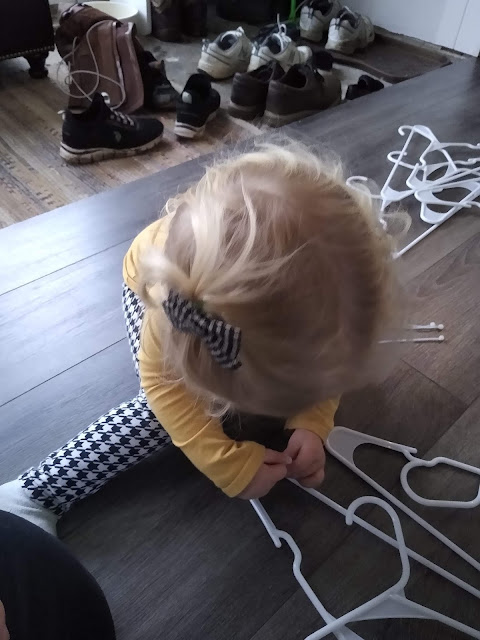 The two older kids, Chelsea and Clayton, understood the concept of the wire ties, figuring which end you needed to push through which side of the little square box to make it "zip" and not slip free.

As the lady suggested on the YouTube video, we left the star as loose as possible while we were assembling it. That's a good hint, do not tighten the wire ties up snug until you are sure you have everything assembled correctly. 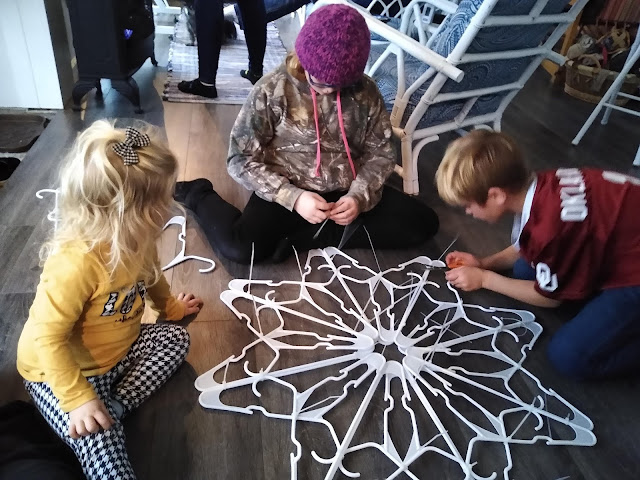 Three little munchkins and one big snowflake. Quite the accomplishment. It probably took them 20 minutes to half an hour to make it. 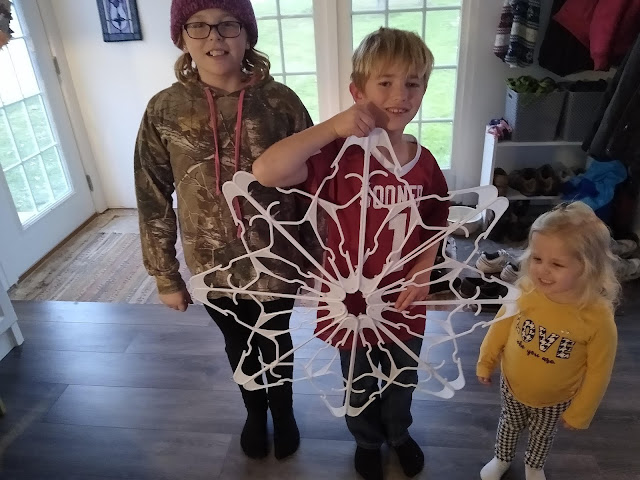 The lady on the YouTube video said you can spray paint them various colors. You can also dab them with thick modge podge and sprinkle large flake glitter on them too. She also suggested putting a little store-bought flat snowflake ornament in the center by using a glue gun.

I think I like them white. I am not sure. Maybe I will do them with red glitter later?

For now, I hung the first one  out on the front porch.  I liked it so much I went back and bought some more hangers to make two more. 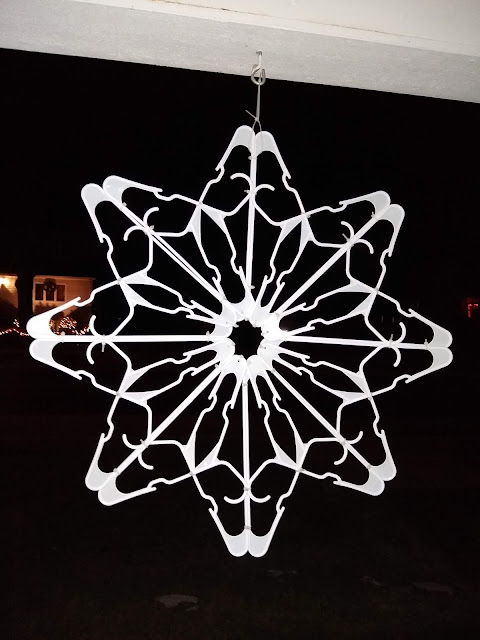 The only problem with the Dollartree hangers is that there's excess plastic at the far ends of the hangers. Through trial and error, I found that if we drilled a hole through the plastic end of the hanger, we could thread extra wire ties back and forth through them around the center of the snowflake. It held it more sturdy and firm. I think other styles or brands of hangers wouldn't have this problem because they don't have that excess solid plastic area. 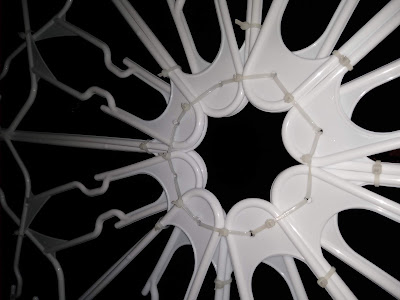 My friend Linda Baldwin had also made some out of children's clothes hangers that makes a smaller snowflake. These full size hanger snowflakes are pretty big in diameter. These came out to be three feet across from point to point. I have three hanging on the front porch now, maybe I will glitter them up, maybe make some more? 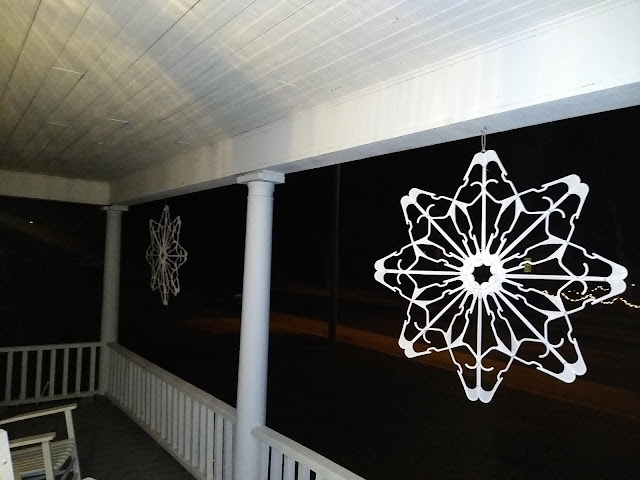 Tomorrow I will talk a little bit more about
Christmas decorating outside of the house...

Posted by KarenInTheWoods at 7:53 PM