Yummmm we started out the day with fresh baked apple turnovers. The local grocery store has a "you take it and bake it" department in their freezers. 15 minutes in the oven and we had fresh flaky pastry with our coffee this morning. The sun was coming up, but we didn't see it due to the clouds.... 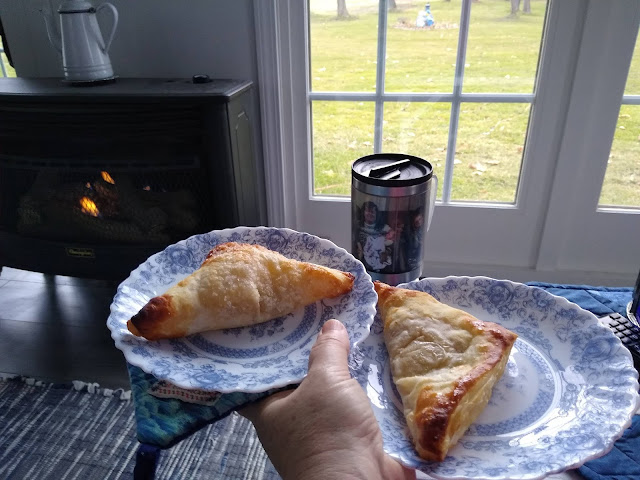 Steve is still feeling under the weather. I have a feeling he is now suffering from a sinus infection. We have an appointment on Friday with the doctor. Hope he makes it till then???


While he was resting this morning, I had a special lunch date with a young man! Our youngest grandson Clayton, in second grade, had an event at their school today called "Lunch with a Parent". His mom was not able to make it, so I filled in.

While I was waiting in the foyer of the school for the classes to be released, an ambulance pulled up and in walked two paramedics! No worries, no emergency. They were there to have lunch with one of the students. How cute was that? 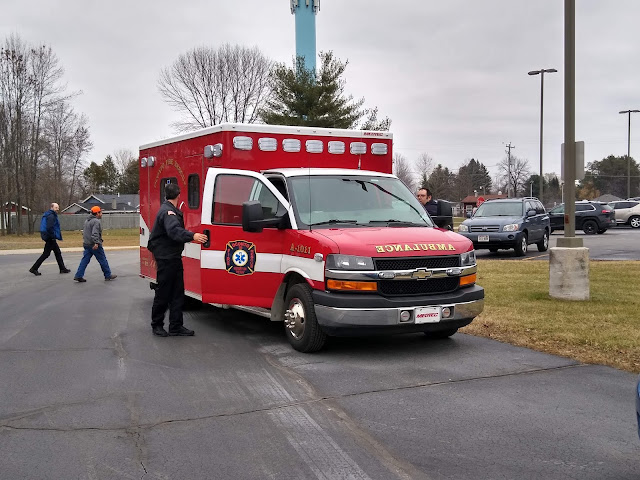 The second grade classes were released to come to the lunch room. As they filed in I kept my eye out for Clayton. He didn't know I was coming so it was a huge surprise.

He was bouncing on past without even expecting to have a parent waiting in the line in the foyer. I reached out and snatched his shirt collar and really gave him a start.


"How did you know I was here, Grandma?" 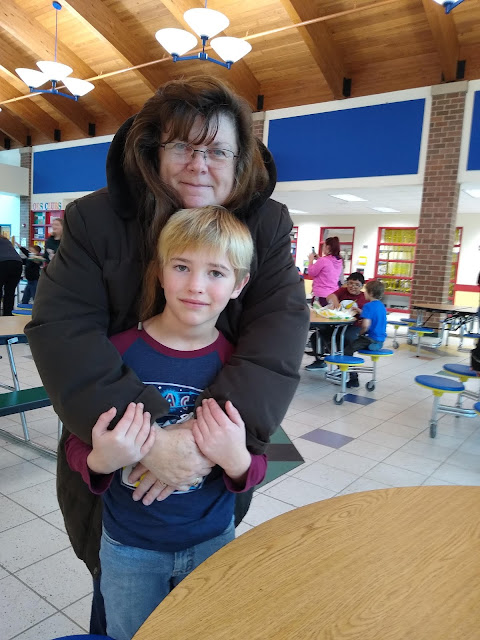 He showed me how to get our lunch trays and our eating utensils, and he chose milk while I opted for a glass of water. He was so proud to be the one to teach me, and show me the routine of his lunch room process.

After making our choices at the fresh fruit and salad bar, we entered into the kitchen area to be surprised by the attire of their chef in the school cafeteria!  I believe that is a Rat-a-touelle hat? 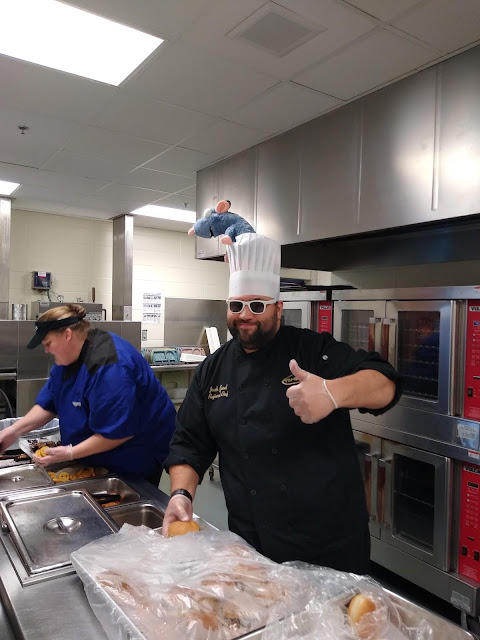 I had the pleasure of eating a most delicious lunch of some fresh veggies, then some kind of a soybean burger patty thing and stack of semi warm round smile face french fries along with a very sweet gooey chocolate brownie. 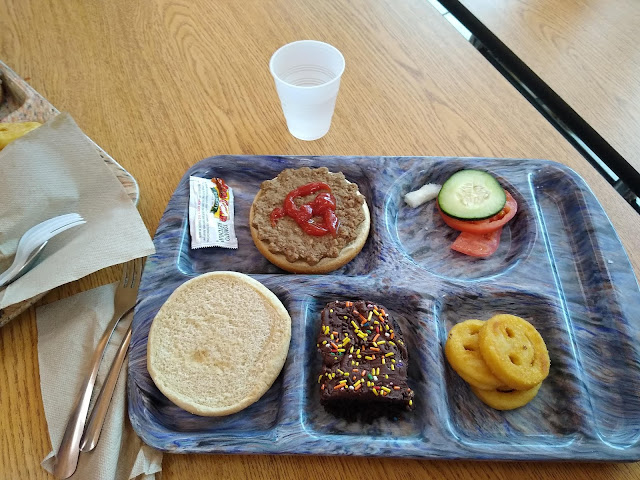 We sat and chatted with two other little friends at the table. Clayton told them all about how he does the spinning wheel and does rugs on the weaving loom at my house. He had me show them pictures and the video on my phone. He told them that every time he comes to my house he does some kind of "yarn thing". Awwww 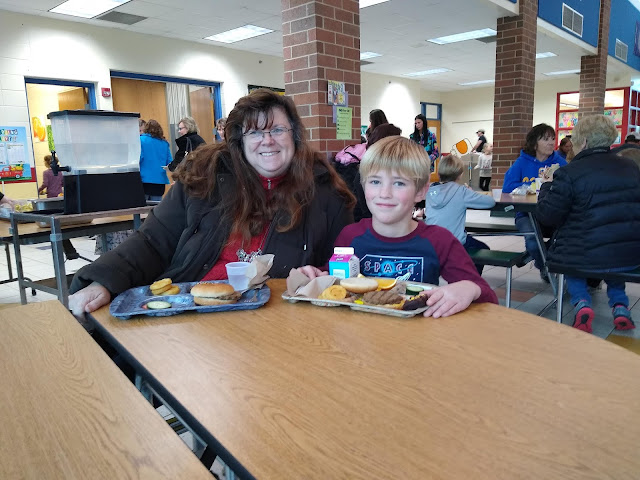 With a hug and wave and smile, he was back in line and headed back to his classroom. My... what a handsome lad to have a lunch date with! 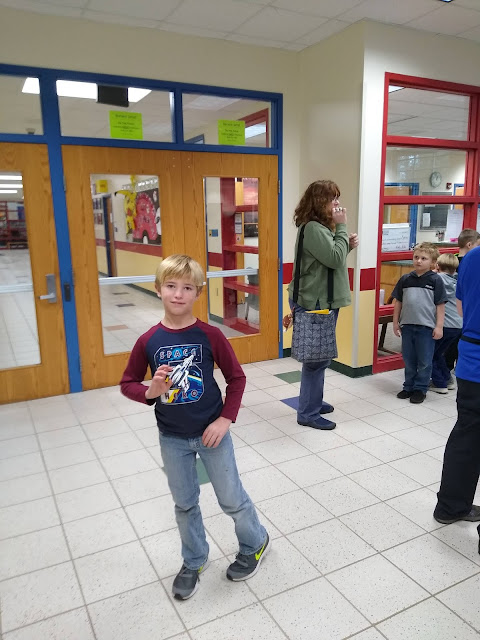 Tomorrow it's the fourth graders turn to have a guest, so I will be there for granddaughter Chelsea too.  I will have to find out if the middle school is doing the same event and see if I can show up for the oldest grandson Jameson.

After I got home from my marvelous lunch date, I found Steve finally resting and taking a nice nap. That only lasted so long...  He was back up and at em and looking for something to do.

It's hard to keep him down and make him rest. Next project he tackled was changing out the wall unit for the fan speed control for our ceiling fan in the she shed. See? 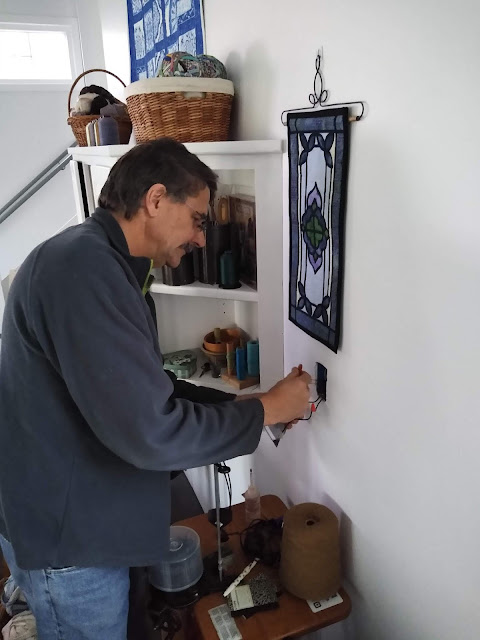 I love the ceiling fan that we put in the shed, but the control has set speeds of notched increments of 1 2 3 4 and 5. Speed on notch 1 is so fast, and speed 5 is like a standing underneath a helicopter!  We wanted a rheostat type controller that we could go lower or higher without any set increments.

So we bought a different controller for on the wall that has a slide control and we will see if that helps slow things down a little bit. 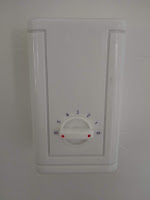 He got it all hooked up, turned the power back on, and let me try it out. YAY! I am really glad the fan in now fully operational and we can control the spin a lot better. No more helicopter winds!

Speaking of the ceiling fan, when we bought this particular model it was made to be suspended from a flat ceiling. There was not a provision in the bell housing for tilted or sloped for a slanted ceiling. After we mounted it, there was an angled gap above the bellhousing that hides the wires. Steve created a cute little wooden wedge to fill in the space. 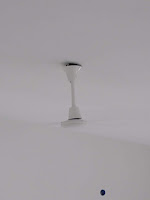 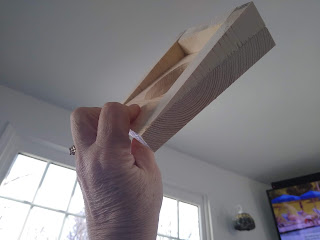 I painted it white and he was able to put that up there to make it have a more custom installation. He did that a couple weeks ago but I didn't post about it then. 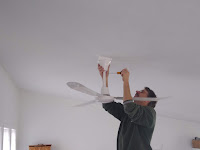 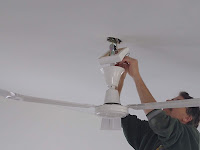 I do like the plain white fan,
and it is up and out of the way
high on the ceiling. 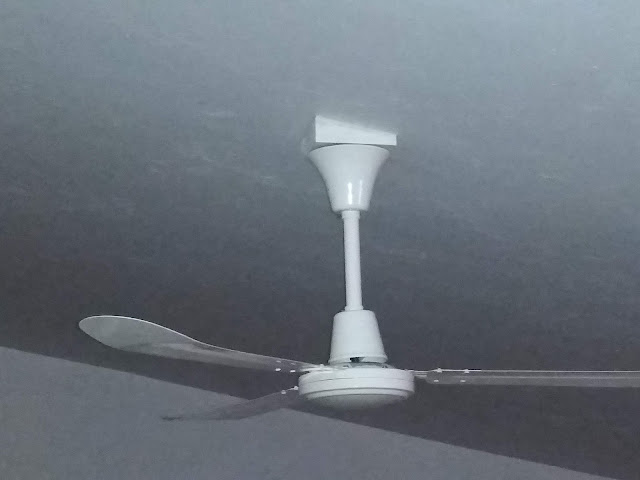 I found another small project to let him help with... we added another row of garland and lights along the top section of the front porch.  By using his "tall-ness" he was able to nail up the electrical staples to hold the lights. Otherwise I would have had to drag out a stepladder and go up and down and up and down to do the job. 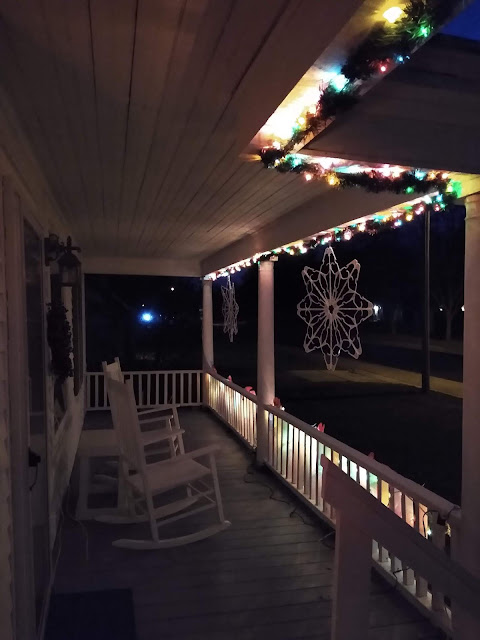 I hoped these lights will shine down onto my gem studded snowflakes and illuminate the front porch better for Christmas.  Now that it's dark out this evening, it looks like that is going to do the trick. 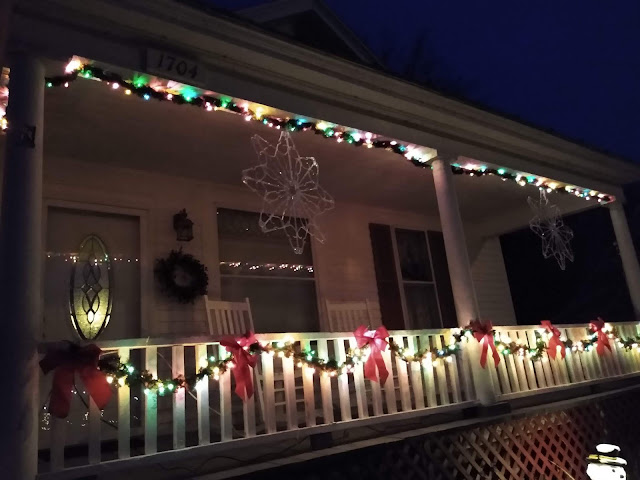 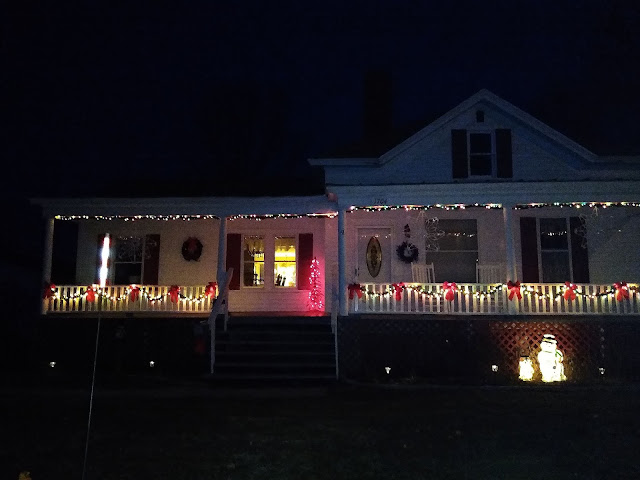 Once he was done with that, it pooped him right out. Back to his chair now till suppertime. He has no appetite, but said he will eat whatever I make.

He said it don't matter what it tastes like, because he can't taste anything!!!   Such a testament to my cooking?

Posted by KarenInTheWoods at 6:29 PM