Our old man dog Duke (a.k.a. Dookie Palooki) gave us a scare yesterday.

Seems he had a seizure or a stroke.... he was all stiff.  I have had this happen with two other shelties in the past, so I knew what was happening.  I held him and soothed him, as he was scared and kinda frantic. Later he has a crooked looking face, with one eye closed more and one side of mouth puckered up and limping moreso on one side.   He was pretty exhausted and laid down on his side, breathing heavily.

Duke is 10 years old, and has a huge tumor on his chest that has grown firm and spread under his armpit.  Had him at the vet 2 weeks ago, and we decided things have spread into his ribcage and probably his heart.  He probably has other tumors now, pressing in the brain or on the heart. We will keep him comfortable, and when the time comes, we will let him go with grace and love.  There isn't much we can do even with a surgery. Shetland sheepdogs life expectancy is only about 12-13 years old.  Seizures are very common in elderly shelties.

We think he had a seizure recently prior to this one. Steve noticed on Wednesday while I was gone to my quilting class, that the sound of Duke's bark changed.   We had noticed the same change in bark when Duchess was nearing the end last summer too.

Little Finnegan was all worried about his big buddy Duke. He laid close and kept sniffing his face and licking the corner of his mouth, just like a pup does to a mommy dog. 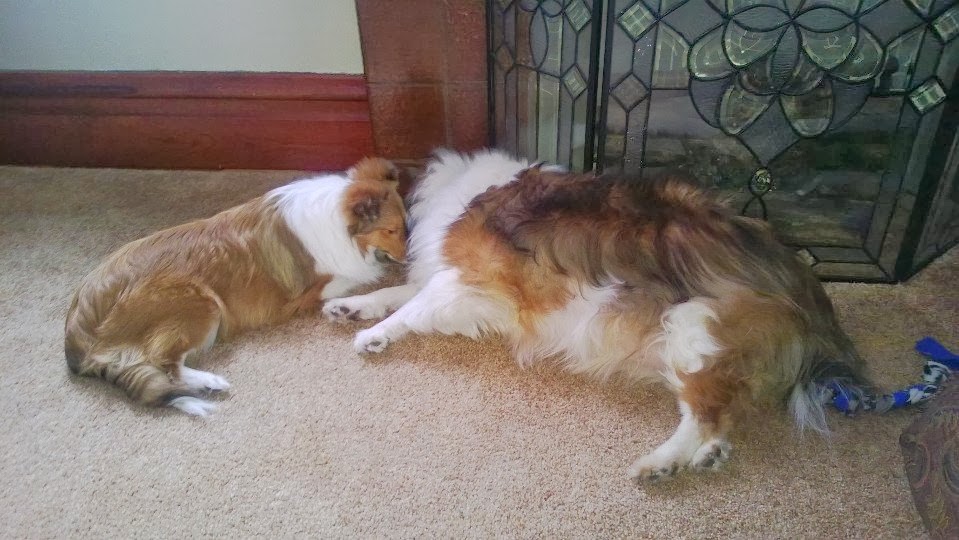 I watched him closely and he was resting for a few hours.  Soon he was up and drinking water and walking around.  A few bites of food, and a gobble of a hot dog slice had him back to his pretty normal self!   He even tried to fetch a ball one or two times, and then went and laid back down.

He slept well, and didn't rustle around too much.  This morning he went out and did his business as usual!  Looking pretty chipper and happy, and the face seems to have relaxed back to his normal shape.  We are so relieved, but know to watch for more in the future.

When my old sheltie Max had seizures, he only lasted a month.  He was a confused little boy who was sooo lost, and seemed to forget who we were, where his things were, where to find his bowl, which door to go out etc.   It was like the seizures erased all his memories.

When our old sheltie Bani Bon Bon had them, she made it a year.  Once in a while after one, she would wander off and get confused, but she usually bounced back.  Till the end when one left her paralzyed.  Then we had to do what all good owners do when the quality of life is over.  Sigh.

But for now this old guy is rallying around and having his good time with us.... and we love him.  So glad Duke has been here to show new Finnegan "the ropes" and how to love us and live with us and enjoy the lives we offer to our pets.

Hopefully he will be fine to go travelling in HIS motorhome in a few weeks!   After all, the motorhome belongs to the dogs.  We humans are only here to drive them to new places to sniff! 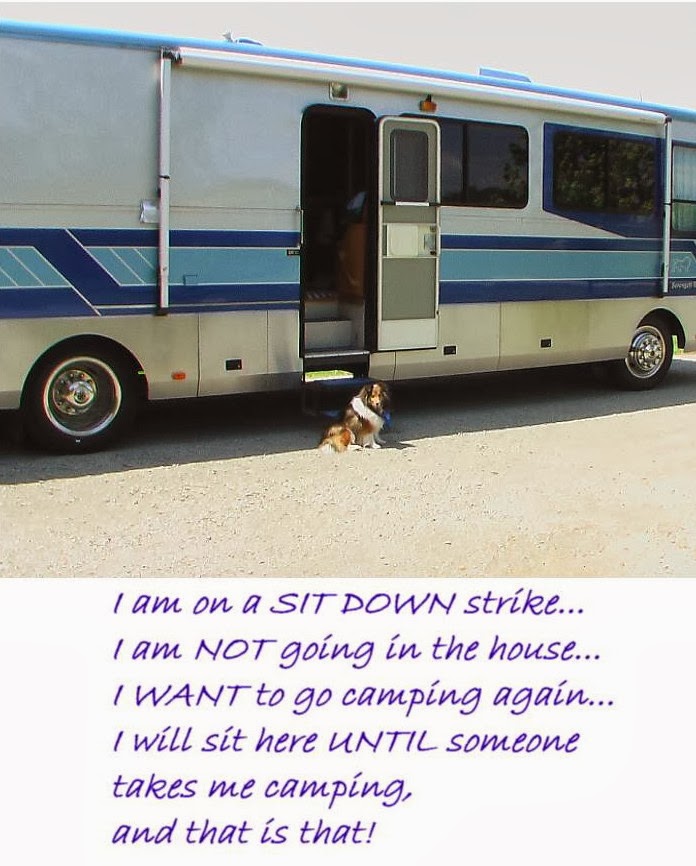 We have started training little Finnegan to go out in other parts of the yard on a leash to do his business.  He has only been in his little penned in yard area for doing that stuff, and now he has to learn to do it other places when we go on our upcoming vacation.

I remember the first time we took Duke out west, he didn't like peeing on anything other than grass.  It got kinda hard for him to not go pee, he was holding it all the time until we found grass!   The further west we got, the less grass.  Soon he had to learn to go on bare desert gravel, but he didn't like it!

White Sand Dunes National Monument was very very confusing to Duke on that vacation. He wouldn't pee on the white sand, and thought it was SNOW!!! He tried to eat it!  Goofy Mutt! 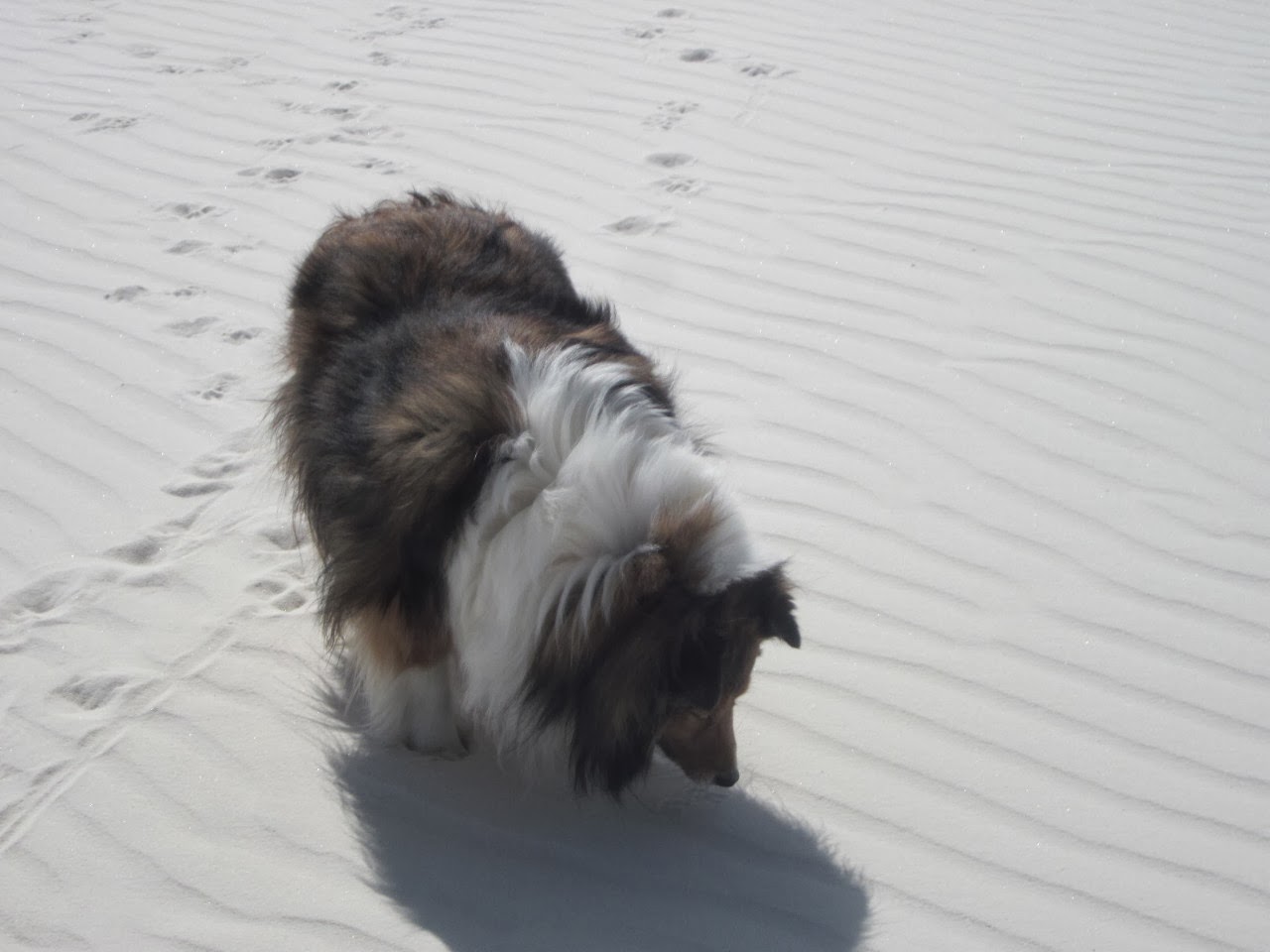 Once we hit GRASS again on our way home from a desert vacation  --- Duke rejoiced when we found him some grass in Oklahoma!  Getting back home to grass was HEAVEN to him again....  But he hates going home and getting out of the motorhome.  He holds a little temper tantrum each time we get home, because he wants to keep on going going going! 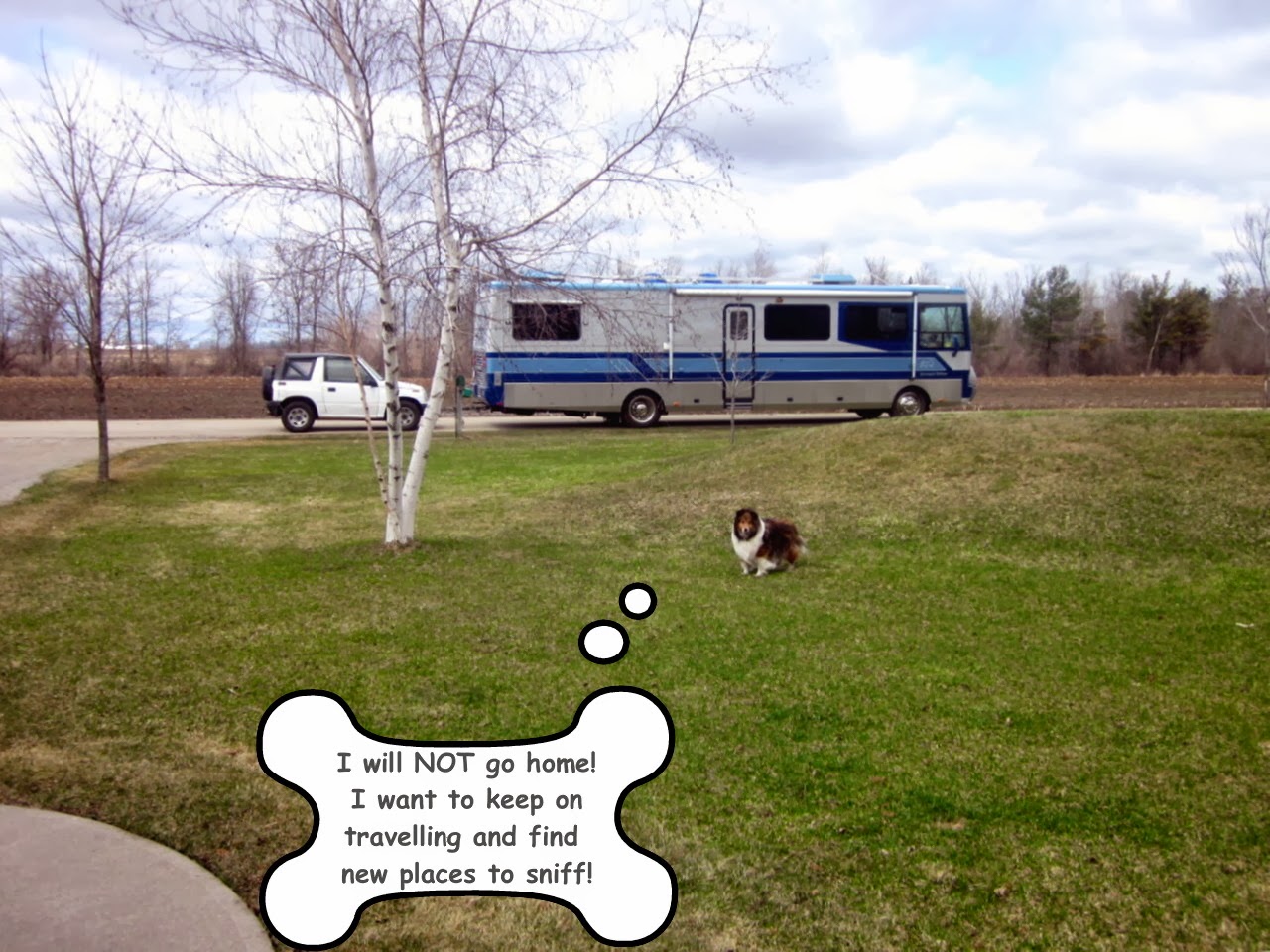 Let's hope we have another fun trip with him, our Little Motorhome Doggie Duke....

For now, he is resting well and comfortable.  He is relaxing in the colored rainbows from our windows, looking at me and wondering why I am crying when I am typing this.  Dang. 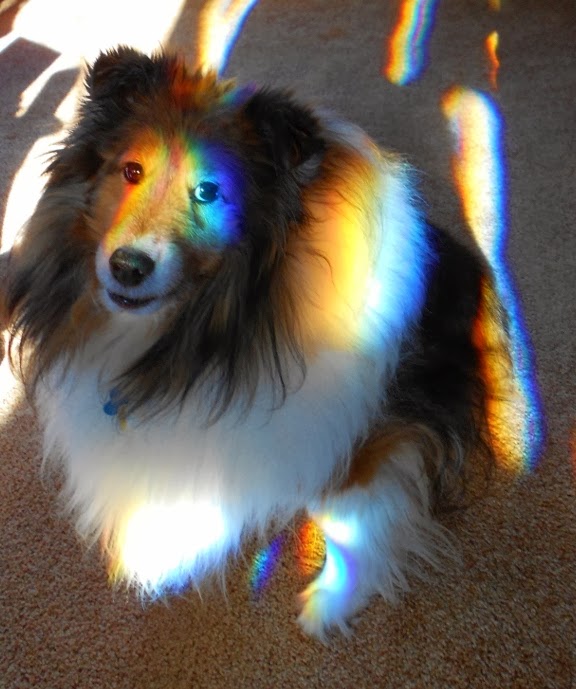 Posted by KarenInTheWoods at 12:58 PM