This blog post is selected to be featured on
The Friends of Wisconsin State Parks blog website:
http://friendswiparks.blogspot.com/

Steveio had to work at the park on the weekend (he is normally M-F 40 hr work week)  but it was well worth it!   The park has a great group of "Friends of High Cliff" organization that does a ton of work... all volunteer efforts to put on events and also take care of a lot of the improvements and needs in the park.  Their link:  http://friendsofhighcliff.org/

Steve started out the day attending their meeting and talking about some of the equipment needs in the park and what the long term goals are in the maintenance of the park.  With all the drastic cuts made by the governor again, things will be very tight on the budget and things will start to fall behind and get uncared for.  With organizations like The Friends of High Cliff, at least some things can be kept up to their original beauty, and improvements be made where necessary.

The Friends group was busy with folks setting up for the annual Candlelight Ski and Hike for Saturday evening. People were grooming trails, setting up fundraising displays and a food booth for later in the pavilion for the tired, hungry and thirsty patrons.  Hundreds of people were expected to attend.  The weather wasn't the warmest (15 degrees) but in spite of the recent deep freezes, this weekend was almost tropical to our bodies and minds!  LOL I think people were getting cabin fever, so this warm up was enough to get them out of the house....  at least it was above zero!

Steve and Ranger Jay had to put out over 100 kerosene filled lights on the trails and paths before dark, and light them as the darkness fell.  It took about an hour and a half just to light them all!

They burn pretty hot, and melt the snow around the can in interesting shapes 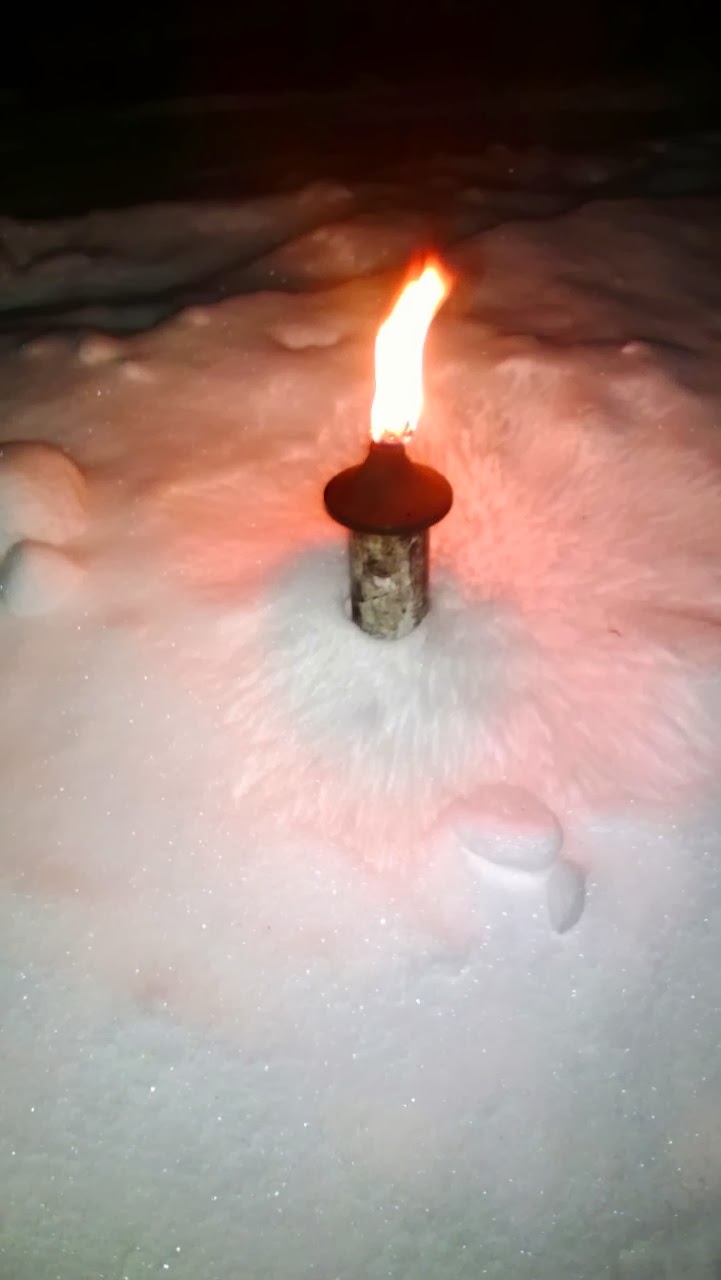 and THIS is what the trails look like, criss crossing all over the park
for cross country skiers and snow shoe hikers. 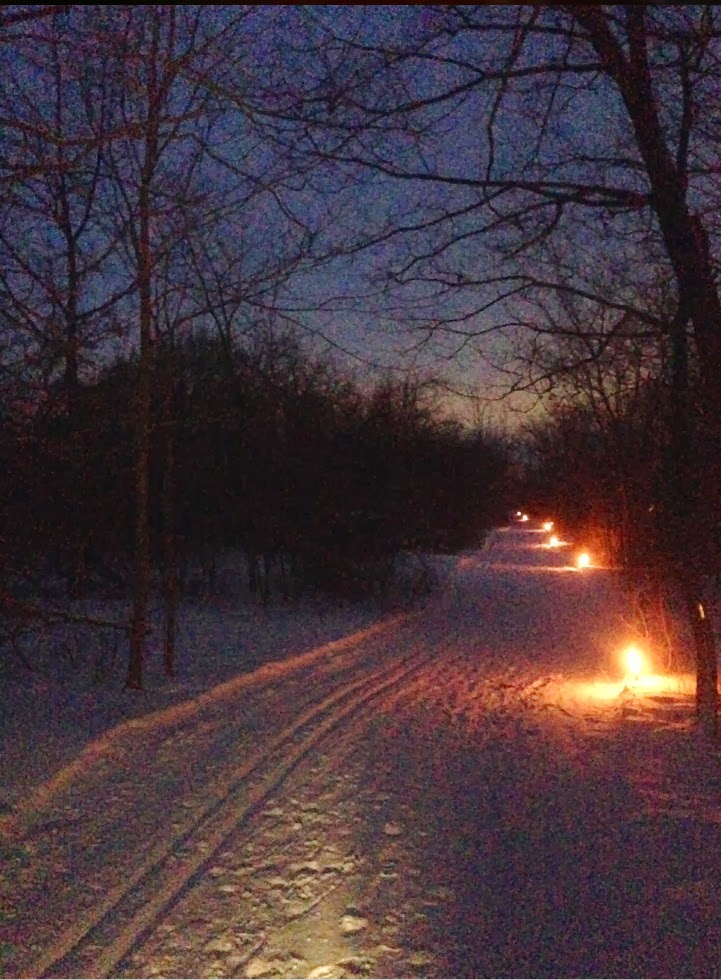 Steve was able to come home for supper, but we went back to the park for the evening (Steve was not on the clock)  to enjoy the time in the pavilion.  Steve had gotten the fire going earlier in the day to warm up the building.   The camera was having a hard time focusing with a flash on the dimmed areas because it was seeing the smoke.  It wasn't as smokey as the pics make it look..... 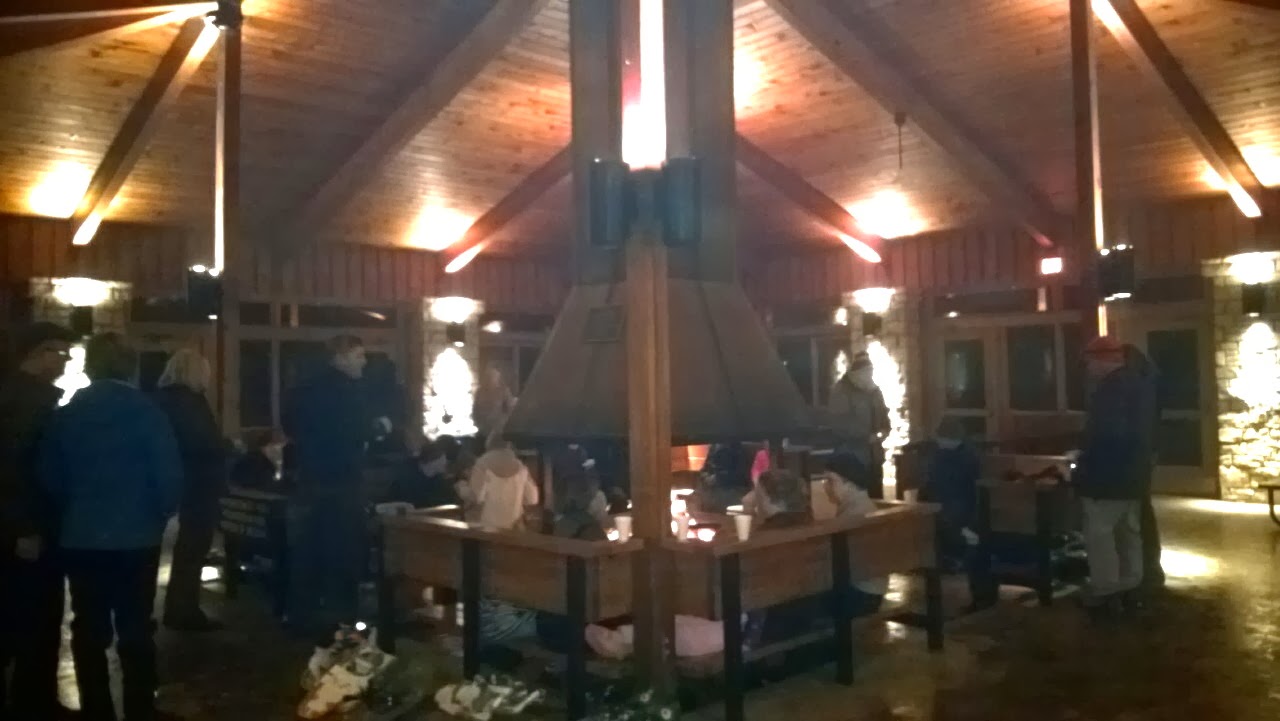 As the fire burns, the copper or bronze metal chimney that soars way up to the roof,
throws off enough heat to warm the entire room 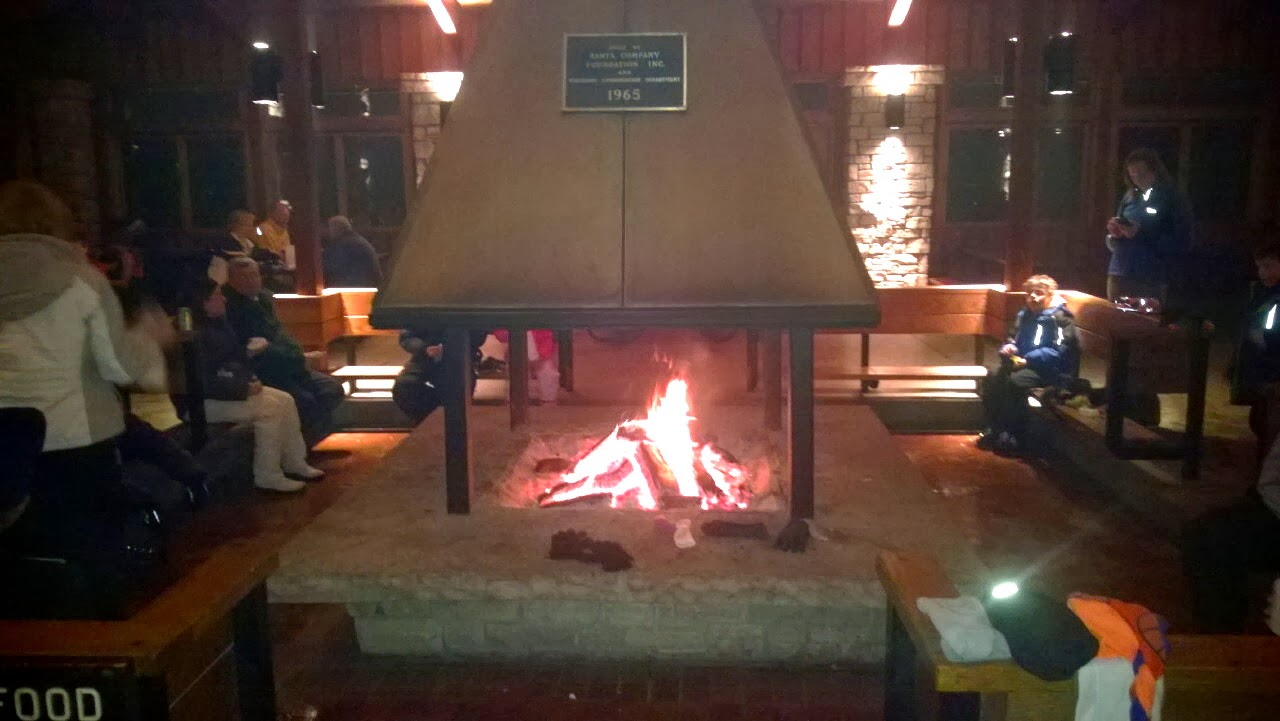 Here is Steve (his title is a Facilities Maintenance Specialist Advanced)
In the summer he oversees an entire crew
and helps coordinate all the volunteer efforts maintaining the park.
But during the winter months he is the only one
to do the maintenance and cleaning and most of the plowing.

Standing along with Park Naturalist Cindy Mueller and Park Mamager Linda Guelig
who is also the preforming the duties of the vacant Park Superintendent position. 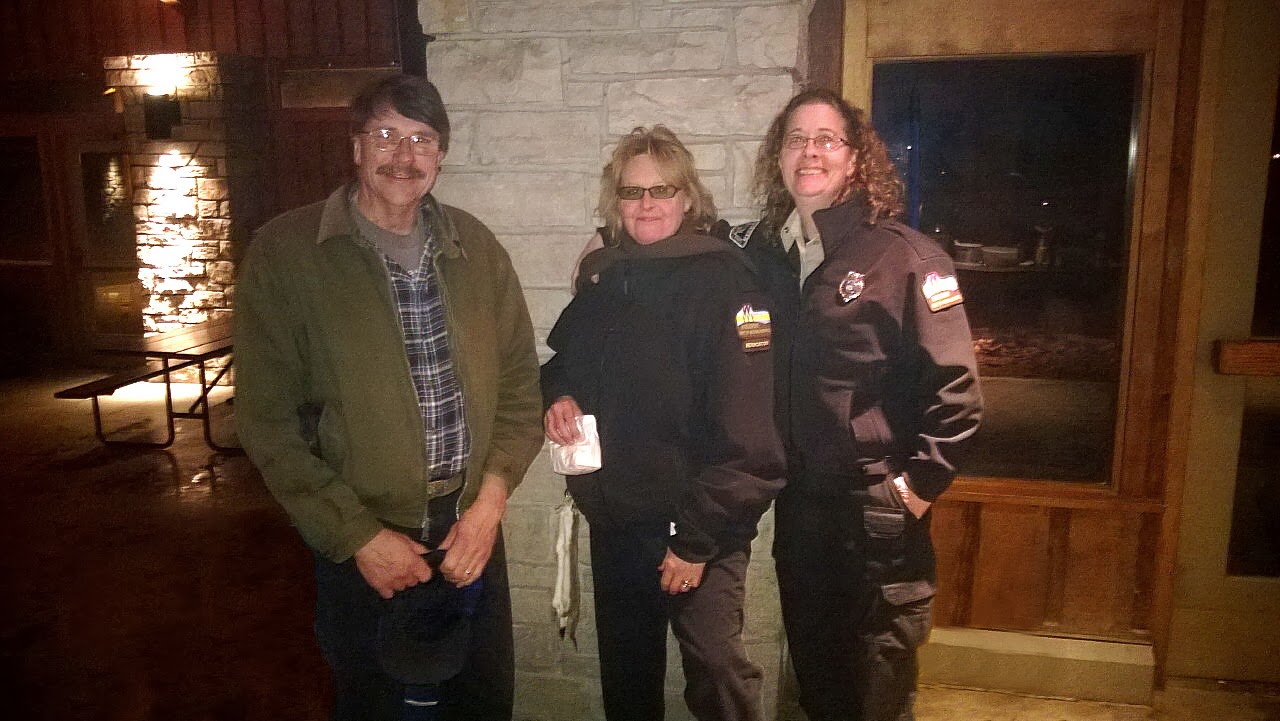 The fire was going good.....  and warming everyone up 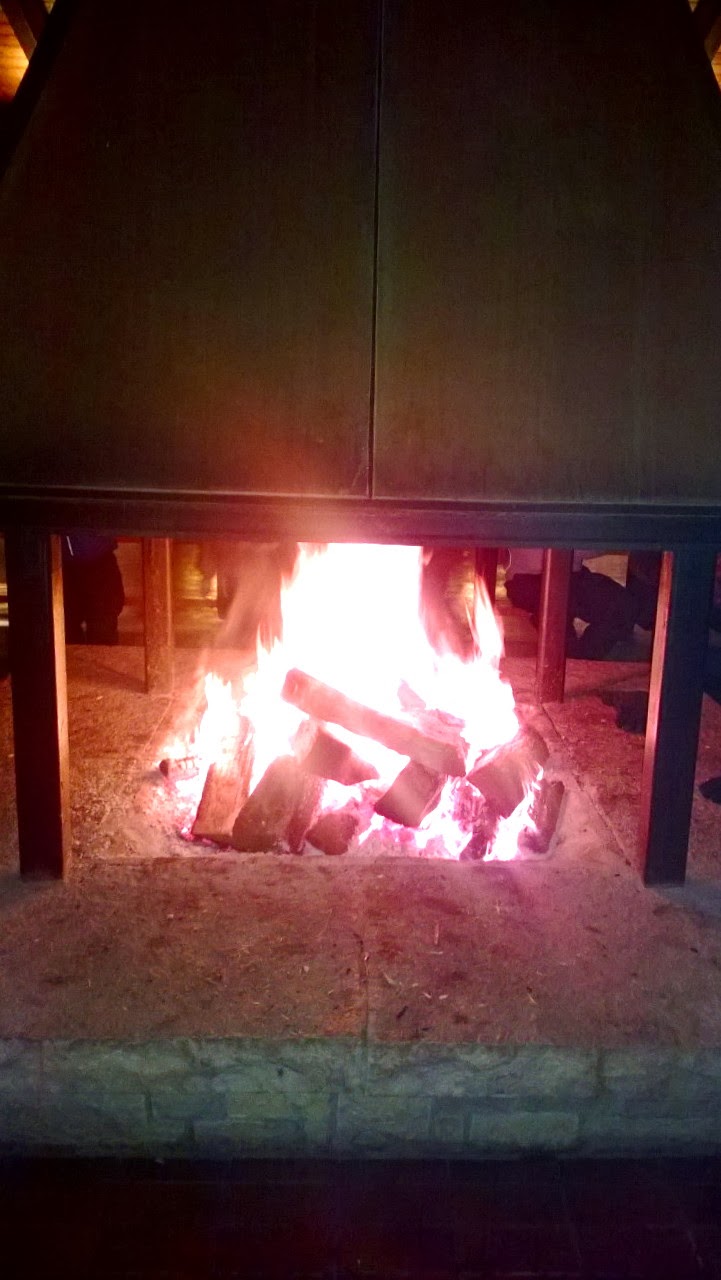 Of course, Steveio had to keep piling on the fireewood! 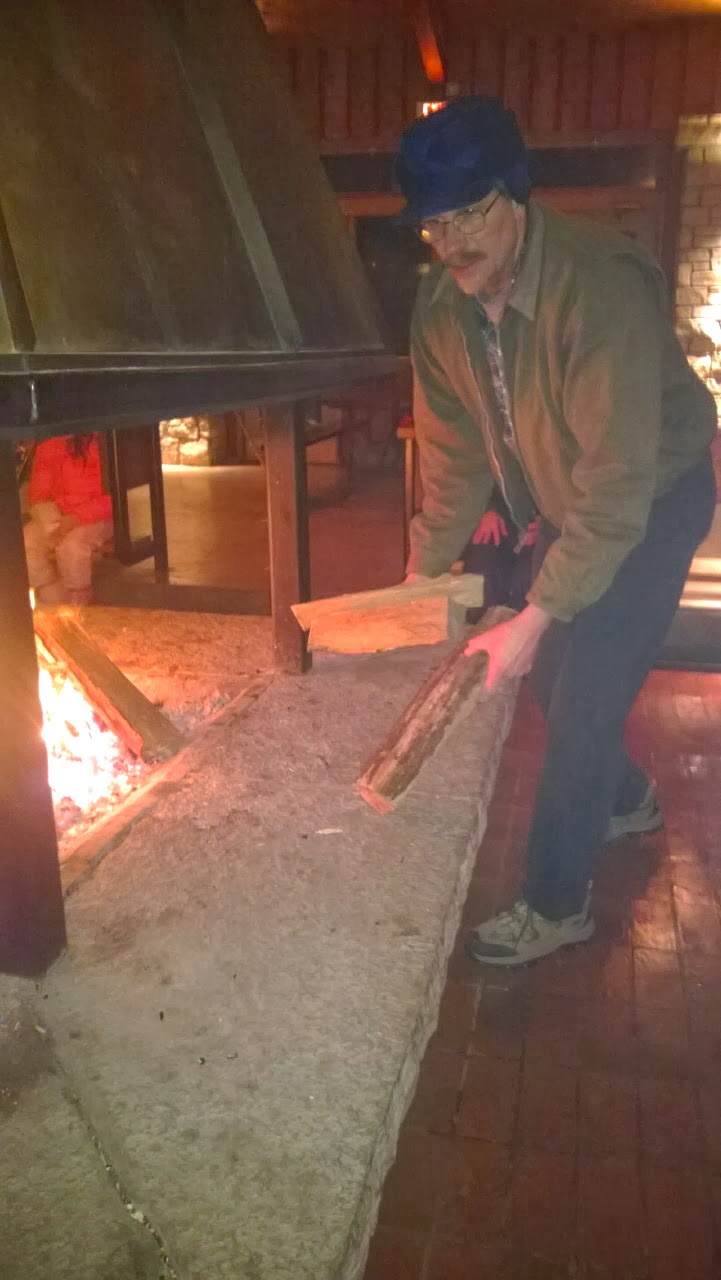 The Friends of High Cliff had a nice food booth set up, with hot cocoa, hot cider,
and some food and popcorn too!   I hope they made a lot of money! 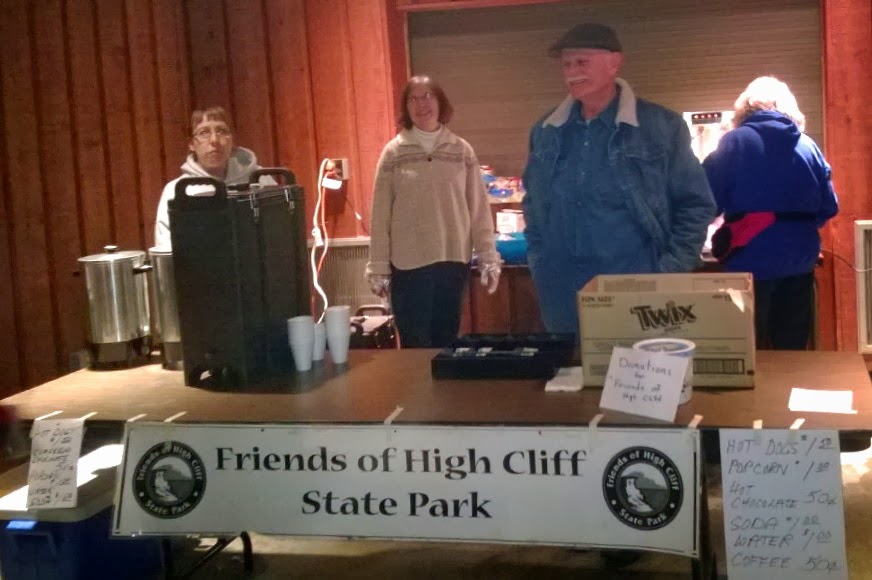 The Park Naturalist, Cindy had a table of fun stuff for the families to explore.
Pelts to touch and a ground hog to talk about Groundhog Day coming on Sunday. 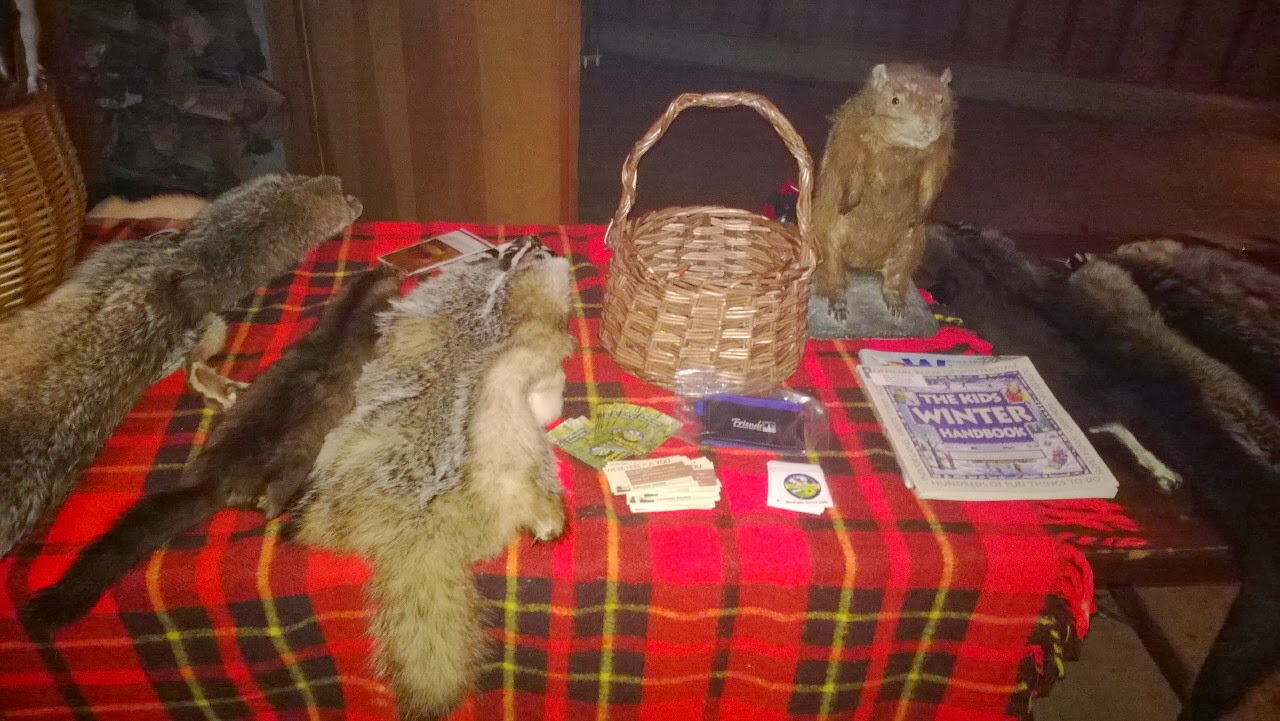 Her display also featured information about the park,
and the snowshoe rental program 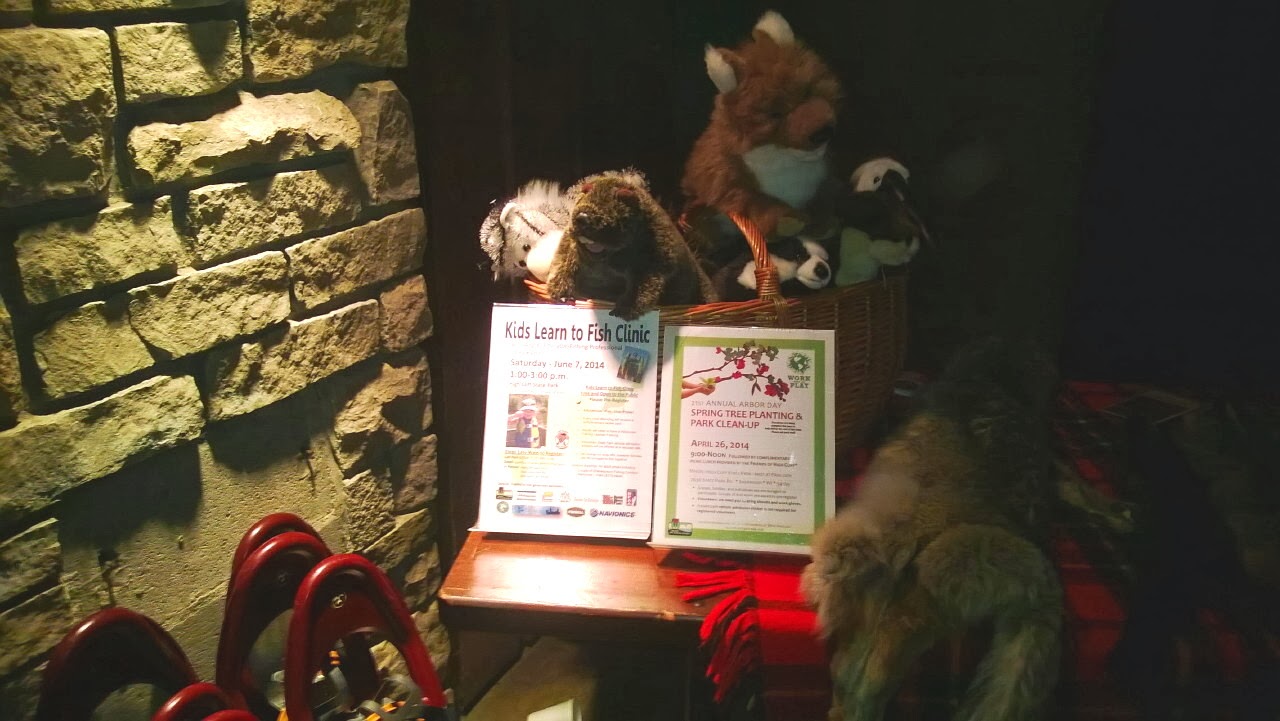 Quite a few people came into the pavilion to warm up, and enjoy the fire in the middle.
A lot of families were in attendance.... 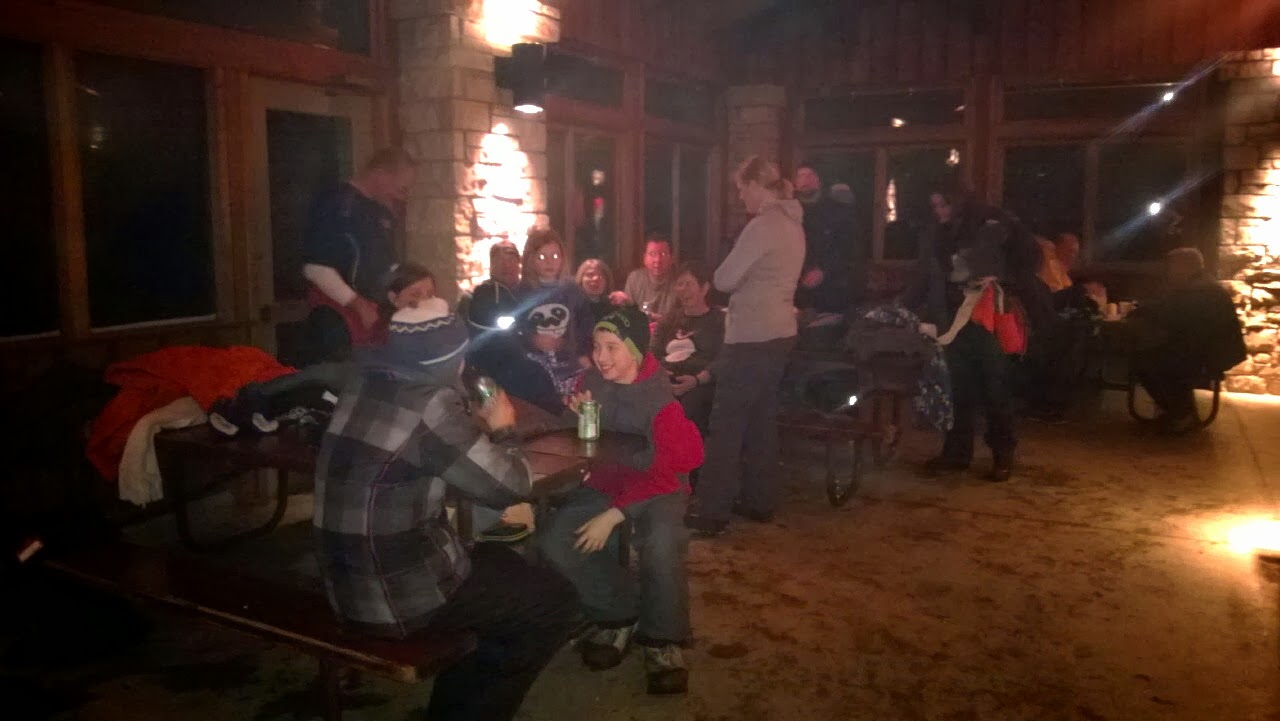 I chatted with these folks a bit as they sat close to the fire and got rid of their chills.... 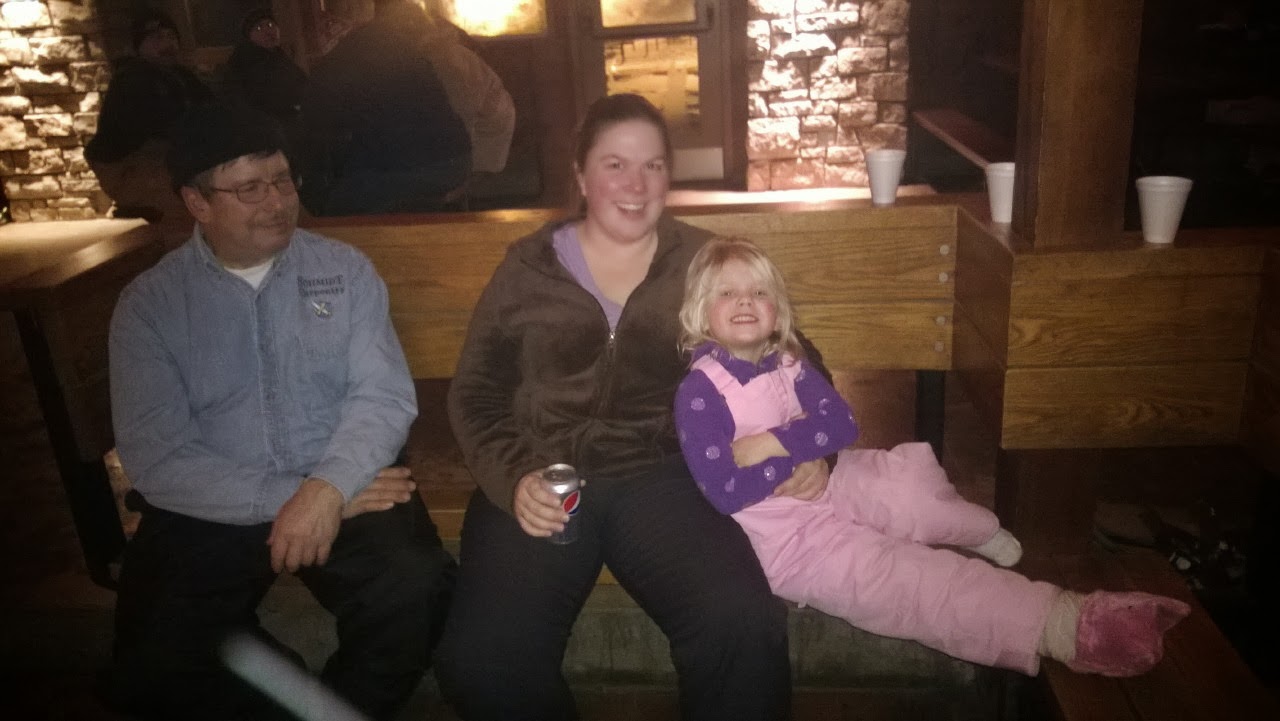 Their zebra-donned daughter was plum tuckered out! 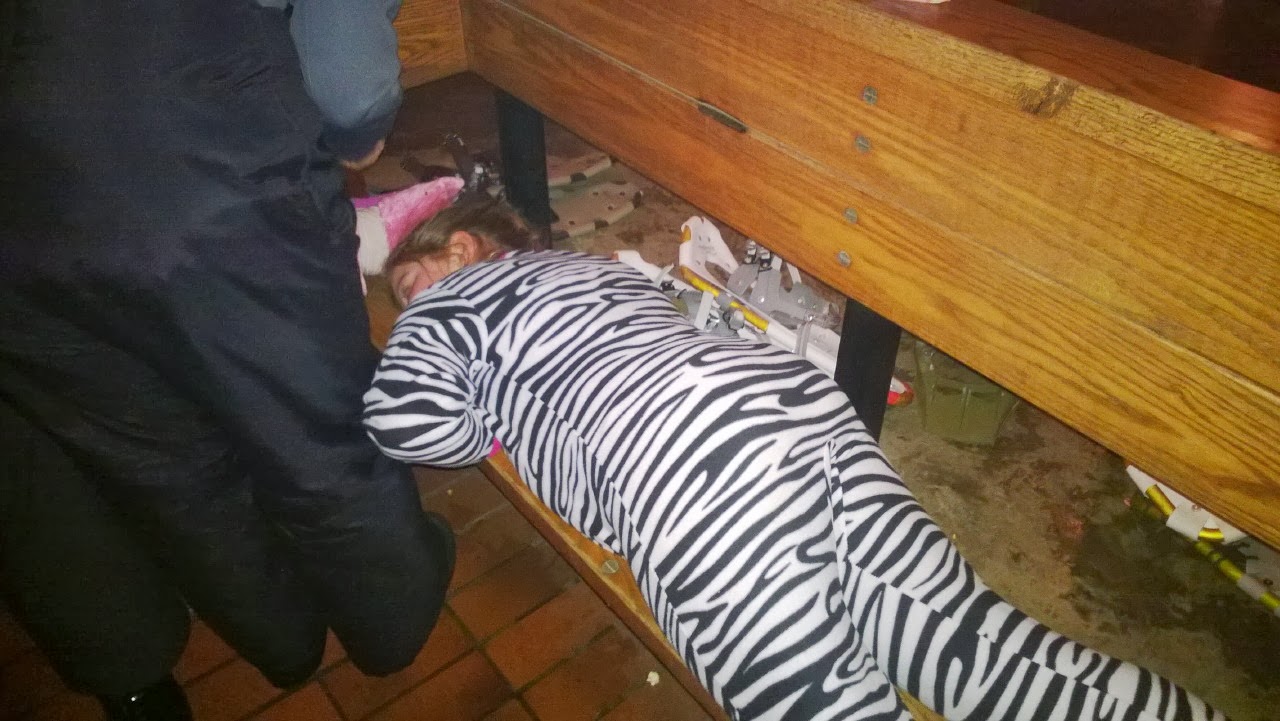 I love the way the lights are dramatically aimed around the building at night.
They highlight the limestone columns between the windows.
I assume the stone is from the big limestone quarry in the park.
At one time the park was a limestone quarry
and has preserved the historic big kilns used to cook it down to plaster and lime powder. 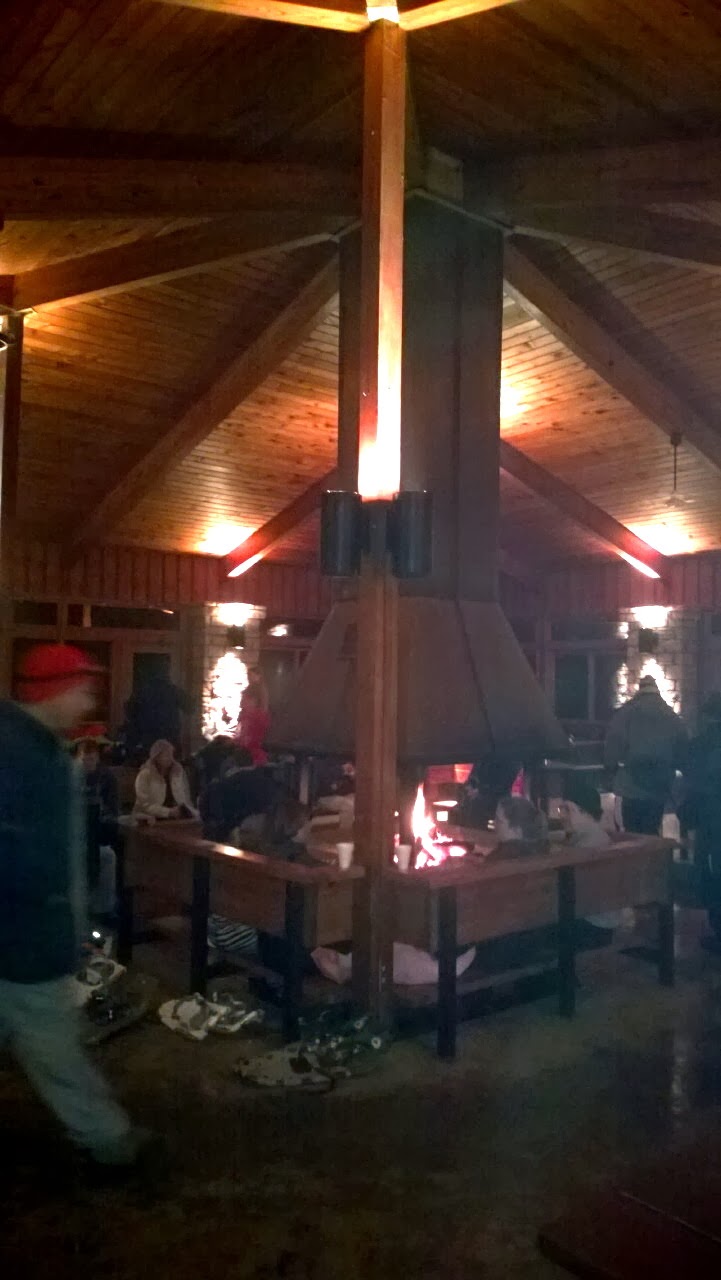 We had rented this building for our family easter gathering last spring,
but that was in the day light and we didn't get this dramatic lighting effect.

Here is my blog post from that day:
Easter Weekend at High Cliff State Park

This is what the pavilion looks like during the day light: 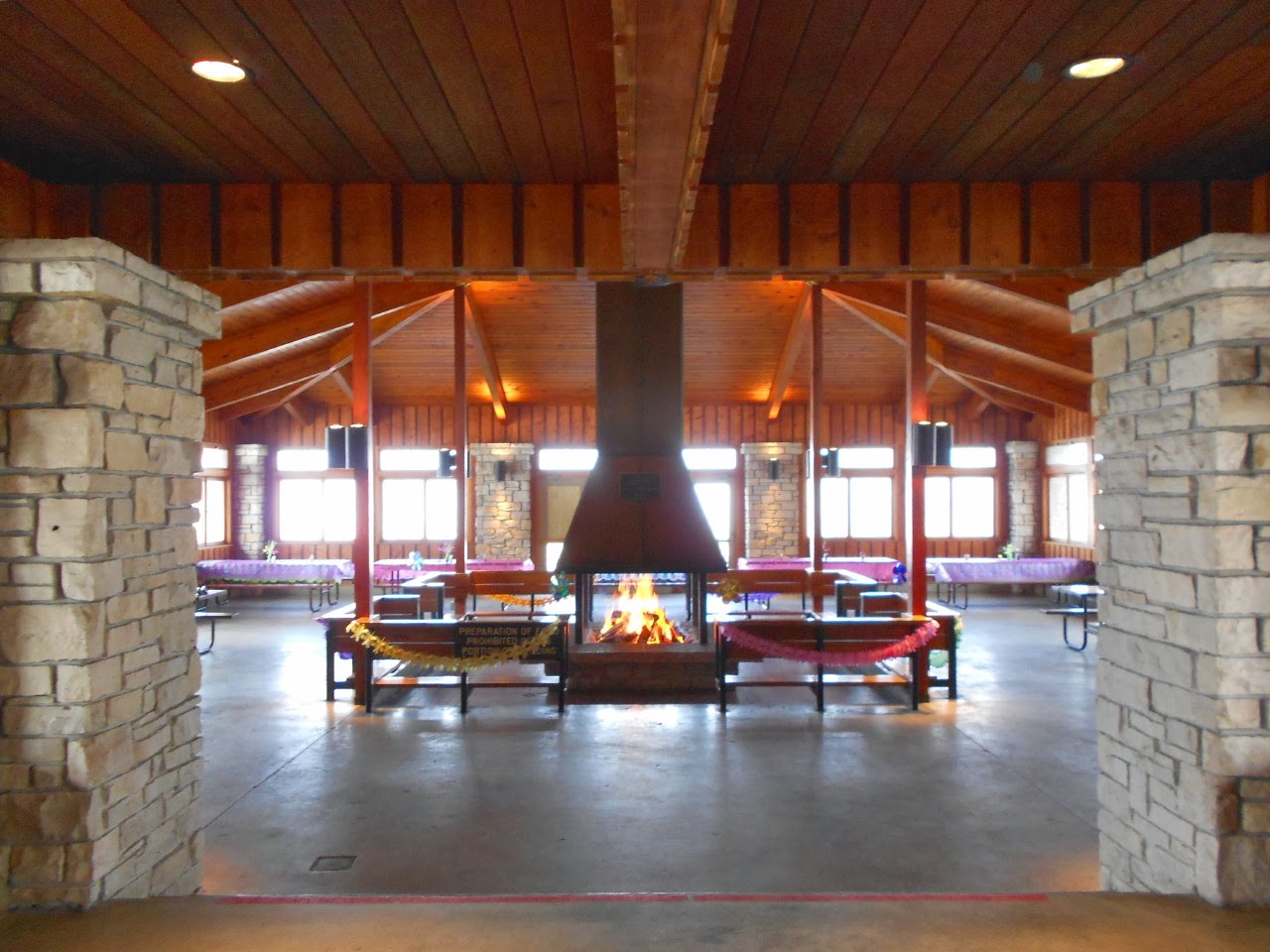 We hung around late into the night.... and helped stow away all the stuff from the Friends food booth at the end of their sales.  Then one by one, the patron folks dispersed to their cars and trucks.... heading on home.  Ranger Jay and Volunteer Jim went out and extinguished all of the lights, so Steve got to stay inside warm and cozy by the fire with the rest of us!   We had some fun and laughter and enjoyment with the rest of the crew.

Slowly the fire burned down---- 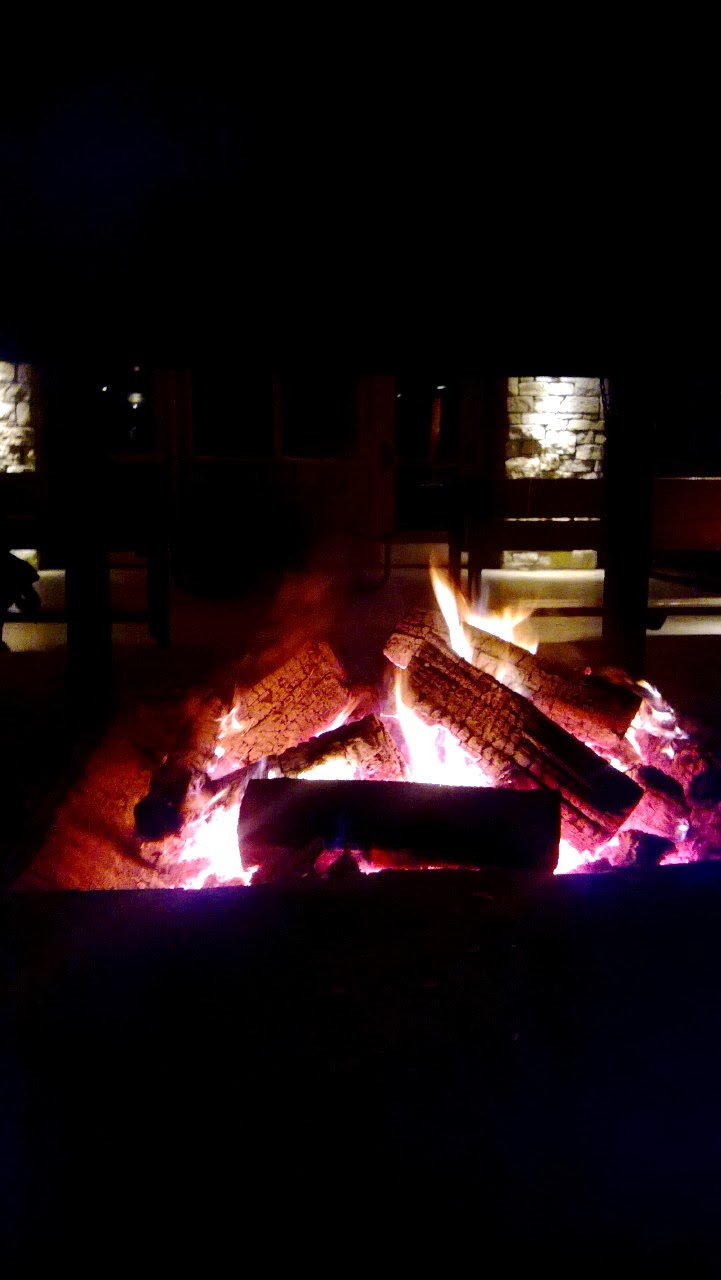 Posted by KarenInTheWoods at 9:25 PM