VACATION- 3 States In A Day

Woke up this morning about 4 a.m.  We knew the temps dropped below zero overnight in Indiana where we had holed up for the night.  We had frost around the inside metal frames of all the windows and the door.  So Steve decided to get up at 4:15 and fire up the generator to plug in the electric heater too.  Brrrrrr

So now that he was wide awake, why let ME sleep??  Soon the dogs were wanting to go out, and all was cold and frosty outside.  And INSIDE???? well, due to the condensation inside all the moisture of the propane heater, and after perking coffee on the stove, plus boiling a tea kettle to have wash water for our faces.... the front windows all frosted up on the INSIDE! 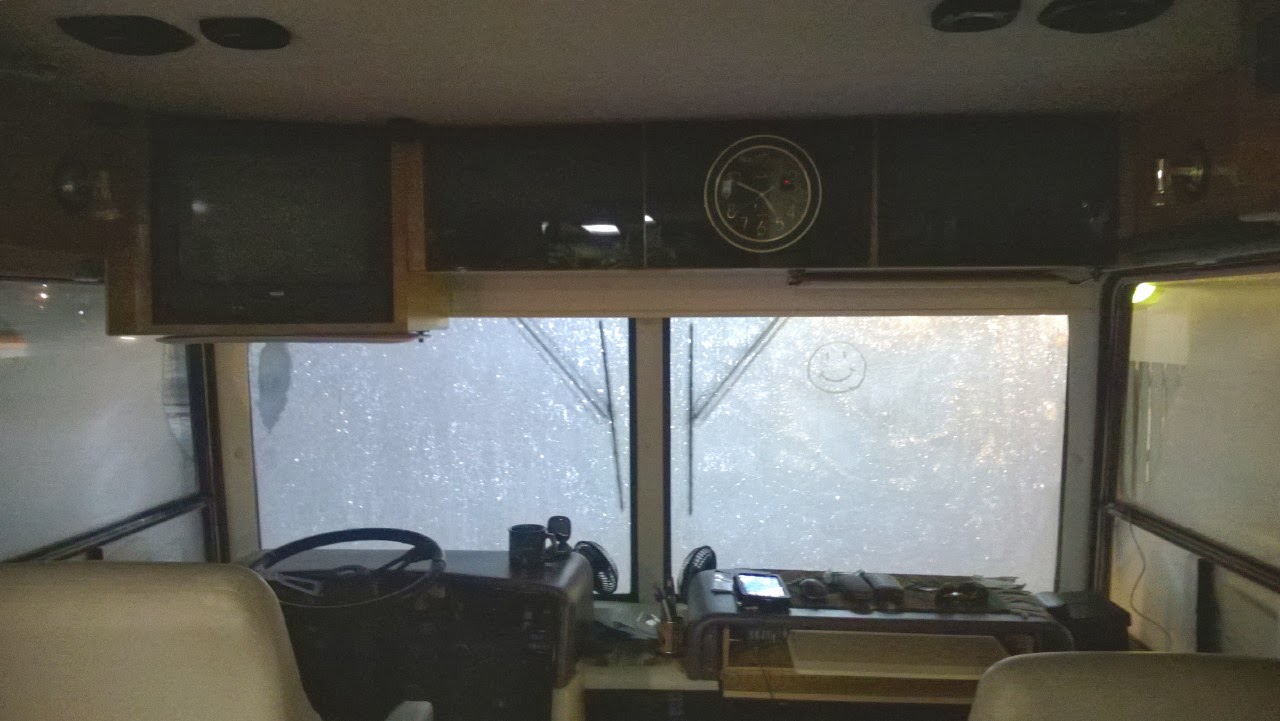 Seriously...  it was frosted thick on the INSIDE.....  (we have had this happen other years before on the first night on the road in February, so it wasn't a surprise)    Steve couldn't sleep and saw the traffic moving well on the interstate, so wanted to head out early.  He fired up the engine and turned on the defrost blower on HIGH.  We have two rotating fans to help spread the warm air, and we have two large fans called O2 Cool fans that we set on each corner to also help move the air around.  Soon we were on our way. 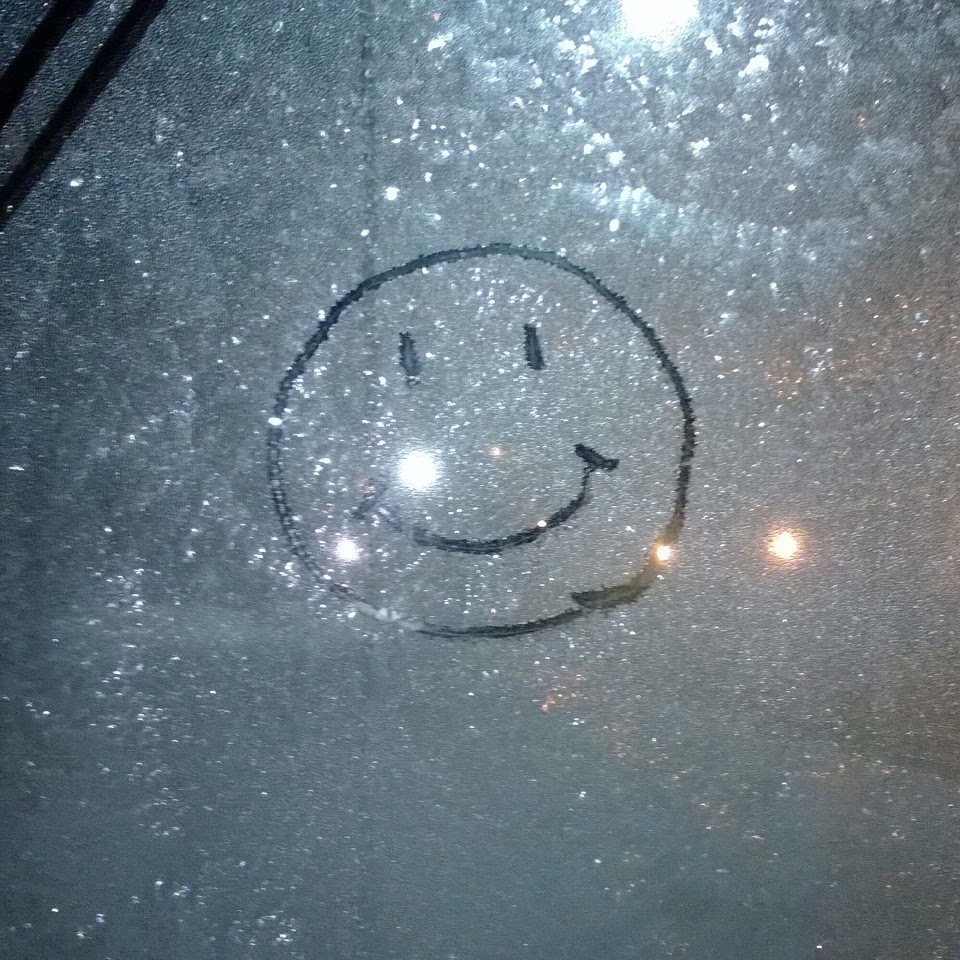 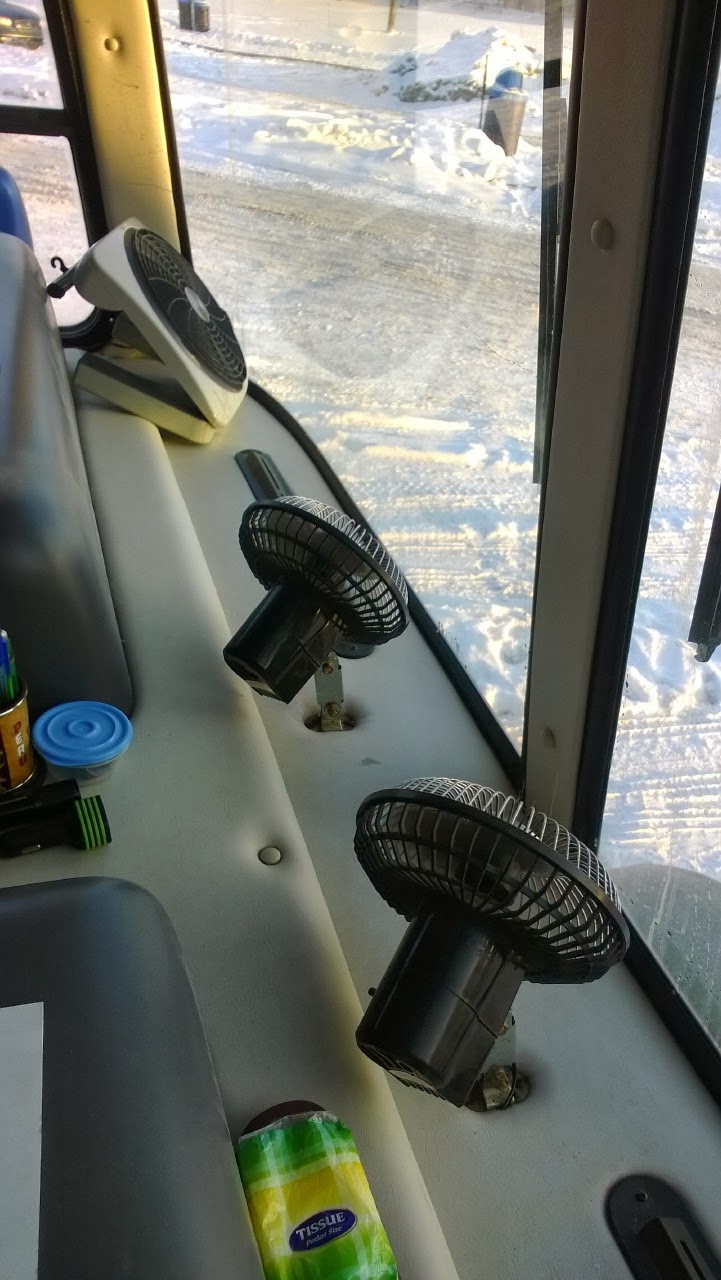 We drove till about 6:30 a.m. and pulled over at a nice wayside to make up some breakfast.  The roads had been clear, but now were having a layer of a mist or humidity on them.  The skies were clear blue and no clouds, but the moisture was possibly making slick driving surfaces and we saw more cars in the ditches.  Not sure if they were new ones just crashed in or leftover cars from last night.  By the time we were done with breakfast, the sun was up and shining bright, and the pavement was clear and dry!

We drove on towards Columbus, Indiana and pulled off the interstate into a parking lot of a big commercial factory that was closed for the day.  Steve found a nice spot in the sunshine for parking the rig, and we unhooked the Tracker.  It was my turn for a little Fiber Adventure!   I drove 10 miles of backroads, twisting and turning along till I reached my friend Chris Gustin's studio....  http://homesteadweaver.com/   I delivered some hugs to her from other weaving friends, and was introduced to her kind and friendly husband, Bob.  We chatted for a while and discussed various projects she was working on. 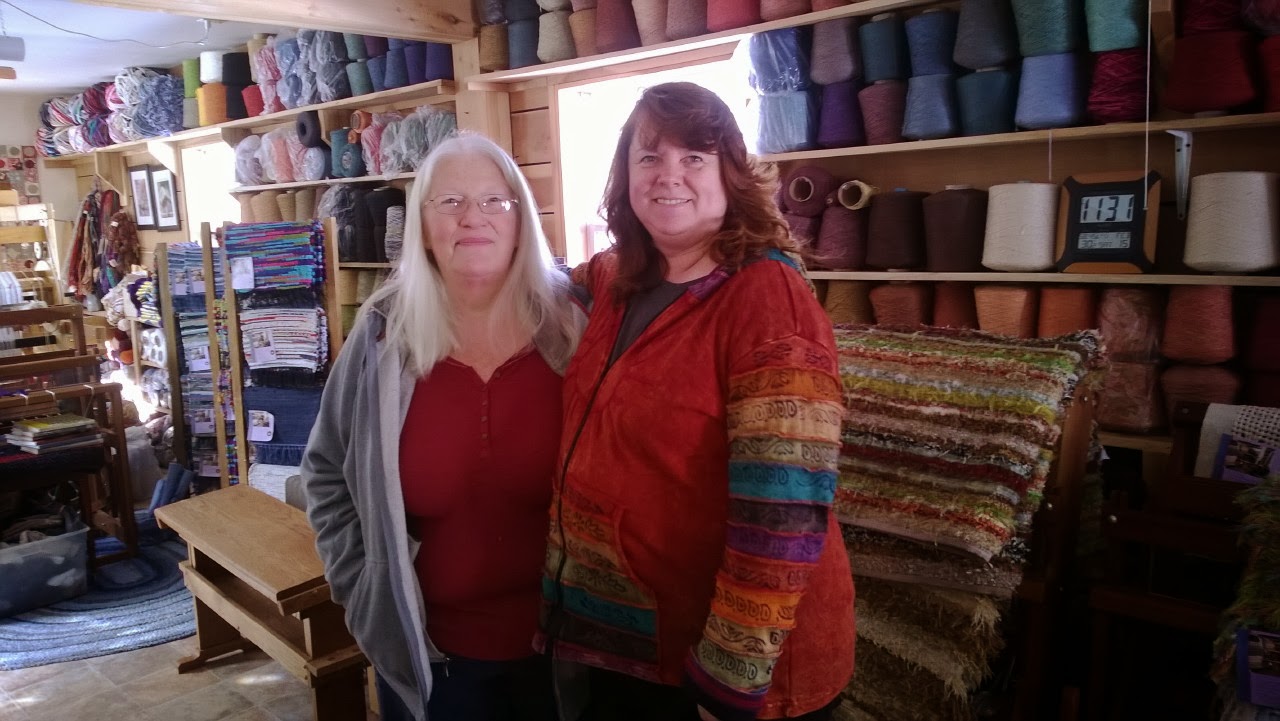 She has a beautiful shop that has been featured in magazines and news stories.
She is also part of  the Brown County Artist Tour each year. 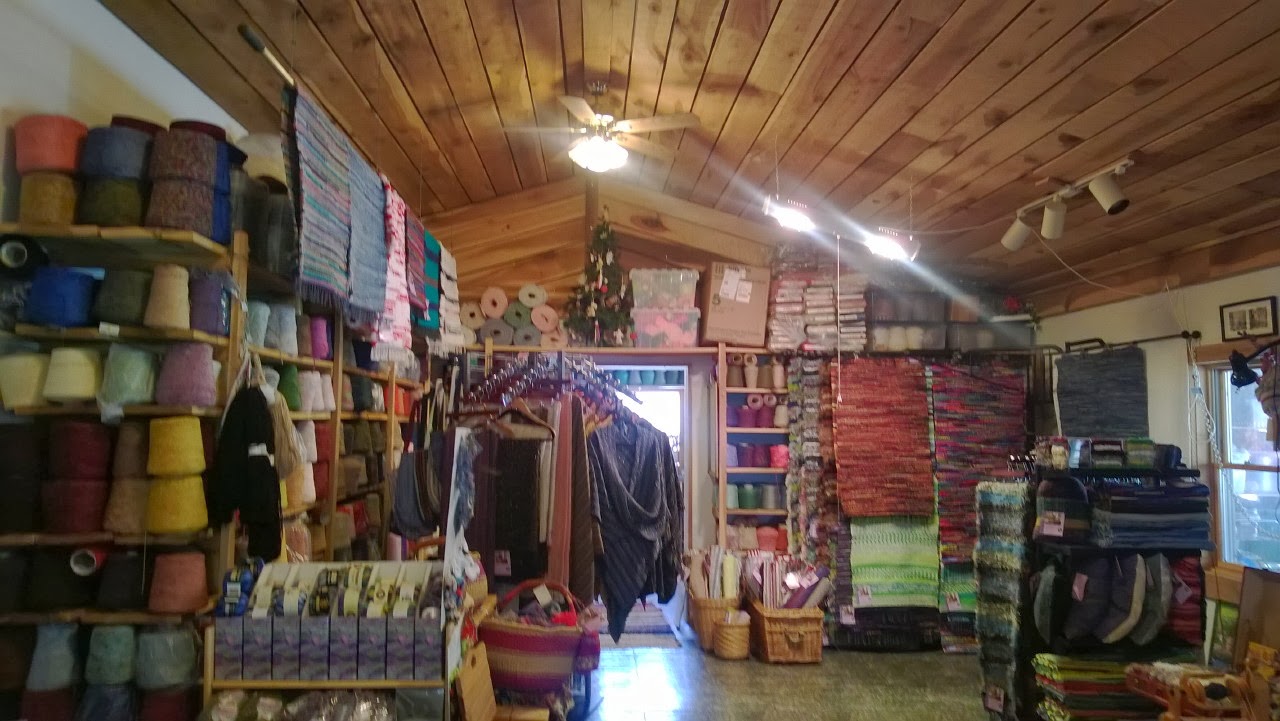 We looked and ooh and ahhed together
and every where I looked was something that I found fascinating
or creative or just completely wonderful! 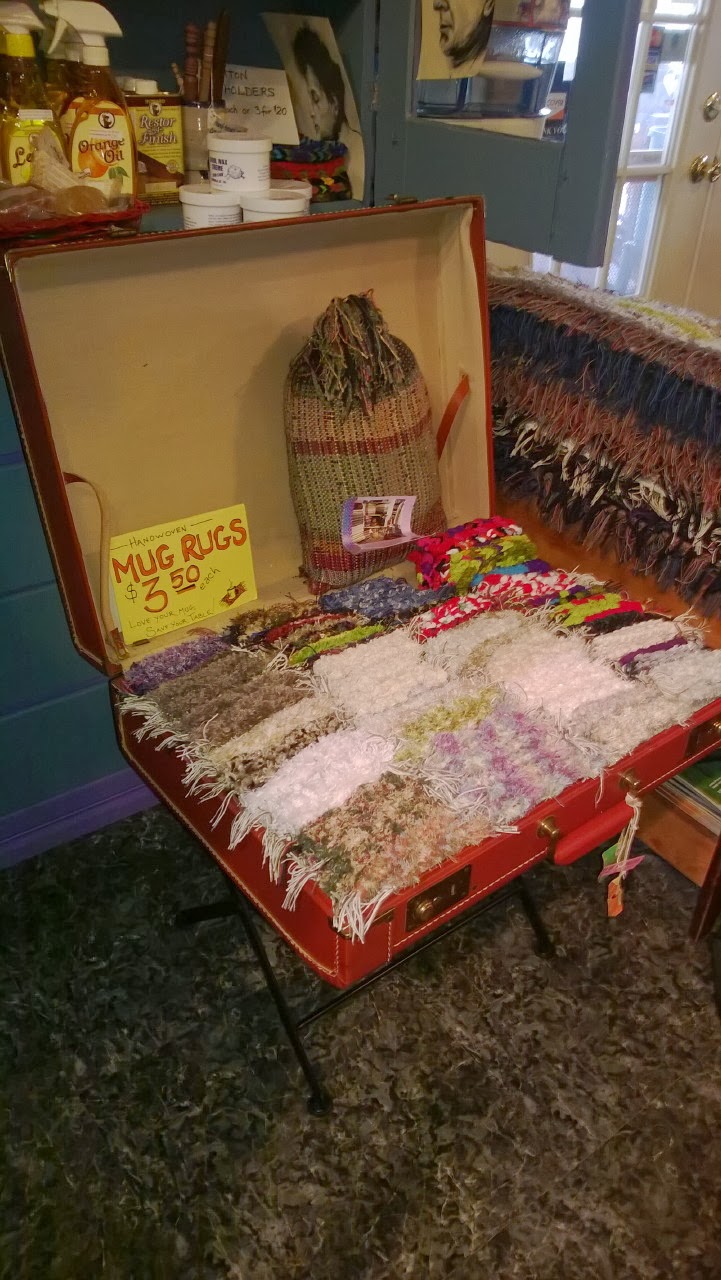 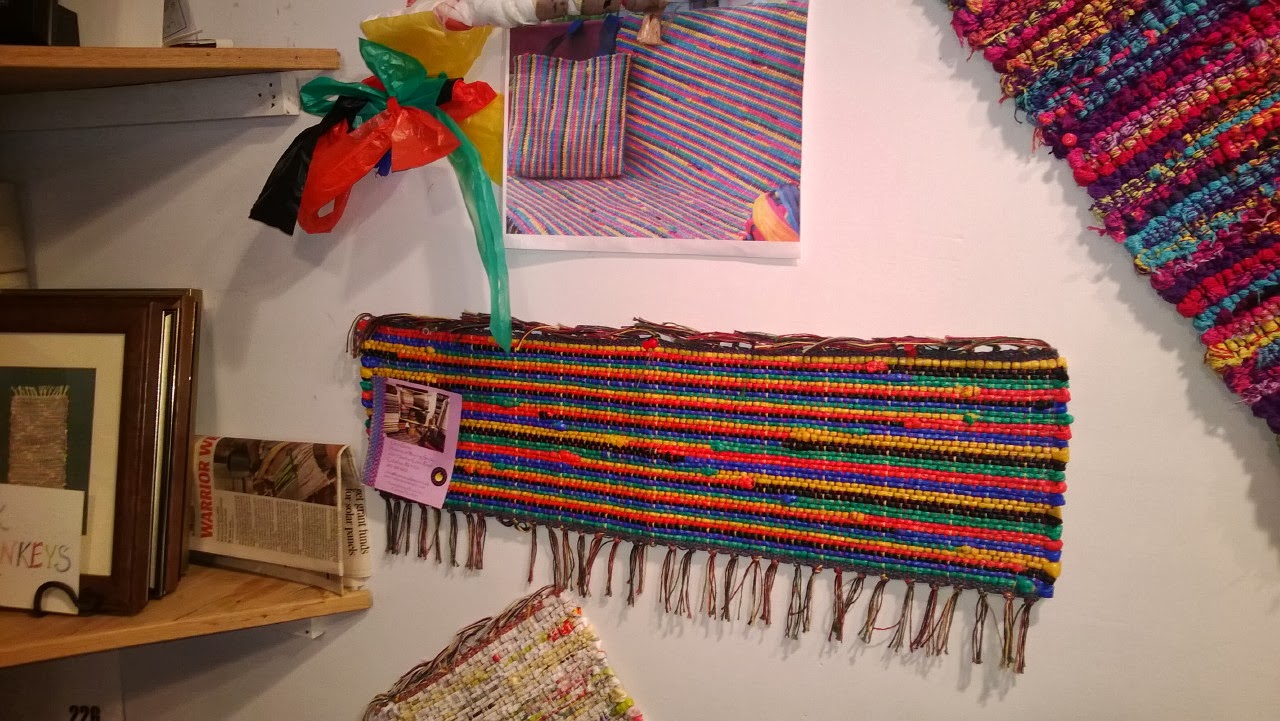 The pic on the left below of her rugs wouldn't focus right on my camera, because of the texture of these great rugs, the camera didn't know what to focus on!   She also makes these beautiful mobius shawls in such pretty colors. 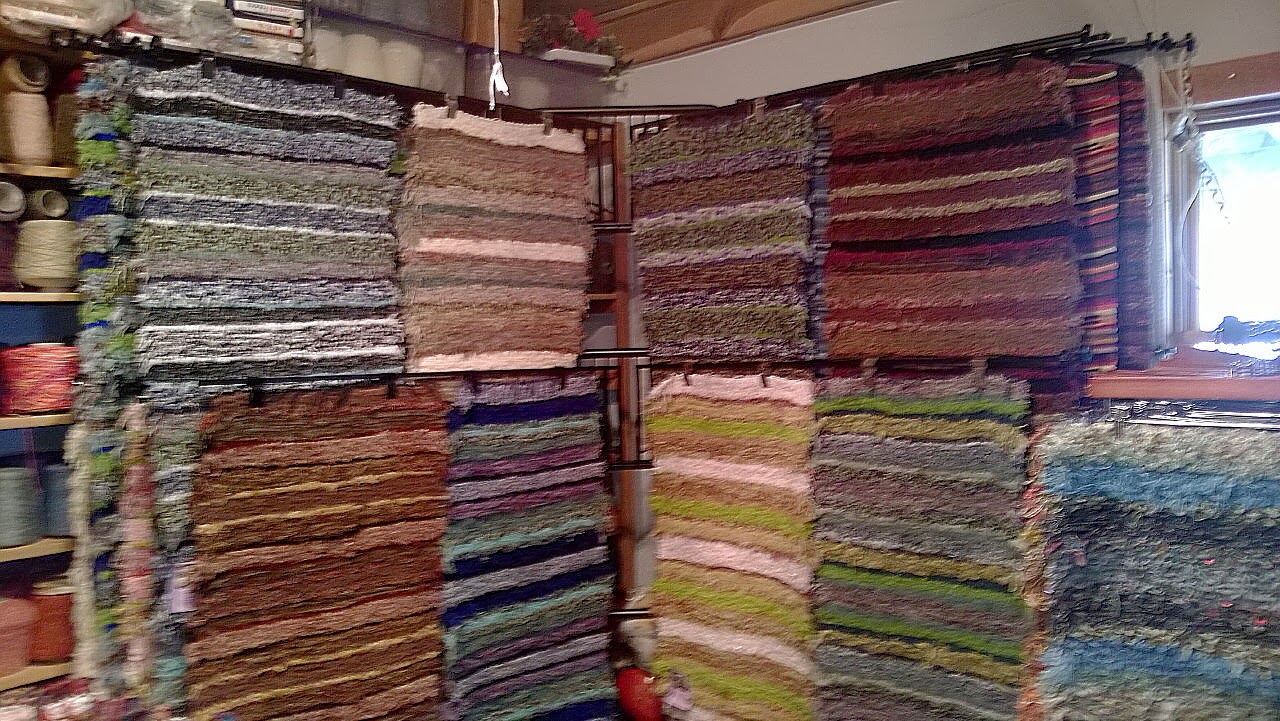 Besides selling wonderful items, Chris has three different areas set up with looms to take lessons on or enjoy watching her weave on them.  This loom of lovely cherry wood is sure a sweetie! 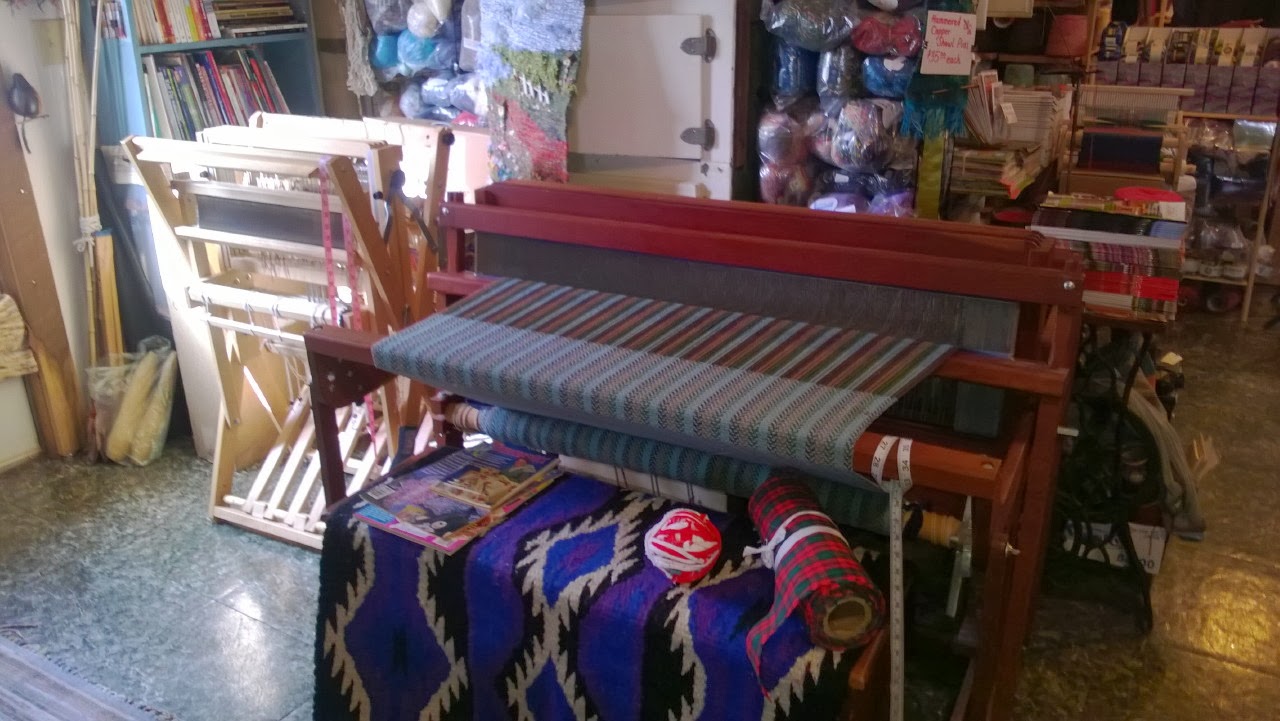 This is part of the new addition she added since last time I had been at her studio.  She has larger looms here and can weave wider rugs in this area.   The walls are lined with cones of every color of the rainbow! (artfully arranged of course) 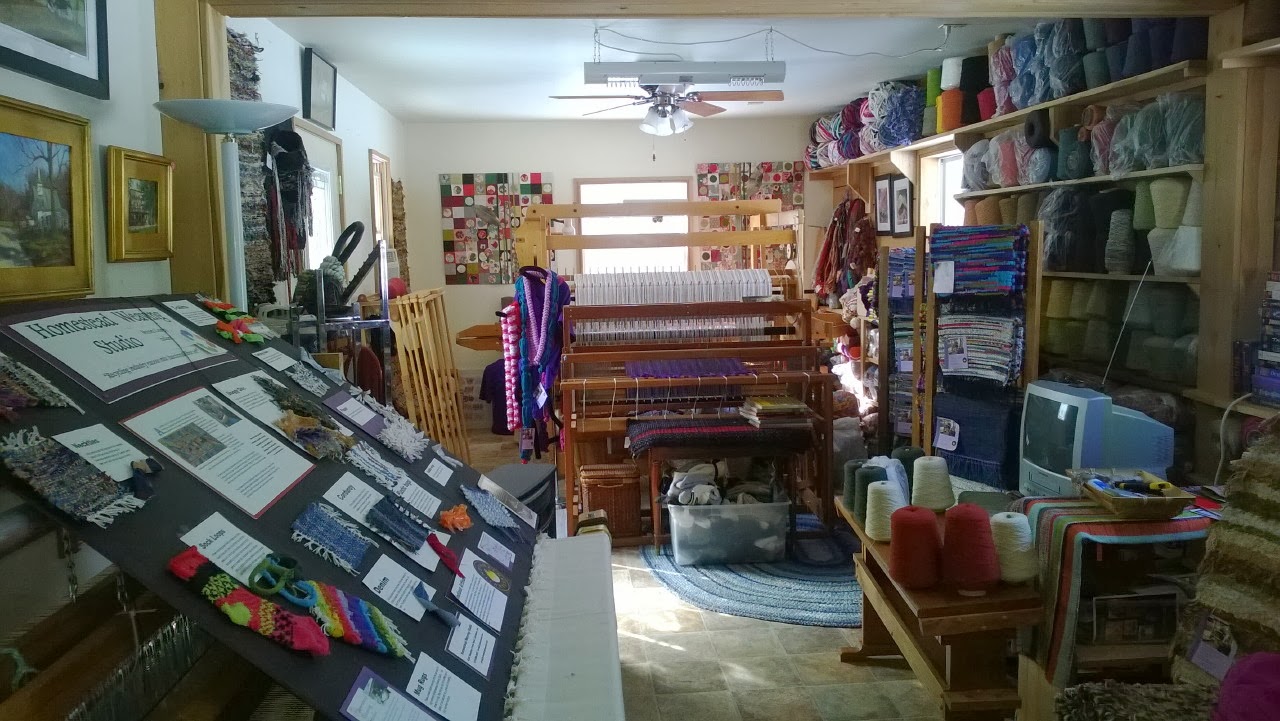 Too soon, it was time for me to leave... .we hugged our goodbyes as Chris's husband Bob was loading my bags of goodies into the Tracker.  Shhhh do you think Steve won't see all that new yarn and stuff hidden in the back of the Tracker?  heh heh.

I wound my way back to a patiently waiting Steveio and doggers Finney and Duke.  They had taken a nap while I was gone and were now ready to get back on the road.  We hooked up the Tracker, double checked the connections and headed on south down the road again.  We were hoping to find places withOUT any snow... wonder how far south we have to drive to get away from it? 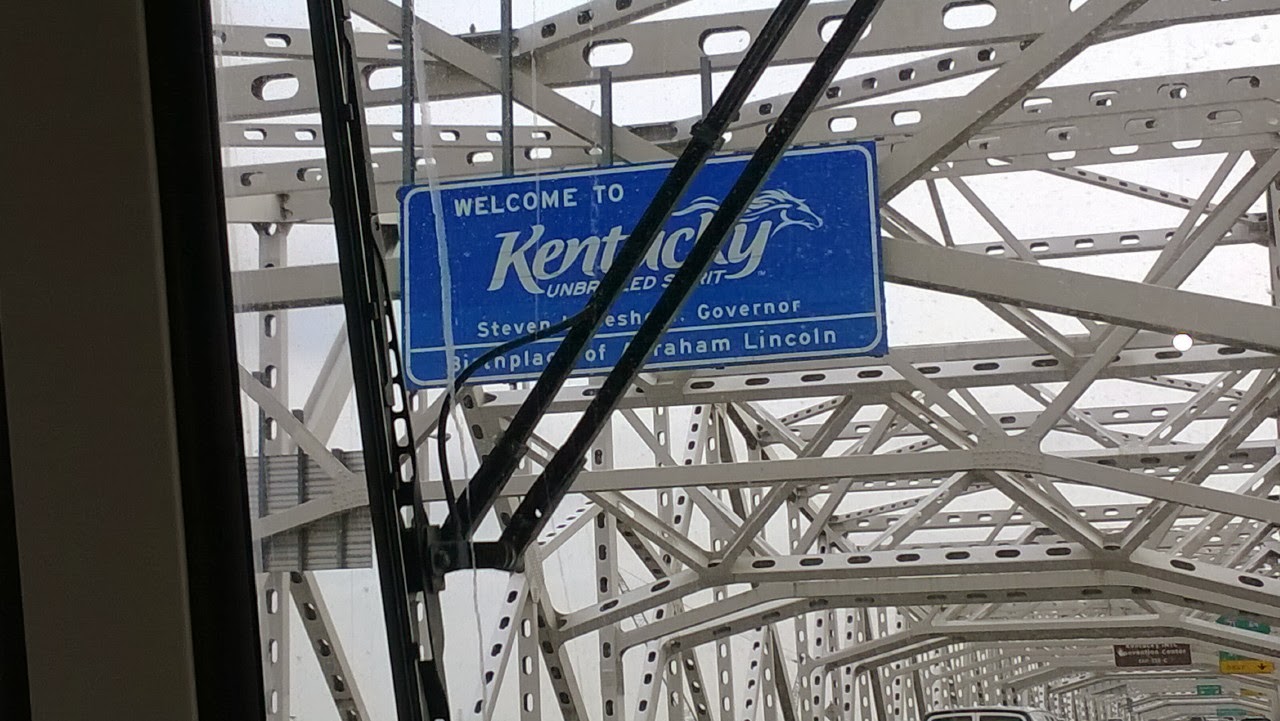 As we crossed over the bridge into Kentucky,  I just leaned over with the cell phone and snapped this pic of a barge going up the river.  It came out pretty good at 50 mph taken on a whim between the posts of the bridge supports! 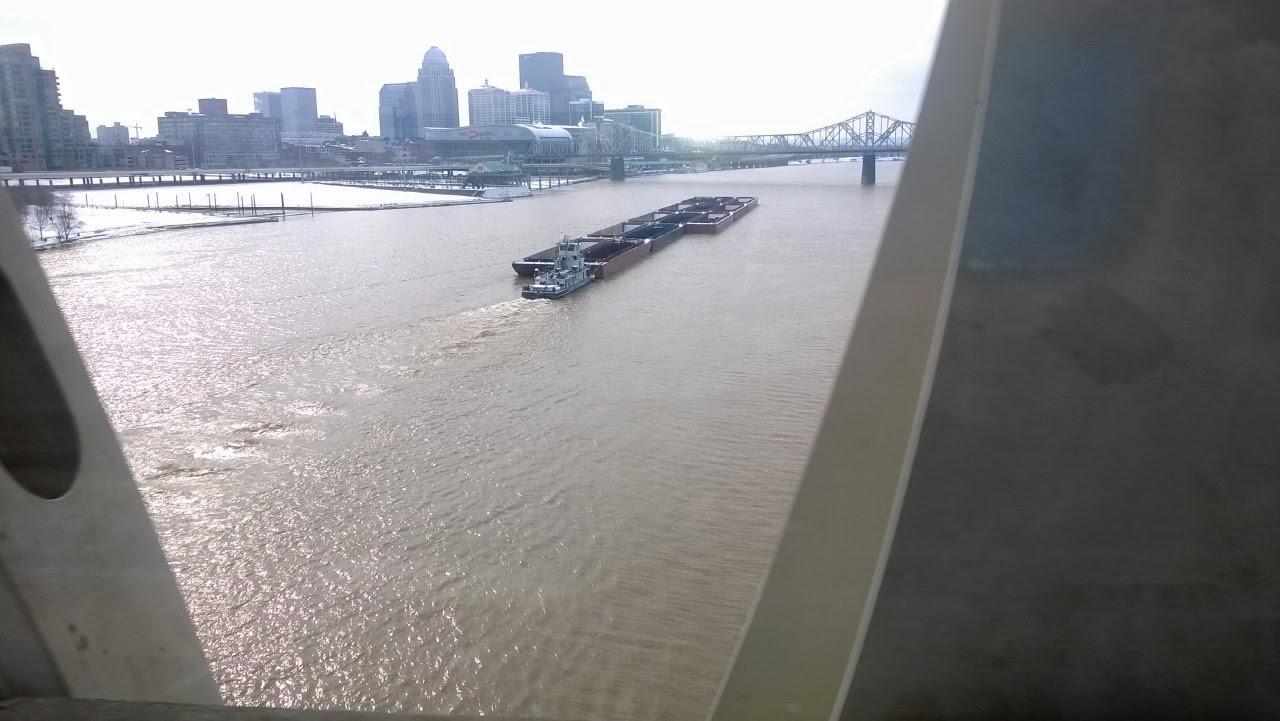 We drove on, and still was that danged snow snow and more snow on the ground.   Of course we had to snap some pics of this tunnel, I think I have pics of this same tunnel every time we go this way! 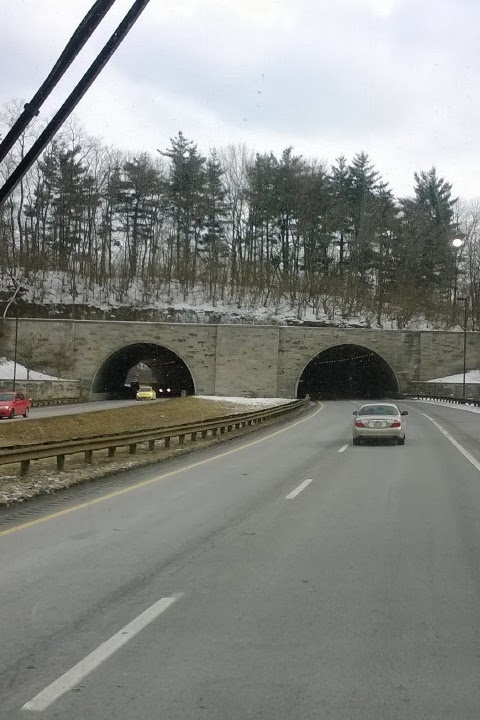 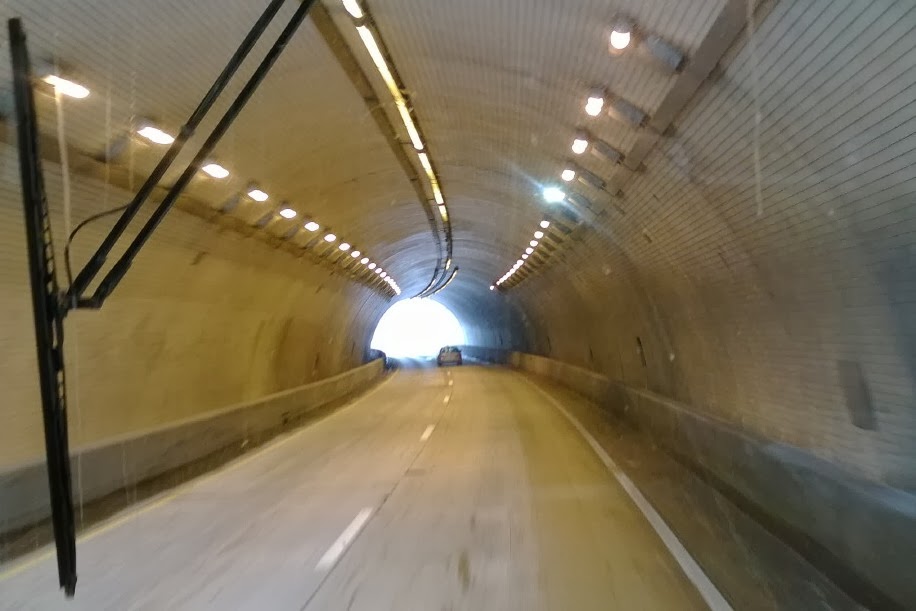 It's not a long tunnel, but just kinda fun to say we went through one
and saw the light at the end of the tunnel! LOL


We found these frozen waterfalls in the sections of cut through parts of the mountains very pretty... just flash frozen in mid stream.  How cool is that? 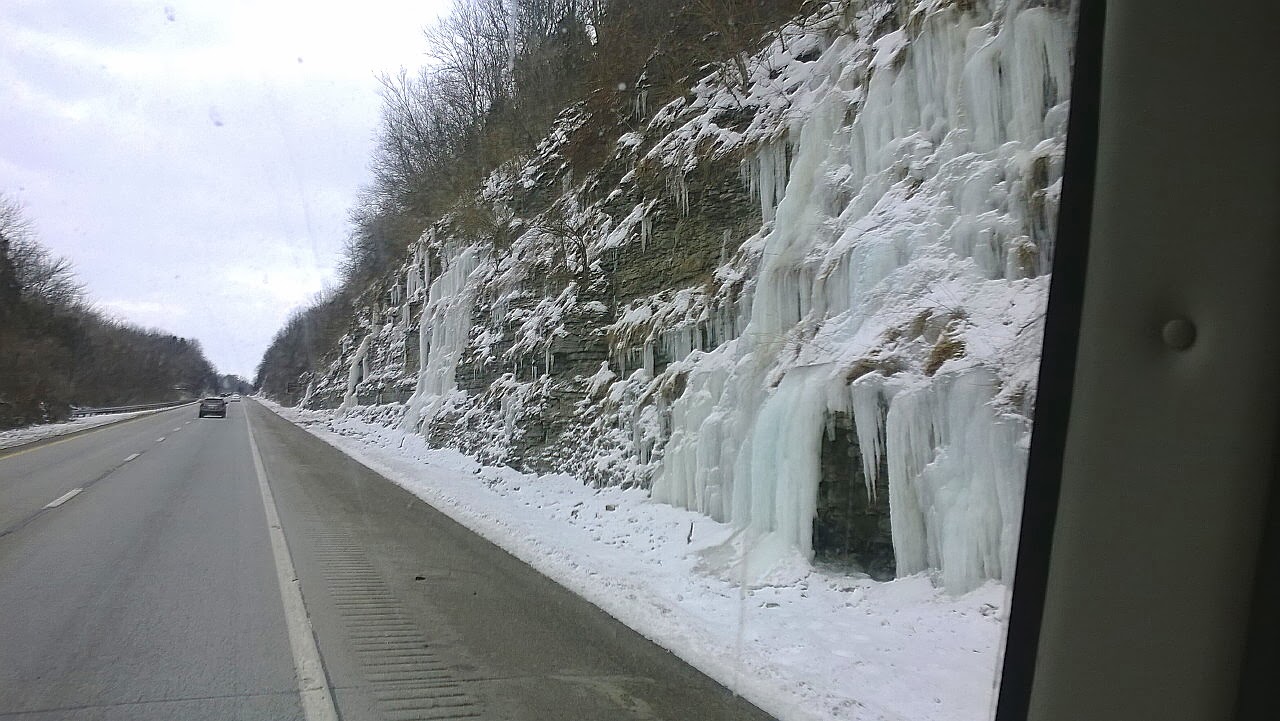 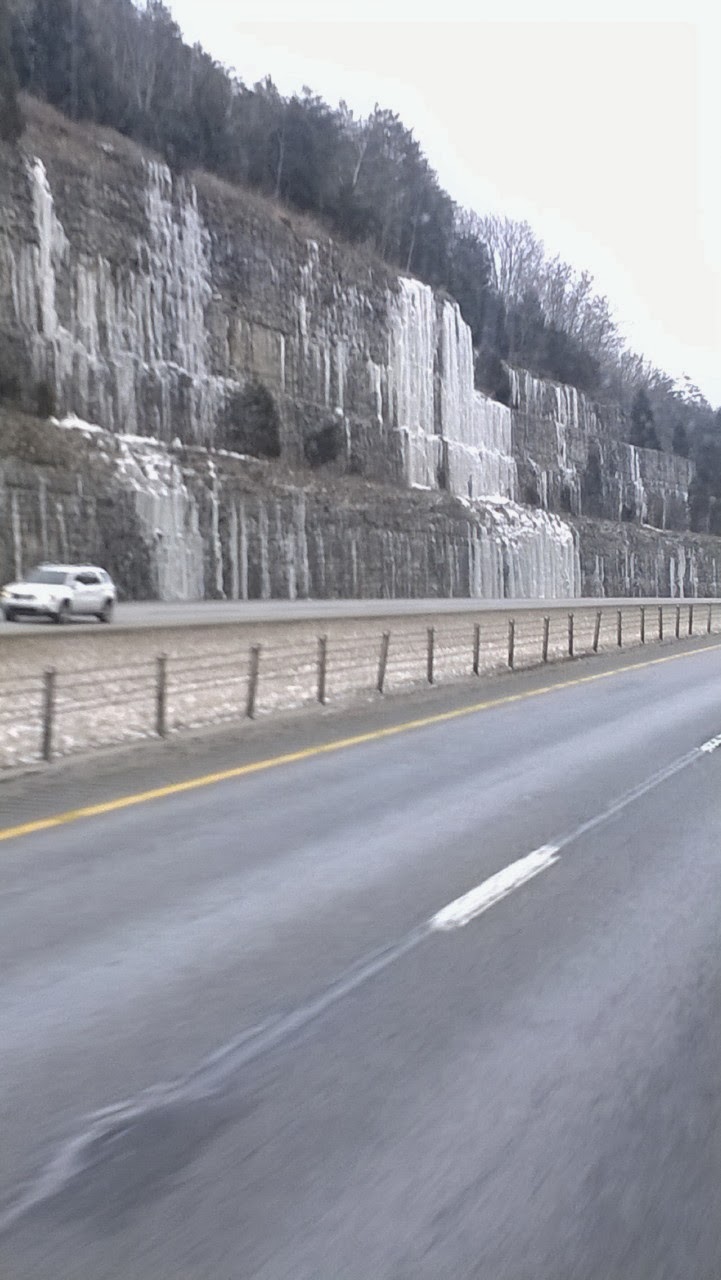 From there, we wound out way through narrow valleys and up on top of high hills.  After Jellico Mountain, we cruised our way down down down in the darkness until we entered Tennessee  (too dark for a pic of the sign, sorry!)

We knew where we were going...  just three miles from our friends Linda and Mark Baldwin's home is a nice little RV park run by the Escapees.  It's called Raccoon Valley RV Park   We had called ahead and they said pull in any time to any empty site and we can pay up in the morning.  How nice is that?


First off, we had to get the dogs out on their leashes to do their thing...  oh my were they ever surprised to see GRASS!!!!    It was not SNOW!   They were both so confused---  the last time they were out the door in Kentucky it was all snow, and now .. strangely.. it was grass??? 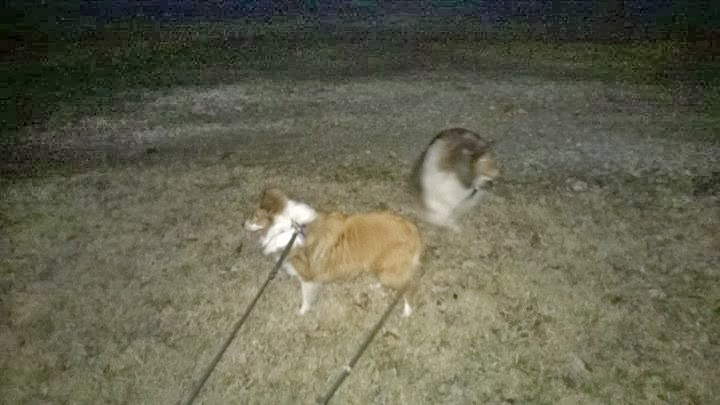 How could this be?  Our magic motorhome brought us to some grass?

It was after dark as we got settled into our campsite, but we knew where to go and got leveled out and set up.  Once Steve plugged us in, I was able to make up some supper. It was now after 7 p.m. and we hate setting up in the dark.  Steve hooked up our water lines so we could take showers. but the temps are going to drop so we had to unhook the hose to stow away to prevent freezing.  Dang, our water pump is not priming and has some air in the lines from the big fresh water tank.  ACK!   He messed with it for a while, but gave up.  He can look at it more in the daylight and figure it out.

Posted by KarenInTheWoods at 9:57 PM