Last of the Grandtots Visit, the Cabin, and getting STUCK!

This morning was started with wee Chelsea crawling into our bed about 2:30 a.m.... she snuggled in for the night, planted a few good kicks on both Granfaddah and me, but we made it till morning. Little Clayton snoozed till 6:45 and toddled into bed for his morning snuggles too.

Soon as Steve got our coffee was going, we all went down to start the day.... Steve was working on letting dogs out, while this Grandmuddah decided Clayton should "breaka da eggie" again to make sure he got a good understanding of the process!   With his big sister supervising----- Pretty good for not even being 2 years old yet-

The result was a very good cinnamon coffee cake!   I am pleased to say that little Finnegan is getting along very well with having the two wee ones in the house. He is learning to hang out UNDER their table and not steal things from ON the table.  He is figuring out that sooner or later, they dump stuff under the table, or they just hand it to him if he takes it carefully!  LOL ...stinkers! 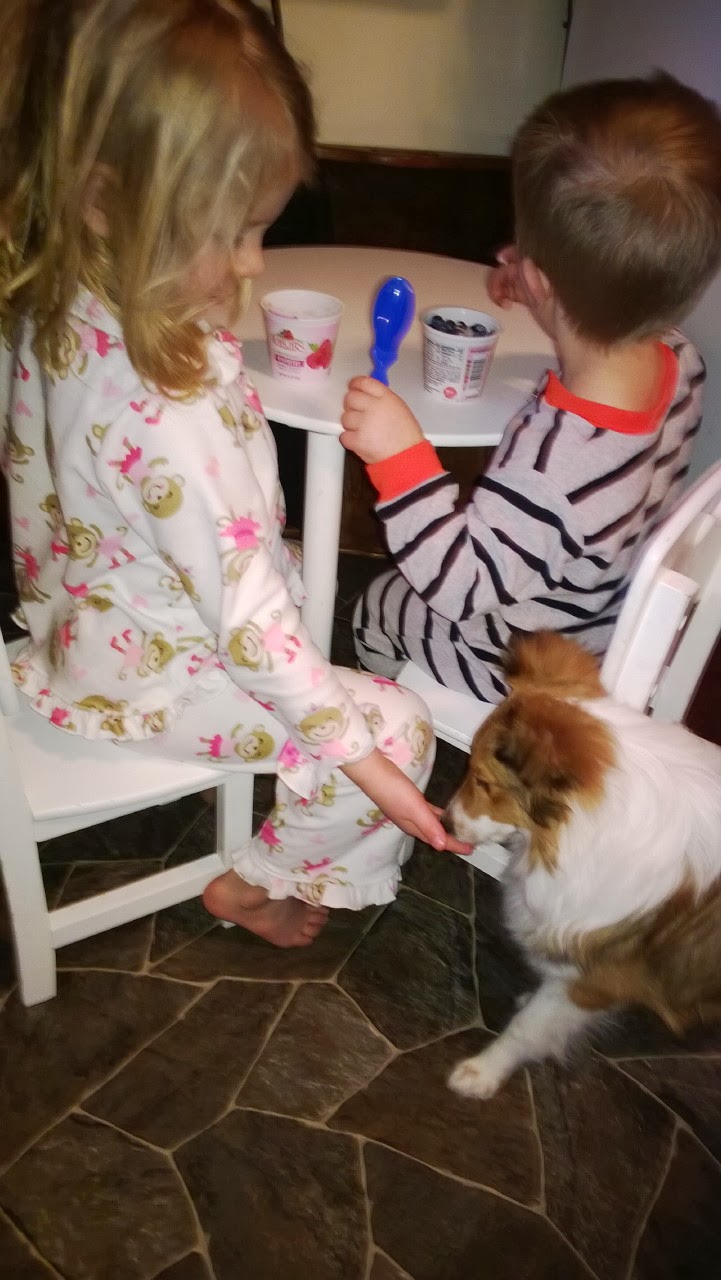 Although, he did eat a green crayon yesterday, and we had some colorful poop out in the yard this morning!!!!

After breakfast was done, we got them both dressed, and put their laundry in the machine.  I like to try to send them home with all clean clothes again... not only as a thoughtful gift for their parents, but also so the parents can't detect by the food stains all the stuff we fed their kids!!!! LOL

Steve and Chelsea got busy with some rousing games of Chutes and Ladders.... and when Chelsea beat him at that, it was time to haul out Candyland.  Again for some reason, she is the WINNER! Little Clayton was so seriously busy writing on the clipboard with a REAL pencil.... and he did a very good job keeping score of their games. 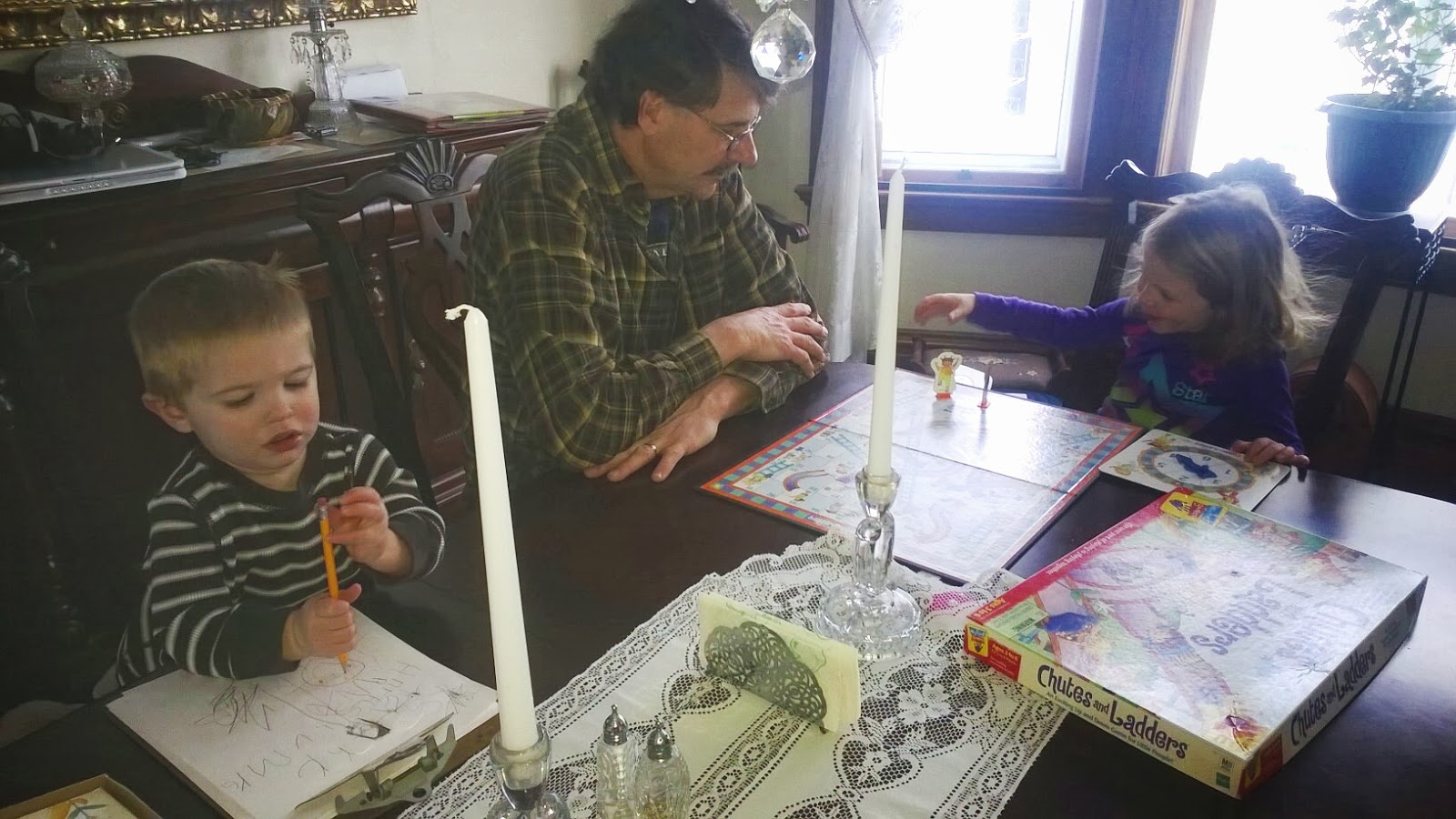 It was turnabout to fair play for Chelsea.  On Friday night she did my hair, so today I did hers.  Oh what memories of braiding both of my girls' hair with french braids!  She wiggled and giggled, but we got it done... kinda sorta....   and spritzed her with hair spray to make it hold for the day with her baby fine wispy hair. 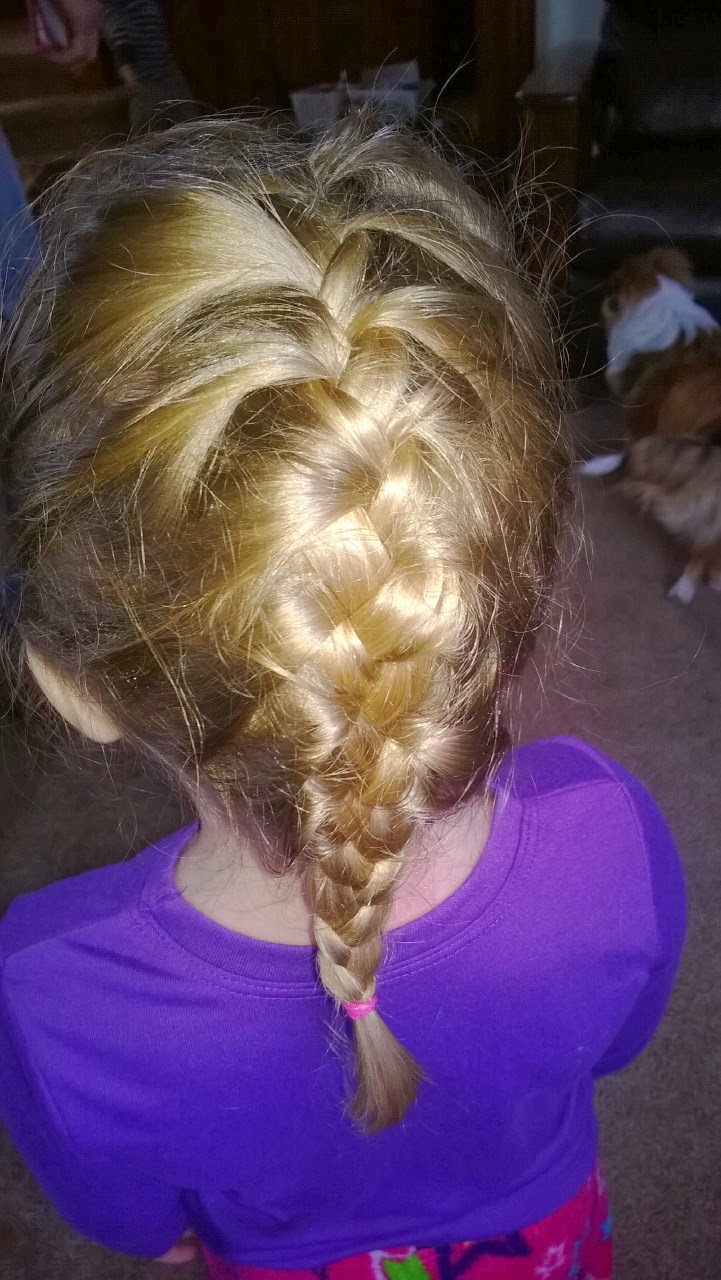 Some mid-morning wrassling took place on my favorite spot in the house, the bottom landing on the stairs in the foyer.  The kids tackled granfaddah and he tackled them back.  A good bit of giggles, tickles and using him as their jungle gym.  Of course the dogs had to get into the act too. 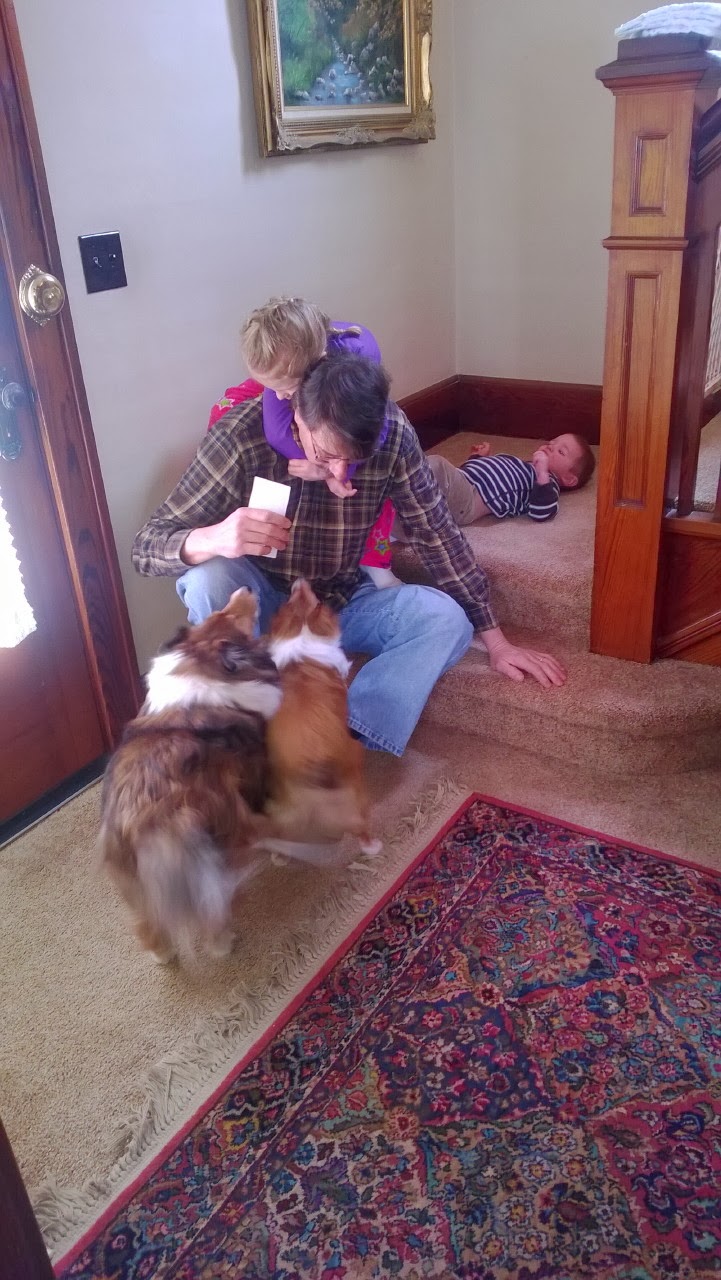 Erin and Mark called and said they were ready for us to come on up to the cabin!  It's about a 2- 2.5 hour trip up there.... when we told the kids that it was time to go home, they HID themselves!!!!  Under our island, behind the two stools.. they sat quietly and hoped we wouldn't notice them. 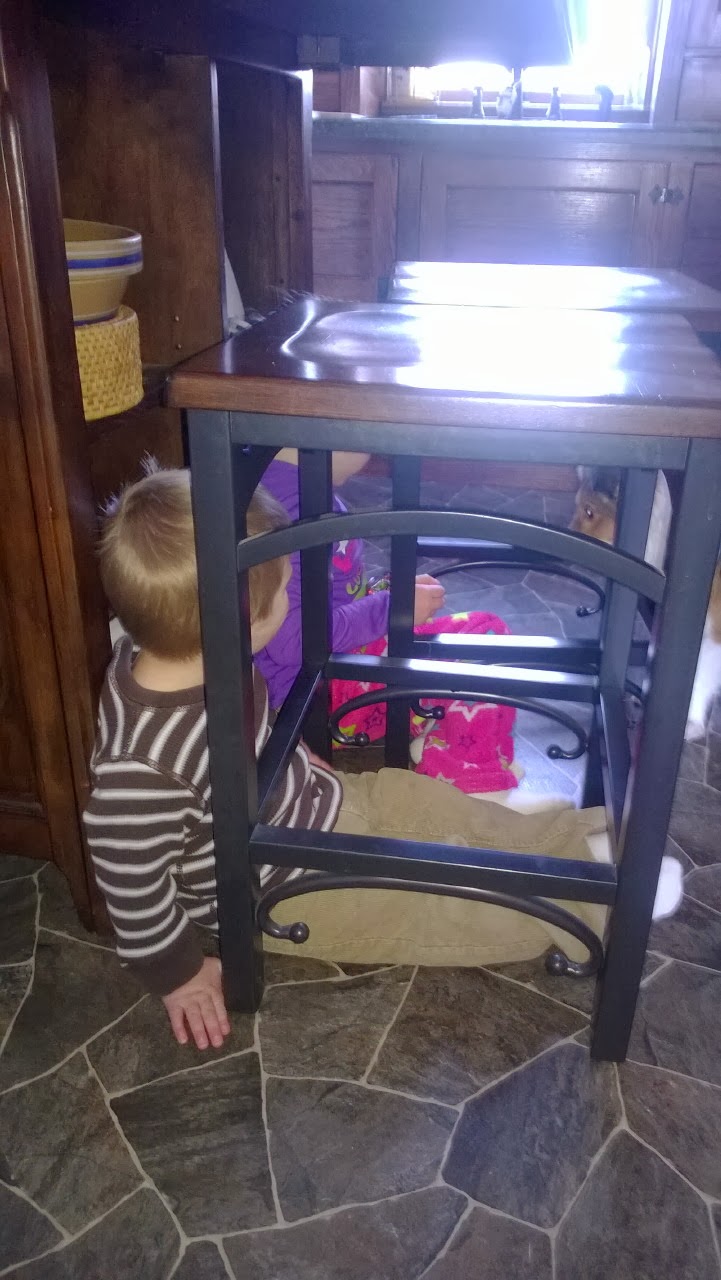 Where they got such an idea from, I don't know.

It was quite a task to load up their snow clothes things, their rolling suitcases, some snacks, the dog leashes, some water bottles, two car seats, two dogs and two kids into the car! Whew!  Good thing I had Steve to help me!!!  When my girls were little, I had to always organize and do all that myself to get out the door... and their father would stand there looking at his watch and wondering why we could never get out the door on time.... (HIS time that is)   I sure appreciate Steve and all the effort and help and consideration to get us moving and out the door!   Ahhhhhhh

We got everything in the car, and set little Finnegan on the back seat between the two kids.  Normally we would use a dog crate to transport the dogs, but we were a bit crammed for room. 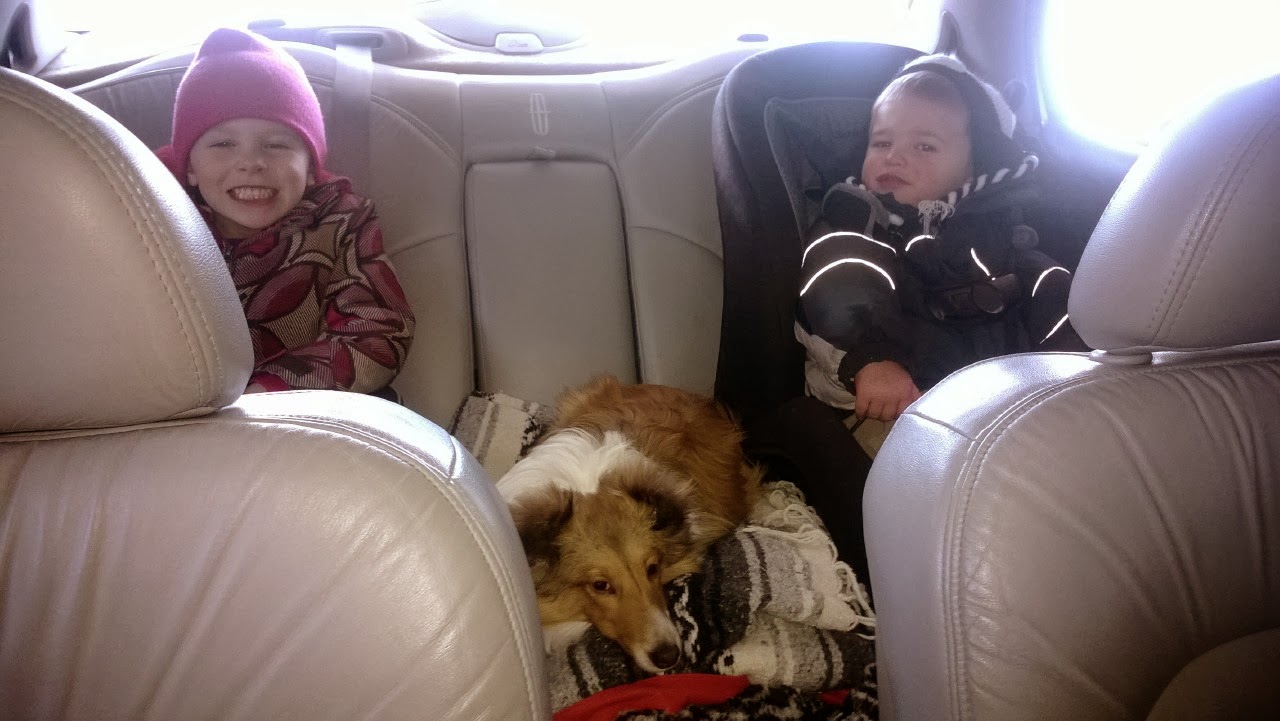 Poor Duke was curled up on the floor between my feet on the passenger side up front! 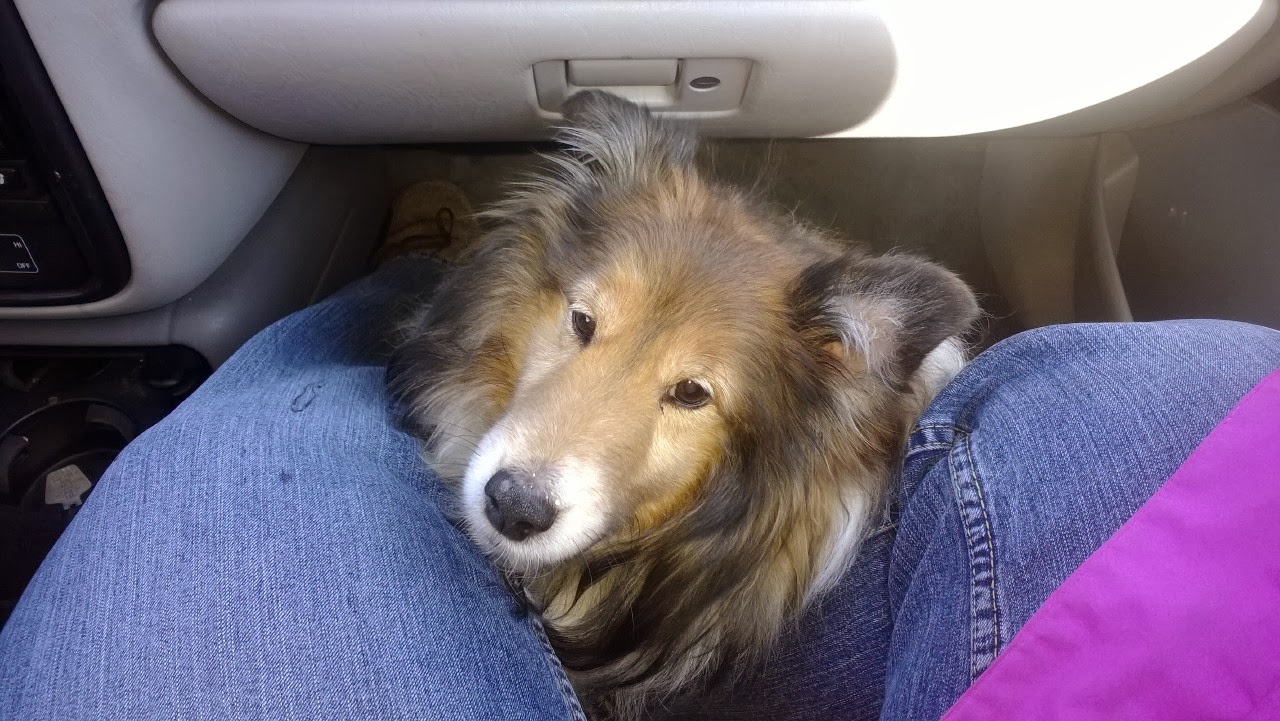 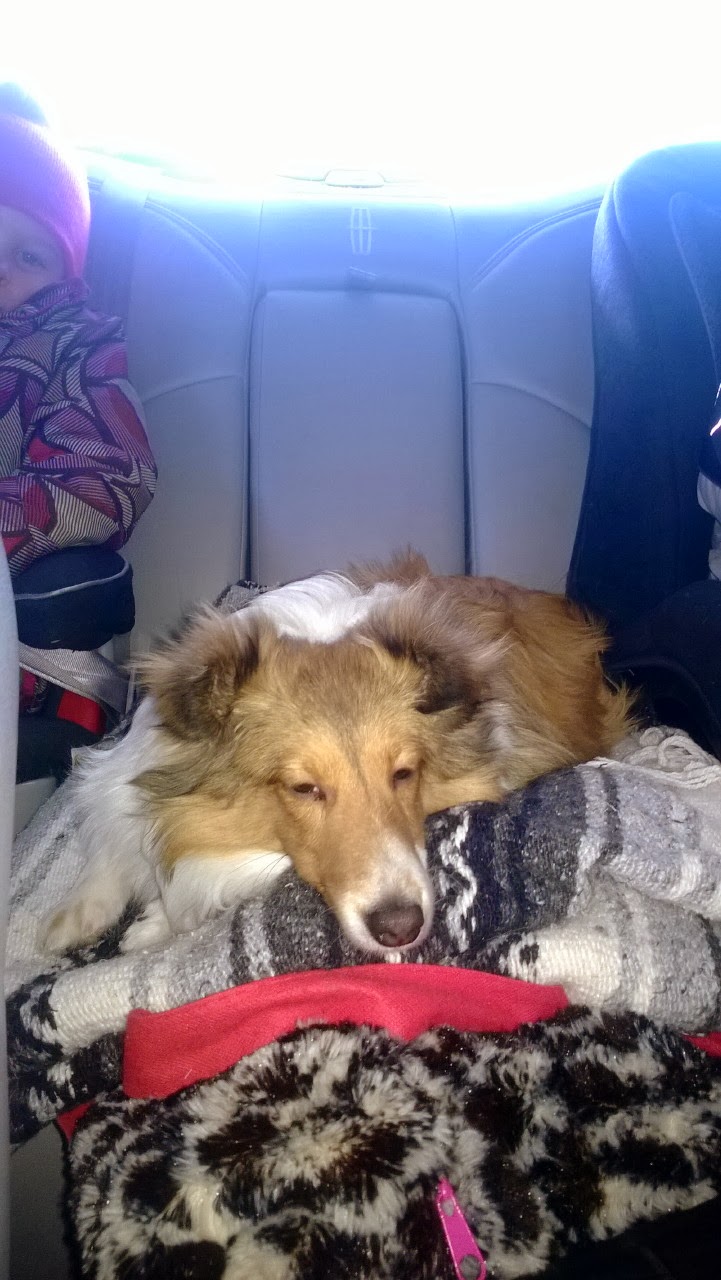 Wonder of wonders, the kiddos and doggers slept ALL THE WAY!!!

We had such a nice quiet drive....


Erin and Mark bought this place on 80 acres of prime hunting land up in the Northwoods of Wisconsin.  This is the first time the grandtots got to see their new cabin!

The dogs enjoyed checking things out too, and wandered the path out back to the shed (no it's not an outhouse... the cabin has running water and a full bathroom inside)  ....  a few bites of snow to make them feel right at home for a bit. 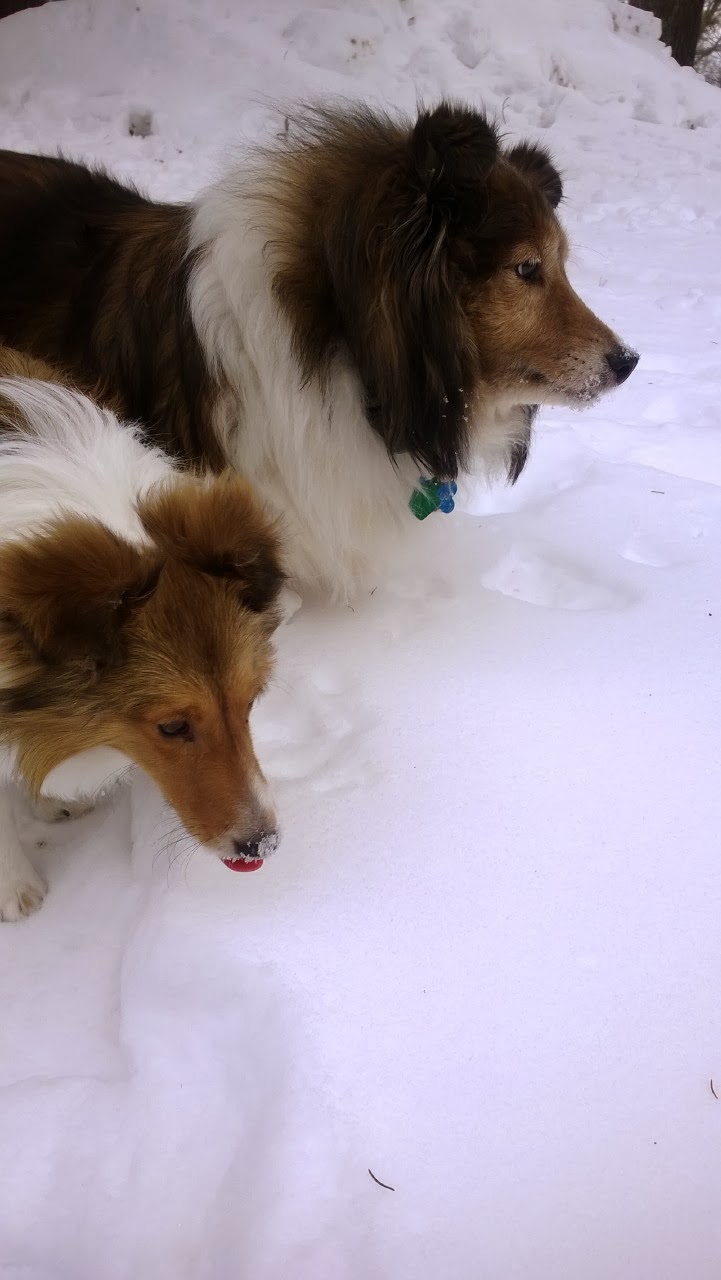 After a bunch of jaw jacking about all of their exciting plans and ideas, we were ready to head on home.  We transferred all of the grandtots' gear into their parents' vehicle and we had to back our car out down the two tracks of packed snow that made up the driveway.  Well... the soft powder sucked the tires in on one side and off we went .... oops!

We tried and tried to get out, but the soft powder snow was just not packing enough to get a grip, especially going backwards!  Mark pulled out some of the carpeting sections they had ripped out of a bedroom in the cabin. The guys put the carpeting under the tires.... while I drove backwards and they pushed.  YAYYYY  It worked!!!  Wheeee we were FREE!

We drove off, thinking all would be fine.  Hmmmmm we drove to Green Bay pulled into our other daughter Heather's parkinglot at their apartment building to drop off Jameson's valentine's present. The car seemed to not quite shift into reverse.  Hmmmm?   But we were on a kind of a slope, so it really rolled backwards enough to stop, shift it into drive and leave their parkinglot.  We didn't think too much of it.

Next stop was our son Dan's driveway to drop of Allegra and Mason's valentine's presents.  As we got back into the car and tried reverse... RUT ROH.... no reverse!  Steve checked our tranny fluid, all was fine and up to level and not burnt or smelling.

So our son Dan helped Steve push the car out his driveway while I guided the wheel and we rolled into the street.  Once we put it in drive, it was fine .... and we got home safe and sound.  But it looks like either we knocked off a vacuum line (we hope) or blew an electronic module (second case hope)  or ruined our transmission (LAST hope!)  It was cold and dark by the time we got to Chilton, so there wasn't much of anything Steve could do in our own garage with no hoist. We couldn't pull into the garage anyhow, because we wouldn't be able to back out again!

We were able to pull into our yard, we made a wide arc and aimed the car nose out facing the drive towards the street for tomorrow.  We will call in the morning to see where is the best place to go here in Chilton that I can drive it to and either walk home or hopefully hitch a ride if I can.  The wind chills tonight will be 35 below zero. brrrrrrr hope it warms up a little tomorrow, a forecasted high of 5 above, but I am sure that won't be till in the afternoon.

Sigh... I hope this doesn't put too big of a dent in our vacation budget.  We are due to head out on Friday or Saturday, depending on the weather.

Posted by KarenInTheWoods at 10:31 PM