Before and After Foyer

Okay... back to some "Before" and "After" pics again....  In the last couple of blogs, we covered the outside of the house and the enclosed front porch, so let's step inside to the foyer!   (or foi-yay as Linda insists!)

We were quite impressed with the foyer as it was when we moved in.  All of the beautiful woodwork was left in original condition.  The southern facing leaded glass window shows rainbows all over the foyer, which move across the walls as the day progresses.  The grandtots "capture" the rainbows with their hands. 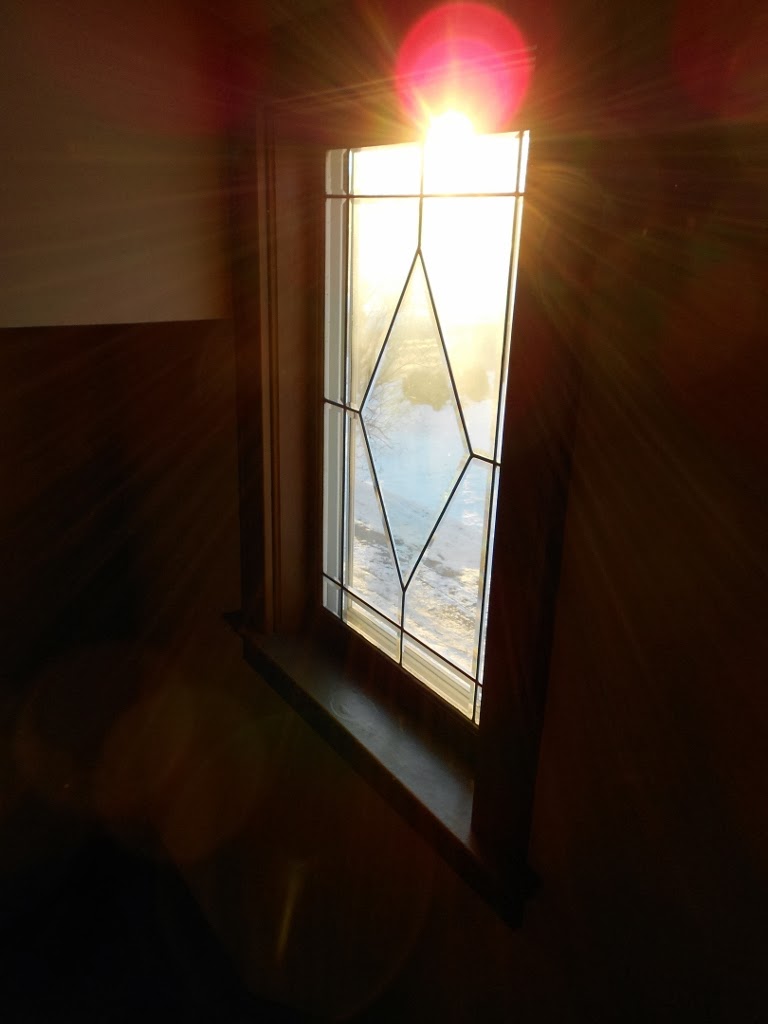 The woodwork is so nice, with mission style banisters and individual panels of wood set into a neat pattern under the staircase.  The wood glows a lovely golden reddish with brighter gold grain when the sun lights up the room. 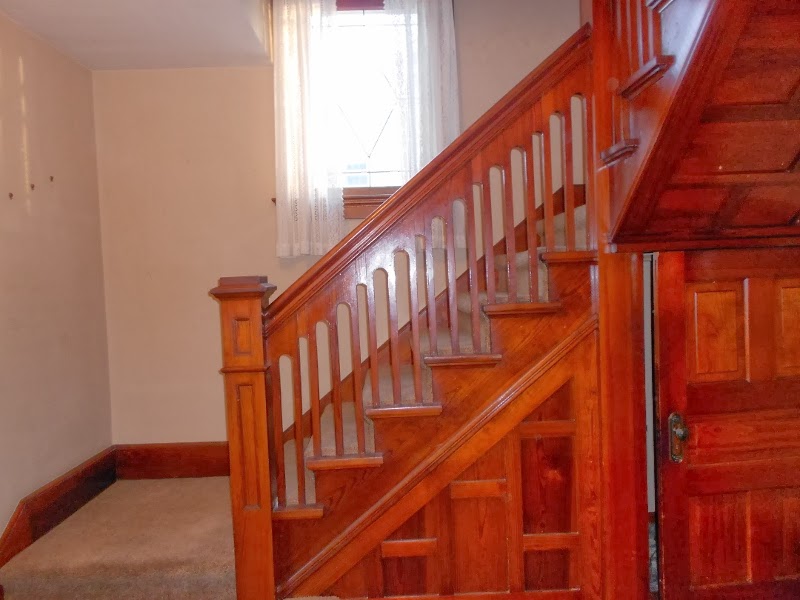 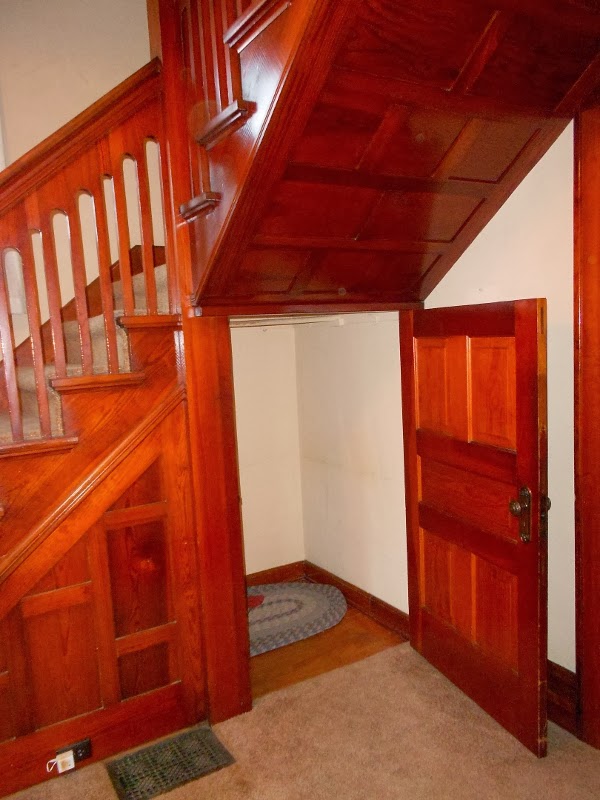 The "Munchkin closet" under the stairs is for all the grandtot toys~!

Let me tell a little story.  Almost 30 years ago I rented the downstairs of an older two family home about the same vintage as our house now.  On the main floor was a twist type doorbell that could be heard up the stairwell to the upper unit.  Every time we came in the downstairs doorway, I had to restrain little Erin from giving that bell a good twist, or else the little old lady who rented the upstairs would rush down thinking someone was at the door was for her!  When the knob is twisted on the outside, it makes a very loud satisfying BRRIINNNGGG similar to a bicycle bell but with more "oomph".  It was sooo hard for a little 2 year old girl to resist twisting that knob!  But even for me, I always thought that was a cool doorbell!

Fast forward now 30 years to this house.  When we moved in here, we noticed that in the front door jamb there was an old hole that ran from the outside in the porch through the woodwork to inside the foyer. You could see two little screw holes under the layers of paint on the outside jamb to know that is where the knob was mounted.  And on the inside jamb, the woodwork had a circle shape around the hole was very telling that at one time a bell had been there.   The three grown daughters who sold us the house never remembered a bell being there, so it had been gone a long time, at least 50+ years since the bell had been in that place.

I started looking for one on antique hardware sites and also Ebay and Amazon. Whew they were very expensive--- Finally I found a new reproduction in my price range!   Oooh it was pretty!  But... the shaft was only long enough to go through the thickness of a door, not through the width of the entire door jamb!   But my Steveio said he could fix that!  I went ahead and ordered it, and it arrived in perfect condition.  Then Steveio bought a longer section of square stock metal rod and welded an extension onto the original shaft.  Voila..... 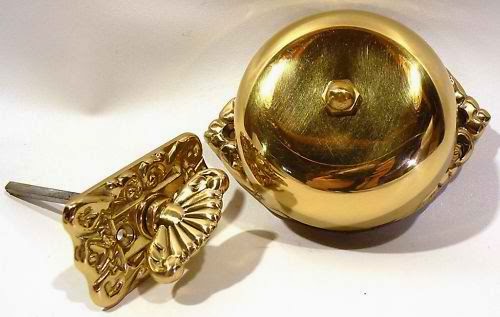 I was so happy to screw the knob into place, set the bell on the shaft and screw the back plate onto the inside jamb. And one good twist made it go BRRRRIIIINNNGGGGG!!!! OH my what a sweet sound! 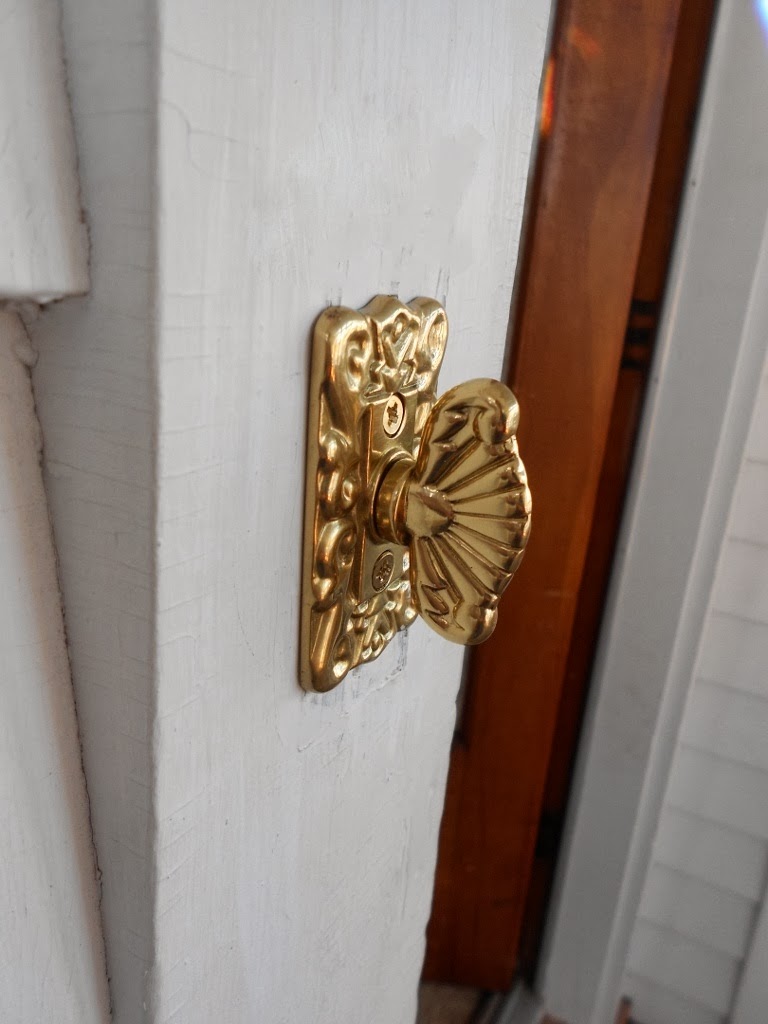 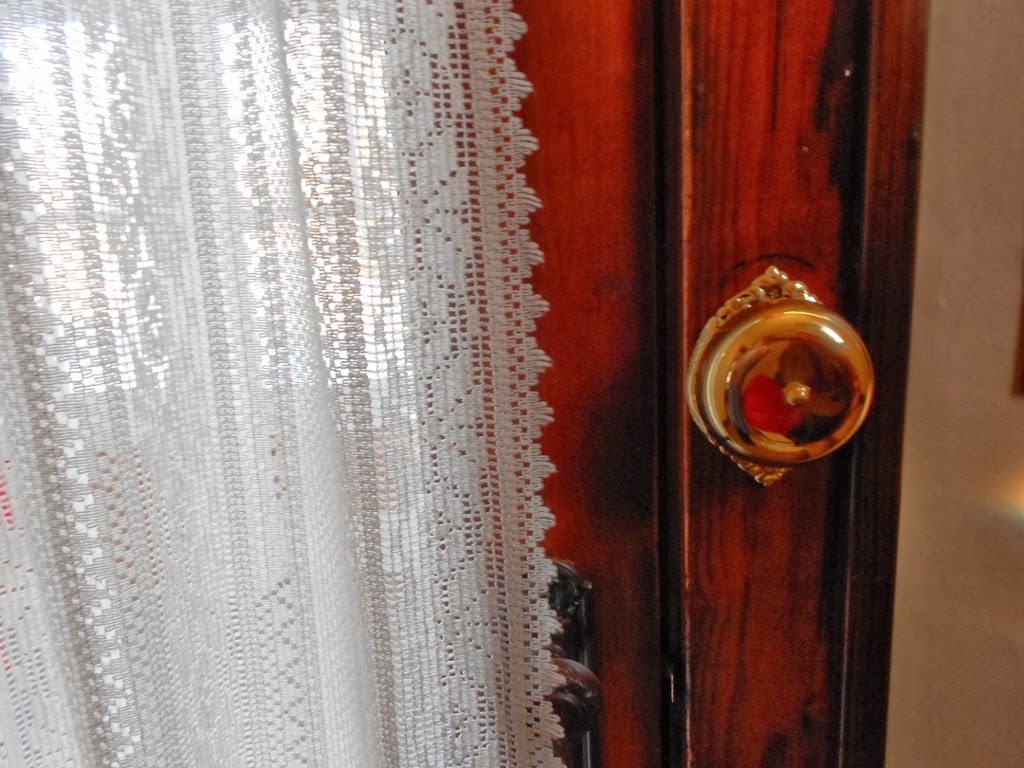 And here we are now, 30 years later, with our darling little Erin's daughter, Chelsea...
hmmm  she just "can't resist" twisting that door bell! 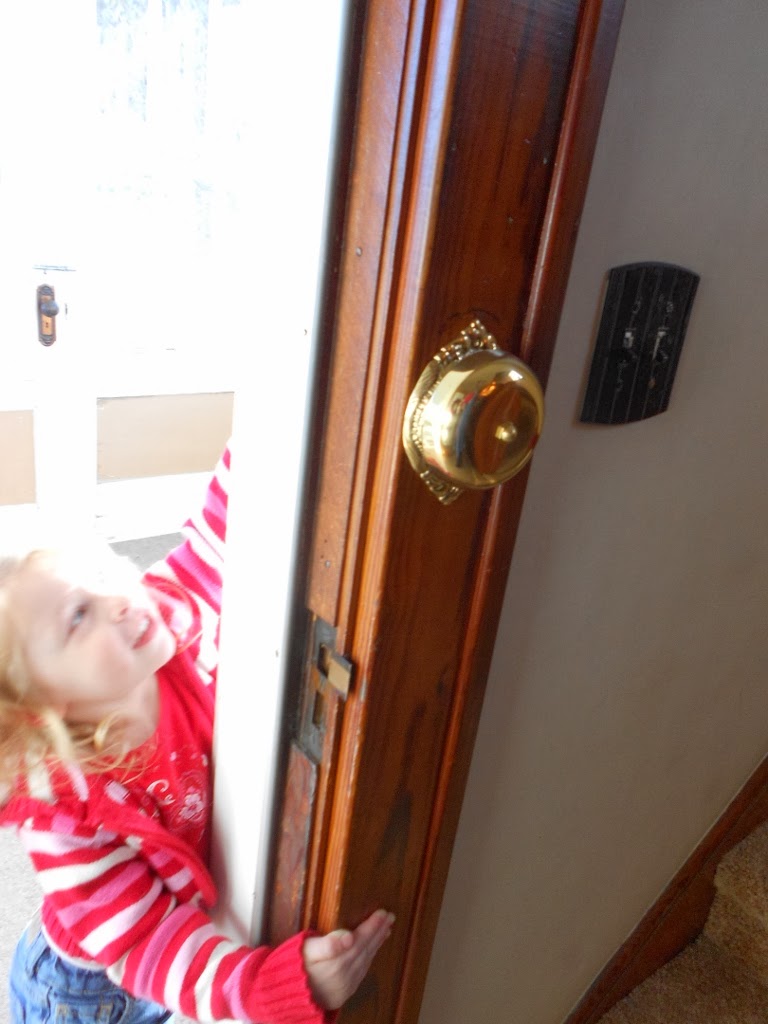 Wonder where she gets that from?

We didn't need to do much to the foyer.  It does need a coat of paint in the future, but I haven't gotten that far yet. Steve wired up a lovely crystal light fixture for the middle of the ceiling.   I never did take a pic of the light fixture once it was up, but here it is on the website where we bought it from.  It has all little chains of crystals gathered to the center and then teardrop dangling crystals that I had to hang all around on the rim once the fixture was up. 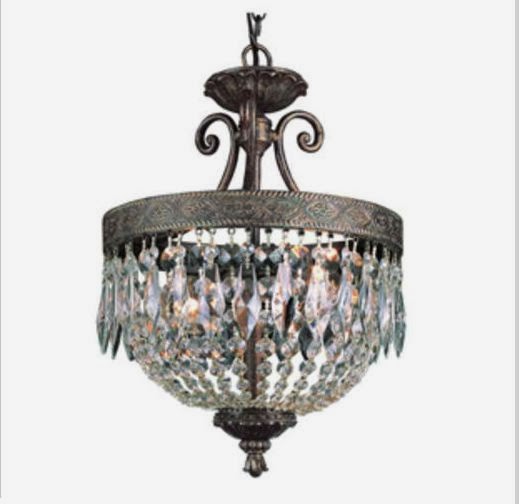 I was given an original oil painting by my artist friend Rosie DuPuy of Bethel, MO.  to hang on the bottom turn of the staircase.  She literally took it right off the wall in her house and gave it to me last spring!  She is a talented artist and does such nice work!  Each morning I say "Hi Rosie" as I walk past it.   Also I picked up a fantastic all wool oriental rug at an art gallery closeout sale that fit the foyer perfectly! 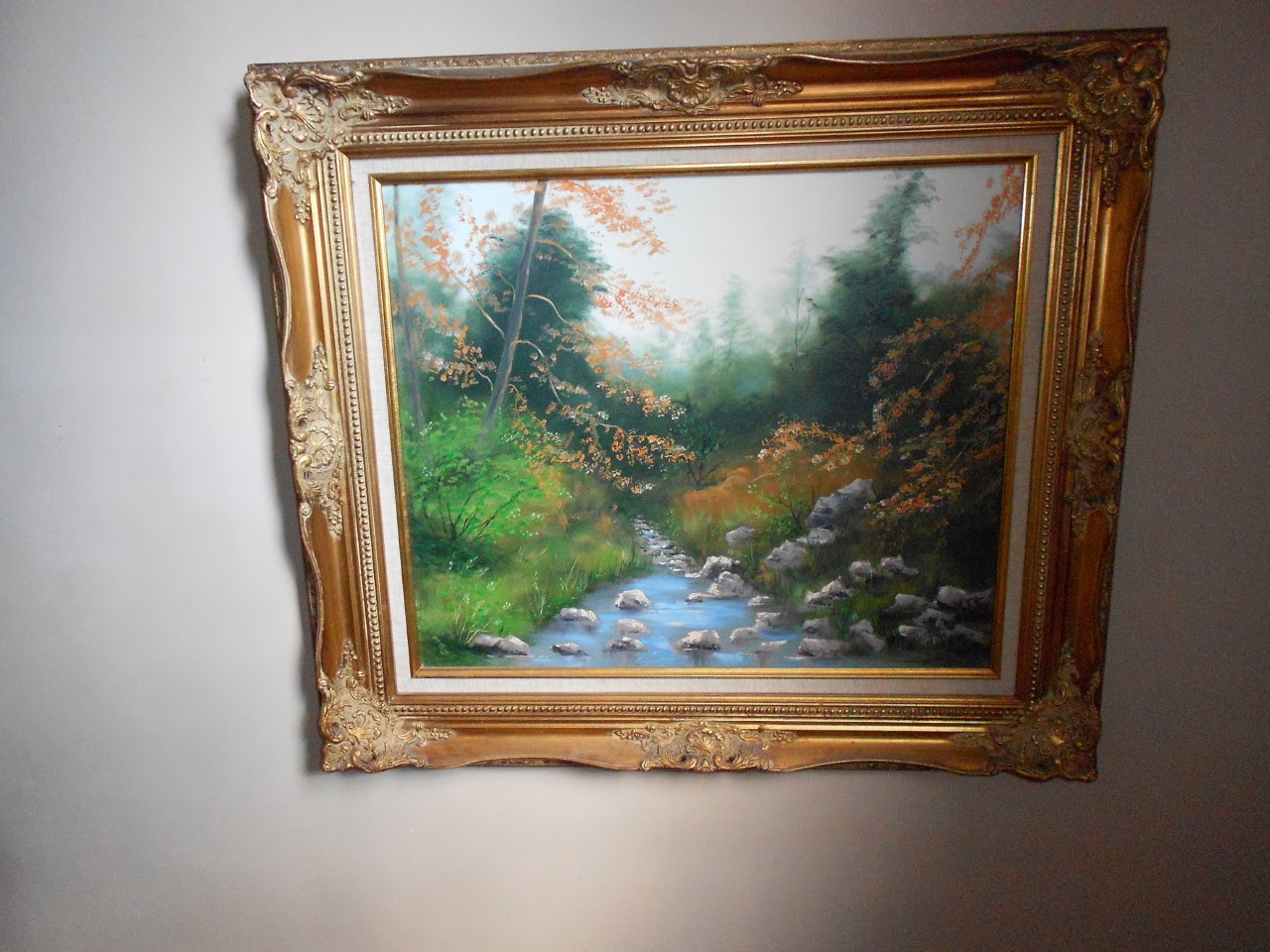 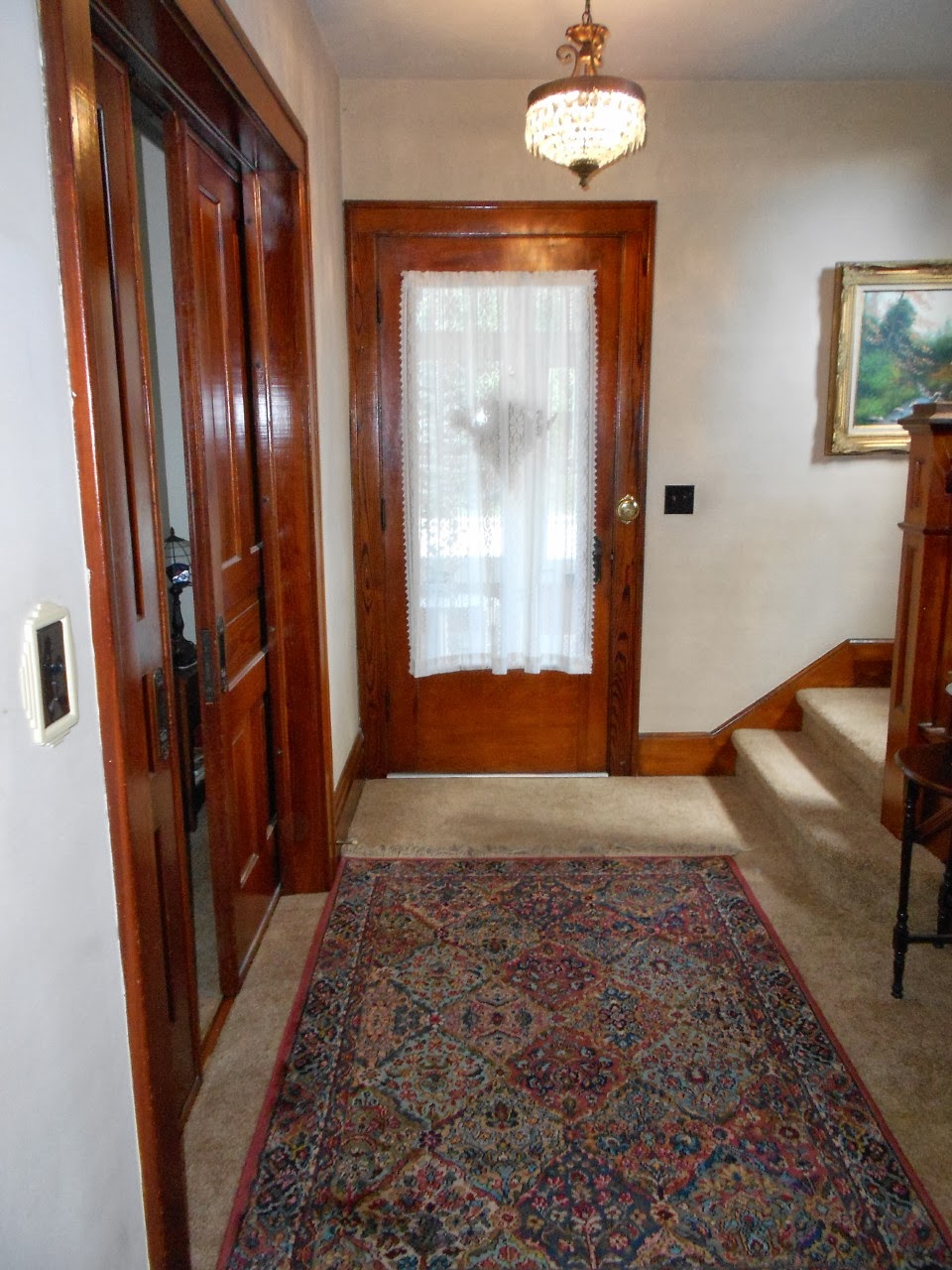 Back when we looked at the house in Oct 2012, there was a beat up old weathered three legged table laying under the back steps.  I took it out and set it in the garage, hoping the sellers would leave it behind after the closing.  (they did)  so I refinished it and added new stain and poly... ahhhh it was perfect for the foyer! 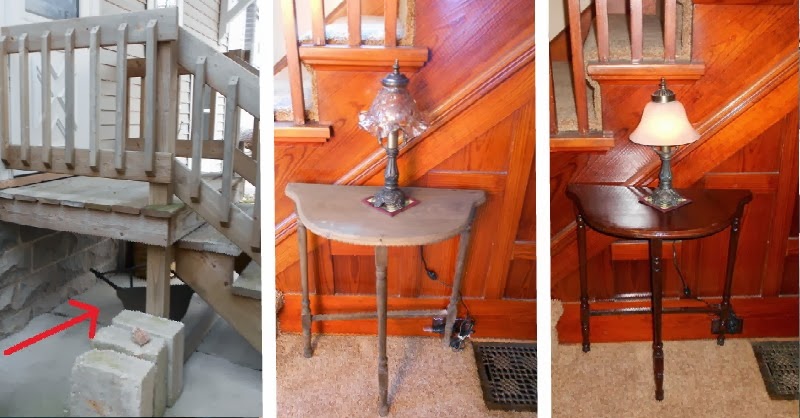 Steve's father had given us a mission clock that he had refinished years ago, probably in the 1970's Steve thinks.  It has been painted GREEN by someone!  ACK!   So he stripped it and stained it like dark walnut brown.  The wood was pretty, but didn't match our woodwork, so I gave it a coat of colored polyurethane called Polyshades by Minwax.  Also Steve's dad had removed the four wooden pieces underneath the clock, as they were not to his taste.  I googled images of the clock and found out what it could look like if Steve cut me some more oak pieces.  Of course he did, and I restored the clock to it's original configuration.    I used my fabric cutting board to line them up perfectly square.  We hung it up on the wall, hung the pendulum back on, wound up both shaft holes with the key, one for the ticking and one for the BONGING on the hour! 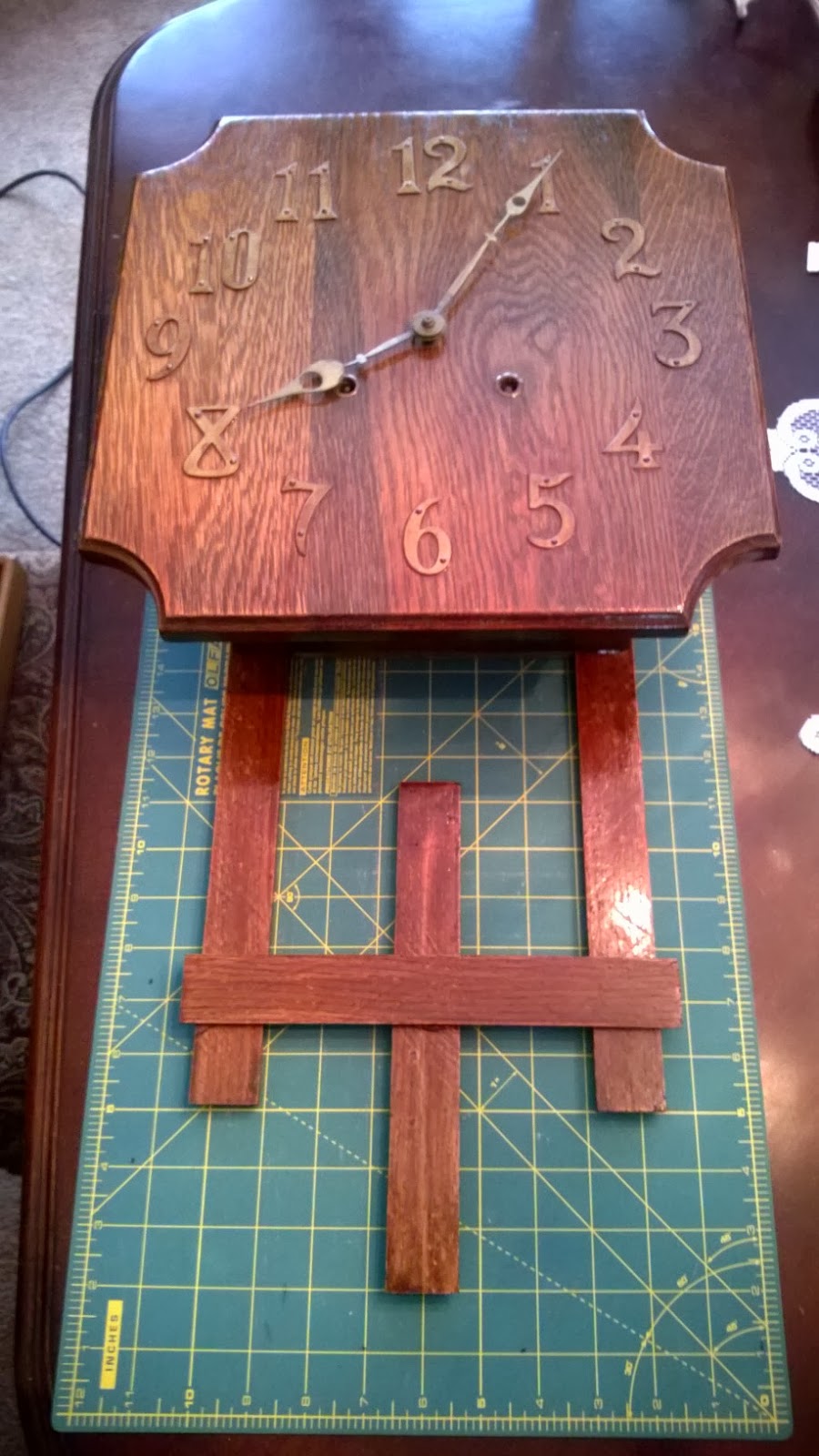 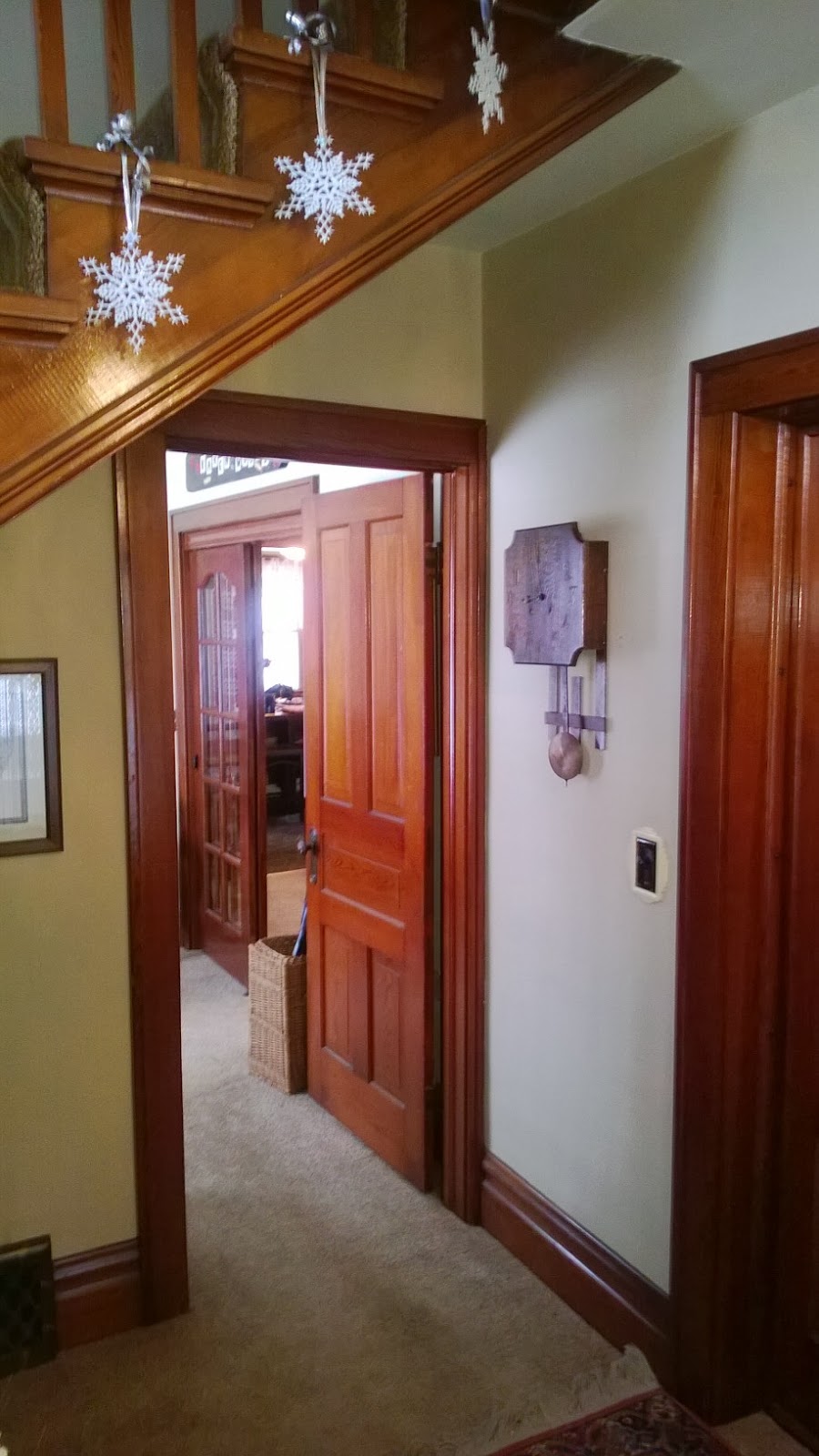 Amazing with a little research, the clock was made in the 1910-1920 range, which dates it to about the same time as our house was built. Look at the ugly green color that it had been painted before! 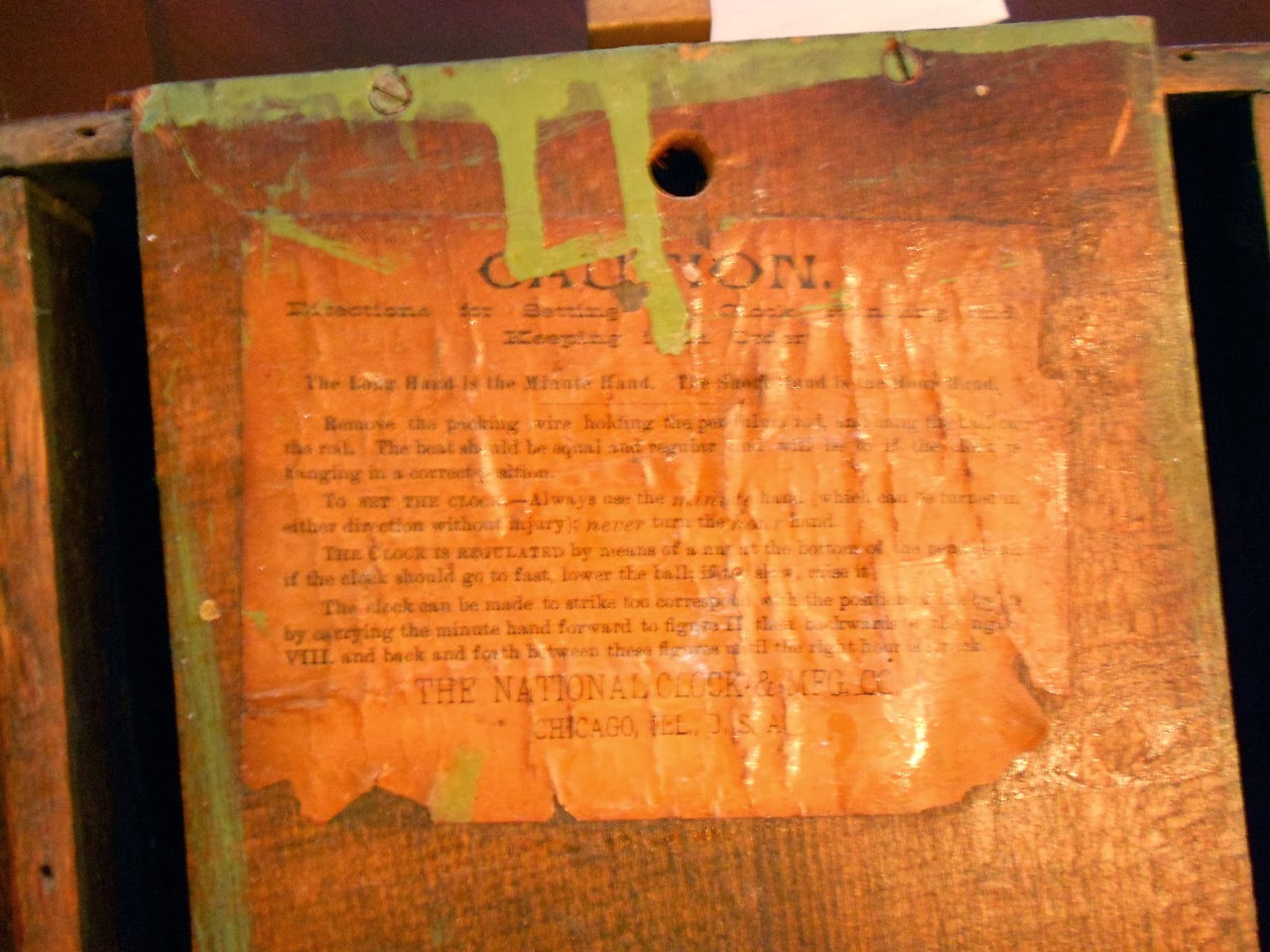 The grandtots are transfixed by the movement back and forth of the shiny bronze disk of the pendulum, swinging tantilizingly up there just out of reach.  Repeatedly they are told "don't touch"!   One day, right before it was time to leave, we knew little Chelsea (yes, the door bell ringer) had gone to get her coat from the closet.  Lo and behold, that happens to be JUST the exact time a little hand must have stopped that pendulum swinging!  Because when we came home later to put away our jackets, it had been stopped at the exact time that wee one had been all alone, unsupervised, in the front foyer!  LOL


The opposite wall of the foyer has the double pocket doors that lead into the livingroom.  The previous owners said their mom used to keep them in the open position, safely tucked into the walls so no little fingers got pinched.  We find that it helps with the heat bill to keep them closed, and also for sound if someone can't sleep and wants to watch tv in the livingroom (me) while the other one snores away upstairs undisturbed (Steveio)   I snapped this pic before the clock was put up yet. The clock is located on the wall between the pocket doors and the door leading into my Loom Room near that light switch. 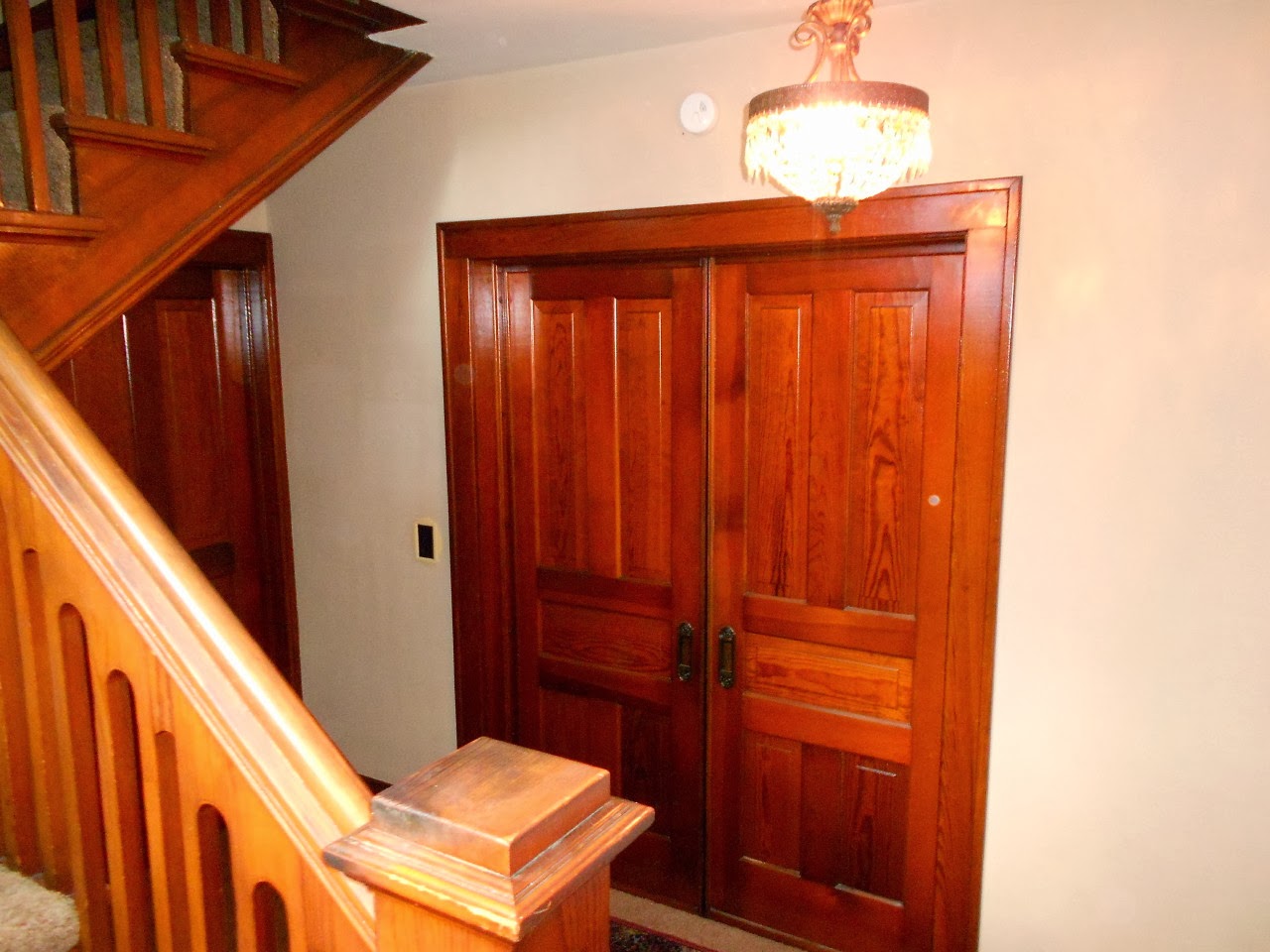 Look at the 100 years of wear on the banister post top.


Well, that is about it for our foyer.... here it is now in all it's glory!    I really like seeing the grandkids playing on the stairs at the first turn at the bottom landing.  They peek between the railings, or snuggle up with toys, or read books, or try to catch the rainbows. 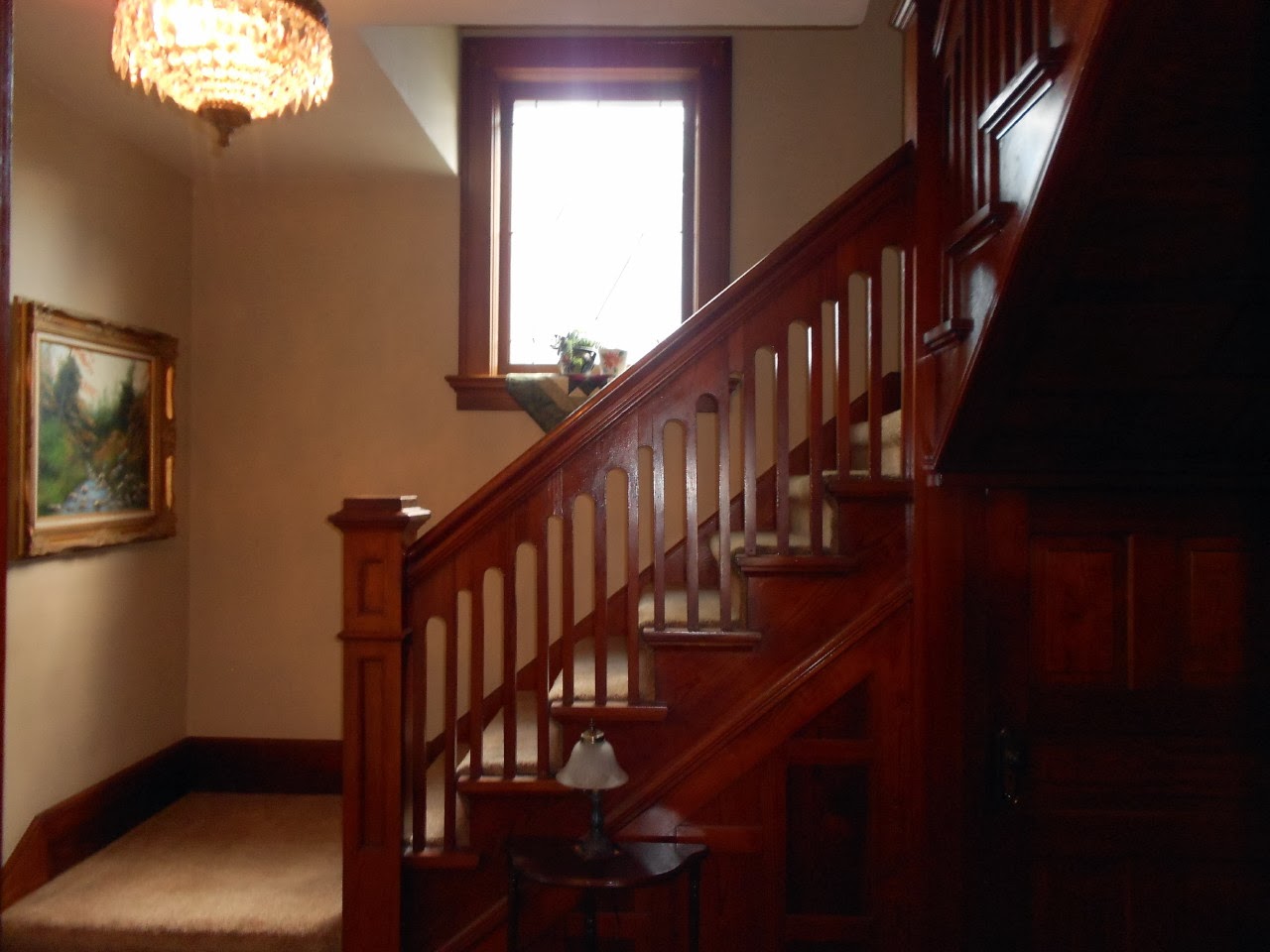 On the weather topic, we have one more night to suffer at about 20 below zero, but the weathermen are promising it to get up to 11 or 12 tomorrow, and from there back to normal winter weather for Wisconsin... whatever that is????


Wasn't it a bit cold there on the couch right in front of that big window? Good thing you had the fuzzy blanky and the doggers to keep you warm.
my answer: Actually that large front window looks out into the enclosed front porch, so there aren't any drafts there by the window.  Although the porch isn't heated, it is another layer of protection so the window is not cold.  But I will write another blog on the topic of windows, as it's a major bone of contention between Steveio and myself.  He wants new ones, I love the old ones.   So there!  LOL

Posted by KarenInTheWoods at 10:53 PM