Warming Up and more Before and Afters

First off, I want to say HAPPY BIRTHDAY to one of our grandtots.  Today little Chelsea turns FOUR!  Oh my... just seems like yesterday, yadda yadda yadda....    I think she is 4 going on 18!~ 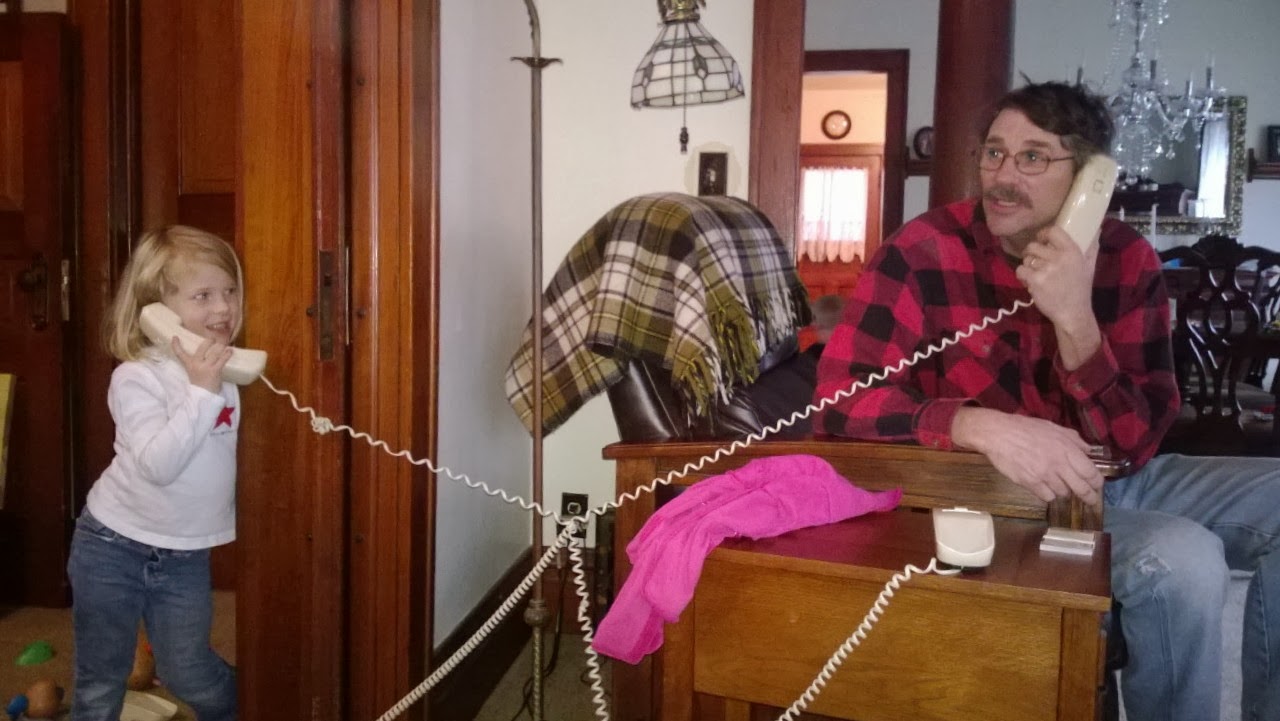 (dontcha love these old phones that were in the house when we bought it?)

Tomorrow is her birthday party up in Oconto, so I will post more about that tomorrow or Sunday.  We will be seeing all FIVE of the grandtots at the party, so it will be a delightful day.

Wheeeeheeeee it's 6:30 a.m. and the temp is already TWENTY FIVE outside!  Now, to a lot of you that sounds cold, but to us who have been suffering at 25 below, this is a HEAT WAVE!!!!   The dogs zoomed out and back in from potty break this morning without needing to wear their socks.  The road out front is damp from melting snow (the salt that had been spread is now working).  The furnace has actually kicked off and on instead of running steadily.

We got our heat bill for the last 33 days... it's 80 dollars more than normal, but that is because we had overridden the automatic thermostat that turns it down to 56 overnight.  During this cold snap, we didn't want to risk frozen pipes anywhere so we left it set up in the higher 60's overnight.  It actually gets too hot up in our bedroom when the furnace is on all night.  We have been sleeping with the door shut, so the wee pup doesn't happen to wander at night.  The last few nights, we have been putting a baby gate across the open doorway instead.   So far the pup has not strayed from his bed mat all night, but there can always be a first time. A few more weeks of this, and we might not have to use the baby gate either.

On the puppy front, little Finnegan and Duke are becoming best buddies.  I was sewing in my Loom Room the other day and they were both laying behind my chair.  I turned around to see this: 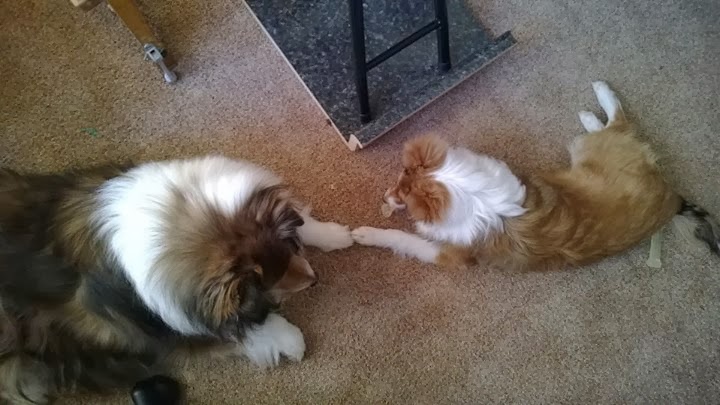 Duke taught little Finnegan about "fetch" and now he brings the ball back, most of the time.  He gets quite adept at rushing ahead of old Duke to get the ball first, but as he passes by to bring me the ball, Duke usually swipes it away from him to bring it to me.  It's become quite a game.


On the quilting front, I got 20 blocks done of the quilt I posted about the other day.  Now I have to get some contrast coordinating fabric to create sashing, or frames, around each block and put them all together.  It was so nice to spend a few days at my 100 year old Singer treadle machine, sewing in the sunshine and looking out over the frozen outdoors. 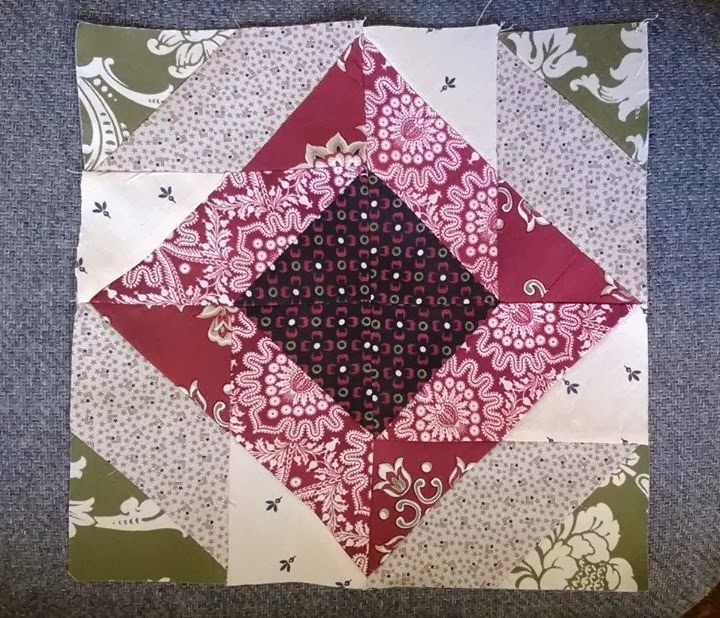 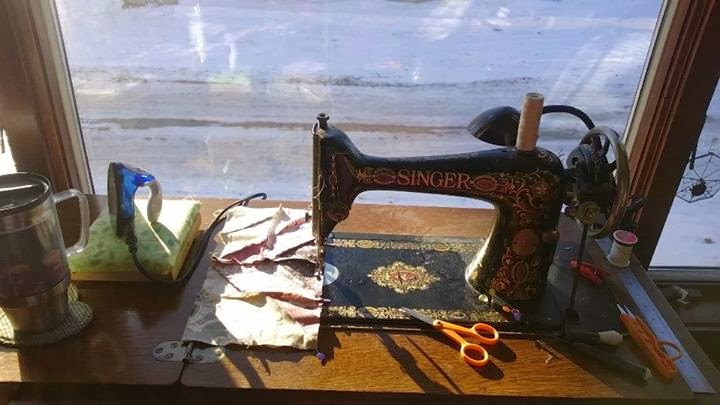 Let's see... some more "Before and After" pics.   The reason that I am doing these blog posts of room by room through the house is so I have something to blog about. Perhaps if we get to sneak out for a few weeks or more for vacation, I will have something really interesting to write about!~   In the meantime, I will do these from my files of "Our Old House"  LOL

The livingroom....  turning to the right from the foyer I wrote about yesterday, if you go through the double pocket doors, it leads to our livingroom.  When we first looked at the house, it included a big old console tv!  LOL   Also a "faux fireplace" which is built in to the wall, all cement and tile-  but it only has an electric log with a rotating tin foil flame reflector in it.  We bought a gas log fireplace to go in it's place, and will work on that next spring.   Steve will cut through the cement and run the direct vented gas log unit right out the back.  We will be able to keep the existing surrounding tiles and mantle.  Here is how the room was when we looked at the house. 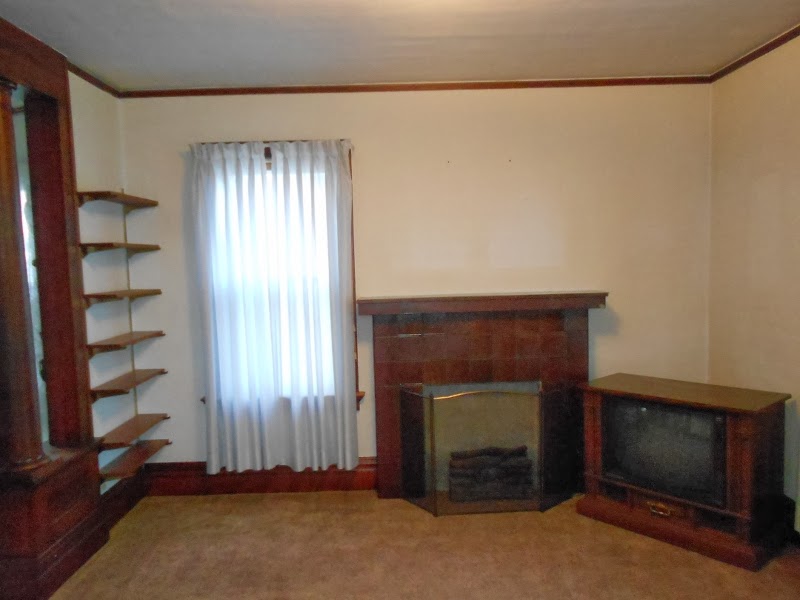 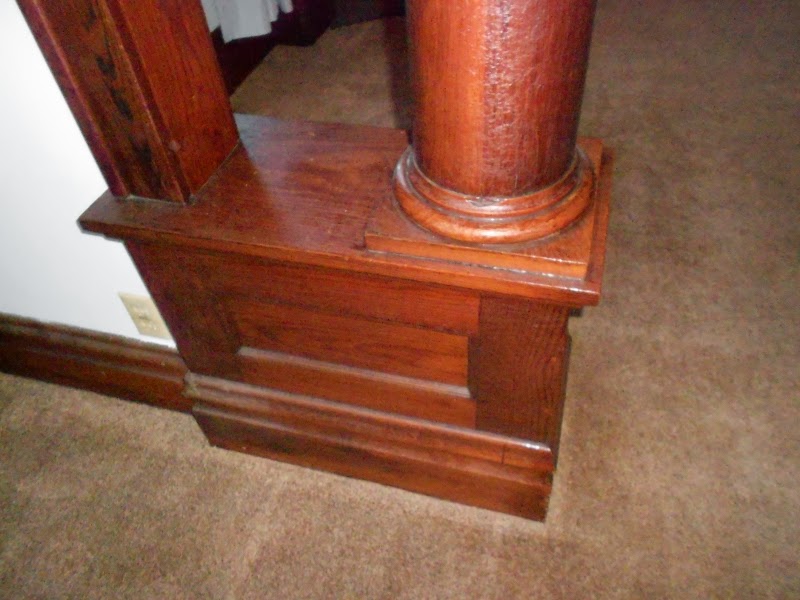 Once we closed on the house, we took down the curtains, and removed the shelves.  I put those up in my fiber storage room for inventory to get stacked on.

We hauled the tv over to the thrift shop, because it still worked and they said the old folks at the apartments in town have cable and this tv will work for them, even though it's analog.   Then we spread out the tarps and started to get to work!

The big window faces the east, and the room is separated from the diningroom by two large wooden columns and open doorway.  The window has beveled leaded glass across the top in an old fashioned pattern.  The morning sun comes in through the window through the enclosed front porch, and makes rainbows all over the livingroom carpeting.  I love all the woodwork... wide baseboards, lovely window trims, top crown moulding and two the crackly varnished columns on each side of the opening to the diningroom. 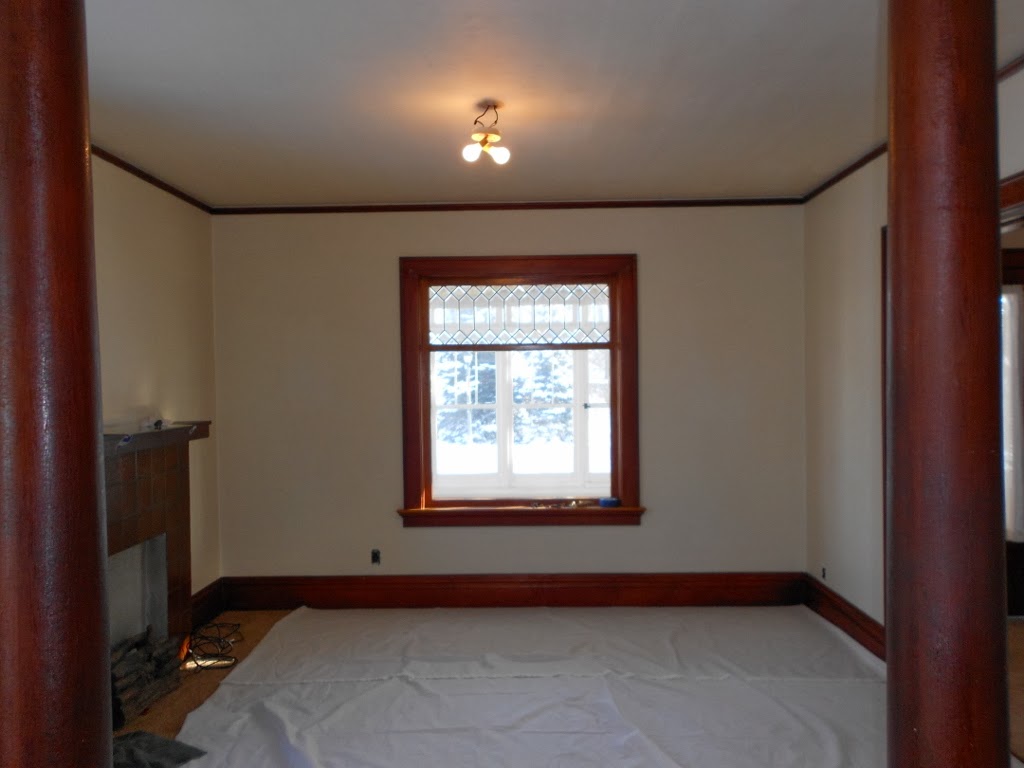 I painted the walls, (two coats) with a creamy antique white paint, and then for the ceiling we did something different in prep before painting.  The ceilings had slight ripples in the plaster for being 100 years old.  Steve didn't like looking at the ripples, even though I thought they were slight and not too noticeable.  There weren't any cracks or falling plaster, but Steve said if we don't take the time to skip trowel over them now, we will never move out all of the furniture and do it later.  So we hired two guys to come over and do all four rooms quick in one evening....   that is a lot of overhead work, and we didn't' feel up to it ourselves.  For $180 they came and did four rooms in just a couple hours.  Here it is wet, before it dried, and then I painted them white. It adds texture and hides the long corrugated ripples that seemed to bother Steve. 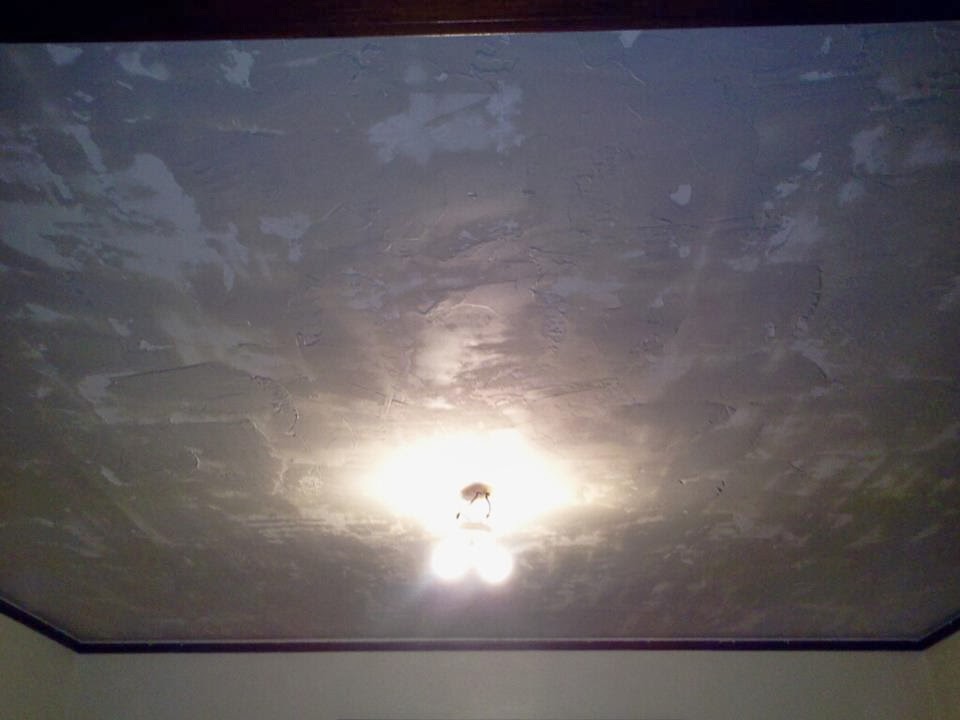 One of the daughters we bought the house from, Paula, said she had a mirror that I might like to buy that would work well over the fireplace.  So she brought it over one day and I was delighted to have it!   The frame was more brown than I wanted, so out came my handy dandy can of Polyshades (colored poly stain)  and I gave it a coat to make it closer to our woodwork.  We rotated it around to put the trimmed area at the top and hung it up over the fireplace.  Steve found this great leaded glass fireplace screen on Craigslist to complete the picture! 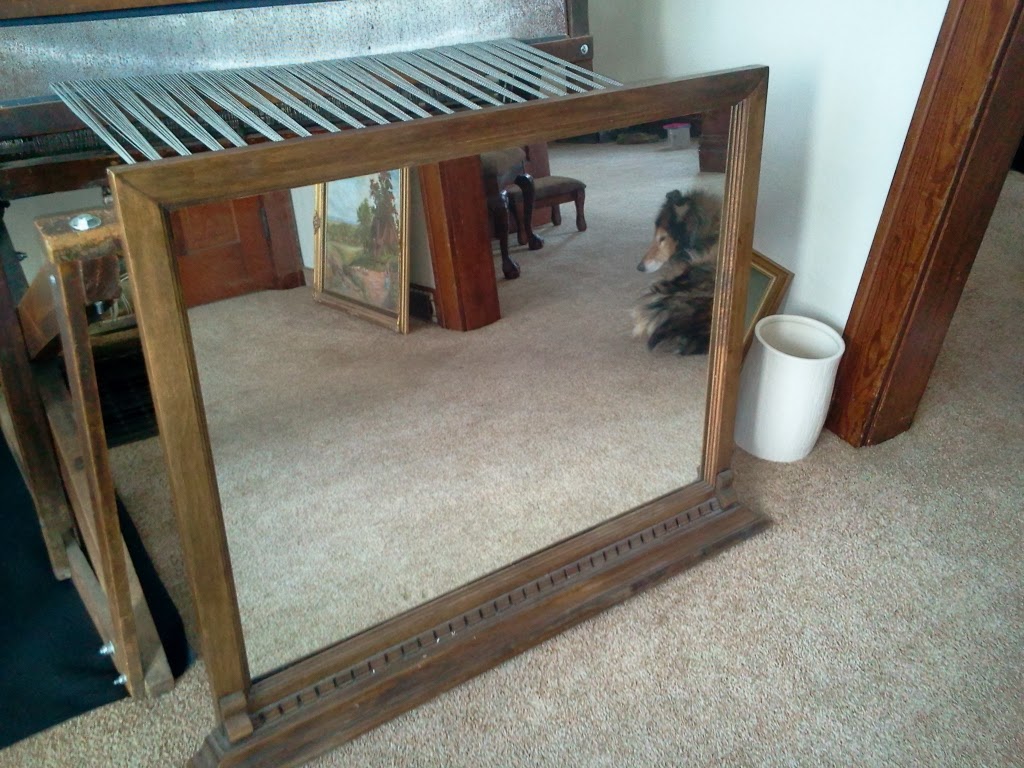 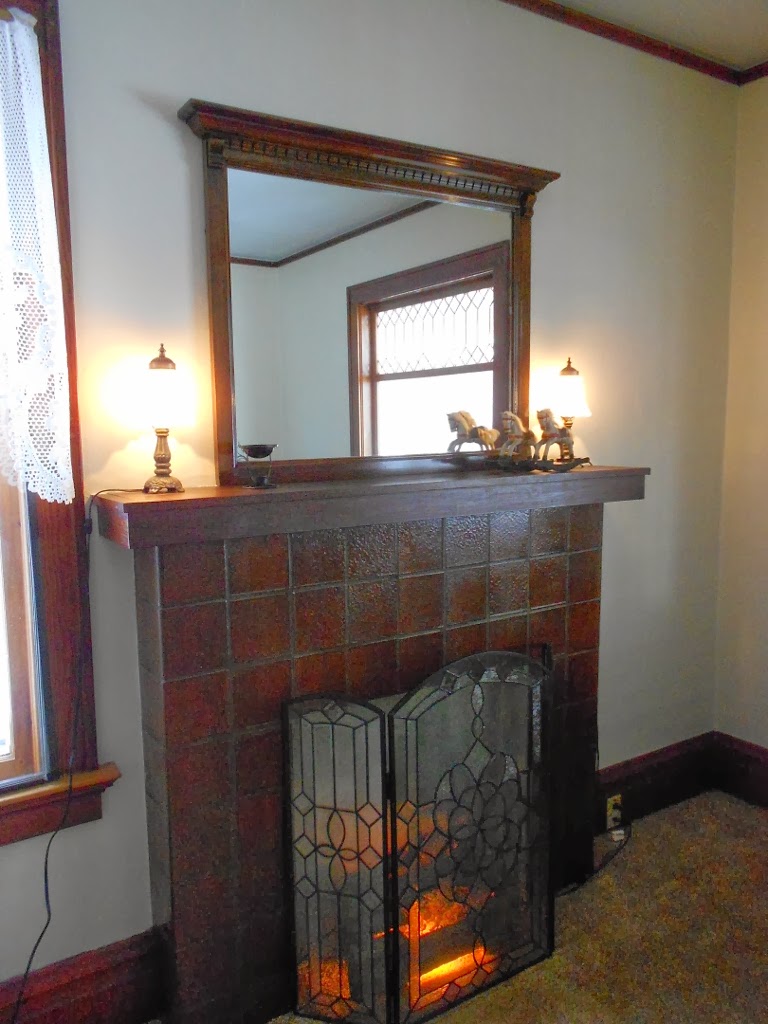 The livingroom isn't all that large, so we had to carefully choose what furniture we wanted to put in it.  While we were shopping around, Steve wanted a mission style recliner.   I liked the look of the chair, and it's very comfy with a reclining portion that comes out for the legs. 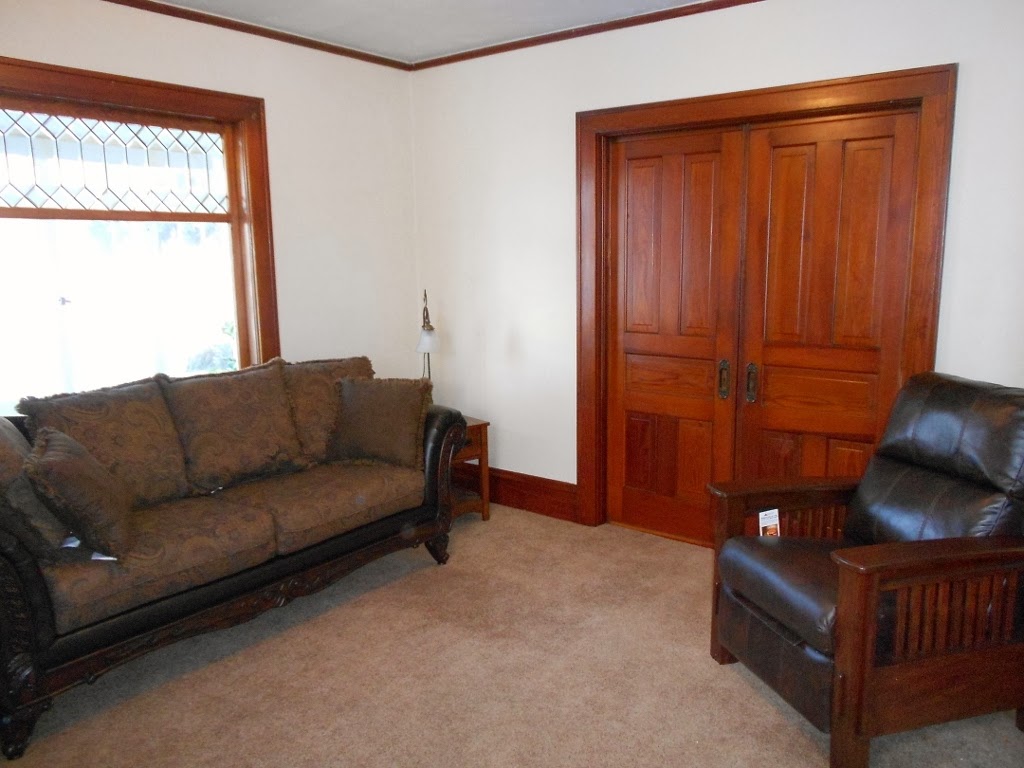 At that same store, I saw a couch on the clearance floor with a big gouge outta the woodwork frame along the bottom.... yes, I could fix that!  But it had a SOLD sign on it.  Dang!  It was perfect!  I asked the salesman that if the other person didn't come for it, could I be next in line?   The salesman then showed me a new one on the floor without a gouge, and it was on sale of a sale for not much more than the clearance priced one!   BINGO!   We bought it!   (and I didn't have to fix any gouges)

We decided to accent the room with some stained glass.   It started with my sewing some stained glass runners from a quilting kit I bought in the spring.  I made some runners to hang on the walls, and a few to set on the end tables. 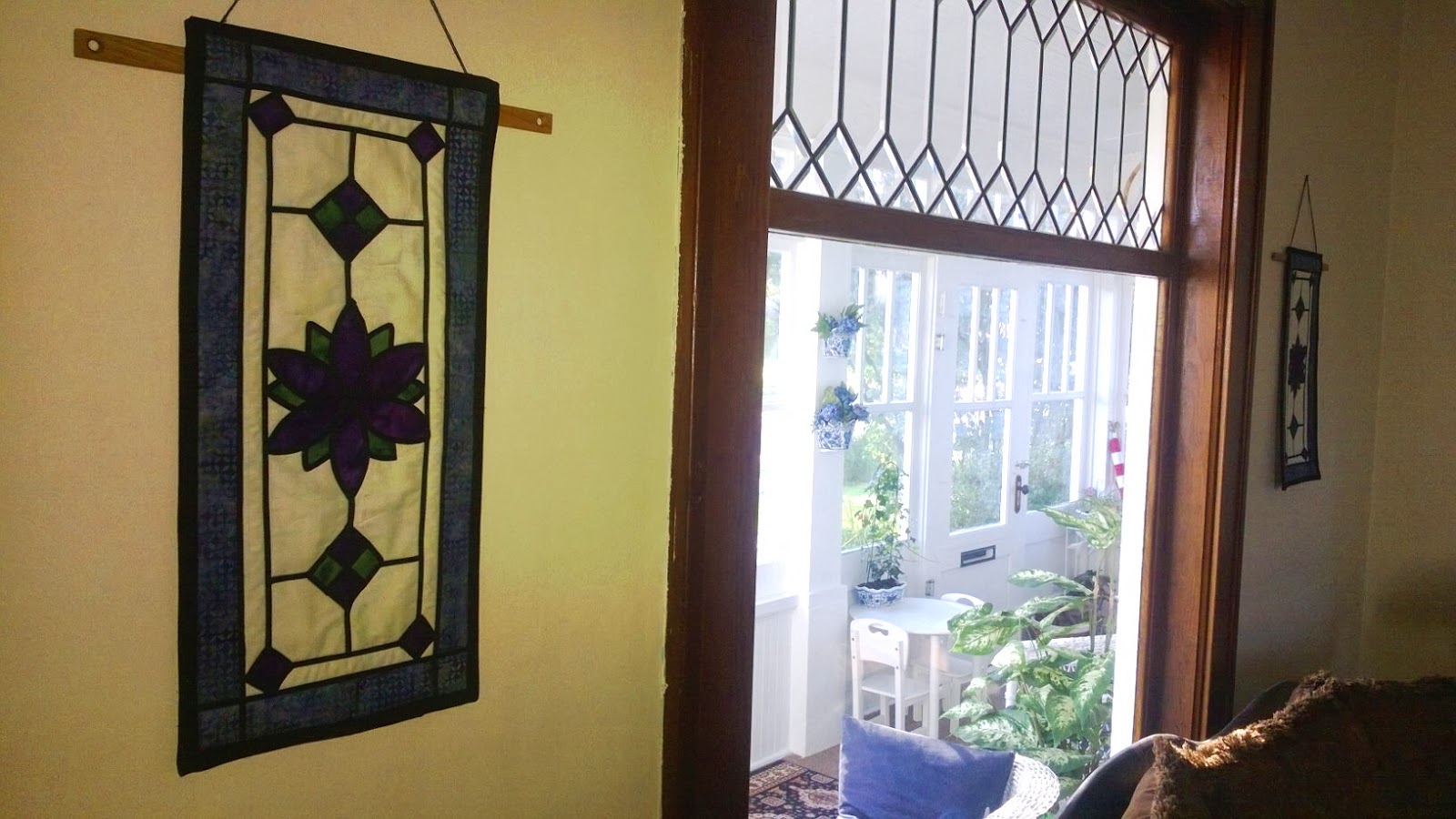 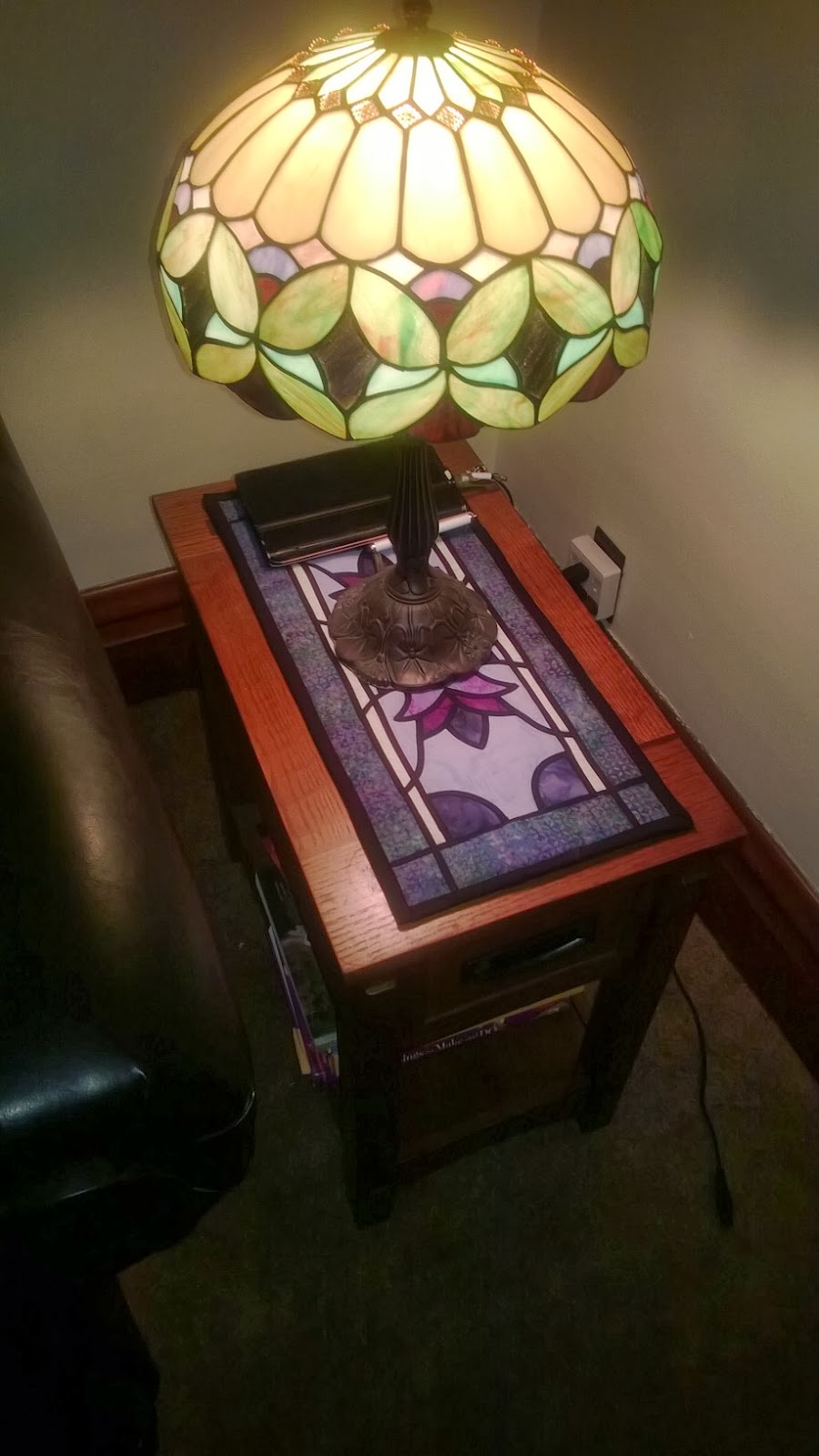 Then the grandtots broke the shade on the little lamp out on the foyer table, by accident.  I wanted to order three small 5" stained glass shades, two for some small lamps on the mantle and one for that little lamp in the foyer.

I found three replacement stained glass shades for the unbelievable price of $7.99 each on the Menards website. I thought they were small, but the description of the model number of the light fixture they were to go on didn't match up right. It said they were 13" not 5"????   But I ordered them anyhow.  They were only $7.99 each so it was worth taking a chance.  Perhaps they were plastic?  I had no idea.

When the boxes came... they WERE the large ones!   And they were all leaded stained glass!   Hmmmmm   The light fixture they were said to replace was normally $99, so perhaps these replacement shades were supposed to be $79.99 instead of $7.99?   I think it was a mistake on their web site, because the smallest replacement ones were $38 and these were the large ones????

I called the store to tell them, they didn't seem to care, and I was told I would be charged a 25% restocking charge if I returned these, even if I did order the smaller ones (at $38 each)   Well, for $7.99 each, why should I pay $2 each to return them? I will just keep all three of them and change my idea of  having two small stained glass lamps on the mantle.

Instead of putting any small lamps on the mantle, I put two of the shades on two larger lamp bases for each side of the couch on the endtables....    and Steve then came up with the idea of putting the third one up on the ceiling fan! What a great place~! 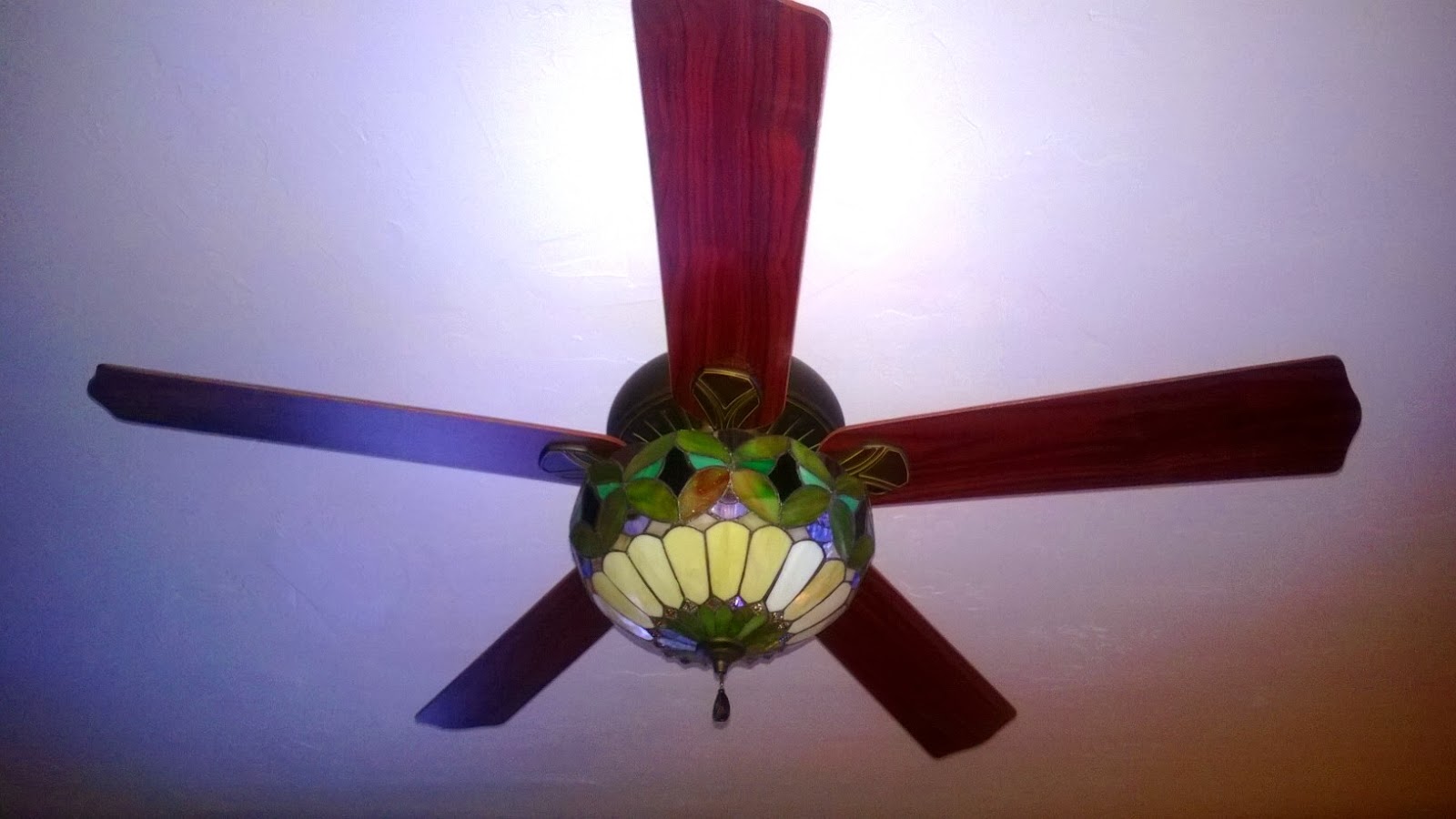 We had looked at a stained glass Hunter ceiling fan in the $300 range.  Whew... we couldn't afford that.  Now we have something similar for the bargain price of $59 sale fan and a $7.99 shade! LOL

Our livingroom has become just about a finished room now, with everything set where we want it. We added a little ottoman with a storage center that holds an even smaller ottoman. I use that for my laptop computer, and the lid of the big ottoman flips over for a table surface as our "coffee table".  Since the room is sorta small (12x13) we didn't want to overfill it. 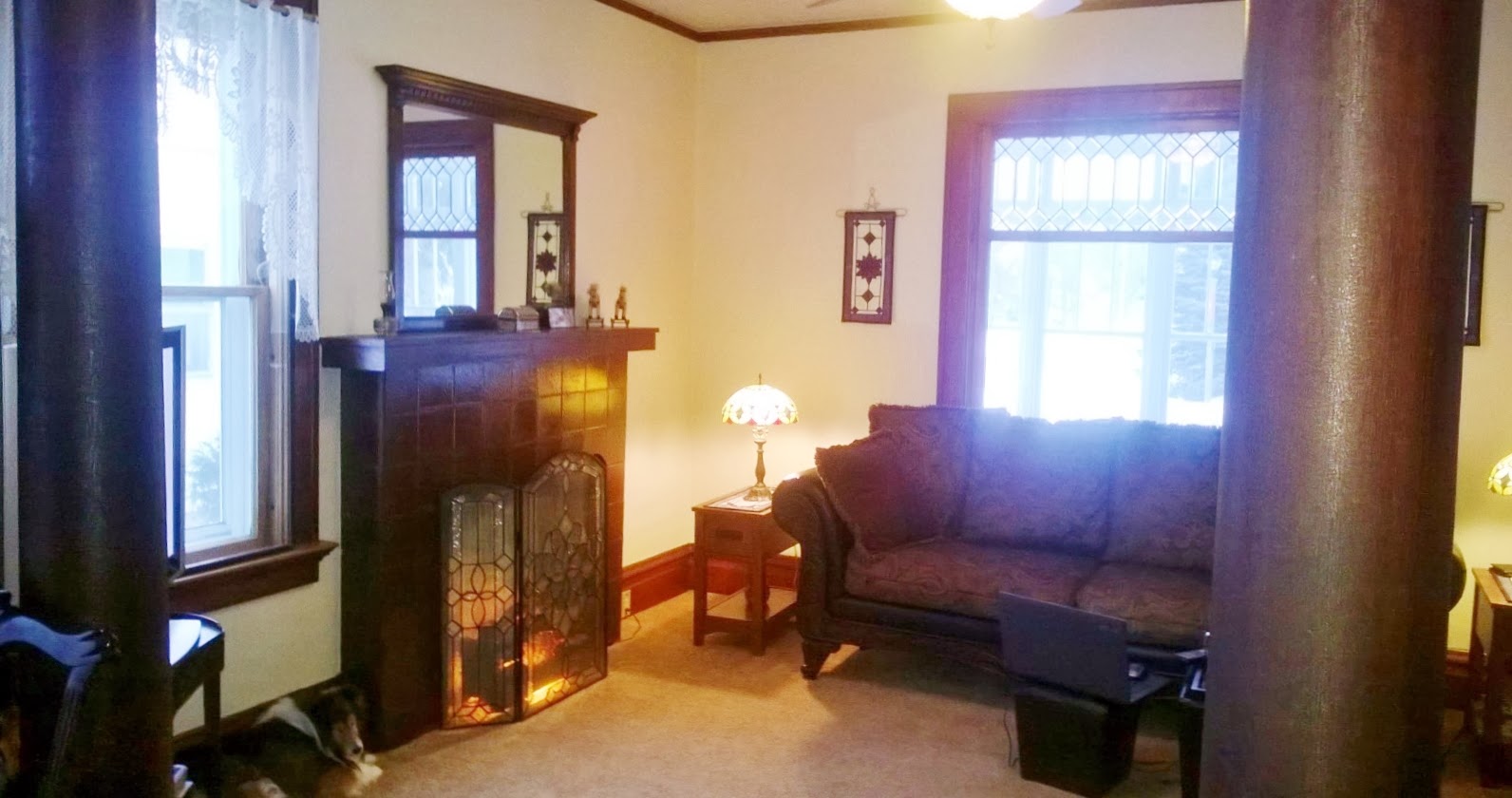 By not putting heavy drapes on the windows, I think the room looks bigger. I only added a lace scalloped valance to the side window.  Steve's brother Pete gave us the big tv, and although it kinda blocks the window a bit, we sure like the large screen and it feels like a movie theater in here.
AFTER 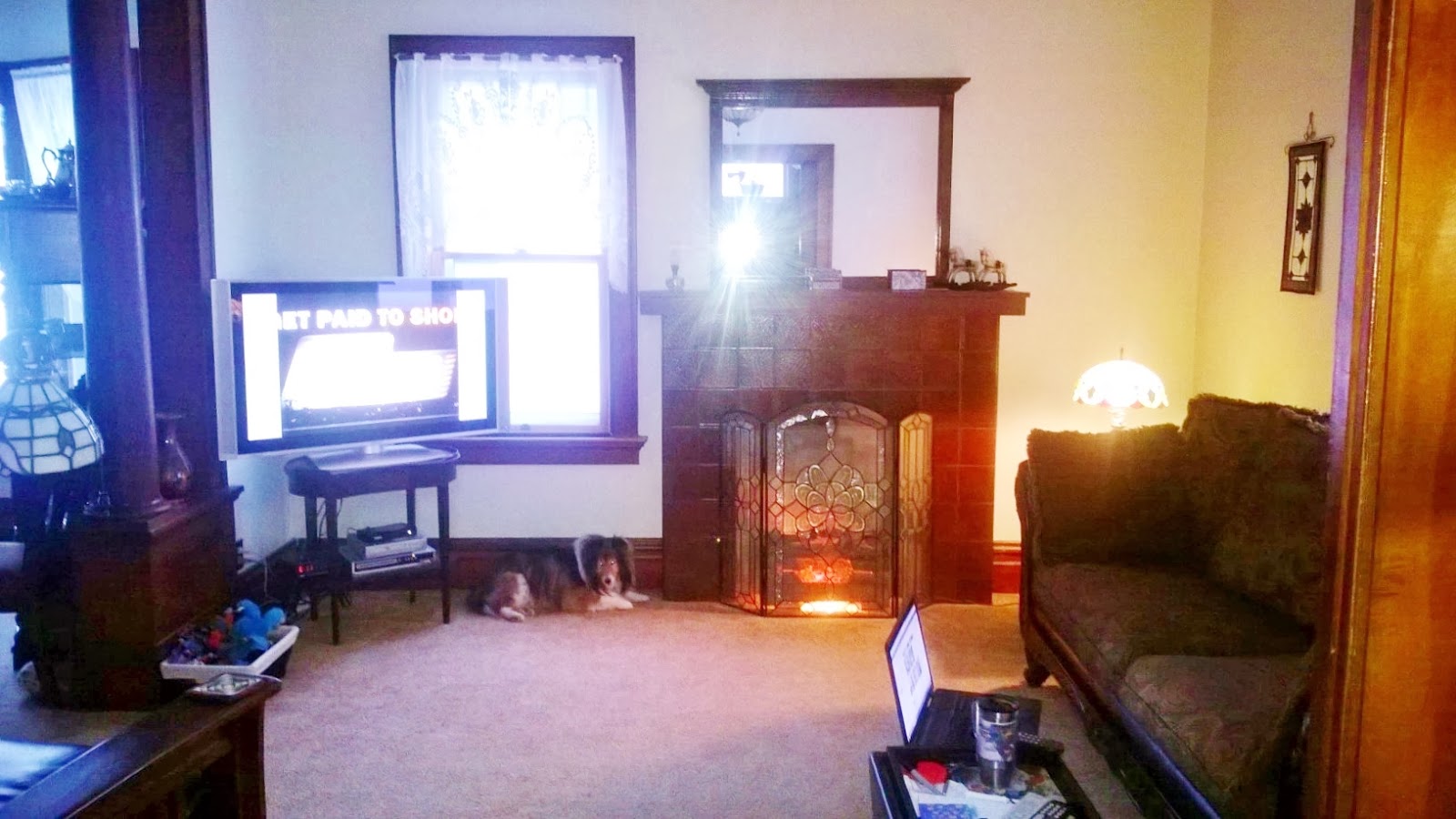 Once the fireplace gets changed over to a gas log one
(we already bought a slightly used one off Craigslist) the room will then be complete. 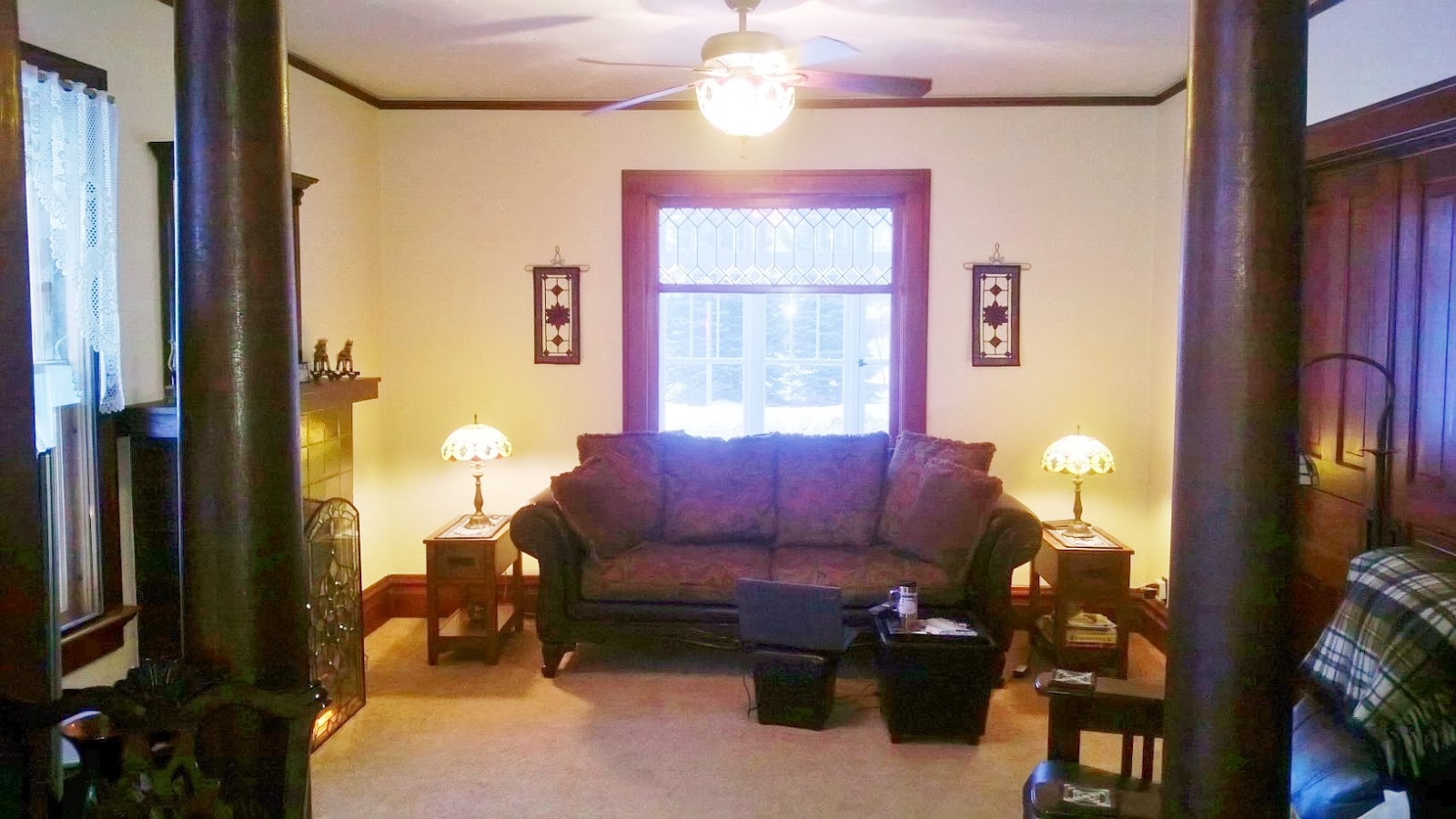 and for my RVing readers...
Here is the rig, patiently waiting in the snow and ice.

We have been keeping the snow clear from the front end,
so we can just hop in and drive it out ...
Hopefully, we will take it south soon to get WARM! 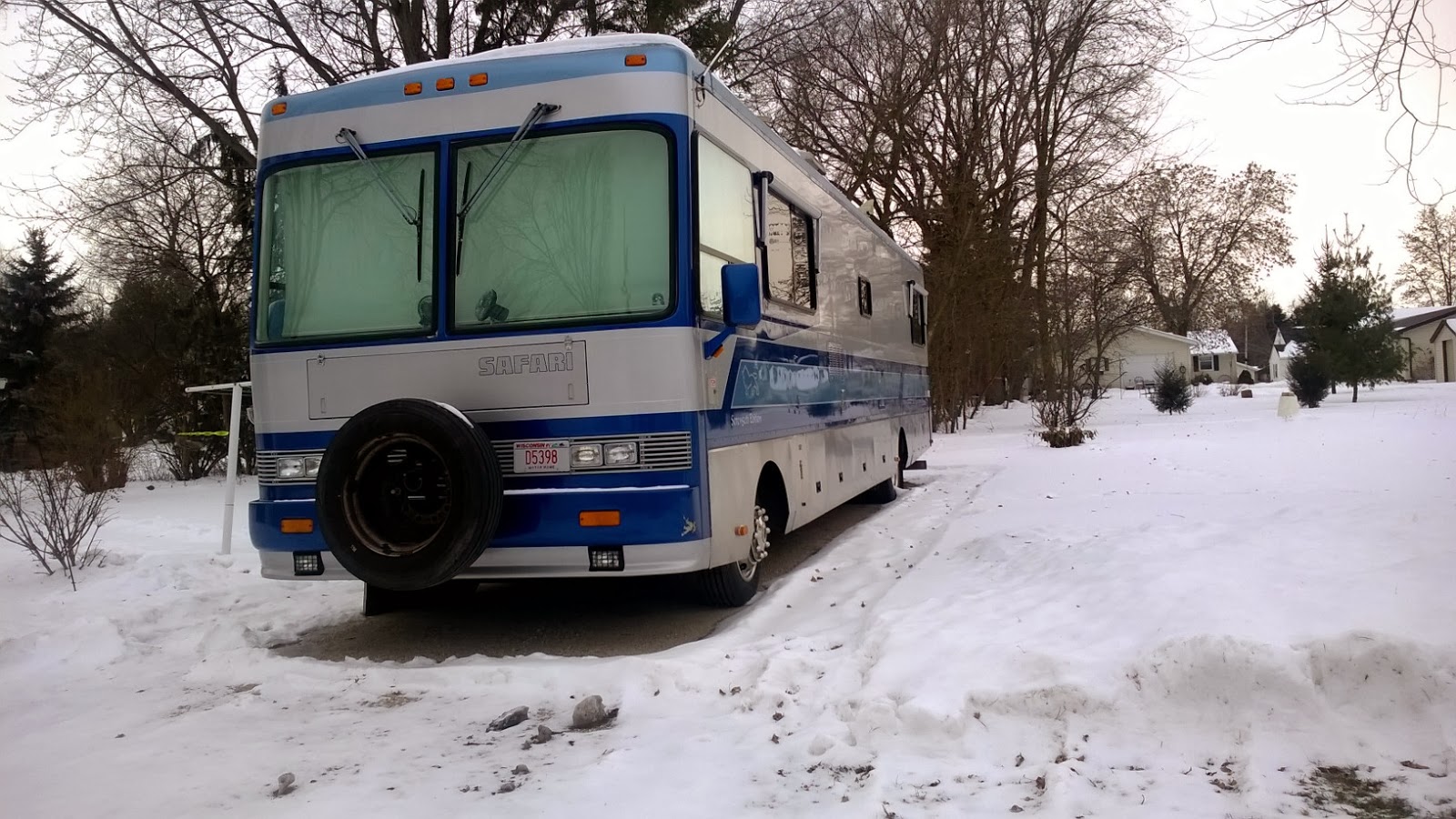 Posted by KarenInTheWoods at 9:11 AM