Back at the Blog

It's a new year, and the last one went by like a blurrrrrrr.

But now things "should" slow down, and I think it's time to get back to the blog!

So much has happened in the last few months, and I think now that the holidays are officially over, I can concentrate more on the blog.  I will try to fill with RV stuff, family stuff, and fiber stuff...

Do you know what that all means?  It means the motorhome is backed in the yard, facing nose out, and ready to roll!  If it all works out, we can take off for a few weeks or so this winter... most likely Florida for a shorter trip.   Two of the staff at the state park where Steve works have moved to other positions, which only leaves 3 full time staff to run the park till replacements are hired and in place. MAYBE by late Jan, or mid Feb that can happen and we can still take off on some vacation?

I could have it loaded up in about 2 hours and ready to head out if it all works out.  The water lines are all winterized, but we would use bottled water till we are south far enough to fill the fresh tank again....


So stay tuned, we might have some winter travels to blog about!

Okay, did you know we were expecting?  Yup... a bouncing 9 pound baby boy!   He's a little fuzzy and not toilet trained, but we are working on that.  He's pretty danged cute though! 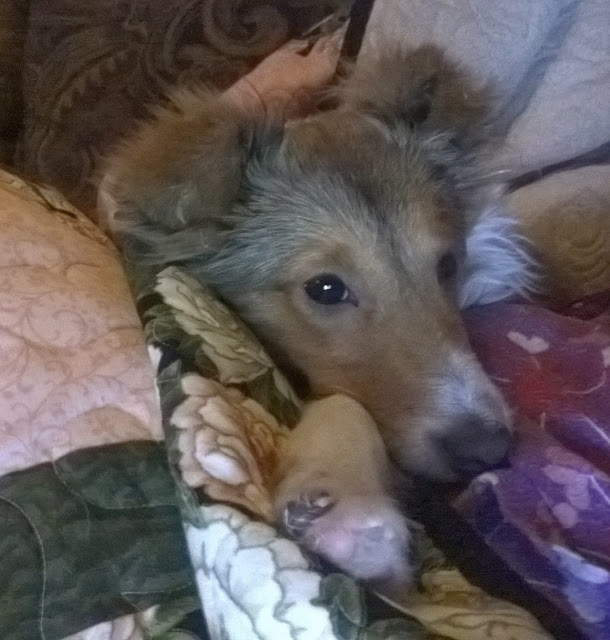 LOL..... about a month ago we applied and were approved for adopting a rescue shetland sheepdog via the Michigan Sheltie Rescue.  Here's the story, and of course, it's pretty sad.  It seems a horrible woman in Midland, MI hoarded a bunch of shelties, breeding them and keeping them in a mobile home that was atrocious.  38 live shelties and 2 dead decomposing ones were rescued from the hell-hole she had created.  Soon the 38 became 70+ as most of the female dogs were pregnant.  The pup we adopted was safely born in the home of a rescue foster person, to a very small young mommy dog, just 8 months old herself!  She is the "Daisy" mentioned in the articles below.


Our sweet pup had some health issues when first born, and was kept until all was right and safe and healthy... before he and his littermates were allowed to be adopted. We got him at 20 weeks old, after three different volunteer people worked to transport him over 550 miles to us!   Thank you so much to the kind people who all played a part in our getting him to our home!


We named him Finnegan (also Finney, Finster, and Finnegan Outagain Inagain)  and Duke is absolutely smitten with him!~  Duke has been so lonely since we put down Ducky in June... and this has really brightened his world.


Duke's health is faltering at times, and his tumor is large and growing under his armpit now.  Sometimes he breathes so hard with no exertion, so we figure it's the onset of congestive heart failure.  He goes to the vet next week with the pup, so we will learn more about him too. 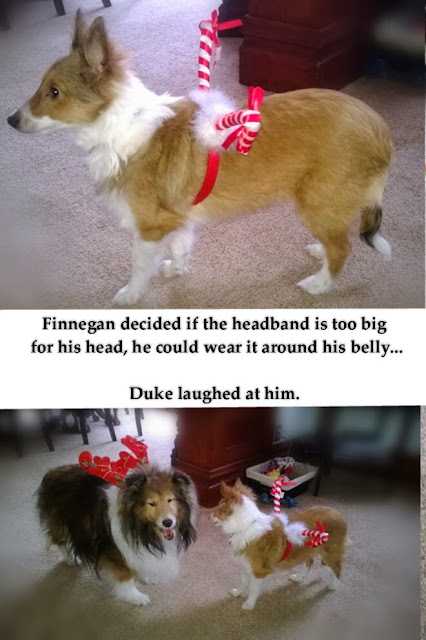 We had a great Christmas, starting out with a party we hosted at our home for some of Steve's co-workers.  Then we spent a lovely Christmas eve alone, making a luscious snow crab dinner by candlelight.   Christmas day was spent with Steve's side of the family surrounded by joy and fun and laughter... but by the day after Christmas I became sick... and sicker... and had to bow out on seeing all of our grandtots at daughter Erin's house on Saturday for our side of the family celebration!  Steve went alone, while I stayed home sick with the company of only the dogs.

The kids kept me abreast of the happenings up in Oconto with video clips and photos sent text and by email.  I saw all the monkeys playing on the sleeping bags I embroidered their names on. It warmed my heart and made me feel better.  So that is a bit about fibers for my creative friends.... 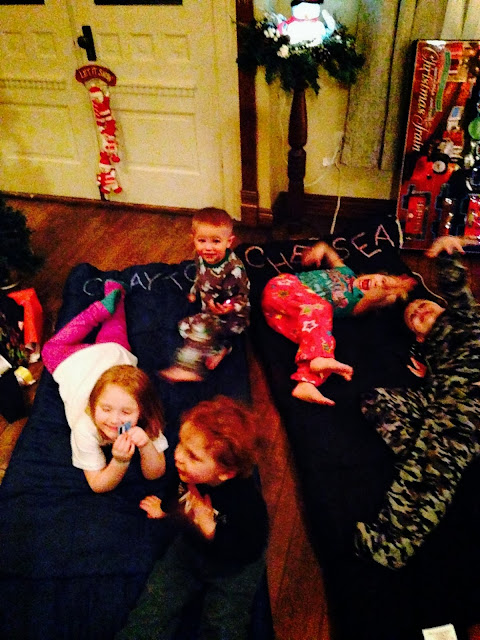 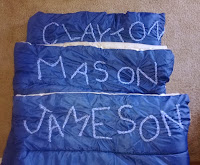 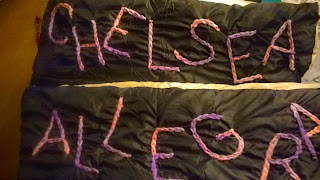 Steve hauled home all my presents which were wonderful, but I sure wished I could have opened them up with all the loving children and grandchildren around me.   My only solace is that I will see all five again in 2 weeks at Chelsea's 4th birthday party!

It is also the one year anniversary of the closing on our home we purchased last year.  Here is the blog post I made of that crazy day:

New Years Eve came quietly and coldly, as most nights the temps have been down in the 5 to 10 degrees below zero range.  The wind chills are in the 20 to 30 below range ...ACK!   Plus, on top of it, Steve caught what I had, so now he was down and out.  We were supposed to babysit for Allegra and Mason, but with Steve so much under the weather, we had to bow out.  Daughterinlaw Heather said Dan also was having a rough day and was not going to go out anyhow, so we were off the hook for the babysitting obligation.

And that brings up to New Years Day.  We are both not up to snuff yet, but we laid around, watching movies and the Wisconsin Badger football game (we lost) .  As I type this up, I have one dog laying at my feet, another draped over my lap and both are snoozing... hmmm for that matter, so is Steveio!

Posted by KarenInTheWoods at 6:48 PM