I had a few questions in emails about our puppy adoption process....

The 38 Shetland Sheepdogs were taken from the horrible conditions in a rescue mission with police/sheriff involvement in Lower Michigan and then checked by vets and volunteers.  Then they were doled out to various Rescue Members' foster homes to be evaluated and nursed along till many of the females gave birth to puppies.   38 dogs soon became over 70!

Daisy (who was mentioned in the article links on yesterday's blog post)  a young pregnant female went to a kind woman named Robin Matthews for the rest of her pregnancy and delivery of five puppies. One didn't make it.  From what I know, our little guy and his brother were the last of the puppies to get forever homes.  They were born with "puppy strangles" which is Puppy strangles is a disease of puppies, also referred to as puppy head gland disease, juvenile pyoderma and juvenile cellulitis.

Both male pups were treated and finally deemed healthy enough to be adopted.  Daisy, the young mom dog who just turned ONE on New Years, was already adopted to someone in Wisconsin who was bringing her to an event nearby, so we got to go see her!

Many of the Michigan dogs were transported over to Wisconsin where the Wisconsin Sheltie Rescue worked to find them qualified adoptive homes. 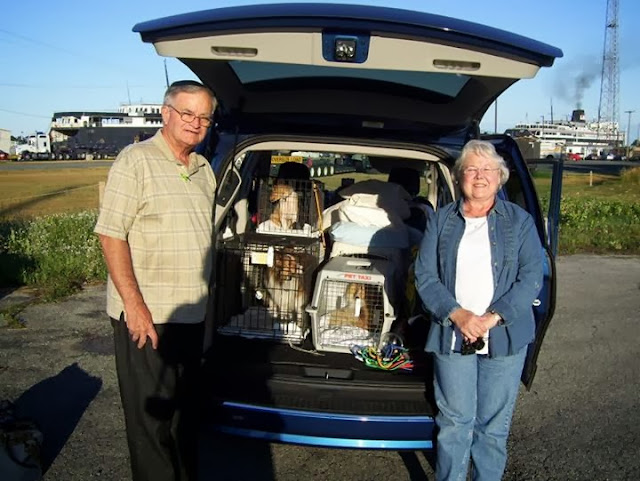 Well, the gal named Lisa who heads up the Wisconsin Sheltie Rescue invited us over to her Open House Event at her boarding kennel called Stockbridge Critter Sitters in Stockbridge, WI near Chilton. http://stockbridgecrittersitters.com/    Lisa is full of wonderful information.    We came to the holiday open house event and saw shelties shelties shelties everywhere!    Here is Lisa with Santa.... 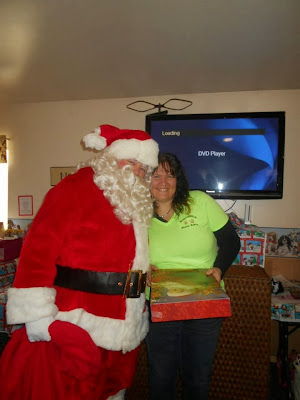 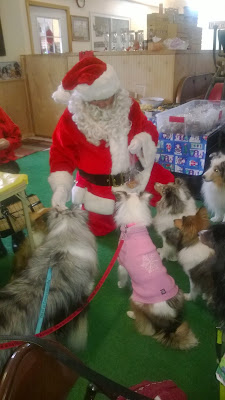 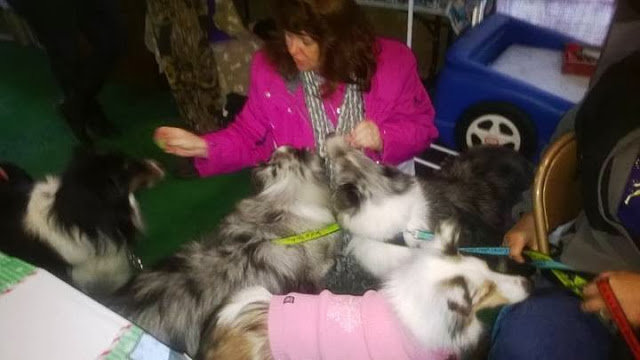 We got to meet little Daisy... the tiny mom dog who got pregnant at 5 months old and had a litter of 5 pups at the age of 7 months old!   She is adopted by a very kind lady who has two other dogs and little Daisy is fitting in well and adjusting to a life of kindness and love and tenderness. She was hanging out behind the counter while her new owner Brittany was helping with sales and information at the open house.

Yes, this is Finnegan's MOMMY! 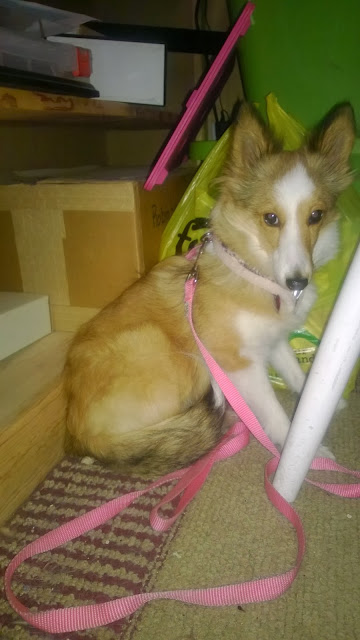 We handed over our application papers to be approved to adopt a sheltie.  With me being a previous sheltie owner, and having a background in showing and training in obedience really helped.  We were given one photo of little "Sprite" as he was known then....  pictured here: 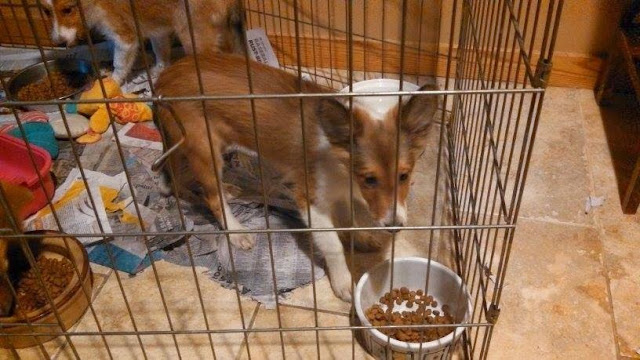 and we stared and stared at it trying to determine his manner and temperament and personality before we knew for sure that we were approved and he was going to be OURS......

When we filled out the pages of application information, we had to give vet and personal references, and detailed information about each pet we have had and what had happened to it at what age etc.   Our application fee of $10 was to help process the application and help the group with determining who would be a good fit for which dog.  Imagine all the phone calls and time involved in checking out a prospective home?


Then....
We were notified that "Sprite" would be coming to us!
Whee heeeeeeee!!!

Once we were notified and approved, we gave a check for $300 which includes the adoption fee, the neutering, the microchipping, and all shots and wormings up to date!  What a deal!   We also signed agreements that if we ever didn't want the dog, it had to be returned to them, and not surrendered to a pound or shelter.

Then due to weather conditions, we were told the dog was coming a day earlier than planned!   It took various teams of volunteers to transport the dog up around from the Lower Peninsula of Michigan up over the Mackinaw Bridge and into the Upper Peninsula... and then we were to meet the last leg up at the Michigan border by Marinette/Menominee.

Also required by the rescue organization is that you have a fenced in yard that opens directly from the house so there is no chance of an escape by a door left open by unsuspecting family members or visitors.  Many rescue dogs are from stray or roaming situations, so the rescue organization wants to be sure that does NOT happen again.

Although Duke and Ducky always used a runner cable along the garage to access the backyard while hooked to their collars, the rescue organization wanted a more secure area for the outside duties of the prospective dog.

Sooooo we ordered up a used 5x10 six foot high kennel from someone on Craigslist who would deliver it to our house.  Well, because of the move-up on the pup delivery date, we had to postpone the kennel delivery and setup till the following day.  But Lisa knew we were serious and I sent her pics of the kennel we were buying and having delivered.  So the pup delivery went on as scheduled.

We zoomed over quick to Lisa's to pick up a borrowed dog crate to transport and potty train the little stinker. We drove through a blinding snowstorm at times, slippery roads and awful weather.  We went in the fourwheel drive Tracker.  We were about 20 minutes late to the pickup point, as were the folks we were meeting were also 20 minutes late... so it worked out perfectly!

Ceora and Ron Hull from Marquette pulled in and opened the door of their car... and they took out this sweet baby, soon huddled right into my arms!   I think the pic says it all: 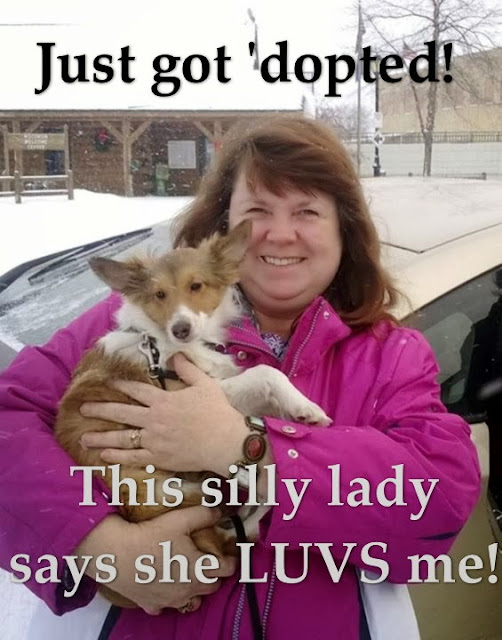 Their two sweet little doggers, Merlin and Dodger, came along for the ride, so I gave them each a little treat and made friends and thanked them for keeping our pup company in their car, so he wasn't afraid to ride alone. 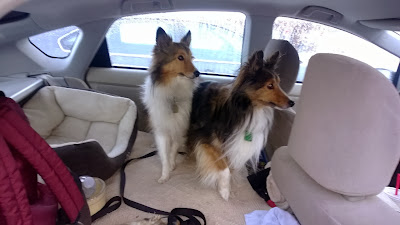 We got little "Sprite" settled into his cage and started our journey home.  We talked to him and let him know our voices and kept telling him he was wonderful.  We stopped for a bottle of water and took him out on a leash for a potty break.  He shivvered in the cold and was timid, but lapped up the water and ate a few treats out of my hand.   Safely ensconced in a cage in the back of our Tracker, we headed to his NEW HOME! 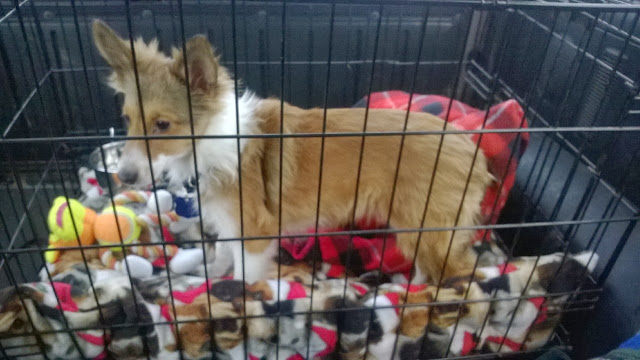 We traveled through snow and slush and winds and cold....
making it home after dark.

Out in the yard we made introductions on "neutral territory"
and the doggers were best buds right off the bat! 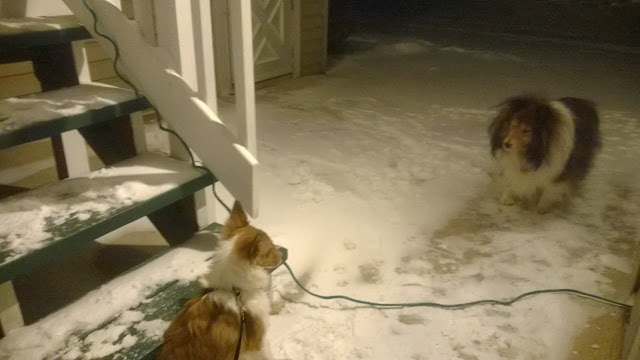 Duke has always been great at meeting new dogs, in campgrounds, on walks,
or when babysitting any of our grown kids' dogs.
We knew it was not going to be an issue for them to meet.
They bonded right away and were playing within the hour! 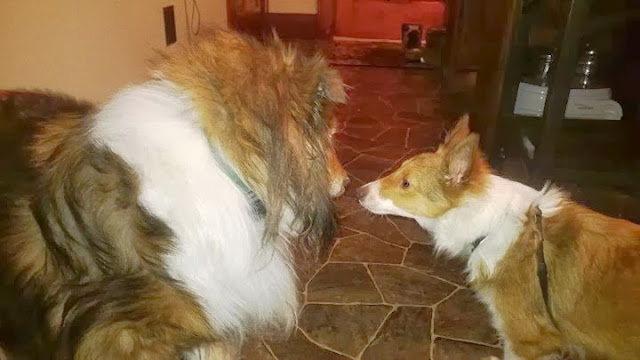 We tried out a few different names, and were thinking of something Scottish... and found Finnegan to be a suitable moniker for this wee one.  Finney... Finster... Finnigan-Innagin-Outagain....   they all fit!

Time for potty training, leash and harness on and off, and in and out every two hours till he gets potty trained and reliable.  We went out and in and out and in till he finally decided to go.  Ahhhh now he got the idea.  With Duke along side of him, showing him how, he is catching on quickly. 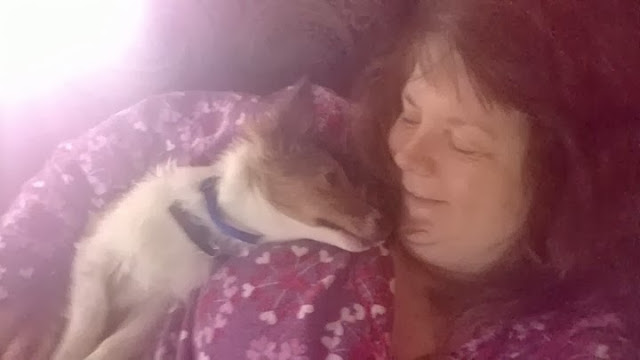 Here is the kennel we set up in two sections to make our "fenced in potty yard".   Ahead of time, we measured and planned to use it in sections to contain the space between our house and garage, making a perfect potty yard!

and here is how it turned out! 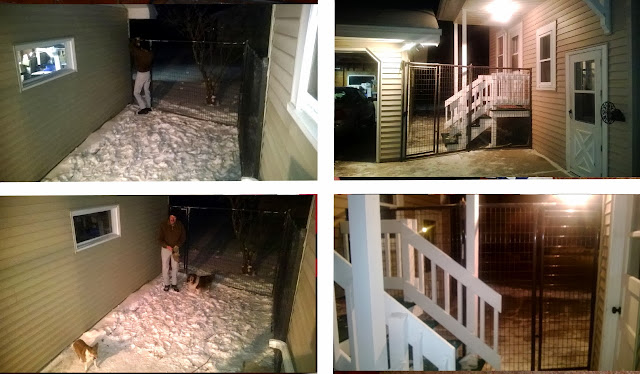 Since he is only 20 weeks old, he is still teething and the pricked up ears could be trained to tip over like most shelties adult ears.  During teething, a sheltie's ears will fly up straight and the cartilage can stiffen and stay that way.  So a dab of "tear mender" non toxic glue on the hairs to glue the tips to the base of the ear----  (no skin, just hair to hair)  and now they are tipping over nicely in 2 weeks.  We will keep them this way for a while and soon he will have tipped over ears like Duke.  We have already found two puppy teeth laying the floor as his new molars are coming in. 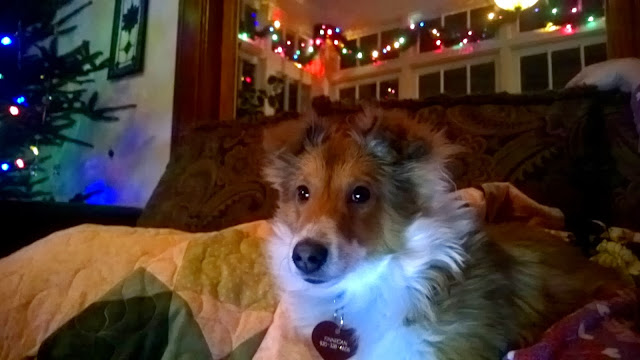 Christmas was exciting around our house, and the new pup blended in well.
We had a few parties and he enjoyed the guests and learned to socialize.

Plus...
Santa brought both dogs lots of toys, 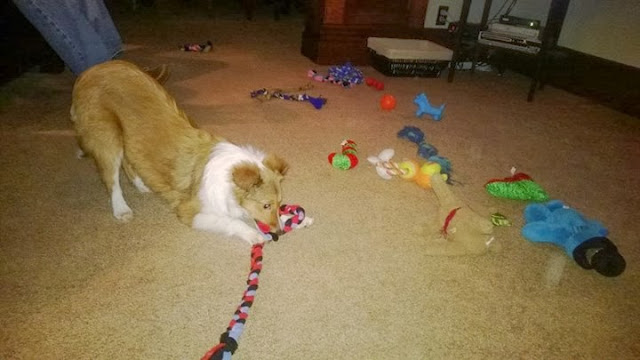 Ours days have been full of potty training, with only two mishaps in 2+ weeks.  Both were our faults, once I was on the phone and not seeing his signals that he wanted out. The other time Steve took too long putting on boots, jacket, hat etc. and the poor pup couldn't hold it any longer!  All in all, things are settling in nicely with our two dog household. Since Duchess has been gone last summer, Duke has been very lonely.  This little pup sure has brightened him up!

Duke and Finnegan play together so well. 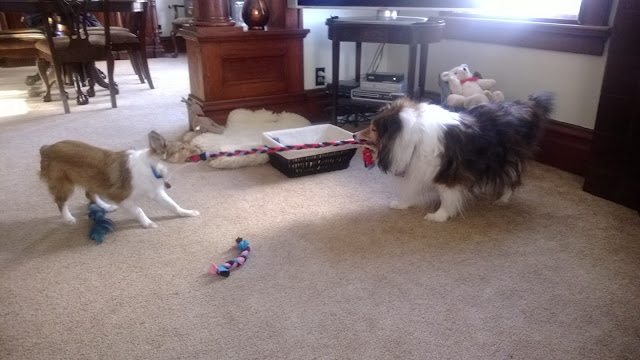 Sunday mornings are now a two dog cuddle time up on the bed,
with two stinkers getting snitches of our donuts ... hmmmmmm
they sure look happy, don't they?? 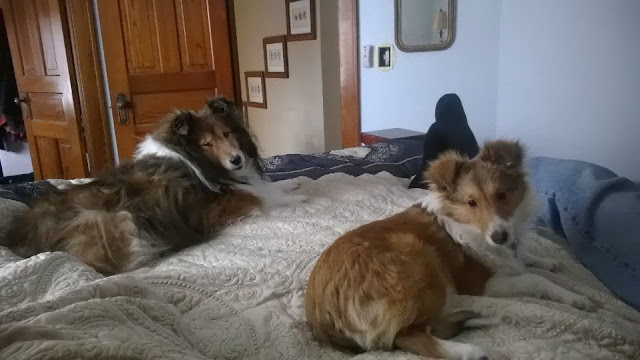 and THAT is how we adopted a puppy!

Posted by KarenInTheWoods at 8:54 PM