Today my Steveio was off work so he had a WHOLE list of things he wanted to get done.  It was zoom zoom zoom right from 7 a.m.  That guy don't let any moss grow under his feet.  Not that any moss is growing right now in Wisconsin.  We are due to get down to 10 below again tonight....brrrrrrr

It was snowing today so I shot this little video
for those of you who don't get snow....

First up, he installed four new florescent light fixtures in the garage.  Our daughter Erin and husband Mark bought him new ones for Christmas, as the old ones' ballasts were getting worn and not working as well in the cold temps.  They took a long time to flicker and get going, and even longer to get brighter.  Usually whatever he was going out in the garage to get or do was done before the lights got bright enough.   Time for new ones!  So he was out there wiring and screwing and hanging those new lights.  A quick trip to the hardware store was necessary for some extra wire and a few more junction boxes, and he was done.  Good thing it's only a block away.  Another thing to like about living in a small town!

Next up on his list ... in preparation for the cold weather again, he decided our laundry room was too cold.  There is a heat duct in the wall with a register to the opposite side in my loom room, and had at one time been open into the laundry room when it was the kitchen/pantry.  We saw the marks on the wall when the other cabinets had been removed.  He opened up that portion of the wall again .....   it just happened to be located right under the laundry sink! 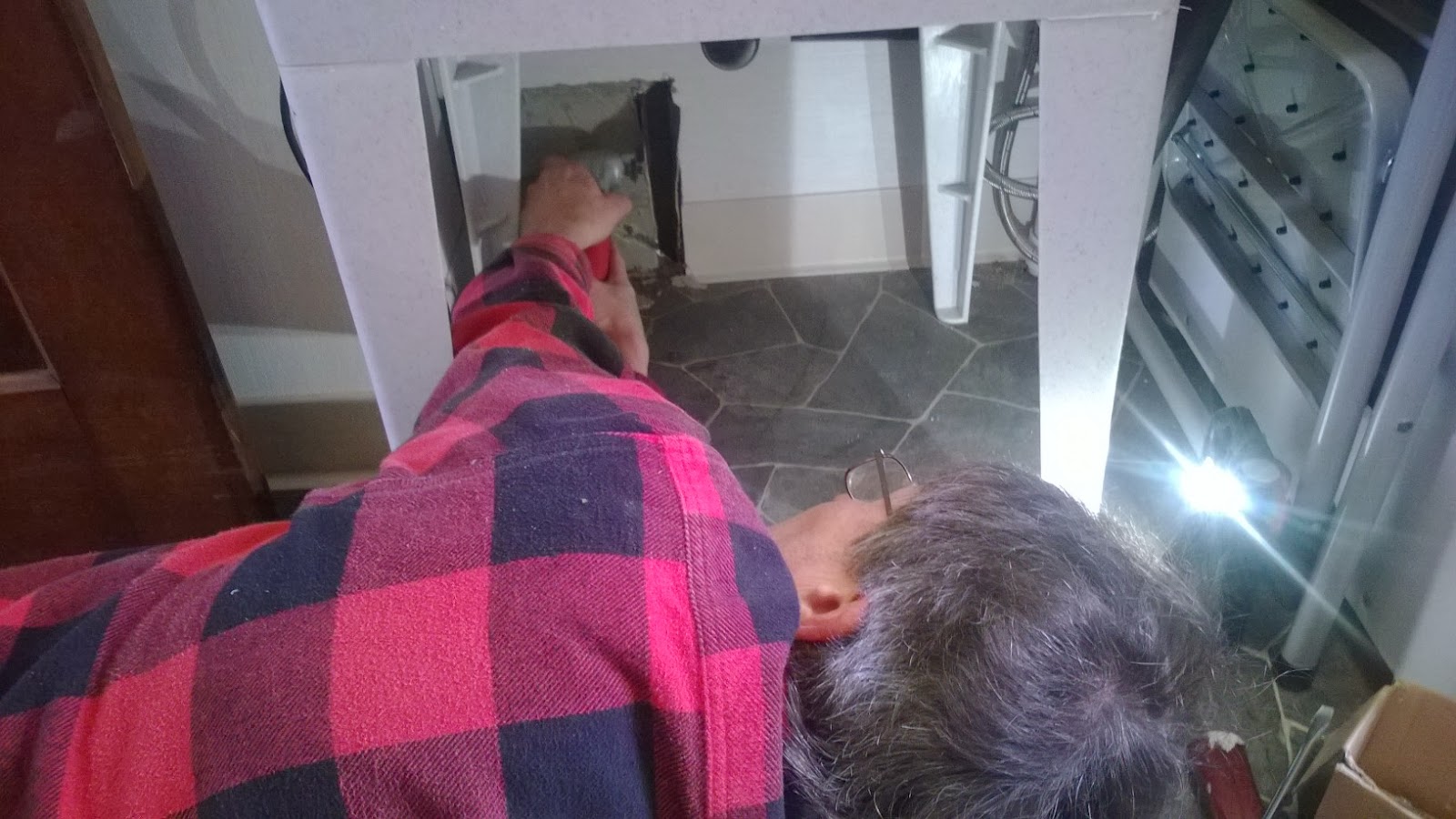 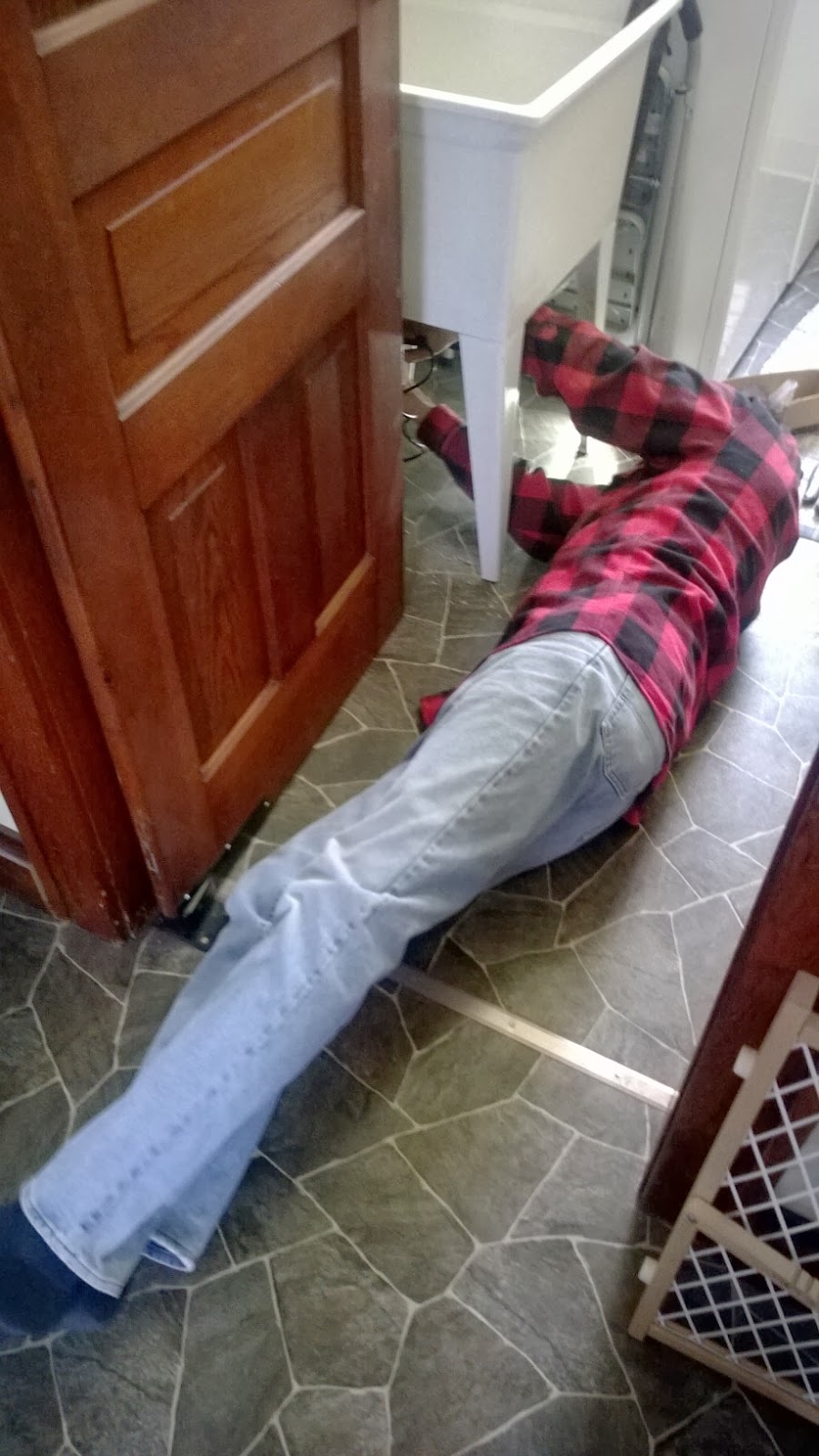 The job went well, as he cut through from the other side... and of course he had two supervisors on the job making sure he did it right! 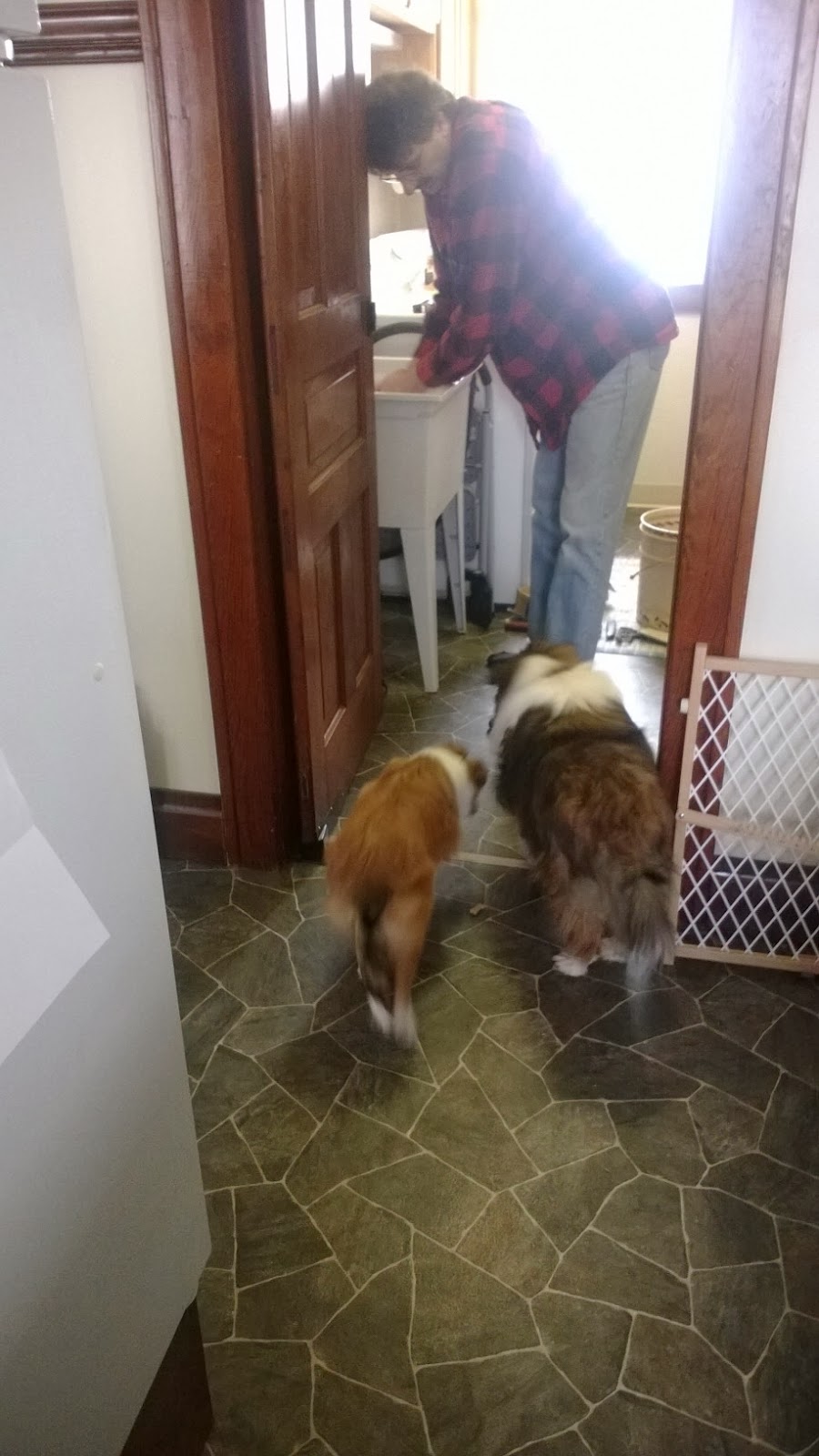 The next job on his list was to add a door sweep to the bottom of the front wooden door.  During the last cold spell that went below zero, we had frost building up on the door sill. It was on the inside from the cold air coming in.  He had put a door sweep on the back door last month, so now he got one for the front door.   The only thing, those danged canine supervisors promoted little Finnegan up to a Puppy Director!    He had to make sure Steve lined it up perfectly.... 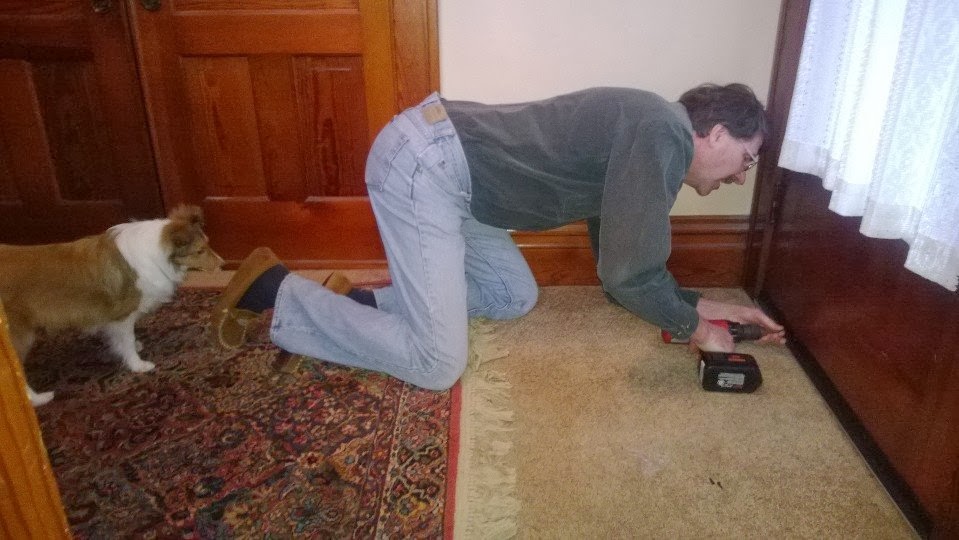 So Puppy Director Finnegan told Steveio to go get a level.  While Steve was gone out to the garage, that stinker puppy STOLE the plastic bag full of screws and ran off with them, hiding them under the dining room table! LOL LOL!

Of course, in between jobs, we did normal every day stuff like laundry, dishes, grocery shopping, and made BBQ ribs for supper.  It was a full day!    I gave Duke a bath because he had a poopy butt (stealing all the rich puppy food caught up with his digestion!)   Finnegan got some leash training and is doing better with his "Come"  "Sit" and "Stay" commands.... and is heeling well and thinking this is all a fun game.

This evening, I had my weaving guild meeting in Menasha to go to.  We shared some projects we had brought in.  One gal brought in a lovely three dimensional woven structure that will be mounted upright for display. 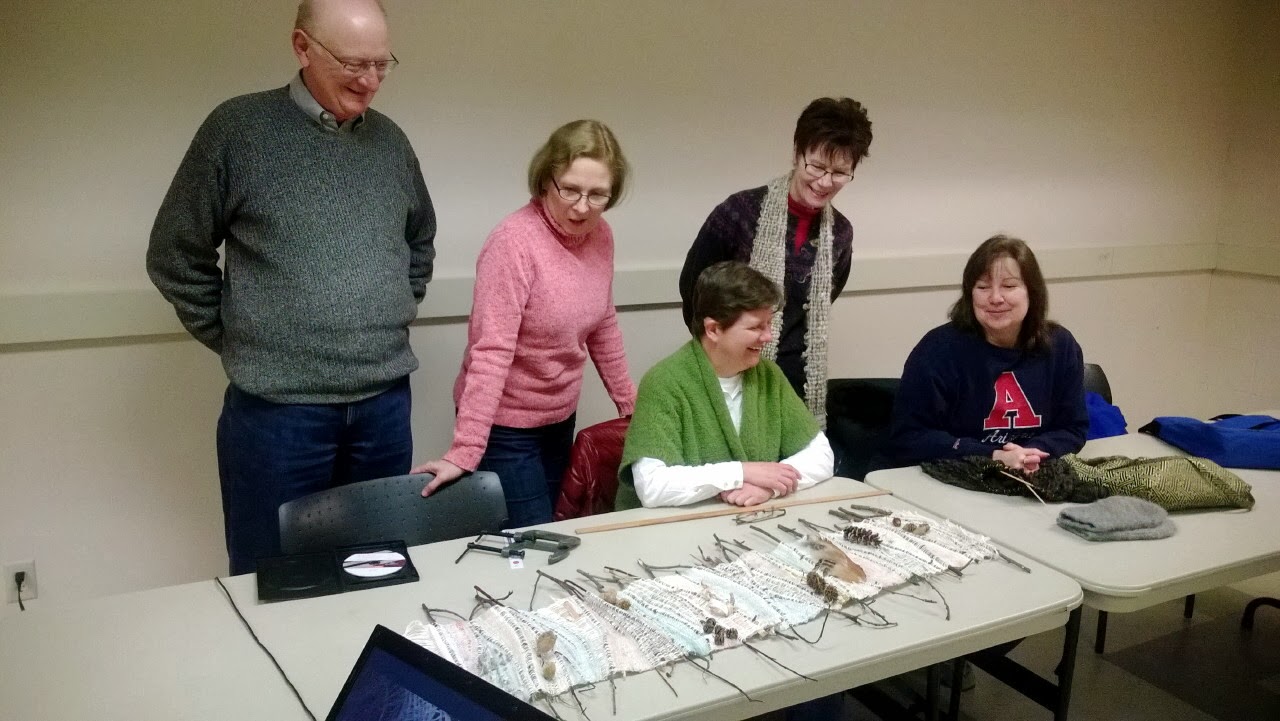 She wove in pieces of natural items found around the area...
pieces of birch bark, feathers, pine cones, dried grasses and twigs!

She envisions it standing upright along on a shelf and was determining different methods
to help the structure stand upright for display. 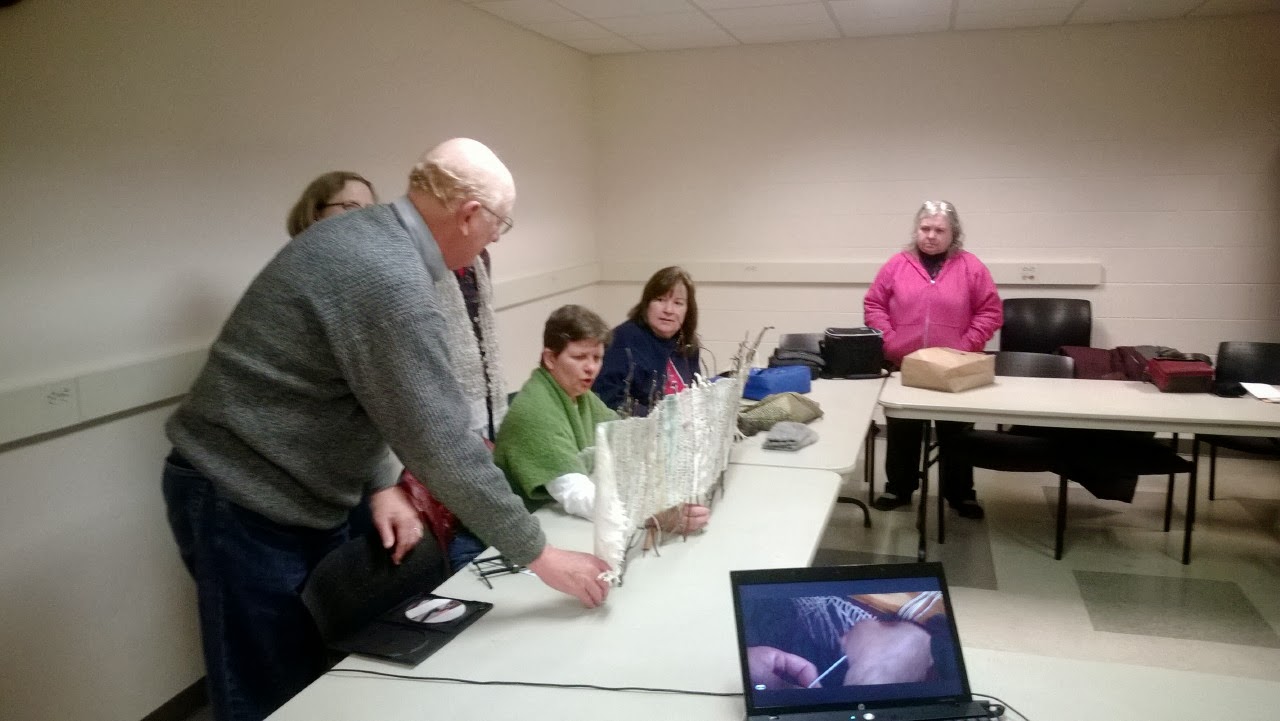 We were all very interested in her piece.... as most of us weave normal textiles
and household items like rugs, towels, scarves, and mats. 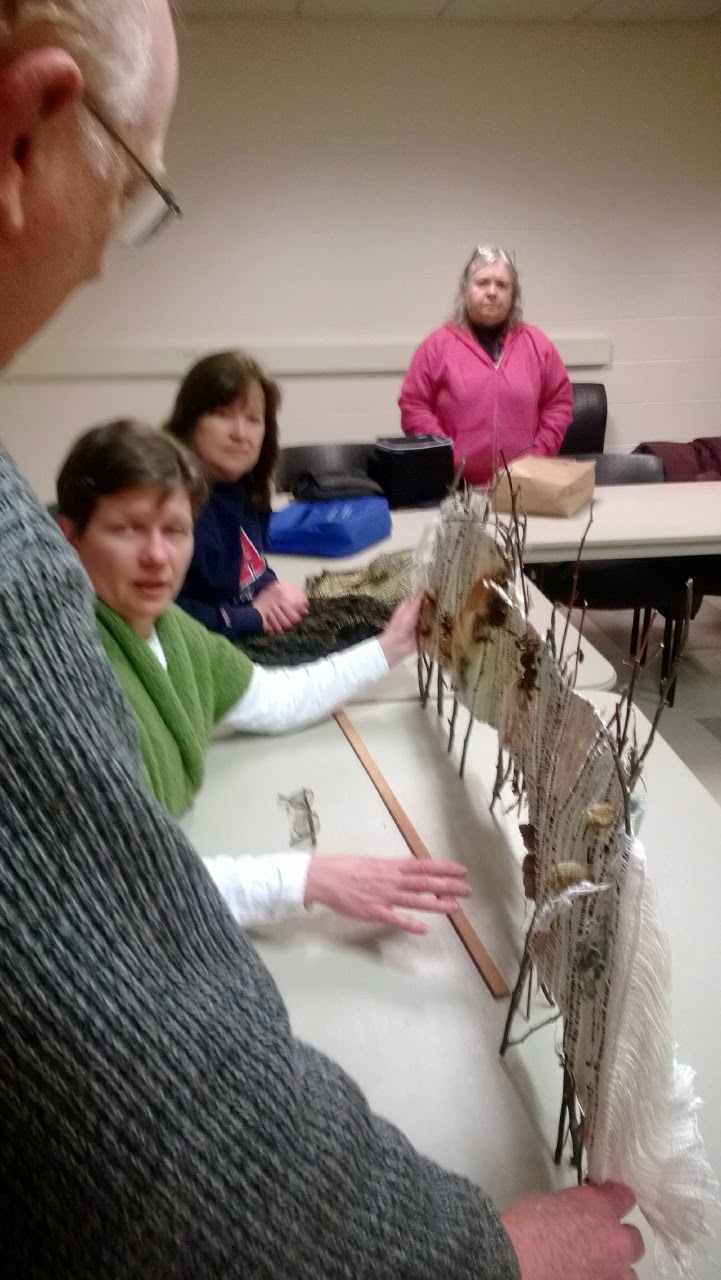 This gentleman is a newer weaver who has recently joined our guild.
He brought in a number of pieces he has woven that were very bright & colorful. 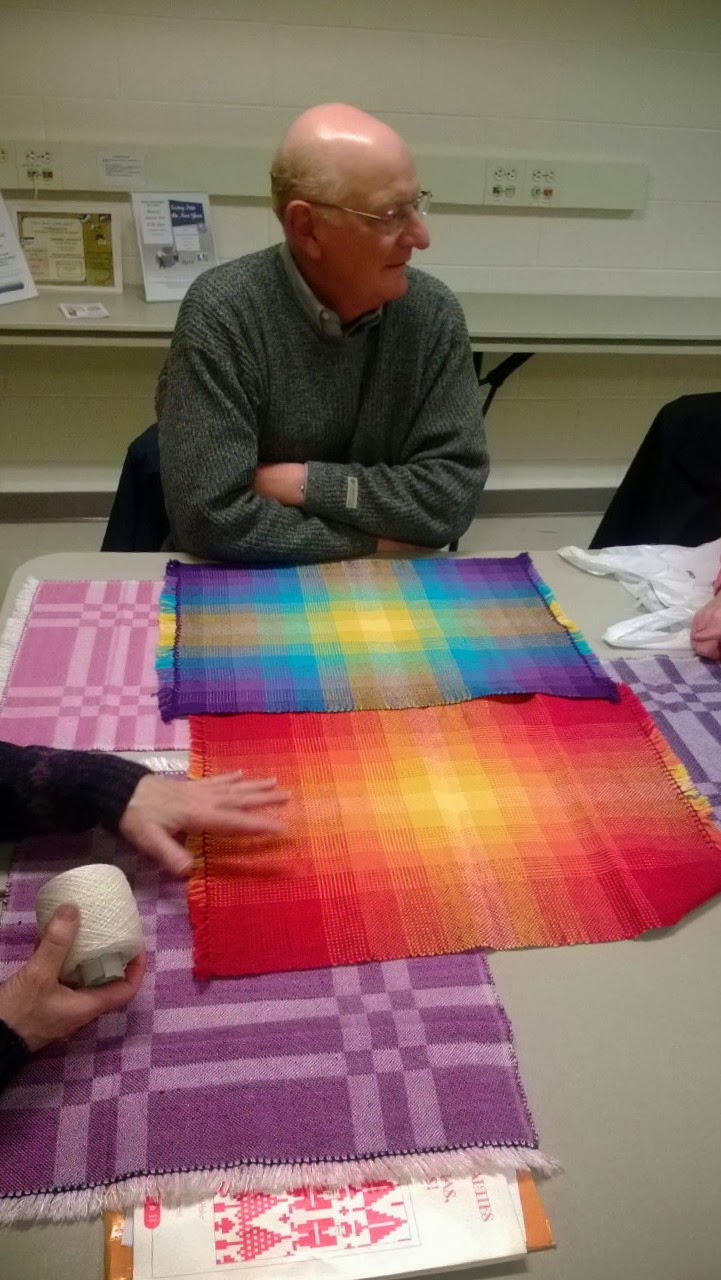 We examined his various colorful gamp pieces
and the precise weaving of evenly spaced twill structure blocks on the three pink/purple mats. 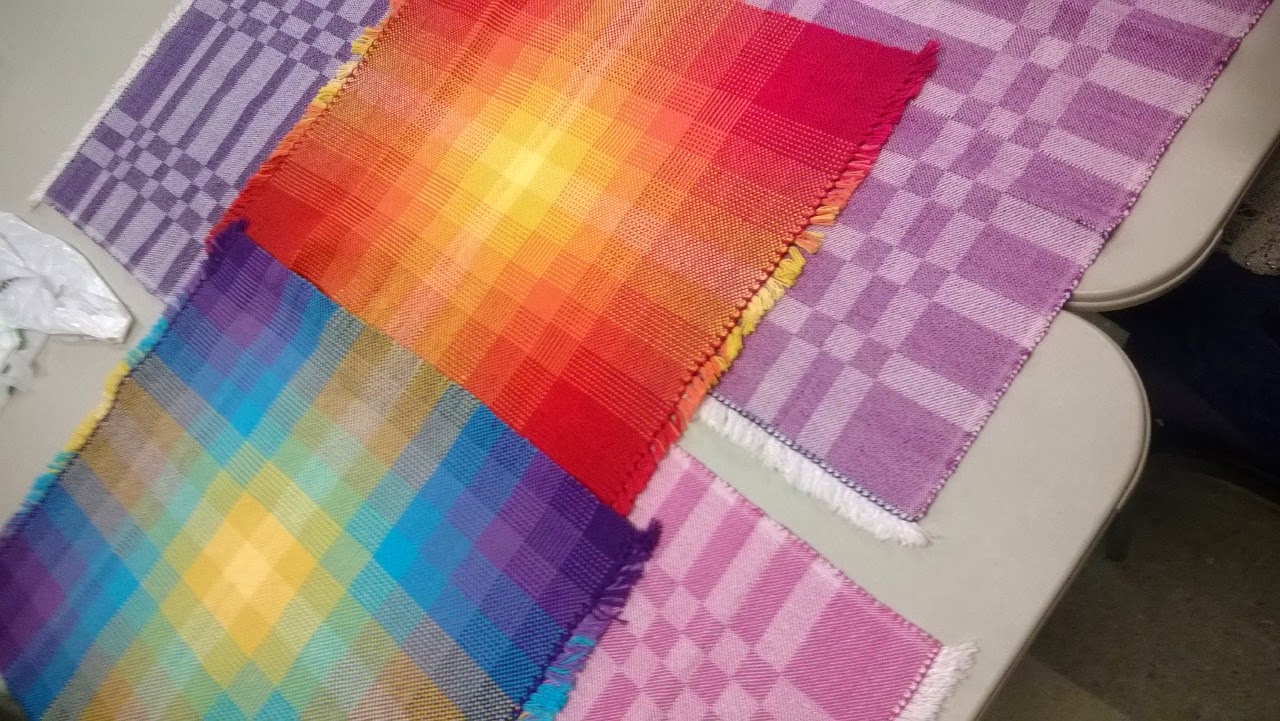 After we all shared our ideas and projects,
we then turned to the third part of a video series
we have been watching at our meetings.  It is:
http://www.interweavestore.com/weave-a-good-rug-with-tom-knisely-from-fiber-to-finish 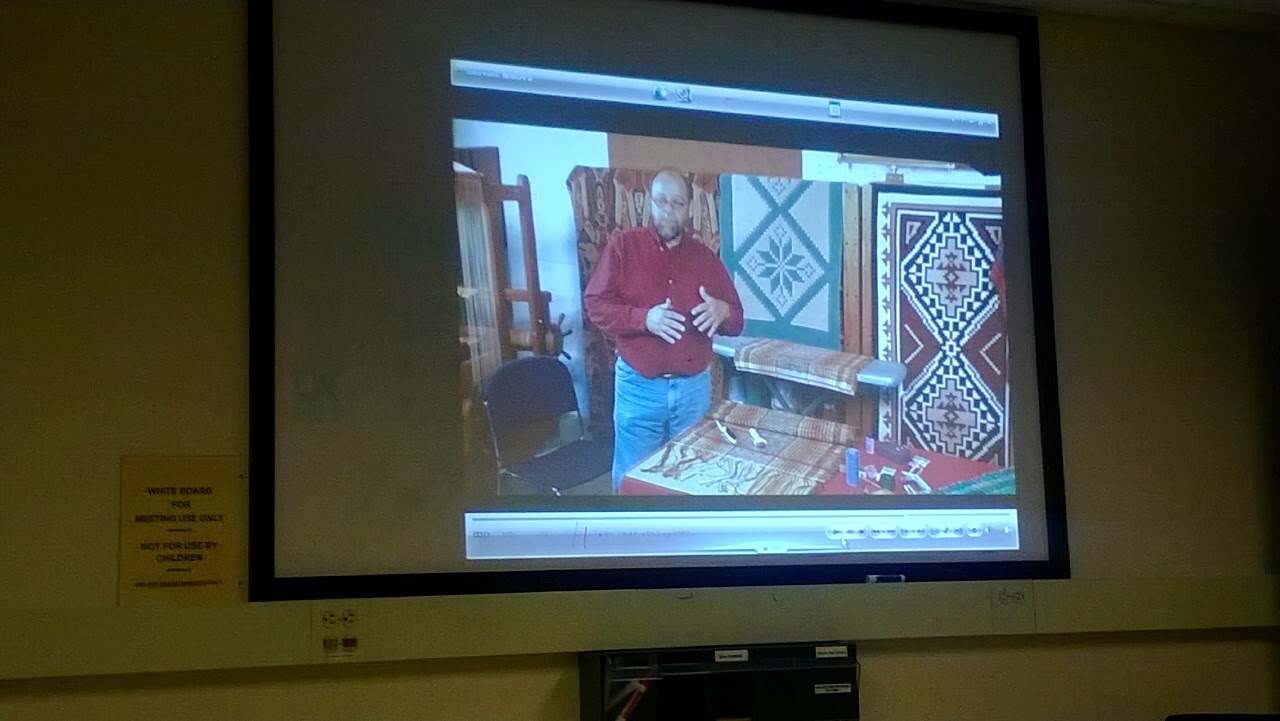 The DVD is very informative and has wonderful coverage of all aspects of weaving a rug. I wish something like this had been out long ago when I started weaving rugs.  With all the tips and tricks he shows in the DVD, I would have avoided a lot of mistakes I had made as I learned along the way.

Once the meeting was done, I drove on home to my cozy house with my sweet man and two stinker dogs waiting for me. Temps were already down to 5 degrees, and dropping into the night.  It sure felt good to be home again.

Posted by KarenInTheWoods at 10:08 PM