Yes.... it has finally warmed up enough to go out and check on the motorhome without freezing our fingers to the metal! Just like the movie of sticking your tongue to a flagpole??  Haha.

Steve noticed our battery bank was down to the 50% range, so he was able to get up on a ladder today and clear off the solar panels of ice and snow.  He also exercised the generator a bit to charge them up at the same time too.  Running the generator once a month under a load is good to do.  We hadn't done that often enough in the past, and ended up having our rotor go out and needed to have it rebuilt.  NOT fun!   Because the entire generator needs to be removed out the bottom of the rig on a downhill slope to get to the part off to be shipped out to get rebuilt.

Now we make sure once a month we run the generator and either turn on some electric heaters, run the furnace, or let the batteries charge up if they are down.

Sooo now our batteries are up to snuff, and we may think about escaping sometime soon to parts unknown.. preferably WARM! We will see what happens.  Hmmmmm?


We also took the time to explore the motorhome with the new puppy!   We have to introduce him to the rig so he knows what is what.  Duke of course dashed right in, but little Finnegan was a bit hesitant.  Duke told him this Big Blue Box takes doggers to interesting places to sniff! 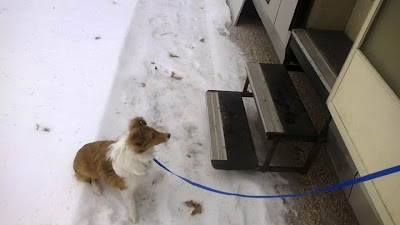 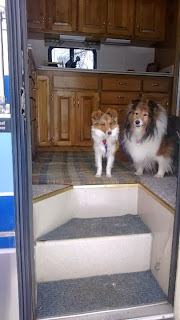 Duke gave Finnegan the "grand tour" of the motorhome.  He showed him the front area with the livingroom and driving area.  Then the middle kitchen space, then through the door to the bathroom and finally took him to each side of the big king bed in the rear bedroom.

As the sniffing went on, I am sure he could smell the scent of our old Duchess from last summer yet, and was wondering where that other doggie could be?  I know Duke misses her too, and smells her from time to time, getting a far-away look in his eyes.

Duke showed Finnegan where the water and food bowls go in the bathroom, and also the drawer where the doggie treats are kept.  Dang.... they are both empty!  (mouse prevention- no food left in the rig) 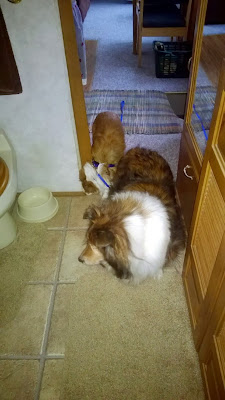 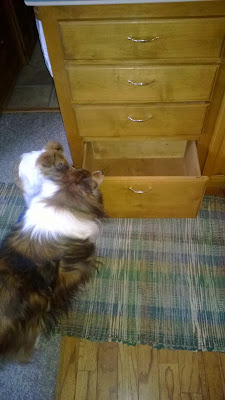 After they explored to their heart's content, Duke decided it was time to rest and show Finney the best seat in the house.  So I lifted Duke up and soon little Finney decided he needed to be up there too~!   Here we have TWO Kings Of The Road: 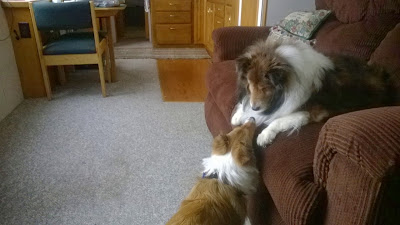 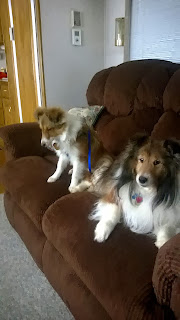 "Ahem.... we may have licenses,
but we don't know how to drive.
Can you please get in here and take us to some places to sniff?? 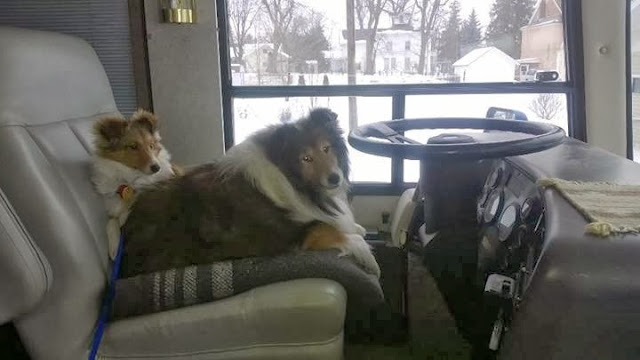 All in all, I think he will make a good traveling buddy for Duke, and we will teach him to be a good Campground Doggie.  It's important to us that he learns to behave and not make a nuisance of himself.  Nothing can be worse than being camped next to someone with an irritating barking noisy dog.  Arggghhh!


Friday night, Wisconsin was going to be covered in a sheet of icy sleet snowy mess and we didn't go anywhere other than to the Red Box to rent a movie before it got too bad.   We were cozy and snug at home with our doggers and didn't venture out except to bring them out to the back yard for potty breaks.

Saturday was a fun day for us--- the snow and ice were melting and the temps raised enough to get the salt brine working on the road surfaces.  So what was ice covered and dangerously treacherous the night before, was now just wet pavement.

We had a GRANDTOT BIRTHDAY PARTY to go to!  Chelsea, the middle grandtot, turned 4 on Friday and was having a party at her home up in Oconto on Saturday at noon. It's 70 miles one way, through all the construction around Green Bay, so we had to leave an hour and a half early.

We decided to leave Duke home, to rest, and because he gets so excited and his heart pounds so fast if he is in the middle of the people and wants to get them all to play etc. He thinks everyone should play tug and fetch and frisbee.  For 4 or 5 hours he would be in a tizzy of wanting to play.  Duke's heart is showing signs of congestive heart failure and some murmer, so we don't want to over-excite him any more.  But we did take the pup along because 6-7 hours away might be too long to leave him at home.  Plus, he hadn't met most of the grandtots yet either.

The Birthday Girl, Chelsea got to hold him first while playing in her toy room... Oh my it was Puppy Love at first sight...  The pup was cuddled and gently played with.  He was such a good pup and behaved himself. 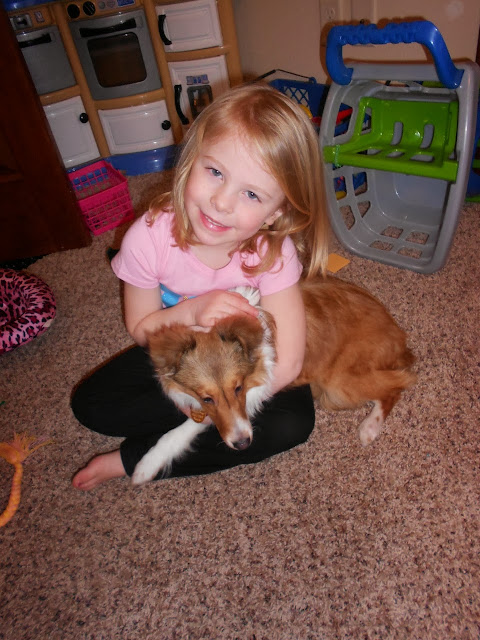 The grandtots took turns playing with him,
and this was quite a feat to get ALL FIVE to sit still in a row~! 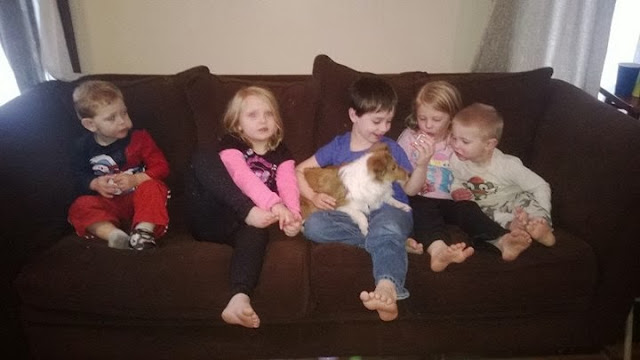 Our daughter Erin and son-in-law Mark have a nice big house in Oconto, perfect for big family parties.  Little Chelsea decided her party should be Sponge Bob Square Pants themed, and everything was decorated for the event.   Mark built these little child size picnic tables, one for the toy room and one for outdoors in the summer time.  How perfect for a bunch of little tots! 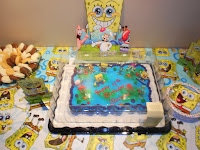 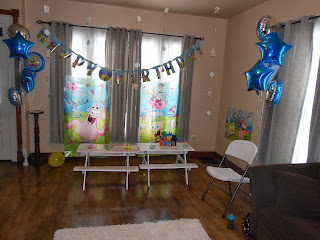 This room was soon filled with aunts, uncles, cousins, grandparents, and also some of the children that go to Chelsea and Clayton's daycare.  One of the little boys is name "Finnegan" and we told him how much we liked HIS name that we named our puppy after him!   LOL 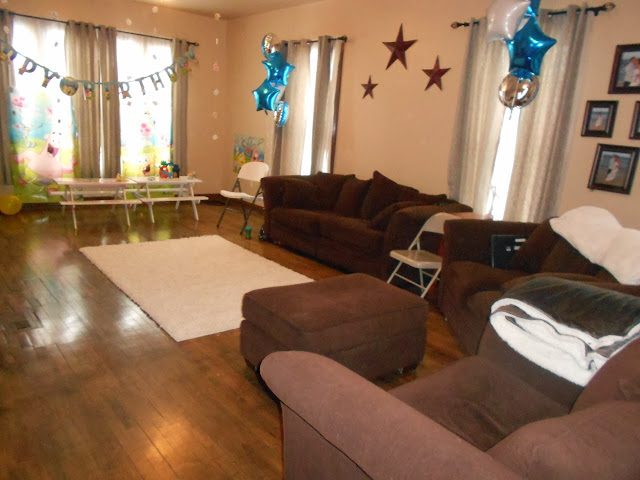 Games were played...
like pin the jelly fish on the Sponge Bob poster.... 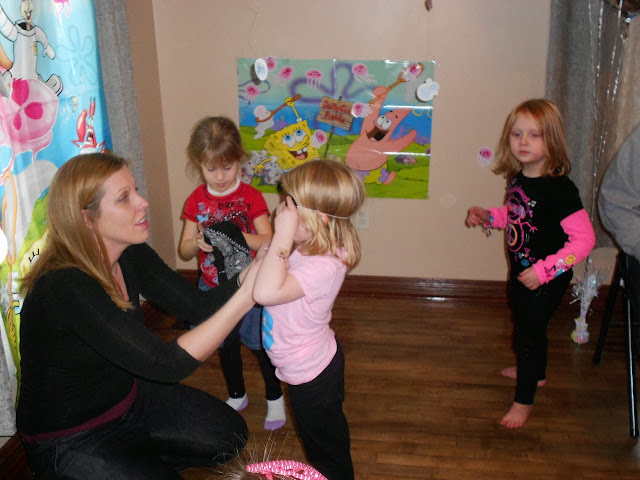 Presents were opened with paper flying all over,
plus gift bags for each child full of party goodies. 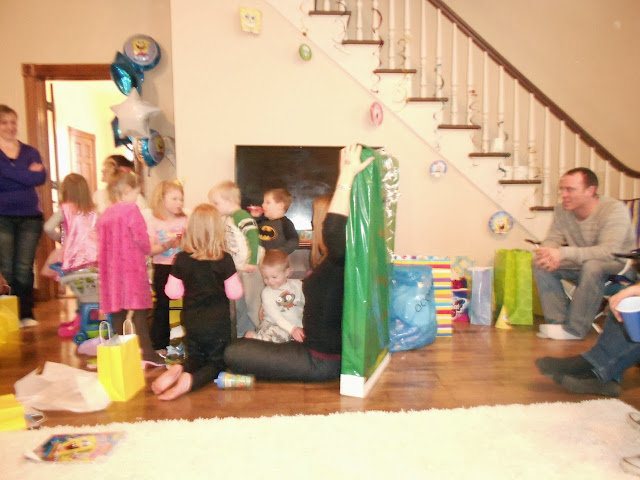 Even a Sponge Bob Pinata was packed full of treats!
Instead of hitting with a stick,
this kind had various ribbons hanging off the bottom,
Each child could take a turn pulling a ribbon,
and ONE ribbon would let the whole bounty of treats fall out! 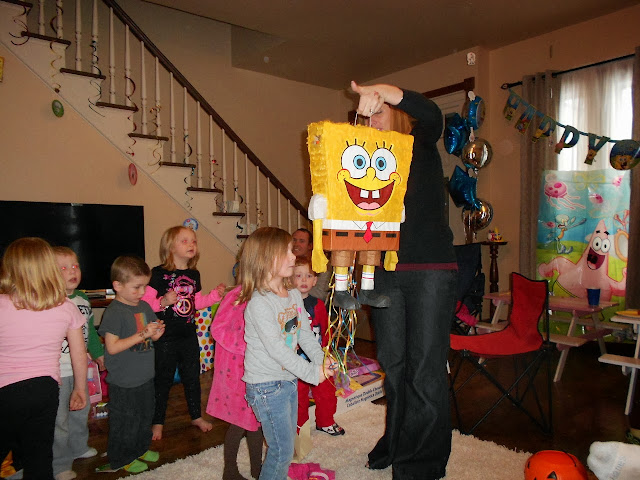 Of course, then it was time for Birthday Cake!~
(actually a cluster of Sponge Bob birthday cupcakes)
1,  2,   3,   BLOWWWWWWWW 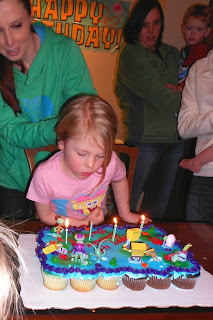 The only time we had quiet was when they were all eating!
I think there were 11 or 12 kids total? 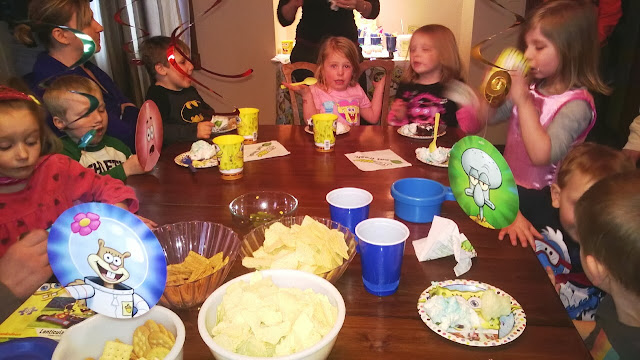 A very happy little girl is now 4 years old, just like her cousin Allegra.  Soon both boys, Mason and Clayton will be having their 2nd birthdays, the end of March and beginning of April.  So if we do go for a vacation jaunt to the south, we HAVE to back in time for those special days too!

Posted by KarenInTheWoods at 7:27 PM