Going Away Party and Bad Roads

Nope, not going away for us... not yet anyhow.

One of the well-loved rangers at High Cliff State Park is transferring to another park...  Rob has been a great help to Steve at High Cliff, and will be missed by everyone.  Park Manager Ranger Linda put together a luncheon party to send him off and give everyone a chance to say "farewell".

I baked up some brownies and lemon bars, and then stopped at the bakery for buns to go along with the meal.  Whew... the roads were pretty slick!  I drove carefully into the park, and just before I snapped these pics, I had slid a bit sideways and knocked my back quarter panel against a snowbank!  Thankfully, no dents!

The park sure is pretty this time of year, with the snow along the craggy outcroppings of the lime stone quarry.... 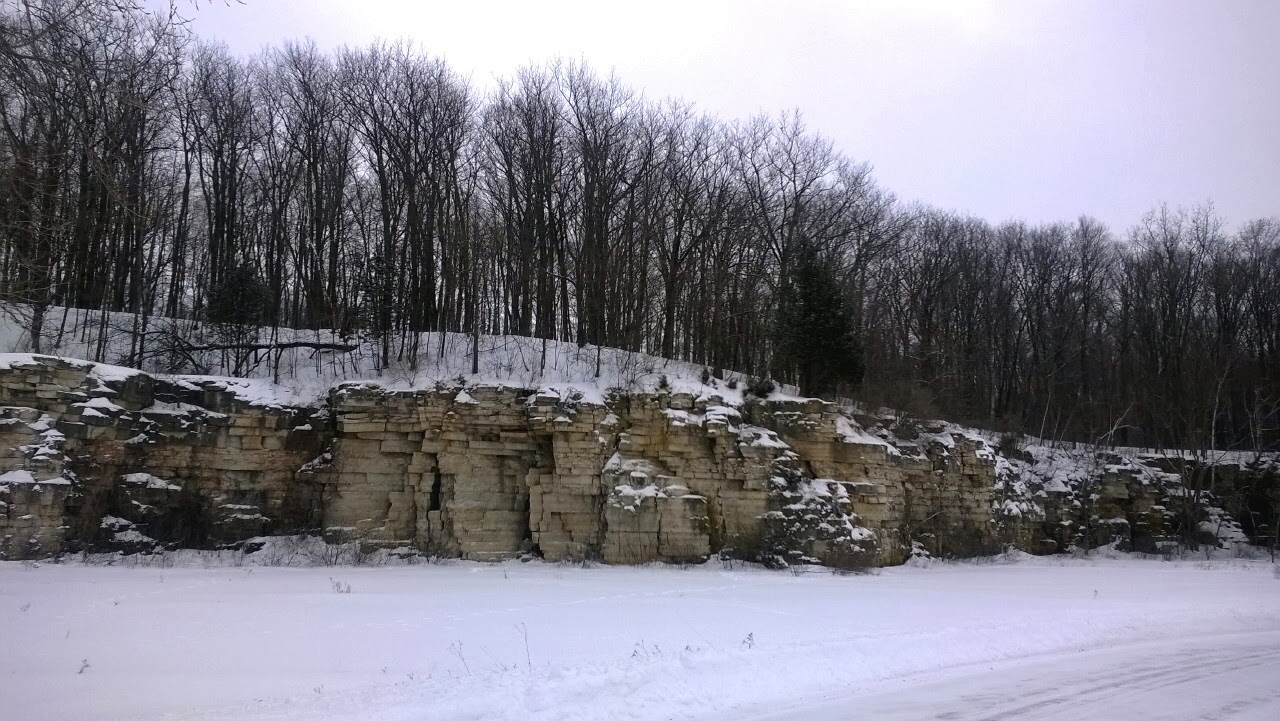 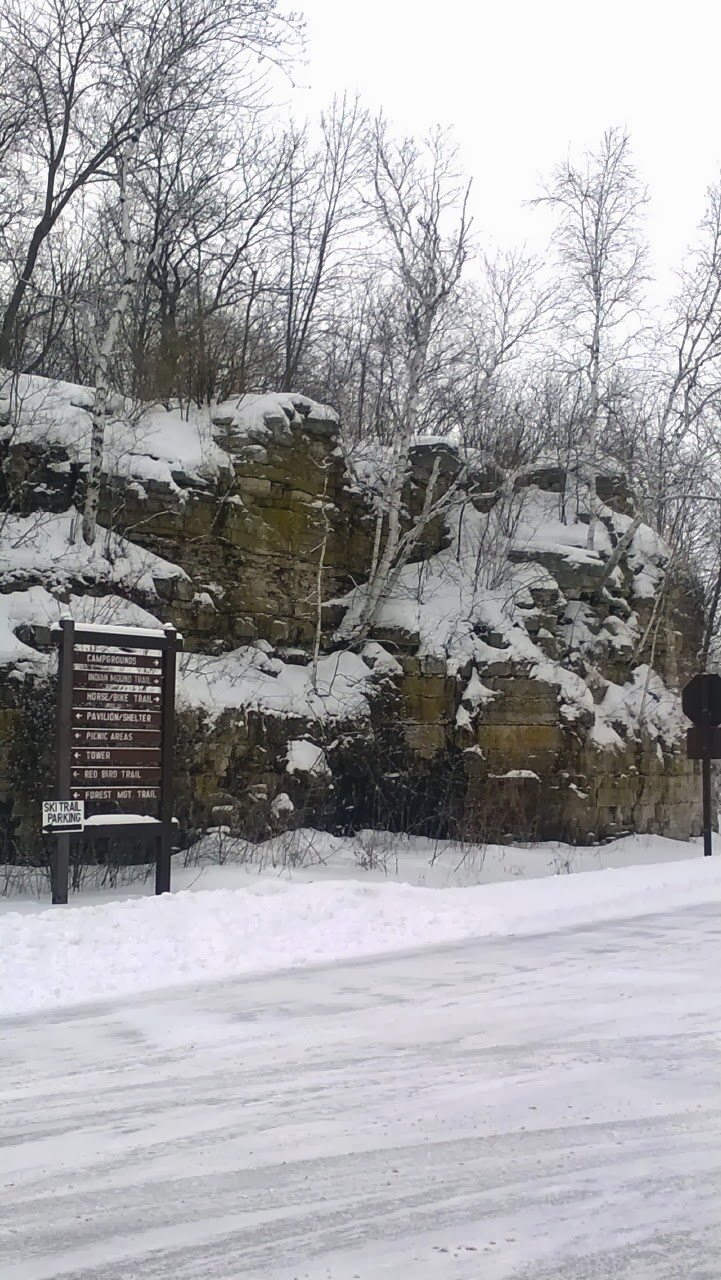 The road down along the cliff of the Niagara Escarpment was especially slick.... I went slow! 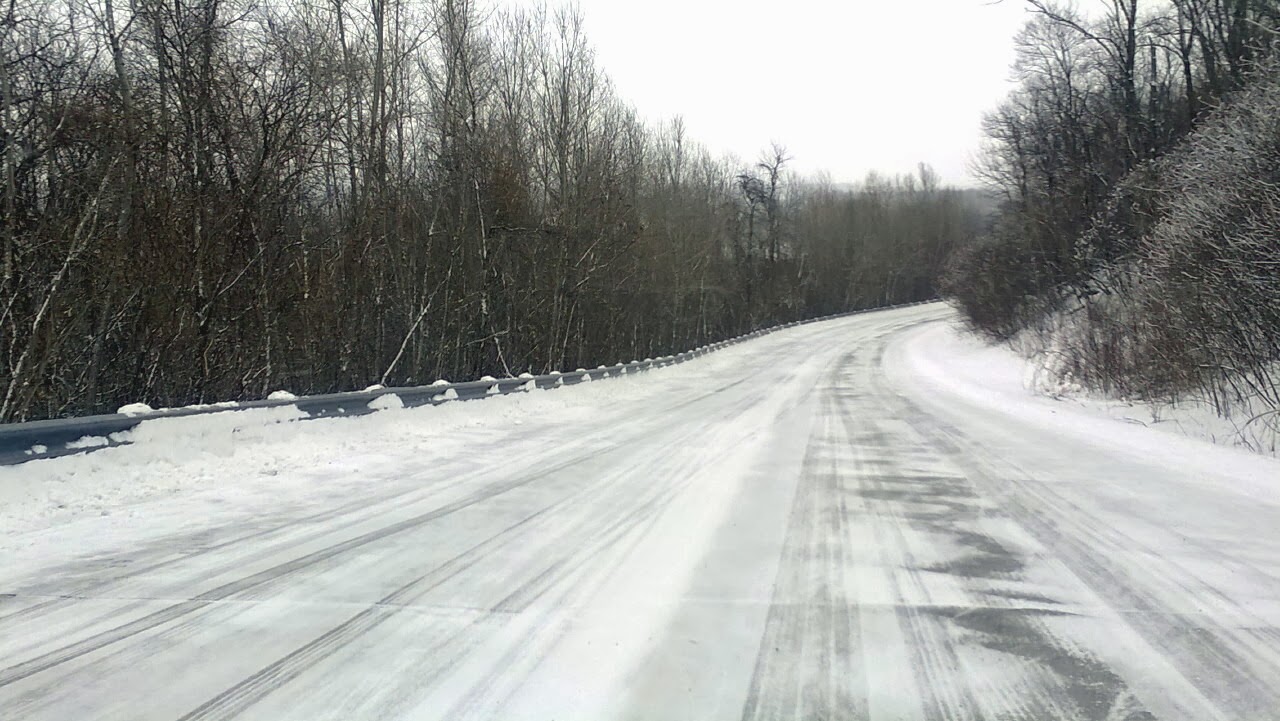 Linda had all the food set up,
and various Rangers, Staff, Friends of the Park Board, and DNR Wardens attended. 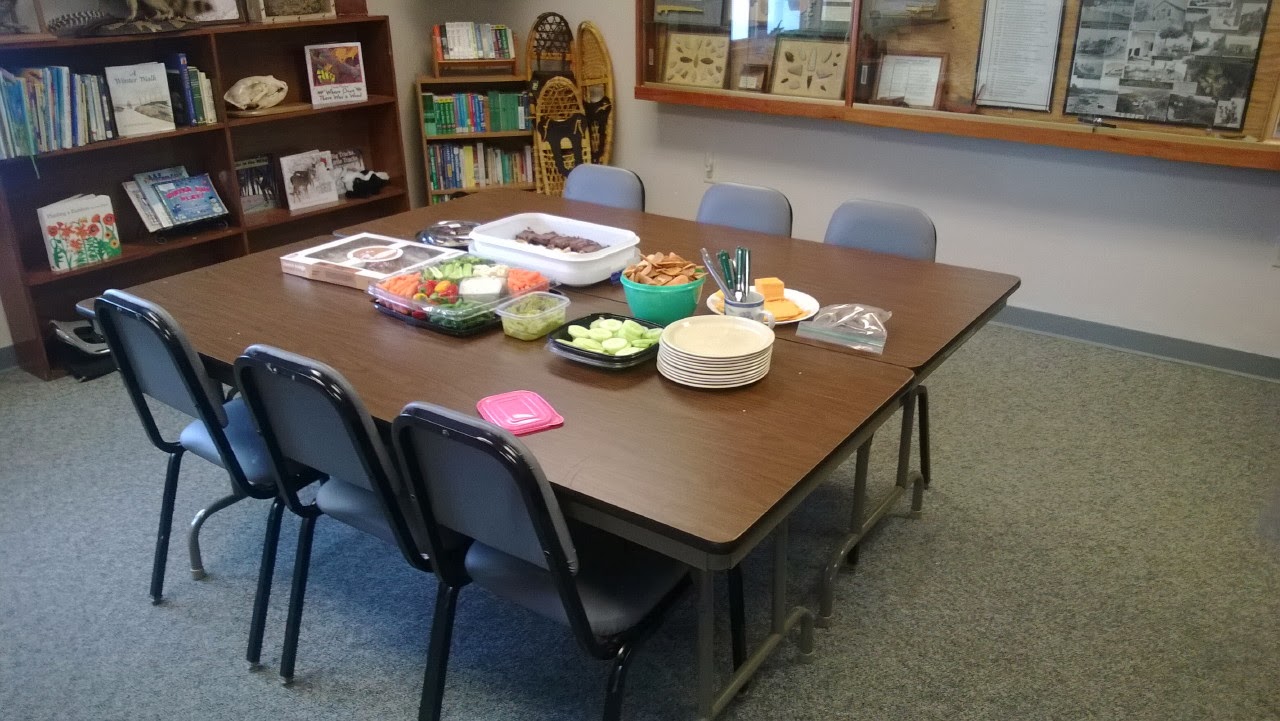 A lot of good natured teasing went on,
along with hilarious stories about situations in the park over the years.

(Rob is the guy between the two gals,  with the hat on) 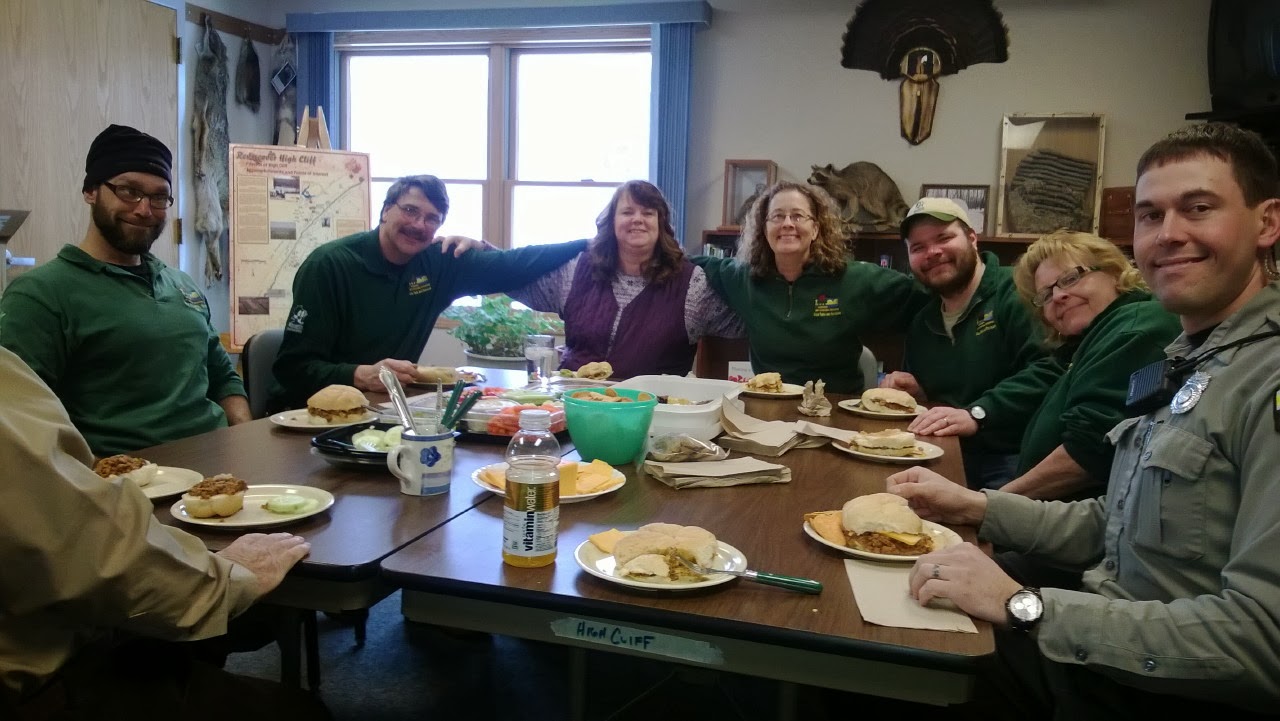 What a nice crew to work with, and with my being a campground host last summer,
it has let me get to know all of them too! 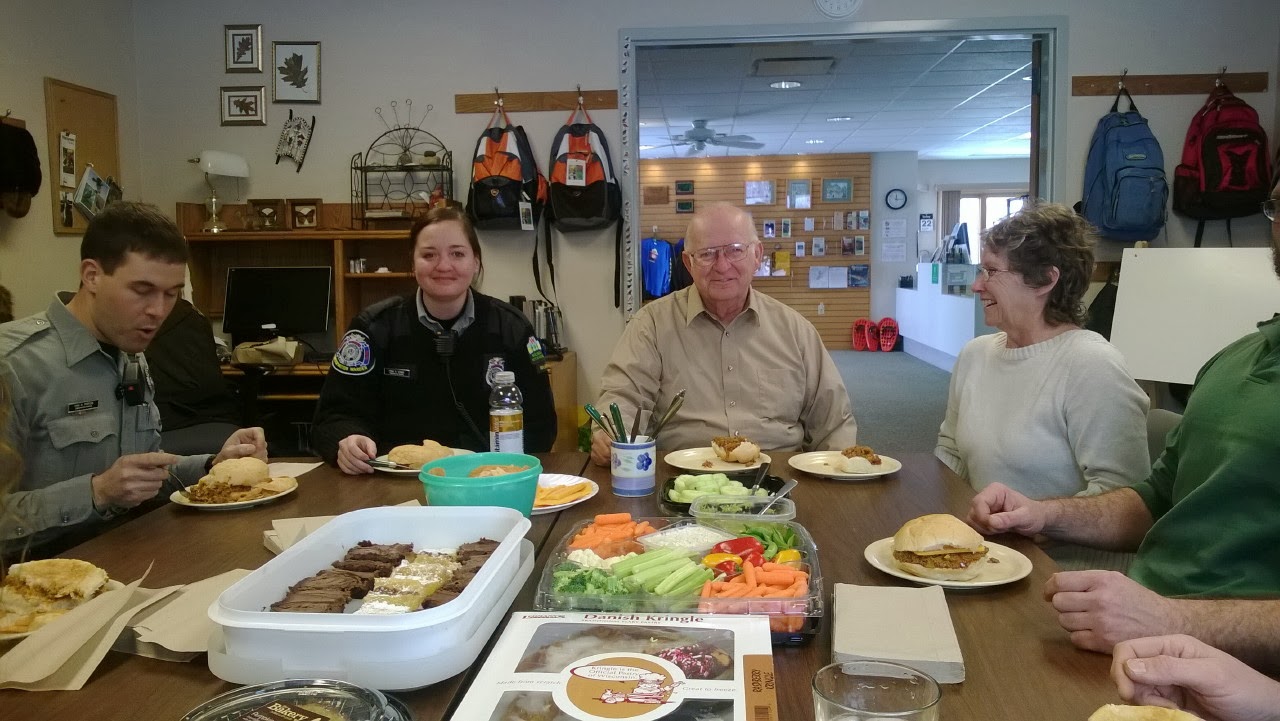 The party was wonderful, with presents for Rob's going away.
(some were joke gag gifts with special meaning) 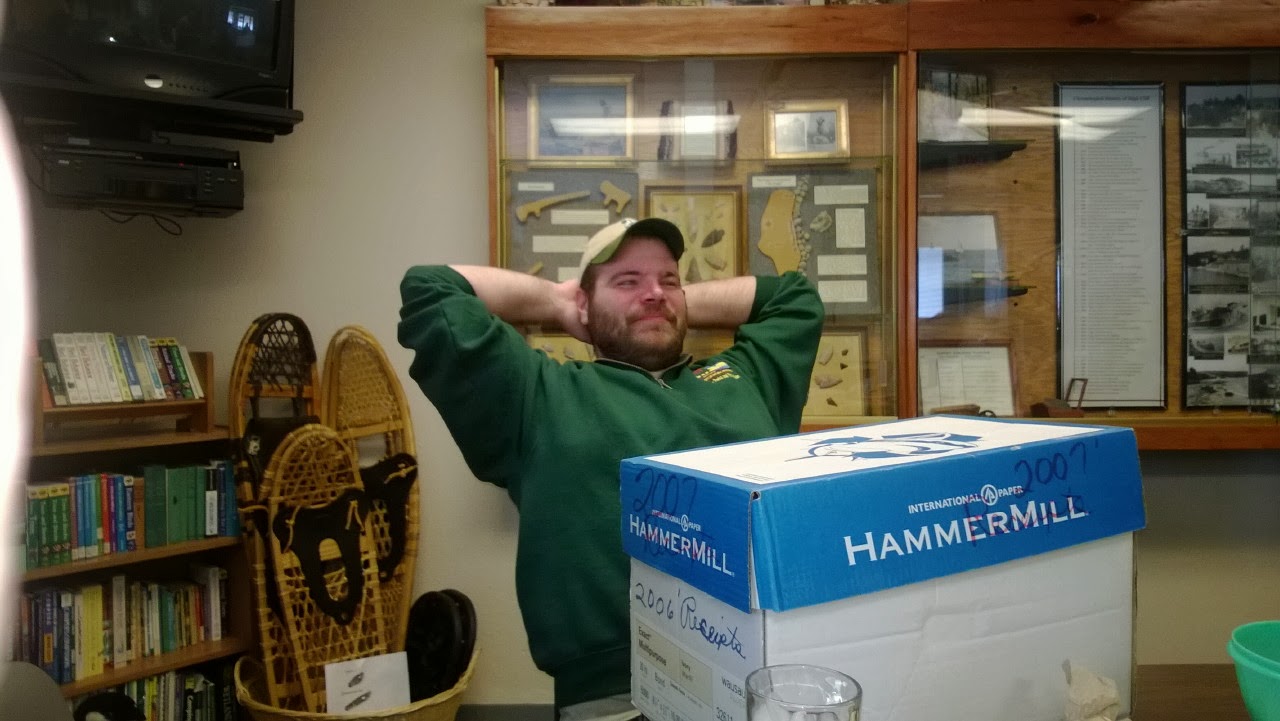 Yup... he even got some wool socks...
wonder from who? 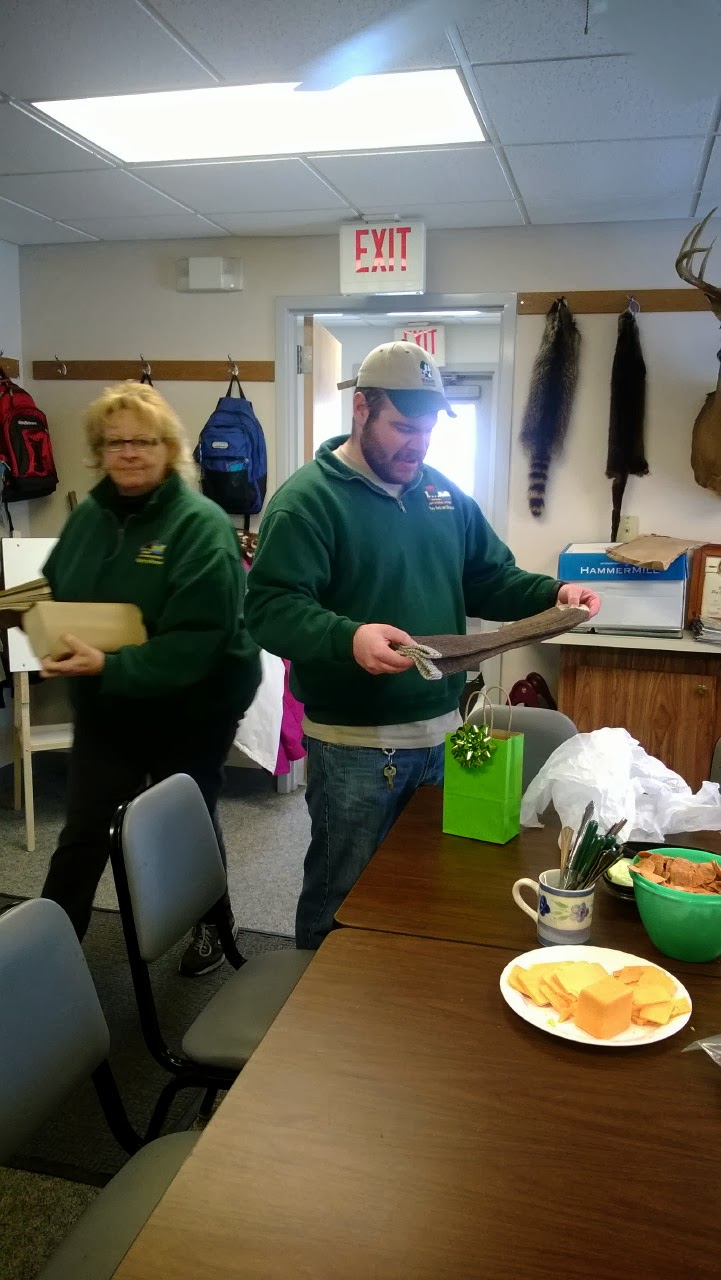 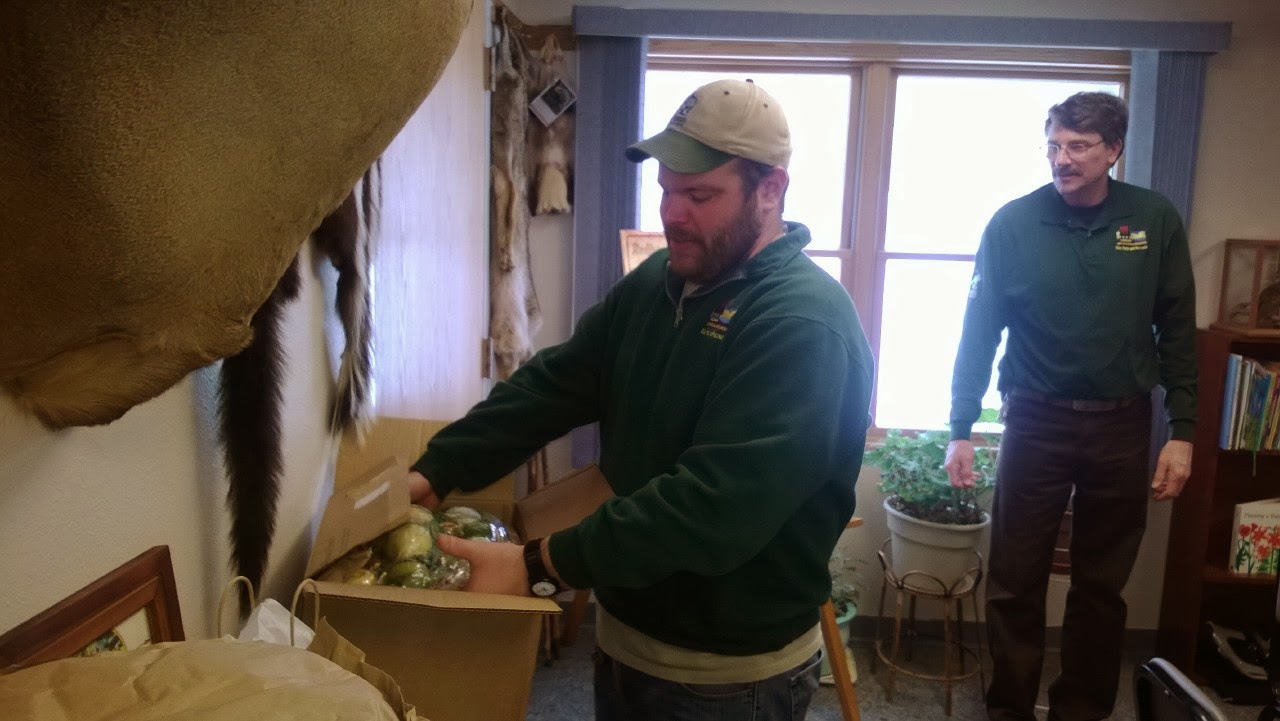 On my way driving home, the roads were even worse.  Seems the deep cold temps don't allow the "brine" that is spread on the roads to work properly.  The roads were very slippery with the winds blasting across them which can create patches of what is called "black ice". Very treacherous.

I came around a sharp curve on Hwy 114 to see a gal's car propped up on the high snowbank at a 45 degree angle, nose down, butt end up.  Two other cars nearby were in the ditch too....  as I slowed down, I was slipping along too.  Whew!  It was icy!  I have driven a lot of years in snow and can manage pretty well, but this icy stuff is dangerous and best to get home slowly and carefully.  Some folks just don't know how to slow down, so they end up in the ditch like that gal did.

Here is a little video clip I made by setting my phone on the dash...  for all of you transplanted southern folks who miss driving in this stuff!   heh heh
(it looks fast but I was really driving pretty slow)

My plan was to go home, let out the dogs to go potty one more time, then pack up my sock knitting machine.  I was supposed to drive 40 miles north to Green Bay and help a couple gals with some sockknitting machine glitches and hang out for the rest of the afternoon knititng socks.

Wellllllll  as I stopped at the post office to mail out a box, I felt the car slip a little bit as I parked it on the sloped road.  Ooops.. slippery???   So I backed it up a bit and not let it be parked on the slope.   I carefully shuffled my way into the post office, did my thing, and shuffled back to the car.  I tried to drive away, and instead I was slipping sideways down the hill!  ack!!!!!   I am soooo glad there weren't any cars around to hit!    I bumped into the curb and snowbank at the bottom.   I tried to drive back up, but nooooo gooooo  it was all icy!  I turned around and drove around 5 or 6 blocks to a less sloped road to get back home.  Whew... safe and sound in the garage!

Then I looked up the road conditions on line and saw how awful the roads all were, and accidents all over!   Guess who wasn't going to Green Bay???   I stayed home and cranked socks all by myself instead.   Here they are, scrap yarn still in because the toes are not closed up yet.  Then the turquoise scrap yarn is unraveled off the completed sock.

Steve made it home okay from work,
because he had the 4 wheel drive Tracker.

We stayed in for the rest of the night,
cozy and warm and avoiding this 20-30 degree below zero wind chills......

Posted by KarenInTheWoods at 8:22 AM