Another Weekend Around This Old House

We spent the entire weekend alternating between projects and relaxing and also watching a VERY tense Packer Game on tv today.  (overtime tie!)

Some of the projects around the house needed to get done.  First on Steve's list was wrapping all the hot water pipes in the basement with foam insulation, and then Steve stuffed some extra insulation in between the floor joists here and there where it needed it.  Now that the furnace is running (our temps were at 5 degrees this morning with wind chills below zero)  we did a few things to make the house more airtight.  Steve added some foam and insulation around the attic trap door, and around the edges of the upper door leading to the shaker porch.  No more drafts!

I spent some time down in my workshop in the basement.  I got another batch of sock machine weights dipped 3 coats in Tool Dip (rubberized coating)   They are one pound deep sea fishing weights that I order from a place out on the west coast.

Steve hammers down silver forks flat and bends over just the tips of the tines.  Then he drills a hole in the end of the handle.  From there, I add the weights with split key rings.  I sell them in sets of three to circular sockknitting machine people who use them for holding tension on the heels and toes as they knit. 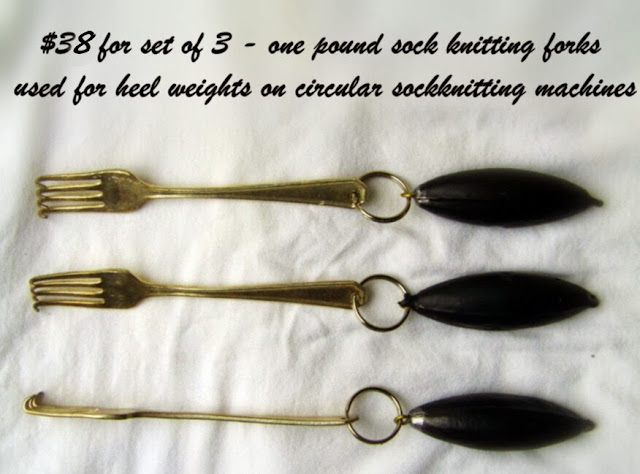 Steve happened to find an old fashioned lock box unit for inside the door of the Munchkin toy closet. The old fashioned door knobs themselves were fine, but the inner workings (box) was broken.  He drilled out the old one and inserted the replacement... it needed a little bit of tweaking... and now the door shuts properly! 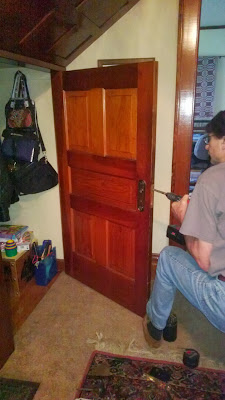 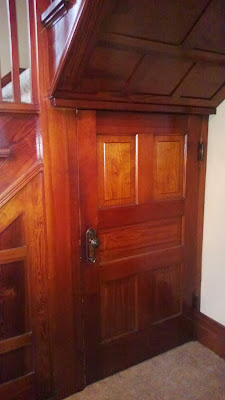 There has been a project on my mind for quite some time... so I got Steve to help me tackle this one.  The diningroom originally had a built-in hutch that we moved into my Loom Room when we bought the house.  The carpeting had been installed around that hutch, so after moving it, all that remained was the unfinished hardwood flooring underneath (YAY!  we know that we have a hardwood floor in our diningroom if we ever want to rip out the carpeting!)     Our new buffet sets in the same place, but it was kinda setting down in the open gap, and I didn't care for the looks of that.

The buffet is very, very heavy so Steve helped me put it on those sliders called "Moving Men" and we moved it up and out of the hardwood gap on the floor.   Those "Moving Men" are GREAT!   We have used them for so many things, now that we are not as young and strong as we used to be.  (grin grin) 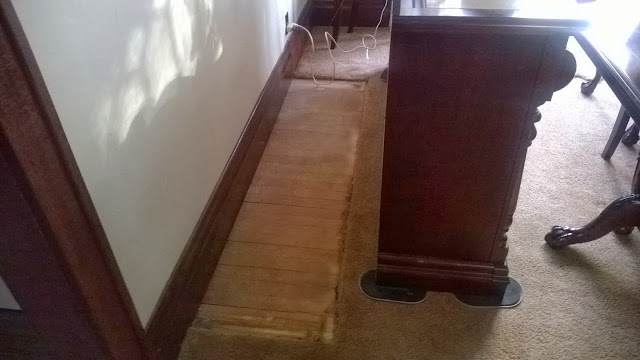 Steve cut two boards for me that would fill in the gap, and I stained/poly'd them in the basement.  I only needed to stain the edges where it would show.   Once the boards dried, we carried them up and slid them into place, nicely filling up the gap! 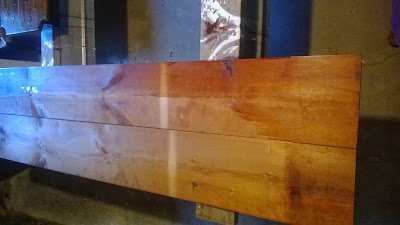 AHHHHH that looks MUCH better now! 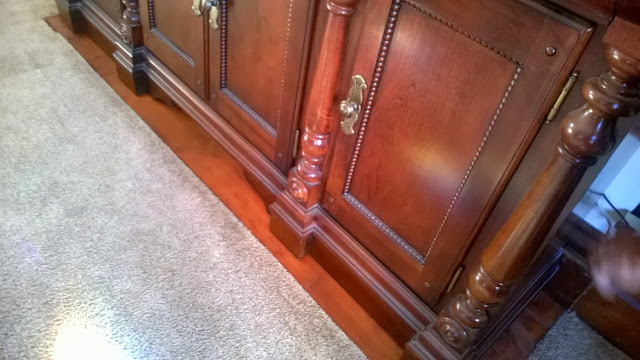 Seeing as I had out my staining brushes, I also added a coat to this old clock.  Steve's dad had refinished it years ago, but it was more brown and satin finish to the wood.  I added a bit more reddish poly/stain and gave it a bit of a shine. I cleaned the pendulum disk and found out under the dull brown it was a lovely copper or bronze! 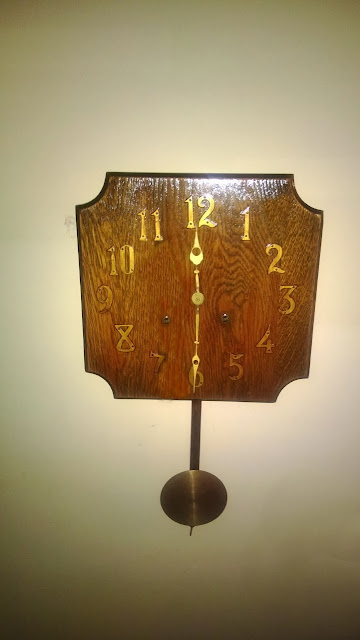 It is now hanging in our foyer, but Steve forgot to get the key... so we have not wound it up yet.  We will be seeing Pa Pfundtner on Thanksgiving, so I hope we remember to ask him to bring the key to dinner!  LOL

Also on Friday, Saturday, and Sunday was the big Open House fiber event at Hidden Valley Woolen Mill and I brought out four baskets of inventory to be sold on commission in the shop. I had an array of quilted hot pads, woolen socks, and knit winter hats. 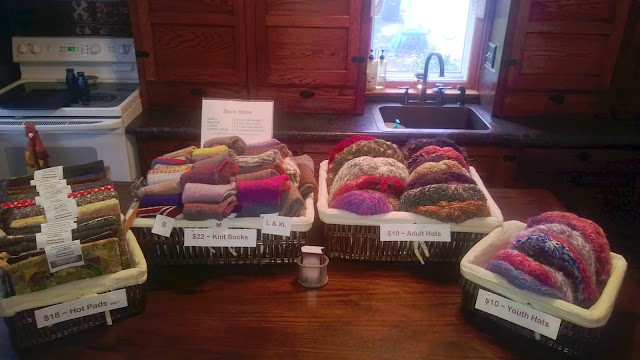 Remember a couple blogs back I wrote about making felt
from sheep wool at Hidden Valley in our guild meeting?
Well, I took my sheet of felt I created and made this clutch purse and added it to the sale.
Don't know if it sold or not till I talk to Carol tomorrow. 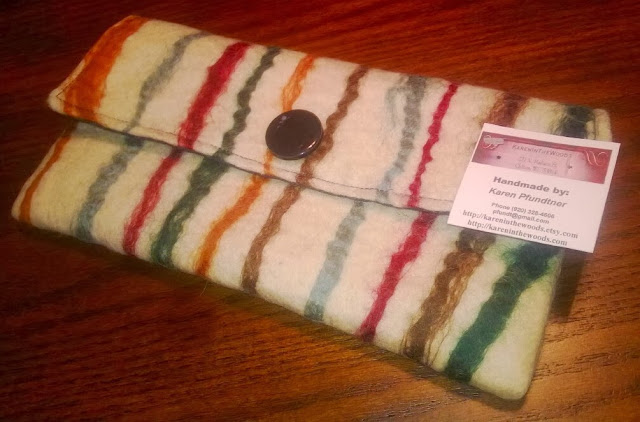 During the very very tense Packer Game on tv today,
Steve was sitting in his chair and hollaring at the television.
I hung out in the dining room and set up the Janome sewing machine to do some quilting. 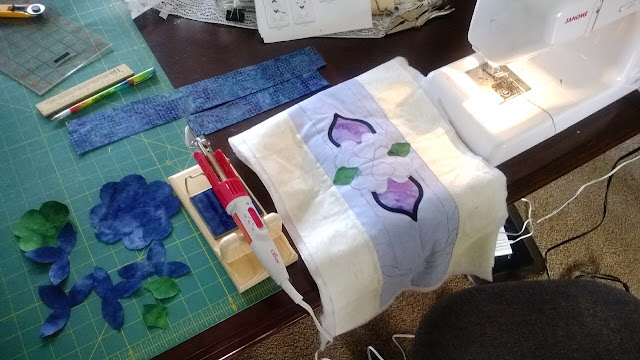 This is a kit from Nancy's Notions that had patterns for four different stained glass looking quilted wall hangings.  But there was only enough fabric in the kit to make two of them.  I had originally done the first two hangings from one of the patterns so they match.  They are hanging in my livingroom on each side of the big window. 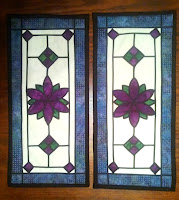 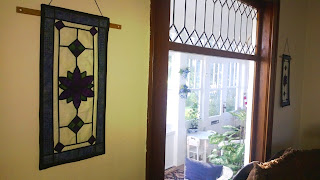 I wanted to try out some of the other patterns in the kit.  I had some extra fabric to add to the leftovers from the first ones and I had bought two more rolls of the thin black bias tape to sew in between each colored section.

Here are two more that I did today during the Packer Game.
They still need the black binding around the edges. 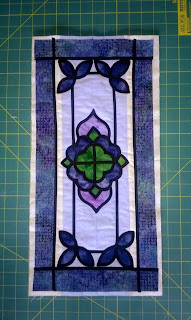 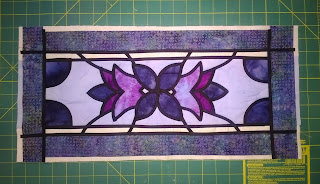 I am working on one more of the fourth pattern yet tonight, and might finish it up tomorrow.  I might hang one up behind Steve's chair on the other wall.  Then perhaps the other two will be runner mats on our endtables?  I didn't know when I made them what I would do with them , just that I wanted to make them.  LOL There are enough scraps now to make some matching coaster for the livingroom end tables. The ones we are using now I made for the motorhome and should go back out there.

Wednesday I am taking grandtot Jameson because he is off school and is coming to help me with a project.   Plus, he gets to spend the night!

Thursday we will take him along with us as we trek over to Waupaca, you know----  over the river and through the woods...  for Thanksgiving with Steve's family.  We will meet up with our kids there for the celebration.  Then Heather and Jesse will take Jameson home afterwards.

Friday I am taking Chelsea and Clayton to watch them because their day care is closed for the Holiday weekend ... One of the busiest days of the shopping year for Erin's stores, so she has to work.  Plus it's hunting season so their daddy Mark will probably be in the woods.  We are keeping them overnight here too...

Saturday we will take those grandkids with us up to Green Bay to attend granddaughter Allegra's fourth birthday party!  Oh my.. four years old already???  Seemed like just yesterday--------