After a whirlwind weekend (checking out the father-in-law's new Rexhall motorhome on Friday, the sad funeral on Saturday)  we wanted to get back into our house re-doing projects on Sunday.

Steve found this wonderful island on Craigslist before we even officially owned the house.  It matched our kitchen cabinets that I was refinishing at the same time.  Once we got them all in place, we were very satisfied.

Now it was time for "Phase Two" of the island idea....   to move the dishwasher from the pantry room into the main kitchen and hook it up underneath the open space in the island.

First he had to remove the dishwasher from the panty... he already had the makeshift cabinetry that surrounded it off... and was just unhooking it from the plumbing and electrical when I snapped this pic. It had been crammed in the pantry next to the fridge.
Now that both are moved out, this will be my first floor laundry area and
I think my ironing board will set perfectly in this space.

This is the space between the two end cabinets in the island.  The plumbing and electrical fixtures to run the dishwasher are easily accessible in the basement room right under the kitchen. All Steve has to do is drill through the floor and run up the water line, drain pipe and electrical wiring. 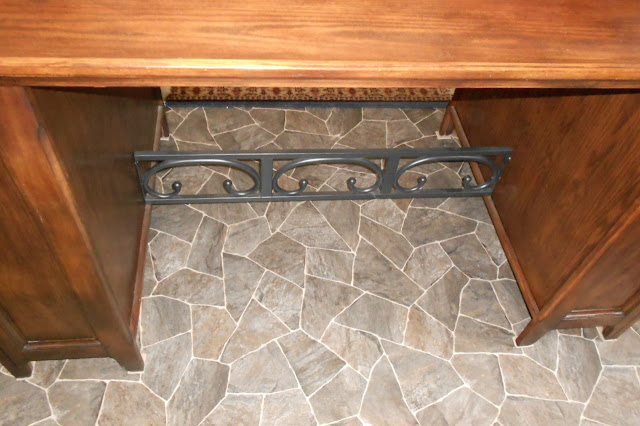 First he removed the decorative iron bar from between the two side cabinets.... 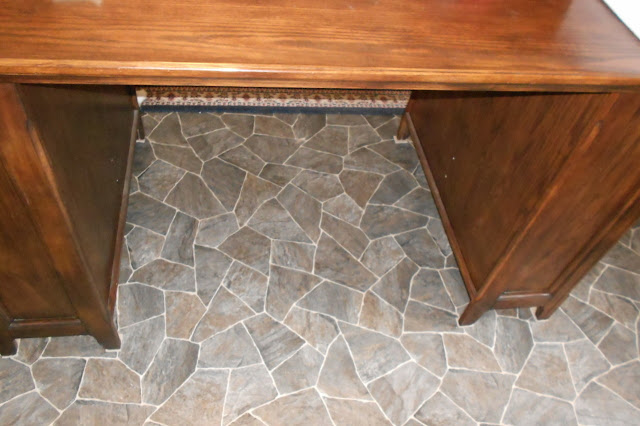 We carefully slid the dishwasher unit over on those sliding disks called "Moving Men"   That way the metal legs and frame of the dishwasher didn't put gouges or marks into our new flooring. We knew it was the right height ahead of time, and only had to adjust the legs down about 1/4 of an inch! 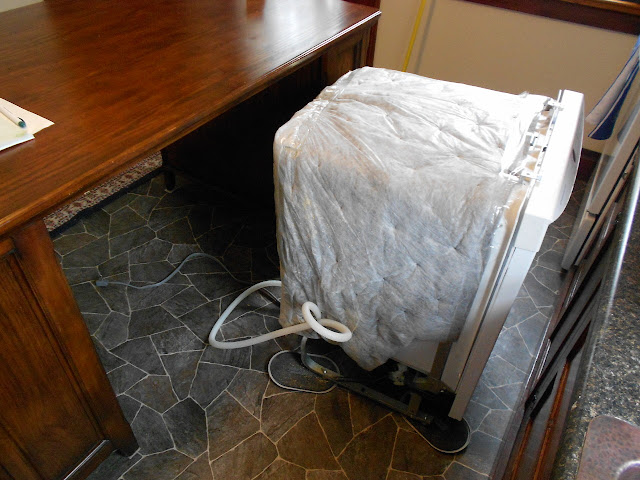 Steveio got right into the hookups, and drilled the holes and fed up the lines and hoses.  He is in his "element" when working on projects.  Oh, P.S. this was all done before breakfast on Sunday! 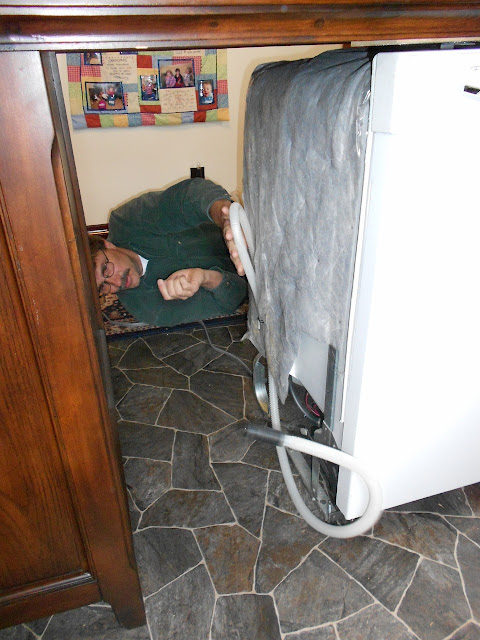 Soon the holes were drilled and he did all of the hookups to the plumbing in the basement.  He mounted the dishwasher into the undersides of the cabinet and also down through the brackets tight to the floor. 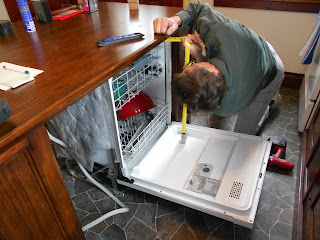 We ran a test load and everything worked fine.  We used an extension cord to plug it in temporarily. He held off hooking up the electrical wiring because I want to put a few outlets into the underside of the island.  So I have to decide where I want the outlets mounted to the underside of the island countertop.  Those outlets will be perfect to run my sewing machine, toaster, blender etc.   I love how close the dishwasher is located to the dishes cabinet... I can just reach into the machine and set the dishes right into the cabinets! 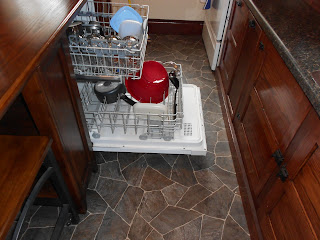 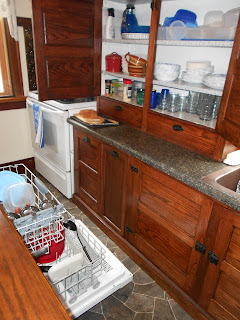 Now, here is where the decision comes in.....

The FIRST plan was to construct some up and down slits to store my serving trays and cookie baking sheets in the space left between the dishwasher and the end of the cabinet.   Okay.  That sounds good.  Or he thought we could make another pull out bin like our trash bin... and use it for recycling?  That was a good idea too. 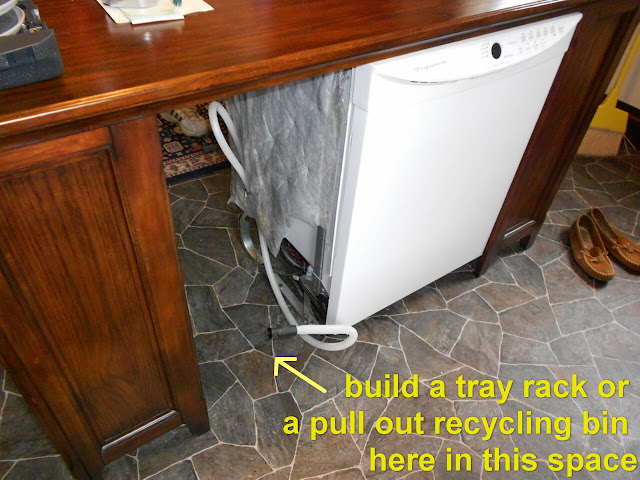 till Steveio came up with a SECOND plan!

He detached the cabinet on the far left end of the island and scooted it over tight to the dishwasher!   Now there was no need for a lot of intricate panel work or cabinet building.  (hmmmmm)   and he thinks the dishwasher looks more custom made into the cabinetry? 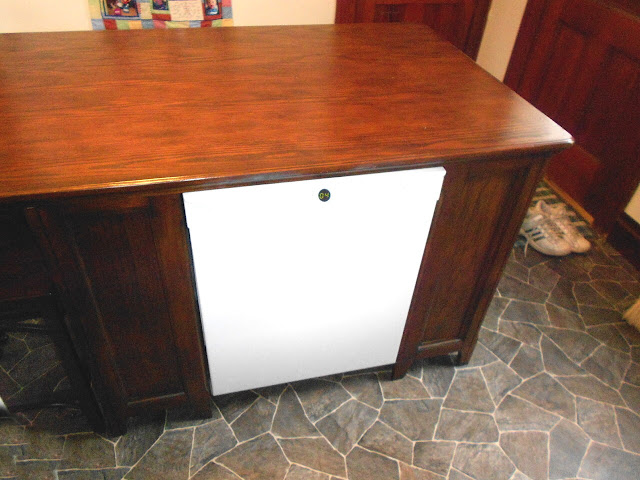 Now, two of the stools can be slid under the overhang from where the cabinet got moved in from.  You can still access the shelves underneath if you pull out the stools a bit.  So I can still store stuff in there. 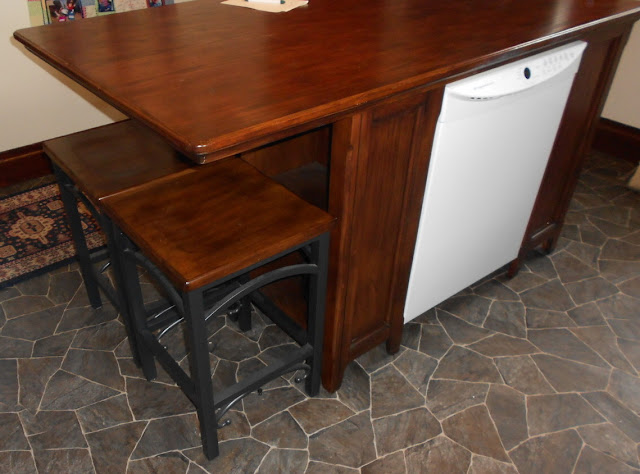 And he said it will be easier to close in the back panel behind the dishwasher, and there will still be a bit of access for knees if we put one more stool over there on the side.  (the island came with four stools)    I think he is leaning towards this configuration... while I am liking the original plan. 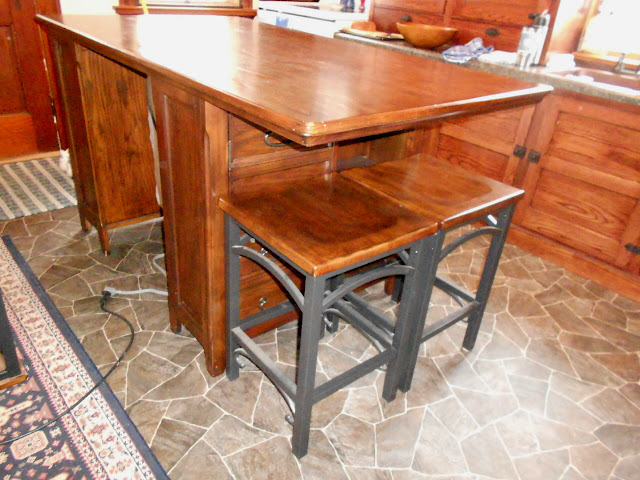 Of course, I got my window and my cabinets and my sink the way I wanted them....
so I guess he can have the island the way he wants? 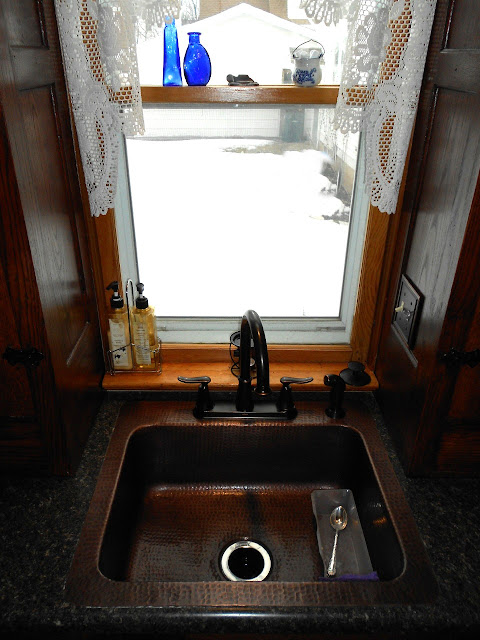 Also, a shout out to my barista gal, Sarah, over at Terre Verde coffee house
http://www.terraverdecoffee.net/
who kindly took care of my coleus plants while we were gone!
She did a GREAT JOB!!!  My plants are growing more vitally and energetically than ever!
They are waiting to be planted out in our yard in later May, when the danger of frost is passed. 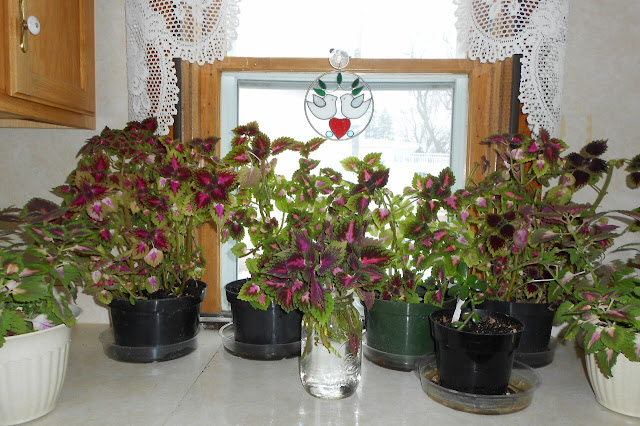 I have kept these same coleus plants going since my friend Connie gave them to me back in the early 90's when she bought her house on Birch Street in Green Bay.  I dig them up in the fall and bring into the house all winter in pots.   Sometimes when they get too rangy and long, I snip off the long ends and re-root them in jars of water (see in the center?)   Then by spring, I have more and more plants to put outside.  Or give to friends.

Last summer when we sold the house, I thought I was done and through with carrying on these plants.  I had given some of the plants to two of my friends, Paula and Juanita.  And I said goodbye to having them anymore because we were planning to be full time in the motorhome.  I only kept one african violet in the motorhome over the winter.    I thought it was an end to an era for my coleus.

But those friends, Paula and Juanita, when learning in the fall that we were house hunting, they each raced out to dig up those plants before frost set in!   Paula had passed them on to a friend who dug them back up and gave them to Paula to give to me!  Juanita went out 2 days before a killing frost and got them all dug up from where they had been planted by her studio, and replanted into pots to save for me too!   As soon as we got moved in the house, I got my pots of coleus back from my friends to winter over again.

And the tradition goes on.... Posted by KarenInTheWoods at 10:56 AM