We found a signal tonight at our campsite further north of Del Rio, so with the help of my Wilson Antenna Booster, we are able to get on line!

With all the great help from our Safari group friends, and Ralph Andrews who knows these rigs inside and out... we were able to do a brake job, while on the road!

Steve got some of the lug nuts loose while at the campsite, but decided to drive the whole motorhome into Del Rio to a tire place to get the rest loosened. They kindly offered their empty back lot to park in to do the work!  The nice guy named Travistino (sp?) came around back with his service truck and loosened up the last few lug nuts for us.  Look at this Big Boy Tool! 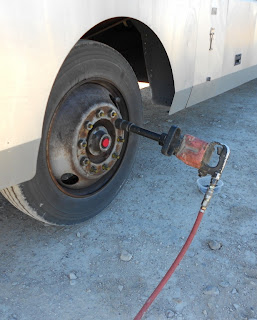 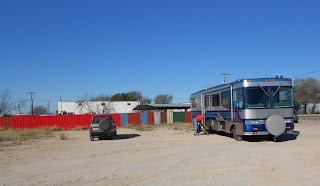 Then we went to work.  First we had to jack up the motorhome on the front leveling jack till the tires cleared the ground.  We stacked up heavy wooden planks under the axle in case the front jack gave way.  Never hurts to be safe.  Then Steve was able to remove the driver's side tire and get to the brake system.

He removed the top retaining plate which the bolts came out easy enough. Then he was able to remove the tensioner spring. 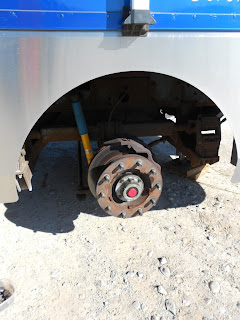 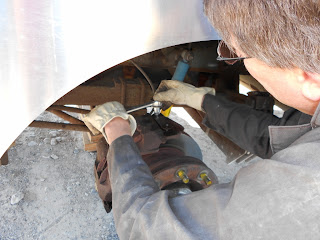 He tapped lightly on the "keeper" pins?  Not sure what they are really called, but that is what Steve calls them.  He used a hammer and a tip of a chisel to lightly tap them loose and slide free. 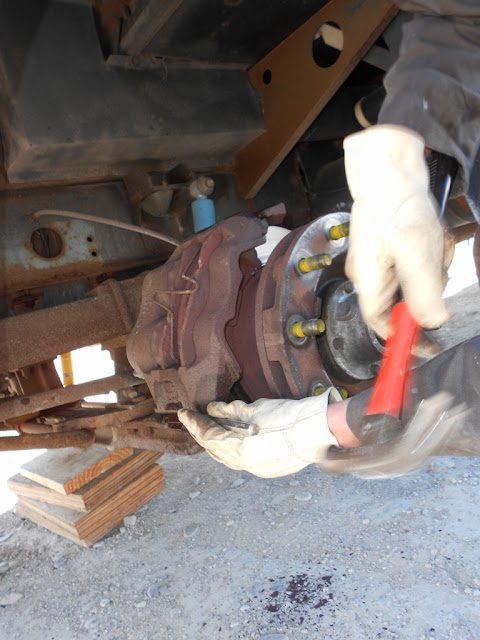 Next he used a very large C clamp to compress the caliper cups and was sure to open the top of the brake fluid reservoir to let out any excess fluid from compression. 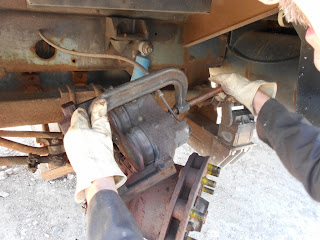 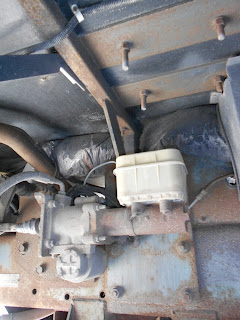 Steve said to note in the picture on the left, his reinforced top of the shock absorber mount that he repaired after it broke last summer.  He super duper welded it and made it even better than before. Steve noticed in New Orleans on Eric's rig, his has been repaired too.  So it must be a common problem on Safari's with the Velvet Ride?

Back to the brake job-----  Now he could take out the pads from the caliper.  They almost fell out into his hands.  The caliper itself looks good, but needs some rust removal along a few edges. 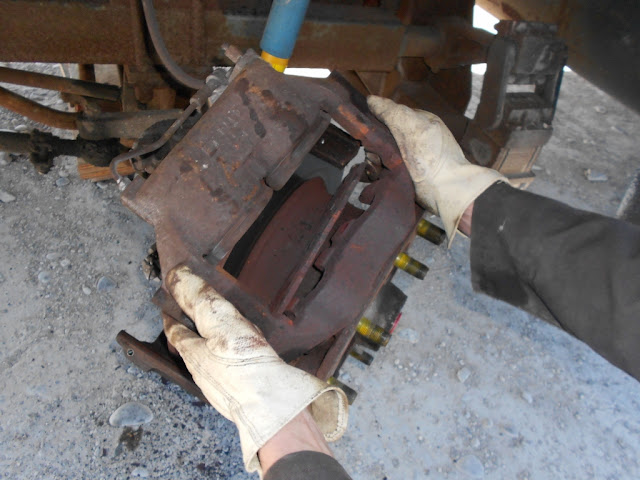 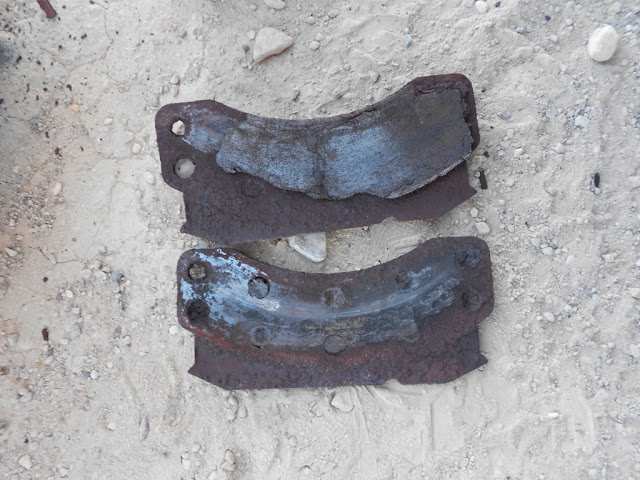 The rotors appeared to be in very good shape, so we were lucky to do this pad replacement job now, and not later when they would have become more worn and damaged the rotors.

Once he got the brake pads out, he took them with him.  He hopped in the Tracker and went over to NAPA on the north side of Del Rio where our new ones had come in on the truck an hour before.  Amazing--- we ordered them at 4pm yesterday and they were on a truck ready for us to be picked up by 8am the next morning.  What good service!

Here is the part number that NAPA used after cross referencing the numbers we got from Mel, John and Ralph.   Steve was told the pads are actually the ones made by Bendix for the Ford Truck braking systems.  That is good to know too. 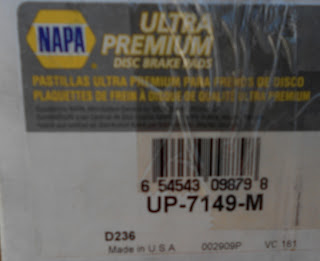 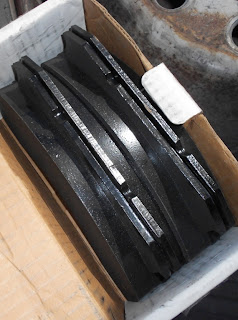 Steve matched them up at the store, and they were a perfect fit!   They cost $130 for both front wheels, and he also bought a bottle of Copper Never Seize for $10.   Soon he was back at the motorhome and ready to get to work.

Out came the rest of his tools and he set to work.  It was fairly warm in the low 70's so his brown overalls were needed for protection while he worked, but soon got hot in the sunshine.

Before reassembling any of the brake parts, he used the generator to power up his grinding tool.  The wire cup brush took off any excess rust and cleaned up all the parts nicely. 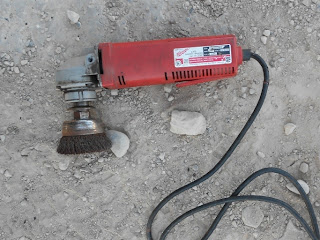 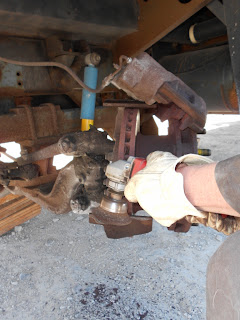 I was the gopher and the wheel turner and the tool hander and the picture taker!


Then he dabbed the brush of Copper Never Sieze on each piece that needed it, including the keeper pins (if that is their name?) 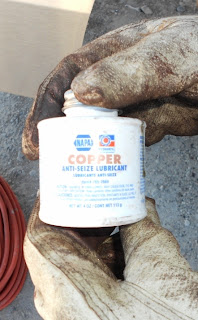 When assembling the caliper unit back together, you have to be sure to get these two metal discs in the right place inside of the cups before setting the pad into place.  You need three or even four hands to do this, especially if you keep the brake line attached like Steve did. 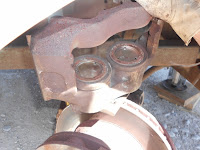 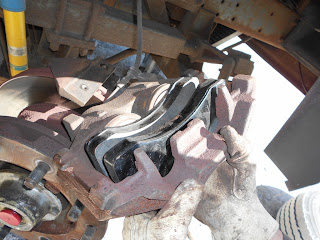 He gently tapped the keeper pins back into place and also coated the saddle groove they rest in with the Copper Never Seize too.  Once the whole caliper assembly was together, he was able to slide it back on over the rotor disk and bolt it all into place.  He even put the Copper Never Seize on the bolts that held that retaining bracket in place too. 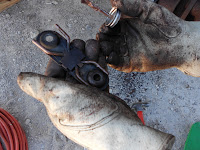 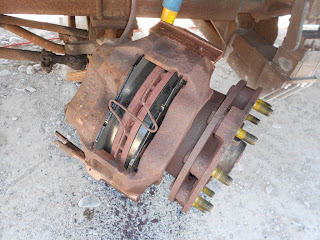 Now.... he did the same thing to the passenger side as the driver's side... both front brakes were serviced.  What a job!  In a parking lot in a desert city with all his tools on board. What a guy!   See why I keep him around?

It was time to put the tires back on, and lower the jack a bit till the tires were snug to the ground. 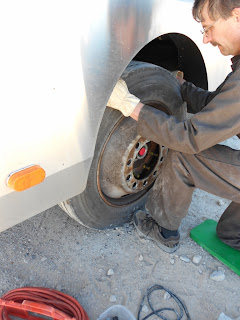 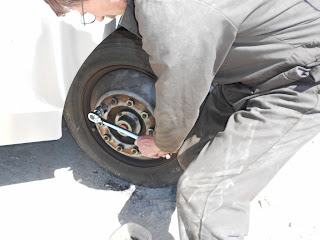 Bit by bit, he tightened up the lug nuts with the torque ratchet to 170 ft pound as high as it will go.  After we drove it around to the front, the nice guy Travistino tightened them up to spec 500 ft pounds with his torque bar on air ratchet.   Steve estimates it was about a two hour job to do both front brakes. We saved a LOT of money by doing it ourselves.


Now my job was to bring the man a nice cold glass of lemonade! 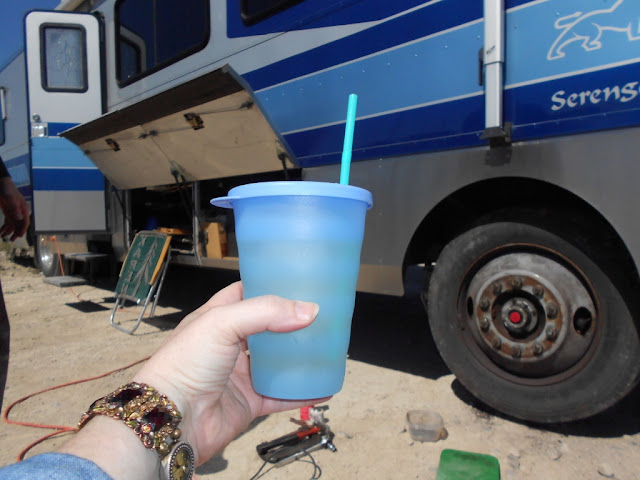 After he was all done, he was ready for a shower, by golly!   So he took one, right in the parking lot in our motorhome.  In the meantime, I stopped back around front to the office of the tire place and thanked them for the use of their back parkinglot to do our brake job. They smiled and said no problem. I talked with the owner a bit, a nice woman, and gave her $30 to order some pizzas or donuts or something for the three guys who work there. With a nice wave from Travistino, we were on our way!


I ran a shipment out to the post office of the things I sell  (I tell ya, my work never takes a vacation)  and then I ran the poor Tracker through a car wash and picked up a can of freon for the Tracker air conditioning system.   It needed a recharge, so Steve took care of that before we left the lot.

Once back on the road, I raced ahead of him, going north on Hwy 90 in the Tracker while he followed slower and stopped for a fuel up... $3.99 a gallon to top off the tank with only 25 gallons.  As we head further west, we don't want to be stuck being too low on fuel.  I drove up past the visitor center to the northern part of Amistad National Park Recreation Area to the furthest north campground of the park.  I went ahead to make sure it was on a good road and a good campsite was available.  I called back to Steve on the cell phone as he drove north and gave him the go-ahead to keep coming.

I will post more pics of the great campsite we have in the desert and our cool new Australian neighbors in tomorrow's blog.  This one is getting tooooo long!


Posted by KarenInTheWoods at 9:21 PM