What day is it again?

hmmmmm  Saturday?
Noooo It can't be, they didn't have the Farmer's Market set up.

hmmmmm  Thursday?
Noooo  that was on the blog yesterday

oooooooh
it must be FRIDAY!

There goes that Vacation State of Mind, forgetting the day of the week again.  And I wouldn't even know the date unless I look down in the corner of my computer screen.  Sigh.... such a problem to have, eh?

We woke up LATE....  it felt good to sleep in, and the dogs left us alone and waited patiently for being let out and walked till after 8am.  My oh my that was a good feeling.  It's been hard to transition them from 4:45 a.m. from Steve's old job alarm time to 6:30 a.m. for his new job alarm time.  Now vacation time has them ALL CONFUSED!

After sipping coffee and eating cereal, we figured we would wander over at 9am to talk to the staff about the laundry machine malfunctions last night.  Did I ever tell you how much I HATE laundromats???   Yes, we do have a washer/dryer combo unit in our motorhome and I would have been VERY happy to use it.  But my wise and wonderful husband has deemed it prudent to NOT turn the water on to the washing machine lines at the control station on our motorhome.  Yes, we can turn on or off certain parts of the motorhome water system and only operate some sections and not others.  He feels it will take too much effort to RE-winterize the washing machine and ice maker portions of the motorhome when we get home if there is still some freezing temps.   Nice, eh?  That means.... laundromats!

Last laundry was at San Antonio and it was a nice clean laundry room at the Travelers World CareFree Resort.   This time was a whoooleee nother story.

I went in, it was grubby, some of the chairs had ripped vinyl seats, the doors were hanging open so the bugs were coming in, and the machines looked to be somewhat in order or somewhat not...  who's to guess?   Well, I manged to find three machines that weren't too dirty, and started to load in my clothes.  At $1.75 each, I got the water running in each one.  Okay.. that's a start.   Then during the aggitation process, one sounded weird.  My oh my it only had a few inches of water in it and was ripping and grinding up my towels!   I yanked out 4 of them and put 2 in the machine to the left and 2 in the machine to the right... leaving 2 in the original machine as that is all that much water could wash.

I found a halfway clean chair and sat down with my tablet and checked emails etc.  Steve came and joined me soon afterwards once he was done walking the dogs.  He was just as disappointed with the facilities as I was.

Next ... dryers.   Loaded up my clothes into 2 of the nicest looking ones.... hung up the rest of my things on hangers that I don't machine dry.  Put in my $2.00 into each of them (OUCH on that price)  and turned them on.  Partial way through the cycle, I went to remove some of the lighter-weight items, and oh oh.... everything was just luke warm, not even hot.  Geesh!   By this time, I gave up.   I told Steve at least in our motorhome I can use the dryer portion of the machine without using the water, right?   He agreed.

We schlepped our wet clothes back to the motorhome.  I did a small batch at a time in the dryer, and by bedtime I hung up the rest on the open cabinets and door handles, and draped the king sized sheets over the front driving seats in the cockpit area.  Good enough.  In the dry desert air, they were fine by morning and we folded them up and put them all away.

That is why I went to the office to tell them about the machines and hopefully get a refund.  The guy at the desk refunded all my money, which was nice!  But he didn't seem too concerned over which machines were at fault.  I asked him again to write down the numbers of the non-working machines so they could be fixed?  He looked at me like I was being a "pain" but wrote them down on a clipboard.  Fat chance they are going to be fixed, eh?   Oh well.  I tried.

We decided to hop in the Tracker and take a nice ride around the area.  We are in the Study Butte area (pronounced Stoody Beeyoot)  and explored over towards the ghost town of Terlingua, Tx. 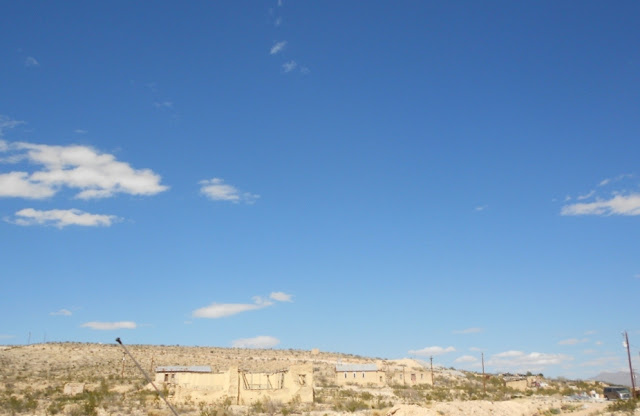 Honestly... the sky was THIS blue!

There is no enhancement on these pics 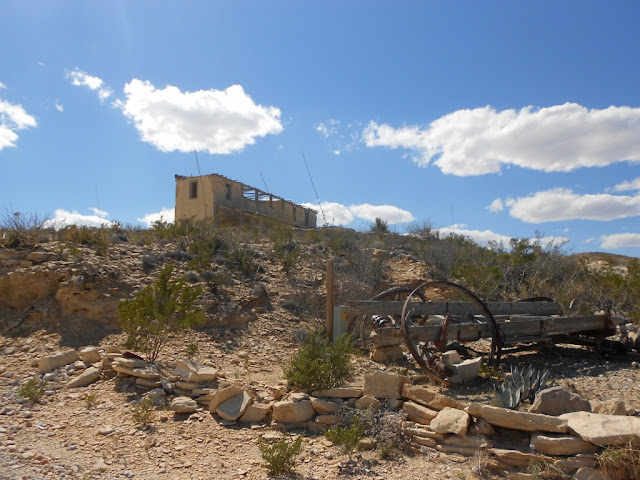 We wandered along the roads  but didn't get out and examine the
old buildings or structures left in tumbles of blocks.

It was getting pretty hot and I was not up to a lot of walking yet. 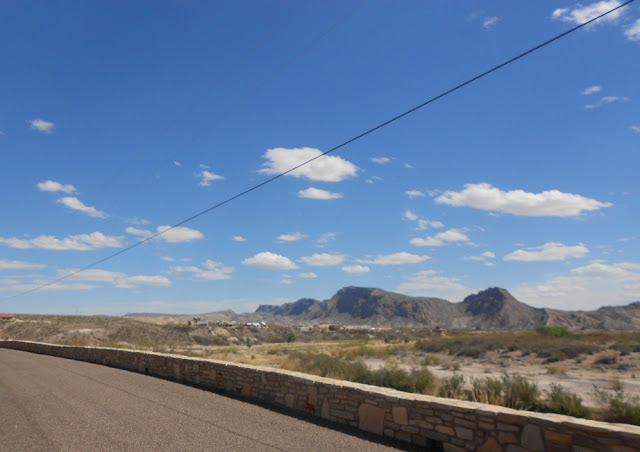 I think we will go back on the weekend,
after we read a bit more about the area 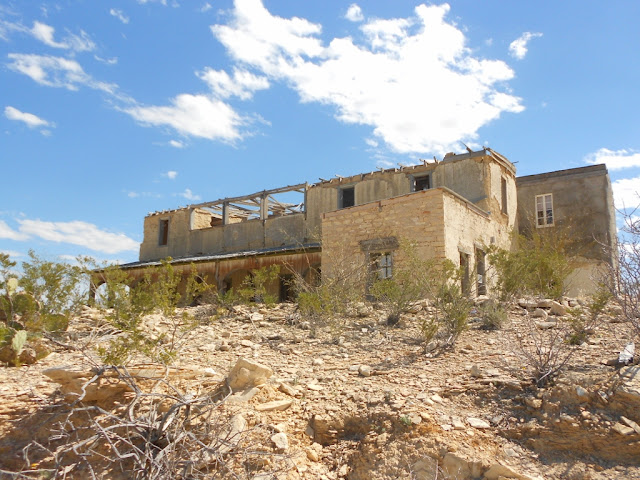 This is supposed to be a Ghost Town,
and I was wondering if that little outhouse on the left was also haunted? 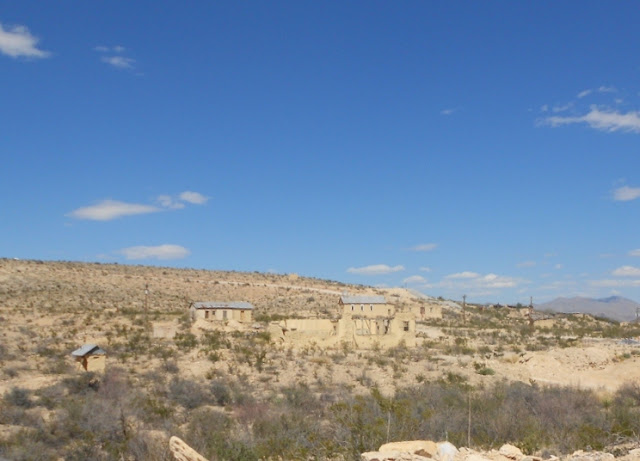 From there we drove on down to Lajitas ... a tiny border town down along the Rio Grande.  The buildings here were nicer, some resorts, lodges and nicer shops.  Things were pretty quiet for a Friday ... errr was it Friday? Thursday? Tuesday?  forget the days ya know....

We headed back towards Study Butte, but stopped in at the State park and got some information about the area and some good brochures and stuff.  Something to read up on at least and learn a little bit before we explore some more.

We really enjoyed the texture of the desert over here, the plants are greener and the rocks seem of a lighter color with more colors in the streaks along the canyons. 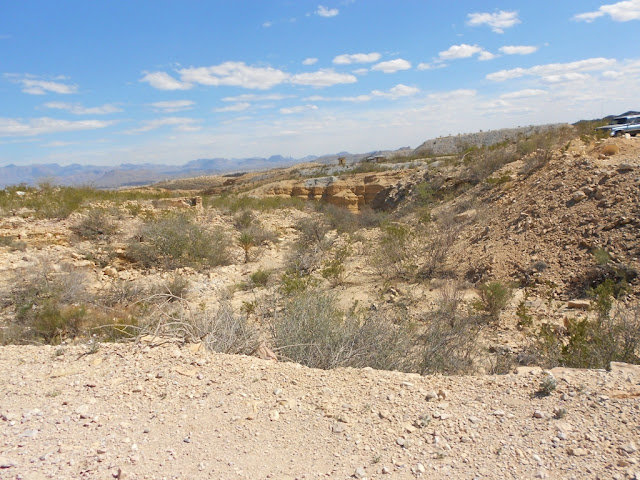 Back in Study Butte, we found a QUILT SHOP!   Of course I had to go in and look around... while Steve hung out on the porch in a rocking chair, put there for patient husbands while their wives shopped, for sure.   The lady was fun and friendly, and I bought some fat quarters and note cards.   I might go back for a few more things, will see. 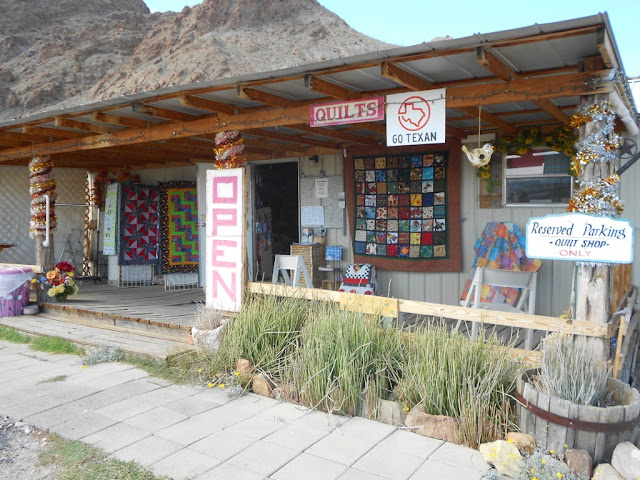 We also found out there will be a Flea Market in Study Butte tomorrow morning by the Water Sellers lot at 8, and then a Farmer's Market over in Terlingua at 9.   And the local thrift shop is open till noon tomorrow.   It sure pays to talk to the locals!

From there, we headed back to our campsite at the Big Bend Adventures Resort... the winds were kicking up and getting pretty strong.  After we got into our rig, we noticed a neighboring rig in the next row over that their awning was out.  We had gotten friendly with them the week before.  We had chatted with them back at Stillwell Ranch, and they had borrowed our ladder and we had borrowed their DVD on Big Bend.  So we felt comfortable enough to go over and try to roll up their awning before it was destroyed!   The wind was billowing it up and down like a sail and it would soon be ripped off and ruined.  It was a different kind of awning that needed a twist type rod to bring it in.  Of course they were gone, and the handle would be locked inside their rig.

Steve used his hands to turn the loop device around and around to slowly screw in the awning, while I pushed on the roller bar slowly to help guide the scissors type sideways brackets into place.   We got it back tight against their rig, but not exactly latched, but at least it was not ripping apart and sailing into the next county!   Also their lawn chairs had gone flying, so I retrieved them and folded them up and snugged them under their rig.

We made it back to our rig, and it felt like we were gonna blow to Kansas!   Steve had to almost lead me back to the rig there was so much dust swirling around I couldn't see.

We saw the couple return on their bicycles about an hour later, and struggle to get up to their rig, look around and talking and gesturing to each other.  LOL ... we weren't going to tell them it was us.  Let it be a "pay it forward" thing.

Later after the winds died down at dusk, Steve was walking the dogs and they found him and asked if he did it, they had us figured out!    He admitted it.  LOL

Here is our campsite as we went for a little walk once the winds died down a bit. 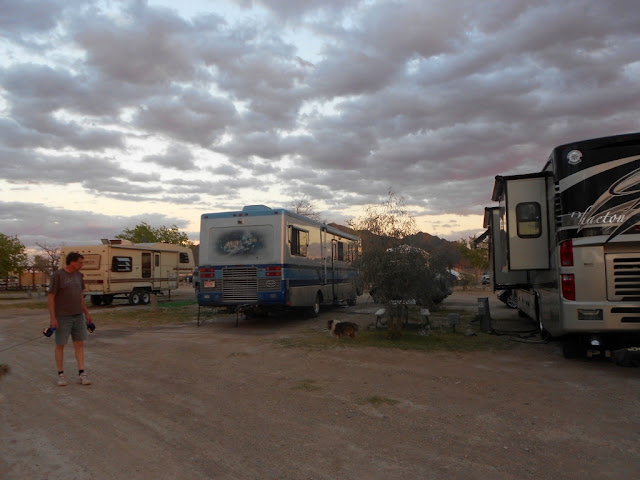 The clouds were rolling in
and we were in for one beeeeyyyoooouuuuutttteeeefffuuuullllll sunset! 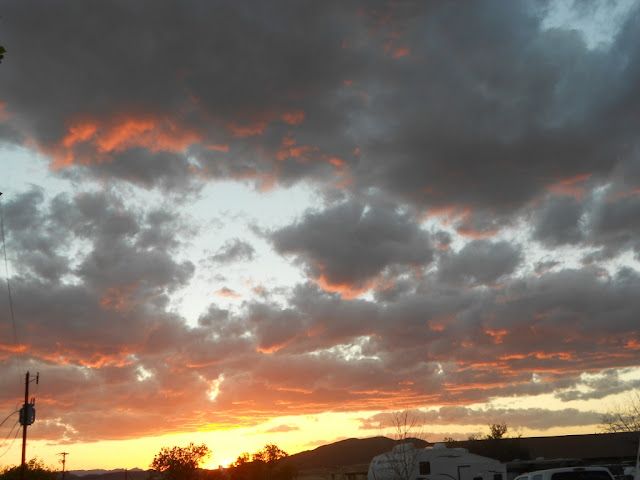 Tomorrow is supposed to be Wind Advisories
with 30-40 mph winds, and gusts up to 55 mph!
Glad we don't have to travel tomorrow.

Yup, this is just what it looked like over our RV park tonight...
no touchups no enhancement...
Pure Texas Sunset! 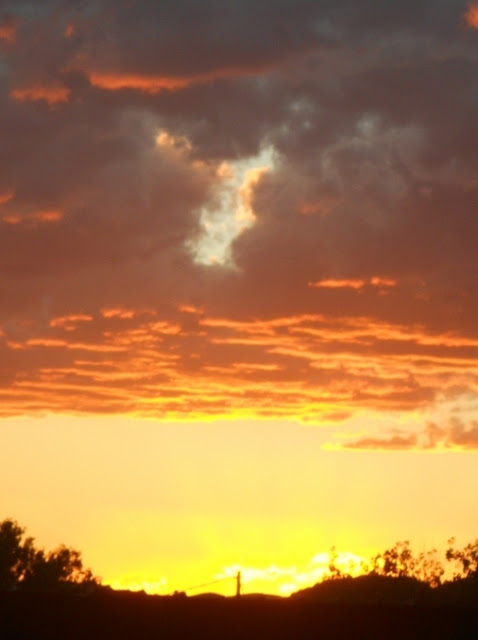 Posted by KarenInTheWoods at 10:10 PM