Because we will be leaving this park in the morning, we still have unlimited use of the water yet today... so time for a DOGGIE BATH!

Because of being in all this warm Texas weather, they are shedding off their Wisconsin Winter coats.  Needless to say, with all this dusty desert camping, they are quite dirty.  Much of their white fur on their legs and feet is a dirty grey.  If you pat them, a cloud of dust comes up off their coat into the air!  So it's a good reason to scrub them up!

Right after breakfast, I decided I would wash them before we left for the day.  Then they could dry while we were gone.

Duke was first on the list.   Actually he enjoys his baths.  If you fill the water deep enough, he will FLOAT!   He relaxes that much in the water. If you hold his head up for him, he gets so relaxed he will fall asleep in the tub.  I kid you not. 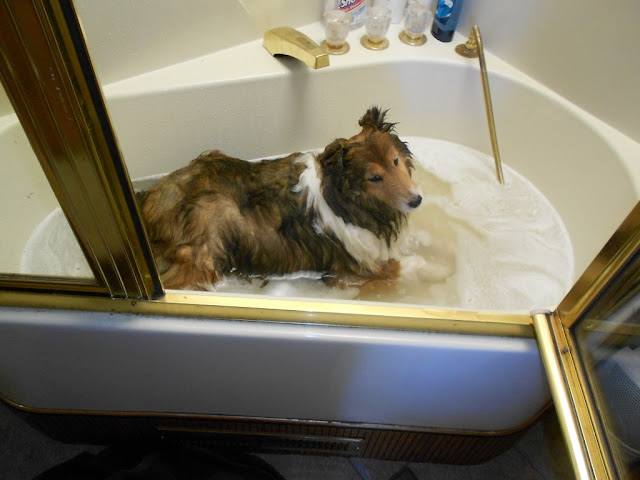 After he got good and scrubbed, he laid down and soaked a while.  He really didn't want to get up or get sprayed off, so I think he was MAD that I took him OUT of the tub!  LOL     He curled up on a couple of towels and went to sleep. 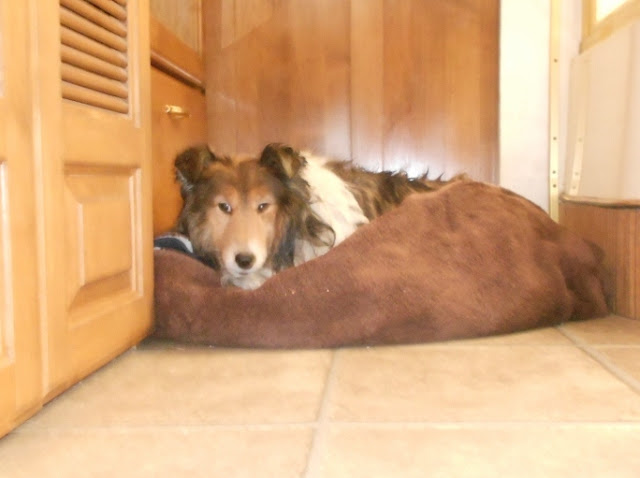 Look at that face!
(I think he is mad I took him out)


Next was Duchess (a.k.a. Ducky)  She may be called Ducky but she sure don't like water.  Unless it's a lake or a river, then she will go right in.  But as far as having to be in a tub, no way.  She chatters her teeth in fear, and with her long nose, it echos in the mouth cavity and sounds like a woodpecker!   Look how dirty she was! 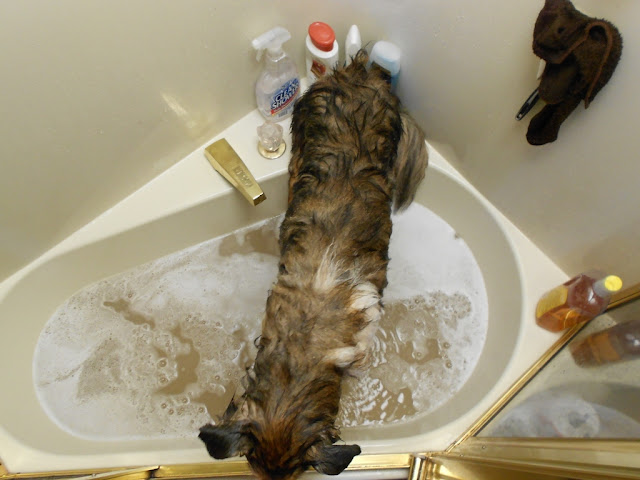 At least in the tub with the glass shower surround, I can shut the door and she can shake shake shake all she wants and it doesn't get all over the place.   I open it up to spray her a bit, then shut it again so she can shake.  Then I left her in the there to drip dry for a while.  That made her even MORE mad at me! 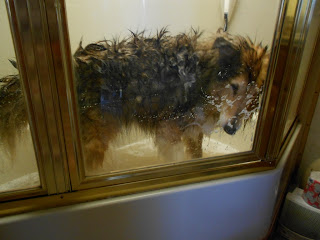 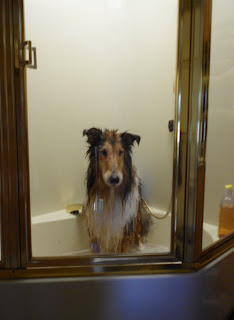 Once both dogs were washed up good, we left them out for one more walk around the park to dry off a bit before we put them in the motorhome for the day so we could take a long ride in the Tracker.  The dryness of the desert really dries them fast!  At home, their thick fur would be damp even into the next day and leave wet spots on the flooring or furniture where they lay.


We decided to drive over to the west through Terlingua, then into Lejitas along the border.  Northwest of Lejitas is a long twisty windy road called River Road that goes all the way up to Presidio, TX.  It's one of the ten most scenic routes in America.

The first thing we ran across was a movie set.  These buildings were used in nine different movies, including The Streets of Laredo, Rio Diablo, The Gambler V Playing for Keeps among others.  We walked around a bit and enjoyed some of the morning sunshine. 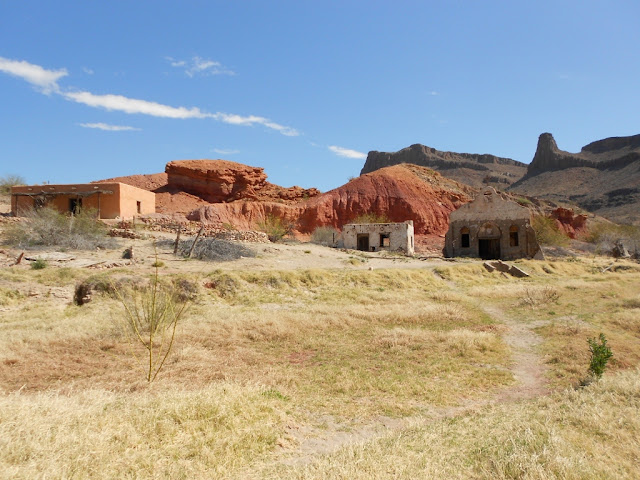 I guess now we will have to rent some of those movies to see the set? 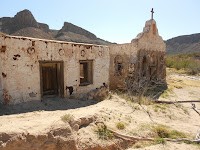 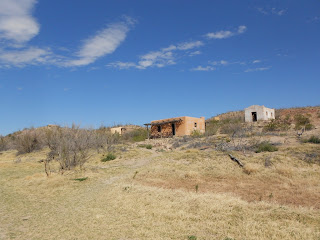 This plaque was near the entry point with more information. 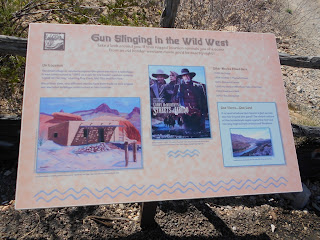 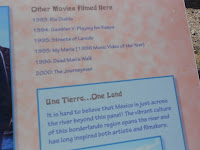 Back in the Tracker, we headed northwards.... This road wound along the banks of the Rio Grande River.  It was another gorgeous blue sky day, only in the high 60's low 70's as we went along.  Dips and turns, hills and canyons, the scenery changed with each mile. 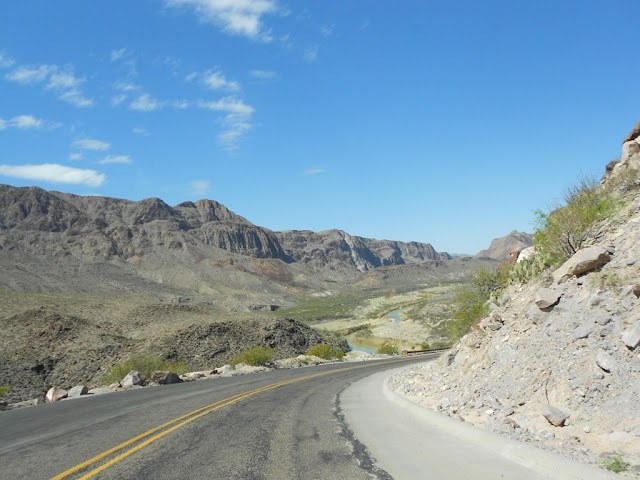 I took photos on the way north...  and tried to snap some shots on the fly,
for others we pulled over and walked around a bit to see things close to the road. 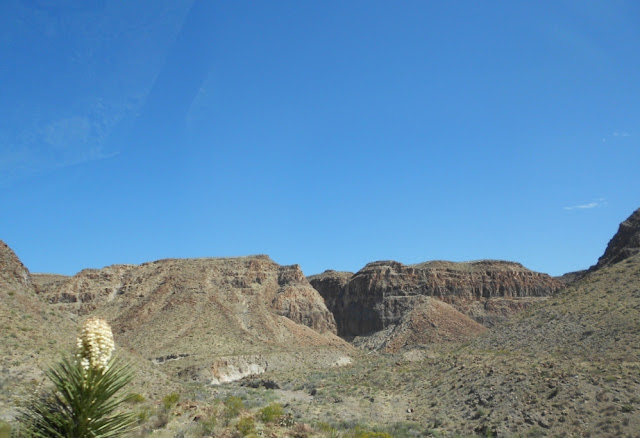 We made it up to Presidio, and decided to have a little picnic lunch at some tables set up by the state park headquarters.  We chose a nice table, but had to watch out for the bees clustering around the water faucet nearby.  They were after the drips coming out of the faucets.  Down the road we saw boxes of hives set out, so that is where they must have come from. 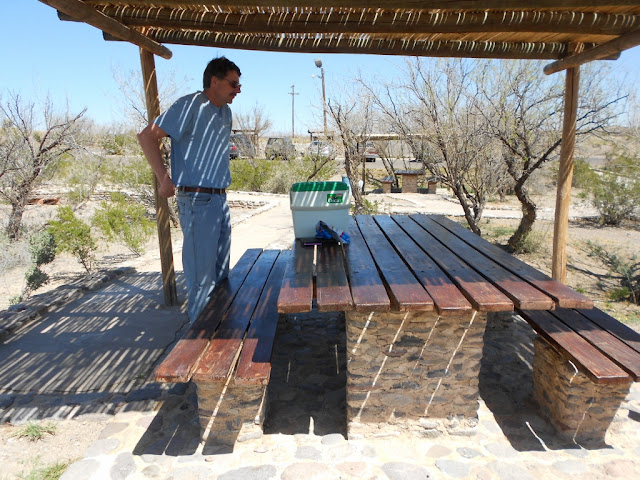 On the way back, I drove the route so Steve could take in the scenery.  It was fun dipping and turning and climbing along.  Many times we weren't going over 30mph as the road was that twisty-turny. 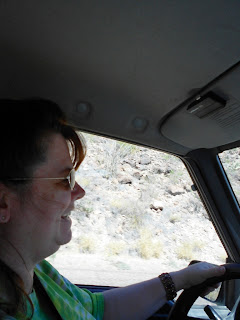 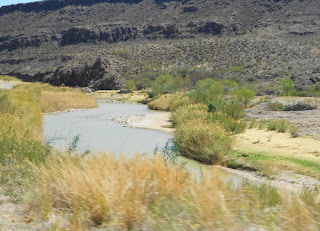 He grabbed the camera and snapped pics as we went along.

He was doing pretty good, and I am worried he is gonna take over my picture-taking duties!

I did snap this one after I pulled over, I had seen it on our way north
and I wanted to get a shot of it on the way south again. 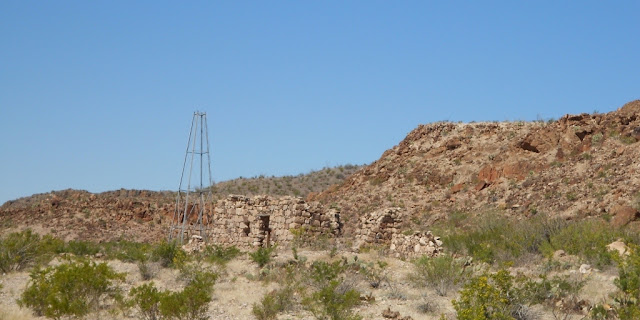 Some sections of rock were very yellow and soft and smooth
other sections were dark and craggy and reddish ore. 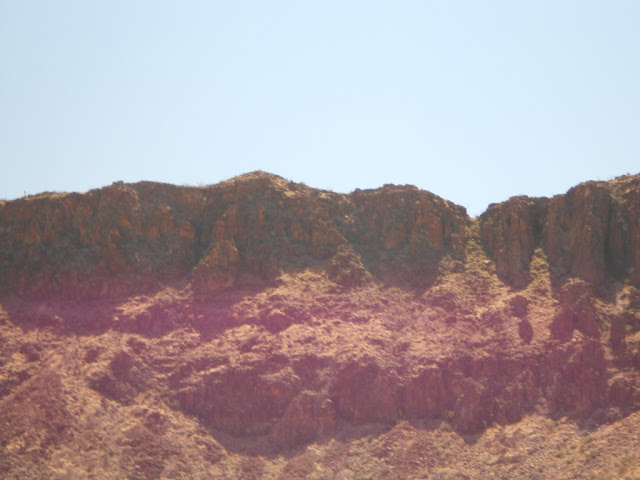 This section of the Rio Grande has more water than further south in the park area.
We saw groups of rafting and canoeing companies going out at various places along the river. 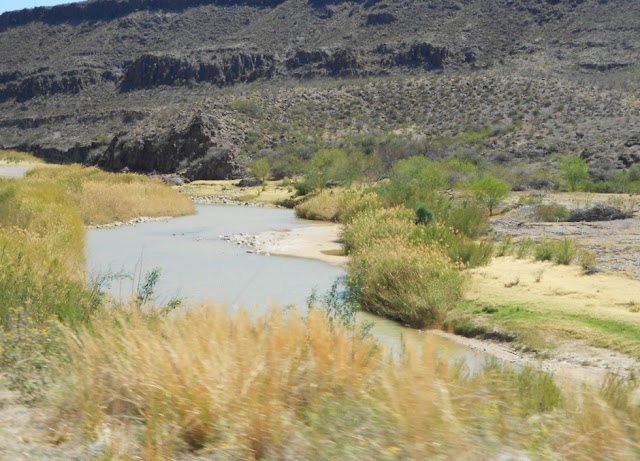 The photos don't really show the height and depth of this mountains...
but it was AWESOME! 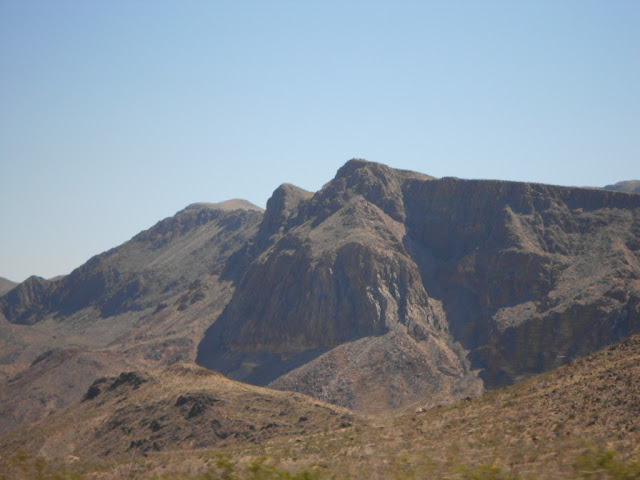 We got back to the campground by 4 p.m., just in time to get supper started.  I had a frozen turkey breast I wanted to make up.  I pop the frozen breast in the pressure cooker with a cup of water, some spices, and let it simmer at 10 pounds for 30 minutes.  Then when it comes out, I put it in the oven to "brown up" a bit.  Yummmm by the time my scalloped potatoes and canned corn was done, the turkey breast was browned up perfectly.  We cut off slices for a meal, and save the rest for cold turkey sandwiches in the upcoming days. 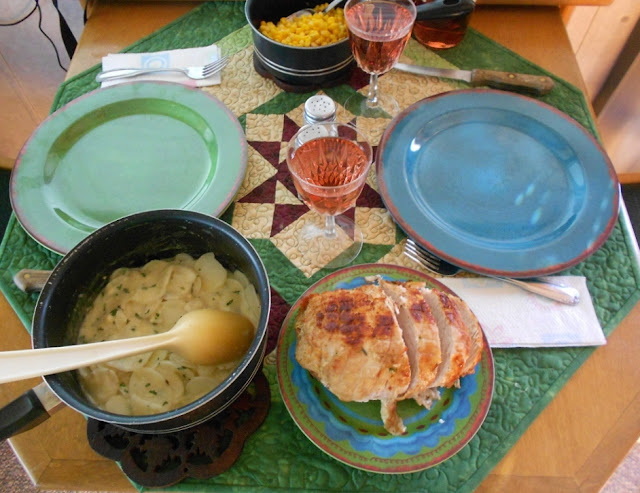 Sure made the motorhome smell good!


Oh, we stopped by a cactus seller and picked up a little reminder of our fun time here in Texas...
I think this is going on the south-facing windowsill of my Loom Room. 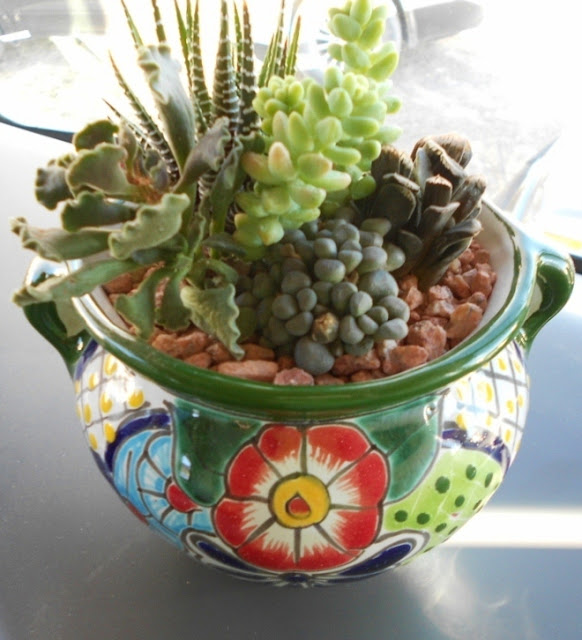 Watching the weather right now, and we are gonna get down in the 30's again tonight.  Brrrrrr

Tomorrow morning we are going to get road worthy and be doing our prep work to move on.  We will dump our grey and black tanks, top off our fresh water tank to the brim and head north.  We use the fresh water for showering and washing dishes, but use bottle water for drinking, coffee, cooking and for the dogs' water.  Stocked up on that again at the little Cottonwood store here in Study Butte.

We need to be out of our campsite by 11 a.m. and we are going to hit the road probably well before then.  I think next stop might be Fort Davis, TX?   We will see.... back to plans made in Jello!

We have been here in the Big Bend area since March 4, and have put on just under 600 miles running around in the Tracker seeing things and experiencing all that we can in such a short time.  There is no way to see it all, and as Barney OLM says, it takes months to even know one little part of the park.  At least we got on all the main roads, 2 of the back roads, and sat in the springs.  That was enough for this visit, but we will be back.....

We will see where the next day takes us... sooner or later we have to head north, back to Wisconsin.

Posted by KarenInTheWoods at 10:14 PM