Yes, we did make it home today.

As we drove closer and closer to our home town in Wisconsin, the snow banks kept getting higher and higher!  This was NOT looking good, folks... we knew they had gotten quite a few snowfalls while we were gone, but we were hoping beyond hope that the warmer days in between and the stronger rays of the sun in a better position would melt it??? 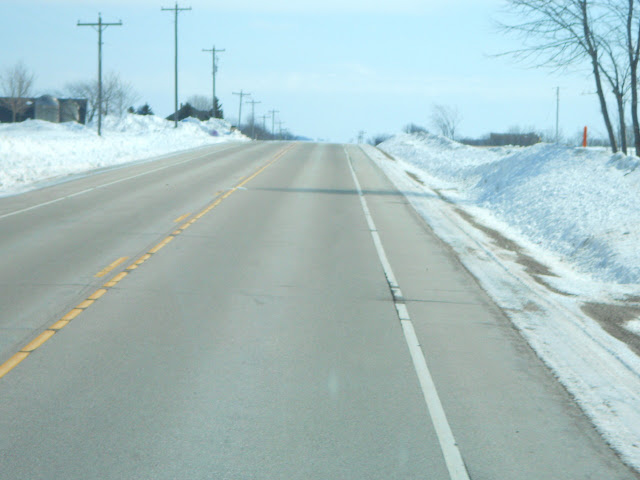 At least this road was clear down to the pavement.   When we drove away on this same road 31 days ago, it was covered in ice and salt!   Now it's lined with snow banks that are higher than the cars driving along it's paths....   Some areas we could not even see over the tops from the vantage point of the motorhome seats! 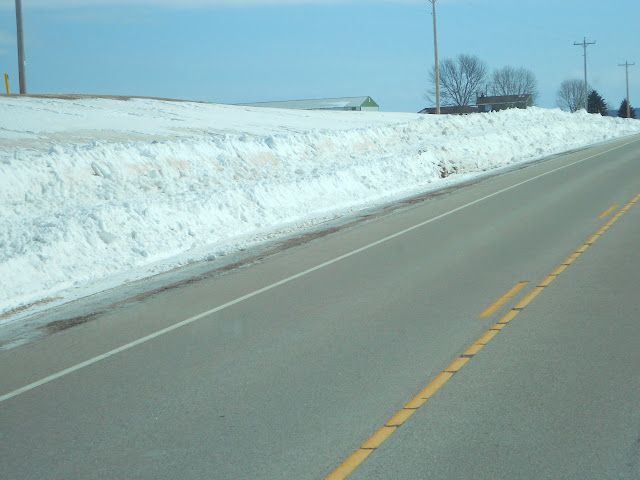 We swung around the block and came up opposite our house on a side street that faces the house from the east.   Yes, it was still standing!   We knew the front cedar shrub has broken under the weight of the snow... (we are going to cut those out in the spring anyhow)

The roof was there, the windows were there... and LOTS AND LOTS of snow was there!  And the snow was piled up deep in the front yard.  The steps were buried as was the front sidewalk.  We hadn't had mail delivery for 30 days, so nobody had walked up to the front door. 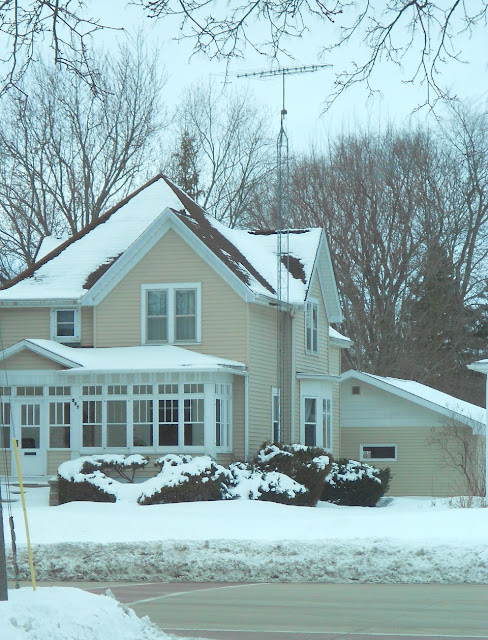 We unhooked the Tracker from the back of the motorhome... and drove it around and up into the driveway.  The neighbors had kept our driveway clear as far in as their garage while we were gone, which was nice.  It's our driveway, but we let them use it for access to reach their mom's back door and garage.  She doesn't drive, but they access her back door by using our driveway.  She is undergoing cancer chemo and has family coming and going all the time, and they needed the driveway open.  Thanks so much to them for keeping the snow at bay!

Over by our garage to the right, there was a HUGE drift!!!    Steve had to get out the snowblower and chew away it half a swipe at a time till he got that moved over enough so we could put the Tracker in the garage. 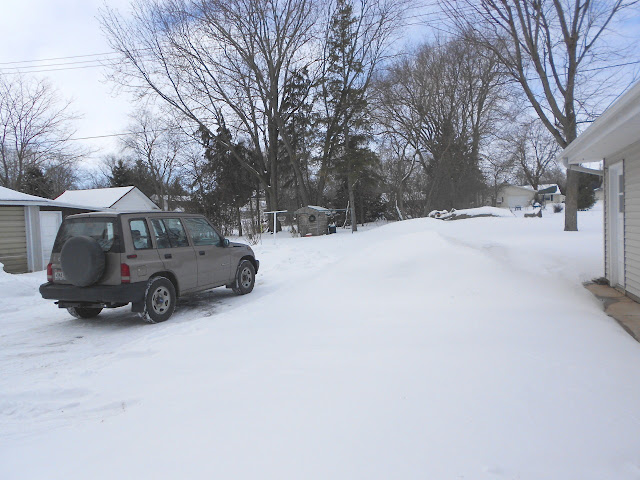 Once that was cleared we could pull in the Tracker. Look how high the bank is in front the passage door???    I got out a shovel and did the front stairs and the back steps and got some of the sidewalk cleared...   Whew, what an awful way to come home after 90 degrees in the desert! 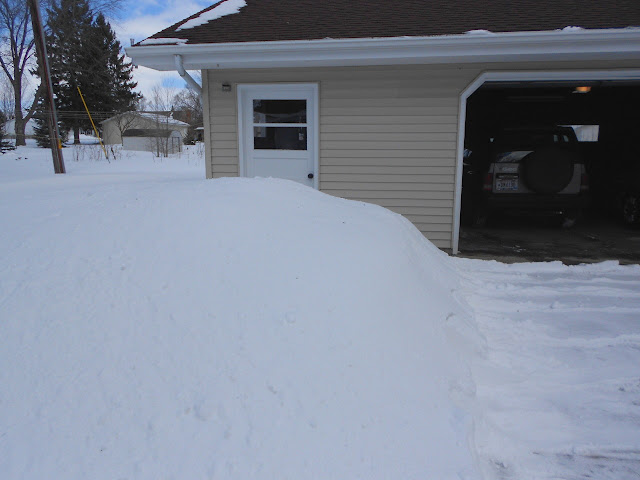 In the meantime, Steve was clearing out an area about 50x12 for the motorhome to pull up forward into... and he even found our four planks for the tires to set on (so they don't sink in the mud when spring comes?)

One side the drifted area to clear was quite high.. .and the other side down to only about 4 inches deep.. so he went through it slice by slice, taking as much as the snowblower could handle and blowing it off to the sides.
Back and forth, bit by bit.. he chewed it all up and spit it all aside.  At least it was a sunny day, but the temps were quite cold... 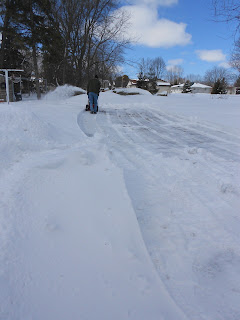 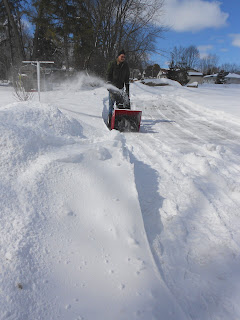 In the meantime a delivery truck came to bring a new chair to the neighbor!
Her daughter surprised her with a recliner for more comfort to rest in. 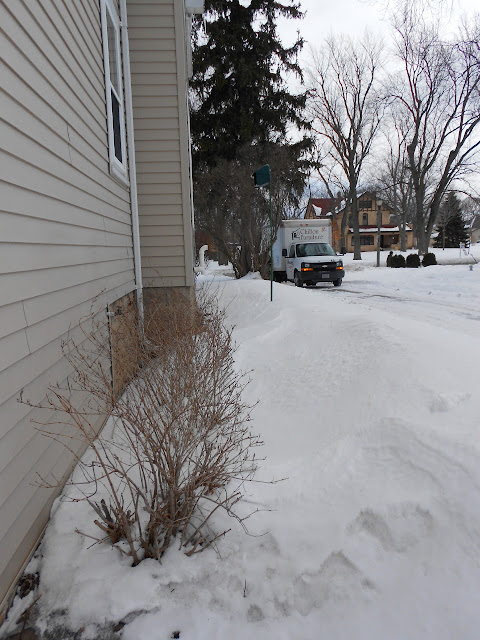 They got their truck stuck in our driveway!!!!
OH NO... we almost didn't think the motorhome was going to make it,
when their delivery truck couldn't.  Oh boy.

AH HAAAA   he was able to drive it up the icy slippery driveway and into it's place!
I guided him forward to get all six tires on the boards... safe and sound! 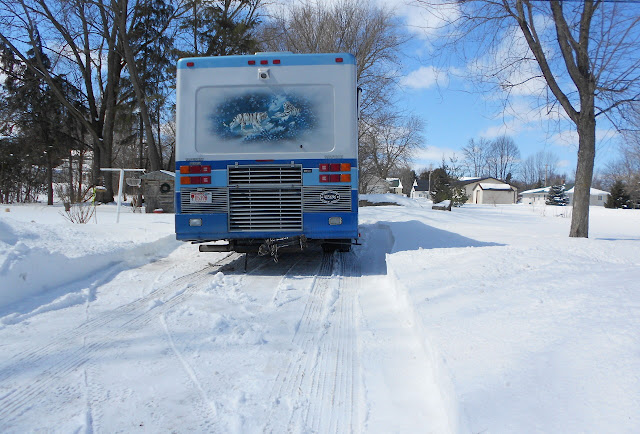 Even with a minor brake job (routine maintenance, really)  and a bit of fiddling with the pac brake, we sure were happy with the mostly 4,000 flawless miles our wonderful motorhome gave to us.  Now it's time to take a rest.... till Spring arrives in Wisconsin. 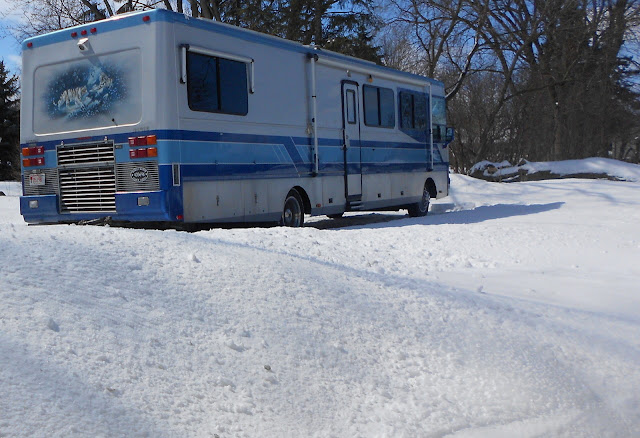 (at this rate, who knows, probably mid-May?)

The dogs were extremely happy to get home,
and checked out each and every room....
finally laying by the fireplace.
Home. 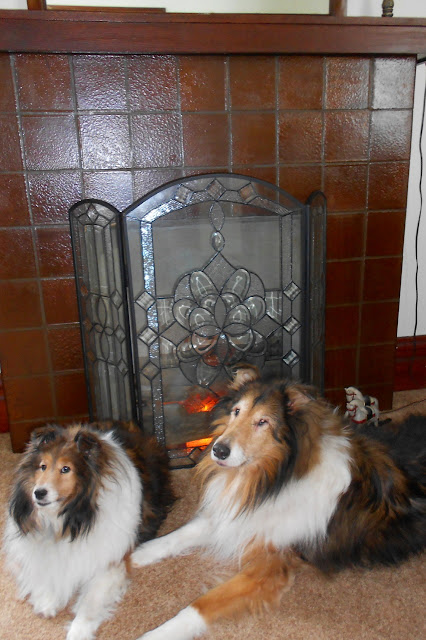 We learned  that while we were gone, our darling granddaughter, Allegra has a boo boo!  She strained her little wrist, and it's all bound up in a split.  She seems to be enjoying the attention!  She doesn't look to be in too much pain, does she? 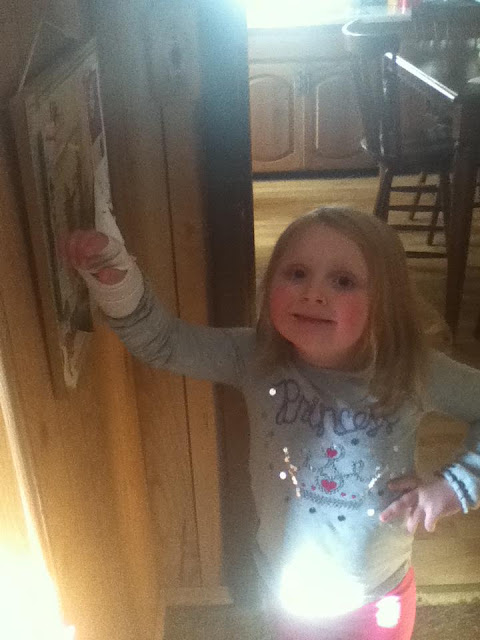 Steve cracked the whip, and got everything unloaded and sorted and hauled into the house and I trudged back and forth with loads of clothes, food, and anything that would freeze.  Ack!  After 2 hours of doing that, I was ready for a long hot shower and long long nap!   So was he, but he won't admit it.  LOL

We have tomorrow to gather our thoughts, and get out some clothes and pack up and head to Michigan for the very very sad funeral of our friends Cella and Dave's son, Christopher.  Our hearts ache to know what they are going through.  They were here for us when our son, Mike, passed away, and now we will go to be with them.

One more serious note here, my sweet barista gal, Sarah, from the little coffee shop down the road was the one here taking care of my houseplants and checking on our house while we were gone.  Things have taken a turn in the care and well-being of her 13 year old son, Cole.  He is a 2 Times Cancer Survivor.  Here is the link to her blog post....

~~~Prayers for Cole would be greatly appreciated~~~

Posted by KarenInTheWoods at 9:17 PM