Yup, it's that time.

Turn-Around time.   That part of your vacation journey when the forward motion is done, and you went as far as you were going to go.  Now it's time to turn around.  And head home. We have been gone for 20 days.  We need to be home in 18.

I used to hate it, returning home.  I used to stretch out time and try to eek out every last minute and make our plans so we ended up home on the very last day of vacation if we could.  Of course we usually have to wait up or mark time if the weather is bad right before Wisconsin.  Sometimes we have to hole up and dash up through Illinois and into Wisconsin between storms.

Oh oh... what kind of traveler am I?  The fun stuff is done and I just want to go home?  Geesh and here I was thinking I would be a good full-time RVer and now that we went and bought a house, now I want to go home??????    When we had the last house for 15 years I never wanted to go home.  What is up with me?  I am such a wuss.

We want to stop and see fellow Safari-owner John, and maybe Steve's cousins Tim & Karen, also his cousin Kathy, both here in Texas.  Also we plan to stop and see fellow bloggers Sam and Donna in St. Louis and we MUST stop and see fellow weaver and bestest buddy Rosie in Bethel, MO.   But that is about it for the "list" ....  after those things are accomplished, I think we can just beat our little butts homeward.  If Steve gets back early he can work on house projects or or or **gasp!**  return to work early??? He heard  that while he was gone, they broke a bunch of stuff that needs fixing when he gets back.

Anyhow... on to a blog about our day.

We left the Big Bend Adventures RV park about 10 a.m.  They had someone anxiously awaiting our departure to take over our site and they were truly grateful that we were leaving early so they could get moved in.  (otherwise we could have re-upped for another night by 9 a.m. and they would have been out of luck)   But we vacated our site and hooked up in the parking lot, went through our routine of the Tracker lights and tow bars and double checking etc.  Soon we were headed north through some very very pretty country! 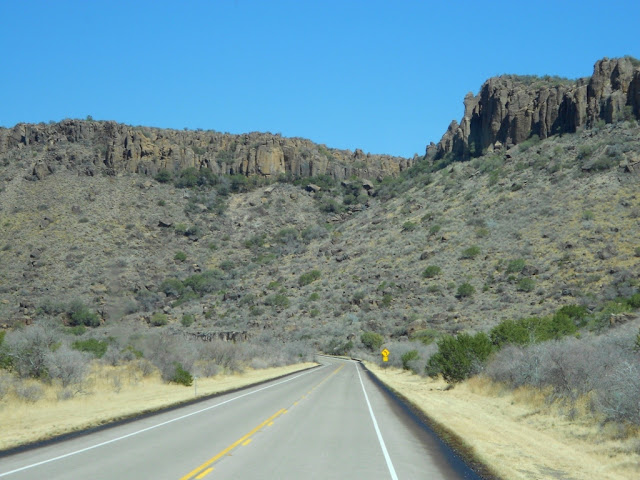 Soon the desert plants grew more lush, and the trees got taller.... 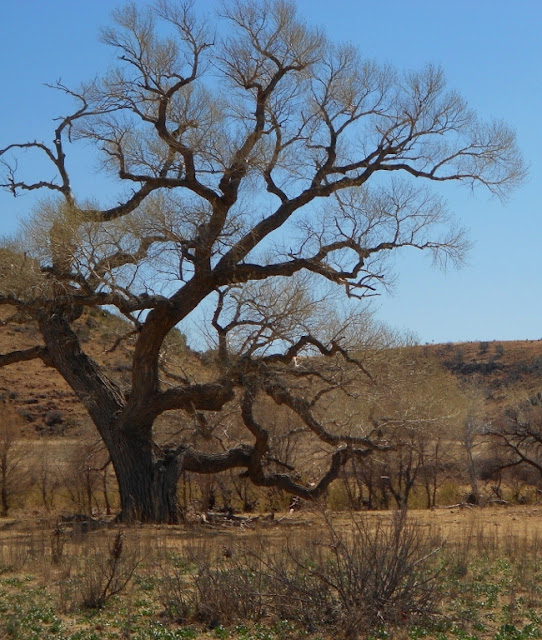 We wound our way along through the hills as they got lower and became foothills.. then rolling soft arcs to the horizon.


We decided to stop in at a Humane Society Thrift shop as we passed through Fort Davis.  We stopped and found some treasures, including another woven saddle blanket we can use as a rug or seat cover in our motorhome.  We bought one in Arizona 2 years ago and this one is very similar.   I found a pretty divided dish for using for relishes and olives and pickles etc. that will remind me of our Texas vacation.    While we were in the store, all these ambulances, fire trucks, hazmat teams and police were flying by up the road out of town.

As we drove north, it had been a very good thing that we had stopped when we did.  Otherwise it might have been US in that accident!  As we were flagged on by, we saw someone had perished in the accident and were on the ground with a sheet covering them.  Oh my.  So sad.

We were originally going to stop at Fort Davis, but instead we felt like rolling along.  The horizon from east to west was clear blue.. no clouds... and no wind.  We kept on rolling and it felt fine.

Something we noticed in this county of Jeff Davis, all the sides of the roads are sprayed with some kind of oil???  I assume it's to keep down weed growth?  But OIL?   I know it's Texas and oil country and all, I suppose more oil in their water table or groundwater doesn't make much difference?   It sure seemed strange------ 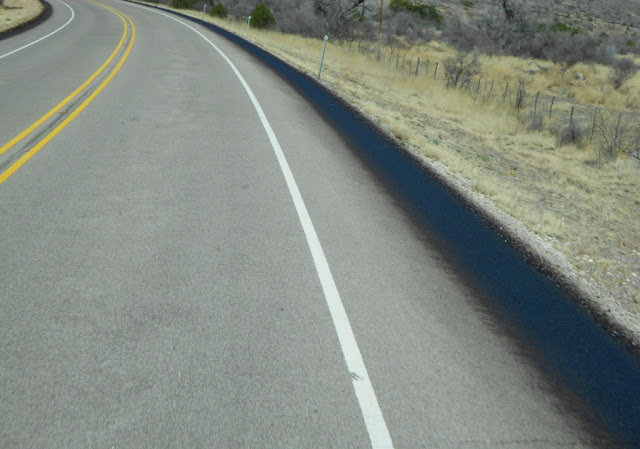 We drove on as the hills became gentle waves off in the distance.... and we saw some cows of course,
but also a deer  (or an antelope playing?)
I missed it in the this photo.. but here are the cows anyhow. 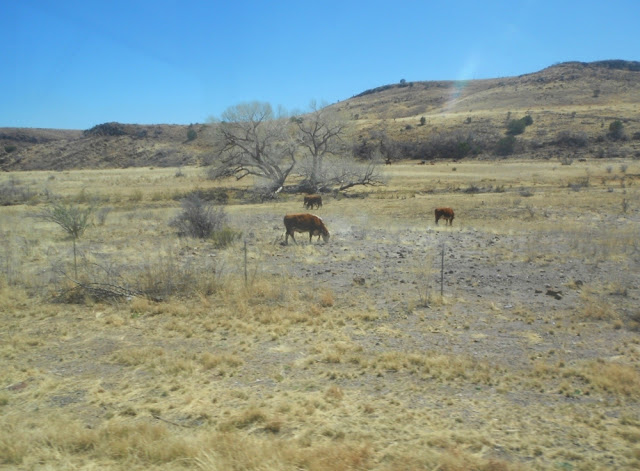 Before long, we were past Pecos, and heading along in a North East direction.  We decided to hop on the interstate and get some miles under us.   Steve is much more relaxed driving than in the photo I took on the first day as we headed south, don't you think? Some vacation did him good! 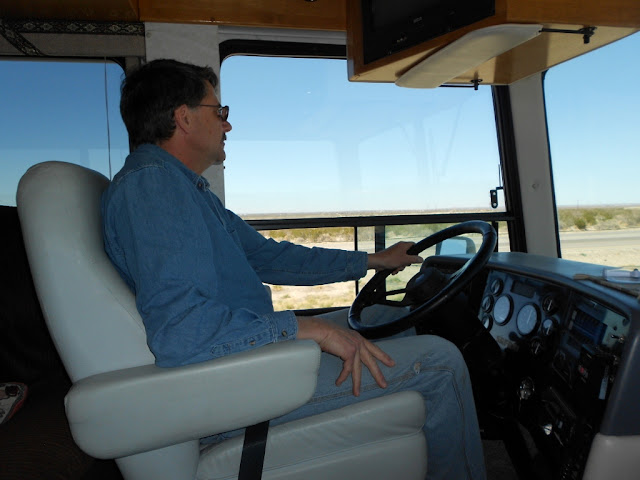 The dogs look the same, just minus some of their Wisconsin Winter Fur
(*see it on the brown loveseat?*)
Duke was also VERY happy to have REAL GRASS to pee on again!
He is not happy peeing in gravel or in the desert sands.... 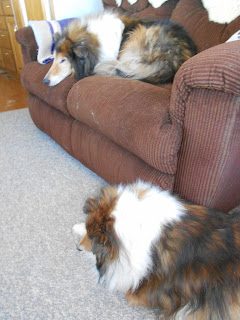 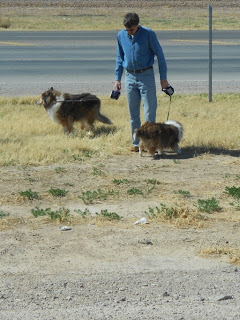 Once we hit the interstate, the cars and trucks were flying by us.  The land became very flat....  and the road was boring.  I caught up on blog reading and replying.  Something that I didn't have a signal for while we were further south in Texas. 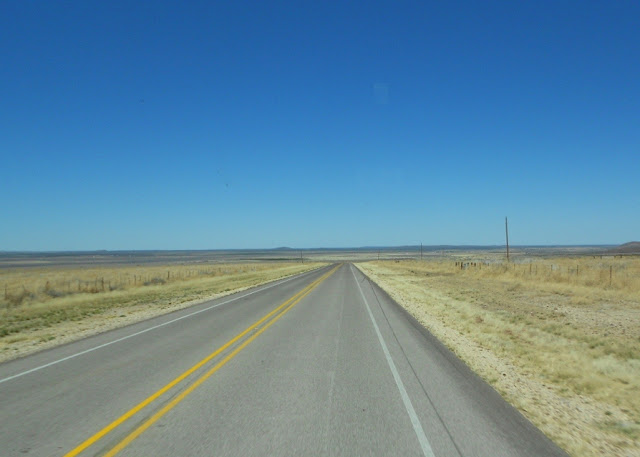 Of course, towing a toad like our Tracker, we are not to go over 55 mph.  It can harm the transmission and drive train, per the manufacturer.  So we eeeked it up to about 60 but that is about it.    But we sure aren't used to seeing signs like THIS:

We drove on through Odessa and up towards Midland.  The smell of oil was really strong, and all around this is all we saw.  Yup, we were in Oil Country! 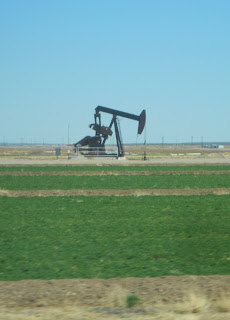 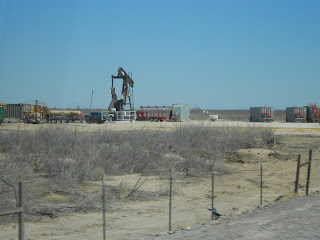 Those happy little pumpers were working away night and day, to make us more and more fuel.
So I guess we can't complain.   But the big processing areas do stink.....    just sayin.

After 275 miles today, we decided to pull off in Midland.  It was time to relax a bit and get some supper going.  I had just read on Linda and Howards blog  http://www.rv-dreams-journal.com   about what they call "Pickin Chicken".  Ya know, those rotisserie chickens at WalMart deli?  We usually reserve our first night on the road at a Walmart stop in Illinois to pick one up to celebrate our first day of driving (and not having to cook)  ...  so it seemed kinda fitting to celebrate the first day on the homeward bound journey with one too????

Howard and Linda said:  For dinner, I brought home one of those baked chickens (the ones near the grocery store checkouts that we refer to as "pickin' chickens" because we tend to just pick the meat off with our fingers) and microwave mashed potatoes.  Linda was very happy with my choices and dinner was easy. 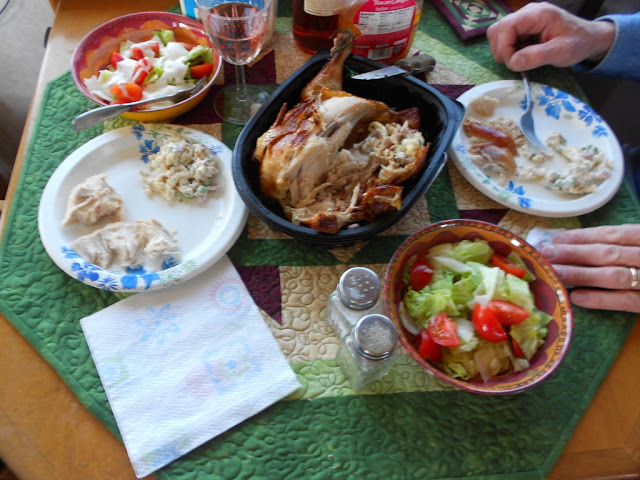 I added some pasta salad leftover from lunch,
and a tossed garden salad for each of us,
a bottle of wine..
there.. dinner was done!
***PICKIN CHICKEN***

Posted by KarenInTheWoods at 9:36 PM