An Evening of Music and a day of Rough Riding

Our evening entertainment at the Stillwell Store RV park http://stillwellstore.com/
was a duo singing team from Michigan (lower Michigan Trolls that is)
They are the Whitfords  www.thewhitfordsmusic.com
and can be reached at annwhitford@yahoo.com 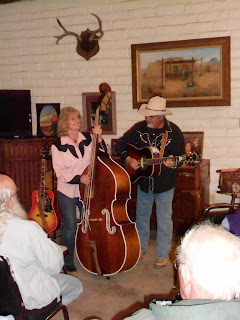 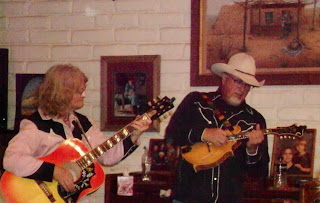 They played for the guests at the RV park in the museum hall for Hallie Stillwell.  We had such an enjoyable evening listening to them and I copied a tiny segment of one song on this video.  I never really do embedded video segments, so I hope this works.

They gave me permission to post this,
and the song is very fitting since we were AT the border....


Woke up to a cool Wednesday morning, and with clouds in the sky.  Once we got morning stuff taken care of around the motorhome, and the dogs walked, we got ready to set out for a day of adventures.  I was feeling a bit better, though weak yet, so didn't want to attempt any long walks.  Steve suggested we go for a long RIDE instead?????

First we drove down to the Panther Junction in the park to ship out some DVD's for orders to my customers.  That was a mere 35 miles.  They have a little post office there that I could use to ship out international mail, and also some post cards for the grandtots.   Then we went on down to the Rio Grande Village another 20 miles or so, and scoped out the hot springs.  Ahhhhhh it was a cool morning so I had on sweater and slacks and wool socks.  But once we found those waters, I just had to dip my feet in! 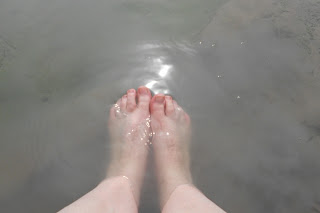 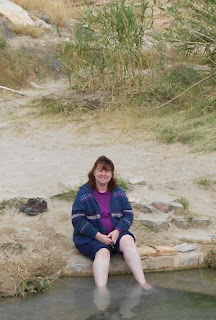 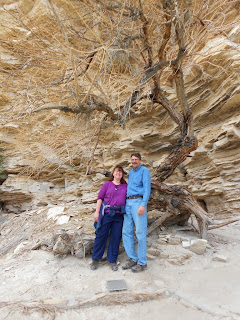 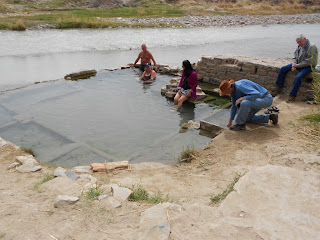 Steve didn't roll up his pants or take off his shoes, but he said that we will go back there tomorrow in our swimsuits and really enjoy a soak.  We WILL deserve a soak tomorrow... after the REST of the day we had.....


Because---- we took an off road route called the Old Ore Trail ....  it was 26 miles of rugged terrain to take our four wheel drive Tracker on.  WHEWWWW it was fun! 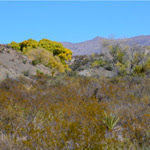 McKinney Spring
NPS Photo/Cookie Ballou
Old Ore Road26 miles (43km)
Used in the early 1900s to transport ore from Mexican mines to the railroad station at Marathon, the Old Ore Road generally follows the route used by mule and pack trains a century ago. The road has excellent views of the Chisos Mountains across the Tornillo Creek drainage to the west. Ernst Tinaja, five miles from the southern end of the road, is a popular destination.

We worked our way up and down and all around the rocky routes, down into dry creek beds, and up high ridges and along mesas.   We never had to put it into four wheel drive, but just the same, it was crawling speeds in low gears to get us through these places. 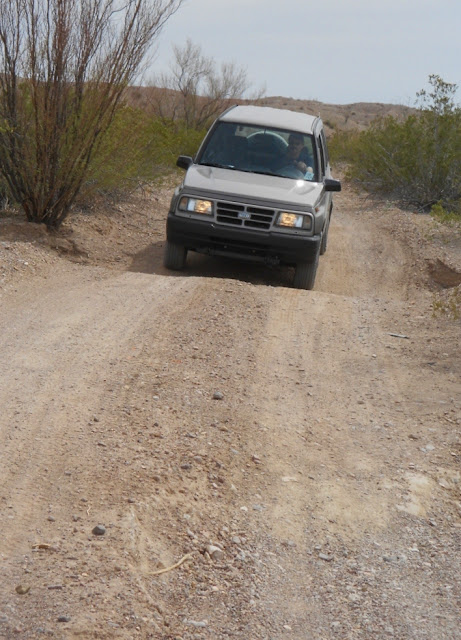 That little Tracker was as nimble as a mountain goat, I tell ya!   We had a full tank of fuel, plenty of water, food, blankets and our tablet and wilson antenna booster which we could get a data signal out there... just no cell signal.    We also had along a first aid kit, sunscreen and lip balm.... LOL 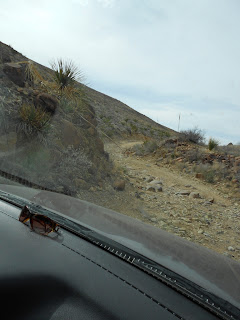 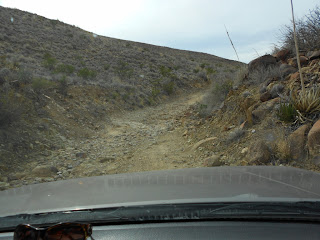 We did see three dirt bike riders coming the other way... and stopped on top of a big big hill to talk to a local man who was admiring the scenery and thinking of a long time friend who used to ride that trail with him who was no longer able to.  We didn't ask why, but nodded our heads in agreement.


The scenery was breathtaking! 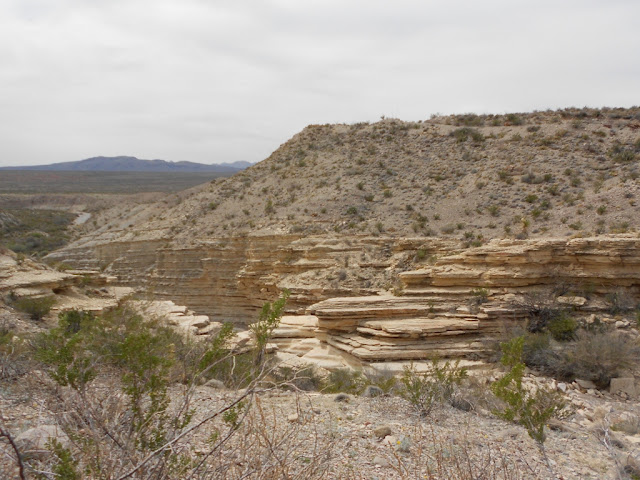 Some areas I was pretty well "tight-fisting" my grip on the handle over my passenger side seat.  We had some close spaces to the steep drop offs into canyons below.  I made a few video sections to sit back and watch some cold winter night when we are old and grey...  and say:

(Steve watering a cactus in the background) 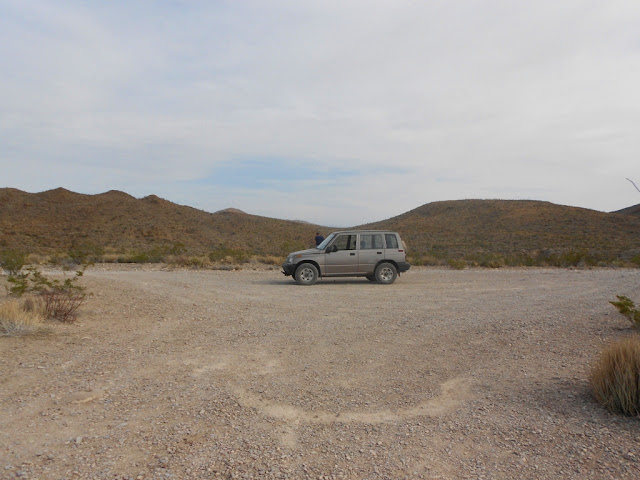 It was mile after mile of amazing terrain... sometimes dryer and browner, other times lush and green with flowers blooming... even in the middle of the road! 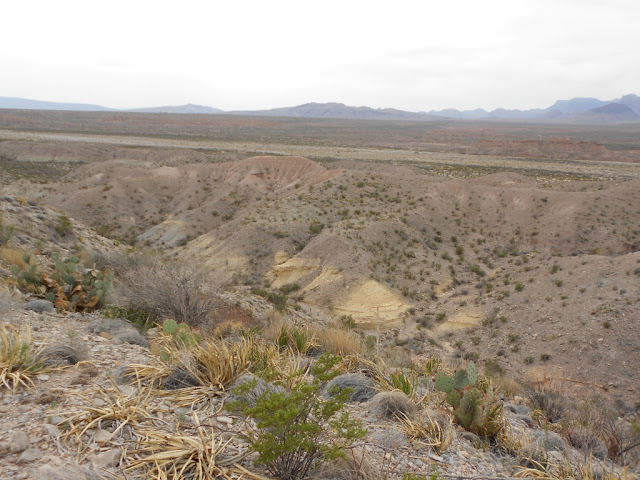 The views were stupendous and we jittered and jammed our way along--- doing about 5 miles per hour.  We scrambled up and down the washed and arroyos.  You could see where the rushing waters could come tearing down through these chasms when there was rain in the mountains.

This isn't a very good map, but we went so far around on the red roads that were blacktop from our RV park down around to the bottom by the Rio Grande, and then came up the yellow section highlighted which was all the rustic terrain of the Old Ore Road. 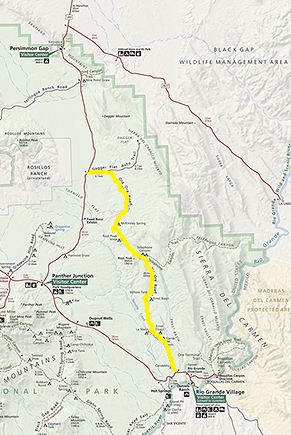 We saw sooo many things, too many to describe.  Again, I took 147 pictures, but only will post these for you.  The rest go into our slideshow on our little digital picture frame...   again for us to point and say:  "Remember when????"

Isn't that what this trip is all about? Making Memories?


Posted by KarenInTheWoods at 10:11 PM