Well.. I started out my day with going to get the hose to water my tomatos.... hmmmmmmm 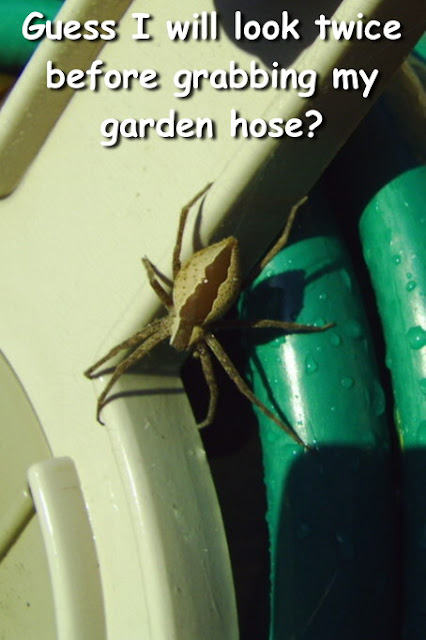 So that made me Git Up and Go... in the opposite direction!    LOL   Not sure what kind it is, but it was BIG and I left it alone.   That is a very thick rubber hose, not a skinny little lawn hose, in that picture.  Just to put his size in perspective!  As long as they stay OUTSIDE of my house, that is fine.  But if it was INSIDE, well, it would have drowned under a full can of insect killer, that is for sure.
Took care of bill paying this morning, then chatted with my sister in Lower Michigan and my mom in Upper Michigan.  We try to chat every morning on MSN Messenger.   My sister is still at her hubby's side who is undergoing rigorous radiation and chemo for 6 weeks at a hospital in Ann Arbor.  I think the daily computer contact is about the only thing keeping her sane after dealing with all the doctors, clinics and instructions.   Mom has been taking care of planting sister's garden at home and helping it to get a good start while they are away.   So we chatted and shared our mornings before the day gets underway.
My folks bought a new toy.... 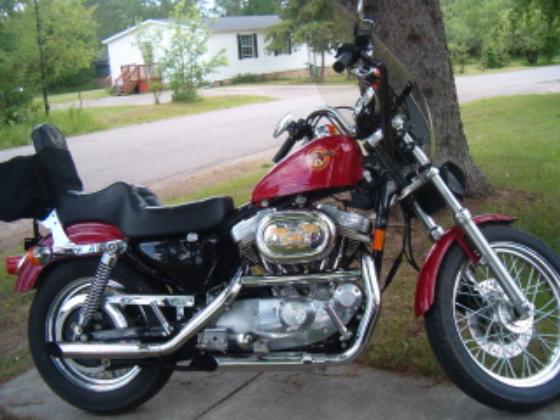 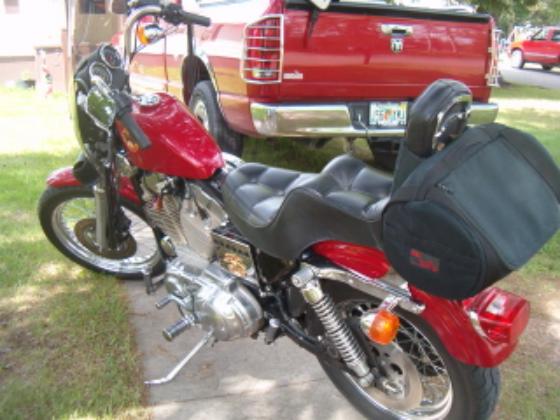 It's an exact match to my brother's Sportster...  what a bunch of copycats!   LOL  I am sure they will let Steveio and I take a buzz on it when we get up there too.   What fun!
On the camping front:  I ordered the second set of shocks (the rears) for our rig.  If you read my blog 2 weeks ago, you would have heard my ordeal with the front shocks and customer service.  So since those shocks DID fit, I bit the bullet and called them again to order the rear shocks.   One rear shock is fine on our rig, but Steve noticed a bit of seepage on the other shock.  So he is assuming that the rears should be done too.  Since we finally found a place that has the right parts, and it's a hard rig to locate parts for, we went ahead and ordered the rear ones.
See, Safari made their own chassis, with a sub company called Magnum, and didn't use a large commercial chassis company with common parts, like Freightliner or Workhorse.   Steve said the nuts are rusted on pretty tight, so he has been soaking them with penetrating fluid each time, and hopefully they will work loose by the time the new shocks come.  Otherwise he will have to torch them off.   But not until the new ones come, in case they are not the right ones.   ACK
The other day I had been planning to wash all the awnings on the rig.... . those plans got waylaid and I ended up spending the evening grooming doggers...  Being long haired fuzzy muttenhiemers, they take a long time!  They don't seem to have shed their winter coats right this spring, and still have a lot of attached winter undercoat on their bodies.  Warm baths and rigorous brushing is the best way to loosen it.  Duke enjoys it (as you can see) but Duchess (Ducky)  runs and hides!  haha 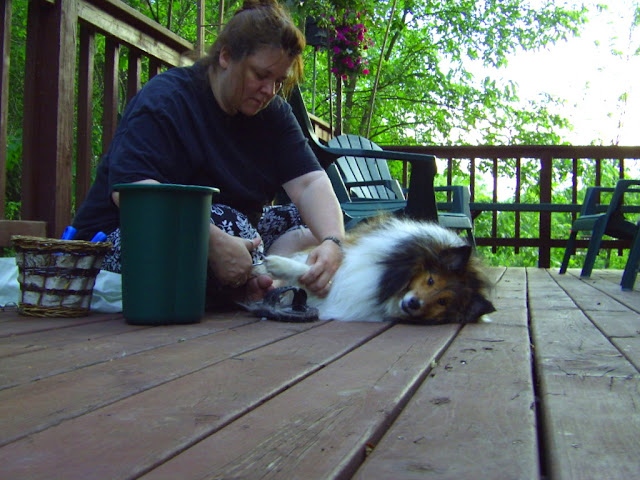 (not a very flattering pic of me, it was hot and I had been brushing snipping clipping and pedicures
for a while when Steve snapped this pic!)
So now I got an email from hunny-bun  Steveio at work, and he said let's do the awnings and a good rig washing tonight instead.  I would start it already today but I have sweetie pie Chelsea here till 3.
I went out and started up our fridge so it's cold later when I am ready to load in the groceries.   We will take off for the weekend, not sure where we will end up.  The weatherman is saying rain rain and more rain, but we don't really believe him anyhow.
So I guess I will go out and take stock and replenish my yarn supplies for what I used up last weekend, and figure what I am going to work on this weekend.