Well well... today's blog has some RV things, after I forced you all to look at baby pics, and family party pics in my last blog.   LOL

Two weeks ago, I mentioned that 2 of our sensors for the Hopkins Tire Pressure monitoring system were not working right.  One bulged out (a bad battery sealed in it)  and the other just stopped sending a signal to the base unit.

So I called Hopkins, and a very nice man said he would send me two new sensors, free of charge.  It is out of warranty by 6 months, but he said that was ok.  He would send out the two new ones right away, and for me to ship back the broken ones with the pre-paid UPS label also in the box and that will be fine.  Nice customer service!

So the new sensors came yesterday via UPS, and I put them on, calibrating them and voila! It works just fine.   Will pop the two old ones in the box and ship it back later today when I head to town.  I can just drop it off at the UPS counter in our small town office supply store and it won't cost me a thing. 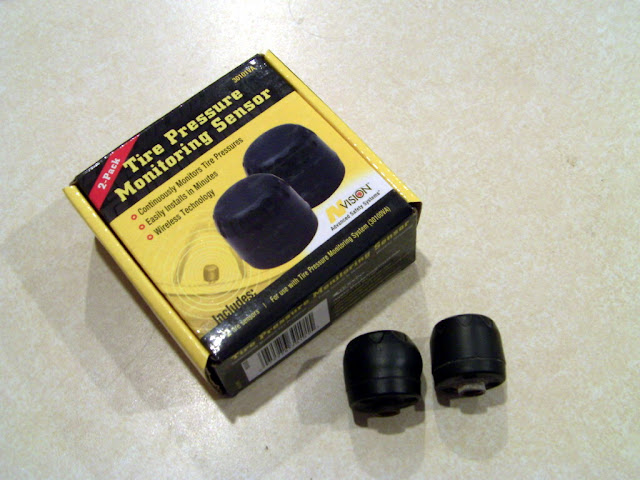 (See? the one on the left is bulged out a bit, from a defective battery molded inside.
The Hopkins Customer Service guy said they had trouble with the first ones made that had them in,
so they would gladly replace them free of charge for me)
Having a tire pressure monitor brings us peace of mind.  Steve still checks the tires regularly, but the monitor can tell us if there is a slow leak will signal a warning, a rapid leak will signal an urgent warning... and prevent a blowout from travelling on a badly inflated tire.   We had 2 blowouts on our last rig on the interstate, 60 miles apart, and never want to experience that again.  Perhaps if we had a tire pressure monitor back then, we would have known the pressure was off before they blew, and could have gotten to the side of the road safely and prepared ourselves better for a repair and replacement. The unit sends a warning if the pressures change 12% either higher or lower than the calibrated pressure when you put them on.

Next on the list.....
Our lovely woven lawn chairs are now going on 12 years old.  Sigh.  We had bought the chairs to get the frames originally as anniversary presents to each other, cut off the plastic manufactured webbing and I wove on them, using braided macramé cord.  The pine tree motif matches the one we have on our house shutters.

Here is a page with instructions:  How to weave lawn chairs with macreme cord
Here is a link to my past blog post:    My past blog post on making woven macramé lawn chairs
Well, 2 weeks ago when we were camping, Steve sat on mine and broke the back hinge!   It can not be repaired, but it can be wire-tied up to sit in, but will not be able to fold anymore.  So we can not use it camping anymore, because it cannot be folded up to stow in the motorhome. We sure loved these chairs. 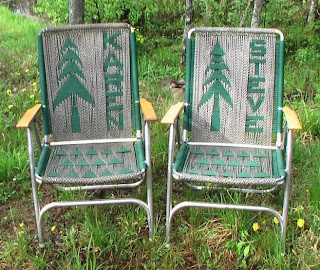 In the past, on some of the woven chairs, when they broke I had transferred the woven sections to new chair frames, which happened to his STEVE chair about 4 years ago.  That only works if you have a chair frame of the same size.  But we can not get these same sized chairs or frames anymore.  They are larger, wider and taller than regular folding lawn chairs and they are no longer made.  Sigh.  To reduce the pattern to a smaller chair frame would basically mean re-weaving the entire chair and redesigning my original pattern, having to redraft and re-graph it to cut the pattern down for a narrower and shorter frame.

Soooooo it's time to retire them from camping.  We will keep them in the garage (with mine set permanently in the sitting position)  and use them for extra chairs for our on deck when company comes to the house I guess.

Last summer, our friends Tina and Bruce from Indiana had these cool fold out deck chairs with a little side table when they came up to visit us in their RV. We tried theirs out and they were comfortable, lightweight, and sturdy.  We said that was interesting and we would think about those when our woven ones wore out. 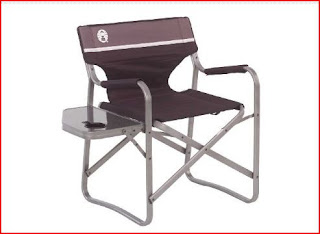 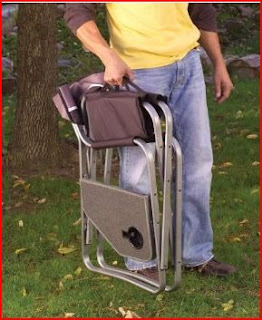 We found a pair of them made by Coleman, on sale, at our local Pamida store!  From $50 down to $40. They are sturdy, lightweight, fold up nice and seem comfortable.    Happy Anniversary to us, (not till the end of the month)  But we bought them early!  LOL

Coleman has always been a good product for us, and these frames are powder coated, the rivets seem strong, and the fabric seems to be sewn well.  I like the idea of the little flip up table and cup-holder, as I always have something to set down, be it a coffee cup, wine glass, knitting, scissors or eyeglasses.   These will be great for sitting around the campfire, or socializing and carrying to other campsites. 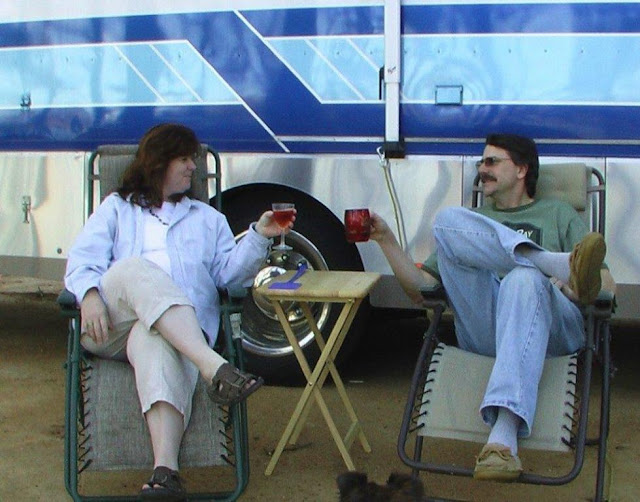 We never set the relaxing recliners near the campfire, because we don't want sparks landing on the lower leg portions.  All of our lawn chairs are put away each night, or at least folded up and placed under our awning.  It keeps them clean and dry, but also safe from theft-- that can happen too easily with expensive chairs.   I also write our names on them with permanent marker, but Steve said we could use the power engraving tool on the new ones too.  Good idea, and I think I will do that soon.   After the bucks involved in buying these, I don't want them walking off.


Side note here:
Did you know most RV insurance policies only cover your personal possessions at a limit of only $500 ???   Yup, only five hundred bucks!   Honestly, you might want to check the back page of your RV policy!   That is just about the total cost of all four lawn chairs and our Roadtrip grill.   If we had a total loss, can you imagine how many possessions inside that would NOT be covered?     Tools, laptops, fishing gear, cameras, cell phones, camping gear, not to even start on the household items like bedding, towels, dishes, cooking stuff, and clothing.    After a frank discussion with our insurance agent, we pressured him into looking at our list of replacement value items that we usually take from the house into the motorhome on a regular basis. He said that can be very difficult to prove in a claim otherwise if we didn't make a list.  Some items would be covered by our replacement value homeowner's insurance.  But...... who would believe I take a $900 laptop, a $600 laptop, a $300 air card, a $100 GPS dongle and a $100 router when I go camping on a weekend?   Just that is over  $2,000 bucks!    And then we made a list of the things we leave in the motorhome all the time like the helmets for the scooter, a large array of tools, air compressor, pair of handdheld CB's, weather radio, and maintenance supplies.  Did you know our Splendide washer/dryer is considered a personal possession because it is not mounted down like other original equipment, those are $1,200 to replace.   We are talking almost $7,000 dollars in possessions kept in the motorhome, and another $8,000 in items we take from in the house on a regular basis to go camping.   Once we made up the lists (and an accompanying homemade DVD video of each compartment and drawer and items)  we were able to obtain a rider of full replacement coverage of each and every item we take along. It costs us an extra $100 a year--- but VERY well worth the peace of mind.   Again, this is replacement value coverage, not a prorated depreciated value.
off the soapbox now----


On Sunday we had little Jameson here.  He is 22 months old now---  We were out doing a few things in the yard with him, letting him fill the bird feeders, helping Granfaddah put some branches in a pile, and going over to pat and kiss the neighbors plaster goose in their flower bed.  Yup, that was his idea.

Then we went in Granfaddah's motorhome---  he loves going in there.  But we have to cover the front steering wheel and buttons and levers with a blanket because he is VERY curious and the first time that is exactly what he went directly to, and he wanted to push, pull and touch every button. Not a good idea!   So now we are careful about hiding that area from him, and getting him interested in other things instead.  We were figuring out a few things and stowing some gear,  and Jameson was looking for something to do.   I always carry along a box of crayons and few colorbooks for visiting kids....  and he LOVES to color!  He is careful with the skinny crayons and has not broken them.  I am getting a nice collection of refrigerator art.

I snapped a few pics of him, perched on Grandfaddah's little rocking ottoman, bellied up to the small table that Granfaddah made for our rig.... perfect size for him!   I could not decide which pic was the cutest, so I put in all three!  hahahaha 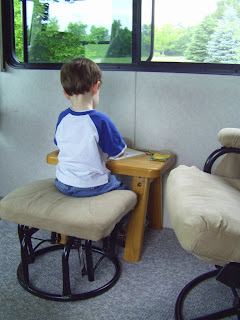 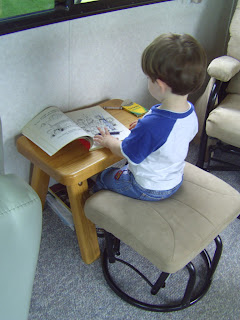 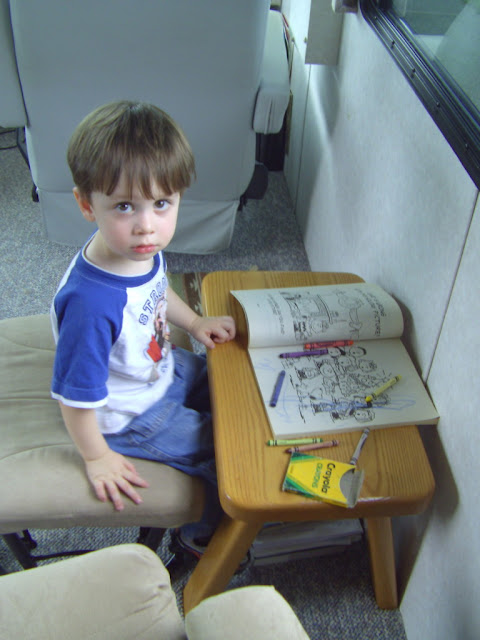 What a little artist....

It's Wednesday, so time to start gearing up for the weekend.  We are going camping again, probably a bit up north near where Steveio can get another load of firewood.  Have to pack up a few more groceries and clothes and we are ready to roll.    Should be a warm and nice weekend, but we need to leave early on Sunday though, because we are invited to Dan and Heather's house for a cookout for Father's Day... wheee so we get to see little Allegra again too!
Posted by KarenInTheWoods at 8:53 AM