This is the third post about "Camp Grandma" ---
I have been taking one day with each of my grandkids at a campground in Northern Wisconsin.
The first two posts are here:
First Day at Camp Grandma - Chelsea's Day
Second day at Camp Grandma - Allegra's Day
Now it is Jameson's turn.  He is going to be 2 years old at the end of July and has been camping quite a few times already with us.  So the motorhome is no stranger to him, and he is eager to explore and have some adventures with his Granmuddah Pfun!
At noon on Saturday, after dropping off Allegra, I picked him up in Green Bay with his bags of gear and we did a little shopping before heading north.

We traveled up to our house to pick up the dogs and a few things needed for a birthday dinner the next day for our oldest daughter Erin. The moment we got into the house, he was kinda upset that "his" ceiling fan was not running.  That is the very first thing he looks at when he comes into the house, ever since he was a tiny baby.  It's wayyy up high on the cathedral ceiling in our home, and for some reason each time he comes, he points to it and watches it spin.  I ran in and out of the door with a few items loading up the car while he explored the toys on the shelf, but each time he would point up and ask "Fan?"   So, okay, I turned the fan on just to please him!  It's funny, but Chelsea looks for it too each day she comes over, and she is only 5 months old. As a matter of fact, she is looking at it right now and smiling as I am typing this.  She is set up next to me on the couch and drinking her bottle and looking at that ceiling fan.  Go figger?

Before we were ready to leave, he grabbed the Cup-O toys to take along (because we knew he would be needing a bath later that night in the motorhome bathtub)  and off we went to the park, dogs and all.   So we left all loaded up in our car with Jameson and car seat, 2 dogs, a big cooler of Alaskan Snow Crab, 3 bags of groceries, a turkey deepfryer kettle and the propane  burner stand and a 20 pound propane tank!     (more later on why we took that along)
We pulled into the campground and he was very excited to see Grandpa's Camper parked in a campsite.   He helped me to unload the car and carry things to the motorhome one at a time.  Kinda fun to have help!   Plus, my favorite quoted line from the movie "On Golden Pond" is when Henry Fonda says about his grandson:   "What's the point of having a dwarf if they don't do chores!"    haha!
Once we had everything stowed away, we hauled out the stroller and took a walk. 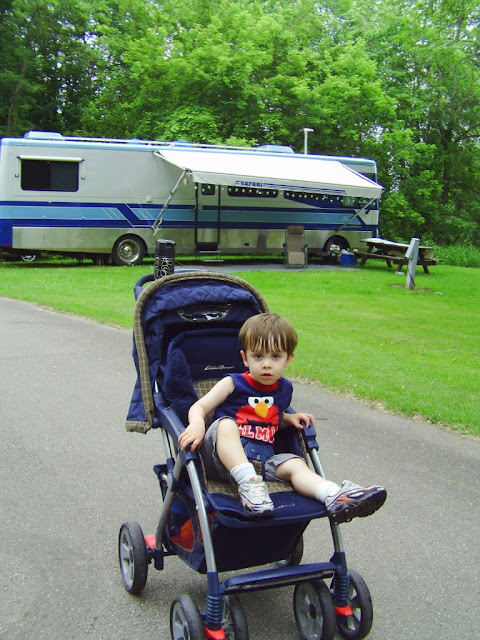 It was pretty hot and humid, but he wanted to PLAY!   Around the loop we went and over to the playground.  My oh my,  the first thing he did was to KISS the dinosaur! 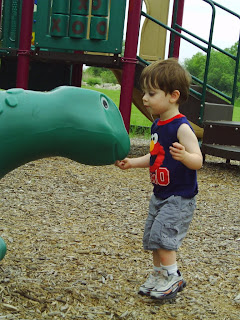 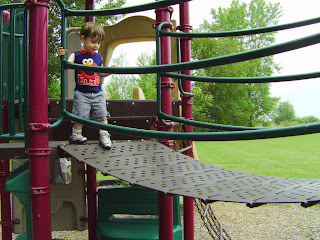 Then he was on and off and up and down and around the playground equipment and having a blast!
We took along some new sand toys.. but no sand or swimming beach!
He found out that the bark chips on the playground area were the next best thing. 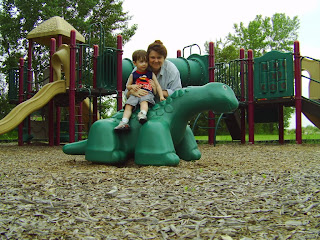 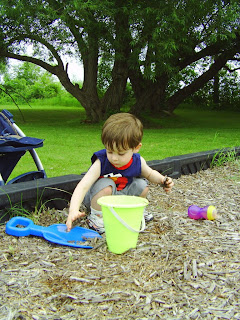 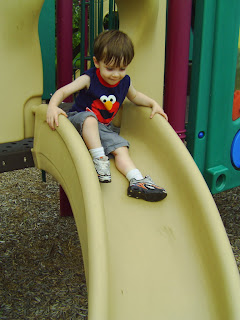 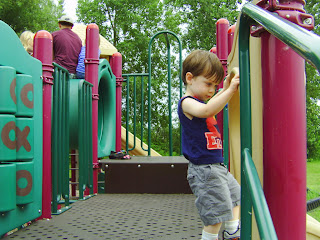 He wore himself out on the playground stuff, and I popped him back in the stroller to cruise the grounds.  Wonder what folks thought seeing me wheel around three different kids on three different days?  LOL    We went down by the harbor and Jameson was excited to see the seagulls.  They were flying around and squawking, much to his delight.  Here he is following some as they flew overhead. 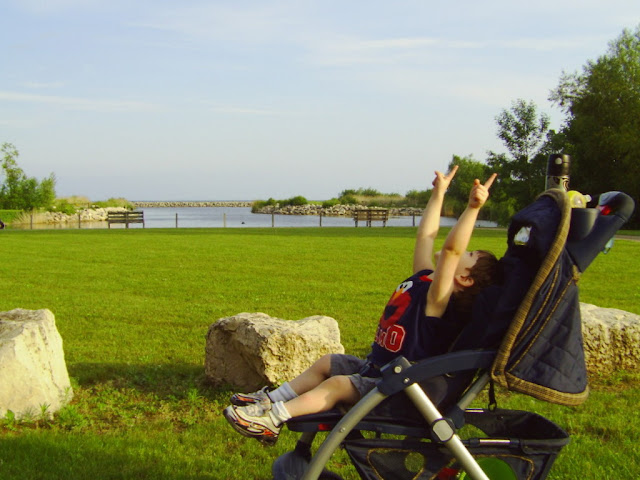 It was fun seeing things through his eyes.  He saw a leaf hanging on an invisible spider web... it was flickering and fluttering in the breeze, suspended right at his eye level.  We watched it for a bit till he reached out and touched it.  Then it broke free from the web and fluttered to the ground.  He waved and said:  "Bye bye".


Finally we headed back to our campsite---  it was time to "set up camp"  Here is my chair, and here is a special little red folding camp chair that is just his size.  What is so special about this chair is that it once belonged to his mommy!


Here is a link to the blog post I did about these chairs a few months ago:
Little Red Camping Chairs
25 years ago I saved up labels from Heinz baby food and sent them in for personalized little red camping chairs. They are made super duper durable and have lasted through many camping trips back in the day, and are still in great shape.  I have saved them all these years, hoping to have little grandchildren to sit their butts down in them!  We have one with Erin's name on too;  Chelsea and Allegra will sit in it when they get bigger. 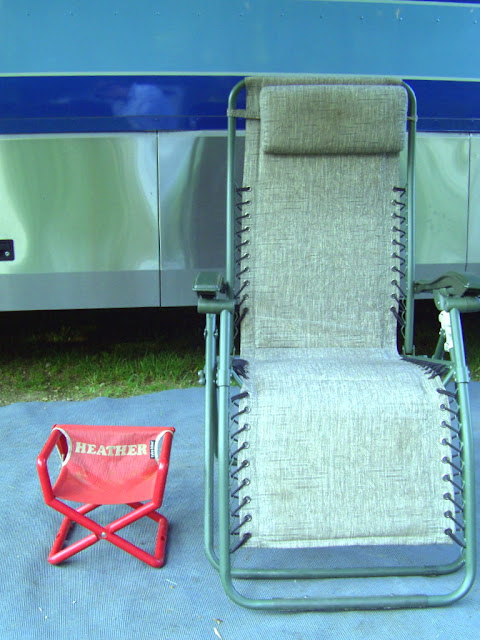 It was time to cook up some supper.  I asked Jameson what he wanted to eat.  After all, it  *IS*  his special day, right?   Of course, he chirpped HAM!~  which is his current favorite food of the month.   I baked up some tater tots, his second favorite food.  Not the most nutritious meal, but he ate it all up like a good boy.  We set up his little chair in front of the cooler as a little table, and he dined like a King. 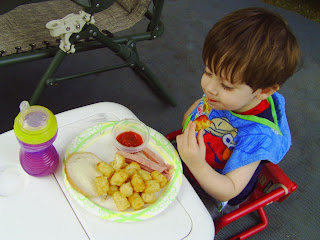 Once supper was done, it was time to explore some more.  But not too far...  Silly boy HATED the feeling of grass on his toes!   He would not leave the tarp area in his bare feet.  Kinda reminded me of those Invisible Fence devices for keeping dogs in a yard!  hahahahaha 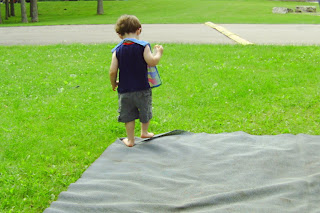 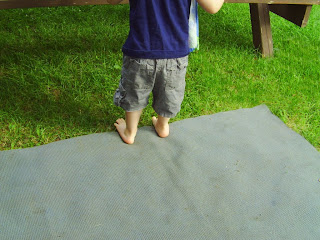 Well, we put shoes and socks back on him, and we did another lap around the park.
I let him toss the garbage into the big recycling dumpster.
He liked sorting the bottles, cans and paper.  Gotta start 'em young to recycle, ya know.
We put in some fun playtime running around, ball playing and getting some fresh air. 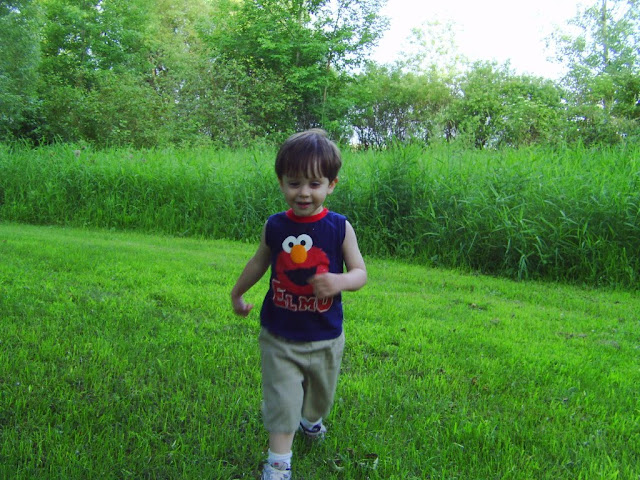 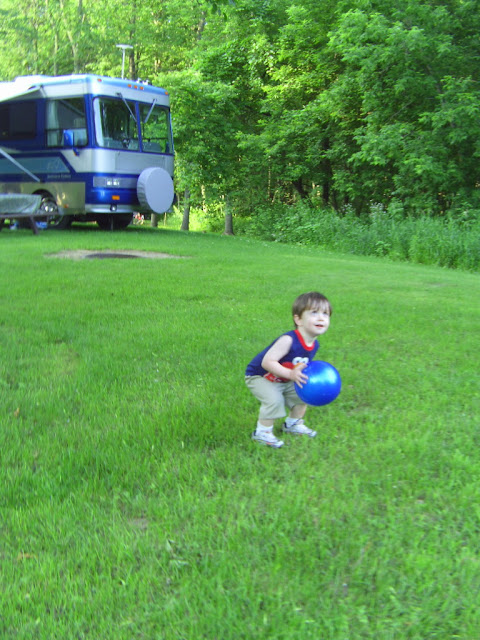 Finally-- it was time to head inside.  He did a little bit of coloring while I was doing up the dishes.
See how my footstool makes a good seat pulled up to Steve's little coffee table for him to color on?
And of course we have his Blues Clues sleeping bag all rolled out and ready for bedtime.
(once he falls asleep, I will transfer him to the portable crib for safety, otherwise he might roll off the couch) 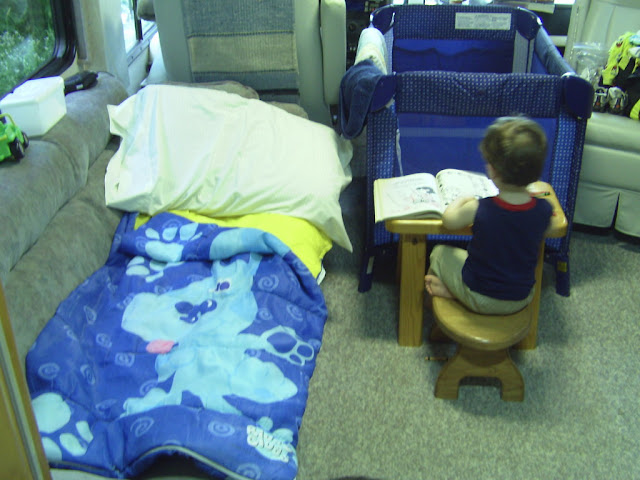 I told him it was bath time and he RUSHED to get the stack of Cup-O's (Discovery Toys Measure Up Cups) his favorite bathtub toy.  These are also saved from when my kids were little.  Here is a link with more info:
Discovery Toys Measure Up Cups
I bought sets of these stacking cups for each of our kid's baby showers to have when their wee ones came into the world.  They sure are a favorite toy.  Jameson tossed them one at a time into the tub as it was filling and then I stripped him down and popped in the tub to play. We are fortunate to have a tub/shower combination in our motorhome instead of just a shower stall.  It is roomy enough to sit in, or set a rack of drying clothes in, or for two people to take a shower in together. (it saves water ya know!)
Heather has not wanted him to have a squirt "gun" at his age, but I checked with her on giving him a squirting dinosaur.  The only problem was that Jameson wanted to see the dinosaur's face each time he held it and pushed the lever to squirt.  It would squirt right in Jameson's face!!!  He couldn't get the idea that you had to aim it outwards and squirt other stuff! ... Oh well, he will figure it out sometime soon.   It was fun though. 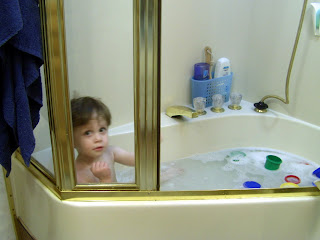 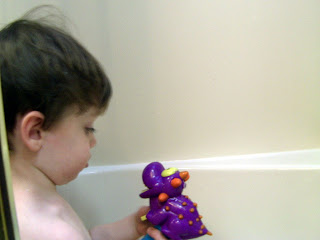 Once he was out and all toweled dry, he slipped into his Sponge Bob jammies and was ready for bed.  He settled right down when I turned on the tv to a musical RENT.  Once the music intro part was done and the talking started, he was out like a light.   I transferred him into the portacrib and he didn't move a muscle.  I guess all that fresh air did him in.   He slept all night, and at 6 am I felt a wiggly bump up front and then a small cry from him.  OH OH!!    I jumped up outta bed and looked up front and here the big collie, Duchess, had jumped onto the passenger seat and plopped INTO the crib with him!!!!  Of course it woke him up---- awwwwwwww   so I took him out and cuddled him for a while back in the big bed.  We watched a cartoon on tv and then started our day.  After a fruit and cereal breakfast, he was ready to rumble!
I took out the sidewalk chalks and went to the parking area across the road.
He knows every letter in his name, and was adding to the ones I wrote.
Then we did numbers, too. He can count to 20, but we only wrote out 10. 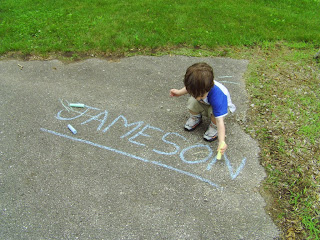 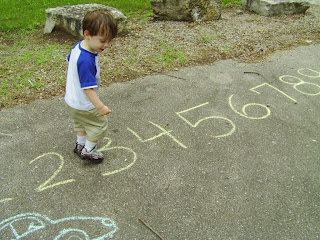 An older boy from a site down the way came to join us.  Helped Jameson with some more artwork. 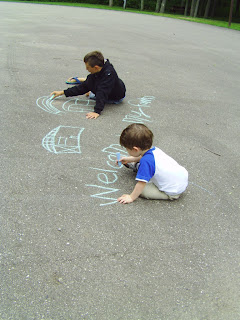 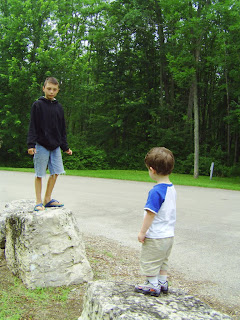 The edge of the roadway is lined with these big squared off rocks. Jameson had a blast, climbing and following the big boy from rock to rock.  Here he is showing me a mosquito bite, itched into a big red welt! 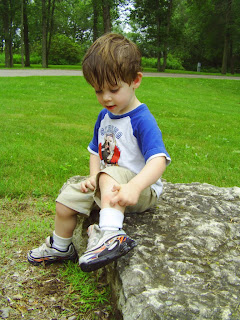 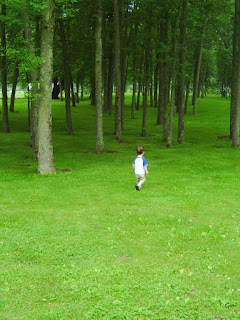 We had a great morning, and took a few walks,Jameson hugged a few trees, crowed at a few birds and picked up a few branches to play with too.  Exploring natural things is part of being out in the woods.
Soon it was getting close to noon, so we had to get ready for his parents to come to the campground, along with Erin Mark and Chelsea.  We were going to celebrate Erin's birthday and our anniversary with a nice meal cooked in the turkey fryer.   (Alaskan Snow Crab legs-- not fried - but steamed with salt water)
I will do another blog post on that.
.

Posted by KarenInTheWoods at 1:02 PM