Ahhh---   it's time now for Allegra to have her turn at "Camp Grandma"!    Erin was heading to Green Bay for some service work on her SUV,  so she offered to pick Allegra up and bring her up to the campground for me!  Otherwise it's 46 miles one way to go get her and another 46 miles to bring her to me.   In the meantime, Mark brought out Chelsea for a few hours on Friday, and Erin planned to pick her own daughter up when she dropped off Allegra.  Erin and Mark only live about 8 miles from the campground.


Both little girls were excited to see each other.  They had some Cousin Bonding Time in the portable crib... 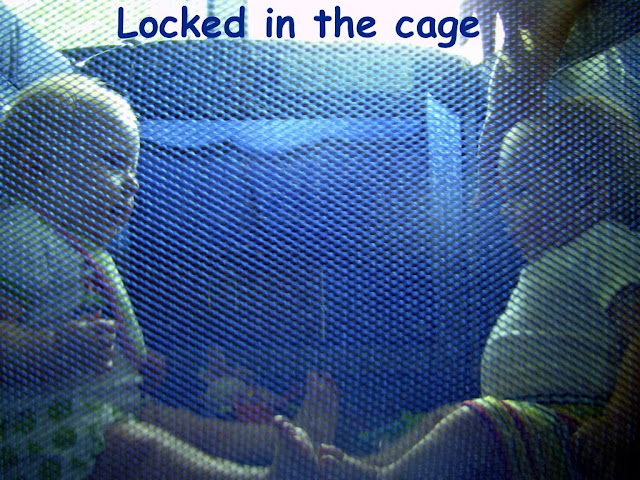 They were just hilarious as we sat them in there together... 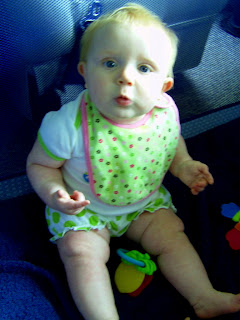 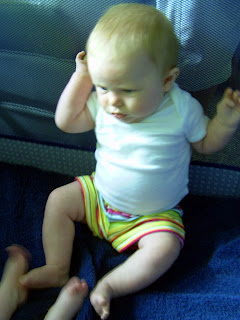 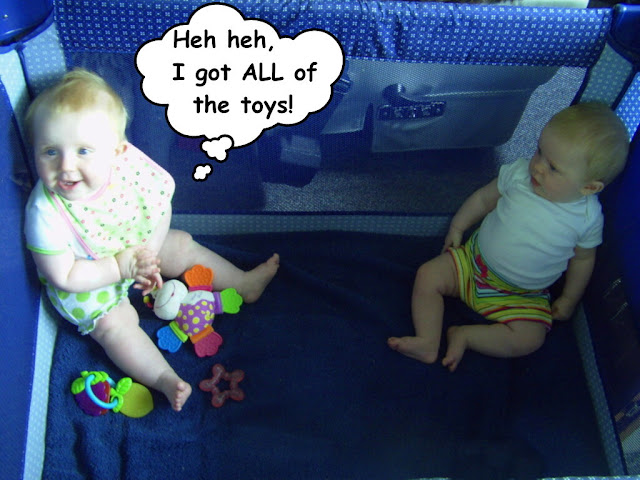 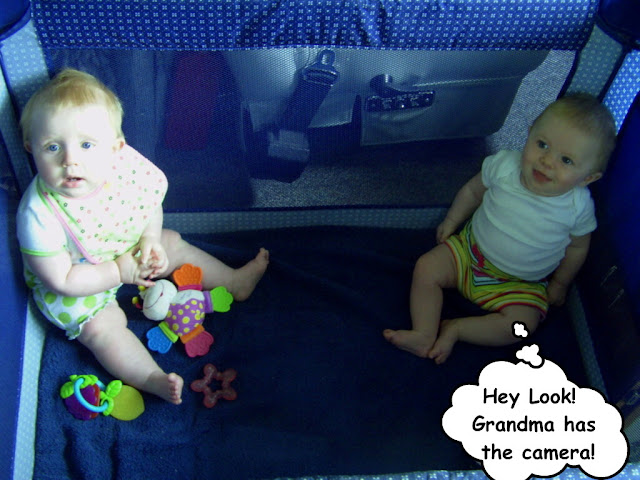 They are 6 months and 5 months old.

Soon it was time for Chelsea to go home. 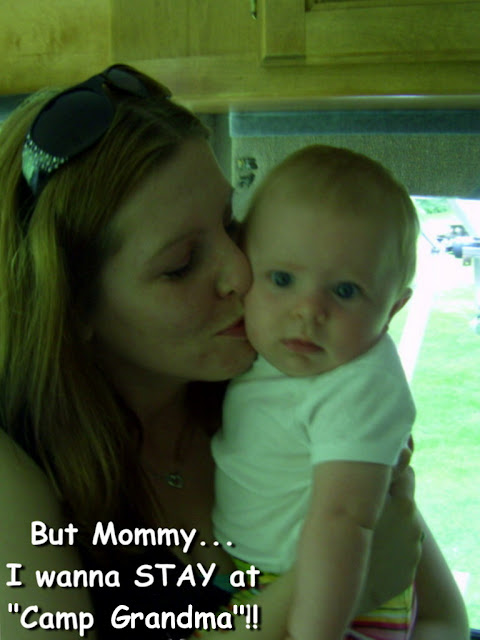 Now it was Allegra's turn to have Granmuddah Pfun all to herself!
Just take a look at the shirt she is wearing:
"THAT'S IT!   I'M OFF TO GRANDMA'S!" 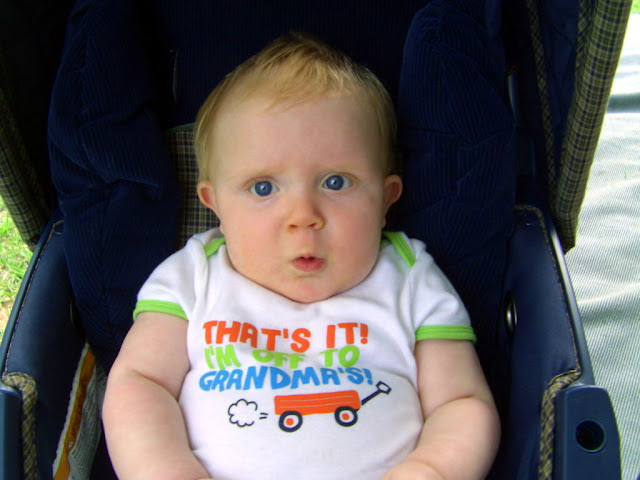 Erin left her stroller with me, so we could get in some laps around the park with Allegra too. 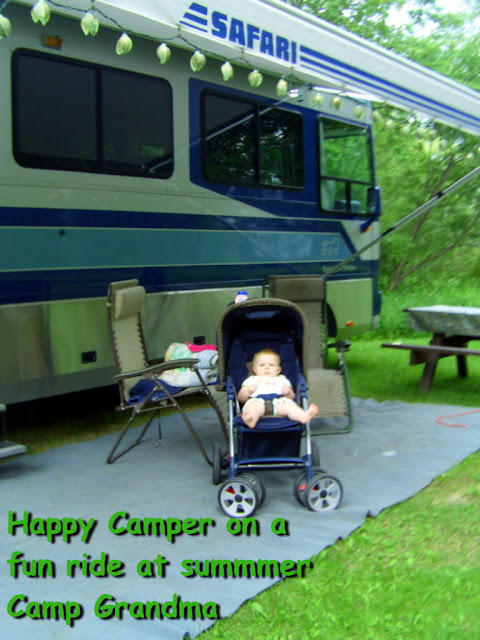 She sure loved rolling along. 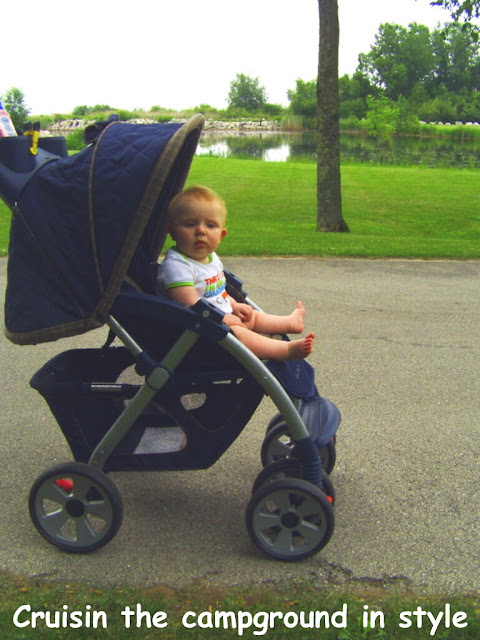 We put on a little sunscreen and enjoyed the playground area.  Wee Allegra was squealing with delight at the dinosaur, but she sure got VERY serious and quiet when I let her ride on it. 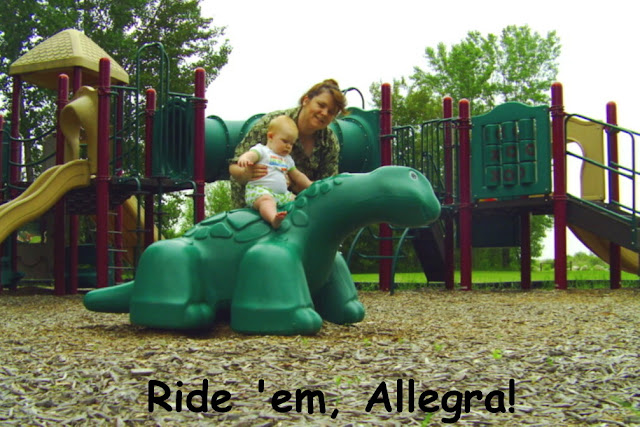 The day was warm and muggy, but it sure didn't bother her.
The more we walked and played, the more she crowed and squealed. 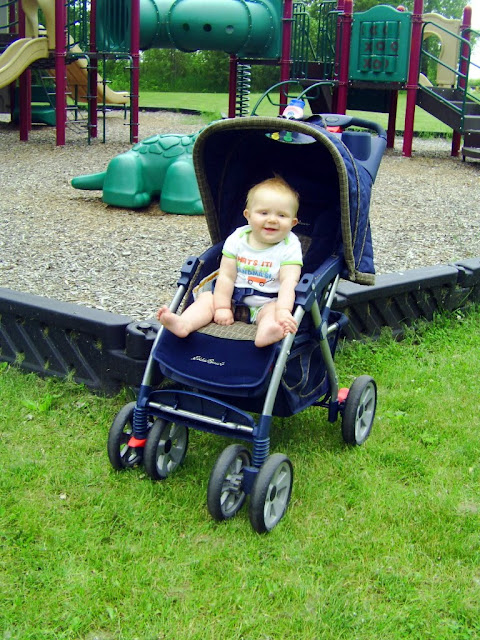 Back at the campsite, Allegra was put to work with a new job. 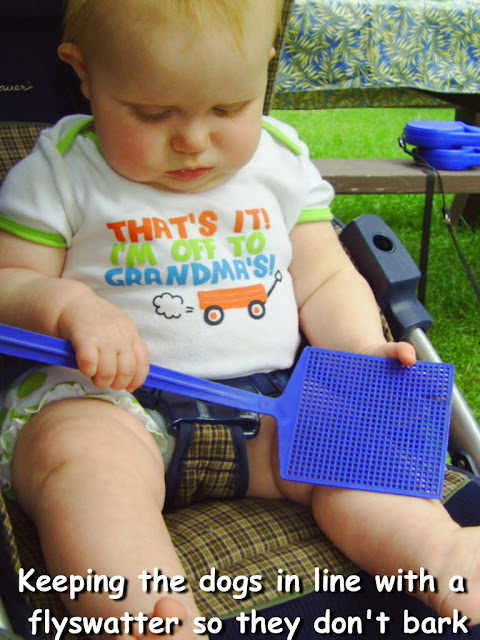 They are both good camping doggies, but need to be reminded from time to time that barking is NOT allowed at all.  So the flyswatter does the trick.  Most of the time. 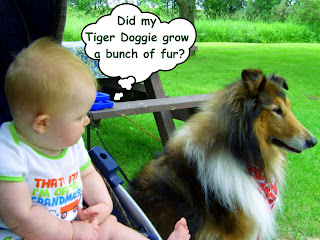 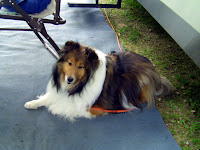 We sang songs as we cruised around ... but by now the campground started to fill up with weekenders.
We had to kinda cut down on the singing and squealing so we didn't disturb the peace! 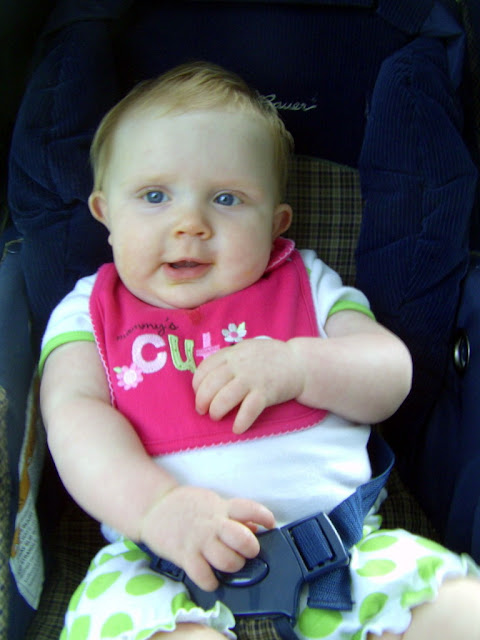 We ate supper and took another walk around the campground. All of the sites were now filled up, and it was getting busy with folks coming and going.  It was interesting to see them set up.  Some haul out nothing but a lawn chair or two.  Others pile out everything but the kitchen sink onto their campsite. Saw 2 tents go up on the site behind me, around the corner.  Then about 8 or 9 young people were there.  I thought "Oh oh" on the noise factor... but they were very quiet, polite and respectful of the campground quiet hours.  How nice!
Soon it was time for beddy bye, but first we had to bounce on the great big king sized bed just like Chelsea got to do.  Jameson always does too.   Ya know, come to think of it, any time we ever rented a hotel room when the kids were small, we let them jump on the bed too!  LOL 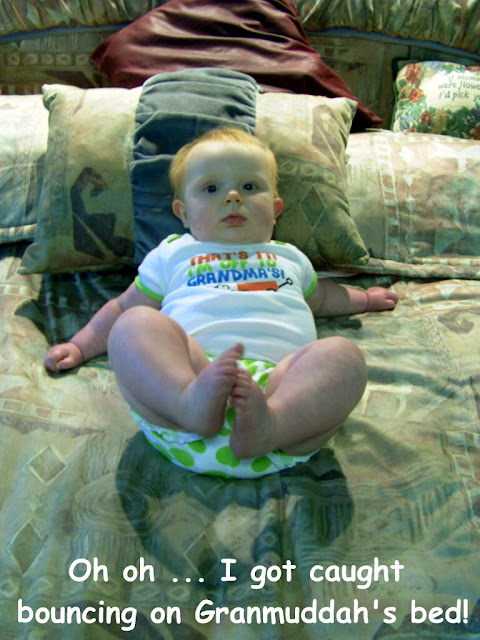 After calming her down a bit, I read her some stories, got her into her jammies and it was time to doze off. 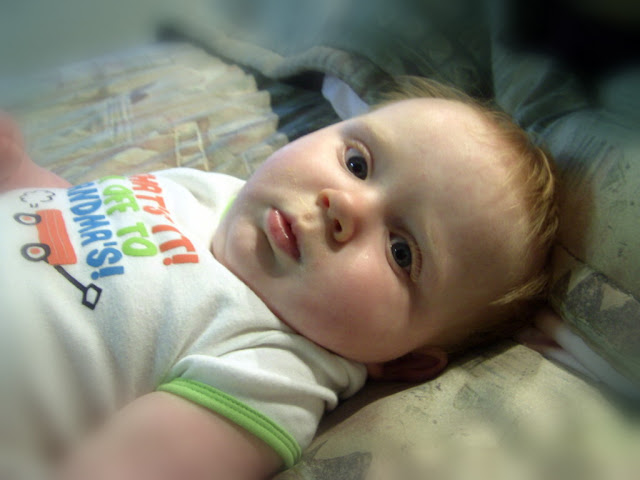 She was zonked out by 9pm and slept all night long in the little portable crib.  It rained a bit overnight, but not too bad.  She woke up all smiles and happy baby grins.  We ate a little breakfast and played with some toys till things dried up a bit outside.  We had time for one more lap around the campground, and dump the trash bags over at the recycling bin on the way around. 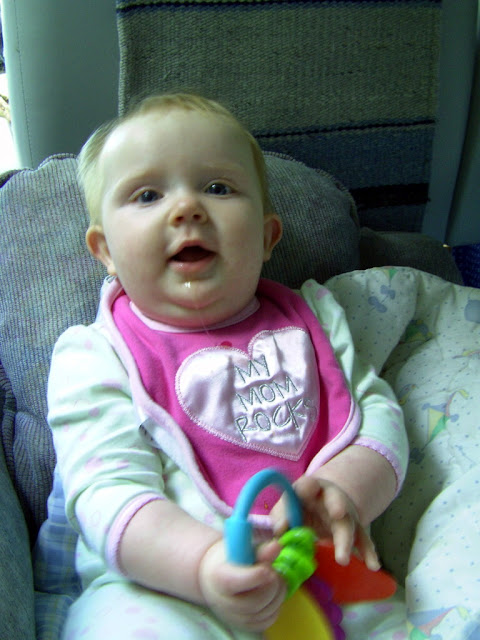 It was getting hotter and hotter and very muggy and hazy.  I had originally planned to leave the dogs in the motorhome, with the AC on, but the neighboring site was having trouble with their electrical box, so I was thinking perhaps it might go off by my site too.   Not wanting to leave the dogs for 3 or 4 hours in a hot motorhome, I decided to drive to our house and drop them off there while I ran errands to Green Bay, and do the baby drop-off and pick-up of Jameson.
I reached Green Bay about a half hour early for dropping Allegra off at  our daughter-in-law Heather's place of work.  So we went to Erberts & Gerberts sub shop for my absolute favorite sub sandwich.
http://www.erbertandgerberts.com/
When I worked in Green Bay, our office would order from them at least twice a week.  The favorite of mine was the Boney Billy... turkey meat, alfalfa sprouts and guacamole ... yummmmm!   So Allegra sat in the little high chair and I fed her applesauce while they made up my sub.   Then we went to Heather's bank and Allegra got to see her mommy in action and finish up the day' work.   With hugs and kisses, it was time to turn her back over to her mommy.  Awwwwwwww
I had about an hour for errands till Jameson was ready to join me (they had a charity benefit walk for Jesse's dad out in Rio Creek WI to help offset his medical expenses of being in a coma for 3+ weeks last month)
I hit Walmart and picked up 8 pounds of Alaskan Snow Crab legs they were saving for me.  Then a few other items and I was of the store about $100 poorer.  How does that happen????
I met up with our daughter Heather, Jesse and Jameson at the mall parking lot and we did the big handover of the grandson ... the next camper who is slated to come to "Camp Grandma"!
(tomorrow's post will be all about HIS day with me...)
Posted by KarenInTheWoods at 6:54 AM