Brrrrr 23 in the desert and a Day in Mexico

Brrrrr we woke up to 23 degrees.  Saw a guy scraping his car windows.  Seann has a frozen water hose.  Good thing he fills his tank up and can use that until his hose thaws.  All blue sky and should warm up nicely today, no winds, and gonna warm up for the weekend.  Or so they say?

We joined RVers Dawn and Jim for a day down to Mexico!   They were driving so we got to ride along with them.  (the Tracker won't be done till next week)   Seann stayed behind as he is still not feeling up to snuff, but also wanted to get his laundry done.

We crossed the border with no issues going in, and we headed right to the Power Vision optical shop for Steve's new glasses.   For an eye exam, frames, and progressive no line bifocals it was $140.  The funny thing is that when they examined his old pair of glasses he came in with, the eye doc said that his prescription was for a person 70 years old! LOL... well, once Steve got the new glasses (2 hours later) he can see why!  Because he can see much clearer and better and sharper than he ever has.  His old glasses are only one year old, and they never fit right, never had a good bifocal for him and they would "warp" straight horizontal lines into arc shapes for him.  Well, the new ones don't do that and he is very very happy!   And I think he is handsome too.... Don'tcha love his shirt??? 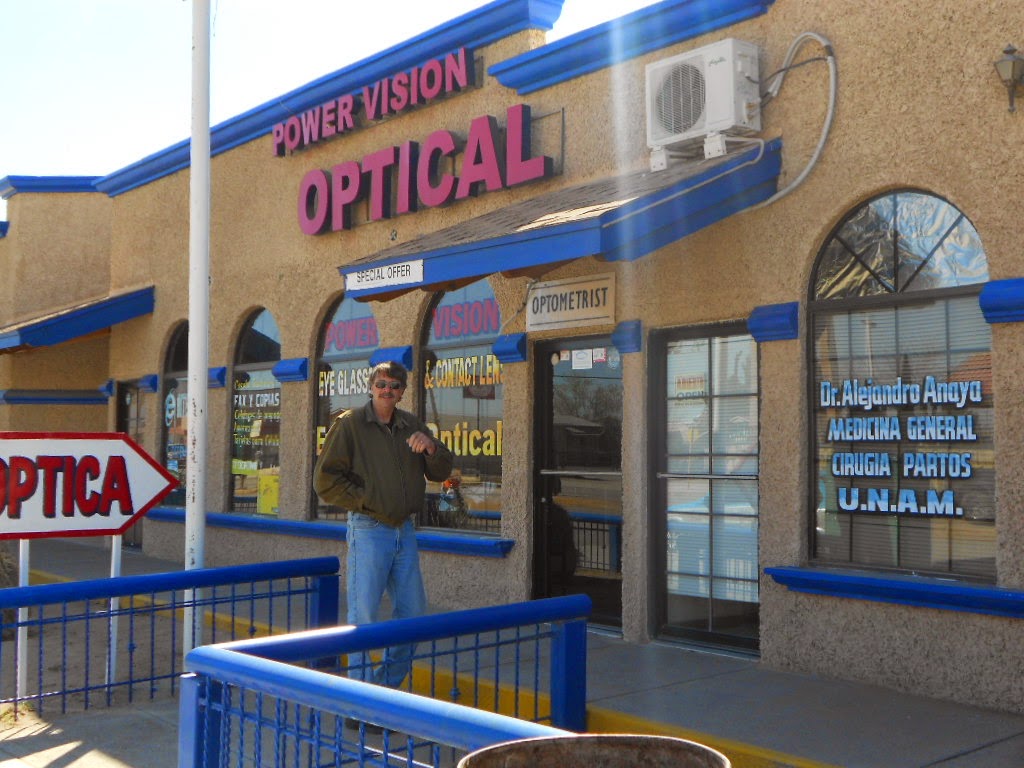 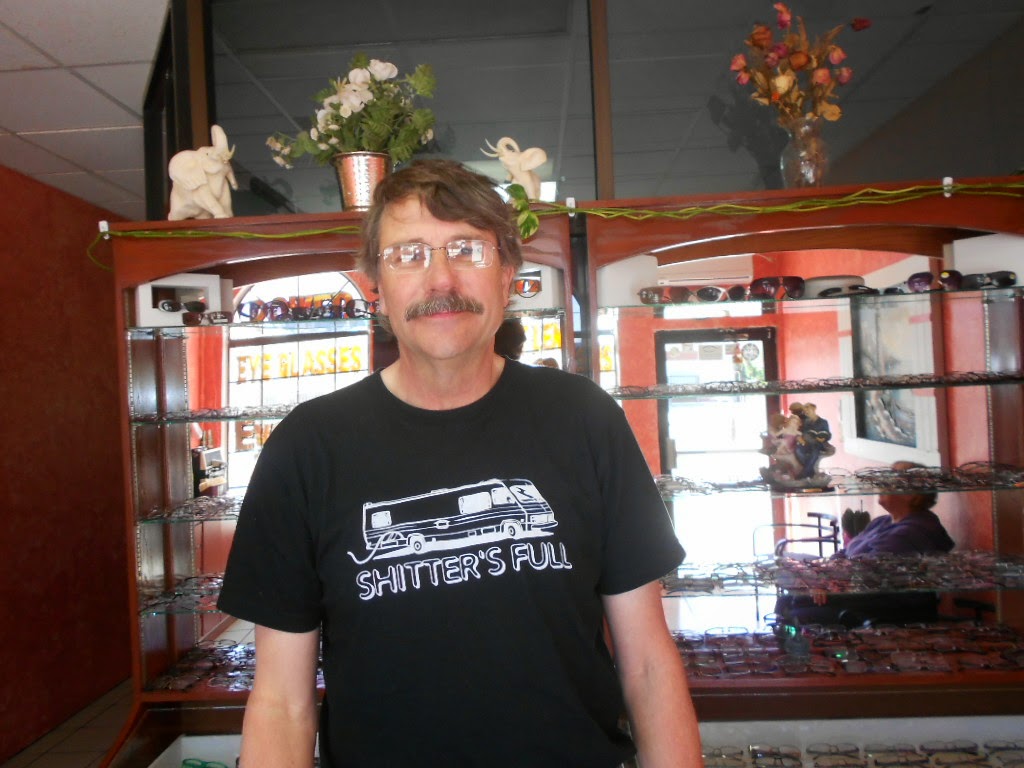 From there, we wandered back to the barbershop where both Jim and Dawn were getting haircuts. We wandered over to check the price of dental cleanings at the clinic where Steve got his fillings last week.  Only $40 for a cleaning!  Then we wandered back around to view a few of the interesting sites and items being set up for the weekend festivities. They are celebrating Pancho Villa Days this weekend, and I am sure both towns on each side of the border will be a buzz with festivities.

We did the obligatory tourist shots with a cool Mexican Dusty Desert Town background.... 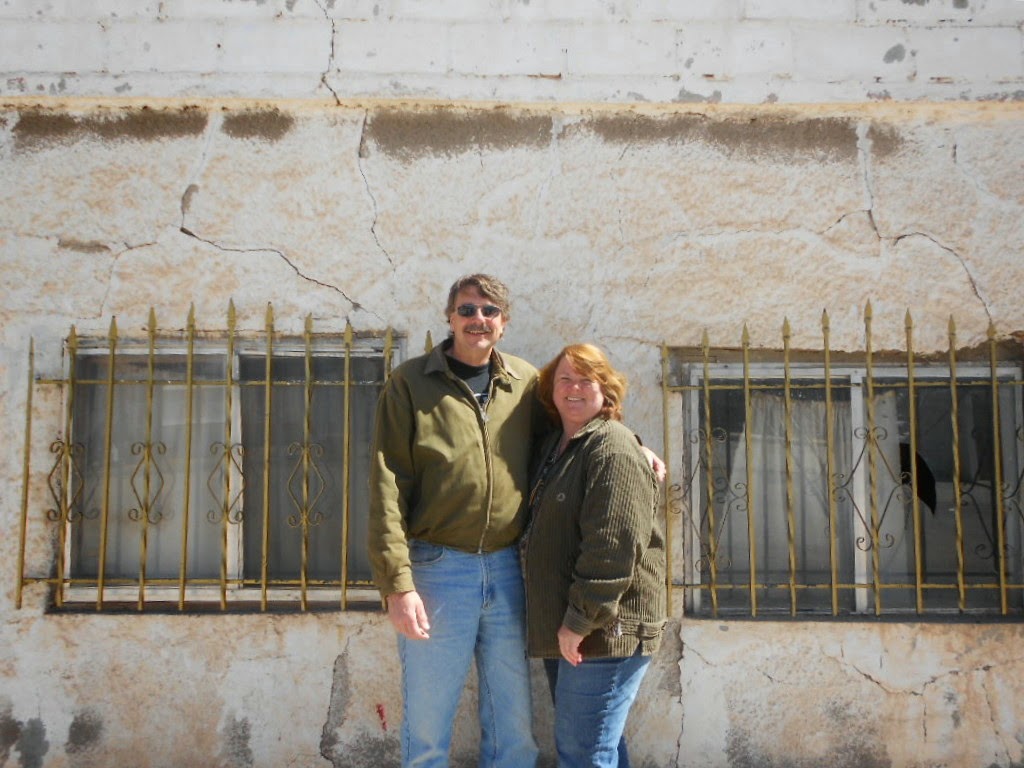 Dawn and Jim from Washington, USA 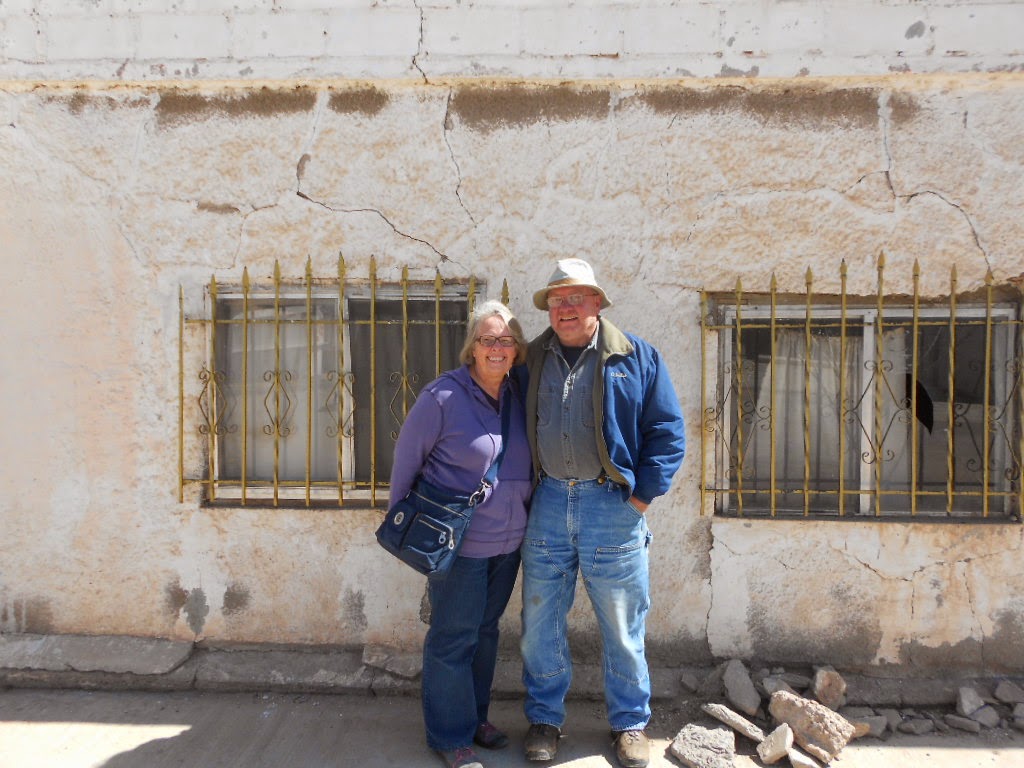 A restaurant 2 blocks over was recommended by some folks to Dawn and Jim, and also we asked the eye doc where to go to eat ... and all said this place was the best and they went there themselves. 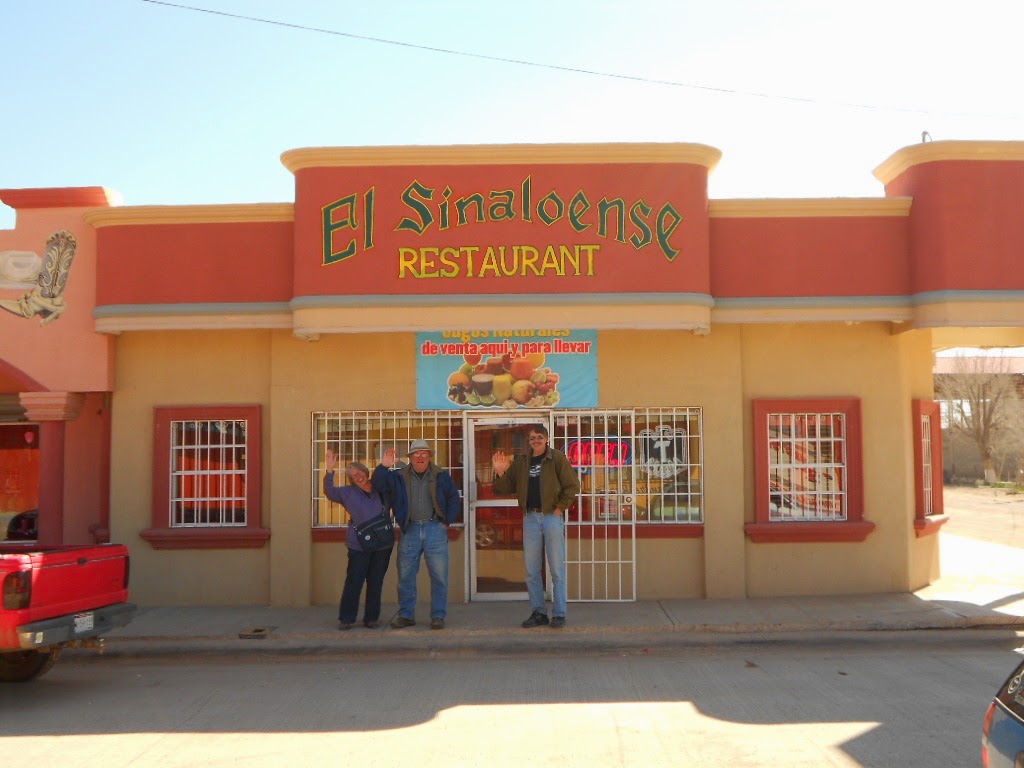 We all ordered something different, and the portions were plentiful.  I could not even finish my platter, but everything was totally delicious! Then that sneaky sneak Dawn paid our tab and we didn't even know it.  Thanks Dawn and Jim for the great lunch! 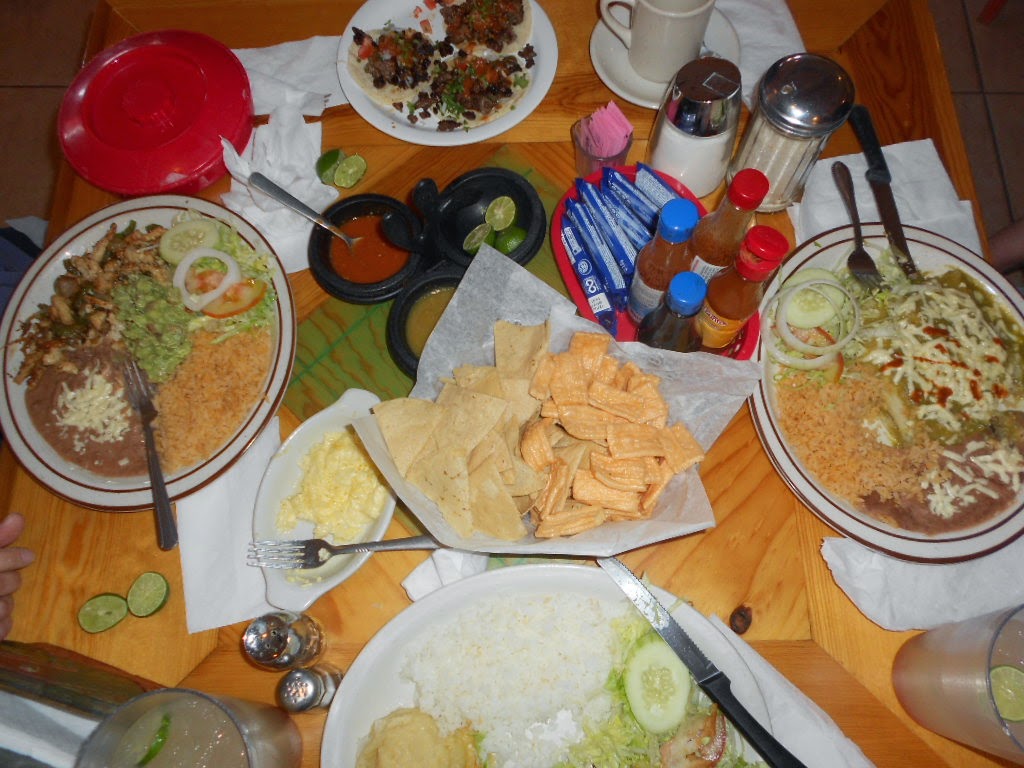 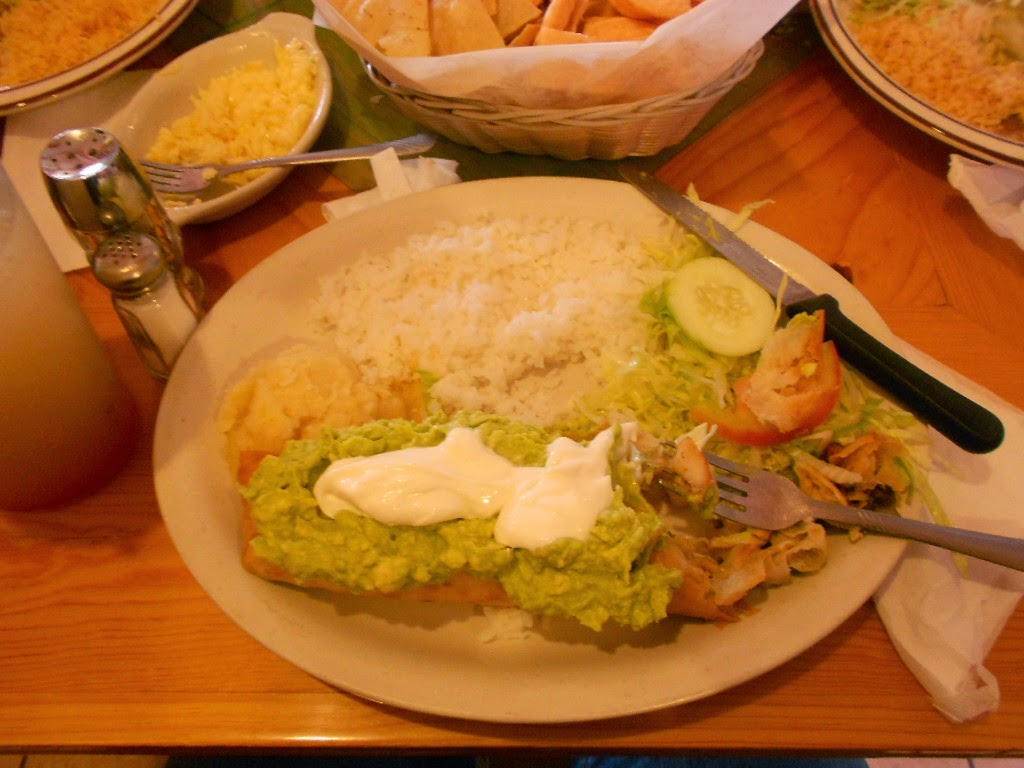 Of course there were strolling musicians looking to entertain us, but these three little tykes stopped to pose for a photo instead. Much more entertaining! LOL 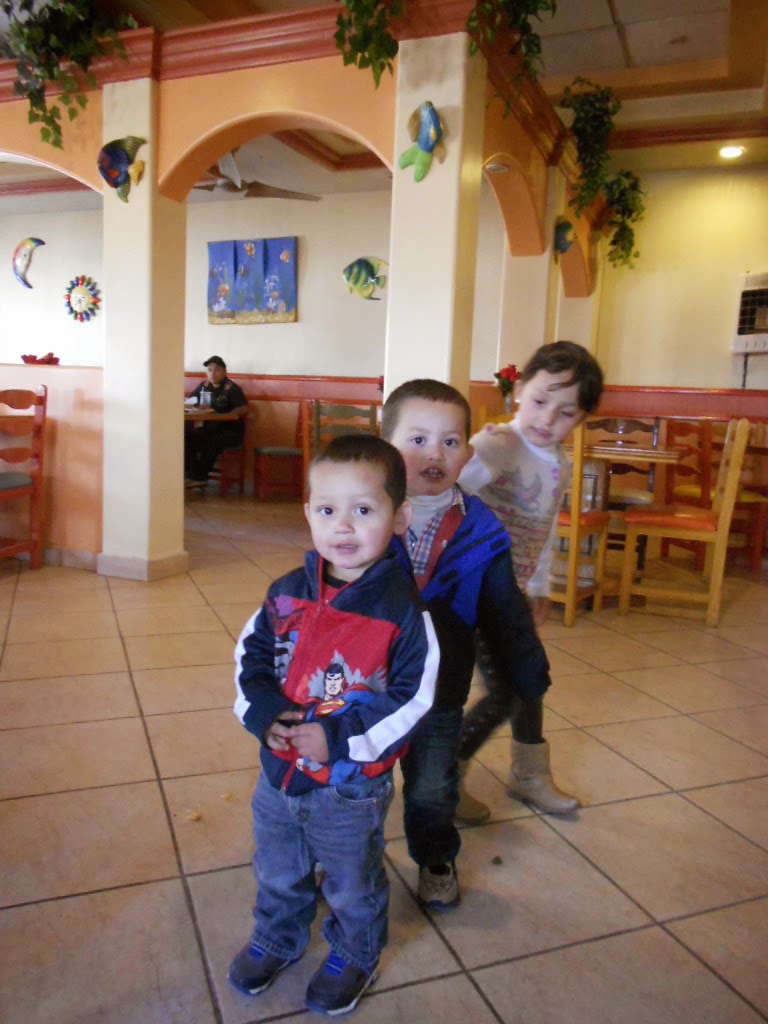 As we walked down the street, I saw a man enter a building.
I glanced in the door, and I saw a Mexican Bakery!
Ahhhh we just HAD to go in,
even though we were full from our meal. 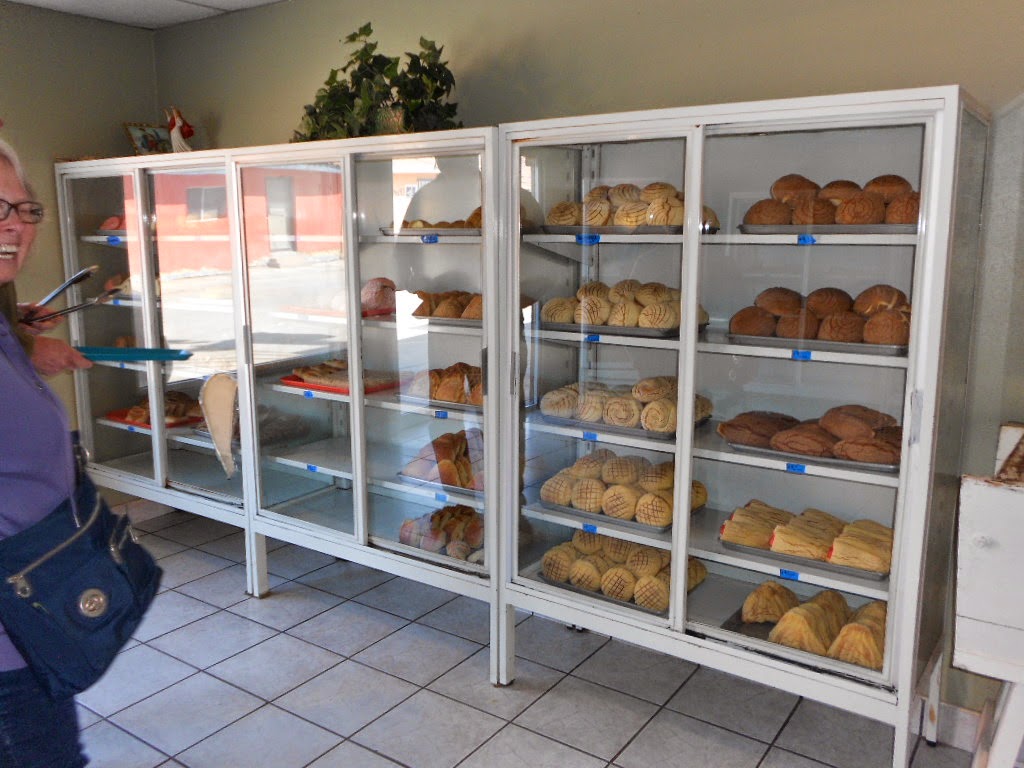 You choose a cafeteria tray and tongs, and pick out everything you like from the cases and the gal adds it all up and bags it for you.  That whole tray full of goodies and the bags alongside came to less than $5.00.  We took it all home to eat with our coffee the next few mornings.  I had the cream filled horn this morning.. yummmmmmm 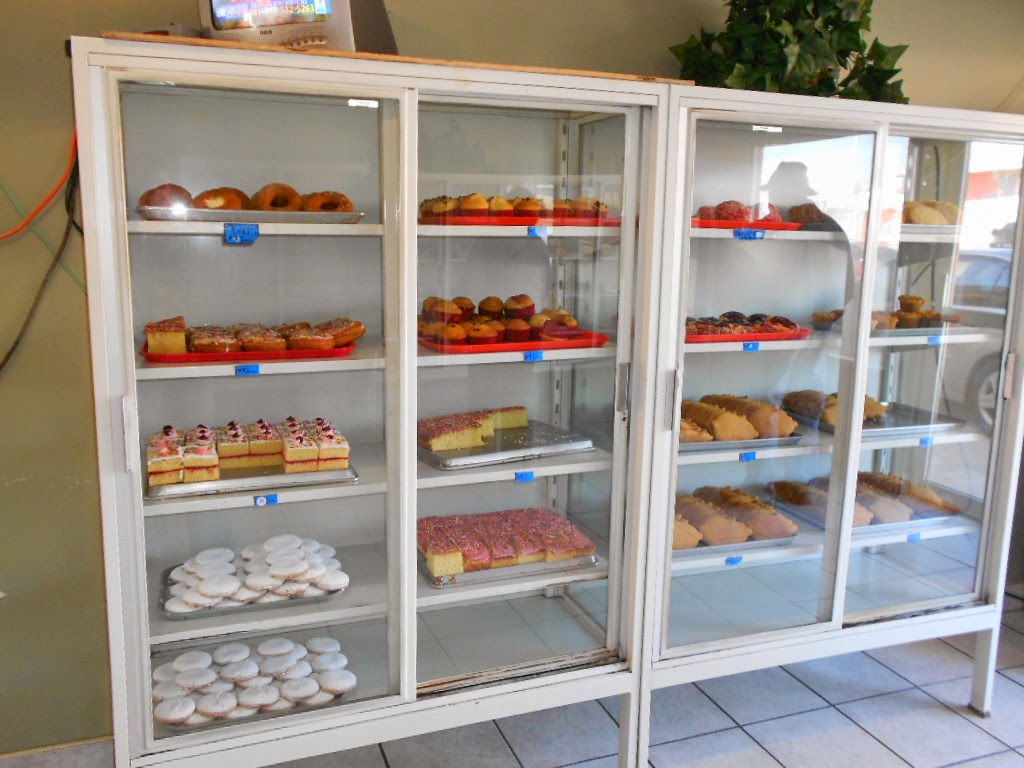 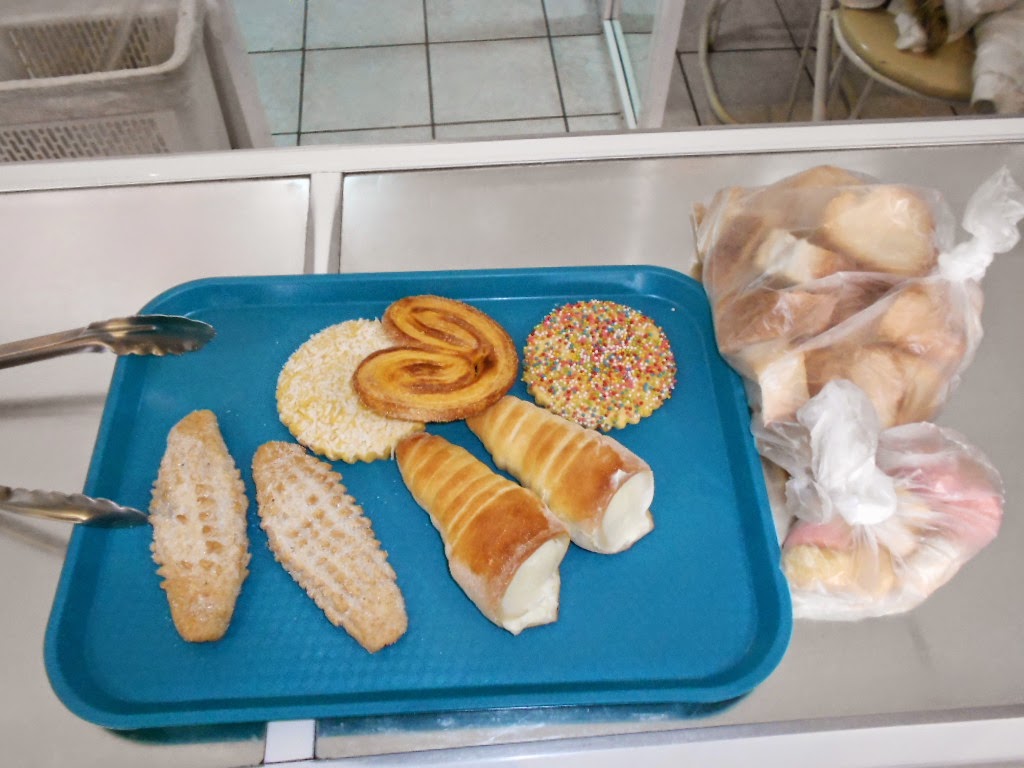 We went back to pick up Steve's glasses and they fit well, and were done to perfection.
He is happy and satisfied that it was money well spent on his sight.

We wandered over to The Pink Store to do a little tourist shopping.

I found so many cool things and we left with three bags full.. here are some shots of inside the store. 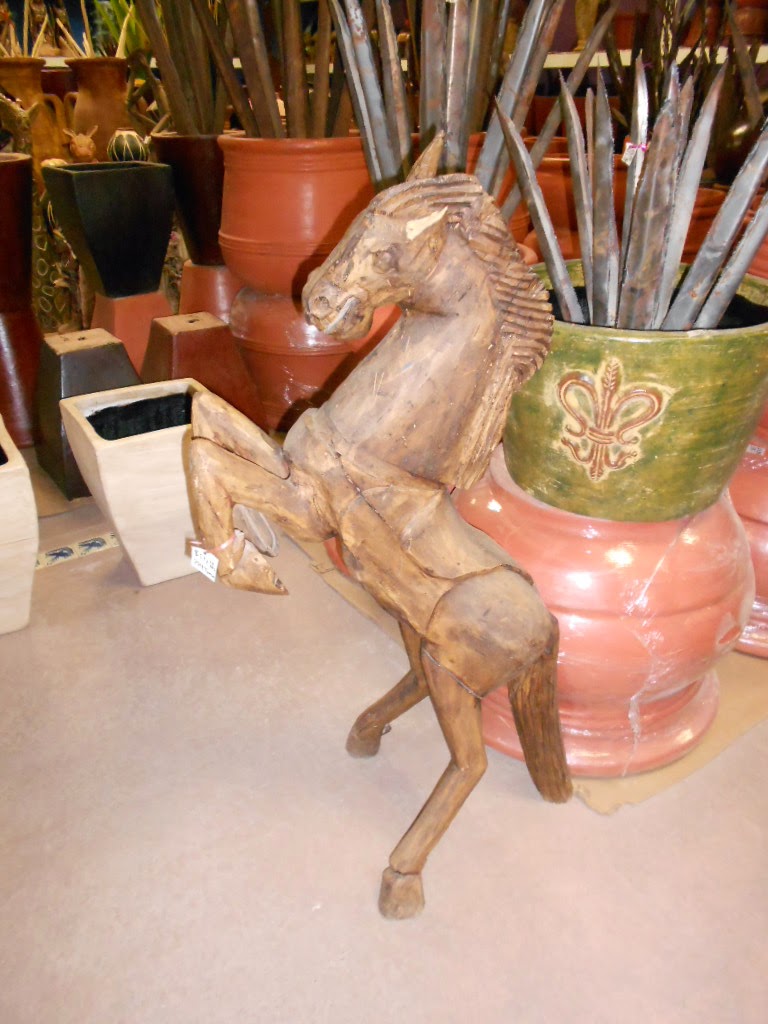 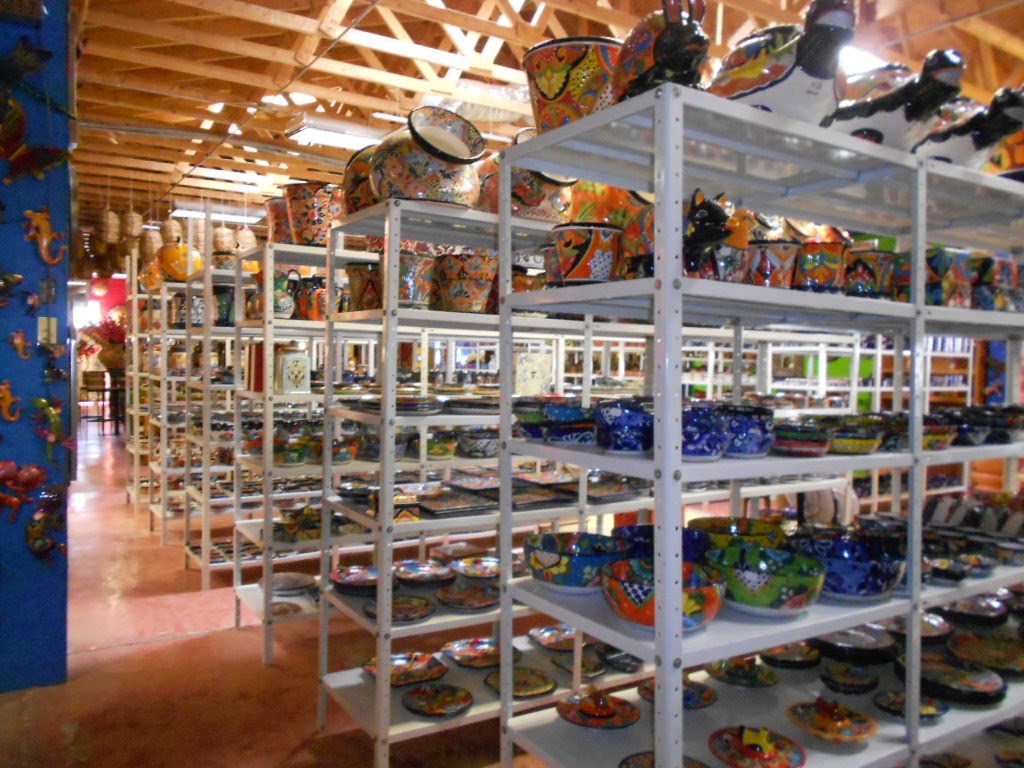 Most everything is grouped by the artist who made the items, nothing trashy or China Import junk... 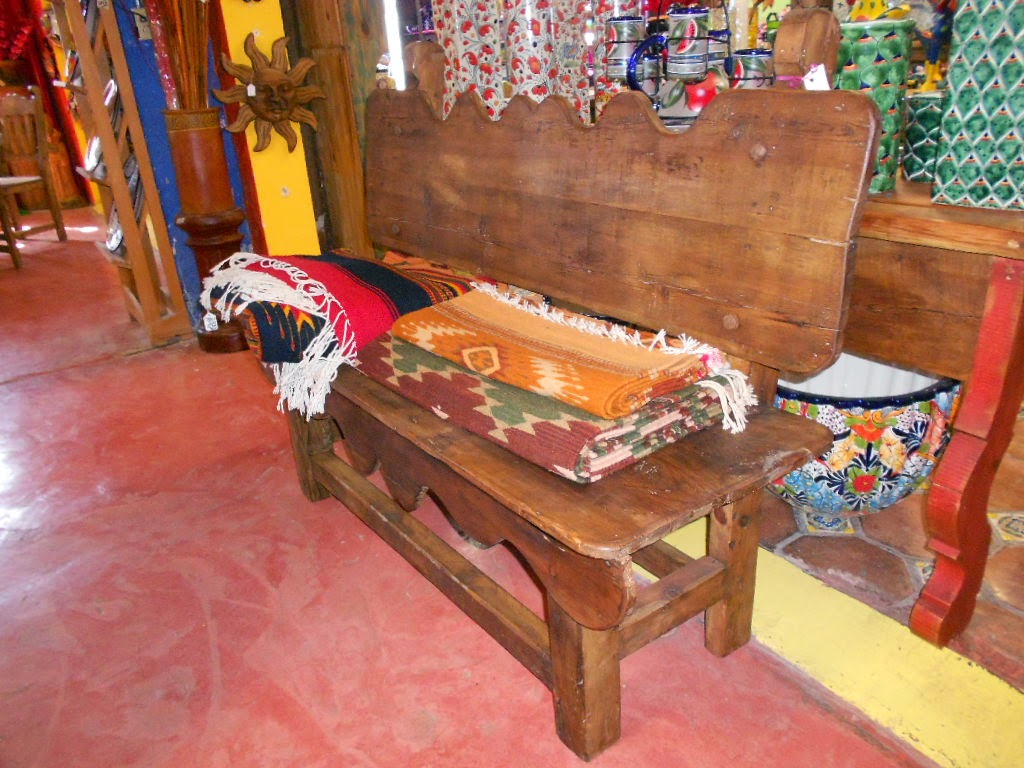 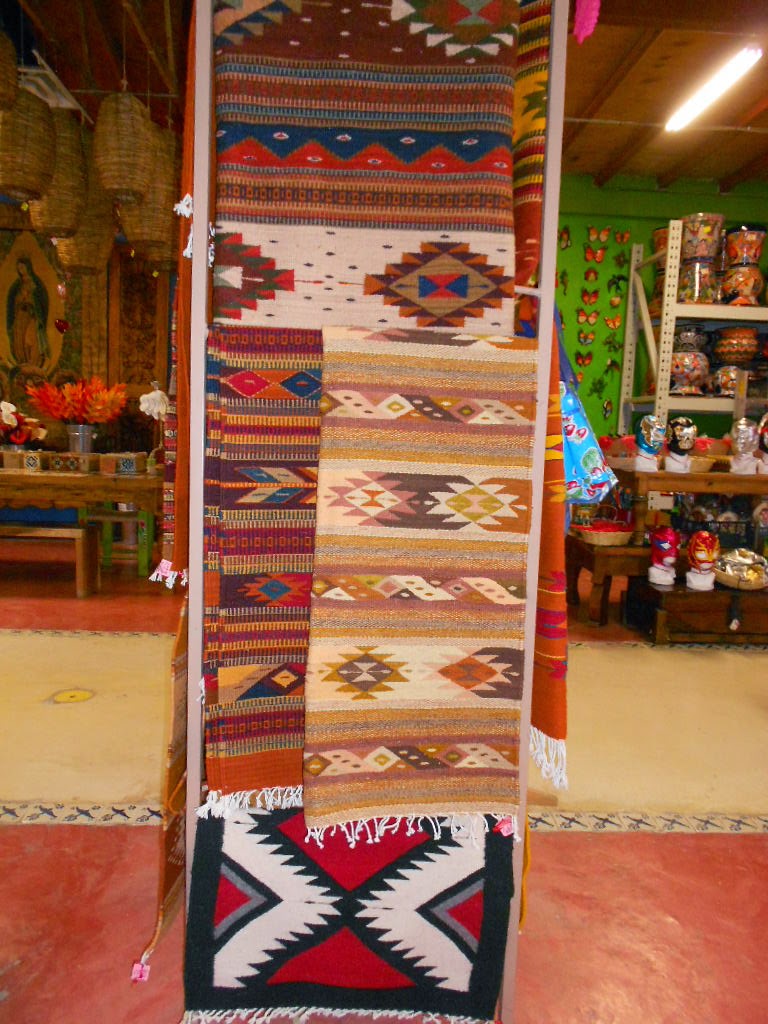 All of the textiles and pottery items were so nicely displayed too. 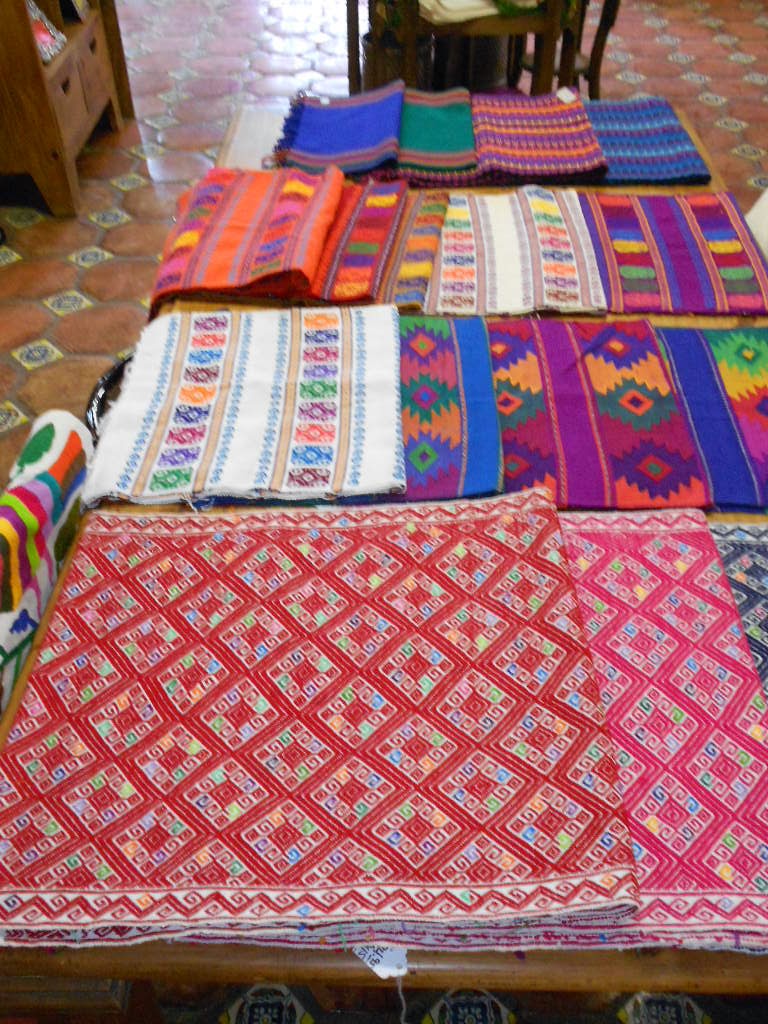 We crossed back over in the United States with no waiting, no issues or problems.  We stopped at the Duty Free Store on the US side and bought some booze and perfume, which the booze has to be brought back over to the Mexican side and come through with Steve holding his passport to get through the customs again with it. Saved some money on his favorite Johnny Walker Black Label Scotch Whiskey and my Elizabeth Arden Red Door perfume.

We said goodbye to our lovely escort chauffeur service, and headed into our RV to put away all of our treasures and take a rest for a bit.

Seann came over and was feeling a little better. He even got in some cuddle time with Binney!!!! 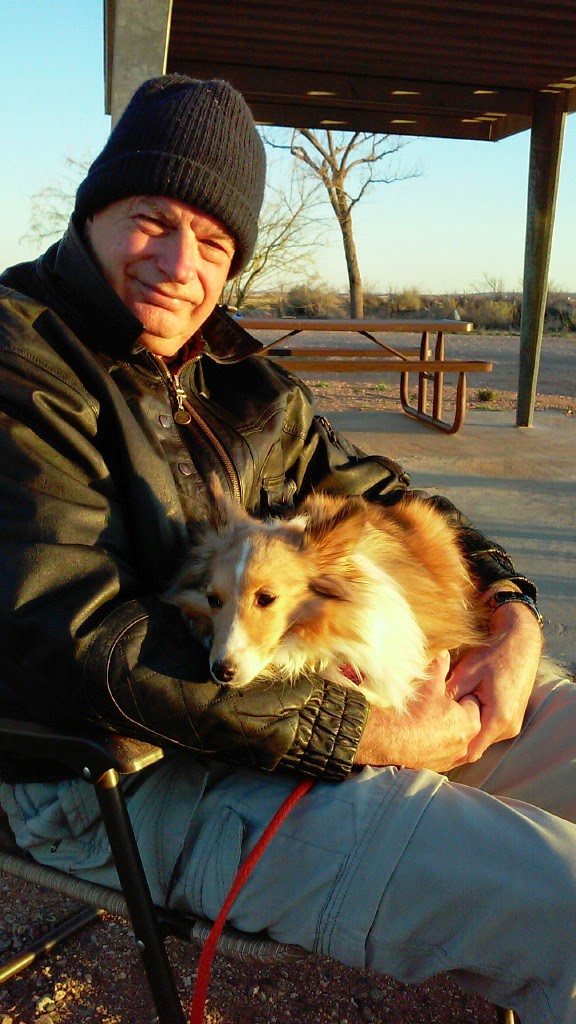 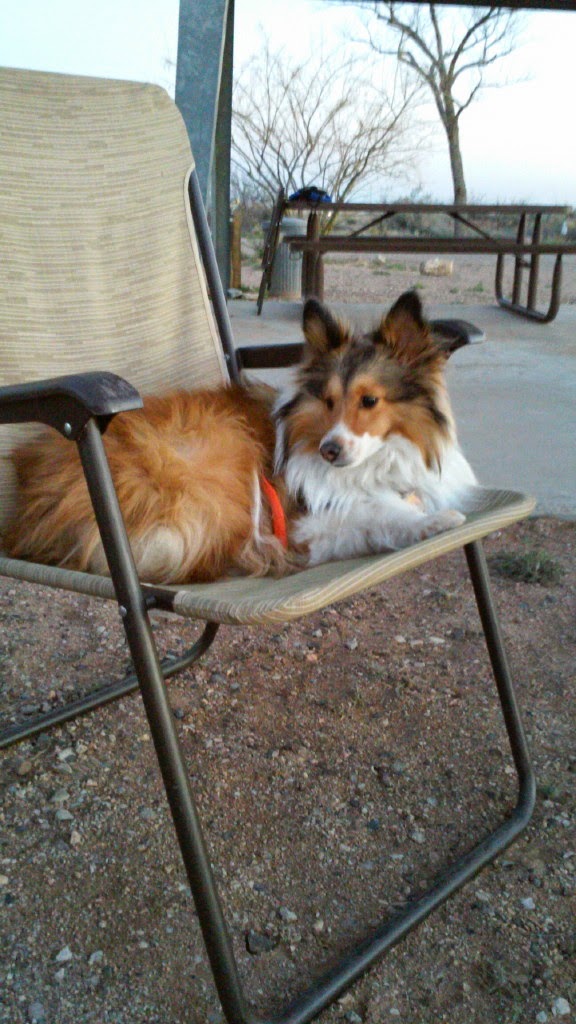 The winds had calmed down and we were able to light up a campfire for the evening.  Someone had left some firewood at our campsite when we had first arrived, so we decided to burn that up instead of Steve's pellet campfire pit. 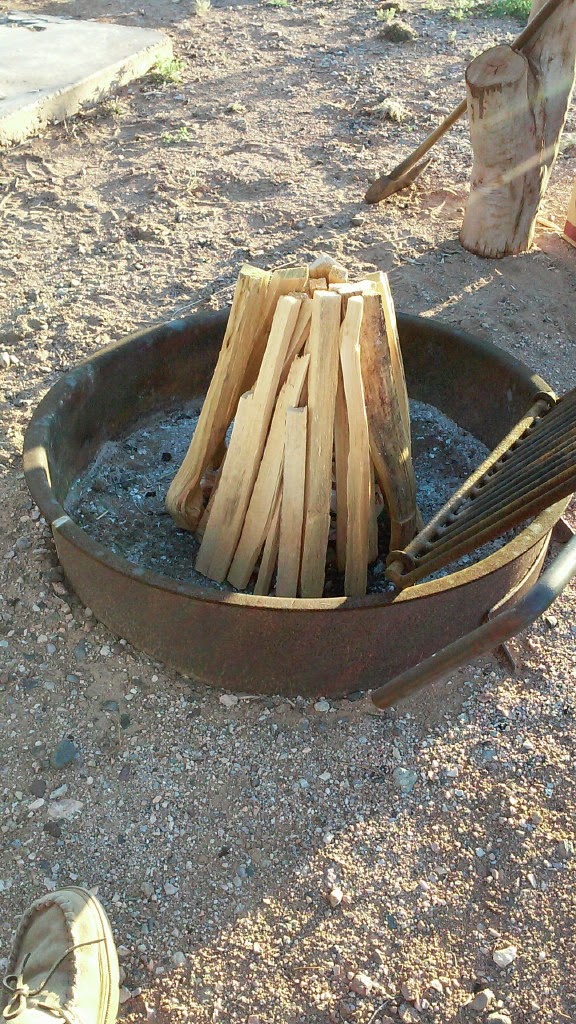 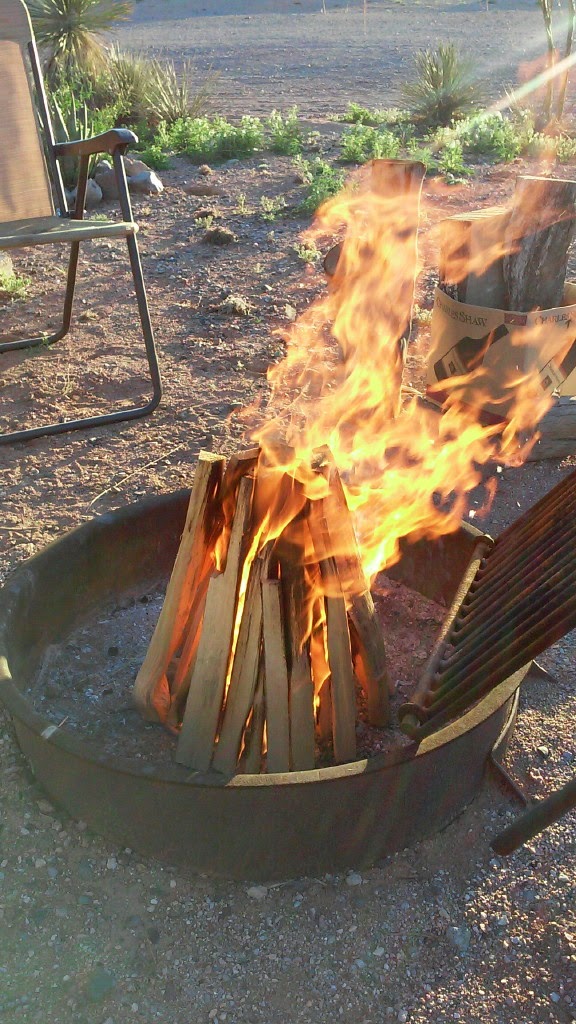 The moon rose up huge and yellow in the eastern sky,
but none of my photos did it justice.

Our campfire was roaring and we were happy to be sitting outdoors
in the middle of winter in the desert.
The fire chased away the chill in the air. Ahhhh we stayed out until the last chunk of wood became glowing coals.

Posted by KarenInTheWoods at 9:31 AM