Well, we knew it was coming, and saw it on the weather reports.  But the morning was calm with some nice breezes but nothing too bad.

Steve had been talking to the park superintendent here, and found out they use a mechanic about a mile away to do all their repair work. And as a matter of fact, that guy recently rebuilt a lady's Tracker who was stranded here in the park with just about the same problem!

So Steve took off across the desert to walk over to the guy's place and see what he could do.  After chatting up a bit, the guy sent two of his workers over to the park to check out our Tracker.  Steve and the host were able to hook it up behind the host's truck, and tow it over to get it worked on.  The guy gave a ball park quote of "worst case scenario" of around $600... but really won't know till he rips it apart.  So our budget is holding it's hands together in prayer and we will see how much will slip through our hands to pay the bill??? LOL

We were rocking back and forth, with dust blasting us from all directions.  We learned a good trick a while back in our last sand storm to run both of our air conditioners on "fan mode" full blast... it creates a positive air pressure inside the rig.  Doing so doesn't allow the dust and sands to seep in through all the cracks and crevices of the motorhome.

We took the poor doggers out a few times and had to hold tight to their leashes so they didn't blow away!  Would have been a good time to brush them, as all their excess fur would fly on over to Texas!  But it was hard to even stand out there, the wind takes the breath away and makes you dive for cover back inside the motorhome.

Outside, it was almost like a brown fog was everywhere... and one could not even see the mountains to the west. If you look in this pic, very faintly you can see the mountains above that horizon of the desert floor. Everything was an eerie yellowish brown hue. 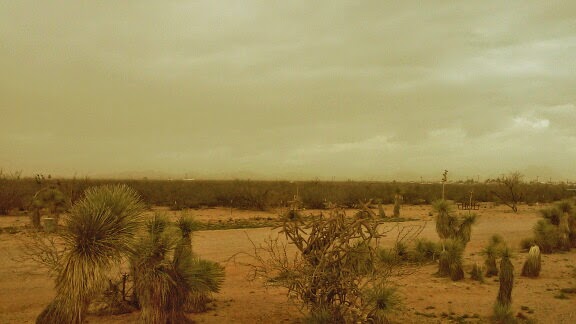 The winds were so bad, we were not expecting our friend, Seann to arrive as planned. He was coming from the west, but had a pretty good tail wind behind him, I should say!

He blew on into the campground as planned, and pulled into the campsite we were saving for him.  (our lawn chairs kept blowing away, so Steve had weighted them down with big rocks!) 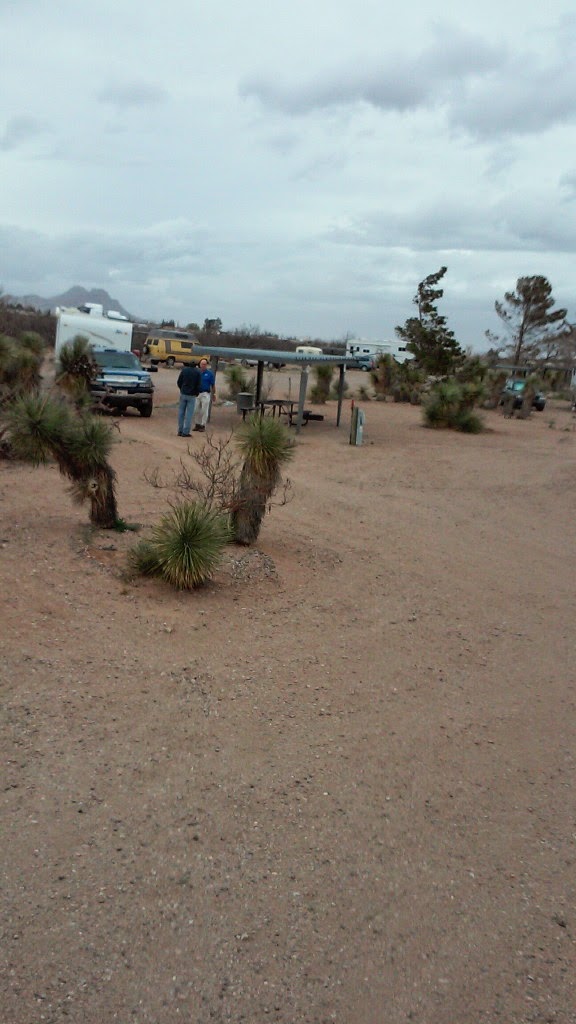 This pic is crooked because I was blowing away!!!!

Seann got situated on his campsite and came over to share dinner with us.  Of course, being the dog lover that he is, he also brought yummy treats for Finney and Binney!   Last time we camped with him, he had treats for Ducky and Duke.  Ducky fell in love with Seann and followed him everywhere, even inside of his camper! LOL....  Too bad Seann is allergic to dogs, or else I think he would have a whole pack of them travelling with him!

We talked into the night, rocking and rolling inside of our motorhome.  The winds sounded even worse as the night went on.  The weathermen said the wind advisory would last till 7pm, but the howling and whistling winds continued on into the night.

By 4 a.m. we could hear the unmistakable sounds of RAIN on the roof!  The winds had died down to nothing, and now it was a nice soft drizzling rain. Ahhhhhhh we will take the rain any time over the winds!

Seeing this out of our window this morning was a pretty sight! 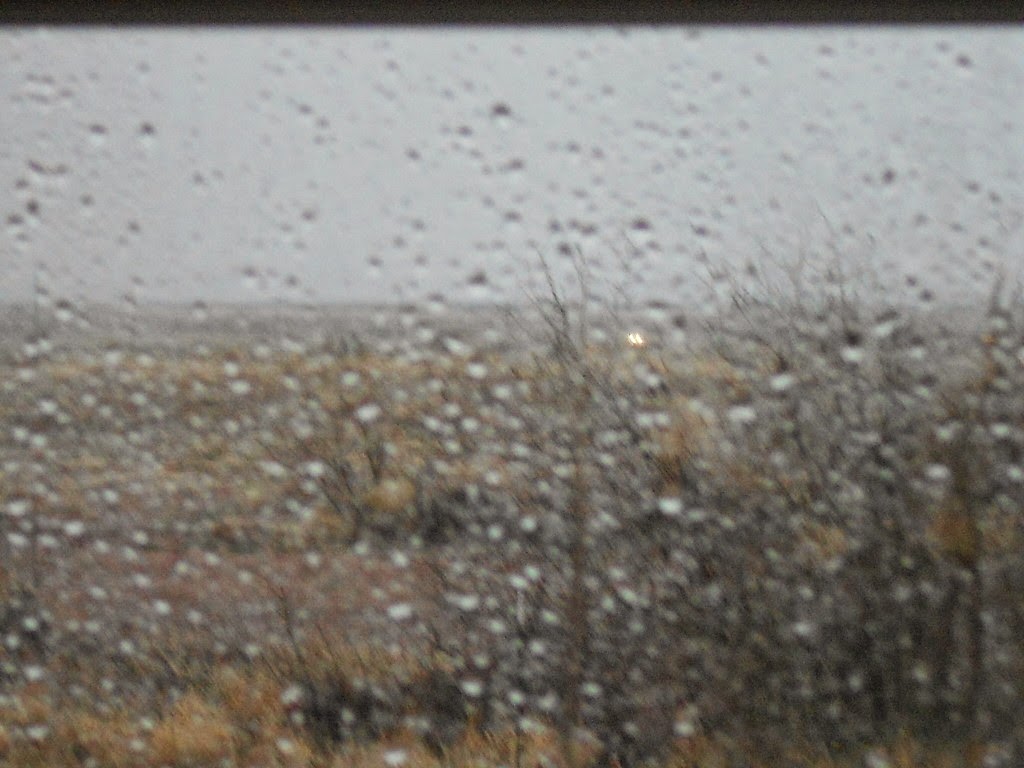 I leaned out the open window to snap this pic, it's blurry,
but yes, Seann is camped behind us. 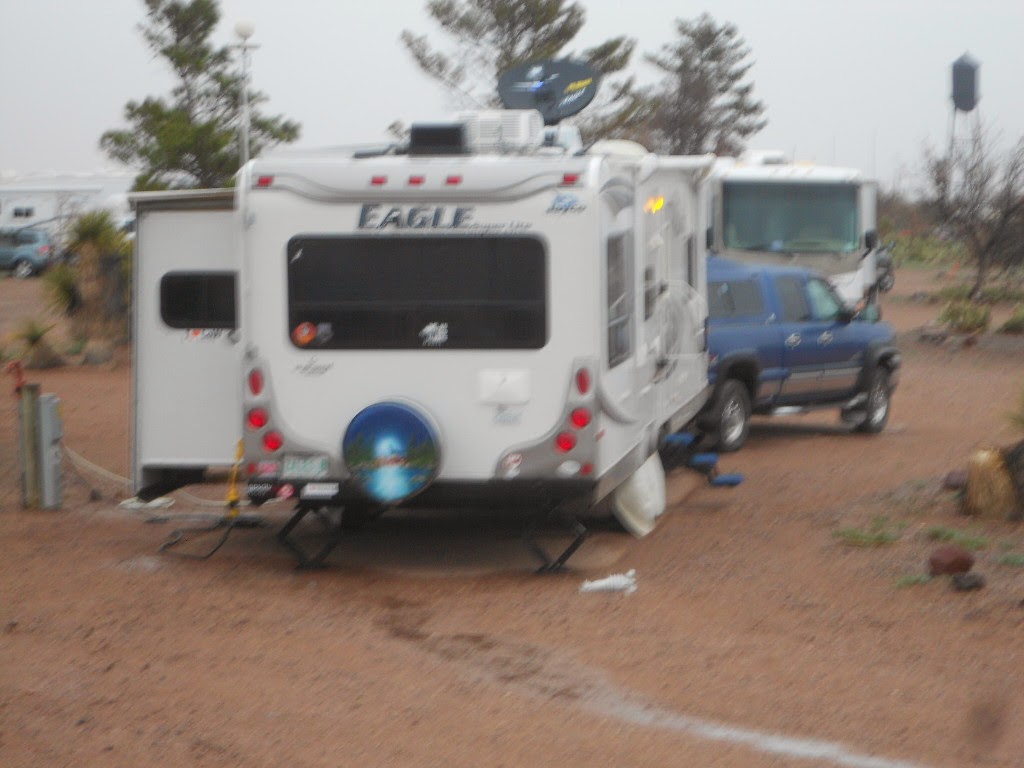 Perked up a pot of coffee this morning, and baked a pan of cinnamon swirl coffee cake...  waiting for Seann to come a knocking and probably come over with his pockets stuffed full of treats for Finney and Binney.

Yup, he just did!

Posted by KarenInTheWoods at 8:39 AM