Another Day in New Mexico at Pancho Villa State Park

Here we are, still snug on our site in Pancho Villa State Park in southern New Mexico.  We are 3 miles from the Mexican border.  The sun is shining again today, after yesterday of on-again-off-again rain.  Life is good and we are happy and warm in the 60's-70's most every day.  The nights get down in the 30's or so, but we are comfortable in the rig. The views every day are wide expanses of desert terrain, with stunning sunsets and a big bright full moon the last two nights.  I tried to take pics of the moon, but they just don't do it justice. Instead, here is a day time pic of our rig. 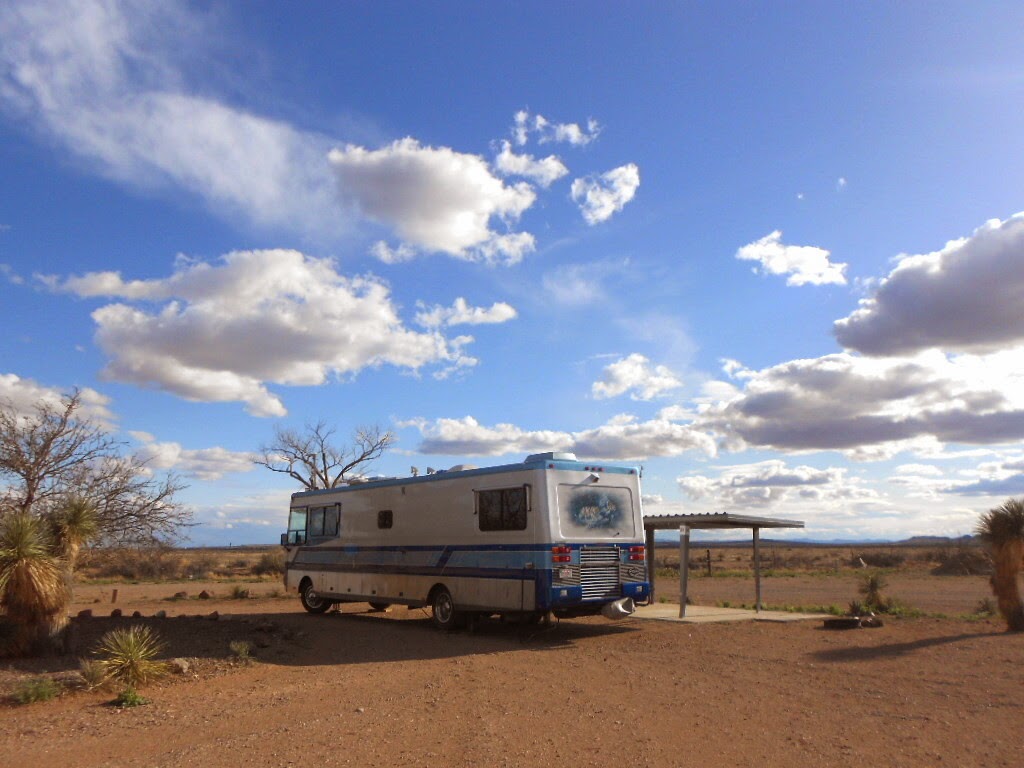 You will notice the Tracker is not in the picture.  That is because it is getting a complete rebuild on the motor over at Art Miller's shop.  He called us this morning to come on over and take a look now that he had the engine out.  The bearing and rod are shot, and we figured he might as well do it all, the rings, valves, water pump, etc and do a good job and get it all done at once.  Even the clutch, as that was getting quite worn. He has to have the shaft spun down over in El Paso, and will pick up all the right parts at the same time.  So it may not be finished until next week.  His ball park quote was good with us, and we will see what it all comes to when it's done.  Oh well.

In the meantime, we are enjoying ourselves immensely!

We are the "Keeper of the Owls" on our campsite and I was able to get a few good close shots of him (or her?) yesterday.  What an impressive looking bird! 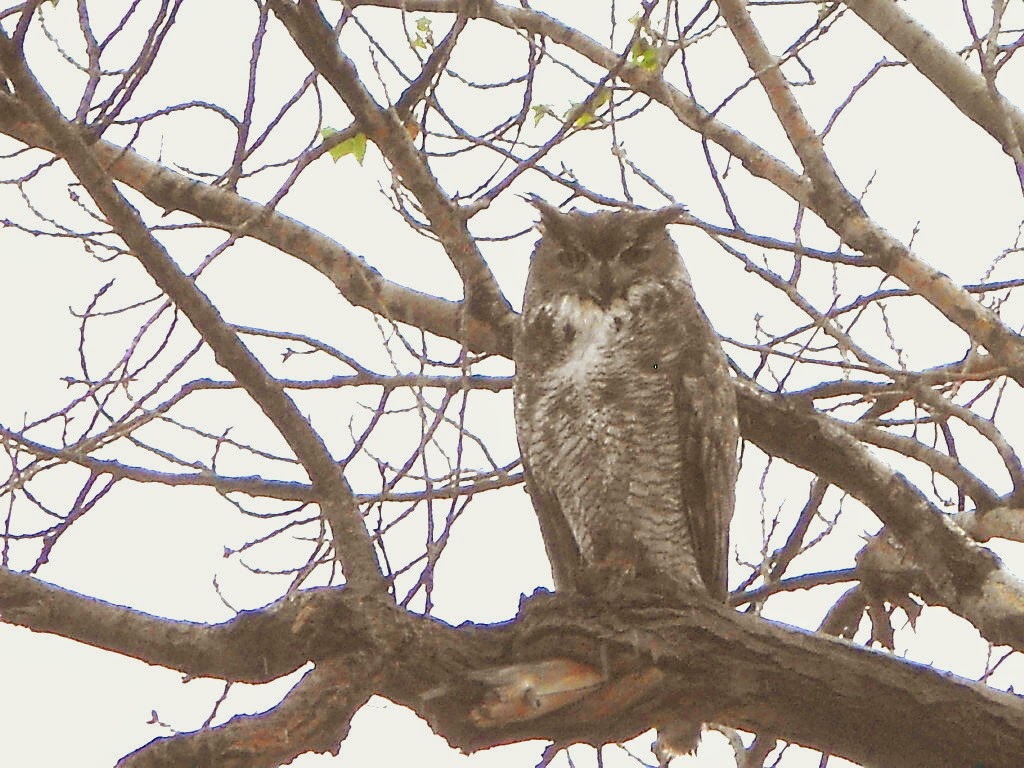 Our friend, Seann, from Canada decided to stay two more days!  We enjoy his company and he is full of fun stuff and ideas and stories.  His rig is all set up on the site behind us.  Seann is an avid boondocker and travels to the U.S. each winter to escape the harsh winters of Saskatchewan,  Then in the summer months, he hosts at various parks in Canada. 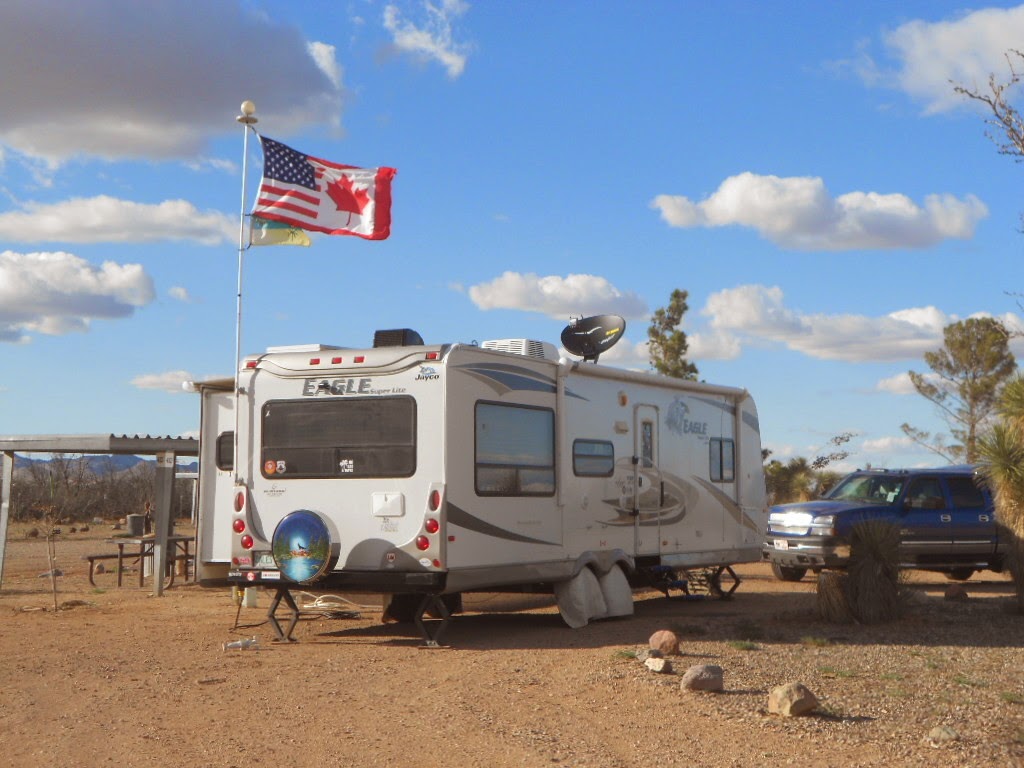 He recently added a few new items of decor to his travel trailer.... a custom painted tire cover, and this lovely stained glass panel in his door.  Quite the fancy rig! 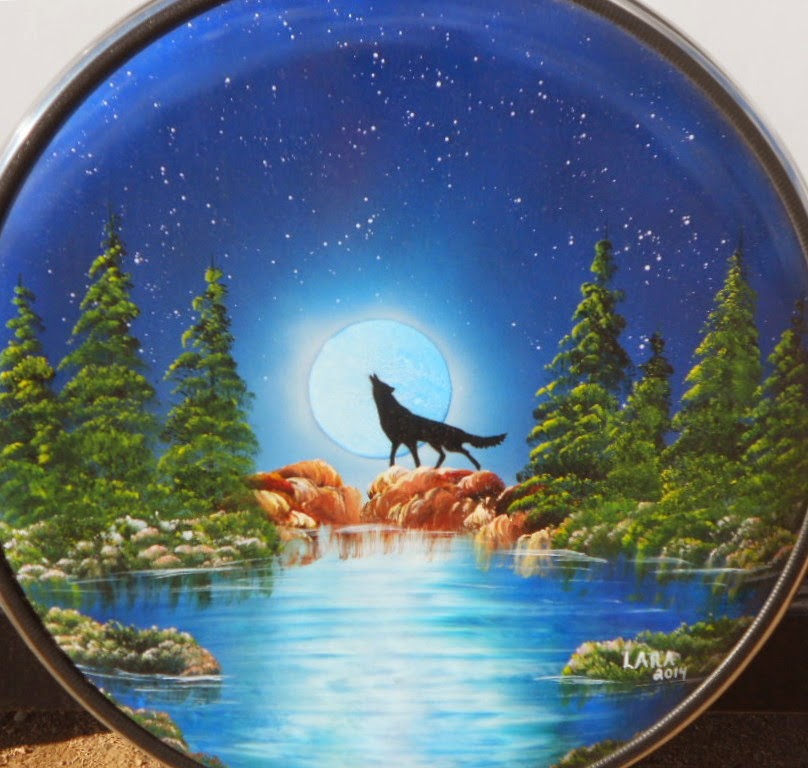 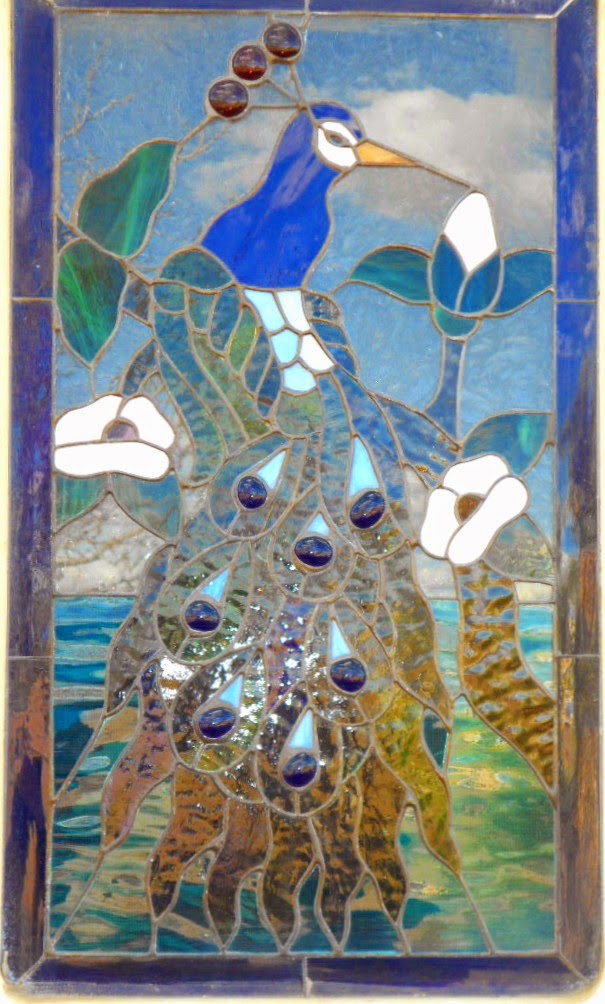 As I said in my last blog, poor Seann LOVES dogs, but is allergic to them.  He can only tolerate so much time with them before he starts with the itchy watery eyes, stuffed up, etc.  On top of it all, he is suffering from a terrible head cold.

He comes fully prepared to tease our muttenheimers with pockets stuffed with dog treats.....   at first they are a little stand-offish and both were hiding behind my passenger seat in their little Doggie Den.  Seann was bribing them out with treats that Finnegan could NOT resist!   Look at that ... the way to a dog's heart is through his tummy? 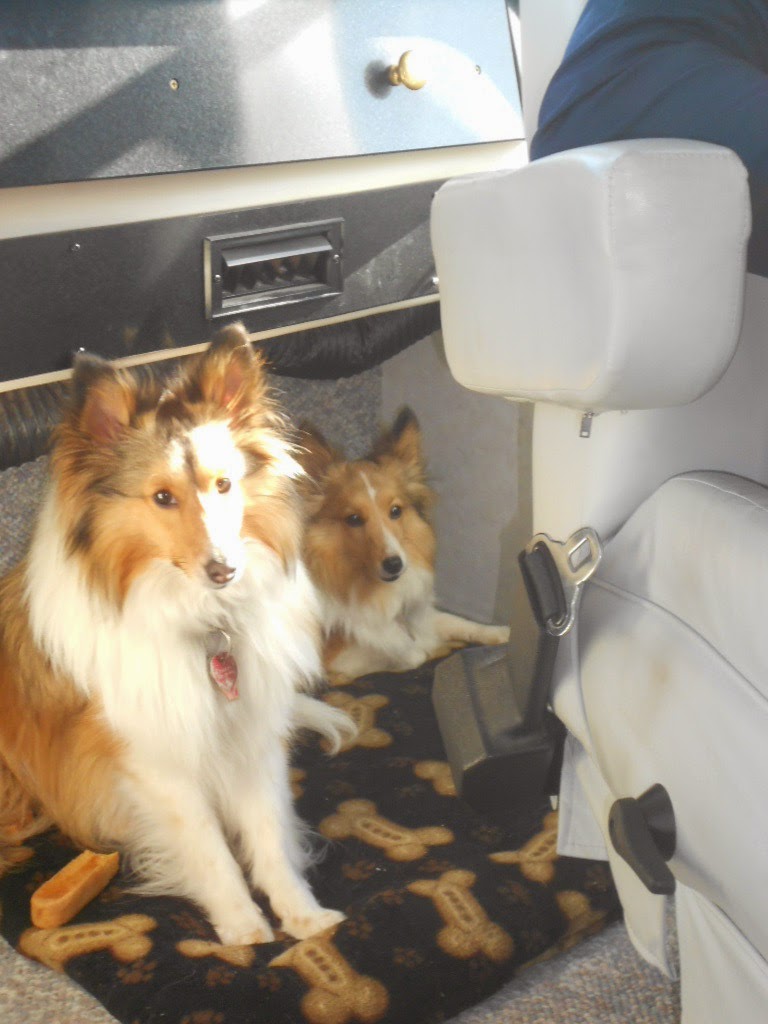 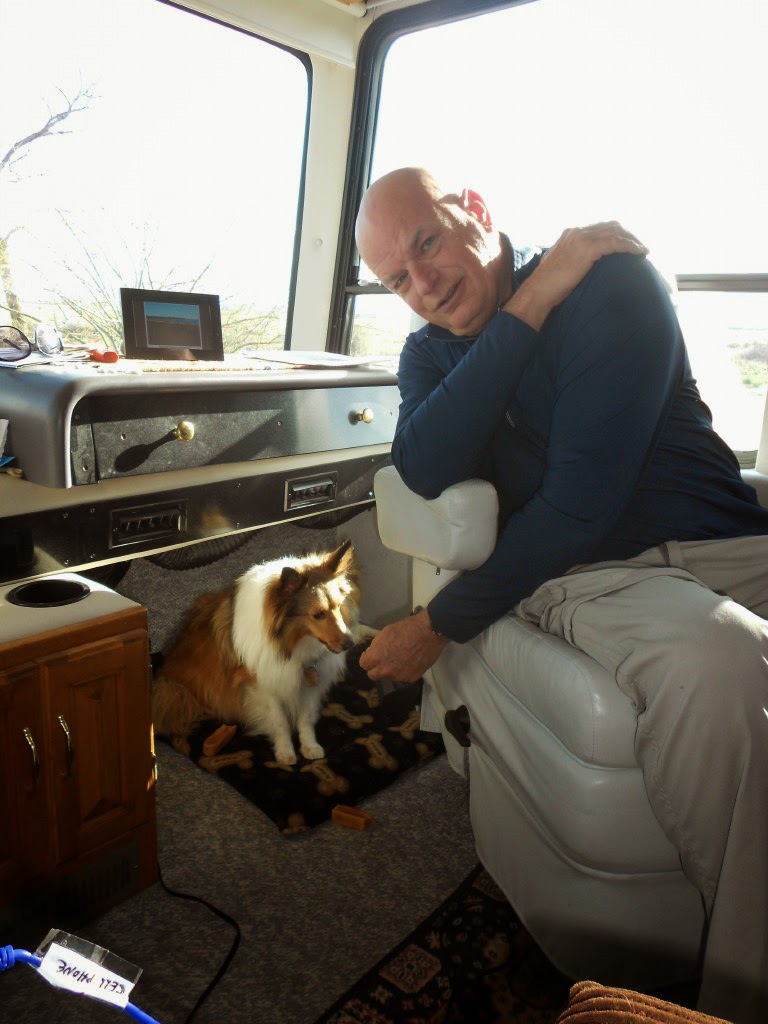 Soon Seann had Finney fetching balls and getting treats as a reward.  Little Binney in the background was jealously watching all the treats go into Finney's mouth.  But the stubborn little cuss wouldn't come out to get some herself.  She was drooling in the background!   Seann tossed a few over to her, and she ate them as soon as he would look away. If he looked at her, she would stop eating them. Awwww he made sure that she got her fair share. 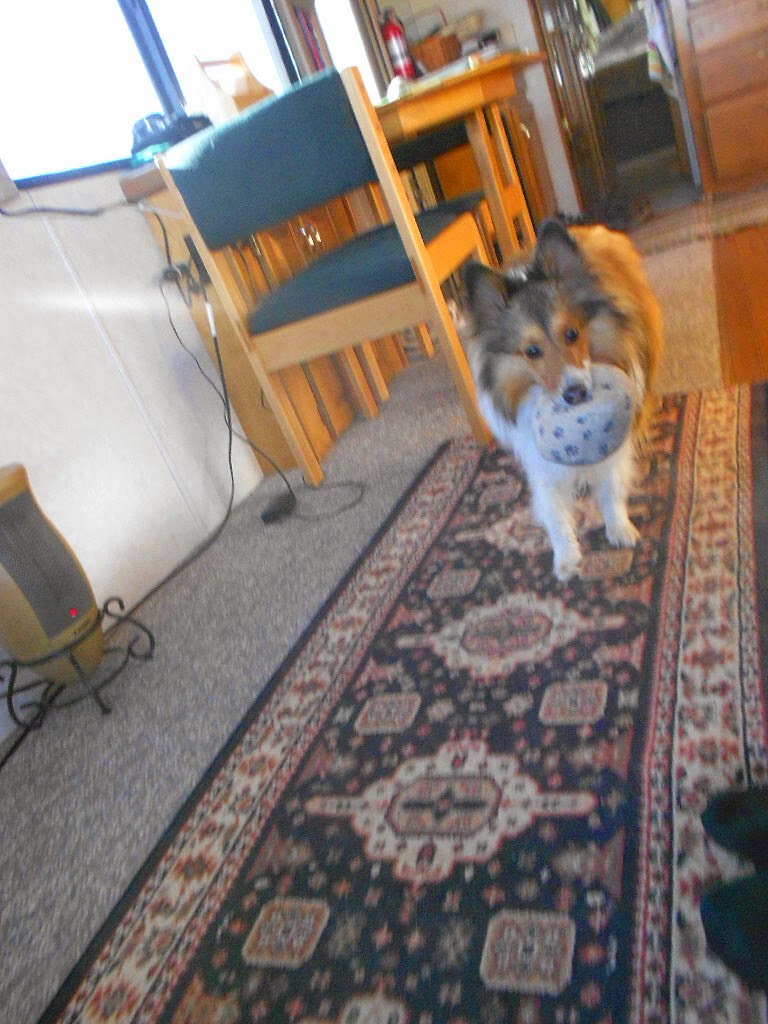 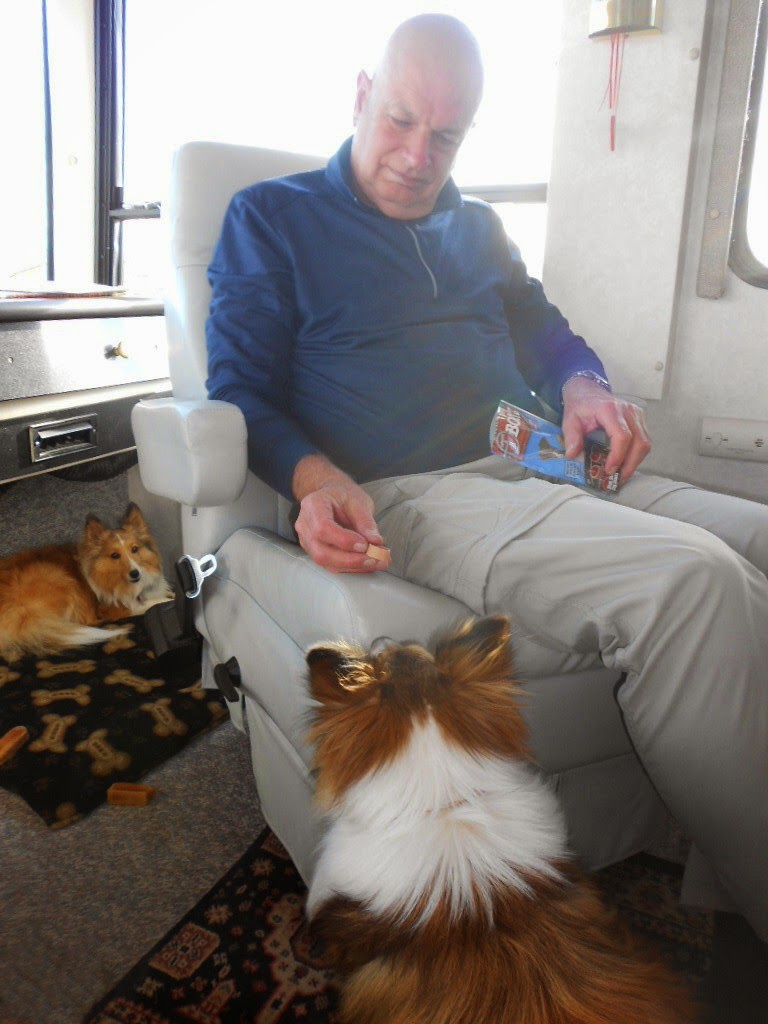 This afternoon I wanted to do another load or two of laundry.  I did two smaller loads instead of one large one.  We noticed during the two smaller loads that we had done, the machine was going into the spin cycle and make an AWFUL racket!  I would have to shut it off and let the timer click for the door open release mechanism, and rearrange the load.  Sometimes it would spin evenly, and other times go off balance again. Argghhhhh!   So after the second load, I got on the computer and googled Splendide +shaking vibration and read a few suggestions.


Many of the suggestions necessitated removal of the top of the washing machine.  That means unhooking the water lines, unclamping the vent hose, unplugging the power cord and pulling the entire machine OUT of the closet compartment! 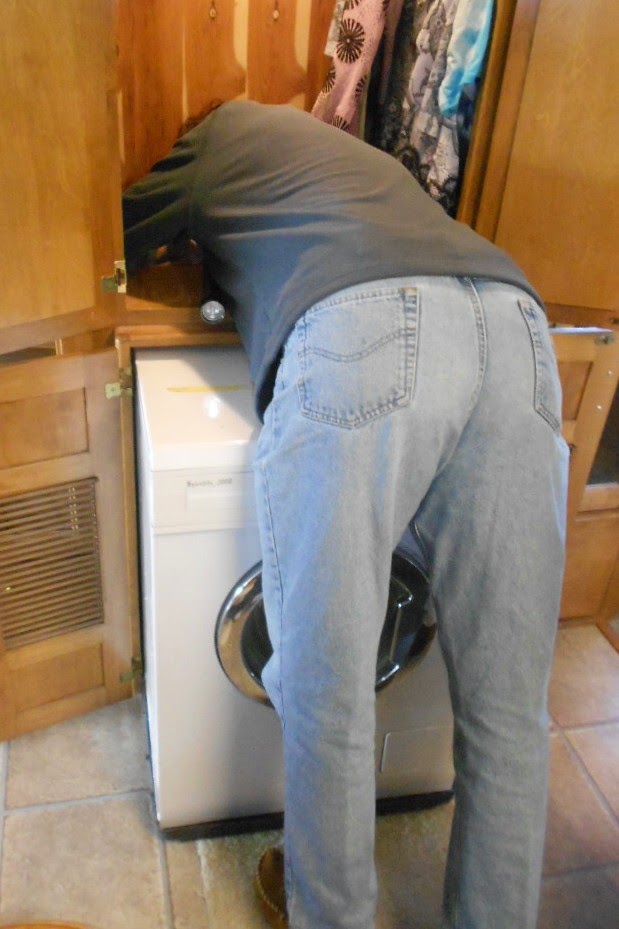 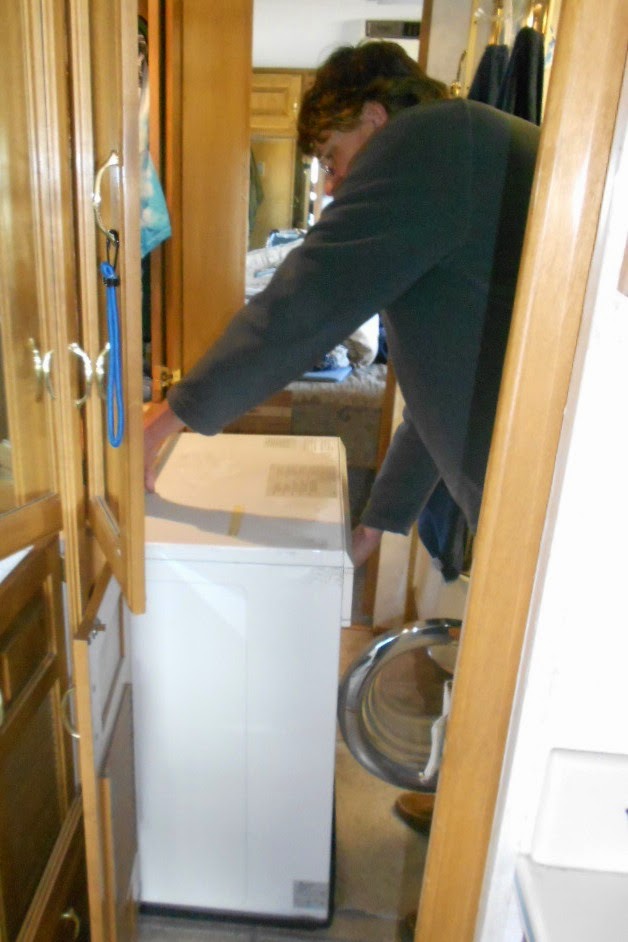 We did just that.  We took the lid off, and checked the bolts on the cement counterweight.  Nope, all good. there.  We checked all four springs.  Nope, all four intact and holding good and even pressure.

Now to get to the bottom two shocks we had to lay it on it's side.... and then remove the bottom plate.  Nope, shocks are fine.  We can not find any reason why it's shaking so much on spin. 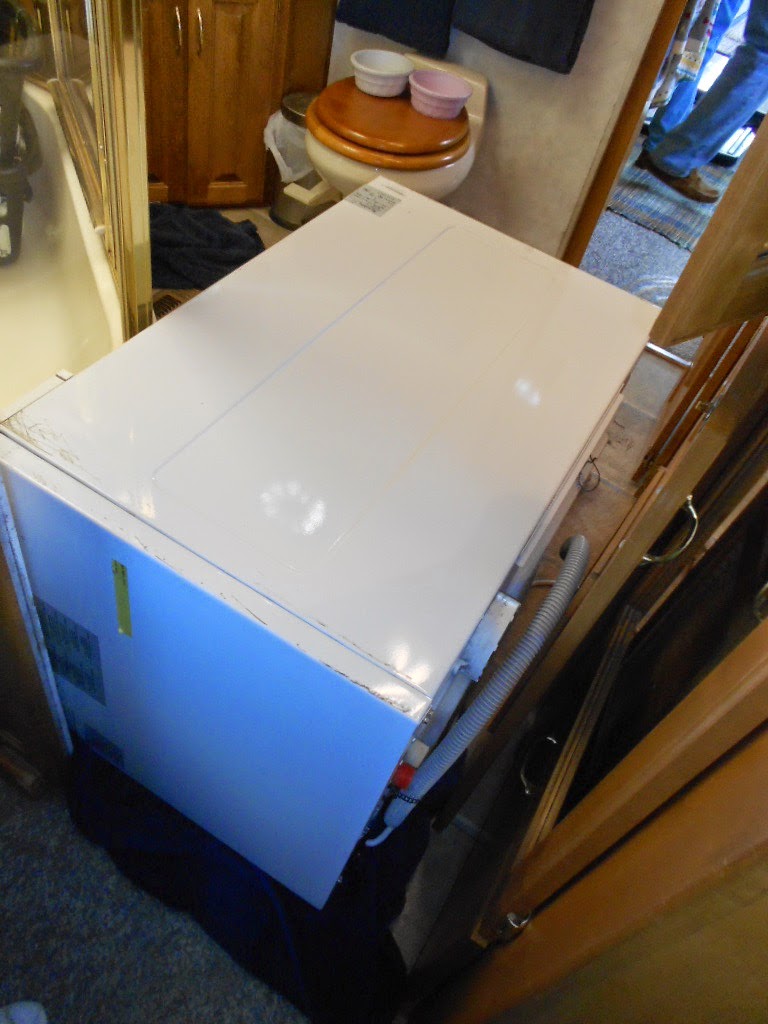 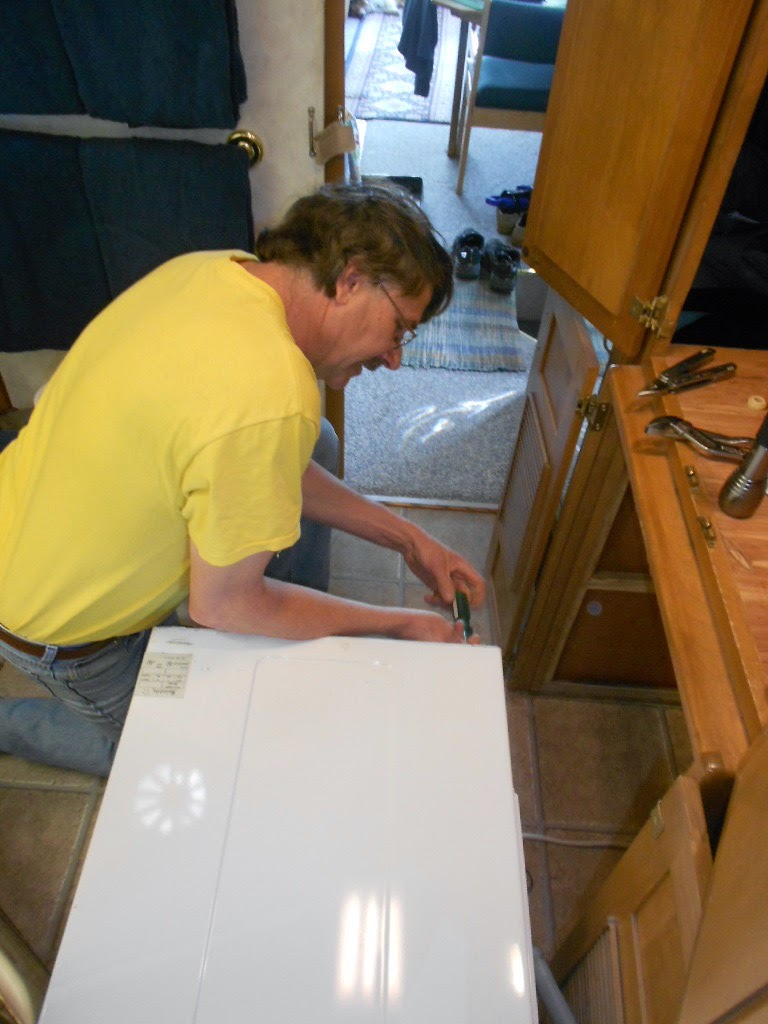 So we put it all back together again.

We even double checked the level of the coach.  Nothing seemed to make a difference.  We did one more load crammed full tight instead just a smaller load.  That seemed to help a bit, spinning around with a full load means less chance of going off balance? We did notice that if we push the machine firmly down from the top with our hands, it shakes much less.

A final suggestion we will try is to go to a bicycle shop and get two bike inner tubes!  We are to stick them down on each side of the machine between the machine and the cabinet it sets in.  Inflate them up with an air compressor or pump.  They act as air bags cushioning the machine's sides, and hold the machine more steady.  So that is on our next list of shopping items when we get to a bigger town.

We had a nice surprise to find out that a couple who follow my blog from Washington are here in the park!  Dawn came over to to visit this morning with coffee and later I got to meet husband Jim.  Tonight after dinner we lit up a campfire in Steve's Flame Genie pellet fire pit and sat around and shot the breeze with them and Seann for a while.

Tomorrow's plans are to join Dawn and Jim for an excursion to Mexico for some shopping, a hair cut, and then lunch.  Should be fun!  They are driving so we don't have to take the bus at 7:50 a.m.!

Posted by KarenInTheWoods at 10:20 PM