Hanging my Robert Duncan print in the motorhome

Many years ago, when Steveio and I were still dating, he bought me this gorgeous Robert Duncan print called "An April Storm" ...

I feel inside that I see myself in the girl in the print, tending the animals surrounding her in the storm.  Most of Robert Duncan's rural themed prints include his grandchildren and usually a shetland sheepdog.  I had mentioned to Steve, just once,  that I loved that print.  Amazingly--- it appeared the next Christmas as a very thoughtful present! It warms my heart each time I look at it.


When he bought me the print and also included having it professionally framed,
I was going to hang it on the wall, but the wall needed painting.


That one print ended up costing me a LOT of money!!!!


When we got married two years later, and we built our home up in the woods, the framed print hung in a place of honor, over the fireplace, where it's been for the last 14 years. 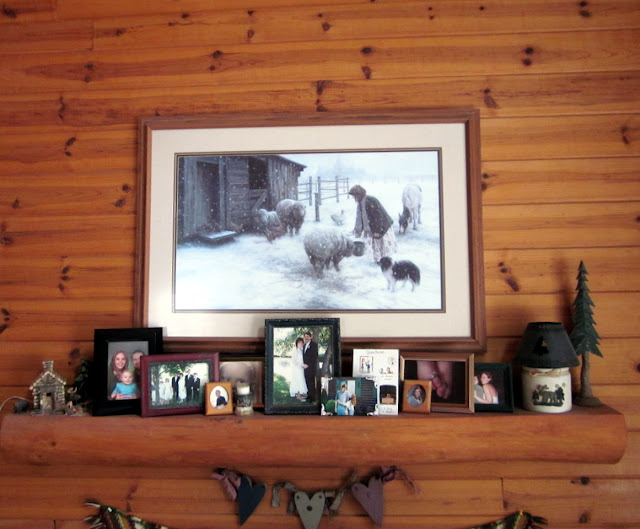 I had noticed this year that some of the photos and frames on the walls have left sections remaining of lighter pine areas, where the UV rays have darkened the open areas of the pine wood.

Sooooo upon removing this big print, oh my oh my~!  Look at the big light spot!   So we decided to take the print down and let that area darken over the next year or so.


(can you see the large lighter rectangle over the mantle?) 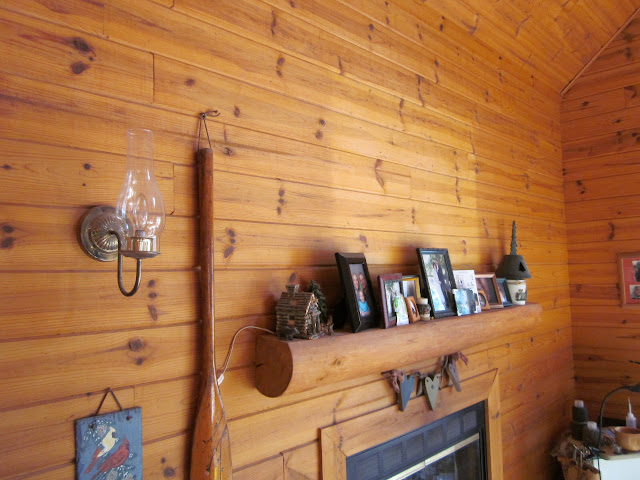 Of course, our plan is to sell the house by 2013 when Steveio can retire and we will be going fulltime in the motorhome.  Naturally, the print HAS to come along!   Our motorhome has soooo many windows (which we love all that light) but very little actual wall space to ever hang a print on!  Much less, a print this big!!
We measured up the area over the king sized bed's headboard which is one huge mirror that encompasses the entire back wall of our motorhome.  Ah ha!   Let's mount the framed print over the bed ON the mirror!   But the frame was too tall for the space ---  Steveio brought it to a friend who used to own a framing shop, and have the frame cut down.  It meant removing the matted border, but that was okay, the print was centered nicely in the re-modeled frame.   We just got it back and decided to hang it tonight.
The heat here was just oppressive and humid and awful in the house, so we fired up the AC in the rig and went out there to relax and work on our project.  It was cooler than in the house, by far. We might even sleep in there tonight instead of the hot house.
Here is a shot with the large expanse of mirror along the back of the motorhome. 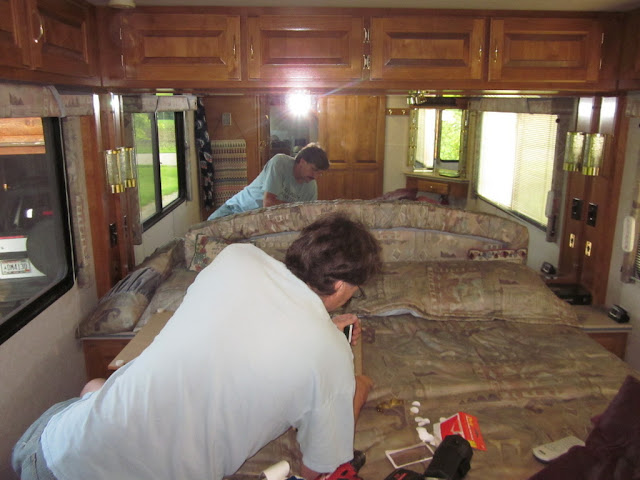 Steveio was screwing in the brackets and I was adding the felt pads to help cushion it against the mirror.  Because of the thin trim strip along the mirror at the top, the frame would not be flush to the mirror, but held off with 8 thick felt pads.
We carefully measured so the brackets were evenly spaced out, and I set the pads to cushion the frame at spaced out intervals. 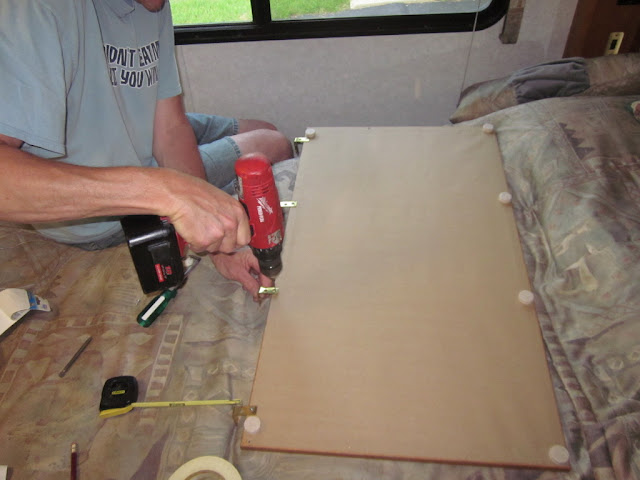 
(Safari's use solid Western Alder hardwood throughout their motorcoaches,
not printed paper or fiberboard cabinetry like in our old Coachmen or Sierra) 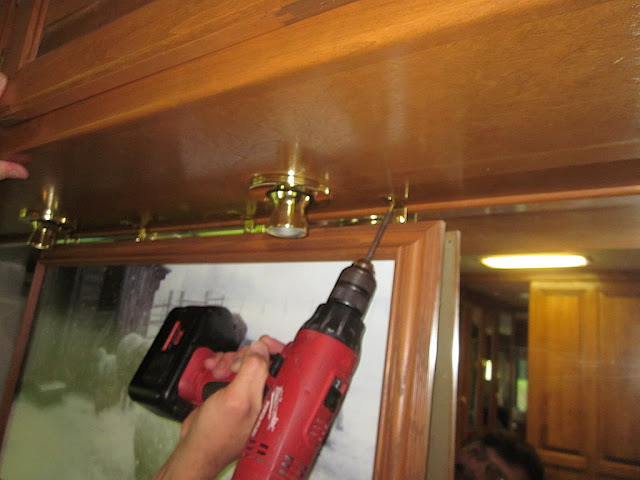 Once the brackets were all secured, the four bottom felt pads had circles of double-sided sticky tape added to each one to keep the frame from vibrating or wiggling, now tight to the mirror.  The weight of the frame is on the brackets, not the mirror.

I think it looks WONDERFUL! 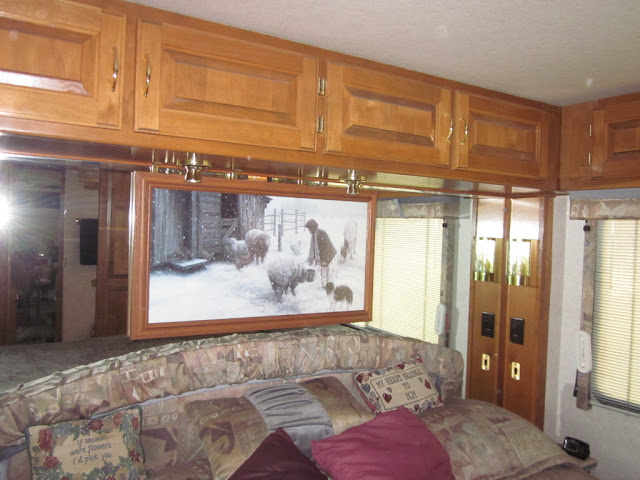 Just one more step to making the motorhome into our full-time home!
.
Posted by KarenInTheWoods at 8:59 PM