Riding the Oconto River Cruise Lines aboard the S.S. Pa-Fundtner

We decided to celebrate the Fourth of July (and taking a day off staining the house) by taking a cruise up and down the Oconto River.   Normally it is only navigable by canoe or kayak, but with the recent rains, the levels were high enough to accommodate our cruise ship, the S.S. Pa-Fundtner, a sleek smooth elegant aluminum rowboat complete with a motor!

Side note:  I "knit" Steve this boat, as when he was looking to buy it 2 years ago, I had just completed a large knitting order for a shop, and the check came the same day he found the boat.  Almost dollar for dollar coming in and going out. How convenient, huh?  Sooooo I say that I "knit" him this boat!

The boat landing is a mere three houses away up the river from our house, so instead of dragging the boat down through the woods and hopping in the river behind our house, Steveio opted to hook it up to the Tracker and tow it over to the boat landing. 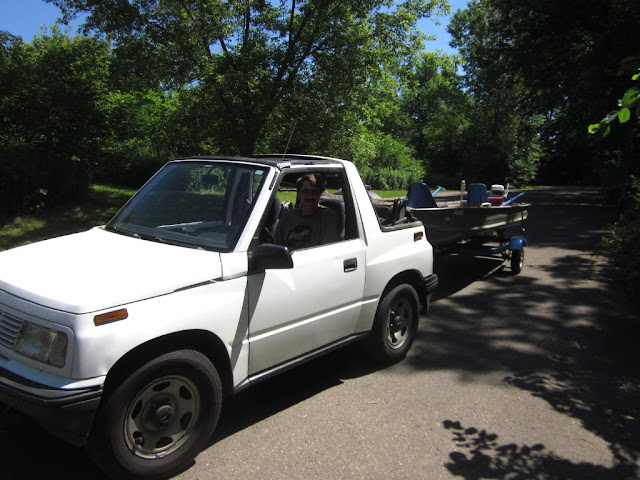 With Captain Steveio at the helm, and myself as the First Mate, we launched the S.S. Pa-Fundtner cruise ship into the Mighty Oconto River!

This is one happy Captain Steveio...  (I smeared him with sunscreen so he won't get burned)  We set our sights on heading upriver, mainly, because in case the engine died, we could at least float back down again.  LOL 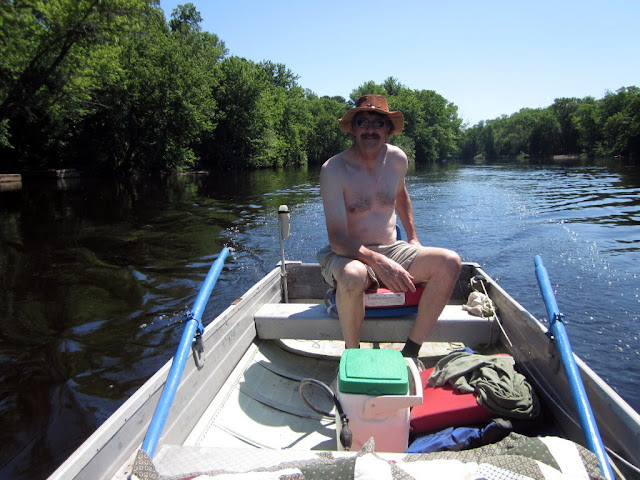 I opted to forgo the fancy lounge seating up in the front of the ship, and instead chose the cabin accommodations   Furnished with a comfy sleeping bag, pillows, knitting bag and cooler of drinks, we were all set for an afternoon cruise up the Oconto.   The views were GORGEOUS! 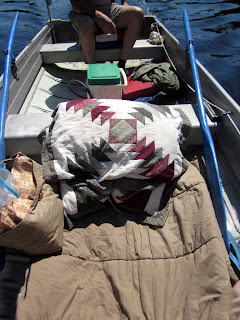 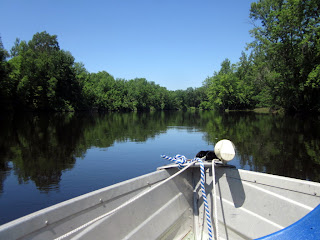 It don't get much better than this! 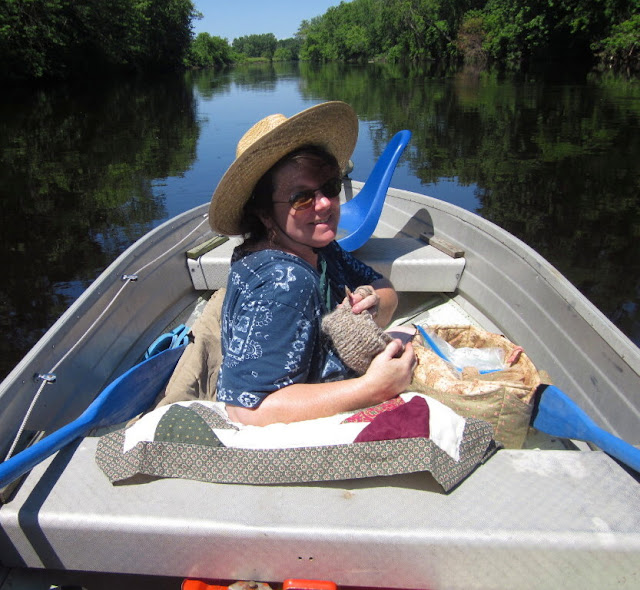 The Oconto river is dotted with small islands, and often we have to choose which way to go around them and where we think might be the deepest.  We did hit a few rocks and logs here and there, and dragged on some rapids right before the bridge.  But with the high water levels, we were making our way upriver a LOT further than we thought we would. 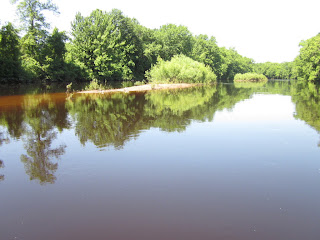 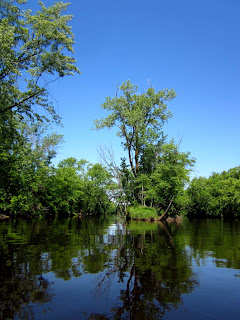 For entertainment, I was happily knitting up a thick heavy wool hat as we cruised along.  I can do that without looking, so the scenery was not lost on my eyes.  I could toss down the knitting and grab the camera when needed.
Imagine this upcoming winter, wearing this hat, when this very river is frozen over with ice and snow.  The river becomes a major raceway for snowmobiles and fourwheeler ATVs to run up and down all winter long.   I am going to call this hat my Oconto River Hat when I list it for sale in my Etsy store.  LOL 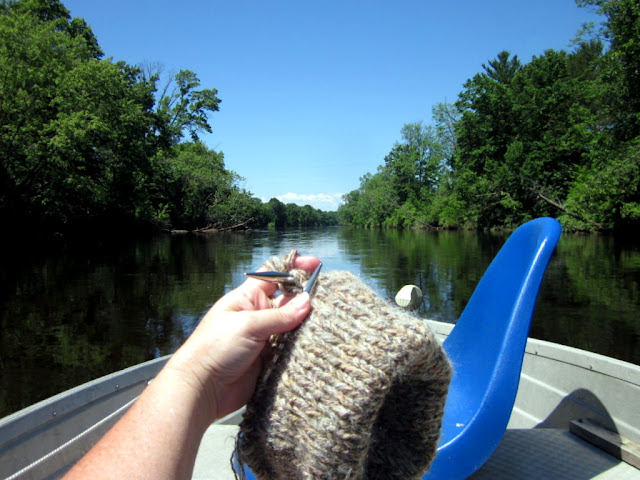 We saw a few fishermen along the river.  For those of you not familiar with river fishing techniques, they don a rubber pants and boot combination called "waders" and walk up and down the river, fishing the shady spots under the overhanging trees where the fish like to hang out.  This guy got a small mouth bass, but they mostly try for the elusive brown trout.  Our river has a variety of fish, from Steelhead to Trout to Bass and even Suckers (carp).
This little damsel fly landed for a while to rest as we cruised on the river. 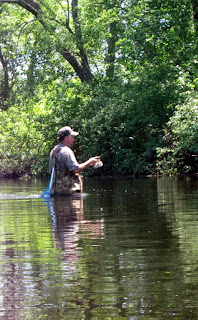 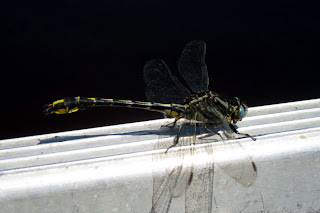 After we went almost up as far as the Machickanee Dam,  which is about five miles upriver.  We turned around and headed back down the river towards home.   Behind us came a flotilla of partiers celebrating the Fourth of July in style!  They had tubes, kayaks, canoes, air mattresses and any assorted thing that would float! 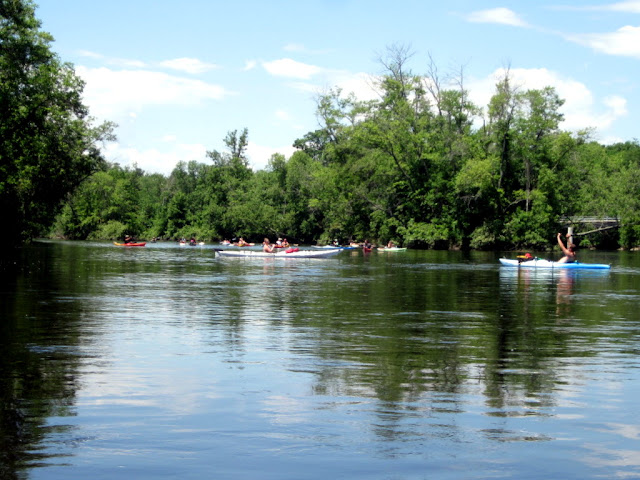 These folks in the rubber raft had a little tug boat following behind
which was their beer cooler!
How cute is that? 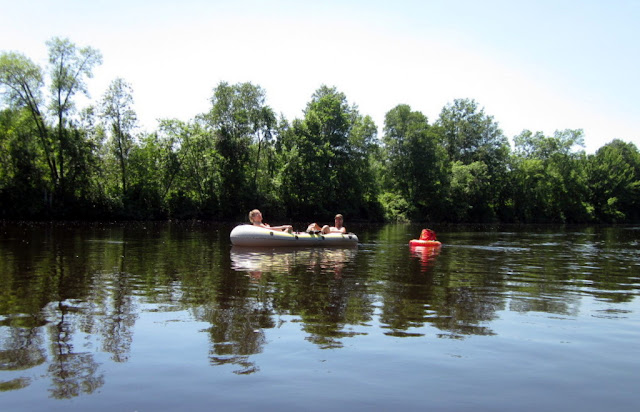 Here is the view of our house from out in the middle of the river.  Can't see much of it, but it is built up much higher than the normal river levels... so when we do have spring flooding, our house is up high and pretty safe.  Steve needs to get some of those weeds cut down on the bank, so we can reach the shore of the river when RVing buddies Jim and Dee get here next week.  Dee won't go in the boat, but she might want to walk to the edge of the river and see the shoreline.

Before we pulled the boat out of the river, my hat was completed!  It will soon be listed for sale as my Oconto River Hat--- created while cruising on the Oconto River in the Northwoods of Wisconsin! 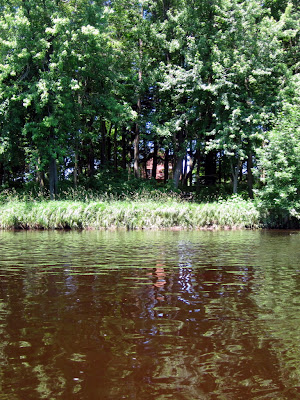 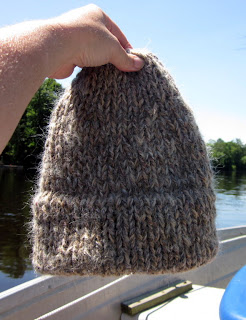 After we got home, Erin and Mark wanted to go out for a belated birthday dinner, because she was feeling sick on her birthday June 30.  We took the Bee-Bopper Chelsea Bug at our house so they could have a peaceful night out at Red Lobster.

Granfaddah set up the swimmy pool on the deck with warm water and we dressed up the little princess in her pink bikini!

She played and played with water and the cup-os for a couple hours, and she even watered all my tomtoes one by one with her tiny cup!  Scooping it outta the pool and tending each plant.  A Green Thumb in the making, as her daddy has a big garden in his yard too. 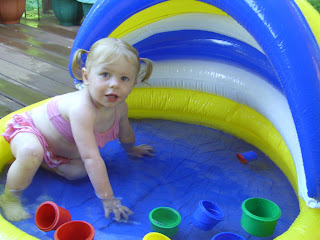 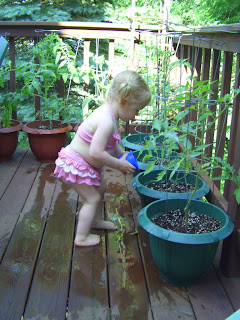 She ate her dinner El Fresco, and it was easy to wash her dribbles and spills with water from the pool.  She gobbled down lots of fruit, some tuna salad and slices of cheese.  What a diet for a bathing beauty!
Here she is wiping her wet swimming suit butt back and forth on the patio doors, making a squeaking sound-- it was hilarious and the more we laughed, the more she did it! 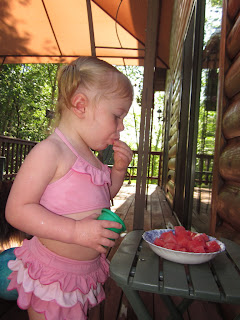 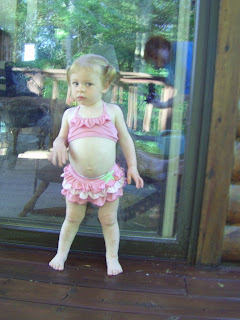 When they came to pick her up, she was busy coloring them pictures for their refrigerator.  I always try to draw with the grandkids all the various letters of their name, the alphabet and numbers too.  They learn so fast, and the more you draw it in front of them with their hand on the crayon, the more it finds a roosting spot in their little brains.  Jameson is almost reading already and he is not even 3 years old!
It's so much fun taking care of the grandkids, and spending time with each of them.  Last week I had a couple lunch dates with Jameson, and soon we will be getting Allegra for FIVE DAYS! 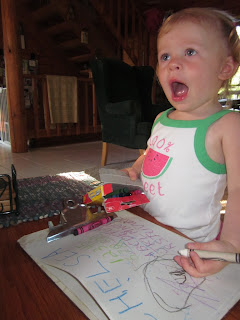 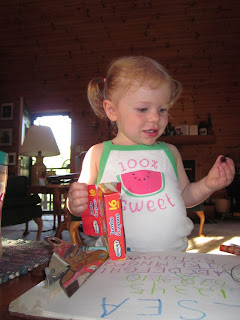 Boy oh boy, we hit the rack and slept soundly after such a busy busy day....
.
Posted by KarenInTheWoods at 10:47 AM