Git Er Dun - Restaining the logs on our home

Okay... on my last blog I showed where I started re-staining the east wall and some of the south wall during the week.  Just as high as I could go without the tall ladder here on the south side of the house.

I was waiting for Steveio to be home on the weekend so I could go up the ladder to work on the rest.  Best to have someone at home when going up on a ladder to call the ambulance.  Right?

I enjoy staining, Steveio does not.  All I asked him to do was stain the very tippy top above the second story windows once I got up that far.....  So these first pics below are what I got done during the week: 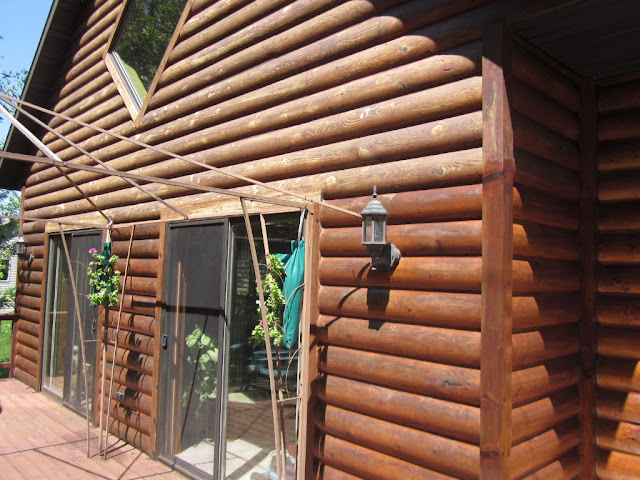 I had already gotten a lot of the west and east walls done too.... 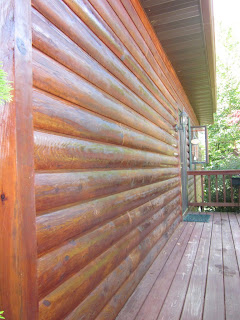 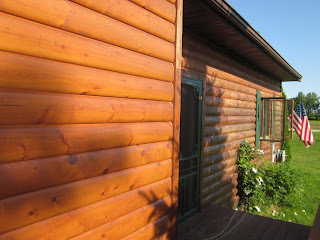 Now it's Saturday morning and Mr. Steveio Slavedriver decided at 7a.m. that we should attack the south wall and "git er dun"   and he would go up the ladder and do a bunch of the area I was going to do!   He said let's get to it before it got too hot.... 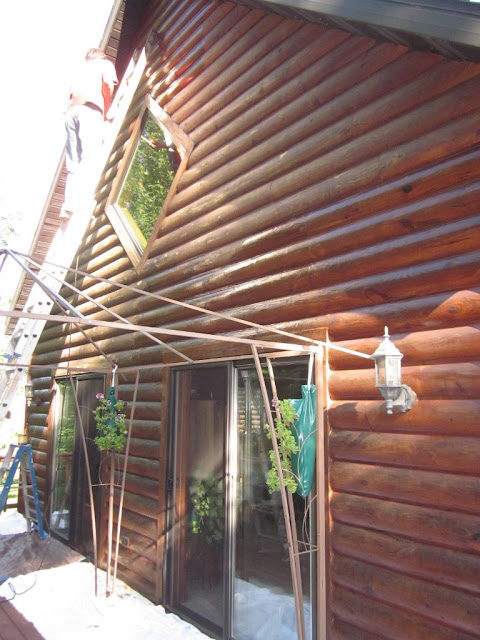 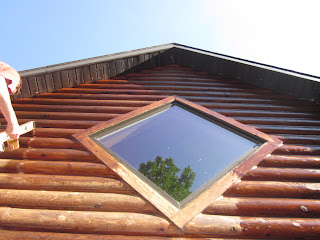 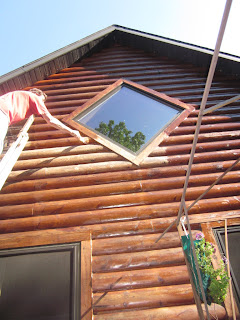 8 a.m.
Whew... we were done with the south side, and he said we were done for the day......   so we came in and I changed outta my staining clothes and got comfy in my regular clothes... and uploaded the pic to facebook.
He sips his coffee and says:  "Hey, lets 'git er dun' on the north wall before it gets too hot"   Back into my staining clothes and around to the front of the house we go:
9 a.m. 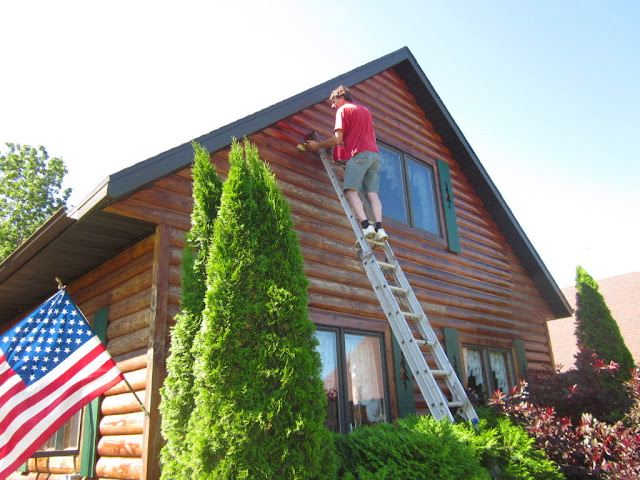 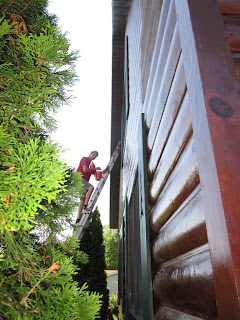 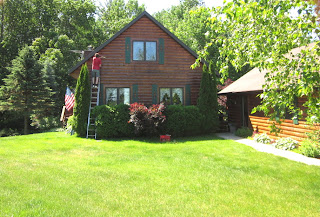 10 a.m.
I said enough was enough... snapped a few pics,  and I trimmed back the burgundy colored bush in front and tossed the branches down in the woods while he finished up.
While he is sitting here in the house and thinking out loud:  "Maybe we can 'git er dun' on the rest of the east wall this afternoon when it's in the shade?"   I put my foot down and said NO!   Enough for the day!  The heat was in the 90's and the humidity was still up.  It was time for a cool shower and a nap!
What does that nut do?  He fires up the riding lawnmower and takes off down in our woods to cut the weeds that have gotten too high.  Round and round all the trees, weaving his way up and down, back and forth. 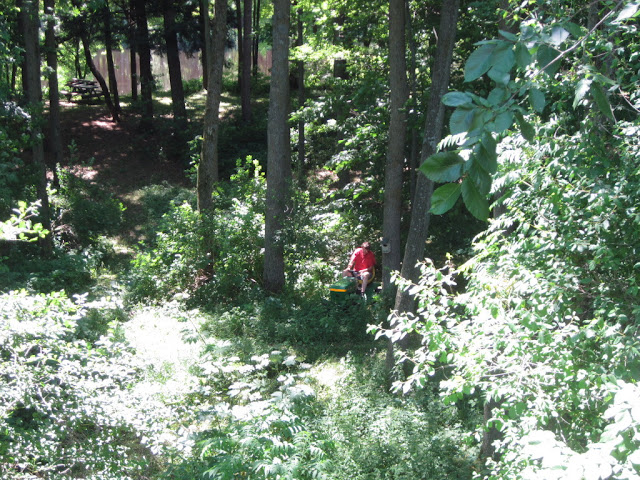 Then he fired up the chainsaw and took out some of the gangley weed trees
that seemed to have sprouted outta nowhere. I brought him refreshments! 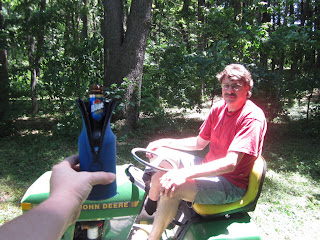 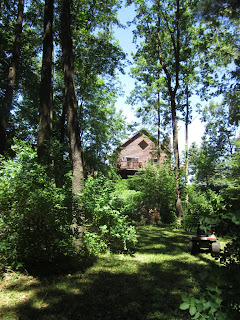 Later I got him to go for a ride in the Tracker, with the top down.
Cranked the tunes on the stereo, we had Fleetwood Mac playing as we cruised along. 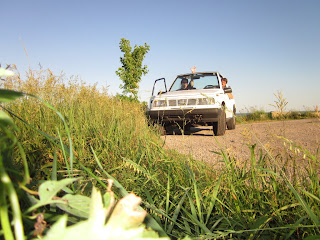 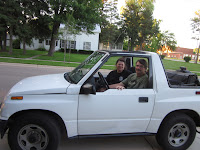 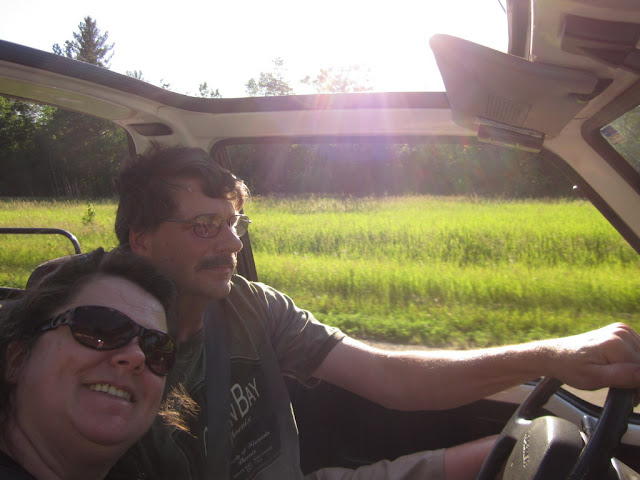 We went for an ice cream cone,
then drove out to The Breakwater city park and marina... 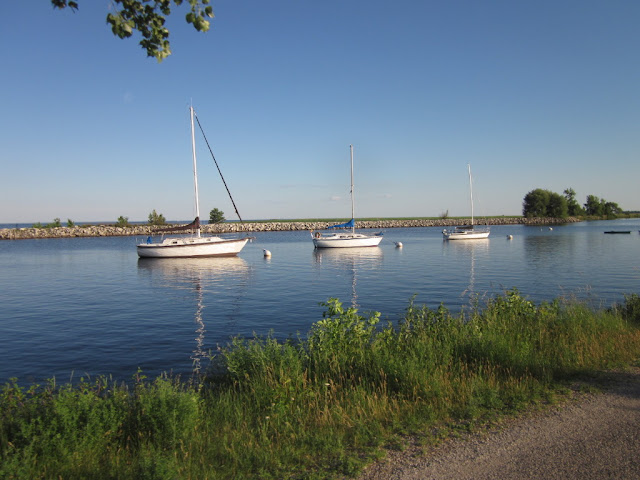 then on to North Bayshore County Park to see all the people camping.
Whaaaa I wanna be camping too!   The place looked pretty quiet, but all the sites were filled.
Then we drove past daughter Erin and Mark's to get a drive-by hugging with the little Chelsea bug!
She was very busy playing on her slide with her daddy. 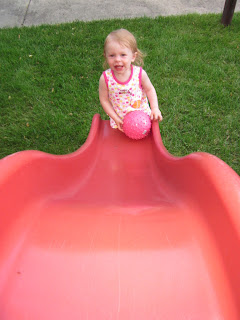 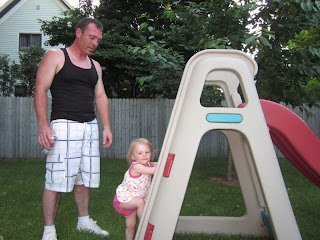 This is the cool outdoor firepit we got Erin for her birthday...
they are going to put it to use tonight.
Steve also brought her a load of firewood to break it in! 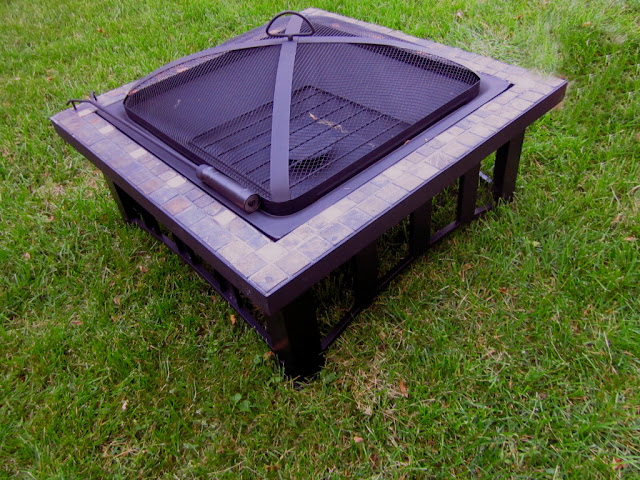 And back home we went...
Gosh, the house looked nice when we pulled in,
at least the front did.
Bet ya dollars to do-nuts in the morning we will be out there
finishing up the rest of the east and west sides!
Posted by KarenInTheWoods at 10:20 PM