(this is a post about Monday, just catching up now)
As many of you blog readers know, I own this funky futzy putzy frustrating machine called a Circular Sock Knitting Machine.   (a.k.a. a "CSM")  which are used to crank out socks, literally! 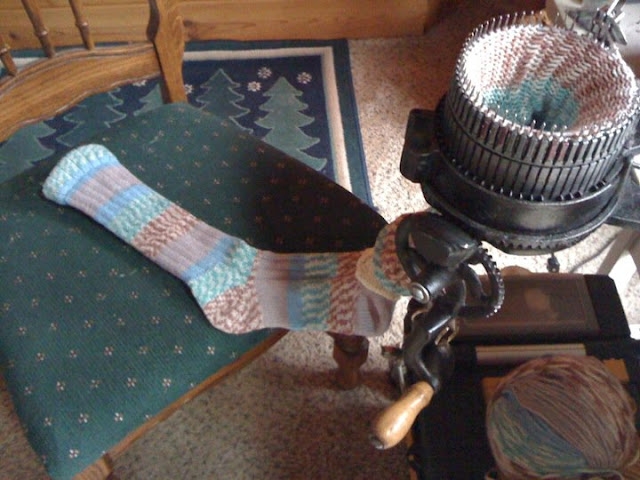 Twice a year, there is a gathering of other CSM owners from around the state of Wisconsin, sometimes even bringing in folks from other states too.   It is held nearby my home, over in Oconto Falls, WI at the public library.   (to get on their list of upcoming notifications-- email Ann Jansky at chuckann@ezwebtech.com )

Here we are posing for a group pic 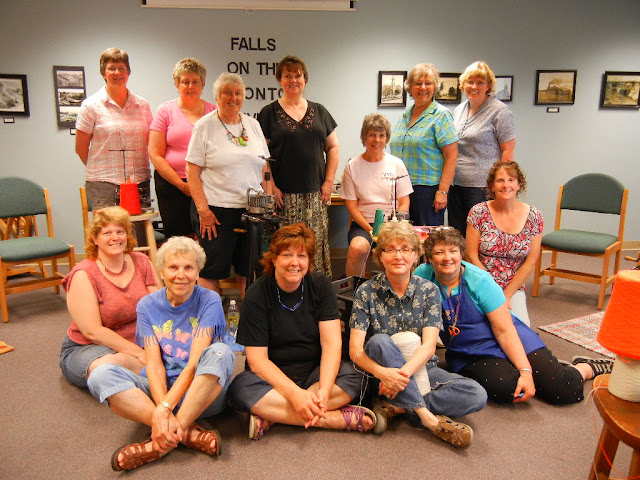 We gather together to share and show hints, techniques, new yarns and solve problems on these cantankerous machines.  They are a lot of fun, but also frustrating to get them to run right.  It's a task that is done with patience, skill and creativity.  Sometimes ya just wanna grab a sledgehammer....... 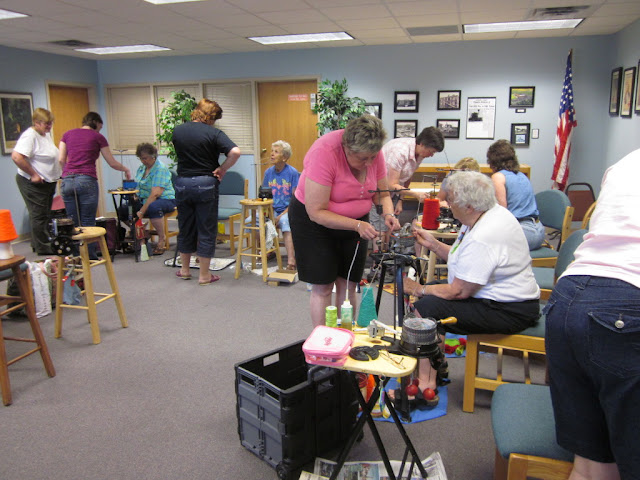 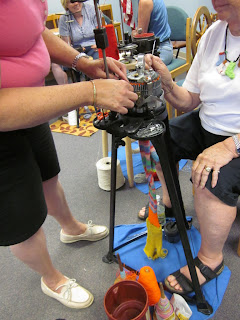 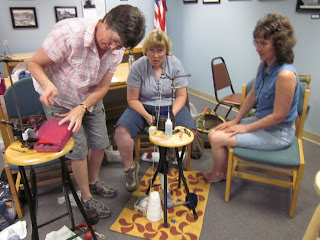 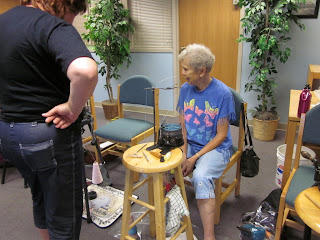 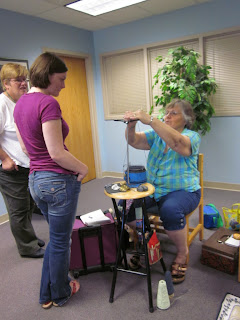 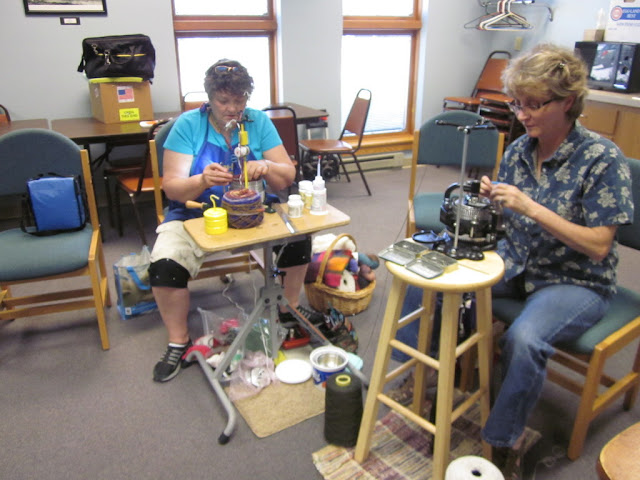 I helped a gal get her machine going, doing a few tweaks and fixes, and soon she was cranking away without any dropped stitches or big flubs.  That was a SUCCESS!
To the group, I showed how to close a toe using a special technique, and also how to join two pieces of yarn to make a nice changeover in colors.    I learned some special dyeing techniques and how to make a tiny sock!  It was a great day of sharing and learning.
I have owned various CSM's since 1997... some made as early as 1896 and and 1904, some from 1908, 1914, and now one from 1925.  The ones I like best were made by the Gearhart Knitting Company, of Clearfield Pennsylvania.

Here is a short writeup I have used (with permission) on my informational brochure that I hand out at demonstrations:

Gearhart Knitting Machine Co., Clearfield, PA.
Circular sock knitting machines were developed in the mid 1800s in order to decrease the time needed to knit a pair of socks. The very first machines were quite small and had cylinders that were made of wood. The wood proved to deteriorate too quickly however and later machines were made of all metal. In 1888, after spending many years perfecting the sock knitting machine, a man named Joseph Gearhart started a company to produce them. It was the first such company in the United States and was located in Clearfield, Pennsylvania.
For many years these strange looking, hand-cranked devices, were sold by door-to-door salesmen. The idea of using a machine to make socks was not very well received by traditional hand-knitters, and interest in the machines did not catch on very quickly.
During World War I there was such a shortage of socks overseas that the American Red Cross gave away the machines to people who would agree to knit a quota of socks for the infantry.
The effort was a success and because so many socks were produced in such a short time, the sock knitting machine gained a good reputation across North America and Europe.
After the war was over circular sock knitting machines became very popular. Several different companies in the U.S. and Canada produced them. During this time they were frequently marketed as a way for housewives to earn extra money while staying at home.
Production of the machines ceased in the 1930s although they were made again briefly in the late 1970s and early 1980s. Today, these machines are often found in attics, antique stores, etc.
On a machine that is working well, a pair of socks can be knit in about an hour. Mittens, scarves, and other items can be knit on them as well.
Published courtesy of John Loeffelholz

Sooooo what is very interesting to the sock-knitting machine community is that the original patents held by the Gearhart family are now being made back into production again!  The new company making them is called Erlbacher Gearhart Knitting Machine Company   The brand new machines are just about ready to be shipped out to a waiting list of new owners!

We were luck enough to have a gal named Georgia come to our gathering and show us the NEW Erlbacher Gearhart machine!  It sure is a BEAUTY! 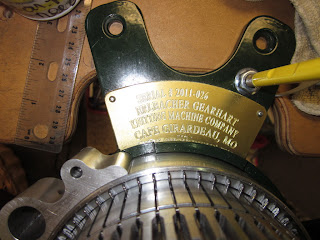 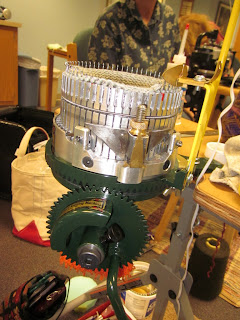 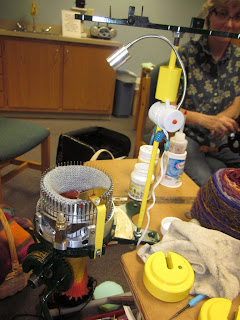 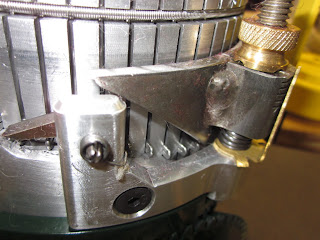 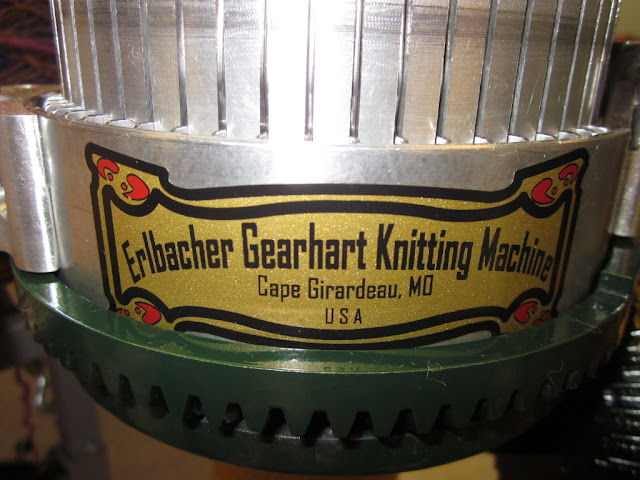 Remember in my blog from the past weekend where I said I spun up some woolen yarn.... Lake Michigan colors of various blues and soft aquas?   Well... here is what I made from that yarn! 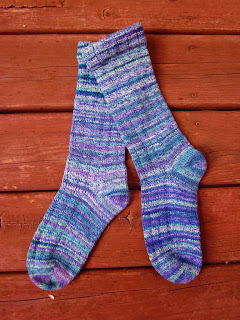 .
Posted by KarenInTheWoods at 8:05 AM