spe·lunk·er  (sp-lngkr, splng-)
n. One who explores caves chiefly as a hobby; a caver.
[From obsolete spelunk, cave, from Middle English, from Old French spelunque, from Latin splunca, from Greek splunx.]
spelunking n.

(This post is about yesterdays adventures... being posted the day after)
We got up to a lovely day of NO winds, blue sky and temps going up to the high 70's.  Perfect day to be out and about.  Sooo what did we do?  We went down in a hole in the ground!   Go figger!

South of our campground at Brantley Lakes State Park, about 40 miles is the Carlsbad Caverns nat. park. So we left the doggers in the rig with the AC set, the blinds down, the tv on to make distracting noise for them and lots of water in their dish.  Other times we have left them, we know they sleep all day.  Twice we have set up a video camera just to see.  Nothing can be more irritating to fellow campers in the neighboring sites than to have a barking dog trapped in a rig all day long.

We loaded up our Tracker with cameras, water bottles and the small GPS on my cell phone.  I didn't want to take the laptop along as I knew it would be sitting in the Tracker in the parking lot at the caverns.  The Tracker has a soft top like a convertible and would be much to easy to unzip or slice open to get at any perceived valuables.  So the little handheld would have to do on the Iphone. 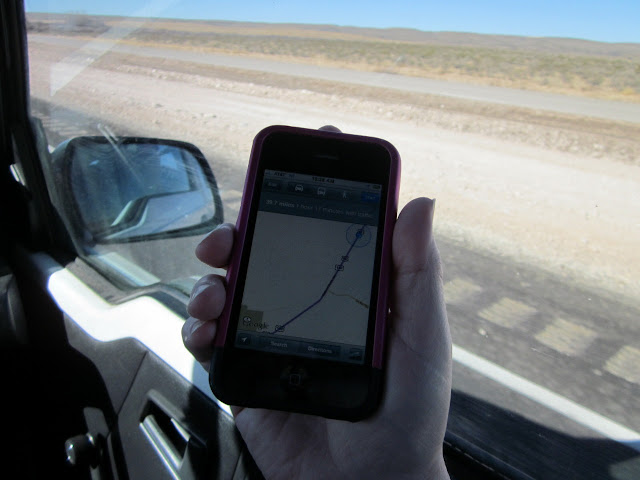 We arrived about 9am, and bought our tickets above ground...  It's only $6 per person for a self guided tour, and parking was FREE!   Imagine that!   We listened to some general rules, hit the potty stop, and headed over to the opening of the caverns. 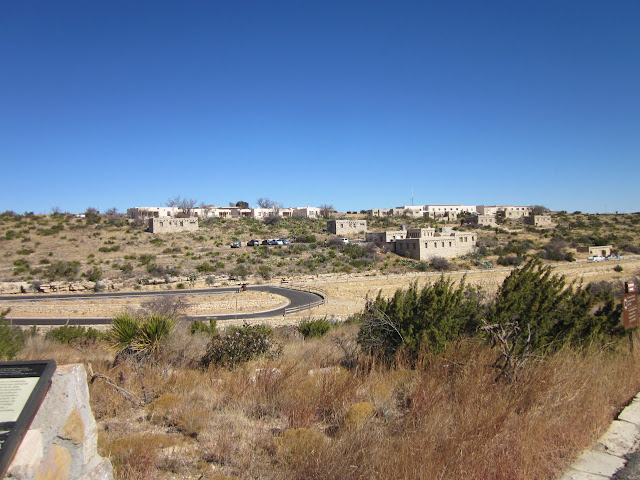 These buildings were all assembled many years ago by the CCC workers
We approached the ampitheater where in the evenings they have "bat shows" as all the bats exit the cave.  This time of year the bats are not there, so we didn't see any (thank goodness) 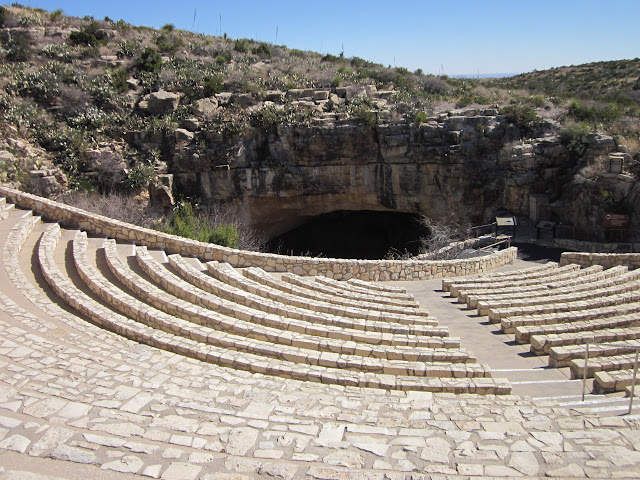 Now it was time to start descending into the hole... .back and forth, back and forth, we made our way down the step grades.  No steps, just walking ramped areas under the ground.  The full depth is equal to EIGHTY STORIES down!   The total walking was about 2 miles to reach the Big Room! 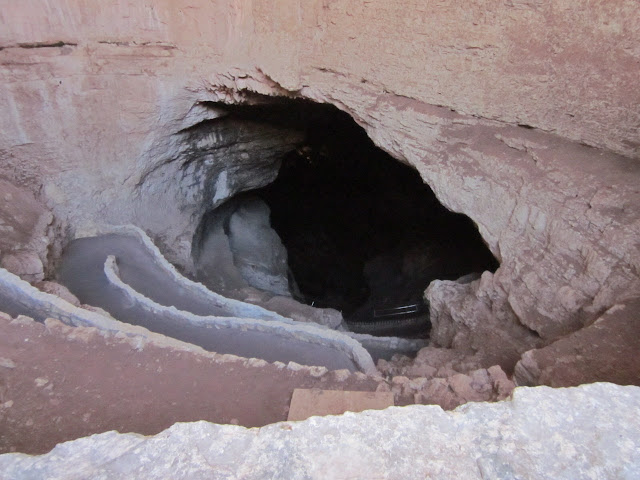 One last look at the sky before we made our descent! 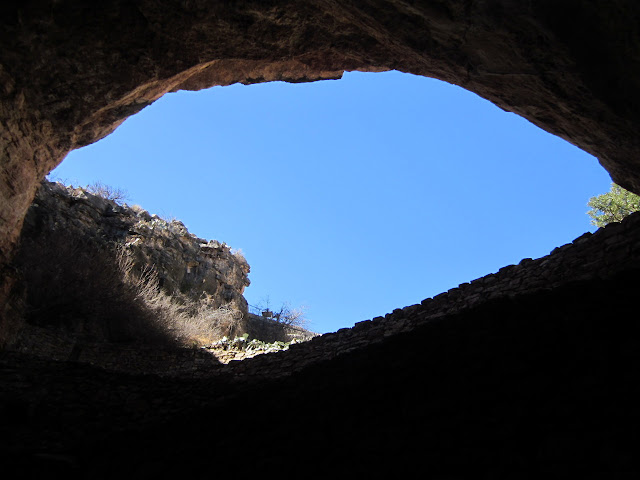 I won't bore you with tons of underground photos.  No camera can capture the depth, feeling and immense sights we saw in the caves.  The paths were faintly lighted and safety rails were up to help you find your way.  We brought along flashlights to peer into unlit areas.  It was amazing and unimaginable unless you have been there.  The total quiet, the drip drip of moisture underground, the formation of the caverns was mind boggling.  I shot video as well as some still shots.... and we set the camera on a rock on self-timer for this touristy pose..... 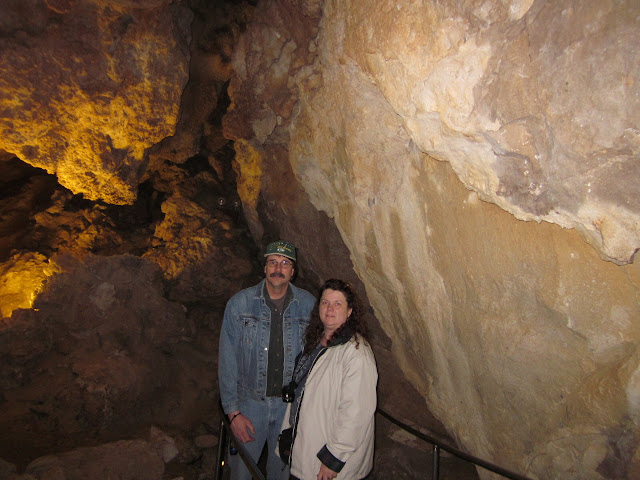 It was damp, and cool, about 60 degrees.  I got hotter and hotter as I think I am still sporting a fever.  Danged head cold.  I brought along an inhaler for my lungs, as the dampness was a struggle.  We took rest breaks and bided our time on the descent.
At one point, I realized if I didn't help out a little bit, the entire cavern would close in and nobody else would know where we were!   So I did my part..... 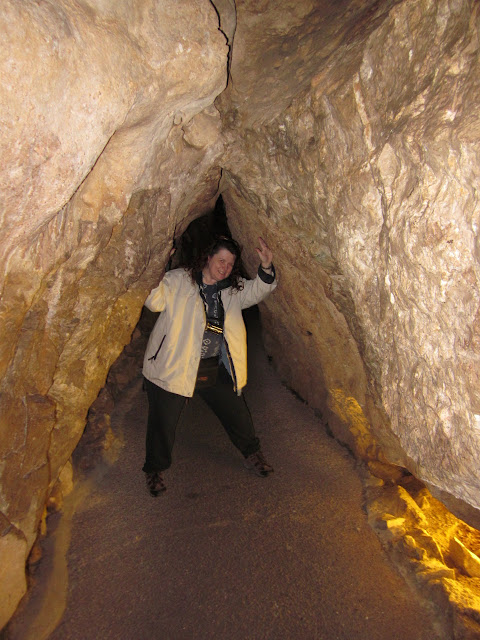 We reached the bottom.. finally... and walked around the Big Room... the gratefully ascended up to where the elevator was ... yes.. there is an elevator to get you back up the 800 to the surface! Whew!
We did our touristy thing of buying some post cards for the grandkiddos (whom we miss TERRIBLY)
and then proceeded to take a one lane, one way, scenic gravel route around the nat. park.  It was 10 miles long of rugged terrain, and Steveio was in his glory!  We bounced over rocks, drove through dry washes and gullies, and explored the area...... 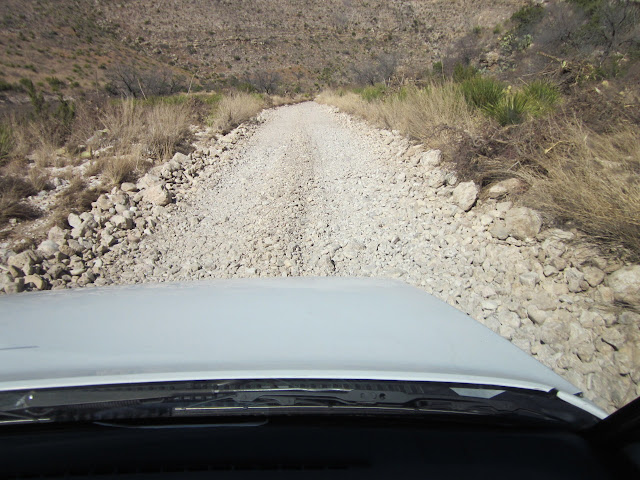 He was enjoying the trails and his little Tracker toy... it wasn't bad enough to put it in four wheel drive, but it was a fun bouncy jouncy ride never the less! 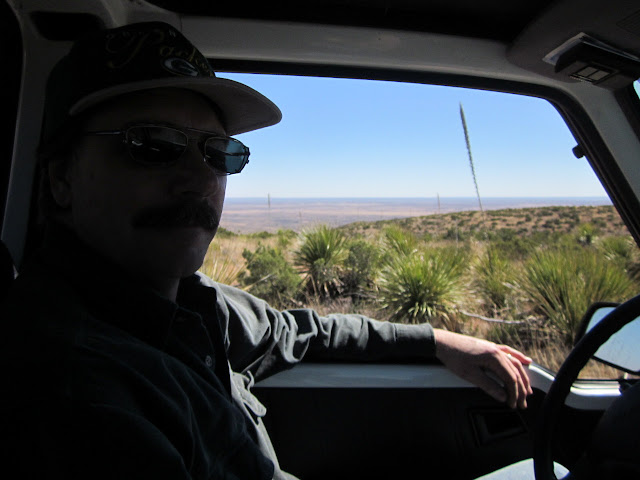 And Yes, Little Grandchildren, we took along a bag of the  trail mix you gave us, and we ate it while bouncing along.   Today Granfaddah has to go out and pick the extra peanuts and raisens outta the cracks and grooves they fell into, before some chipmunk gets in there to feast on our droppings! 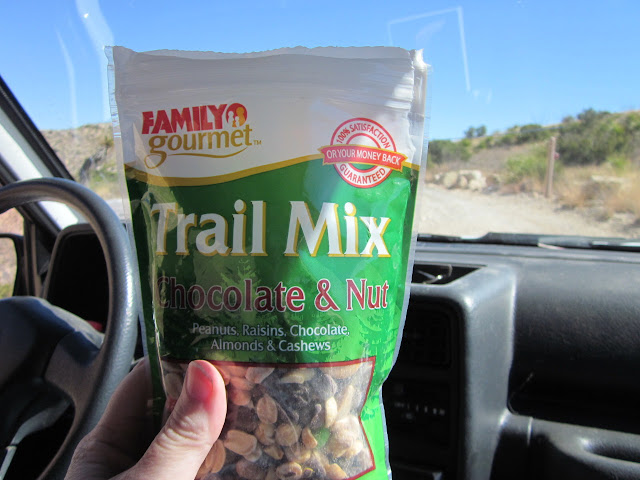 We stopped on a few overlooks and outcroppings.. this one was at Rattlesnake Canyon.
I have pics of me sitting like this in the Badlands, in the Florida swamps, and now ...
I am KarenInTheDesert! 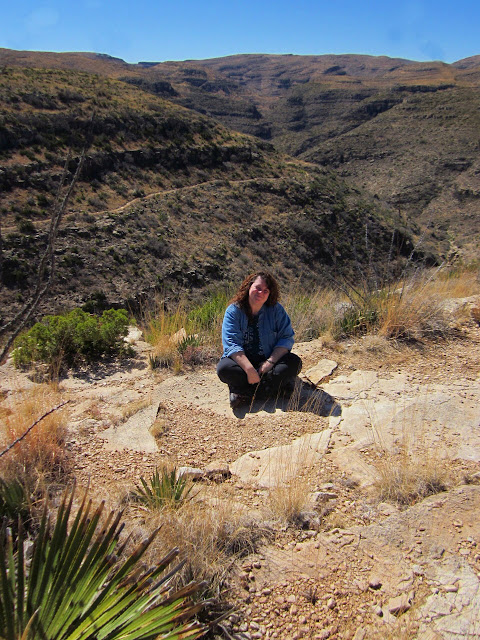 Today we are going to head over to White Sands National Monument near Las Cruces NM!
no miles traveled with the motorhome today
97 miles traveled in the Tracker
Posted by KarenInTheWoods at 8:18 AM