(this post is for both Saturday and Sunday...
we been having so much fun, it's hard to get caught up on posts!)

Ahhhh sipping the coffee and waiting for that POP of the sun up over the Swiss Helm mountains.  It happens in less than a minute, and then the valley is bathed in golden sunshine!  How strange... something I will never forget!

We kinda laid around this morning while I finished up some socks that had I knit the night before.  Steve putzed and puttered with a few minor repair tasks.    He fixed a socket for a rear directional taillight.  The wire had broke off and he re-soldered it back on.  He also repaired a door latch, and replaced the pressure relief valve on our hot water heater as it was drip drip dripping.  He had another along, and was just waiting for the right time to get to it.   He also washed the rig and tracker, complete with windows too! I did a lick, dash and polish on the inside too... and voila!  Our household tasks were done!

We packed up our water and sunscreen, tossed the dogs in the Tracker and headed out for Cochise's Stronghold.


This campground is located in a magnificent, rugged canyon that served the famous Apache Indian leader, Cochise, as a refuge against his enemies. As you enter the East Stronghold Canyon, you pass in the shadow of rocks that quite likely served the Apache warrior as perches for his lookouts. The haunting shapes into which the forces of nature have carved those rocks helps make a visit to this charismatic place an unforgettable experience. 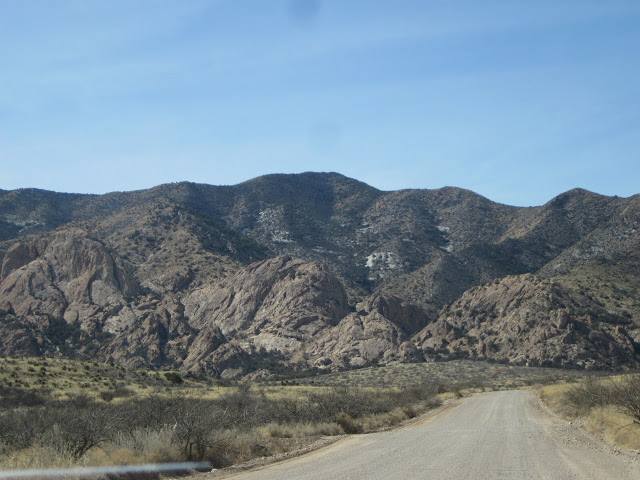 We drove on up through some craggy hills, on gravel roads, and then found the camping area.  Would not recommend this to rigs larger than about 25 feet.  Though we did see a few brave souls with big motorhomes.  The more-spaced out rustic camping before the actual campgrounds were larger and more room.  Once you got in the developed campgrounds, the turns were too tight for a large motorhome or big rig.  No water or hookups either. 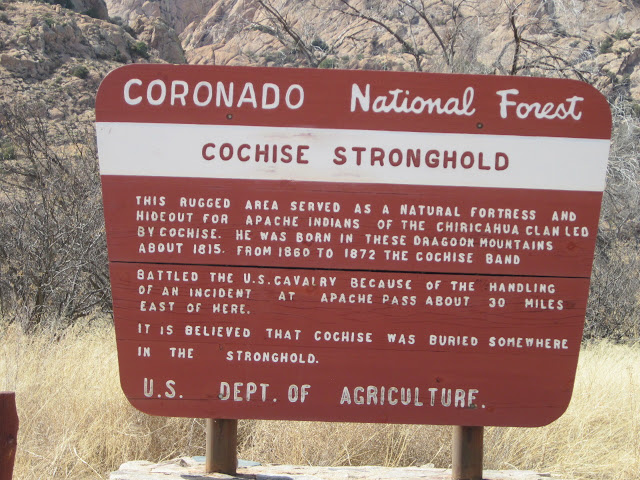 Then on our way back down from the stronghold, we passed a rummage sale.  Had to stop and look, but this gal had everything marked at $5, $10 and $15....  which really should have been marked 5 cents, 10 cents and a quarter!  LOL

We drove through an old ghost town of Pearce, by a mining area and I snapped pics but can not find them right now.  Some of the buildings were now made into antique shops.   We wandered along and then ended up meeting with Jeannie and Ray at their ranch to deliver some custom-made socks... and we HAD to see the three famous donkeys! 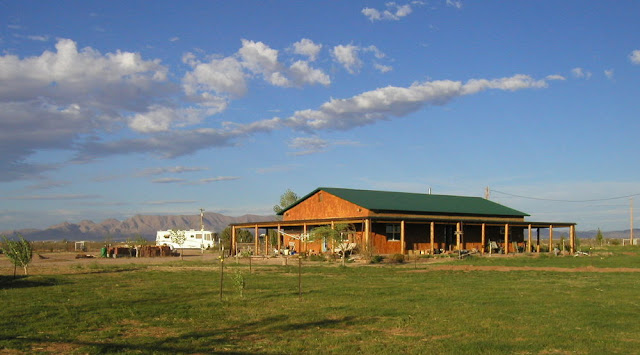 This is Jeannie and Ray... such sweet folks who also love to RV in their motorhome.  Al and Kelly from the Bayfield Bunch kinda introduced them to us.  She is a quilter who just bought her own HUGE quilting machine and Ray is a retired sheriff.  We hung out there for the afternoon, enjoying a glass of wine while the doggers wandered around with their dogs, Gleeson and Pearce. 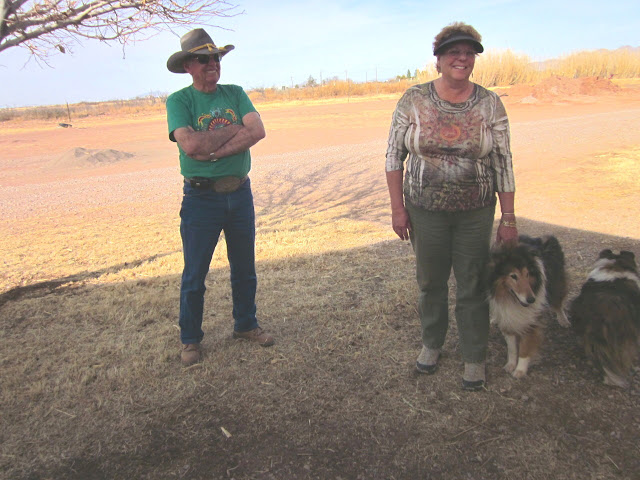 And now... for the donkeys!  Meet Pancho, Sarah and Nellie .... a pet family of daddy, momma and baby~ 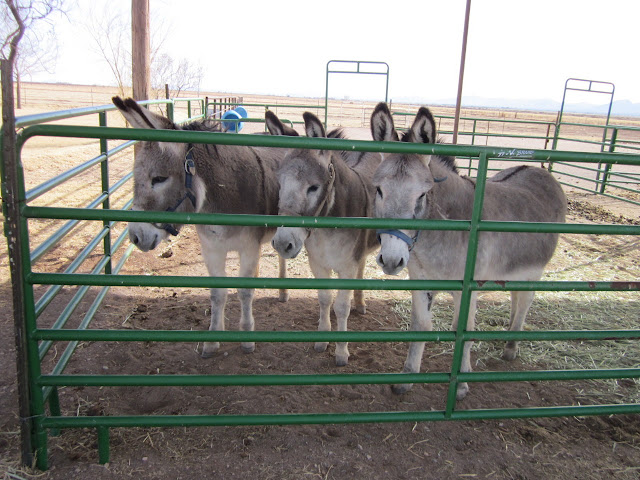 These donkeys had quite an ordeal a few weeks back.... seems in the middle of the night, some unscrupulous folks decided to take down the big back gate, lifting it off it's hinges and setting it aside, and STOLE the three donkeys!   (no way it was opened by the animals, it was removed by very strong humans)

The tracks show them led by people, down the back road, around up to another side road where the donkeys may have broken free at one spot, frantically trying to get back into their fields and back home.  But the skirmish marks ended where they were forced into a trailer.   From there, three days of unknown horrors happened to the little donkey family.  It is surmised that they were used to cart up illegal contraband from Mexico, dragging along behind their tormentors who were the lowest of the most despicable low.   Probably only being moved at night, up through the rocky canyons and around the roads until they were safely north of the border.  Once they cleared the border patrol stop check point in Elfrida, the donkeys were set free on the third night.

Once their ordeal of forced labor was done, the little donkey family grouped together in the dark, heading down the center of the highway.. they were headed HOME!    Someone saw them, and called the sheriff, who then contacted Jeannie and Ray.....HEAVEN'S TO BESTY..... THEIR DONKEY FAMILY WAS ALIVE!    They had a hard time getting them loaded up into the trailer in the middle of the night.. . but man oh man, they were home and safe and sound once again. 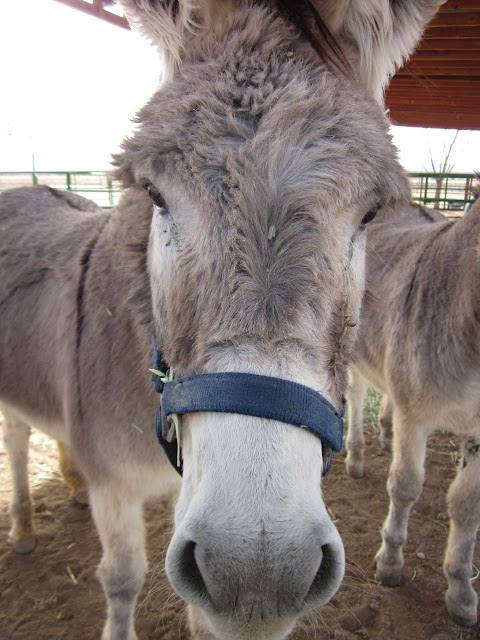 Al and Kelly had posted about the missting donkeys on their blog during the ordeal.  The outpouring of love and concern was amazing... Read the comments on both of Al's blog posts: 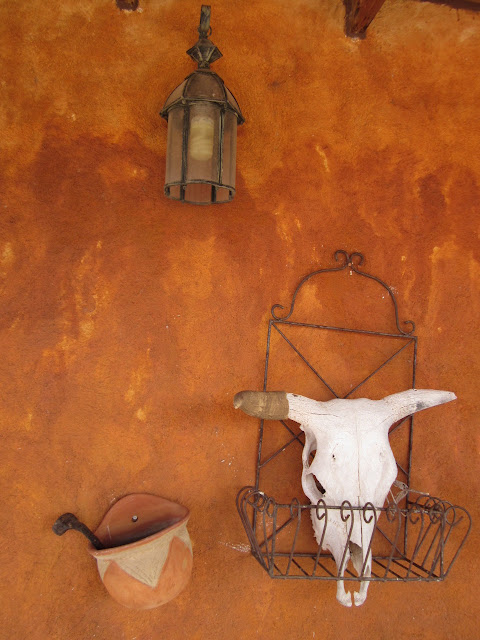 Their ranch house is made of straw bales ... and covered with adobe both inside and out.. what a unique house with huge timbers and a lovely design!   If anyone is curious, it may be up for sale sometime, so check it out!   We left their welcoming place with hugs and promises of getting together in the future.

We got back to our boondocking spot in time for our next visit!  We were cooking out with fellow RVers Rene and Jim for an evening cookout.  We threw some burgers on the grill, Rene made a great dish of beans that had all kinds of wonderful vegetables thrown in to the pot too.  It was so good, I kept a dish of leftovers for the next day.  We gabbed well into the night and had a lot of fun!   They have been interviewed about their special dogs they take care of:


http://www.pbs.org/wnet/nature/ about Jerry's Story
they also have a blog:
http://www.liveworkdream.com/
and a store:
http://www.liveworkdream.com/store/
and an Etsy store:
http://www.etsy.com/people/Tripawds
We sure enjoyed our time with Rene and Jim... they have a lot of boondocking experience under their belts and live in their fifth wheel as they travel around, working while they go.  What a great, energetic and fun couple!  Again, we say "See you Soon" rather than goodbye.

Okay...  second post will combine with the first one here....    We hooked up and headed on out from our private boondocking location.  We hated to leave such a peaceful place, but we were due to head further west for more adventures!   We left the dust and gravel, once we hit the blacktop Steve stopped to hose off the back of our rig.  Good thing we have a hose and faucet right on the rig in an outside bay.  He used our own water on board to hose it off the back, the radiator, and the tow bar area. 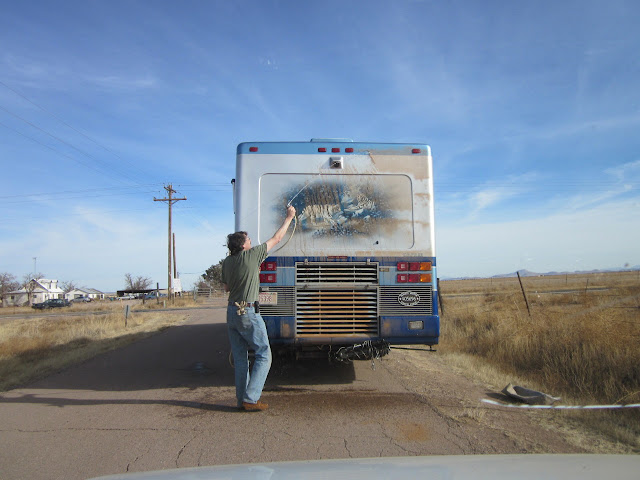 We stopped and fueled up before leaving Elfrida because the price was right...   we didn't need much.


Then we hit the road and headed through McNeal to drop off some treats by Jeannie and Ray, and said goodbye and will see each other again someday soon.

Our RV friends, Paula and Mel from Wisconsin are waiting for us in Gila Bend, AZ.  Imagine that... we live 90 miles apart in Wisconsin, but we have to travel 2,000+ miles to hang out with them!   LOL   They are making their way back home after a winter of wandering around the southwest, and we were able to find a common spot where our paths would cross.

They are at a Passport America park near the first exit behind a Shell Station in Gila Bend.  Free dump and water, plus a quiet parking area behind well behind the trucks.  They paid in advance for a site for us, so all we had to do was pull in and hook up!   With our Passport America discount, it was only $13 a night for full hookups and 50amp service.  Not that we needed it, but we wanted to hole up here as high wind warnings were due the next day.   The very clean laundry room was $1 a wash and 75 cents to dry, and each load was fully dried on the first set of quarters, not needing additional ones like many places.  So I did up four loads of laundry at once, instead of doing smaller loads in our rig's washer/dryer unit.  Paula was so sweet and cooked up a great meal for us, so we didn't even have to bother with cooking after a day's travel.   We sat out in the warm summery feeling night, gabbing until 11pm or later.  Life is good and we sure are enjoying the contrast to the cold and snow of up north!


We went to bed with smiles on our faces,
and happy traveling in our dreams,
and wandering in our hearts....
Posted by KarenInTheWoods at 8:34 AM