VACATION - Met up with fellow Wisconsinites in Gila Bend, AZ

On Sunday afternoon we pulled in backwards to have our doors face each other with Mel and Paula from Wisconsin.  We both own Safari rigs, and have camped together before.  Paula is also a quilter and Mel is  retired so they can travel their winter season down in the desert.   She does some quilting on the road, and is looking for a Singer Featherweight 221 in case anyone has one to sell?

Paula had a great goulash ready for us, salads and radishes for the guys... and we feasted on a table between the rigs.  The weather was warm and we sat out long after sunset,  and enjoyed the warmth and camaraderie! 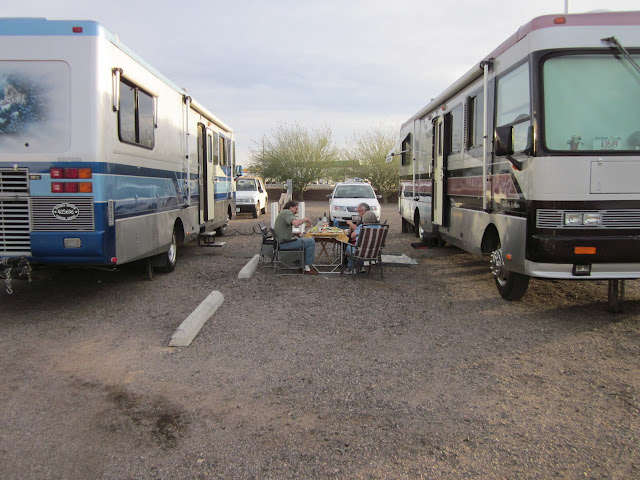 Monday morning, Paula took me into Gila Bend so I could ship out some packages, and we hit the grocery store.  We found most of the prices okay, and a few of the products were different or strange.  I loved the labels on the bricks of "Wisconsin Cheese"  but made in Plano, TX ????    The deli guy carefully cut up 2 pounds of sandwhich ham for me, but left the plastic wrapping on the ham, so now we have to pull off the strands of printed plastic wrapping with each slice as we use it...  LOL   Our grocery shopping complete, we also grabbed the guys a treat of some McDonald's burgers and chicken sandwiches, so we got outta cooking and could get out on the road sooner to do some day-tripping sightseeing!
It was much too windy to do any traveling with the RV's ... but we had been thinking of going down to Organ Pipe nat. park.  But I think we decided to stay right where we were and go out for a day trip in the car.   I popped a turkey breast in the pressure cooker, and we set the dogs into the back of the rig with the AC on while we were gone in case it got too hot.
Before we even got outta Gila Bend, our guys spotted some other folks with vintage Safari rigs of the mid-90's era as our two rigs are.  They saw one in a campground that we had to go in and drive around it... so they could determine the floor plan, figure out the year and model, and analyze the modifications or repairs the owner might have made over the years.  The owner never did come out, but our guys gave it a good going over from the safety of the car.   LOL 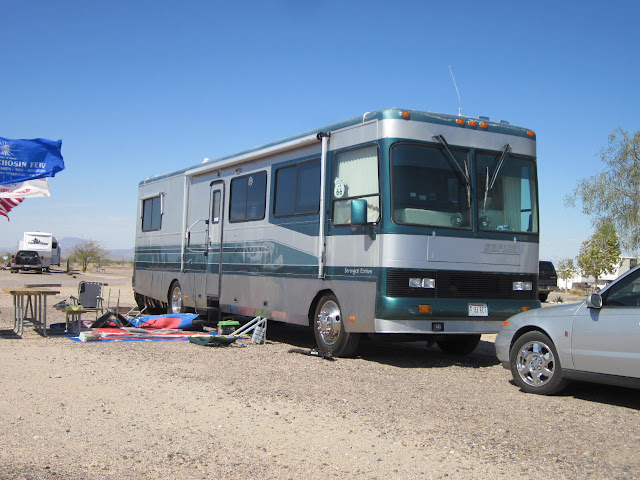 And here was a Safari Ivory, that was heading out of a parking space.  Our guys had to *stalk them* so I could snap pictures quick, as they were leaving.  It had a great pair of Toucan's on the back, and their side entry door had a stained glass panel of toucans too... how cute! 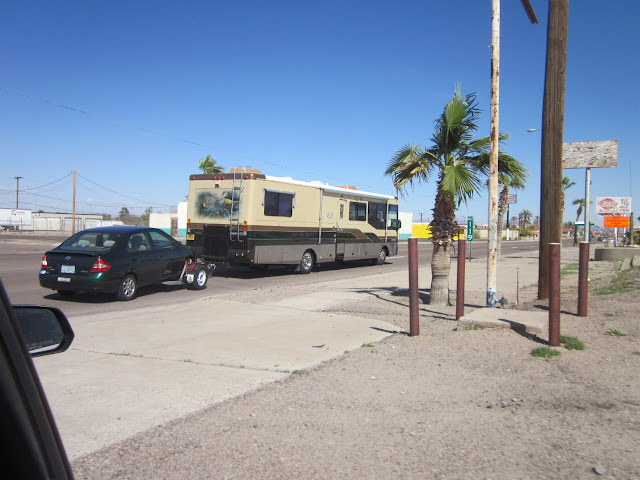 Once we got the guy's minds off Safari's ... Mel drove us out to a Petroglyph site to scout it out.
Petroglyphs at Gila Bend, AZ

The Painted Rock Petroglyph Site is located on the eastern edge of the Painted Rock Mountains and about 18 miles west by northwest of Gila Bend, Arizona.  This area is mostly flat and sandy with May -Oct daytime temperatures in the 100's. The annual rainfall here is only about six inches and the nearest irrigational water is the Gila River. In prehistoric times the Gila flowed west out of the Mountains of western New Mexico, made a big dogleg turn at the town of Gila Bend and continued west to empty into the Colorado River. The Hohokam people once lived and farmed here. Ruins of their late Pioneer Period (AD 350-AD 550) and Early Colonial Period (AD 550-AD 700) villages are found to the north and west, and ruins of their Sedentary - Classic Period (AD 900-AD 1400) villages are found to the south and east. 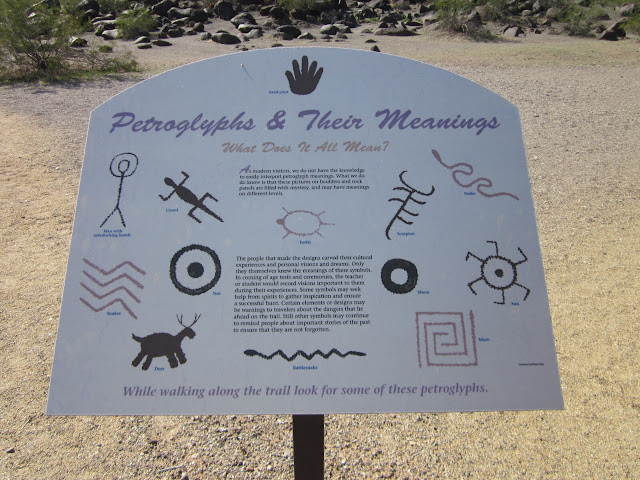 We walked among the rocks and made a determination. 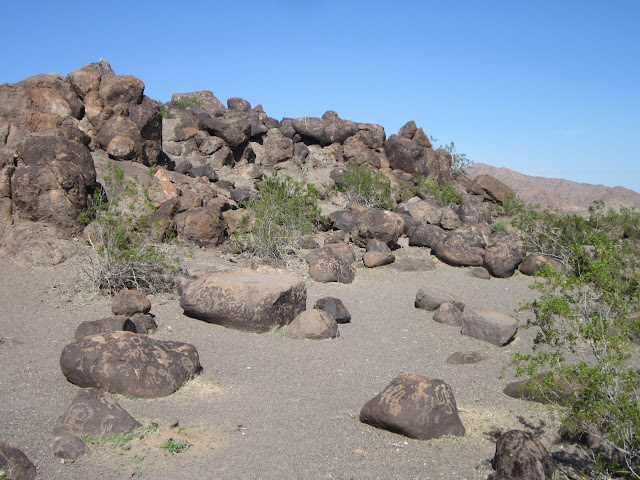 We figured either an ancient tribal mother had too much of a hassel dealing with her kids, so she sent them out to make drawings on some rocks to get outta her hair while she was cleaning the cave......

or a bunch of ancient teenagers were being rebellious and this was their graffiti!


(why else would you cover a single hill in a bunch of haphazard drawings
and not do it on a regular basis like posting a story in a row of rocks to make it come together?) 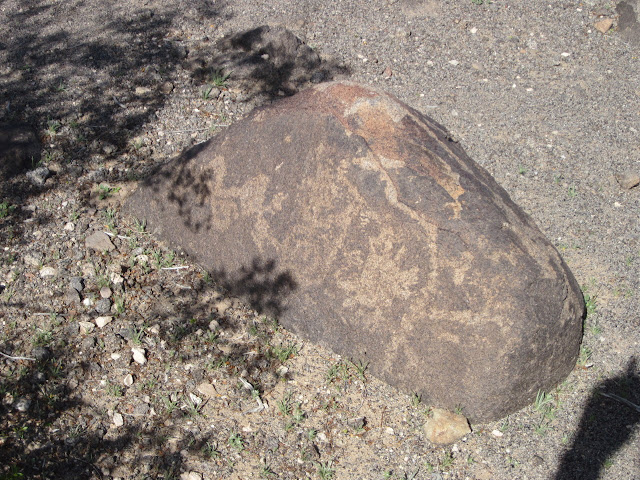 We did our "Tourist Thing" with a saguaro 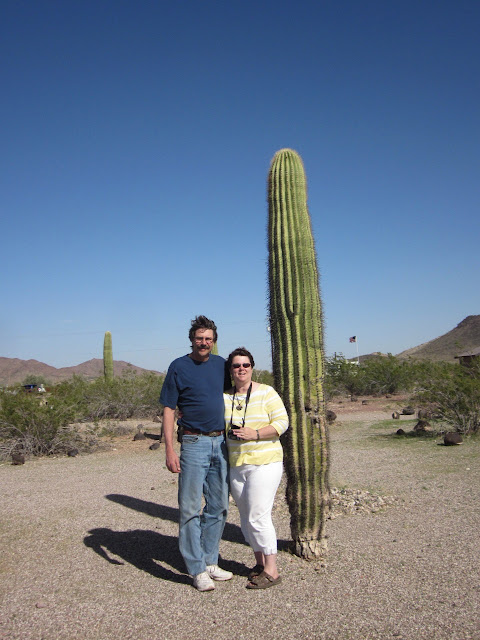 We saw a little bit of "wildlife" as this guy was sunning himself on one of the petroglyphs!~ 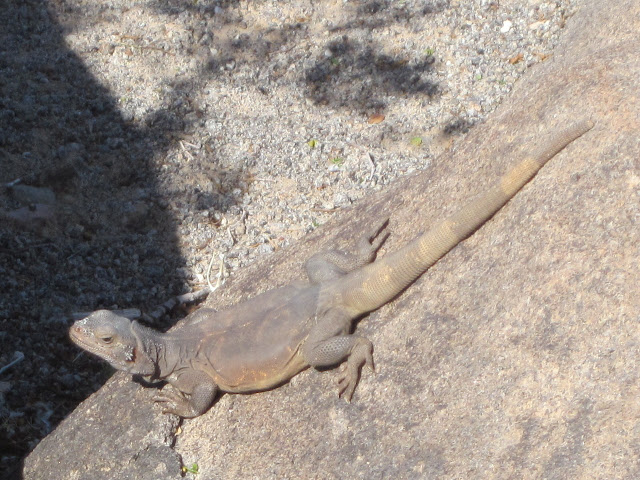 Mel decided to turn his Saturn car into a four wheel drive off road vehicle again, and took us on a desert tour.. through washes and dry creek beds, over hill and dale... to explore the surrounding area.  There are campsites near the petroglyphs, that can easily accomodate a big rig, and I think we might go there again some time.  Mel took us offroad to explore areas beyond the campgrounds... just to see what we could see? 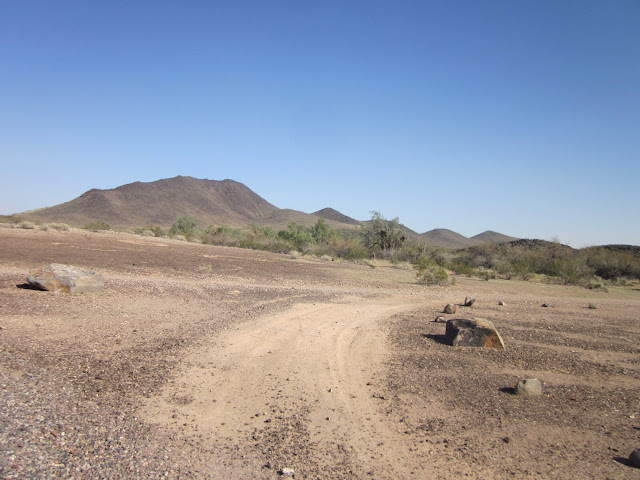 Paula gave us a nature study on our walk... explaining about the local flora.... 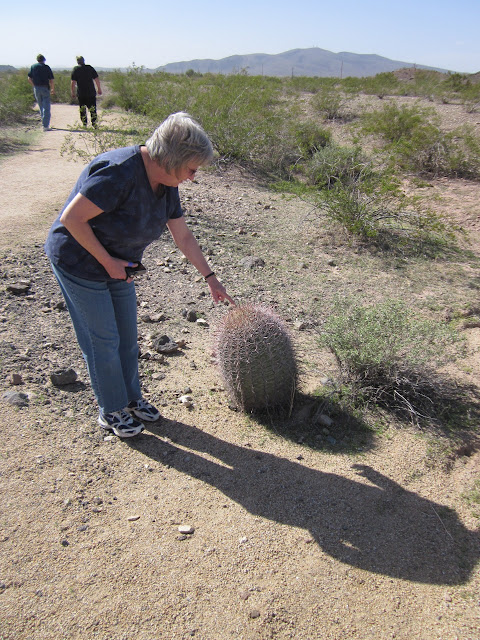 Here is her artistic rendition of "Woman With Interlocking Hands" motif on the petroglyphs! 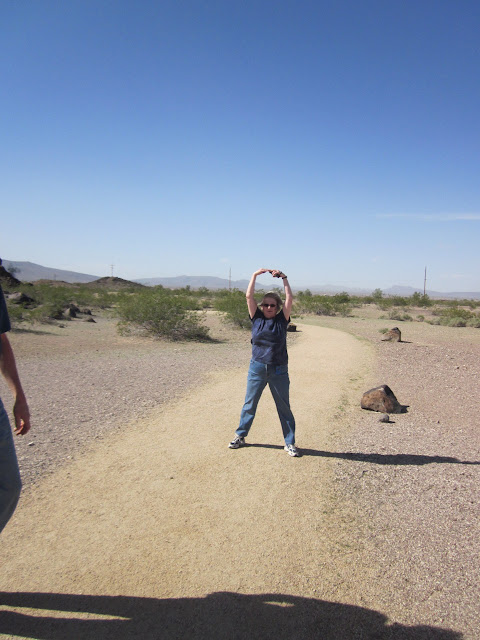 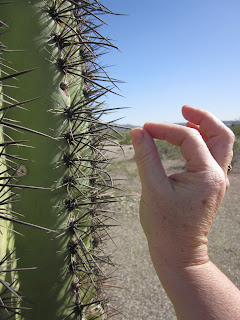 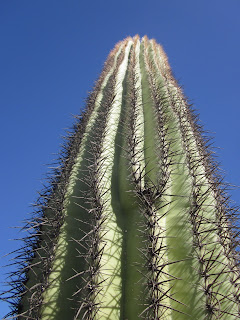 When we got back from our journeys.... we had a nice meal waiting for us.  Sat around in our rig till late, talking and laughing and sharing and checking out fun stuff to do next! 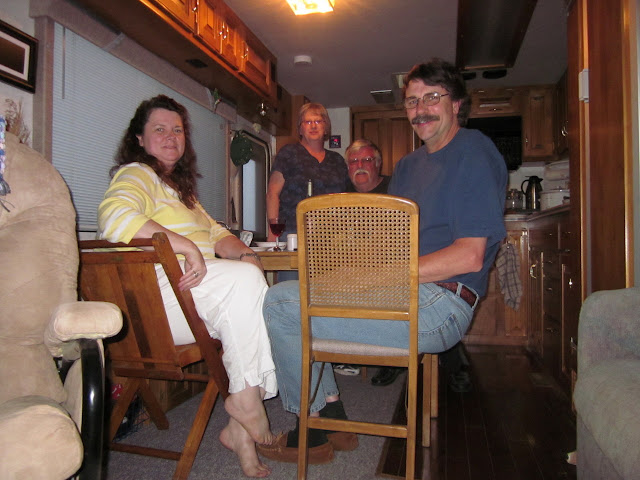 We sure enjoy you guys, Paula and Mel!

.
Posted by KarenInTheWoods at 1:56 PM