No no no!   I mean "dyeing" as in YARN, not "dying" as in Death, silly blog readers!    I was sorting out some of my yarns and had a bunch of plain average looking wools that needed a sprucing up of color before I sell the skeins.  This yarn is a bit too thick for my sockknitting machine, so I decided to put some nice fat skeins on Ebay with custom dyeing colors.

I have some dyepots that are specifically labelled "DYES ONLY" for using dangerous chemicals.  I don't like using the bad chemicals, so now I mostly I dye with food safe colors as in kool-aid, easter egg dye tablets or Jaquard brand dyes.  Then I don't have to worry about contamination or bad fumes in my lungs.  Rosie is taking my dye stuff home with her next month.  I can continue to dye if I want in food safe containers like my soup pot when we move into the motorhome. 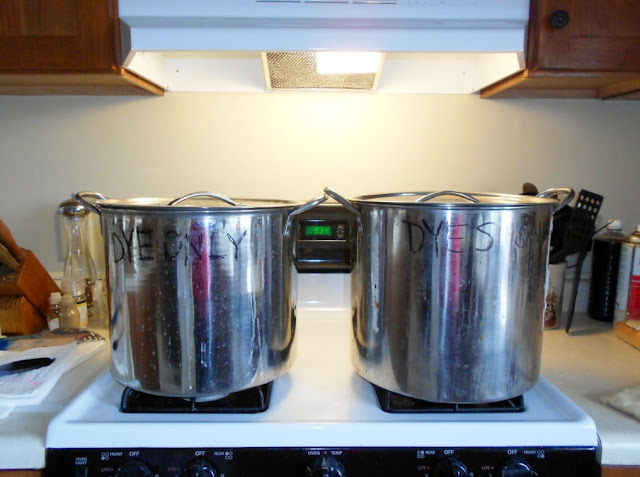 I put the pre-wetted skeins of yarn into the pots, one at a time,
and sprinkle the dye on top of each skein.
The water has some vinegar and salt added.
The dyes slowly sink down as the yarn is steamed (never boiled) 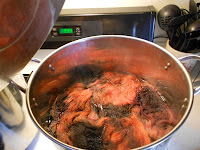 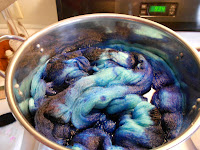 About a half hour later, all of the dye is absorbed into the wool!
The water runs off clear.  I rinse them a few times to get out the vinegar smell and
I hang them outdoors to dry and freshen up.
These are three huge commercial skeins of yarn that I dyed in tones of blue,
and the others are coral/salmon color that I added browns to them. 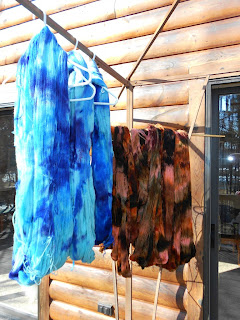 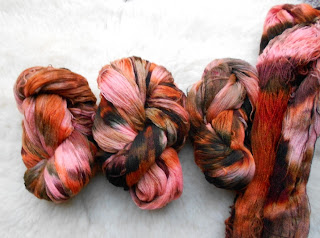 Next up were some average 4oz skeins of wool that were blah minty green or a strange blue. I lay them in turkey roasters with each skein on their sides, and make stripes with the dyes. When knit up in socks, a hat or a scarf, they make a nice repeating pattern. 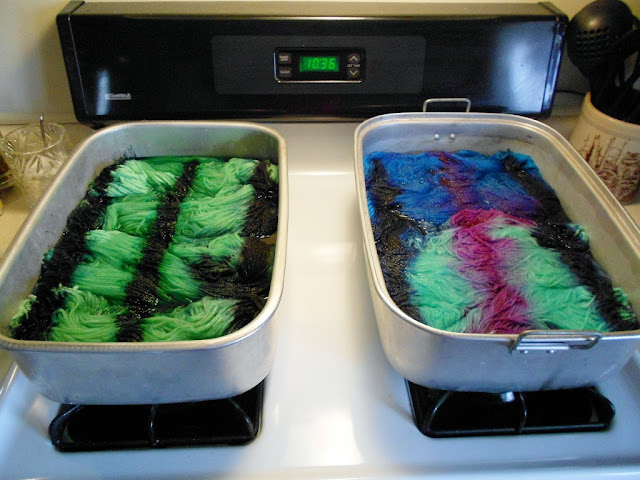 WOWZER they sure came out purrrrrtttyyyyyyyy!!!! 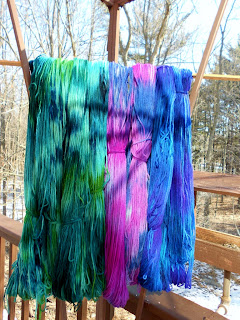 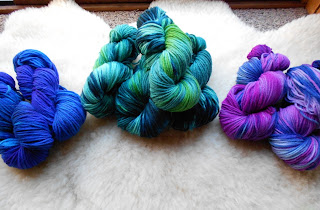 I got that dyeing done on Monday.....

Then on Tuesday the wee little Chelsea girl woke up with a fever!   Her mommy dropped her off here before work as the daycare of course doesn't let sick ones in.  When she got here, she was full of silliness and great appetite and kept herself very very busy!  She was helping me twist more fringes on the edge of a rug.  And such concentration for a 2 year old is quite amazing. 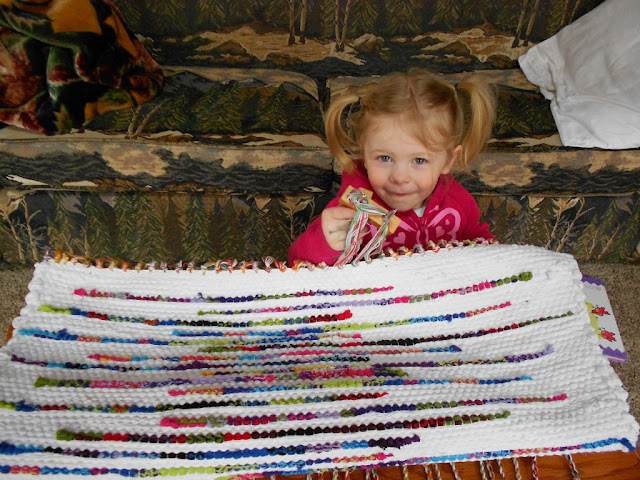 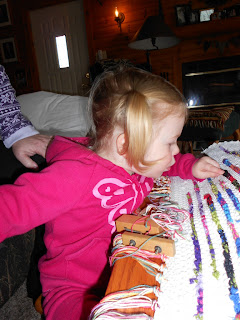 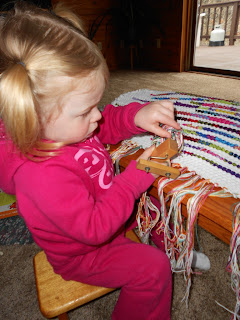 It turns out her fever was from the long-awaited eye teeth to arrive, which they did sometime during the day.   She spent the whole morning being creative before konking out for a long nap.

She woke up to Miss Ellen and Miss Connie who came from Illinois to dismantle my favorite rug loom, a Newcomb Studio Loom.  Once that little stinker saw the wonderful array of sockets and wrenches and pliers in my tool box, she was busy busy busy!  Granfaddah would have been sooo proud to see her working!

She wrenched and twisted and matched up sockets to the heads of the nuts and bolts on the loom.  Quite a busy girl for the hour or so it took to dismantle the loom.  Can you imagine doing that with a 2 year old underfoot?   I didn't take any pics, but I did do a screen capture from the video camera we had recording the whole process for Ellen.  That way Ellen can re-assemble the loom by watching the video tape in segments backwards. 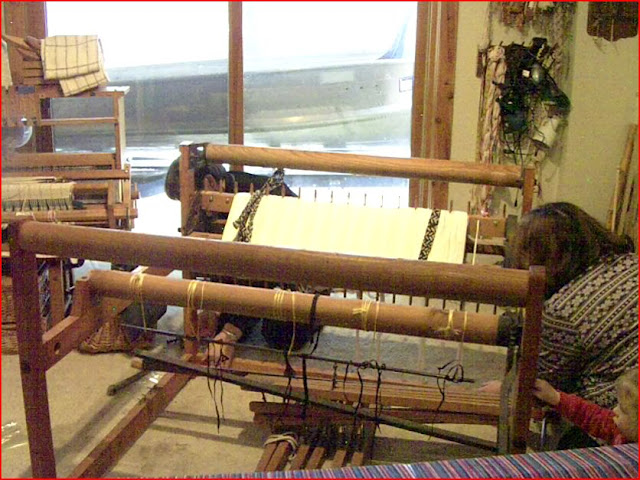 Can you see Chelsea in the lower right corner???  Such a Loom Mechanic!
Sadly, the loom was loaded up by Ellen and Connie into her van, destined to a new home with someone who will love it as much as I did.   Sigh.
The big blanket loom will go on Sunday... and the other Union rug loom will go in mid-March.  Then I will be down to my last Union rug loom and Tools of the Trade table loom (those both go with me)
Last night we were warned about an impending snow storm.  At first, the weathermen were not sure where it was going to hit.  We were right on the border edge of the storm between massive amounts of snow (2 inches falling each hour)  or freezing rain and sleet.  We got the snow.  We woke up to about 8-10 inches of heavy wet slushy snow.  Steve took one look out the window at 5 am and thought "heck with it".  He decided to call in to work. This is the second time in 14 and a half years that he has ever called in on a snowy day!   (he has to use up a day of vacation pay to make up for it)
This is what we saw out the window as soon as it was light.... 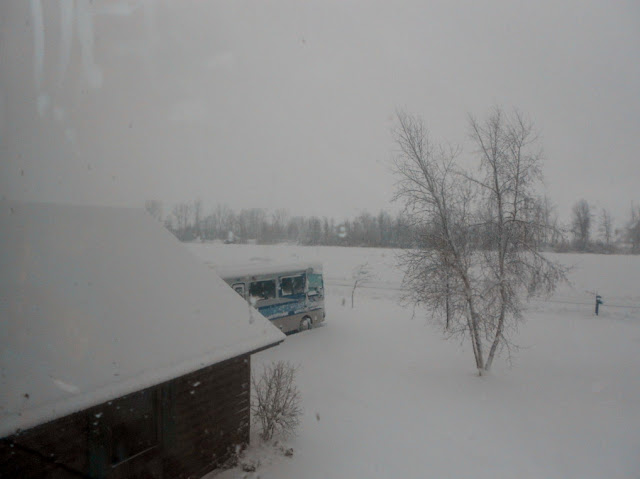 Yes, the plow went through, one swipe, but left a huge pile of thick chunks blocking the driveway.  When snow is this wet, it doesn't blow through the snowblower very well.  But if you don't get it shoveled out of the way quickly, the upcoming decrease in temps will freeze it thick and solid as a huge chunk of ice!    We enjoyed a cup of coffee and some sweetrolls before he trudged on out to take care of it.  The neighbors next door left for work before the plow went through, so both of their driveways were plugged up too.  My darling Steveio took care of both of them plus ours.  What a way to spend a "vacation day", huh?
Poor Duke is up to his belly in the snow.
His little legs poke right down into the thick snow and he is wedged into place!
He actually "peed" while laying down in the snow!  LOL 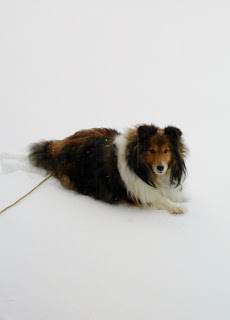 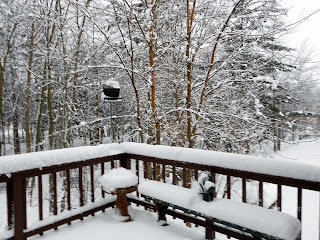 Duchess said "heck with it" and stayed up on the porch! 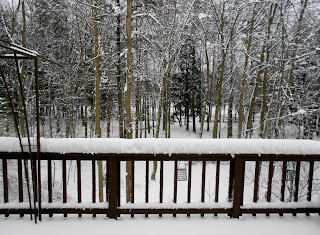 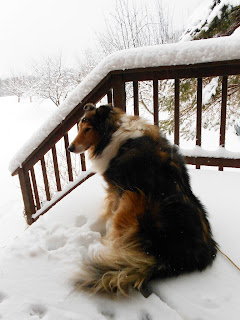 I guess winter is finally here.  We lost some branches off our trees, and our cedars and arborvitaes out front are bent wayyy over.  There are power outages all around us, but we are still on.  We are due for high winds kicking up, and more snow tonight, falling temps and freezing.  Let's only hope it melts soon and spring will be here before we know it??????

Posted by KarenInTheWoods at 12:04 PM