The snow kept falling and the winds kept blowing.  The temps went down in the single digits last night and the wind chills were well below zero.  Little critters are coming to the feeders and this silly squirrel was right up to the patio door, asking to come in!!! 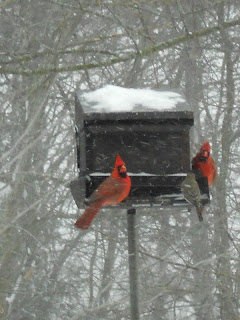 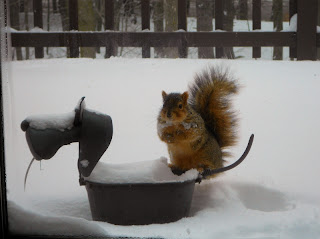 We had planned to take little Jameson for Saturday night, but then on Friday his mommy called and asked if we wanted to steal him a day early.  OF COURSE WE DO!

So we trekked on down to Green Bay to get him,  first a quick stop at Erberts & Gerberts for a sub (my favorite is Boney Billy)   http://www.erbertandgerberts.com/   Whenever we go to Green Bay, this is the only place I am even interested in getting a sandwich from.   Yummmmmmm

.... and next stop was Menards on the west side of Green Bay. It is closing up in preparation for a move to a new building.  We needed new cabinet knobs, so we popped in. LOTS of stuff on sale, some things even 50% off or more.  Got 30 nice cabinet knobs that were 3.39 each down to 1.42 each.   And a whole bunch more odds and ends we needed to grab too for final house fixups.

Then we grabbed the little guy for the weekend.  Loaded up his bag and booster seat in the Tracker, he was so excited to see a NEW Tracker for Granmuddah and Granfaddah!   We stopped at our son's house to drop off Valentine treats for them and Allegra--- our son Dan cut us a new mirror for the downstairs bathroom so we picked that up too.

With all of our errands completed, we headed on back home, through the cold and ice and blowing gusting winds.  Whew!  But the Tracker was good in four wheel drive, especially on the icy country roads.  We made it home safe and sound.
The Bestest Little Helper Boy was eager to learn about putting on cabinet knobs.  He figured it out right away and was screwing them on in the right direction.  He helped put on every single knob of the lower cabinets with Granmuddah, while tall man Granfaddah did the top cabinets. What a good little handyman! 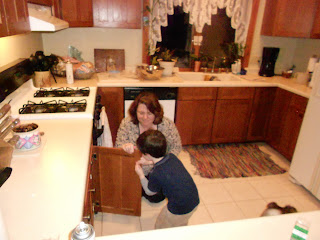 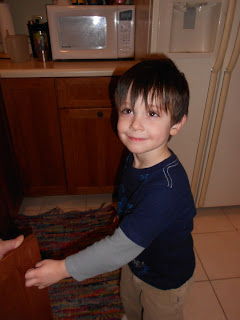 After a hard evening's work,
Granfaddah decided that someone needs to learn to make popcorn.
Jameson declared that he "baked popcorn"    Okayyyyyyy???? 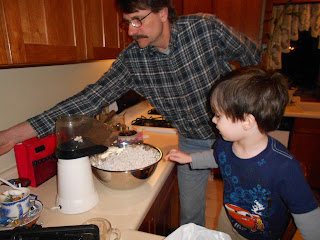 Soon they were gobbling it down together... and they ate it ALL!!!  Yup, every kernel was gone.  Guess putting in cabinet knobs is hard work, eh? 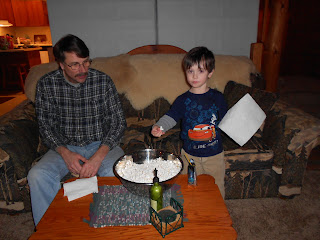 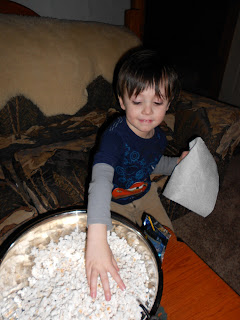 Before we knew it, I was popping Jameson into his jammies and he was konked out, and so was Granfaddah.  Guess all that popcorn really filled up their tummies.   Jameson was up bright and early at 6am, snuggling in for a cuddle before finding more fun stuff to fill his morning.
At 1 pm this afternoon, the carpet guys are coming back to finish the loft.   They already got the pad down and the tack strips, but waited on bringing over the carpeting in the snowy blustery winds yesterday.  It's a big section to be seamed into a 24x19 piece.

Jameson is going to have a blast watching the carpet guys do their thing!


In answer to a comment on yesterday's blog, yes, they have to bring in the rolls and cut and space it out inside the house because there is snow and ice outside.  That is why we had to move every stick of furniture out of each room during this process, room by room.  Cramming it into the next room because there is no other place for it to go.  If it were summer, we could pile it all out on the decks and patio, covered in a tarp.  But I don't think that would work so well in the winter either.  LOL

Steveio is starting up some pancakes for breakfast.  I guess it's time to refill the coffee cup and find some fun things for this little guy to do today.