Bathroom and Doors and Weaving

We got a lot done again this weekend....

We did a thorough going over of the master bathroom.   First we cleared out "stuff"....  check out how much "stuff" we had over the washer and dryer!!!  Good thing this all hides behind the folding mirrored doors, huh?  (the bifold doors were removed before this pic was taken) 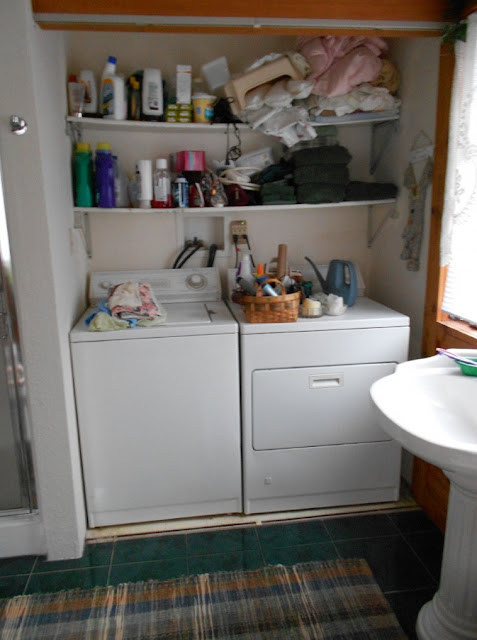 The whole bathroom got a fresh coat of paint, same color as before but just cleaned up and brightened up the room.    The ceiling and all the interior walls needed paint.  The two walls along the exterior of the house are all pine, so those don't need any paint.

The inside of this washer and dryer closet was all freshly painted too.  We bought new shelves and added a third bracket to each span to prevent sagging.  It sure looks nice now that it's done! 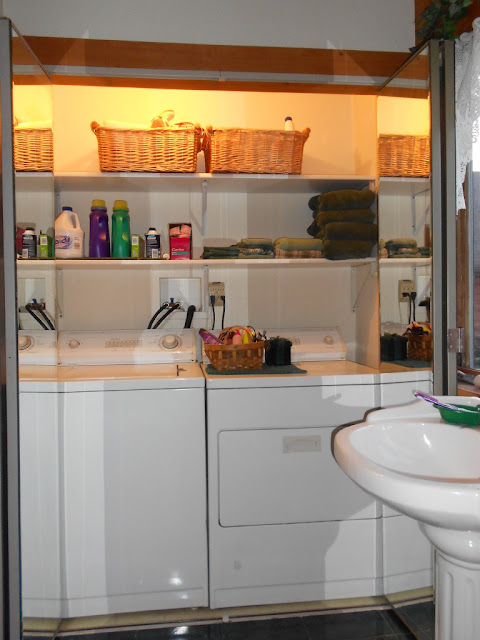 We put only the most important things back, and culled the rest to either donate or the dump.

Then we had an incident ----  my insistence on adjusting the bi-fold mirrored doors.  For over 14 years I have asked REPEATEDLY for Steve to adjust them "upwards" on the little pivot point on the bottom.  Year after year, I have asked him to adjust the bifolds, as they were always scraping and grinding and binding along the bottom track. He always grumbled that they could NOT be adjusted.  He can reach down behind there but I can't.  My arms are too short to reach down while leaning either over the washing machine or the dryer.   I asked him why can't the pivot be adjusted on the outside bottom with a thin wrench.  He said : "NO" .... Well, why did they include that cute little flat wrench then?

About the third year of ownership, the doors dragged so much that one panel CRACKED the mirror when opening it!!  That year we had to buy a new double set as they didn't sell the singles.   (There is an extra bi-fold door now in the basement we are planning on leaving for the new owners)

Well---- this time,  while the doors were off and laying on the floor, I took a good look at that bottom pivot point myself.  Lo and behold, there IS an adjustment, just as I had figured.  AND it could be reached from the outside on the bottom with the little flat wrench!

Mr. Fix It was goaded into working on them, and they are finally adjusted === and they work PERFECTLY!  The sliding doors have never, ever, ever worked this good!!!  Effortlessly gliding open and shut.  No binding, no scraping, no grinding.

I wrote on the cute little wrench with an indelible marker: "TO ADJUST BI FOLD DOORS" and hung it from the shelf above the washing machine... for the future owners.  LOL

So here are the finished walls around the bifold closet doors, around the top of the shower, and also the painted wall goes around the left behind the toilet and around to the master closet/changing room. 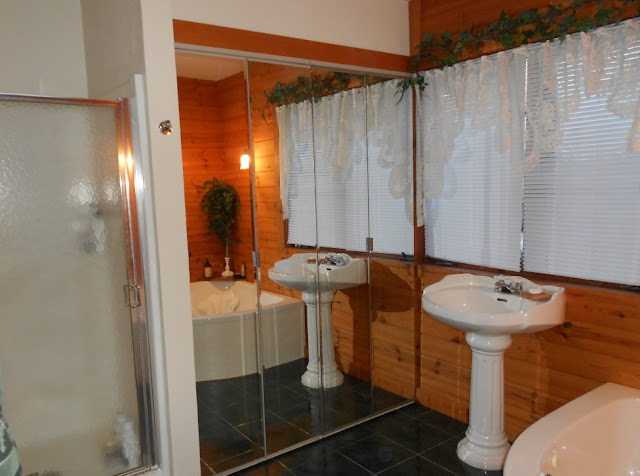 These walls behind the sink and around the tub didn't need any paint, but I did dust off the light fixtures and the hanging ivy over the tub. I am thinking after all of our work today, a nice soak in the whirlpool is in order.   Hmmmmmmm? 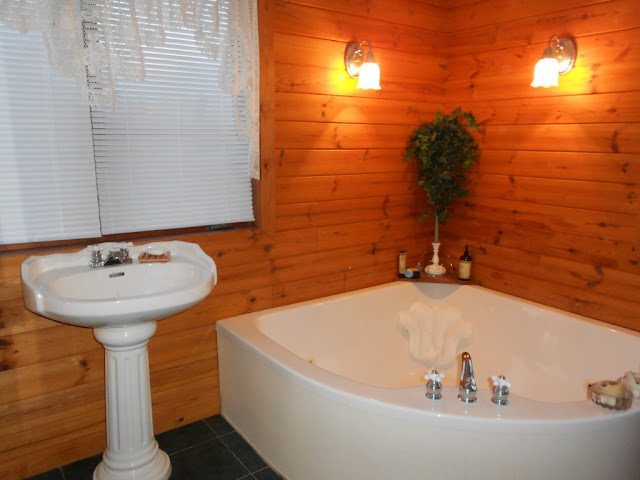 Once the bathroom was done, I had to keep on painting, you know how that goes.   The brush and roller were still wet with paint.   So I did up the interior sides of both of the entry doors on the east and west sides of the house.  Got rid of all the doggie paw marks and little grandtot dings and scraps.   My locksmith hubby removed the knobs for me, and put them back on when dry. 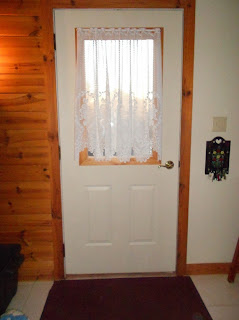 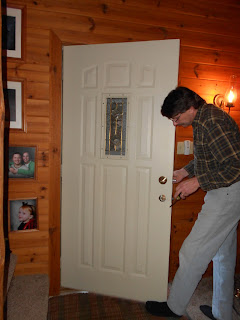 I did take a little break this weekend to get some weaving done too.  Soon this loom will be going to a new home, so I whipped out this rug and finished another one down underneath it, already wound on the takeup beam. 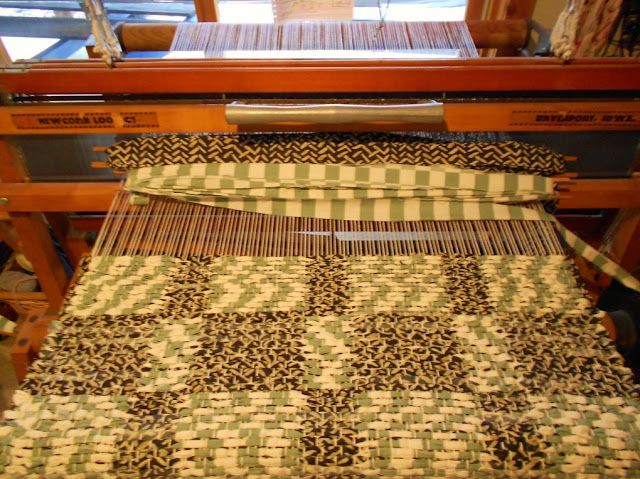 The biggest loom might have having a new home this week too.  I had started this blanket a while back and decided to finish it off.  Well, not quite but I got a lot more done than I had, so I should finish it up by tomorrow. 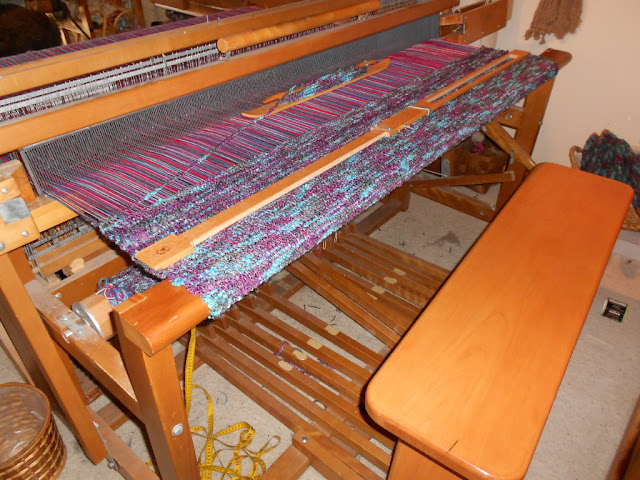 On motorhome news... We did a Fleet Farm run this morning.  (farming/automotive chain in the midwest)   Steveio picked up 32 quarts (8 gallons)  of diesel oil for the motorhome, as he is going to get an oil change done as soon as it warms up a bit out there.  For now it's amazingly spring-like in Wisconsin.  We were up to 38 degrees today and sunny.   But never fear, our weather is known to turn on a dime, and we can be buried under feet of snow as late as April.
He also picked up a headlight relay switch for an operation on the rig... seems Safari headlights are pretty dim, not wired properly from the get go.  The guys on our yahoo group  http://groups.yahoo.com/group/SafariCoaches/ have found that wiring in a relay with a better source of 12v can make the lights brighter.
Last weekend, we had bought a trailer hitch for on the back of the Tracker.  Today at Fleet Farm, Steve picked up a shiny new ball and locking hitch pin for the receiver too.  That will also be a warm weather day project in the garage to get it bolted up and into place.  Although we are selling our boat to our kids, we may wish to *borrow* it when we come back into the area in the summers....   so it's a good idea to have a hitch, just in case!
In family news---  soninlaw Mark made it home safely from working down in Arkansas for a few weeks.  Little Chelsea is so happy to have her daddy home again, as is the very pregnant Erin.  It's a relief to have him back, safe and sound.
Heather and Jesse called this morning from the airport in Milwaukee, they made it home too from their week long vacation down in Florida at Micky Mouse's house. Little Jameson had a blast and they will have memories that last a lifetime.  Jesse's wonderful parent's, Lisa and Kevin took them all down as a Christmas present.  What a great thing to do and Keven also enjoyed turning 50 in the Magical World of Disney!
Well, I am gonna pop some ibuprofen  and hop into that tub.... ahhhhhhhhhhhhhhh
.
Posted by KarenInTheWoods at 7:49 PM