My Stinky Steveio insisted we need a better fan in the bathroom of the motorhome.  The little wimpy one sounds like a jet engine taking off, and he wanted to get a BIG BOY FAN instead.

In the kitchen we already have a Fantastik Fan which works great near the stove.  But Steve had read reviews about the Vortex Fan and decided he needed one.   It installs inside the regular vent hood lid, so it's only an "inside job" and not a major roof tear off and replacement of the whole housing.

I ordered it for him for Christmas, but didn't realize the one I ordered was only the single speed, with just an ON and  OFF push button.  Shame on me!   He wanted the THREE SPEED fan version.  The price difference was $40 more, plus $14 to ship it back and $14 to get the new one shipped to us if we exchanged it.  Well, for almost $70, he decided to adapt the one we have.  Smart man!   No wonder why I married him, hey?

Ahhh here is a pic of the original push button and the new 3 speed auto heat switch he bought that is made for cars. (It's a 12 volt turn knob type switch with tiny rheostat in the switch that will allow the speed to be controlled by voltage) 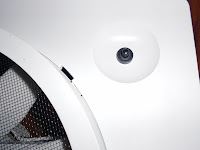 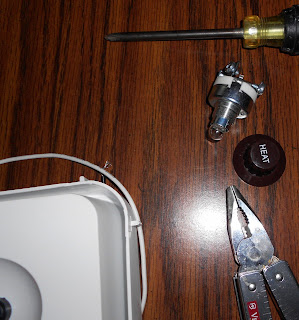 He had to drill out the hole a little bigger to accommodate the new switch, and also pare away a bit of the lip edge of the control knob on the outside.  I know it says "HEAT" on it, which I later covered up  the letters with a brown fuzzy stick-on bumper pad!   LOL 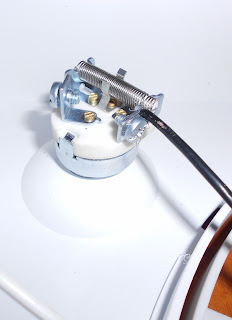 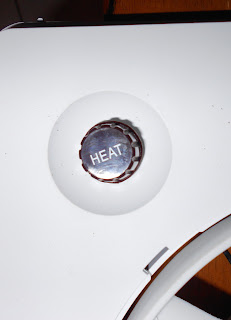 Okay.. so here is the adapted fan all ready to be installed.  We waited for a warm day to go out and fire up the furnace in the rig and work on the fan swaparoo. 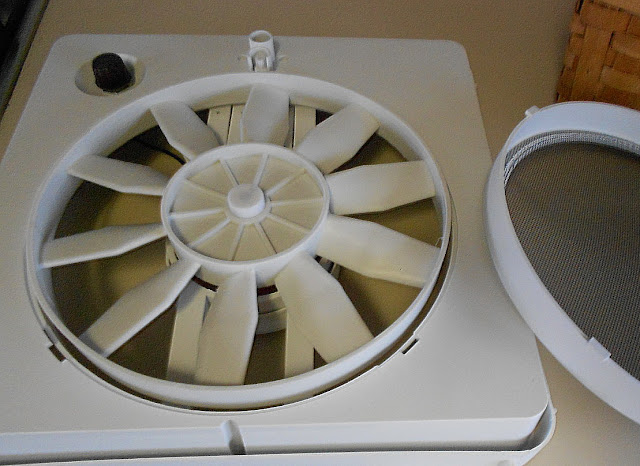 The first step is to remove the old fan...
Unscrew the crank handle, and then unscrew the surrounding shroud 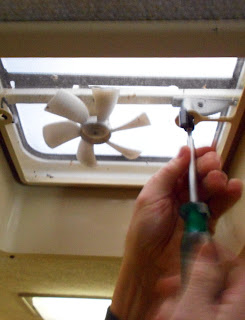 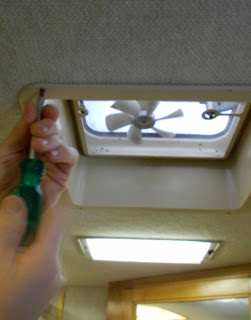 Now the little fan needs to come off.  The instructions say to just pull on it.  Yah, right... the plastic is so old and brittle, one of the fins broke off right in Steve's hand.  The plastic fan slides off the axle of the motor unit with a good stiff tug.   Now there are two screws under the fan that hold the motor in place.  Remove those and carefully unhook the power lines.  Cap off the wires with the wire nuts so you don't accidentally touch them together. 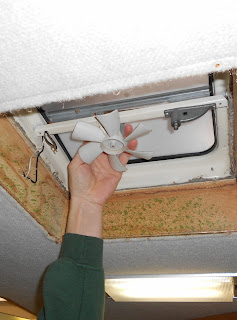 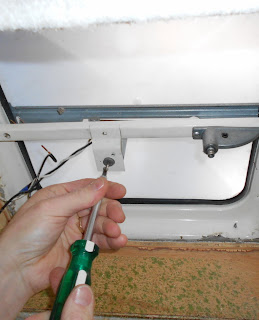 Here is the removed fan...  the blade is broken off, but the motor is still good. FREE to anyone for the price of postage!  Email me at pfundt@gmail.com   if you want it! 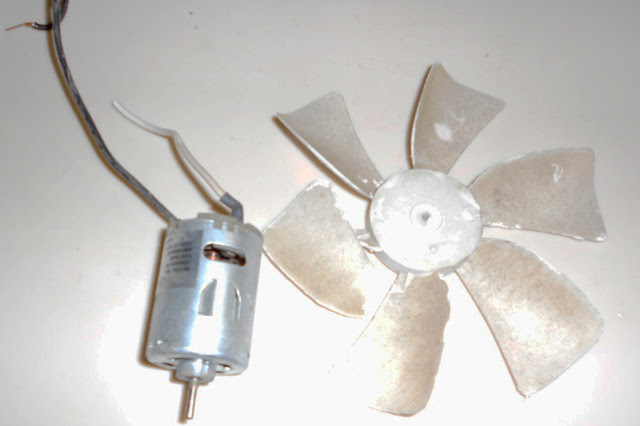 Now we test-fitted the fan into place, and checked out if the gear meshed correctly into the crank mechanism.  Nope, it didn't. But, never fear, the company added an adapter for the brand of vent hood we have in our rig.  We were in business, Steveio screwed in the right pieces and we were good to go! 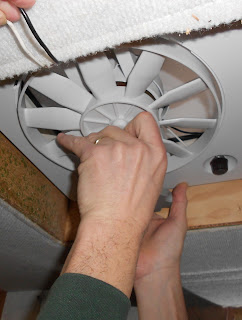 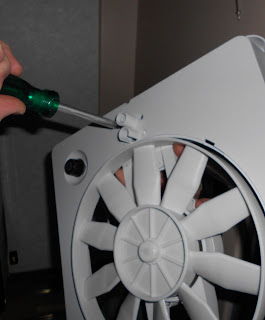 My hard-working Steveio--  a man on a mission!  Now we were able to attach the right wires (checked with an amp meter to be sure they are correctly wired up)   Two screws secure the fan into the existing support brace from the old fan. At this point, we double checked all the connections and made sure that the knob will raise and lower the lid correctly too. 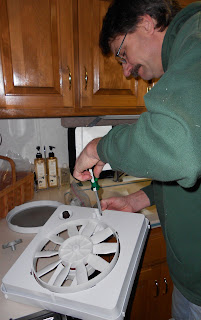 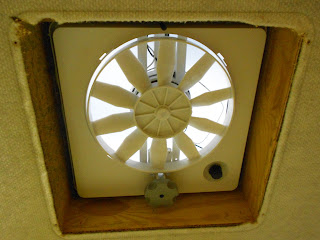 Yup, we got it right, so now we put the ceiling shroud back around the fan with four screws, and put the screen piece in place.  It's pretty quiet compared to the jet engine noise of the old one.  I think I like it. 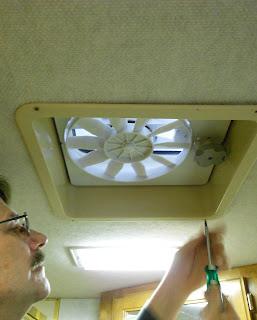 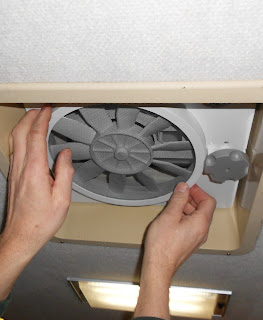 And there you have it---  Steveio's Vortex Fan Installation! 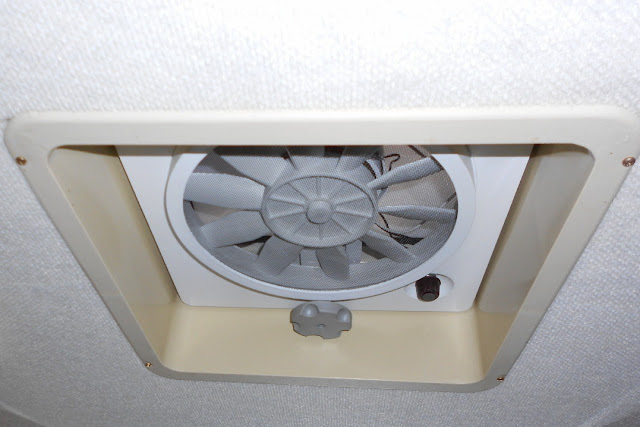 He insists this fan is not for his "bathroom habits" but more for the dogs' comfort.  If we leave the dogs inside the rig when going somewhere in the toad, we keep the windows shut but leave the top roof vents open.
When we leave the rig, the dogs are closed into the back portion of the motorhome which consists of the bathroom and bedroom.  So the Fantastik Fan in the kitchen really doesn't do them any good back there.
The dogs lay on the cool bathroom floor or sprawl across the bed.  They have access to their water and food dishes.  We have video taped them just to be sure they are behaving themselves when we leave them alone.
Also, we turn up the tv volume or play music on the MP3 player to drown out any outside sounds. This prevents them from hearing outside noises to bark at.  Being a good neighbor while staying in campgrounds is a must, and being subjected to the incessant barking of someone's pet locked up in a rig all day can be very upsetting.   We hate it when we are on the receiving end of a noisy dog, so never want to impose our dogs on someone else.
Having the fan running will suck out the heat and move the air according to Steveio, and making the dogs more comfortable.  Okaaaaayy......  so he got his fan!


Mel, the Motorhome Guru asked a few more questions----
I suppose I should add that info to the blog post too...
I bought it from an Ebay seller
http://www.ebay.com/sch/oem_rvparts/m.html?_nkw=&_armrs=1&_from=&_ipg=&_trksid=p3686
called oem rvparts
I paid $46.50 and $14.50 shipping for the one speed one
the 3 speed is $86 plus shipping
I am not sure of the draw on the amps, but we will see once we are in the rig for a day or so and run the different speeds and check the meter on the Trimetric readouts....
Posted by KarenInTheWoods at 11:52 AM